One of my vinous highlights of the year has been joining the Mystere Wine Club in Cardiff. This has led to me attending many a fine wine tasting during the year, with lots of interesting opinions as to the merits or otherwise of such wines. Highlights have included tasting of Toro wines (a revelation to many), 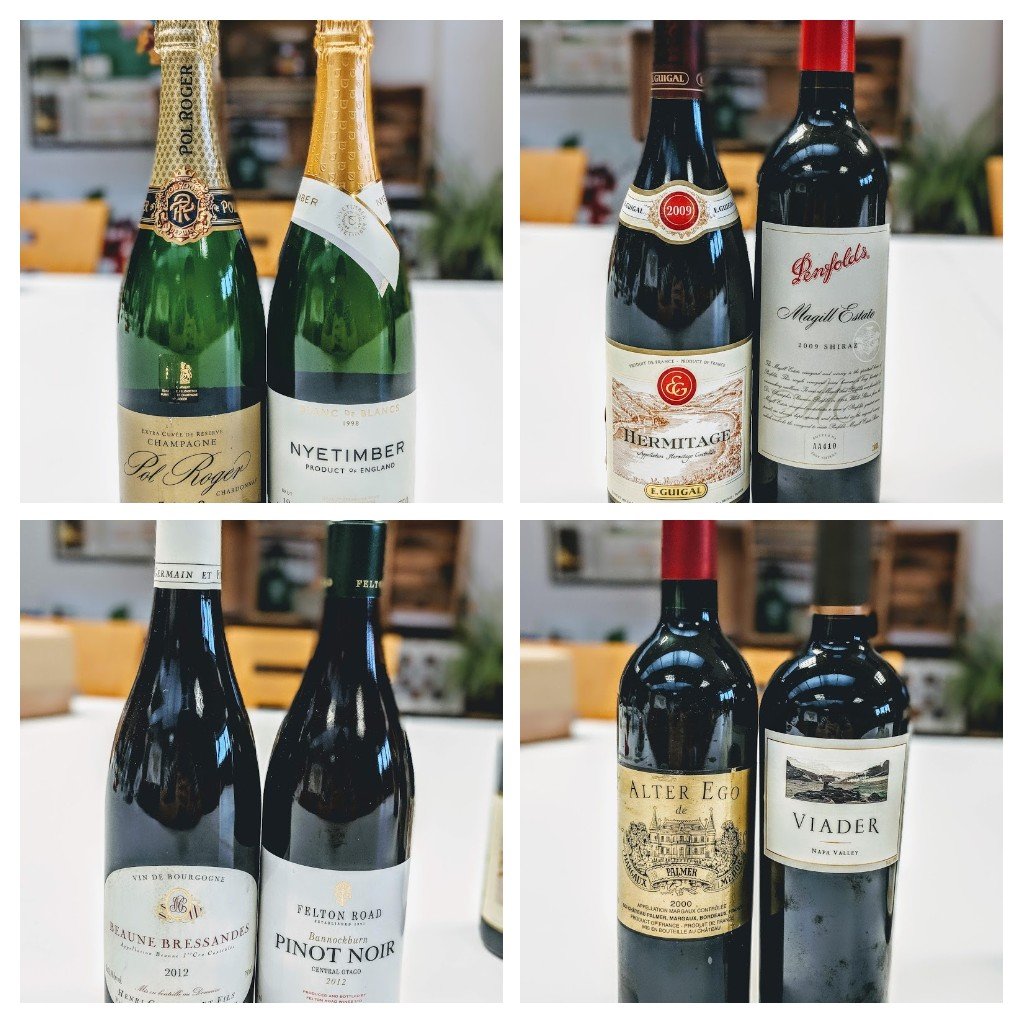 Brunello wines (my first real deep dive into these wines)

and 2005 Clarets (one of the standout vintages of this century).

to name but a few.

The club has a annual dinner and this year it was decided that the venue would be the Parkhouse Restaurant & Bar in Cardiff. A nature choice, perhaps, based on their rather stellar wine list (it having won the AA Hospitality Awards 2018-19 for the best wine list in Wales and the UK as whole). This was my second visit, in November, to the Parkhouse having already been there for their Grant Burge Dinner (some truly fabulous wines from that Aussie powerhouse producer were drunk that night) at the start of the month.

The wine with this dinner were chosen by the Parkhouse, with an Italian wine/grape theme (plus bubbly) so until we arrived it was all a bit of a “mystere” as to what they would be. A brave move bearing in mind the club has a rather large and very nicely stocked cellar of wines and a membership not afraid to speak their minds as to the merits or otherwise of wines 😁.

We had a private room downstairs, in what use to be the Vanilla Rooms. Nice space for a private event I thought. 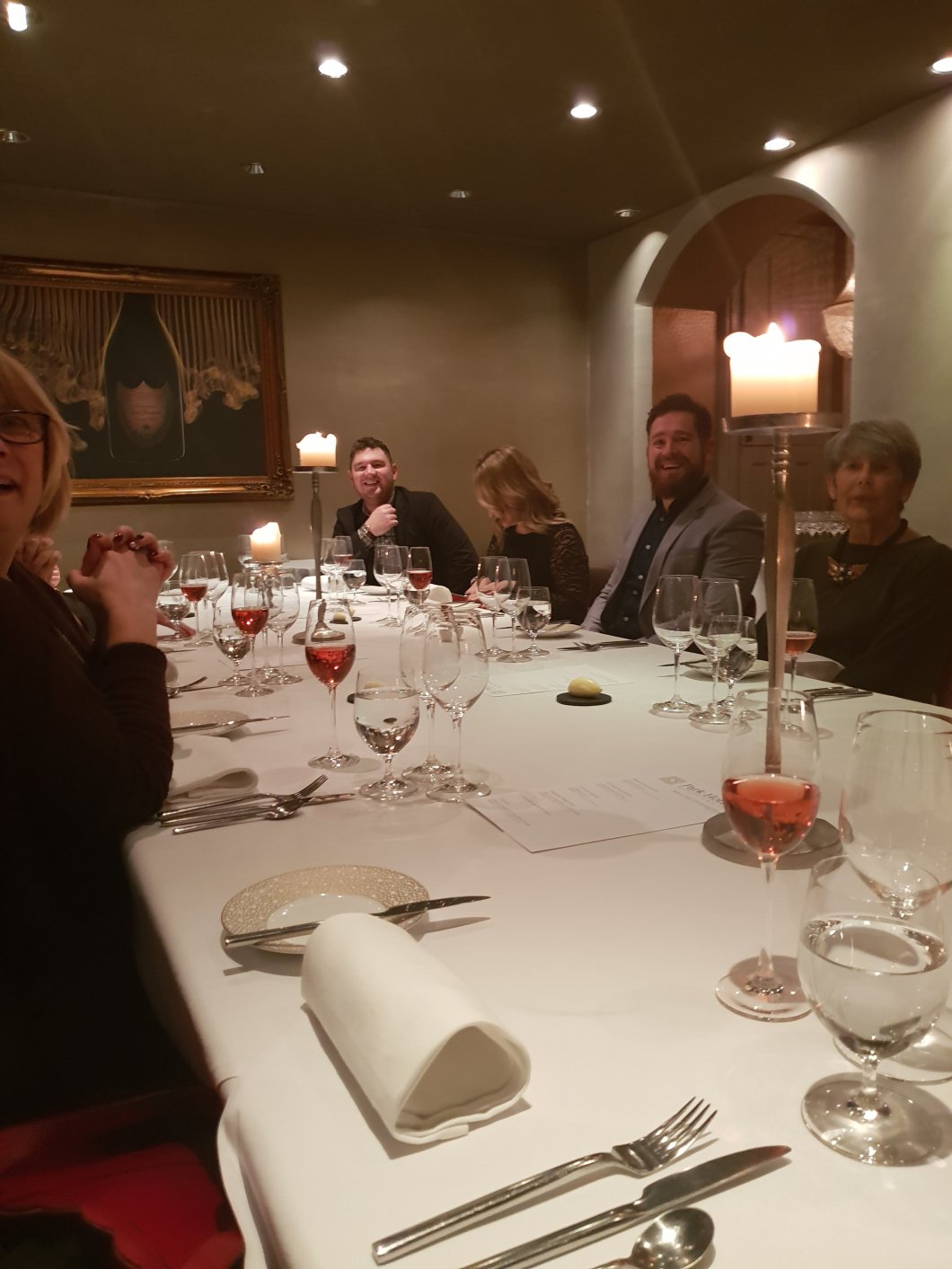 I rather wish my departmental office Christmas party was here, but alas it is not to be despite me dropping numerous hints (all of which fell on deaf ears).

The menu looked rather fine with a nice mix of dishes

As mentioned before this is the second time I have eaten at the Parkhouse since Matt Waldron took over the reins as head chef. Mr Waldron has some pedigree in the chef business having work at a number of high end gaffs (including with Hélène Durroze at the Connaught, when it got its second Michelin Star, and Gareth Ward at Michelin starred Ynyshir) so the food offering should be very good.

The first meal, at their Grant Burge dinner, was mostly “hit” on the food and wine fronts (all the wines were excellent) but a couple of dishes failed to wow (the Himalayan salt aged beef and the pork belly and seaweed dishes being the ones that disappointed), with perhaps the chef still finding his feet in a new kitchen and with a new brigade at that point. Still, with 8 stellar wines (some well North of £100 a bottle retail) and 9 courses for £99, it was certainly great value for money.

This second event was a bespoke event for the Mystere Wine Club members and being much later in the month it was, in theory, at a time after which any teething issues should have been ironed out in kitchen (dishes refined etc.).

We started off with some decent amuse bouches. Crisp cones with a filling of a smooth chicken liver parfait hit the spot nicely. The cheese gougeres were pleasant enough, but could have been a touch cheesier. Bit too delicate for my jaded palate perhaps.

We also had some wagyu pastrami – very nice with the mellow fat adding a rich beefiness to the peppery flavour (no picture as forgot to take one before shoving it in my greedy gob).

As we nibbled on these, we had a glass of Taittinger Prestige Rosé (£79 per bottle on the list at the Parkhouse).

A rather fine fizz , with a velvety smooth mousse and lovely flavours of fresh summer fruits. A very pleasant appertif (this from someone – me – who is not a big fizz fan).

The first full course from the menu was a light mushroom espuma. I had already dug into mine before I took a picture, unfortunately rather ruining the aesthetics of this dish.

Whilst it all looked a rather uniform beige, the flavours were certainly there with a subtle earthiness from the uber light mushroom espuma. Adding nicely to this were a liberal sprinkling of pickled mushrooms (buried in the interior) which brought a light acidity to the dish.

This dish was paired with an Australian vermentino (£48 a bottle on the list, £15 retail – mark up a little steep I would argue) – an Italian (Sardinian) varietal now finding favour in the New World.

Very nice, easy drinking wine this, with fresh initial floral flavours and citrus then coming through. On the palate there were some pleasing apricot notes, with citrus and apple sitting there in the background. Not one I would have thought to pair with the mushroom dish, but it worked very well.

Next up was a really good Jerusalem artichoke dish (which seemed to have been refined from the version I had at their Grant Burge dinner).

It came in two distinct forms, with a smooth as a baby’s bum puree and delicate crisps. Both packed a real flavour punch (I am finding Jerusalem artichoke increasingly to my liking these days, which is lucky as it seems to be a very in vogue ingredient at the moment ). A oozey confit duck egg yolk and a liberal sprinkling of crisp, salty, chicken skin dialled it all up another notch on both the flavour and texture fronts.

The wine pairing here was a lovely number from Cai dei Frati in the Lugana DO – to the South of Lake Garda (£13.95 retail – can’t find it on the Parkhouse list). Made from 100% turbiana grape (indigenous to the area) it had a lovely pale straw colour and a touch of Loire (Sancerre) Sauvignon Blanc about it on the nose, followed by citrus and peaches. On the palate, it was very refreshing with stone fruits and almonds and finishing with a nice touch of minerality. Lovely zippy wine which was a fine pairing with the Jerusalem artichoke dish.

The fish course was probably my favourite dish of the night 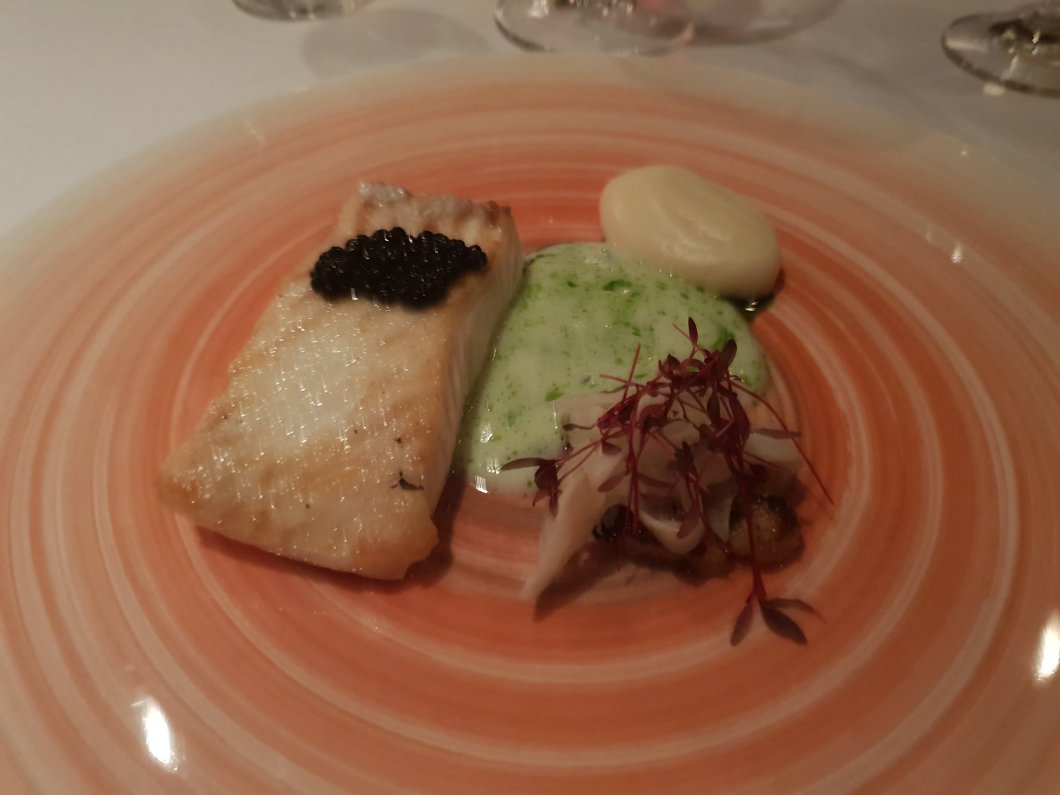 A grand piece of meaty halibut (cooked à point), with a lovely flake to it, was the centre piece. Atop it sat a generous dollop of decadent caviar. The cauliflower was done two ways, with an intense puree and a lovely buttery slice. The cooking of the latter really brought out its natural nuttiness.

The sauce added a nice touch of acidity to the dish. Really, really nice dish this.

The wine pairing with this was a bit of a surprise. Not only a red (contrary to popular belief – I am looking at you Mr. Bond – quite a lot of, usually lighter, reds go well with certain fish), but a Puglian one (an area in Italy not exactly renowned for its light reds – with a lighter red like a pinot noir or a Beaujolais generally being my choice if going with a red with fish). Here the grape was an unusual local one in the form of Susumaniello (translates as little donkey in the local dialect)

This wine (£15 retail) had quite intense aromas of blackcurrant (almost crème de cassis), followed up with wafts of Mediterranean herbs. The fruit theme carried through on the palate and I was more than little worried that it would simple overwhelm the fish. I was, however, pleasantly surprised at how well this worked with the halibut (which more than held its own). The lack of tannins in this wine assisted greatly, as did the accompanying vegetables, in terms of the pairing here. Again not a wine I would have thought to pair with this dish, but I was rather surprised as to how well it worked.

The final savoury dish was a Highland wagyu sirloin steak dish, something that I have not eaten before. Melt in the mouth tender, I thought this was a very tasty, well seasoned, piece of meat. Cooked on the money for me, with a beautifully caramelised crust and a ruby red interior.

What was lacking (other than a smidgen over the accompanying veg.) was the advertised bordelaise sauce. Personally I like my steak unadorned (sauce wise) so wasn’t that bothered, but if you advertise it as being on the plate it should be there in more quantity than a dribble.

An accompanying dish, served with the steak, was a rather up market cottage pie. This contained rich and deeply flavour beef shin and was topped with an airy mash and grated pungent earthy truffle on top.

Good dish, but a shame about the somewhat minimalist bordelaise sauce.

The wine pairing for this was another interesting number, this time from Sicily.

From young (planted only 5 years ago) vineyards located in the uplands surrounding around Lake Arancio in in southwestern Sicily, this nero d’avola wine (around £11 retail) had a pleasing nose of red and black fruits, with some spice. On the palate the black fruits and spice were to the fore, which made it almost reminiscent of a New World shiraz. Nice wine this, with the beef, I thought.

A palate cleansing pre-desert followed. A very sharp blackcurrant sorbet (I like sharp stuff, but this was a little too searingly so even for me) was blanketed rather prettily with a champagne foam.

The final dish was one that had me intrigued based on the reference on the menu description to pulled chocolate (in my book you can pull someone’s leg or a pork shoulder and that is pretty much it). Here it seemed to be a reference to the tempered chocolate element of the chef’s riff on a good old fashion tiramisu.

Lovely dish this, with cubes of intense coffee jelly and honeycomb hidden is a mascarpone granita and lots of glossy tempered (the pulled bit) chocolate. I am not a huge fan of deconstruction/mucking about with classics in cookery (if it ain’t broke…..), but this dish was a belter.

The wine chosen to go with this desert was also rather good. A red, sweet, wine in the form of a Reciota della Valpolicella (made with dried – passito – grapes) from Tesauro (about £19 retail for 50cl bottle).

It had lovely, rich, sweet, black cherry and spice on the nose and palate. Great with the tiramisu and a very pleasing wine to finish off a rather fine evening.

I really enjoy our club dinner at the Parkhouse. We managed to get a private room, a rather good 5 course meal (with amuse bouches and a pre desert), 6 very nice and interesting wines (including a glass of proper quality fizz, rather than a piss poor prosecco, which seems to be the standard these days as an apperitif) for £79 a head (plus a tip). For what we got this was a very fair price I thought. As a three course meal + wines at Jamie’s (yuck) could set you back as much as £65 plus for their Christmas feast 🙄,

if you add a further 5 glasses (of not as nice stuff) of wine, the Parkhouse offering starts to look very good value indeed.

A hard-core few club members (including me) went up to the bar and shared a bottle of Fierce Allure, a cab. sauv. wine from trendy producers, Some Young Punks (£49).

I thought the package as a whole for a private dining event was really good value and with good company made for a rather nice evening. Good venue for a private party and my lobbying efforts for my department’s financial year end party will start early next year.