Stairway to “curry” heaven? The Indian Upstairs, The Karavan@No.5. UPDATED MAY 2019

The Karavan is no longer at this venue, but can be found in the evenings as the Crafty Cellar in Penarth (Windsor Road). 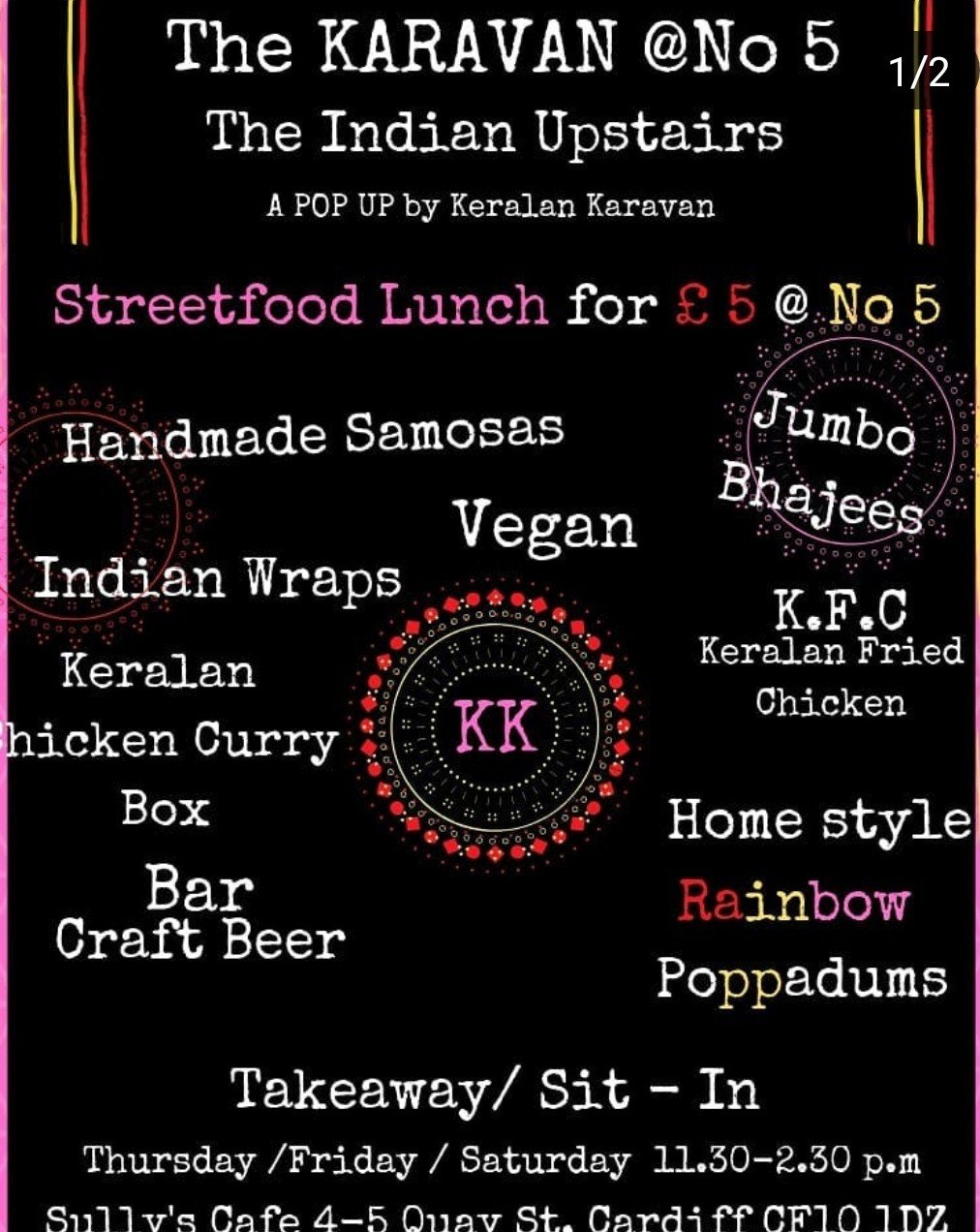 “The Indian Upstairs” sounds like one of those dodgy 70s/early 80s sitcoms that nobody would dare to air these days. It is, however, a new venture from the guys from Keralan Karavan – purveyors of superior Southern Indian cuisine.

Last seen (other than in one off pop ups) in residence at the now defunct Small Bar (taken over by Crafty Devil in the form of Beelzebub, who decided to take the food offering in a different direction), the Southern Indian food that Keralan Karavan champion has been sorely missed in Cardiff City centre.

I was, as a result, more than a little happy with their reappearance above (hence “The Indian Upstairs”), city centre greasy spoon, Sully’s 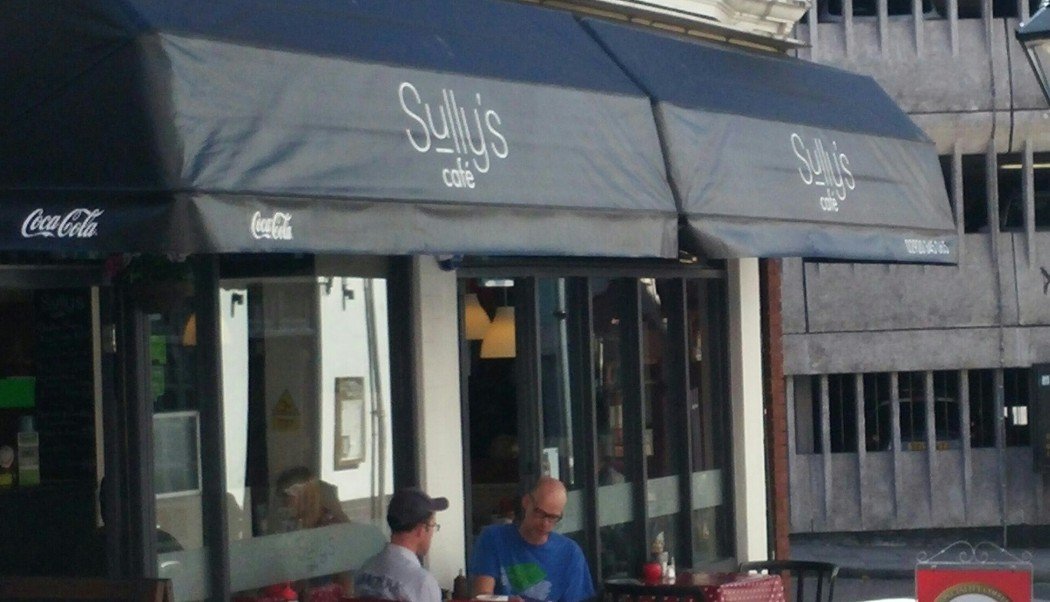 Sully’s have form in maximising usage of their plot with it being the evening haunt of Blue Honey Night Cafe and it is nice to see them allowing the unused space upstairs to be taken over by the KK chaps.

It is not that easy to find, with no signage outside of Sully’s and as you walk in people are tucking into greasy spoon classics rather than Southern Indian food. We had to enquire as to “the Indian” and were directed to the stairs on the left hand side of the door to the toilets.

Wandering up we were given a warm greeting. There are plenty of chairs and tables up there, as well as stools for solo dining. 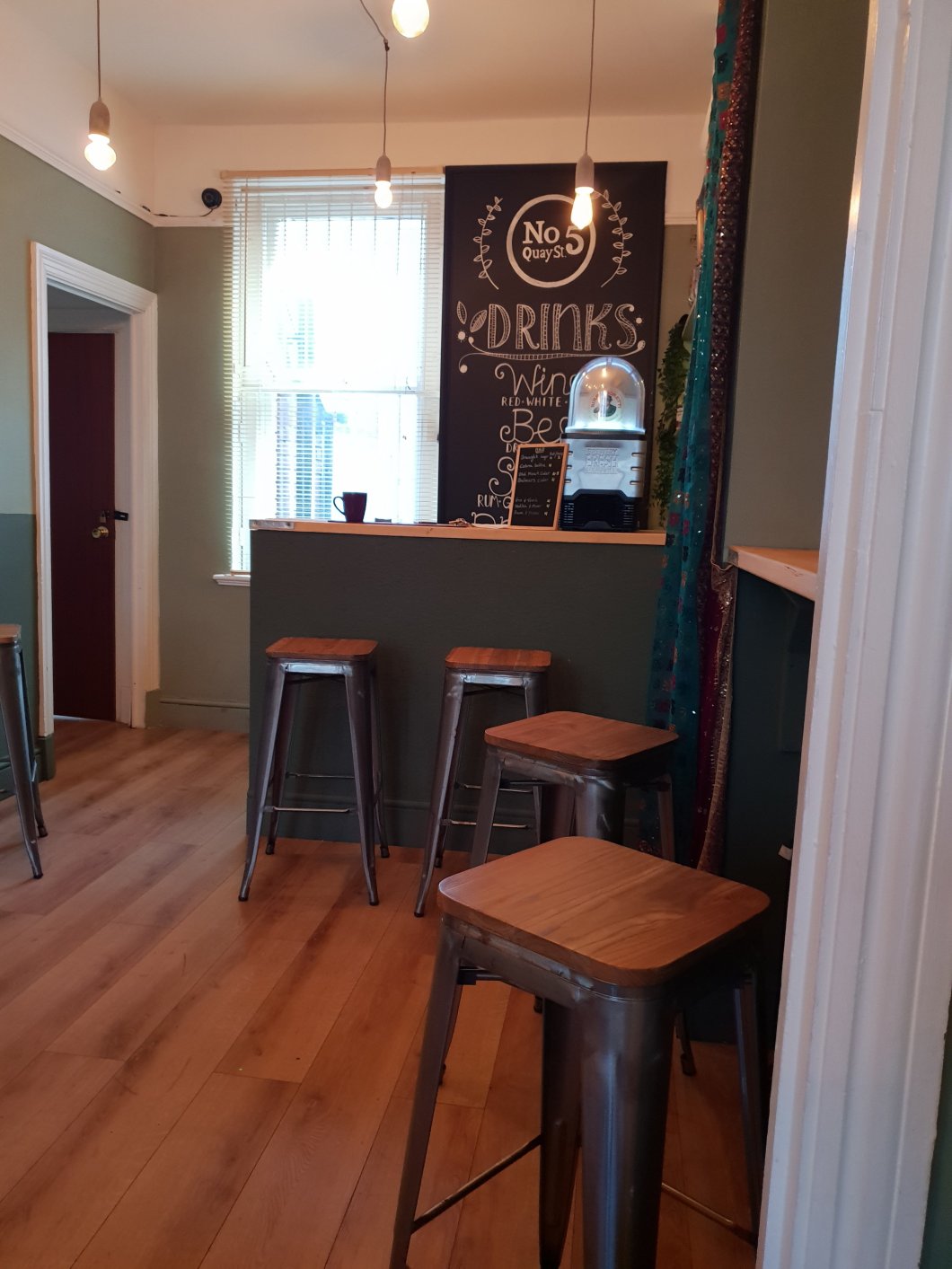 Chatting to the people running it, they are set there for at least the next couple of months with the ambition to stay longer.

The menu is a work in progress with the promise of stuff like railway curry (love mutton in a curry, actually I just love mutton) and (a favourite of mine) fish head curry (cue people going ewww, but don’t diss it until you have tried it) being added.

As it currently stands the menu already looks pretty good, with a mix of larger “box” items and more snack based dishes to eat in or take away. From their Small Bar days and before, I have always been a big fan of their K.F.C and bhajis and the “Wrap N Roll” also looked very nice and pleasingly priced at £4.

On a cold midweek day my friend and I were, however, looking for something more substantial from off the menu.

I went for the Keralan chicken curry box, which was a heady coconut infused number heavy with spice (cardamom and coriander amongst many others I suspect) rather than heat (I was offered the option of mild medium or hot and went for the medium – if you like a bit of heat go for hot as the medium was easily negotiated even by the chilli wuzz I am). Really satisfying winter dish this, with use of the better flavoured thigh (rather than breast) meat of the chicken, a lovely spicy gravy/sauce and crispy shallot on top. 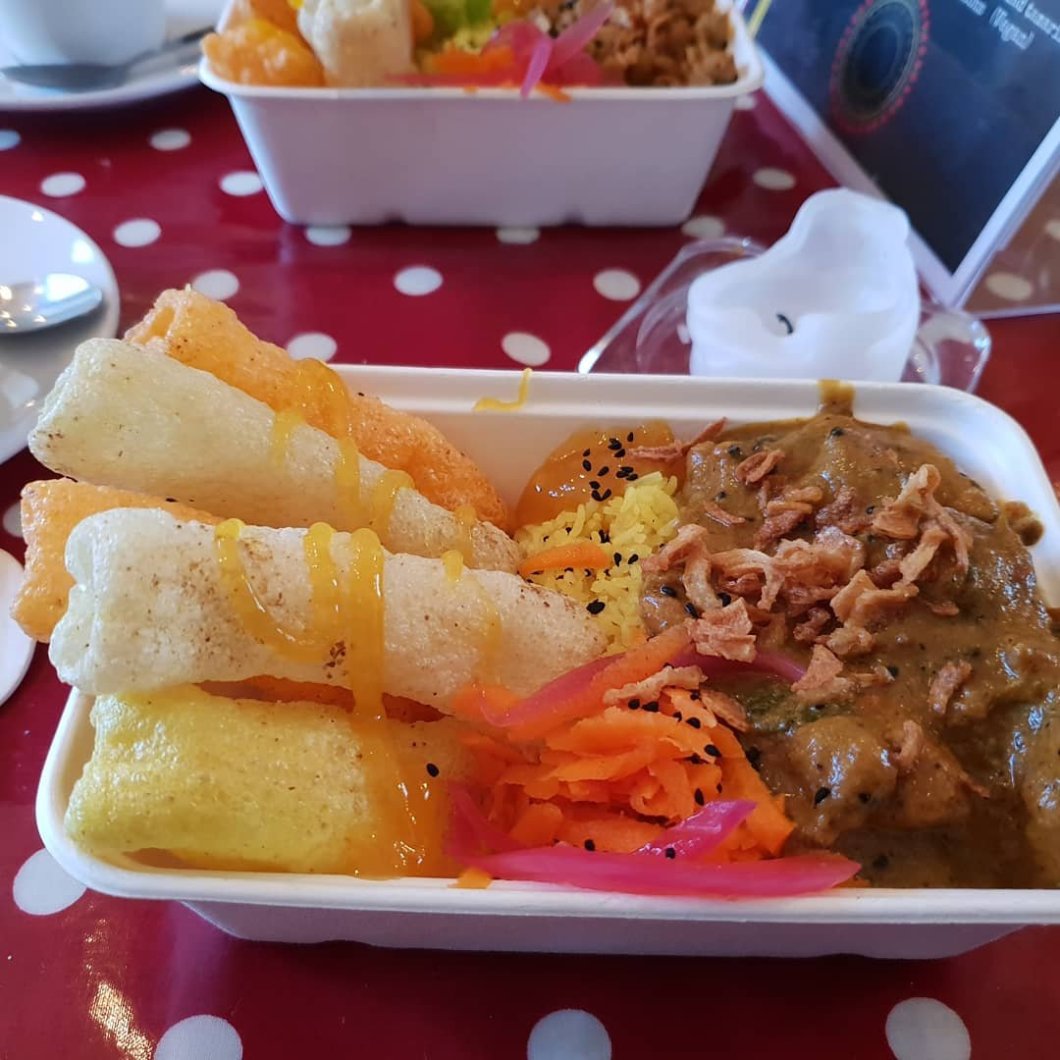 It came with their signature funky rainbow poppadums, which had a nice sweet and slightly spicy mango chutney slathered on them and on the side.

The rice was a lovely vibrant yellow from the addition of tumeric (that supposed super food) and cooked just right so that the grains were separated and had that nice nuttiness. Not entirely sure what the reference to kewara in terms of the rice was, but assume it is a reference to the extract from the panadanus plant (often used in South East Asian cooking). I know this as kewra (but could be completely wrong – often am). Something certainly gave the rice a nice fragrance, so may well have been that.

The final side was a rather nice and very refreshing salad of pink pickled onion and pickled carrot, both of which bought a nice bit of acidity to proceedings.

Size wise my “box” as a whole was very nicely proportioned and good value for £7. Easy to eat in or take away (with a lid presumably added to the box for take away).

I polished it off in double quick time.

Much to my surprise my friend ordered the vegan chickpea curry (£6). From my many meals with this chap I can’t recall him ever ordering a veggie, let alone a vegan, dish. 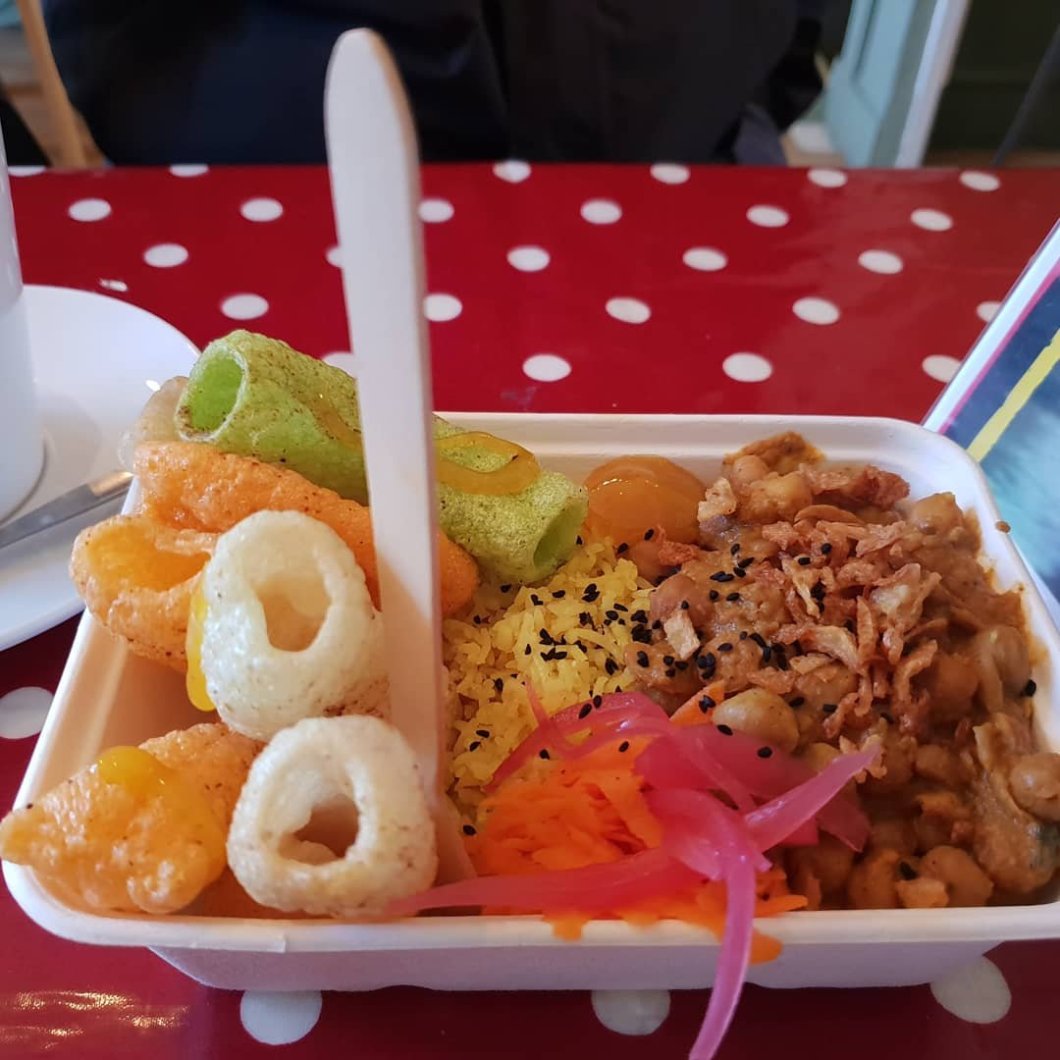 He said it was very nice, with the chickpeas (hideous if undercooked and a mushy mess if overcooked) cooked on point and the dish as a whole full of spice driven flavour. He was equally as enamoured with the rice etc. as me.

Both of us really enjoyed our curry at this place. Perfect stuff on a cold winter day.

On the drinks front they have plenty of booze on offer

which seems to cover all bases.

Personally I am a big fan of sherry or Montilla- Moriles (the other place) wines with curries. I reckon an amontillado or a palo cortado would work well as a pairing with the two curries we had.

I picked the one above up from Curado Bar and think for these sort of curries it would work a treat. May try it with a homemade Keralan chicken curry. A riesling or a grüner veltliner would also work well with these sort of dishes.

As it was a work day lunch we eschewed the booze and asked if we could have a hot drink. This request was obliged by them nipping down stairs to Sully’s to get one of their standard coffees. A nice idea going forward, perhaps, would be to have some masala chai and other soft Indian drinks (hot and cold) on the menu.

I really enjoyed the food at “The Indian Upstairs” and it is nice to see the KK boys back in town doing what they do best.

The food was great, with the beautiful flavours that we know and love from properly done Southern Indian food.

A cracking addition to the lunch time scene in Cardiff’s City centre and long may it last.

Would I go back? Definately – lovely stuff already and I am looking forward to the menu developing. The lunch offering in the city centre just keeps on getting better and better.

I do think they need a bit more prominent signage to draw the punters in, as unless you are on social media (many wise people aren’t) you are unlikely to be aware of this place evening if walking past Sully’s.