Dinner with one of Italy’s true greats – Antinori dinner at Heaney’s Cardiff.

Readers of blog will know I take the seemingly unusual approach (not sure why it is so unusual) of commenting on both the food and the wine/drink (let’s be honest it’s usually wine) when I eat out.

For me a good wine makes a meal and good food invariably makes a good wine even more pleasurable. If I go out for dinner I feel somewhat bereft if I can’t have a good wine with it.

To my mind there has been few more pertinent turns of phrase than that of a Frenchman named Brillat-Savarin who said ” A meal without wine is like a day without sunshine” or as I like to call it ” breakfast”.

As a result I love a wine dinner and a tweet from Heaney’s (one of my favourite places to eat in Cardiff) regarding a wine dinner featuring the wines of the Antinori family from Italy (a truly iconic wine producer) really piqued my interest. A table were duly booked.

Despite pestering from me on twitter, the menu and wines were kept under wraps. Quite liked that as it was all a rather nice surprise, but suspect others may have been put off by not knowing what they would be getting in advance of booking (with a £20 deposit per diner required and £75 balance payable on the night).

Both J (deputising for the working Mrs. SF and as part of her ongoing wine education – progress definately being made and I regard it as a milestone achieved in having got her to start buying franciacorta) and I were very happy with the look of the menu.

I was, certainly, delighted to spy a few bottles of the iconic (super Tuscan) Tignanello and a 2015 (a super vintage in Tuscany and the whole of Italy) to boot 😍.

After a nose through the new revamped and very nice looking wine list (put together by Brian Howells of Berkman wines – a regular at Mystere Wine Club tastings), our table beckoned.

set us up nicely for the main event. Luca also provided details of all the wines during the evening and proved a font of knowledge.

The first of the amuse bouches was a Heaney’s classic in the form of oysters with yoghurt and an apple granita.

Wonderfuly refreshing, with a nice contrast of briney saltiness, sweet apple and sour yoghurt. Never fails to please this dish.

A second tranche of the amuse bouches bought a medley of meaty morsels.

A burnt pear puree (sweet, but with just a touch of bitterness to take the edge off the sweetness) sat atop a pig’s head croquette. The crisp coating giving way to melt in the mouth pig’s head meat – this was pigginess to the max.

On the same plate was beef tartare on game chips. Top notch meat was complimented by a tabasco rich concoction that gave more than a nod to a bloody mary. Seriously posh beef crisps these.

With the amuse bouches we had an Italian fizz.

Not the uniqutuous prosecco, in this instance, but a superior franciacorta (with the bubbles coming from use of the Méthode Champenoise rather than cheaper Charmat “in the tank” Method as is the case with prosecco) from Lombardy in the form of a Donna Cora Satén 2011 (100% chardonnay – retails at £30 plus a bottle).

Whilst I am not a huge fizz drinker, as the bubbles tend to play havoc with my digestion (age is a terrible thing), this was really rather fine stuff with (as the Satén name suggested) a very smooth, light mousse (achieved by a bottle pressure of only 3 rather than the more normal 5 atmospheres in most fizz).

It had lovely floral aromas, with white fruits (apple and apricot) and then citrus coming through. Very pleasing stuff on the palate too, with peach really coming though.

Cracking start on both the wine and food fronts.

Next up was another firm Heaney favourite, in the form of cured monkfish, with an invigorating horseradish sorbet

The fish had a meatiness to it that was complemented by the horseradish (which was not too nasal blasting in nature). The grapes added a nice bit of sweet to compliment the horseradish heat and the pumpkin seeds brought a pleasant nuttiness (very underrated things pumpkin seeds, as is the oil) and textural contrast to the proceedings. Clever stuff.

The monkfish was paired with an excellent rosé, a guado al tasso scalabrone, from the Bolgheri region in Tuscany (retails at about the £18.50 mark). A blend of syrah, merlot and cabernet franc, it was surprisingly delicate stuff.

A light peony in colour it gave off fresh aromas of raspberry and cherry, with a long fruity finish on the palate.

Excellent with the monkfish, I thought.

Another fish course followed and I thought this one was the dish of the meal.

Chalk stream trout seems to be on every self respecting top notch restaurant’s menu these days and I can see why as it is fantastic fish.

Here it was cooked confit, so it had an almost buttery texture that just melted in the mouth.

With the intense flavours of the trout dish a punchy wines was required and we were duly obliged on this front with a lovely white.

From the Maremma region on the Tuscan coast, in the form of La Mortelle Vivia, this wine is a blend of vermintino (a firm favourite white wine grapes of mine) and voignier (around £18 retail). 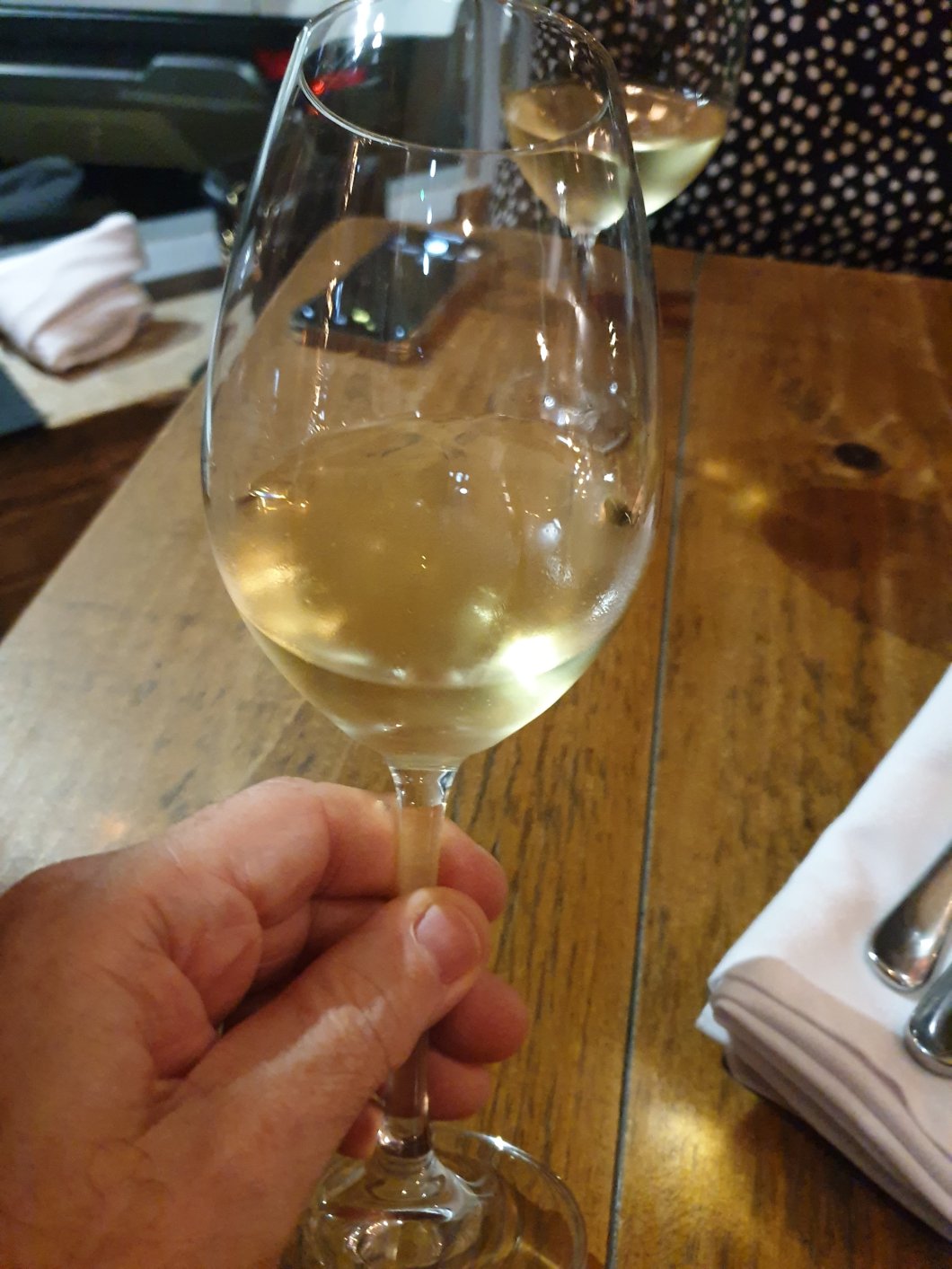 Lovely aromas of peach and melon wafted up from the glass, followed by tropical fruit (pineapple) and citrus. On the palate there was a very pleasing creaminess and minerality. Nice finish, as it lingered, of Provence herbs and citrus.

Worked a treat with the trout and crab.

Another fish dish next, not that I was complaining as Heaney excels in cooking fish.

This time hake, a fish I have a huge amount of time for and one the Spaniards (who know a good fish when they see it) rightly revere.

The fish itself was cooked bang on the money, with a crisp skin and a yielding, just a smidgen past translucent, interior.

The sauce had a lovely rich smokiness to it and the crunchy leeks provided a bit of texture. If I am honest I couldn’t detect the chicken in the mix. Great dish none the less.

Another beautiful white wine came with this dish, a Pietrobianco chardonnay (90% chardonnay, 10% fiano – this wine retails at around the £20 mark) from Puglia (a region in Italy more associated with red wine).

This had clearly had sometime in oak, with a good hit of spice (vanilla mostly) on the nose, followed by citrus and tropical fruit. On the palate there was again vanilla spice from the oak and a refreshing minerality.

Worked well with the hake and, in particular, the sauce it came with.

On to the next course, this was a lovely duo of lamb.

A beautifully tender and blushing pink piece of loin was packed with flavour and surrounded by a rich lamb jus and iron rich rainbow chard.

The second part of the lamb duo was a shredded shoulder atop of which was a fantastically smooth celeriac puree.

The earthiness of the puree worked a treat as against the richness of the lamb shoulder.

For the lamb, the big guns wine wise were rolled out in the form of a Super Tuscan and a Barbaresco from Piedmont. 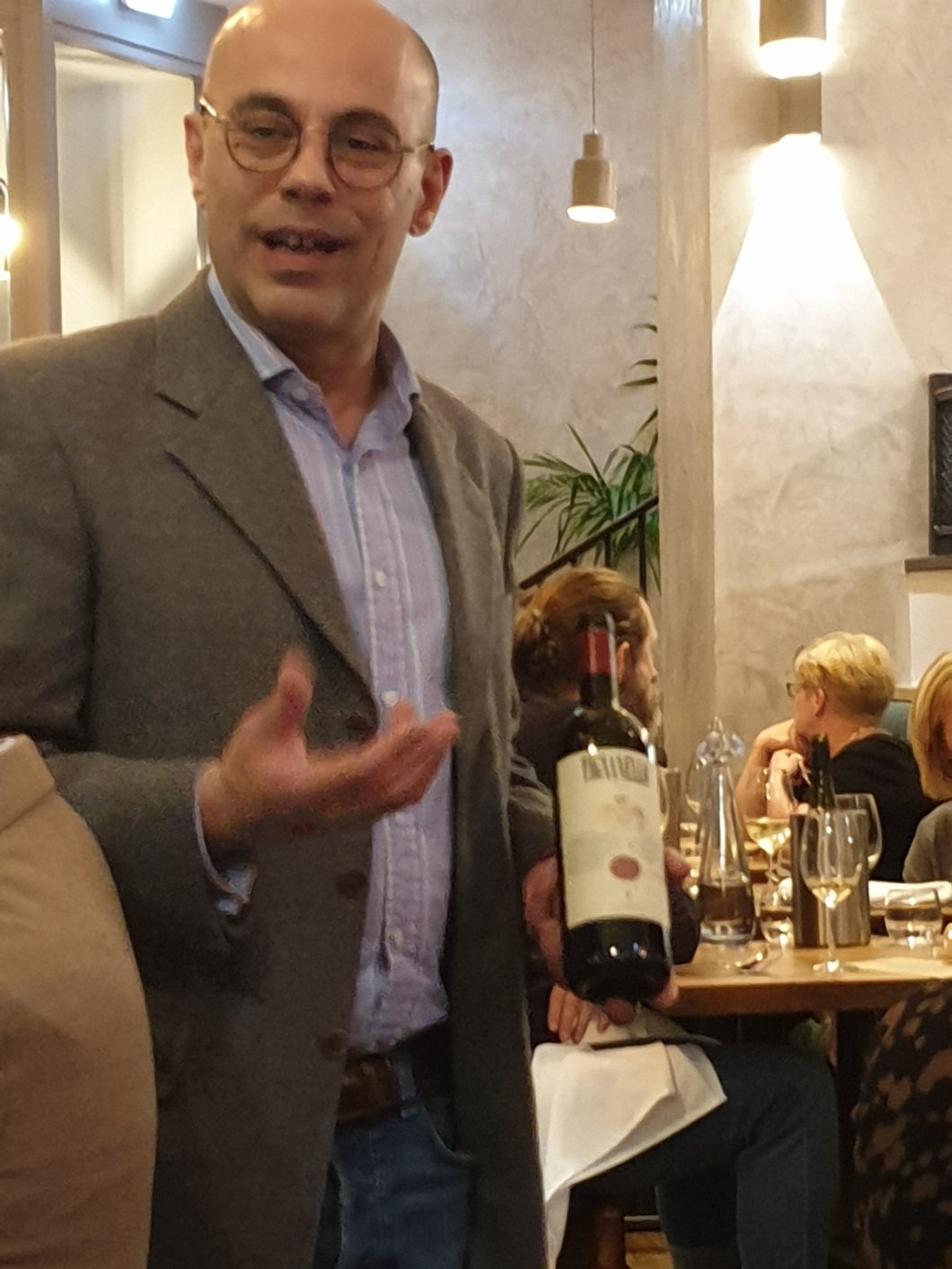 Tignanello is an iconic wine and one that broke the mold in Tuscany. It was the first wine to age sangiovese in barriques and to blend it with international varieties (cabernet sauvignon and cabernet franc). With this wine the so called Super Tuscans were born.

2015 was a stellar vintage in Tuscany (and Italy as a whole) and this wine was an absolute beauty.

On the nose there were dark ripe cherries (from the sangiovese) and then it went big on the blackcurrant and cedar/pencil shavings from the cab. sauv., as well as a touch of tobacco. Seriously alluring stuff!

On the palate there was that refreshing acidity, that makes sangiovese such a good food wine, and more blackcurrant and cedar (from the cab sauv), then cherry from the sangiovese. This was such a good wine and (at least to me) unsurprising that the 2015 goes for over £100 a bottle (if you can find it). A real privilege and rare treat to drink this wine.

We doubled up on the reds with the lamb, with a bonus of a Barbaresco – a Prunotto 2016 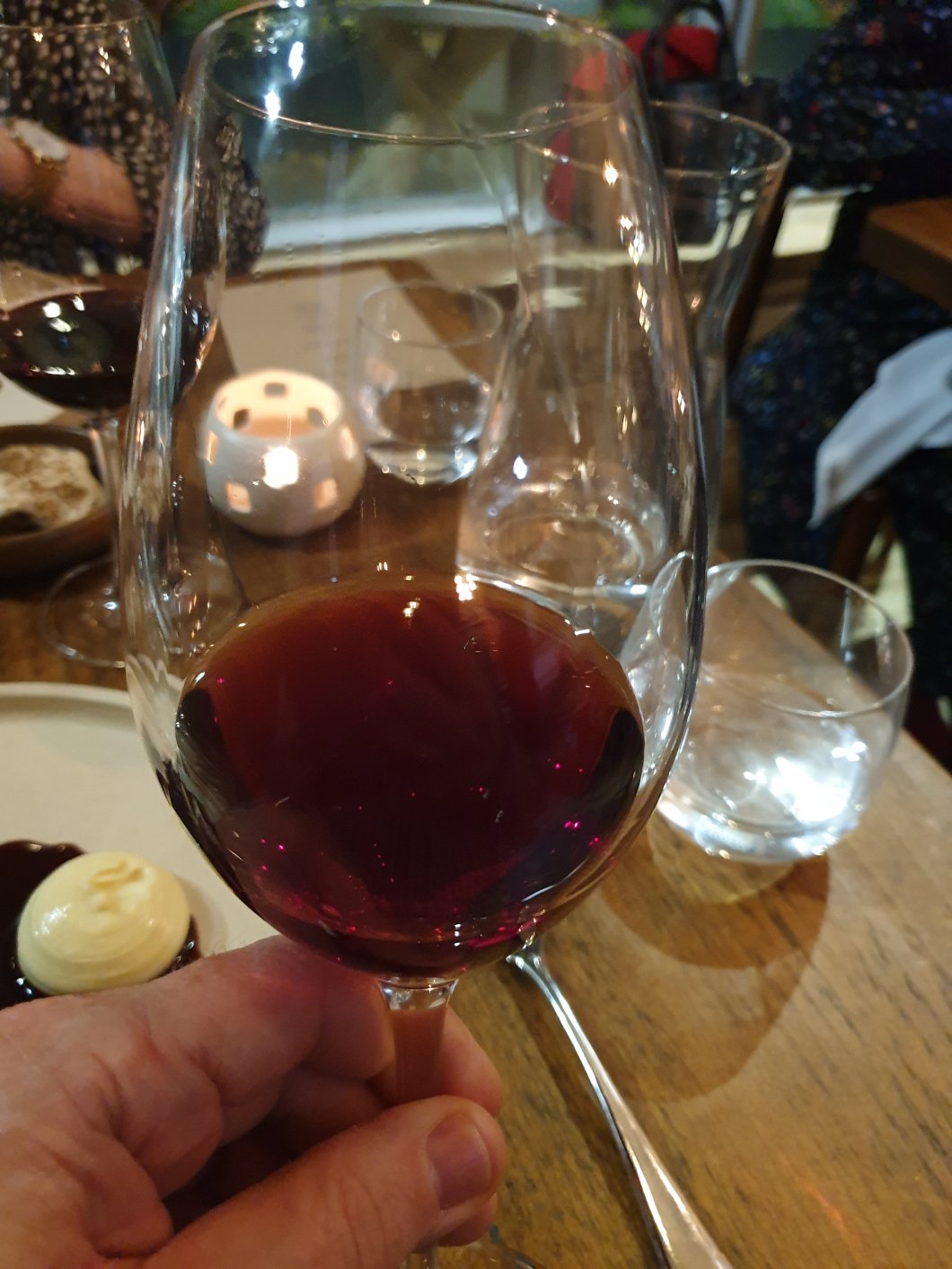 Very pleasant wine (if perhaps overshadowed somewhat by the Tignanello – price wise looking at around £27.50 retail), with dark red fruits, a touch of violet and leather on the nose. On the palate it had a long spicy finish

On to the puds, first up was a two tier dish. On top was a gossamer thin filled tube with dabs of burnt pear puree 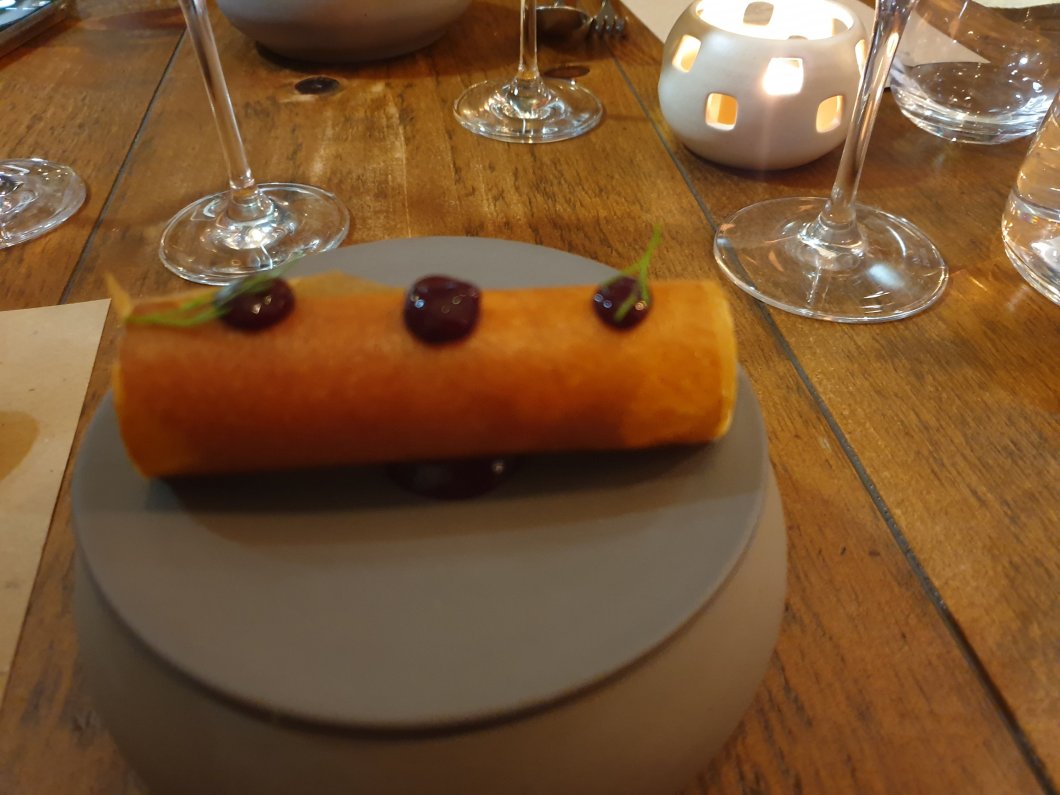 and underneath honeycomb and intense shards of raspberry and blackberry.

The second deserts was my favourite of the two – combining sour calamansi, with sweet caramelised banana, chocolate and hazelnut. 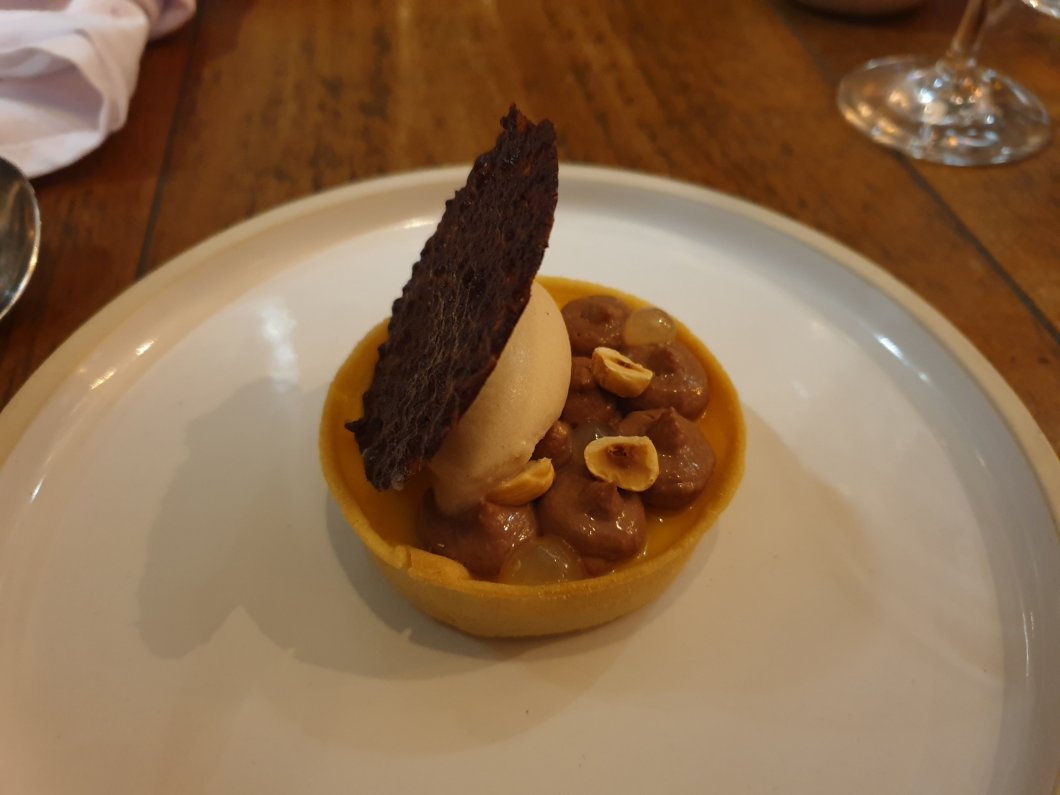 This all sat, pretty as a picture, in an exemplary casing (lovely pastry). Ooh what an absolute tart were my thoughts on this!

The final pairing of the night was another doozy, in the form of a Muffala Della Sala, a sweet wine from Umbria. 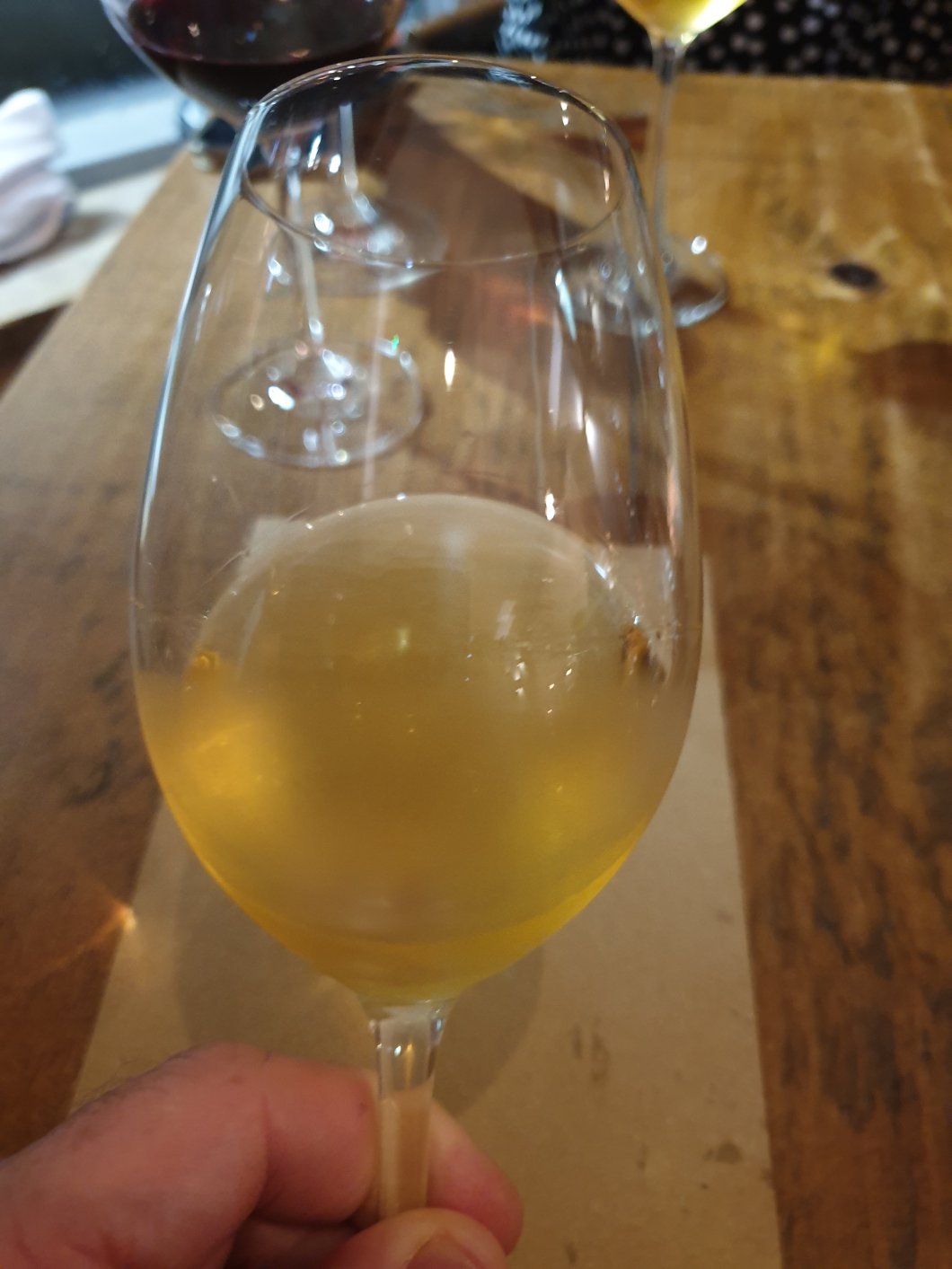 Made from a blend of sauvignon blanc, grechetto, traminer, sémillon and riesling, it had the unmistakable and glorious taint of noble rot.

On the nose it was honeyed and floral, with a surprising freshness. On the platate the sweetness to tempered by beautful citrus notes, which keep it fresh rather than cloying in nature.

Gorgeous wine (talking £35 for a 50cl bottle retail) this, which was fantastic paired with the tart. Great way to end a fabulous meal.

Absolutely lovely wines, which worked brilliantly with the very clever food pairings made for a very fine evening.

Really great to be given the chance (at a very good price – with very generous pours of the wines) to try some really good wines from a producer at the top of their game and to try, in the case of the Tigenello 2015, a truly iconic wine (that is nigh on impossible to get at a reasonable price i.e. under a ton).

With the quality of the food and the wine, the price £95 (we paid an upfront £20 deposit and £75 on the night) was a actually a bit of a bargain.

I certainly hope this is not a one off at Heaney’s and that there will be more wine dinners in the future.

Heaney’s top draw cooking with top draw wines is certainly a heady combo in my opinion.

The revamped wine list at Heaney’s is also well worth a look through, with some really nice stuff on there (lots of interesting corovin goodies).

If you are interested in buying any of the Antinori wines (you should be), Viader Vintners can get all of them (and more, other than the Tiganello 2015 – they do have the probably as good 2016 though if you get in quick as by allocation only) for very reasonable prices (as well as lots of other wine goodies).

J and I have put in and received our orders already. 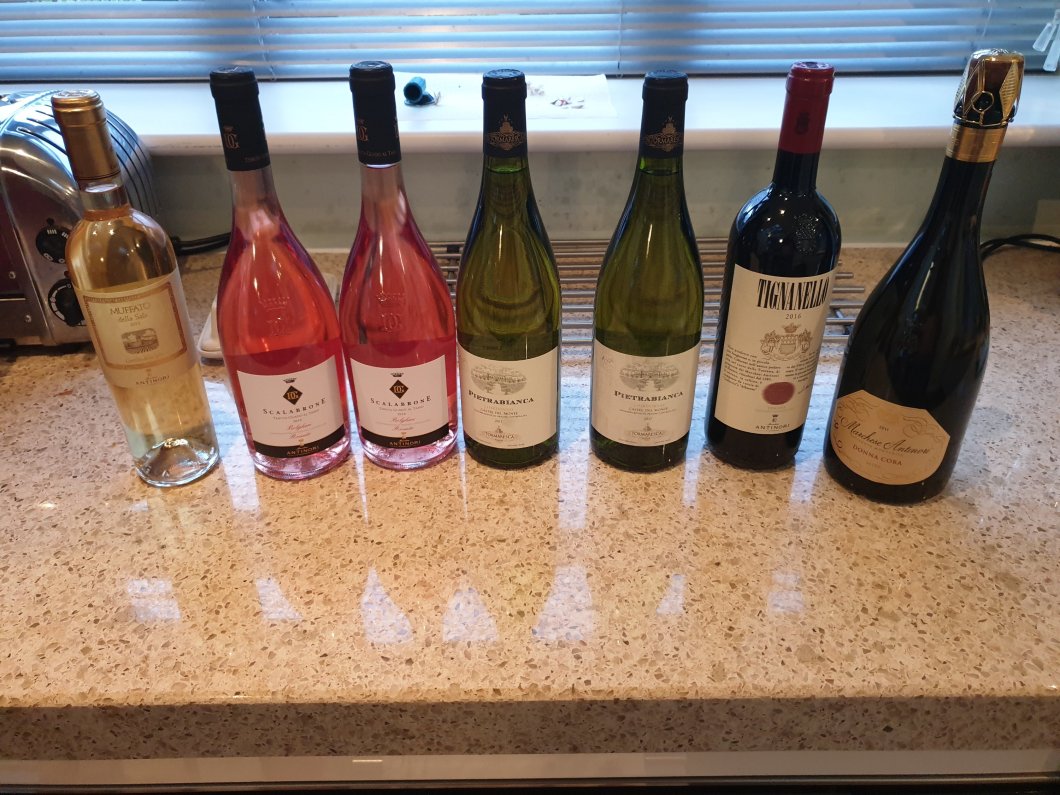