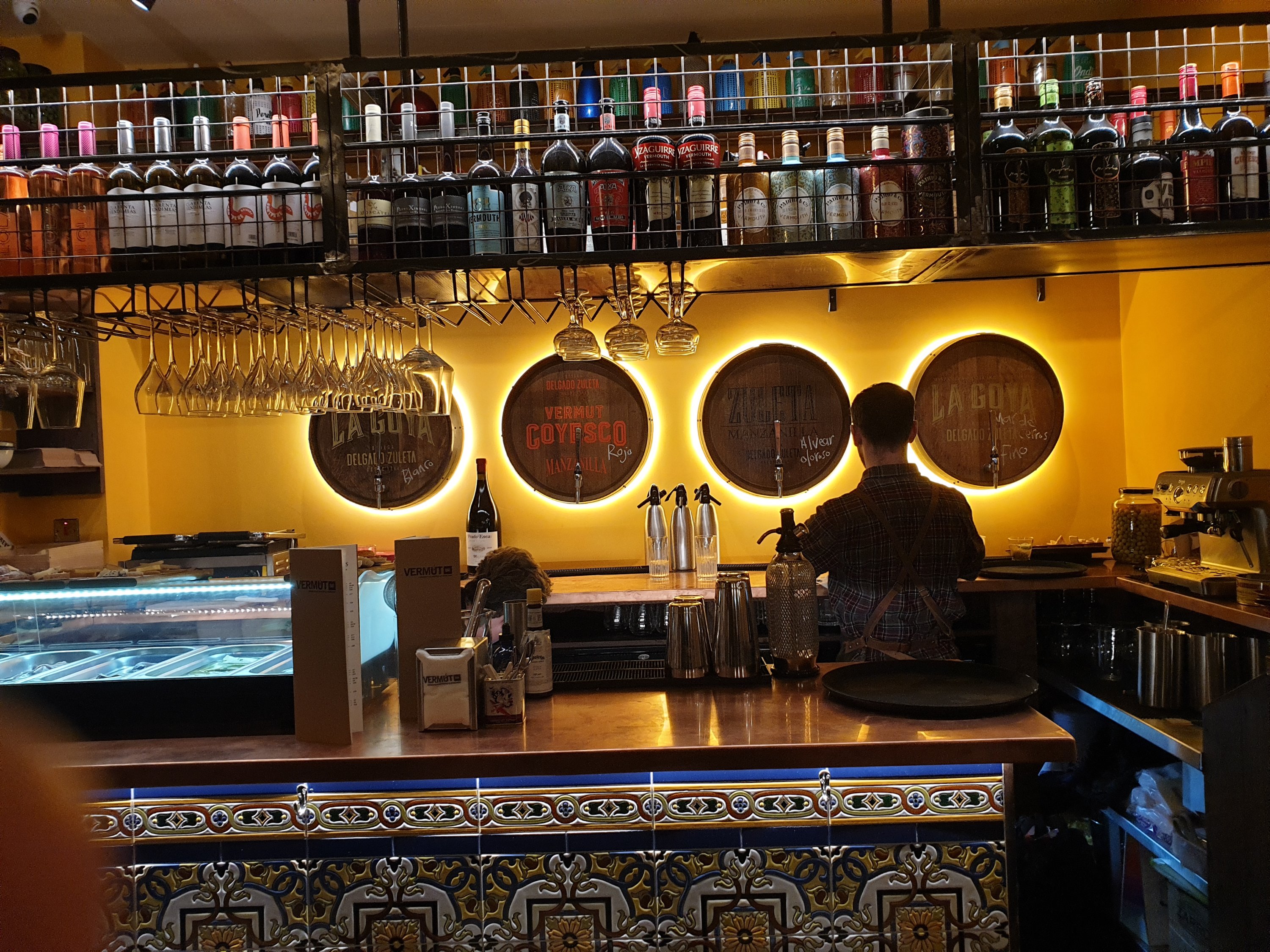 As I hispanophile, I have a love of the hole in the wall bars that are typical of many a Spanish town and city.

These are the sorts of places I happily stand at the bar with a glass of red or white wine, a sherry (or, if I can get it, Montilla-Moriles wine), a vermut or a cana and some tapas or pintxos (depending where in Spain I am) watching the world go by.

This brings me to Vermut, a newish Cardiff bar (it opened, rather unfortuitously, just before lockdown hit) brought to us by the lovely people behind Curado and Ultracomida (true hispanophiles), specialising in the very on trend (for once justified as it is just a lovely drink) vermut, as well as sherry (along with rioja one of my first loves wine wise) and the hugely underrated wines of Montilla – Moriles (made in the same way as sherry, but most certainly not sherry and don’t you dare call it that!).

I love all of those things individually, but put them together gives you the foundations of a rockstar bar in my world. It formed the venue (with its big sister Curado Bar) for a first foray back into town with J since lockdown.

A slow reversion back to the norm. after lock down – although being masked up in the cab into town felt anything but normal!

As the place is definately booze focus (food is on offer and very good it looks too) I have slightly changed the usual format to reflect this.

In terms of the interior, it is frankly amazing what they have done with the old Bombers sandwich unit. 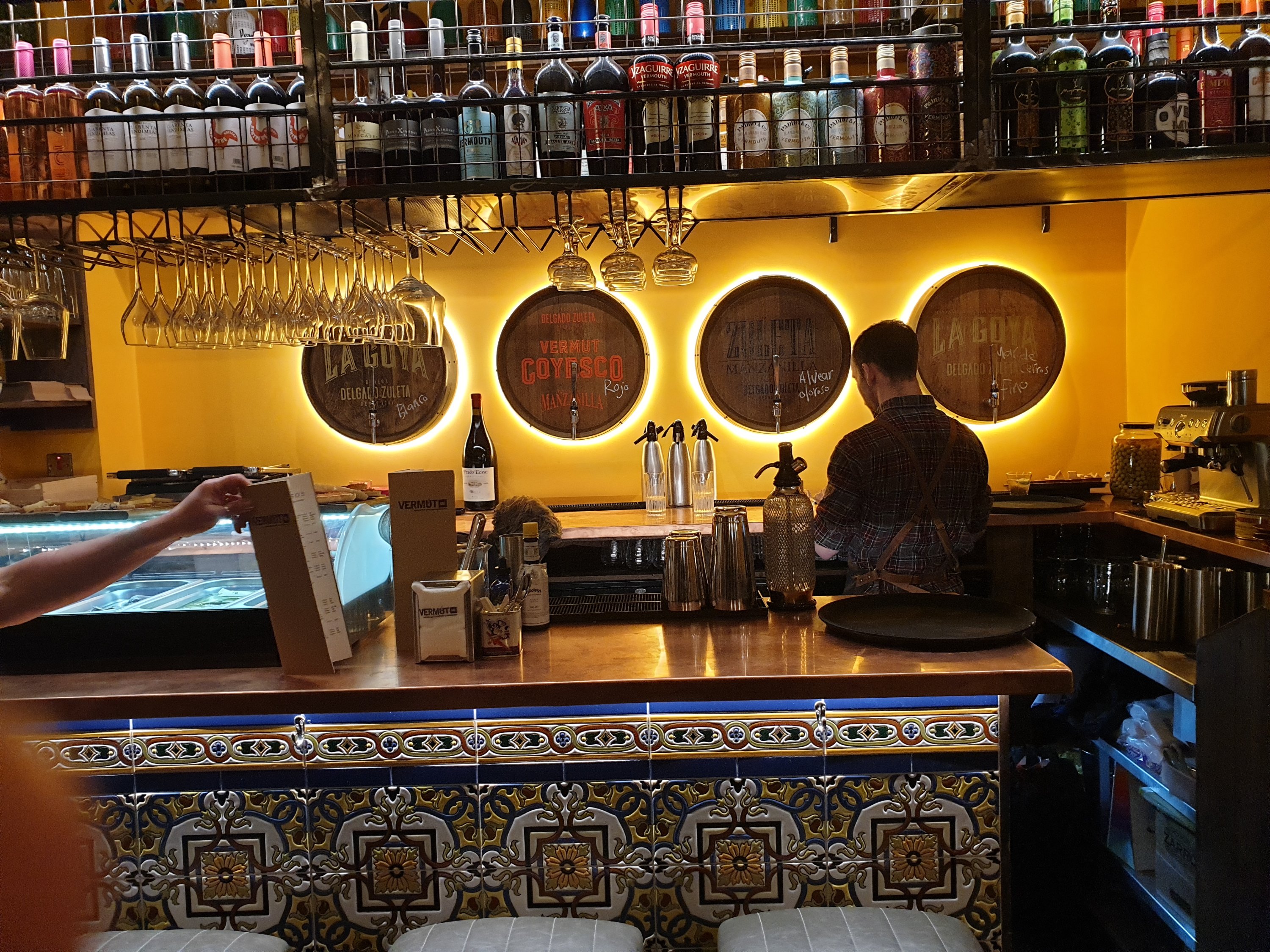 There is some clever use of mirrors to create a feeling of space, which makes it look massive compared to the old Bomber’s set up. 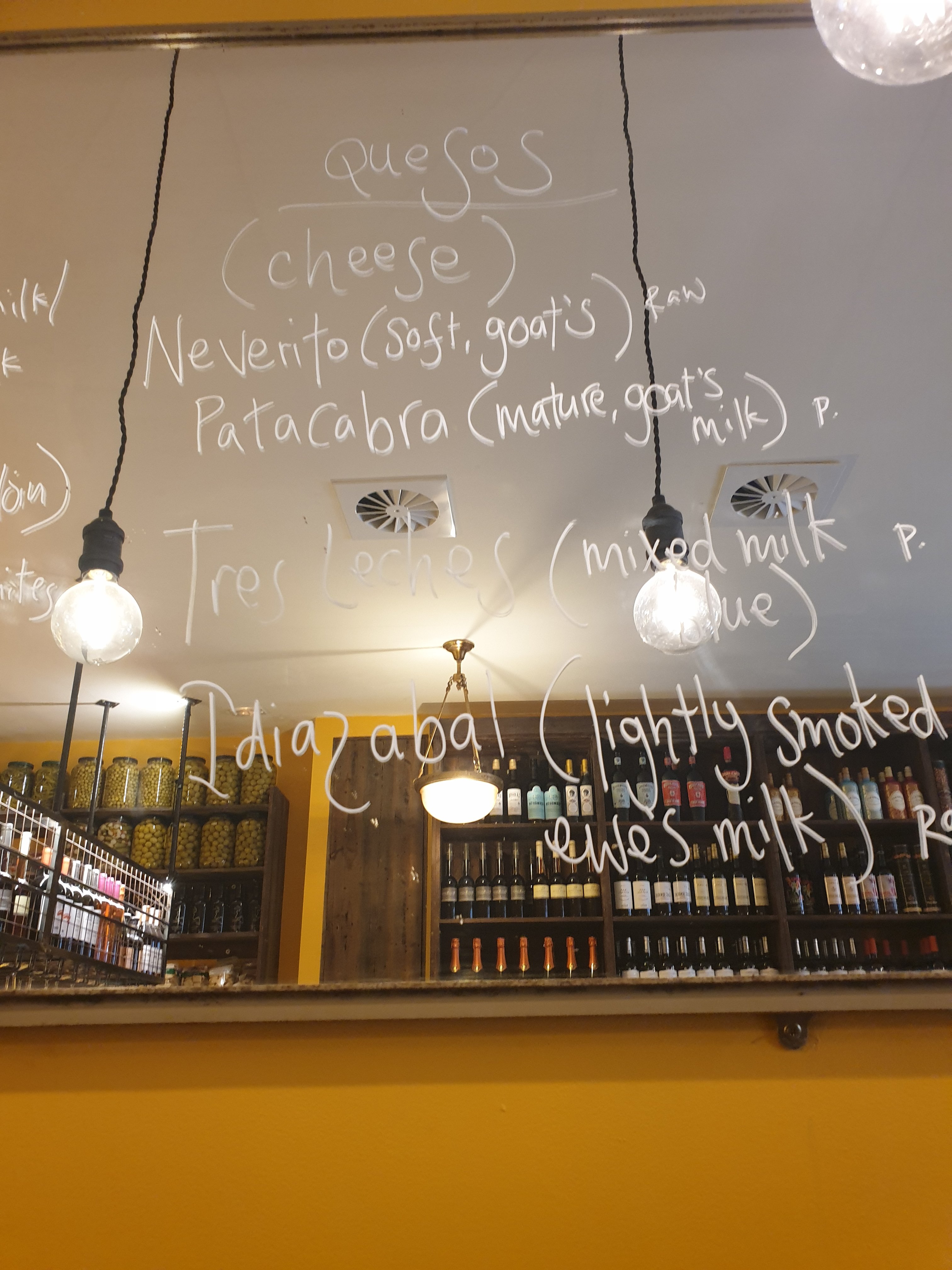 I love the storage solutions – oh to be locked down in this place. 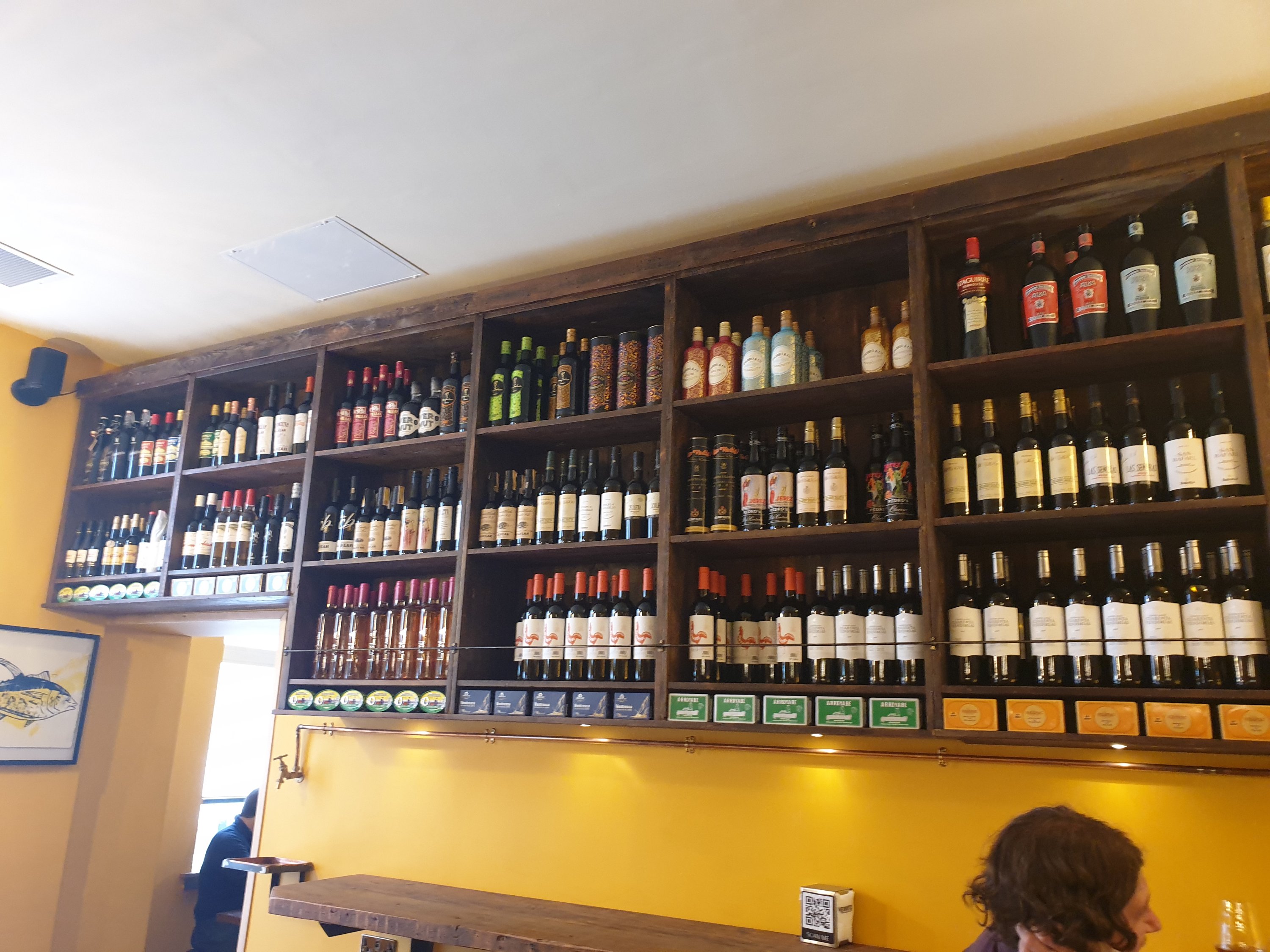 The drinks and food menus are on a QR – code which is a great idea. Thought these had died a death, but in our current Covid world they have re-emerge as very useful things. 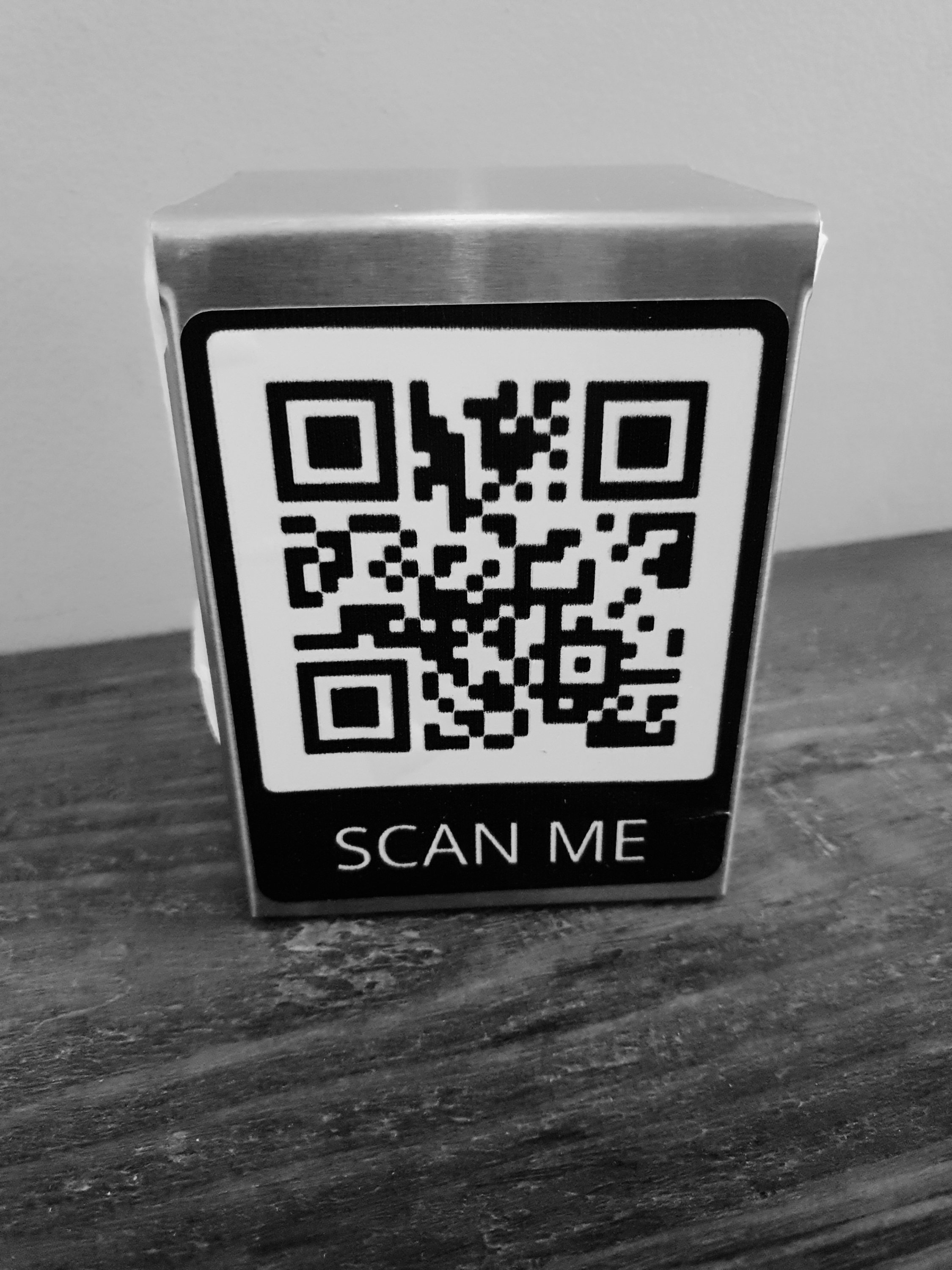 J had to show the old technophobe in me how it worked.

The drinks menu has a massive selection of vermuts (unsurprisingly given the name) in 100ml, 150ml and bottle formats.

The above is just a small selection of  vermuts from the North, South and East of Spain that they stock and they are all priced very reasonably.

As the name of the place is Vermut, it would have been churlish not to kick off   proceedings with a glass of that.

I went for the Martinez Lacuesta Rojo (£6 for a 150ml glass), a Rioja based outfit, 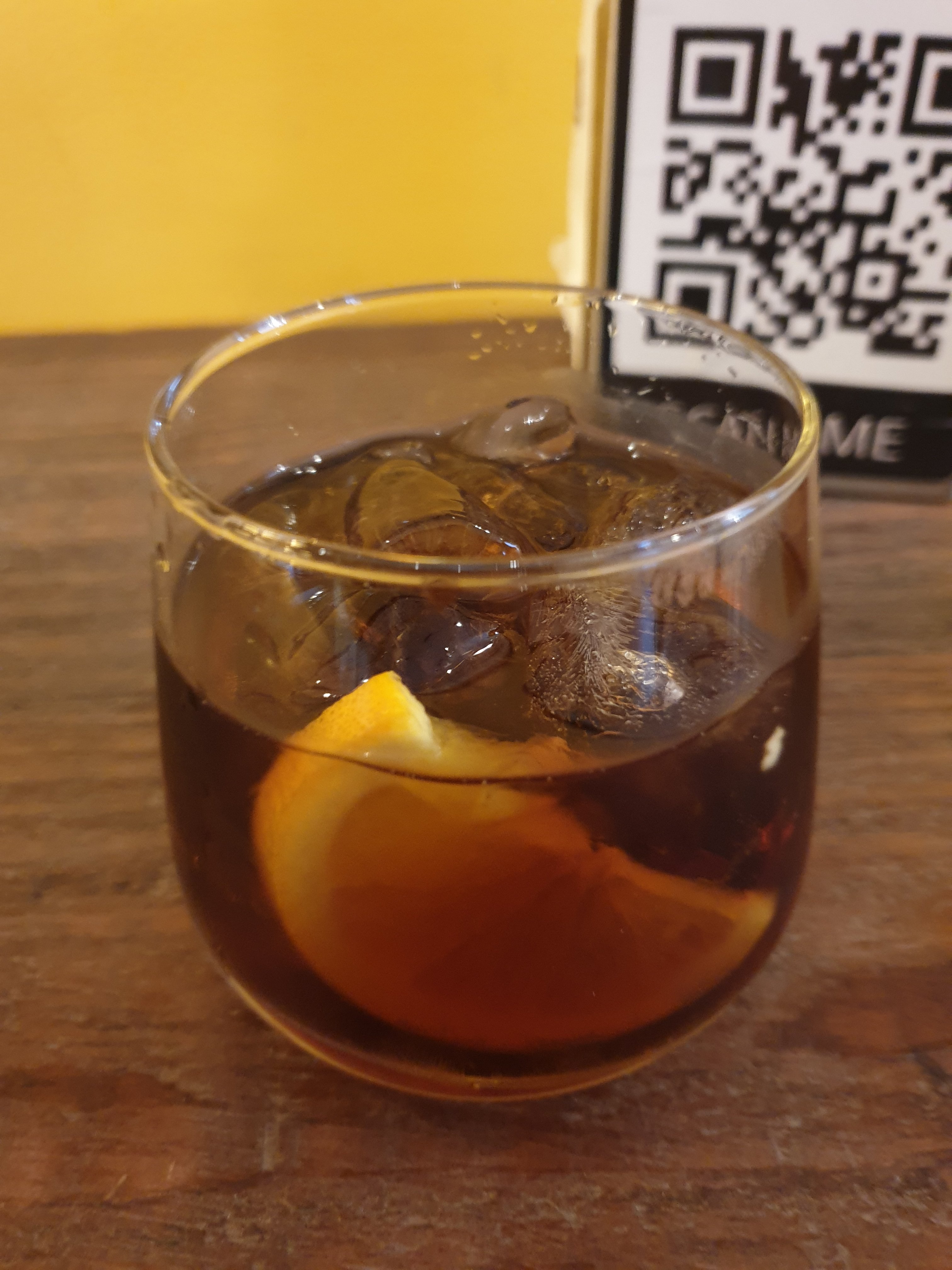 which is a rather lovely drop. A great appertif with bag loads of orange zest, herbs and a big hit of vanilla on the nose and palate.  Really aromatic, with a gorgeous bitter sweet finish.

Eminently gluggable, I ordered a second immediately as the first one went down dangerously easily.

Vermut is a drink I could serious smash all night long.

J was in the mood for a sherry. I am rather proud I have converted her to biologically aged wines of the sherry triangle and Montilla – Moriles. Next stage is oxidised one (she is not keen as yet, but I am working on it).

As with the vermuts, they have a great selection of sherry and Montilla-Moriles wines 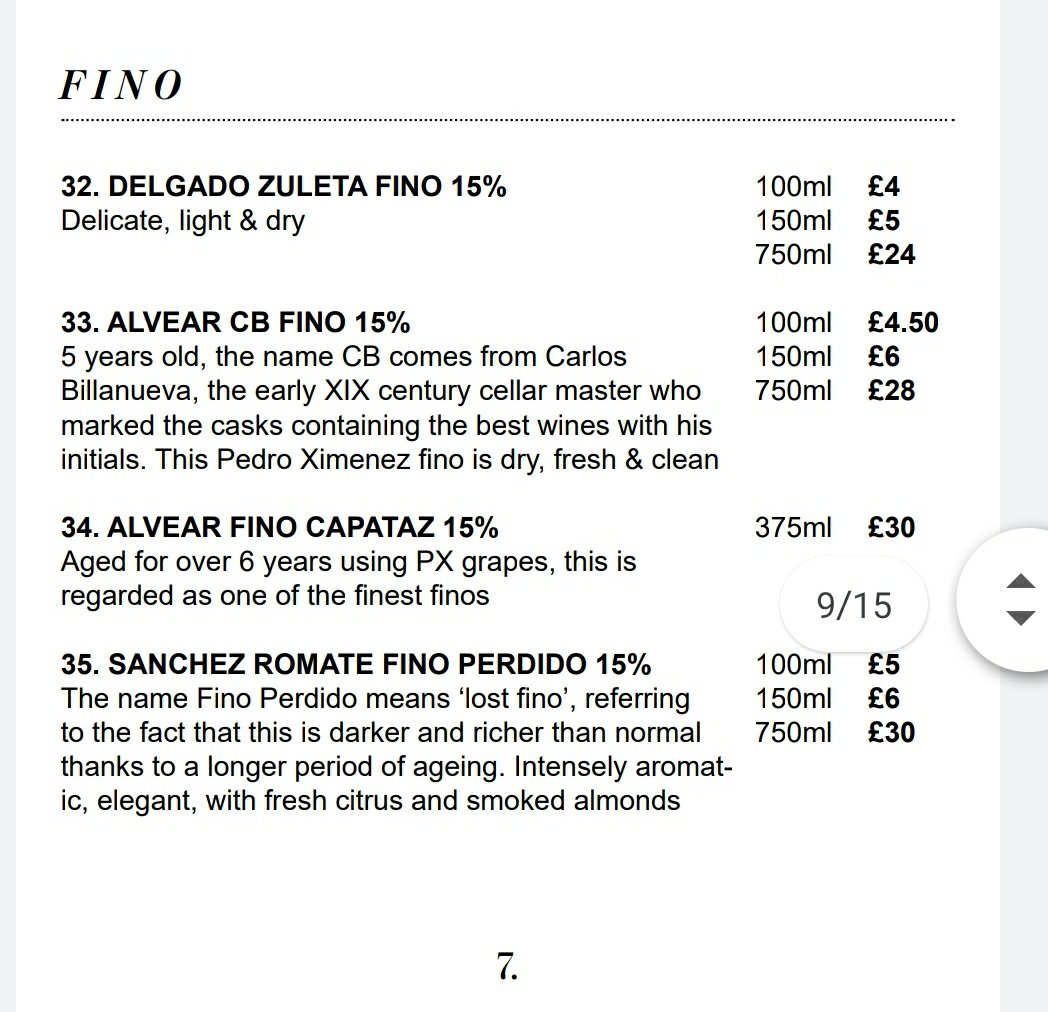 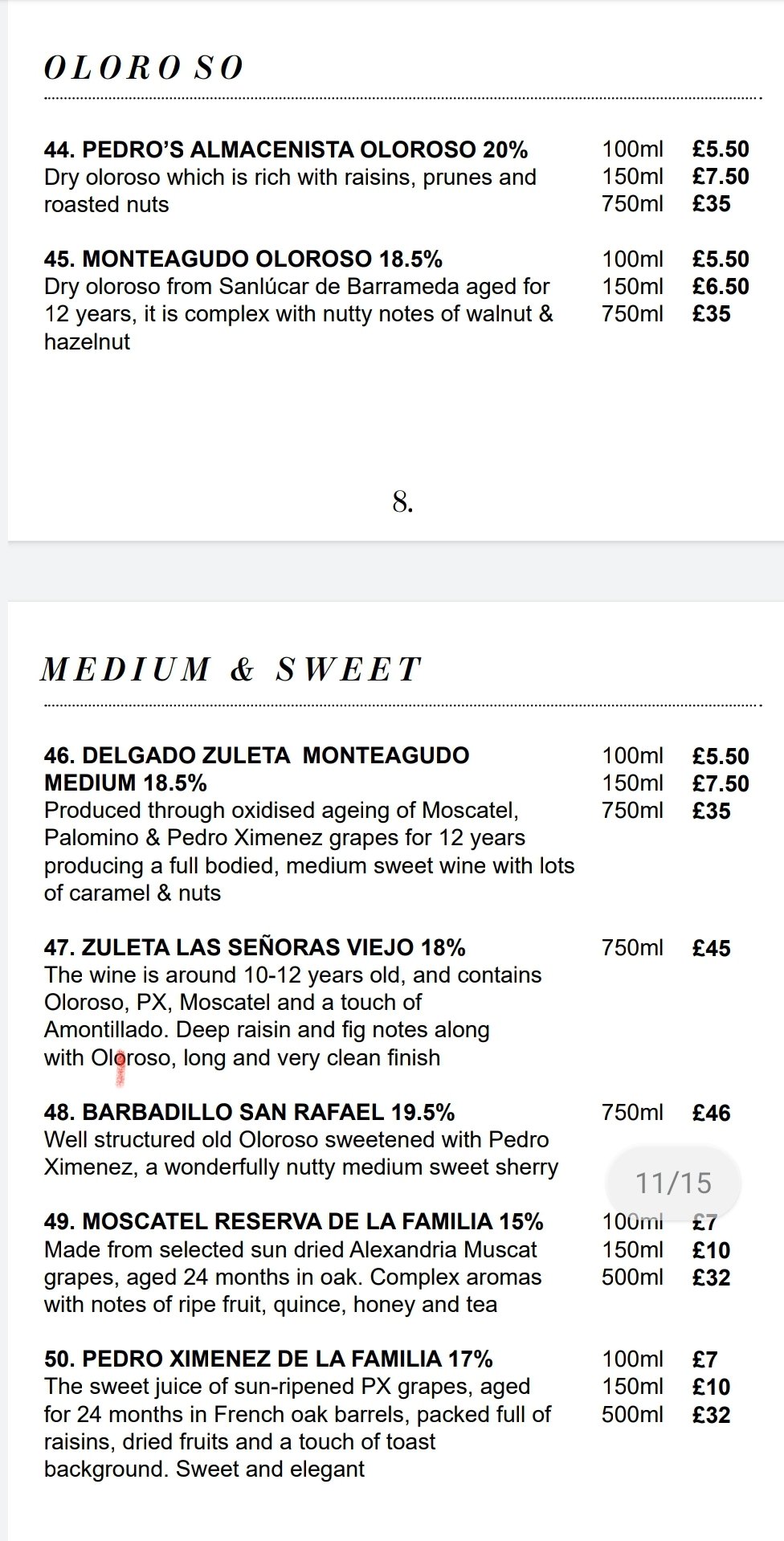 which cater for all tastes.

The Alvear’s Carlos VII amontillado is a wonderful wine and if you have a big wallet and a sense of the adventure the Delegado Zuleta Quo Vadis Amontillado is something else.

Weirdly wonderful is how I would describe it.

J, after some deliberation, went for the Delgado Zuleta fino (£5 for 150ml) 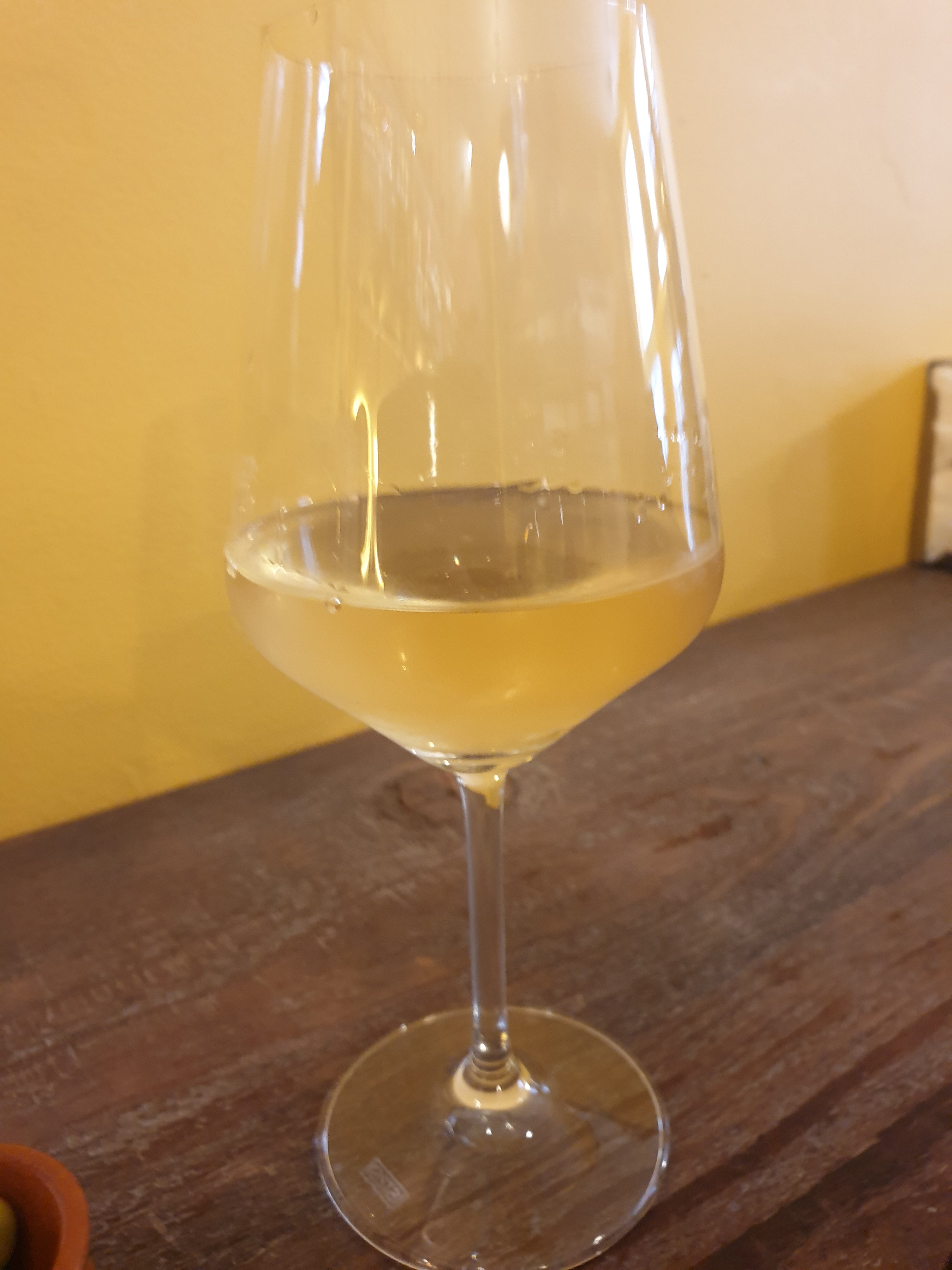 and (as with me) doubled up on this for the second round.

Very nice drop this, with lots of almond and a nice lemon zestiness on the nose and palate.

On top of the vermut, sherry and MM offering, they also do other drinks (4 house wines, with a red, a white, a rosé and a cava, as well as beers cidras and brandies).

On the wines, if you like sauvignon blanc you will like verdejo and the monastrell grape makes wonderful red wines (bit underrated, but very in with those in the know).

Something for everyone I would say.

With each drink we got a gratis little pot of nibbles, 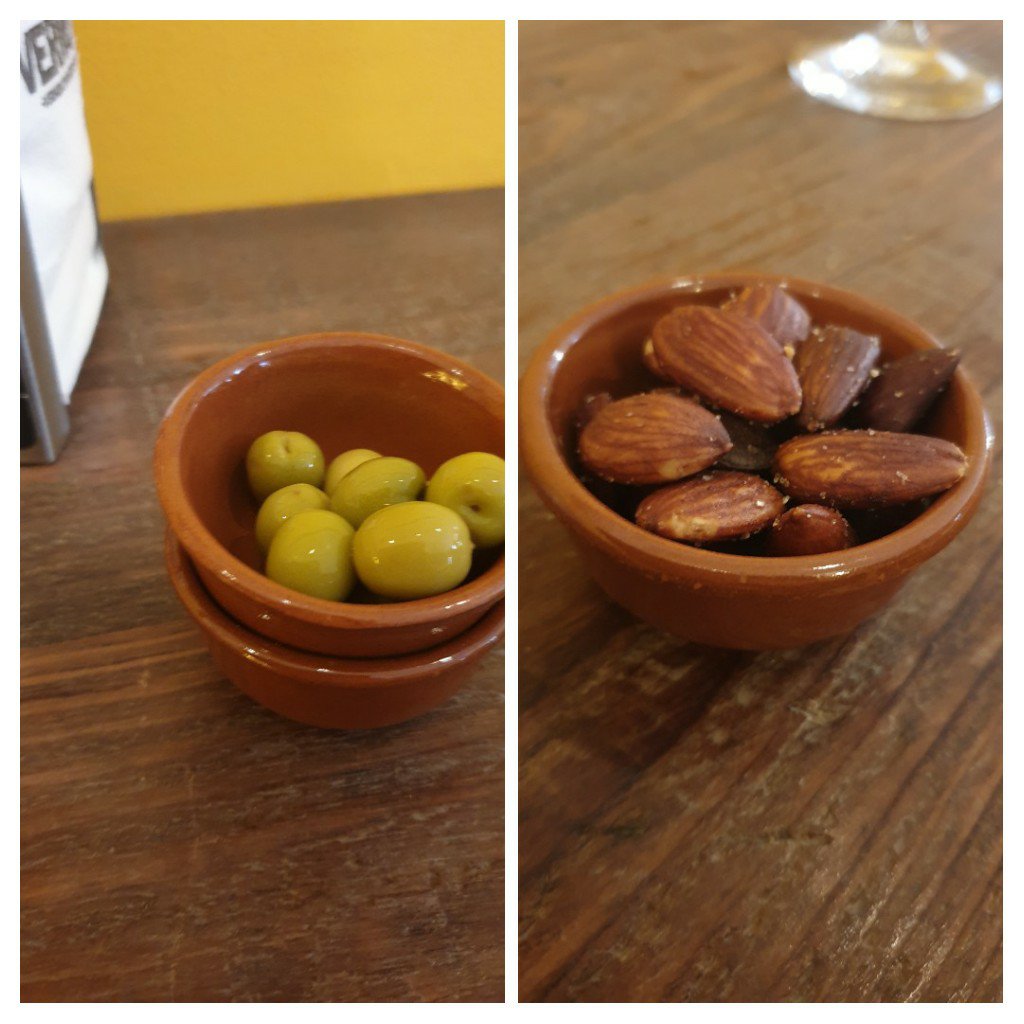 Some lovely manzanilla (I think) olives with the first round and some fine salted Valencian almonds with the second. Perfect bar snacks these.

On the food front, whilst J and I were booked into Curado for later that evening, the very nice olives and almonds were never going to be enough for two piggies like us with such an enticing food offering.

The smoked, salted and cured fish “conserva” offering in the bar display did tempt, 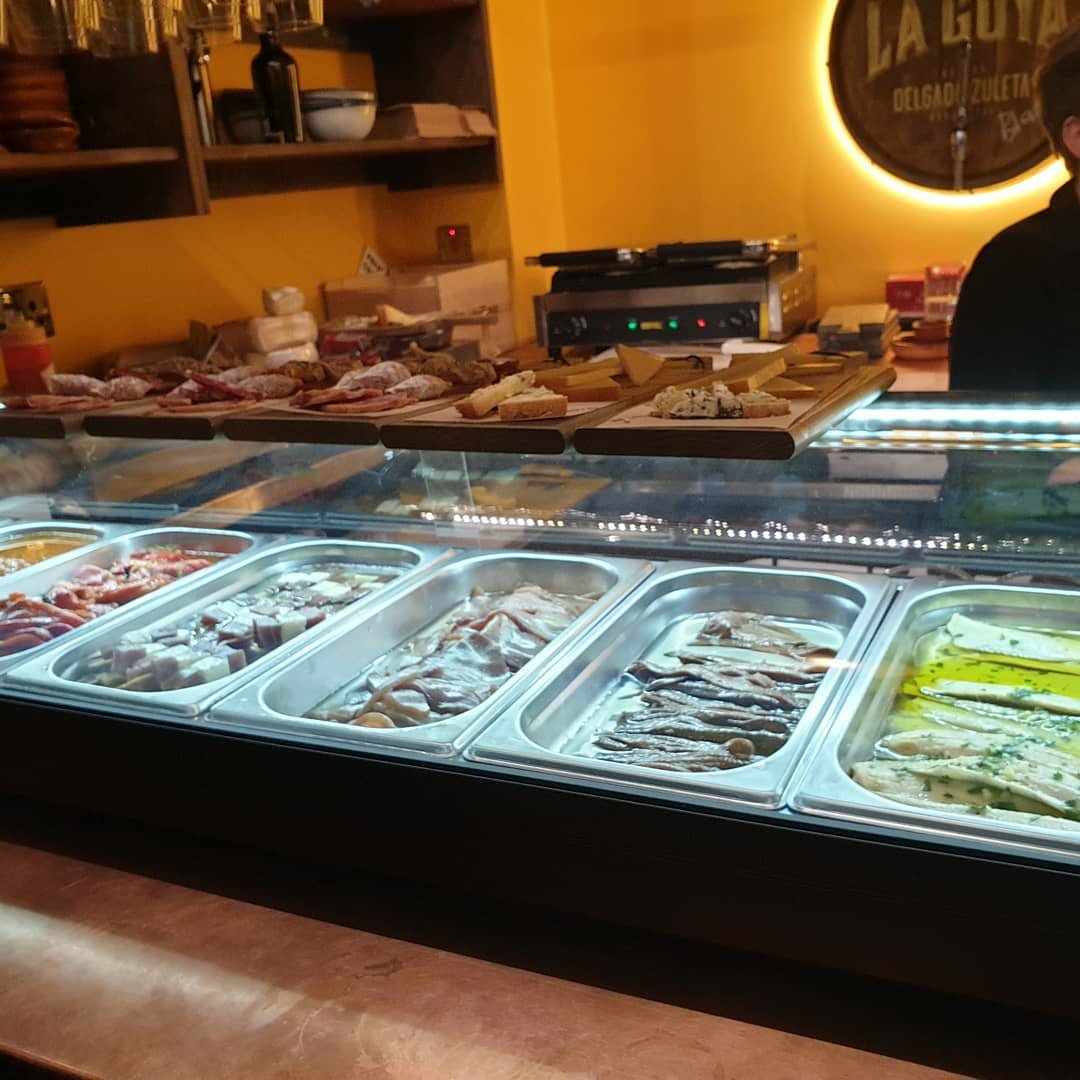 but I was drawn to the “enlatadas” (tinned fish) offering and J to the “Queso & Embutidos” (mixed cheese and charcuterie) plate. 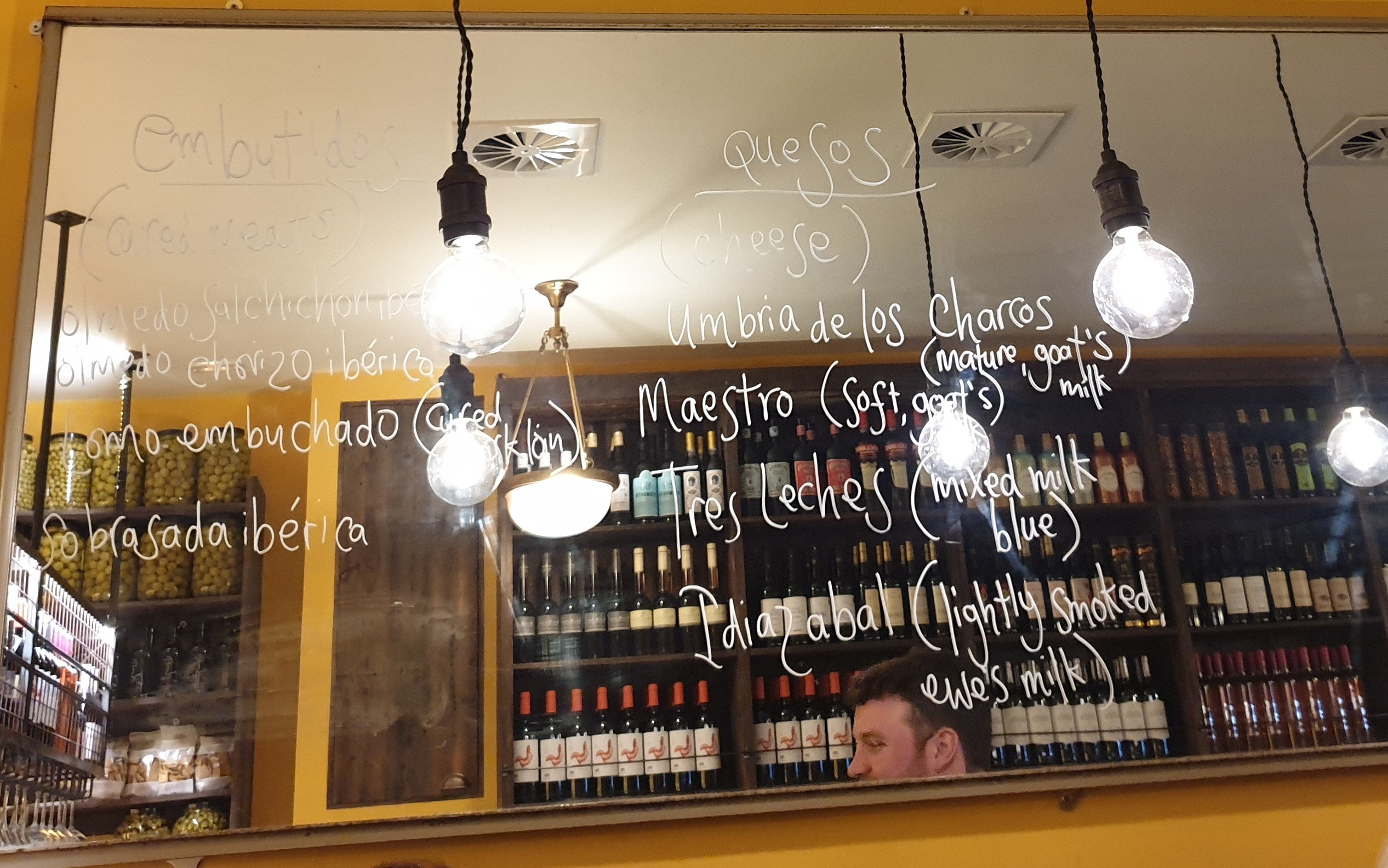 On the fishy front (despite some “How much for a tin of tuna?!” skepticism from J) we went for the ventresca de bonita (white tuna belly). 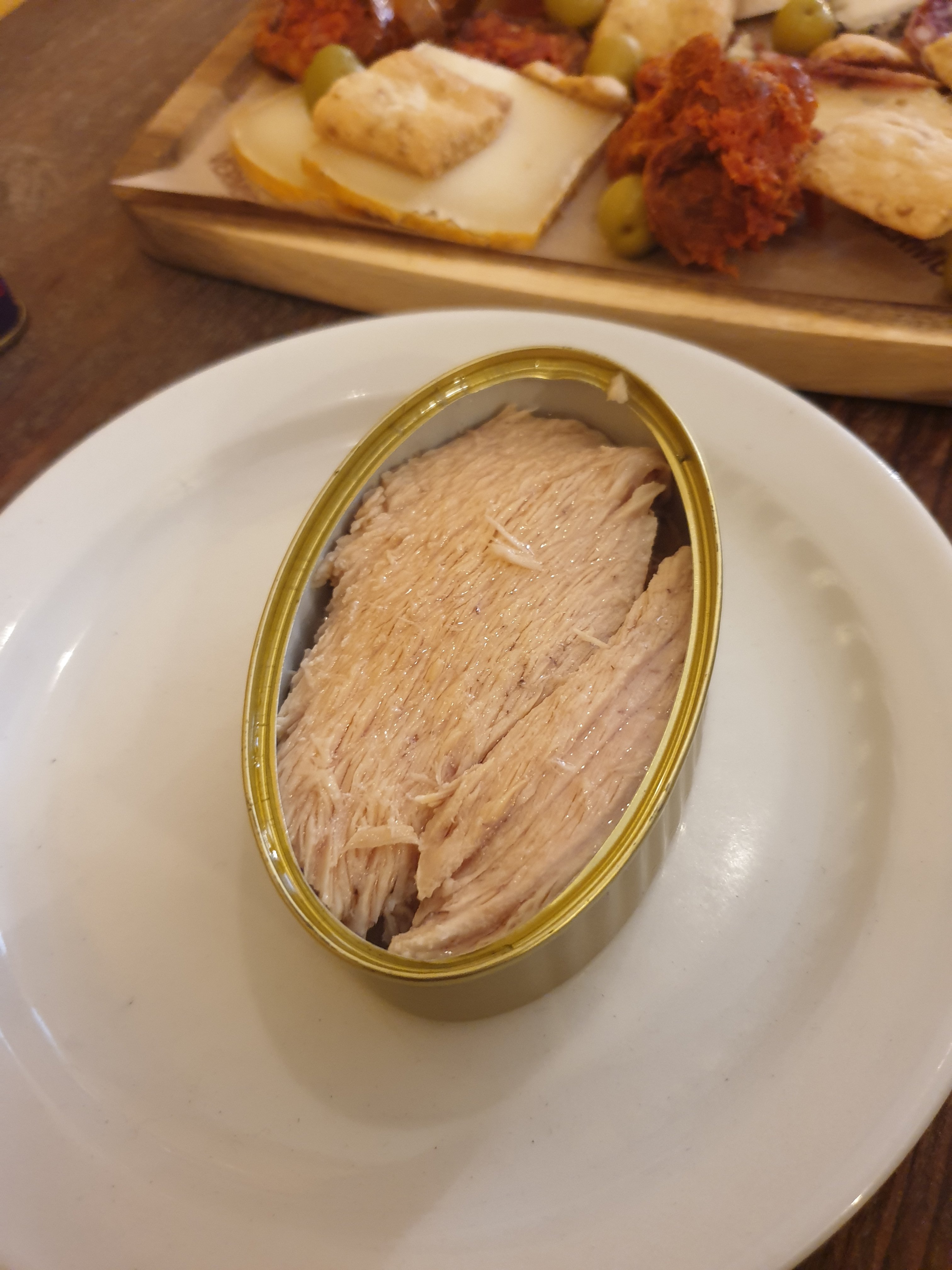 This was stunningly good with loads of flavour and a beguiling silky texture. By no means cheap at £14 for a 115g tin, it was worth every penny.

In J’s words ” Total game changer on the tuna front!”.

My only qualm is this has now ruined me for all other tuna!!

In terms of the “queso and embutido “offering, at £10 for the “full plate”, we rather innocently asked which of the embutidos and quesos listed on the mirror it came with and were very pleasantly surprised to be told all of them.

When it arrived we were even more pleasantly surprised, as it was huge. 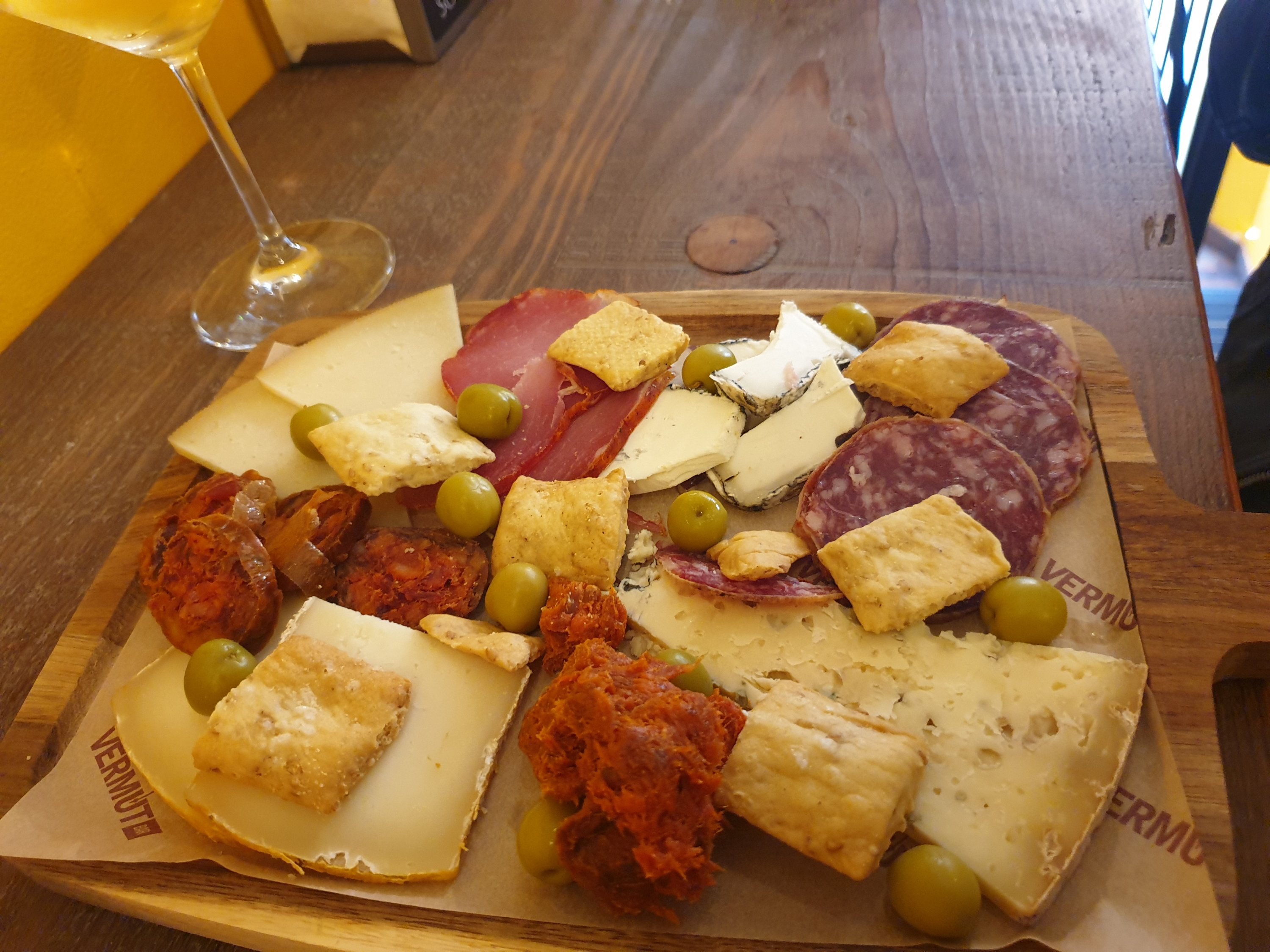 For a tenner this bountiful board of goodies is an absolute steal.

Top quality salchichón, sobrasada (nice paprika hit to it), lomo (the real deal stuff rather than the plasticy rubbish you sometimes get) and chorizo (nice and spicy) came with two really good goats cheeses (nevenito and patacabra), a creamy blue (tres leches) and a lightly smoked basque cheese called Iziadabal. To these they added some crackers (reganas) and some more of the lovely olives.

All really good and as I have already stated a serious bargain – such that I even said to Teej (of Vermut and Curado) that I thought they were undercharging. This was met with a wry smile and a something along the lines of “we want to give you punters a good deal”.

I say fill your boots Cardiff as this is one of the best value bar offerings out there in Cardiff at the moment!

I really like Vermut, it is so my kind of bar with a focus on drinks (vermut, sherry and MM wines) that I absolutely love and great nibbles to go with them.

It is perfect for a pre dinner appertif or postprandial.

J and I choose the former and filled our boots in Curado after our visit to Vermut. 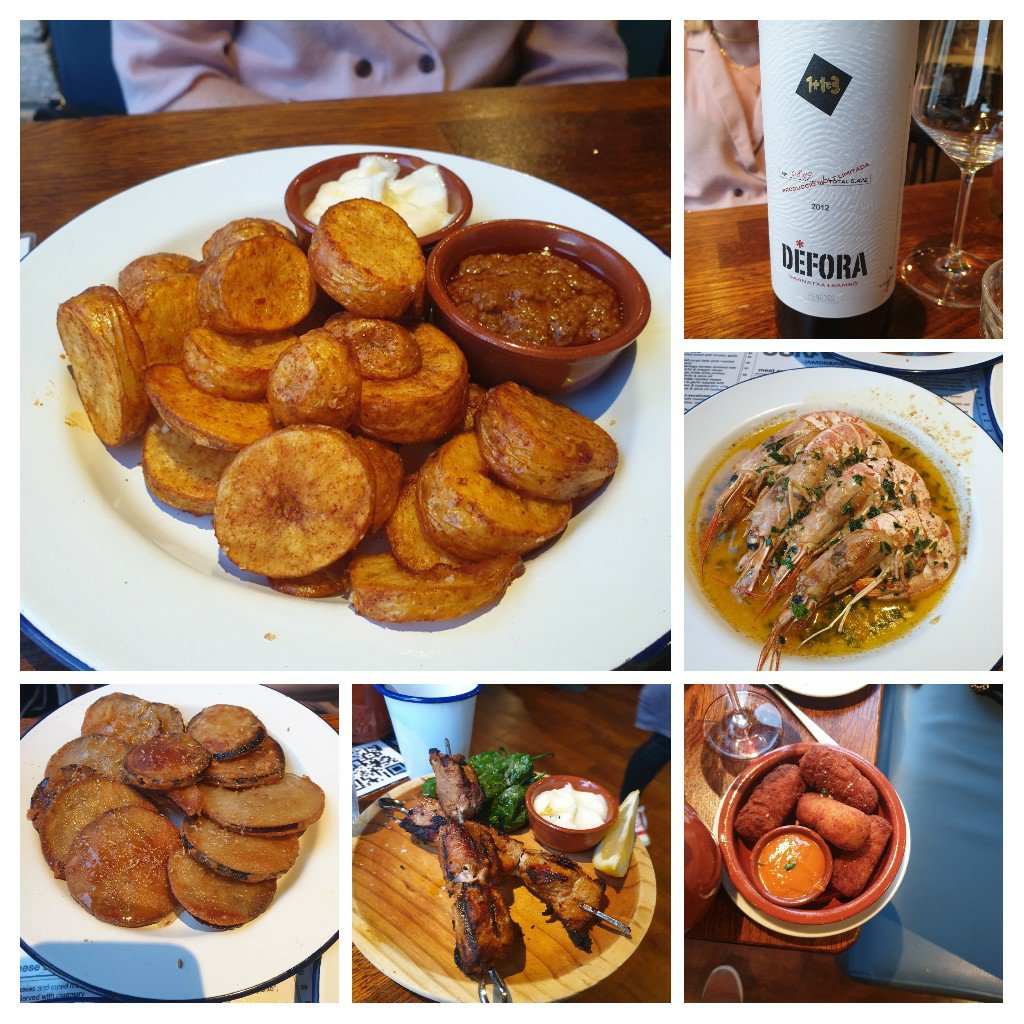 Vermut is a great new addition to the Cardiff bar scene – which brings a little bit more of Spain to Cardiff.

With Curado, Bar 44, Asador 44 and now Vermut we have some Barrio in the City centre.

Will I go back? Absolutely – try and stop me.

Mrs. SF and I have been back, with another lovely afternoon of vermut, red wine, sherry and canned tuna. 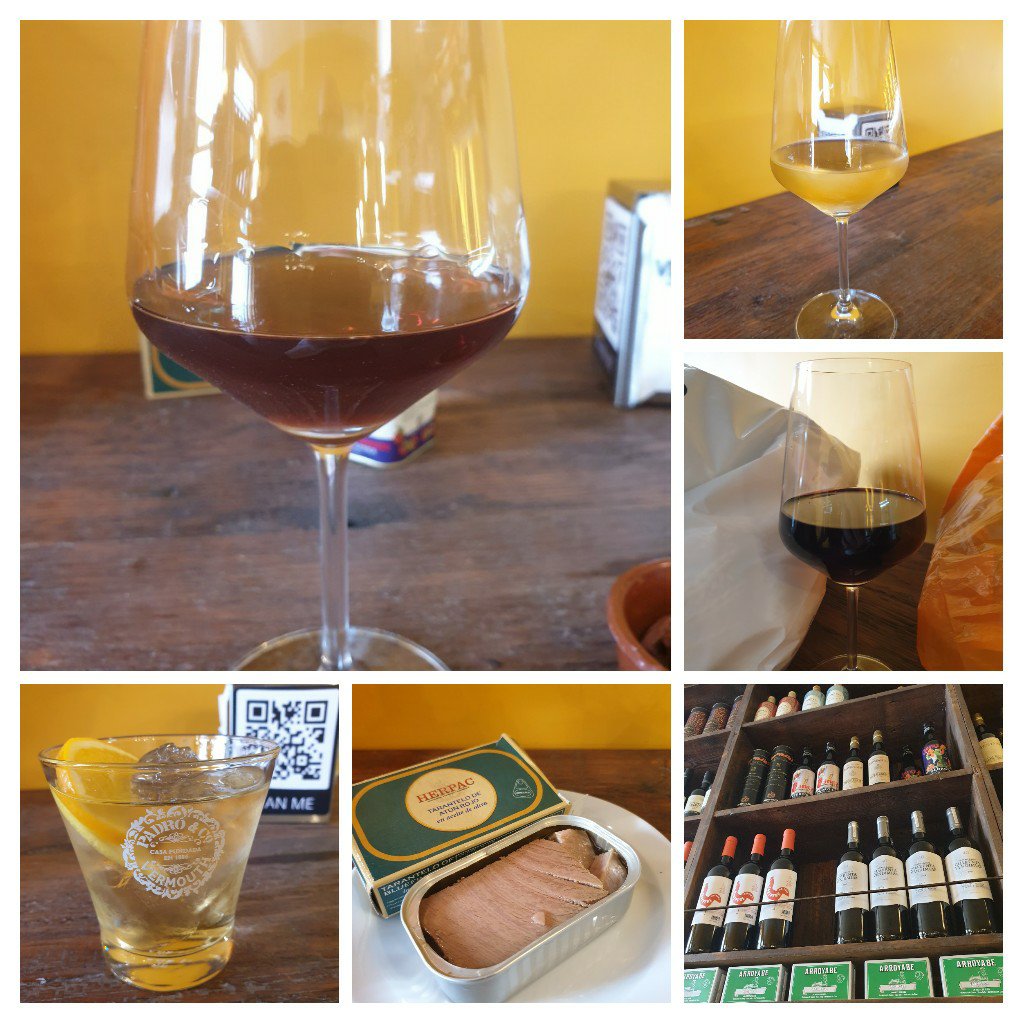 The palo cortado (top left) I had was the absolute business.

Well worth knowing that all the drinks and food here are available retail.

J and I both bought a tin of the ventrasco to take home on last visit. 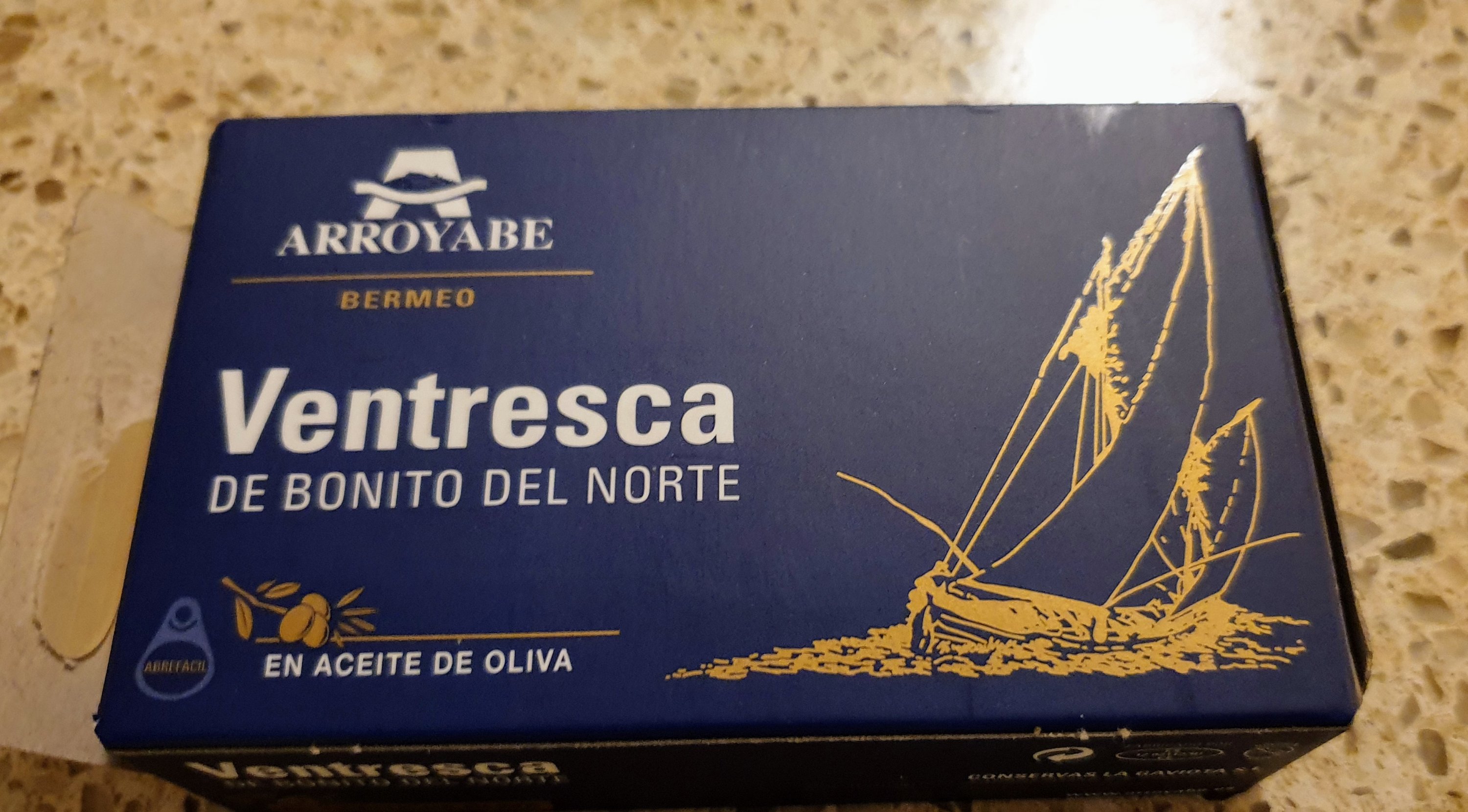