Is the “New” World any different to the “Old” World? Le Monde, Cardiff City centre.

Le Monde has been going for what seems like an eternity, with it being the “in vogue” place (alongside its long deceased stable mate Champers) when I was at Uni (back in 1730 – bit of an exaggeration, but only a slight one!) in Cardiff. Had my post graduation meal here if memory serve me well (doubtful these days).

Back then a counter displaying fresh fish and fresh meat ready to be cooked to order was a bit of a revelation as against the Bernie Inns and Beefeaters type places of that age. Life was a lot less sophisticated (not in a good way) back then food wise.

Recently I noticed the place had closed for a refit, after coming back into the hands of the original owners (the Martinez family). Furniture and various bits of detritus on the pavement outside the entrance in July suggested a serious bit of a revamping.

With a new spruced up exterior and the offer of a fixed price lunch (at a competitive £12.95 for 2 courses)

my interest (being a tight arse) was duly piqued. Whilst not clear from the signage externally or internally, this lunch offer includes one course for £8.95. In theory, a very competive price in the city centre.

The usual chaps from work and I decide to give it a go on a mid week lunch time to see what the revamped interior looked like and run the rule over the fixed price lunch offering.

Been a while since I visited the place, so my memory of what it was like (prior to the refit) is a bit sketchy. I recall it being a bit spit and sawdust previously. The refit is certainly an inprovement

You still get the trademark meat and fish counters,

but it is an altogether swisher affair I think. 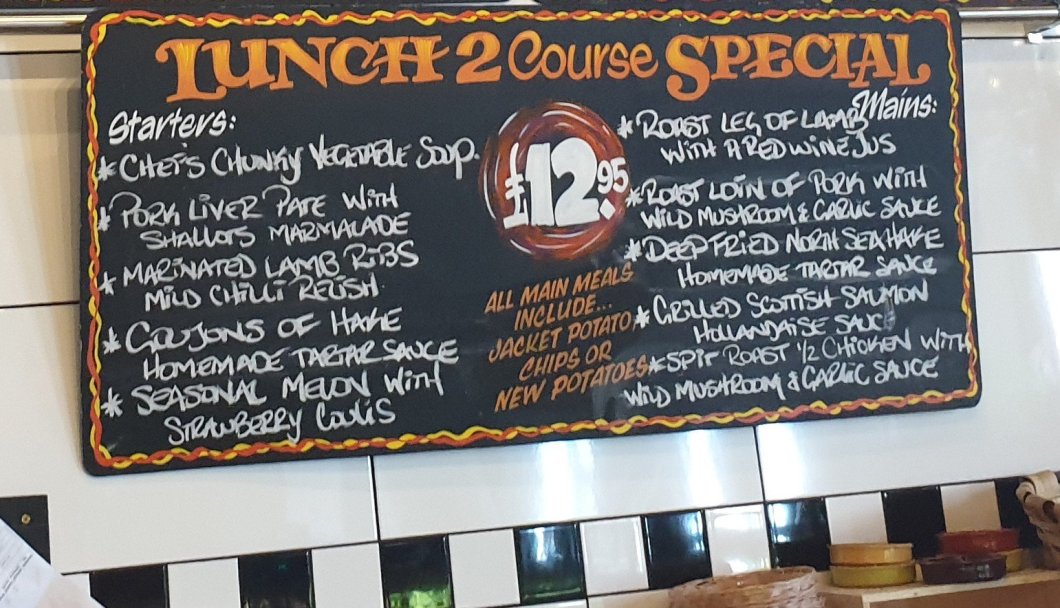 and £8.95 for just a main. The latter offer is not exactly clear and we had to clarify by asking if that was the deal.

Decent selection I thought, with enough of interest to cater for most carnivores and pescaterians. You are a bit buggered though if you are a veggie looking to order off the fixed price lunch menu (vegetable soup followed by an extra large slice of melon perhaps?!).

Unclear as to portion sizes (and all being tight arsed gits – is the collective noun for that “a gnat of tight arsed gits”), we decided on just the one course. As it happens this was a very wise move.

I ordered the pork loin main, which was referred to as coming with a mushroom and garlic sauce (it didn’t).

Big portion this, vindicating the decision to go for one rather than two courses,

As mentioned above the accompanying sauce was most definitely not a mushroom and garlic one. I think they applied (by mistake) to my pork the red wine jus (it was more a gravy than a jus to my mind) that was advertised as coming with the lamb dish

As a gravy it was perfectly nice, certainly a touch thick to qualify as a jus, but I would have preferred to have got the advertised mushroom and garlic sauce.

The veggies that came with it were a strange mix of what you would expect with roast pork and gravy (carrots and runner beans) and those you wouldn’t (baby corn – never really understood the point of that stuff outside of maybe a stir fry). All were cooked fine (being suitably al dente), but I did rile a bit against the broad beans still having their jackets on (brought back bad memories of school dinners). 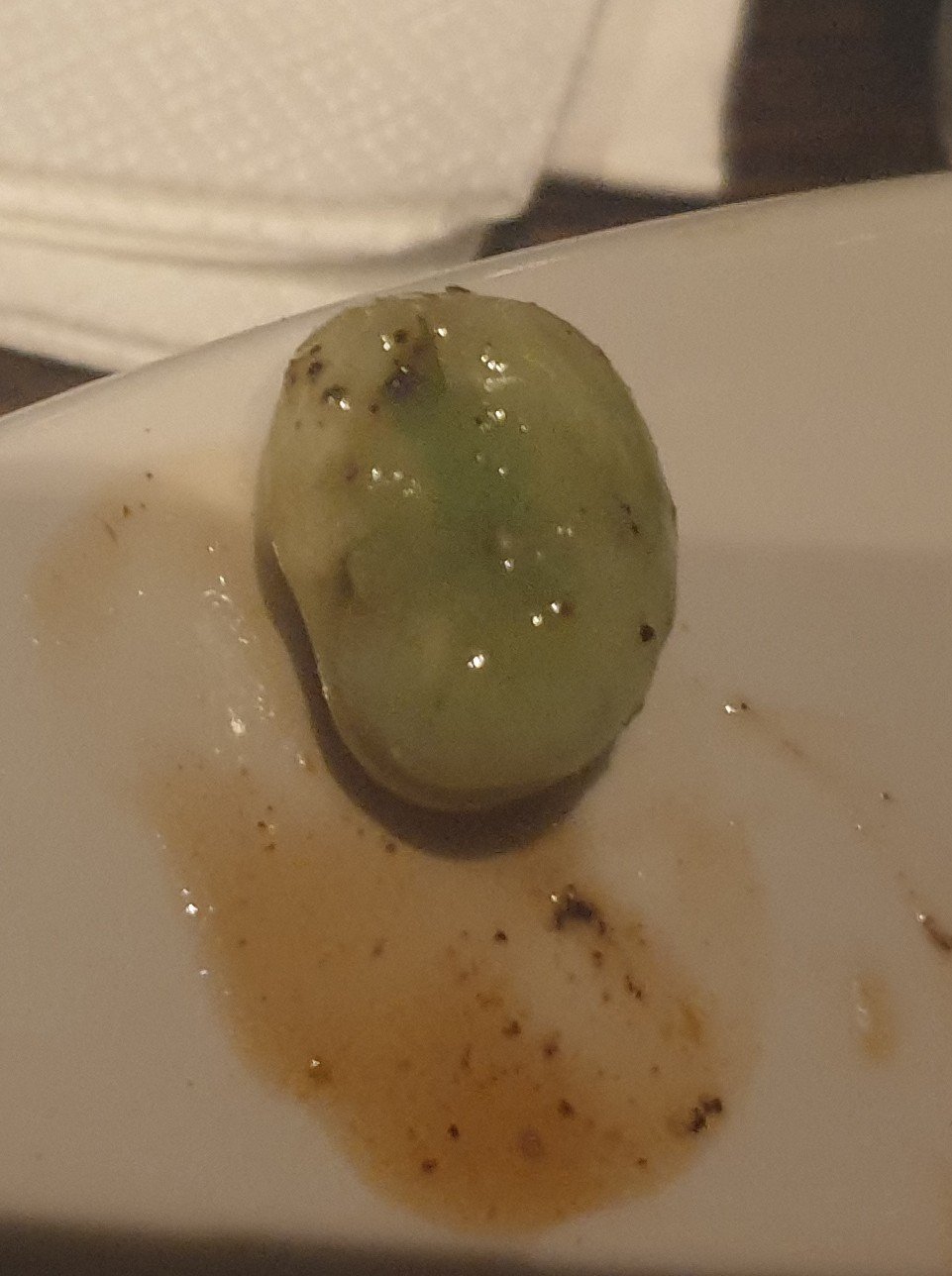 There is a choice of new potatoes, chips and a jacket spud with each main.

I went for the chips, 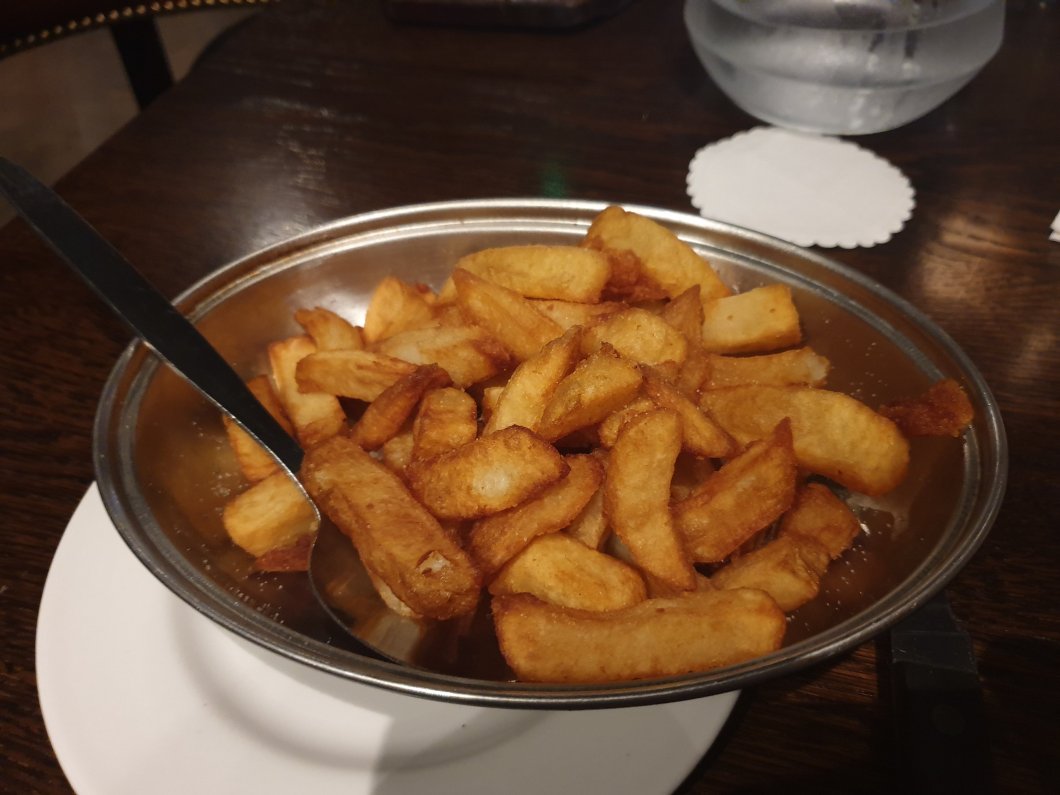 which were plentiful and crispy on the outside and fluffy on the inside.

Notwithstanding the sauce mix up and the slightly odd veggie mix, I enjoyed my pork. It had a good flavour to it, with decent crackling, and was plentiful – pretty good, if a touch unsophisticated, lunch time fare I thought.

In terms of the other chaps, one had the lamb (same gravy and slightly odd veggies as per my pork) and enjoyed it, with it being a nice portion of roasted leg (not as rare as I like lamb) 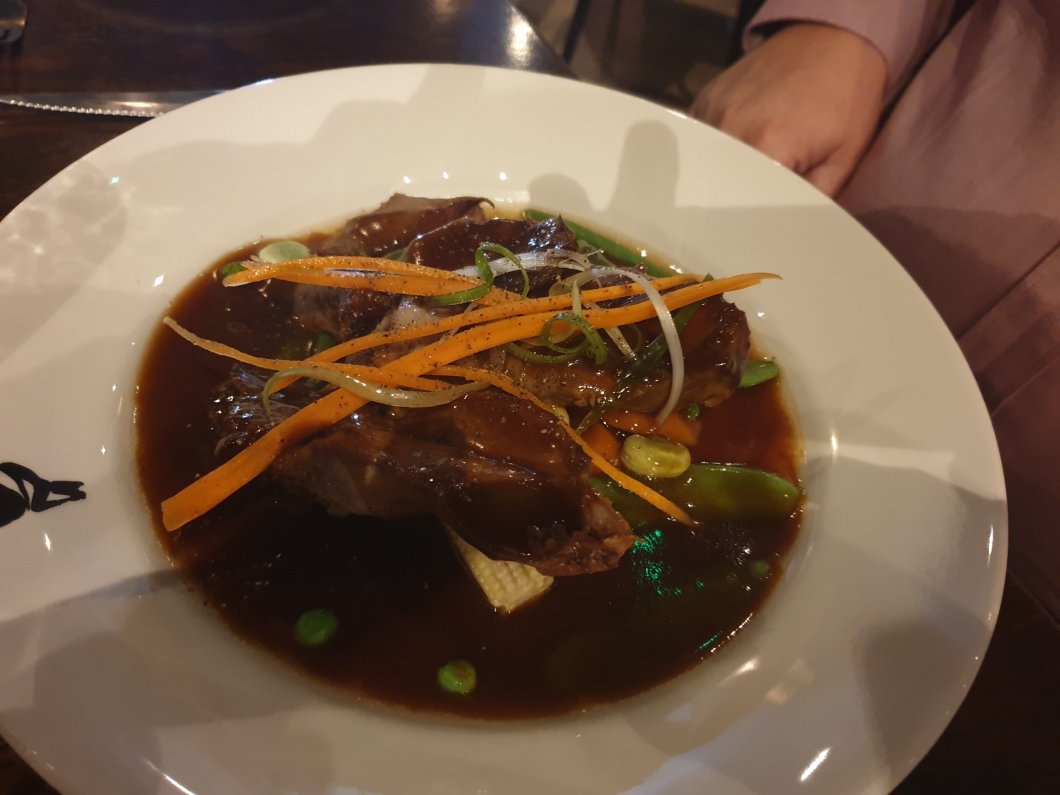 The final dish ordered was a piece of battered hake (one of my favourite fish to eat – the seafood loving Spaniards are mad for it for good reason). 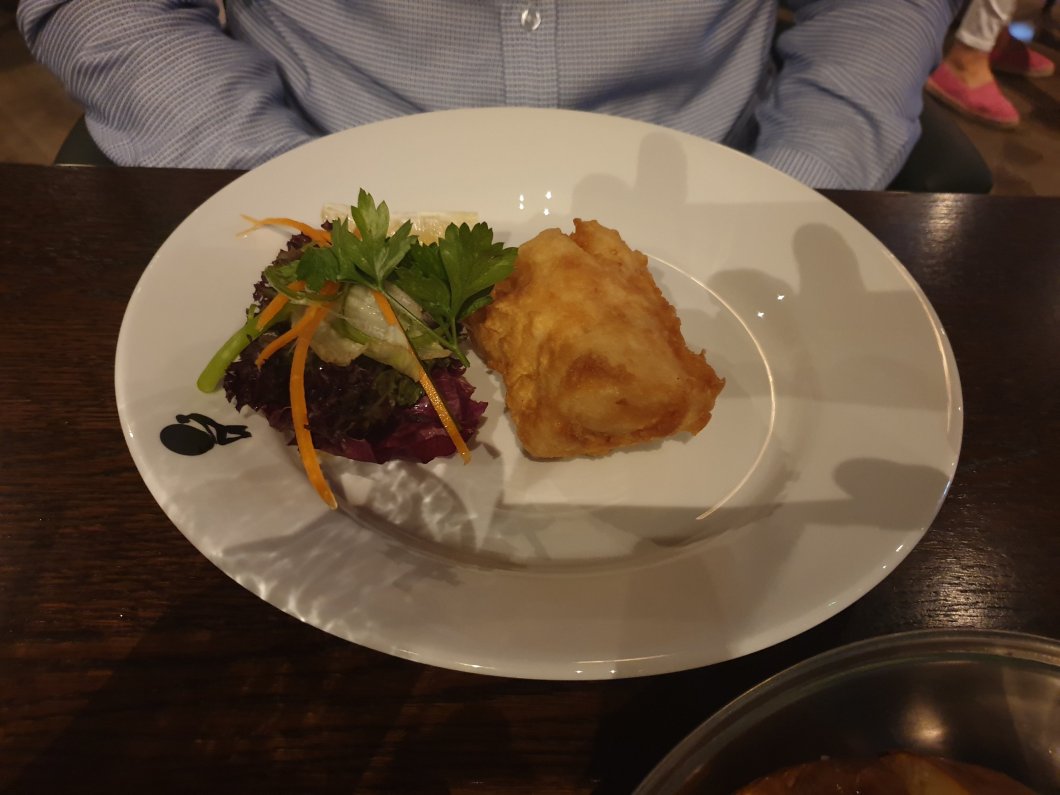 Nice thin, crisp batter encased a large flaked bit of pearly white fish. My friend though it a touch under for his taste, but it looked fine to me (being past translucent)

Both the lamb and the fish came with the same choice of spuds as the pork, with both going for a jacket potato

Decent baked spud, although I prefer my jackets with a crispier skin. Nice to see loads of butter in there though. 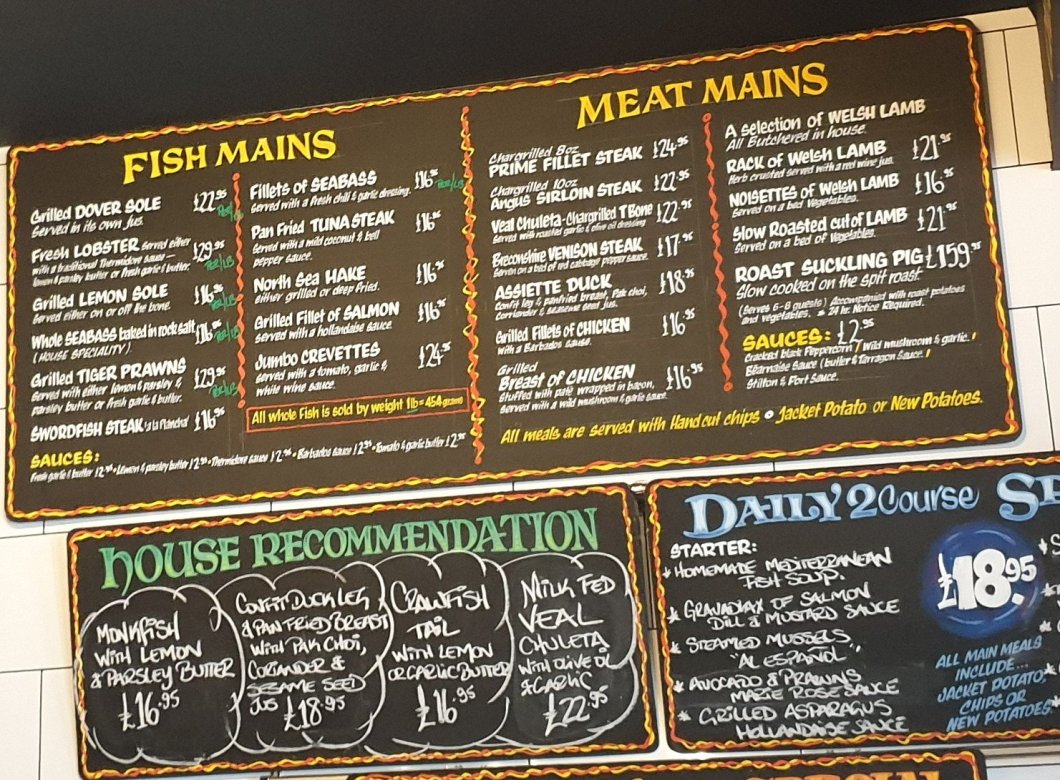 from the boards. The menu seems to retain much of what had been on it in the past (even back to the long distant day of my graduation). So less a revamp, more a rewind in terms of the food offering.

We saw a couple of nice looking lobster thermidors on the pass and I also rather liked the look of the veal chuleta,

as well as the Welsh lamb.

There is also a two course dinner offer, 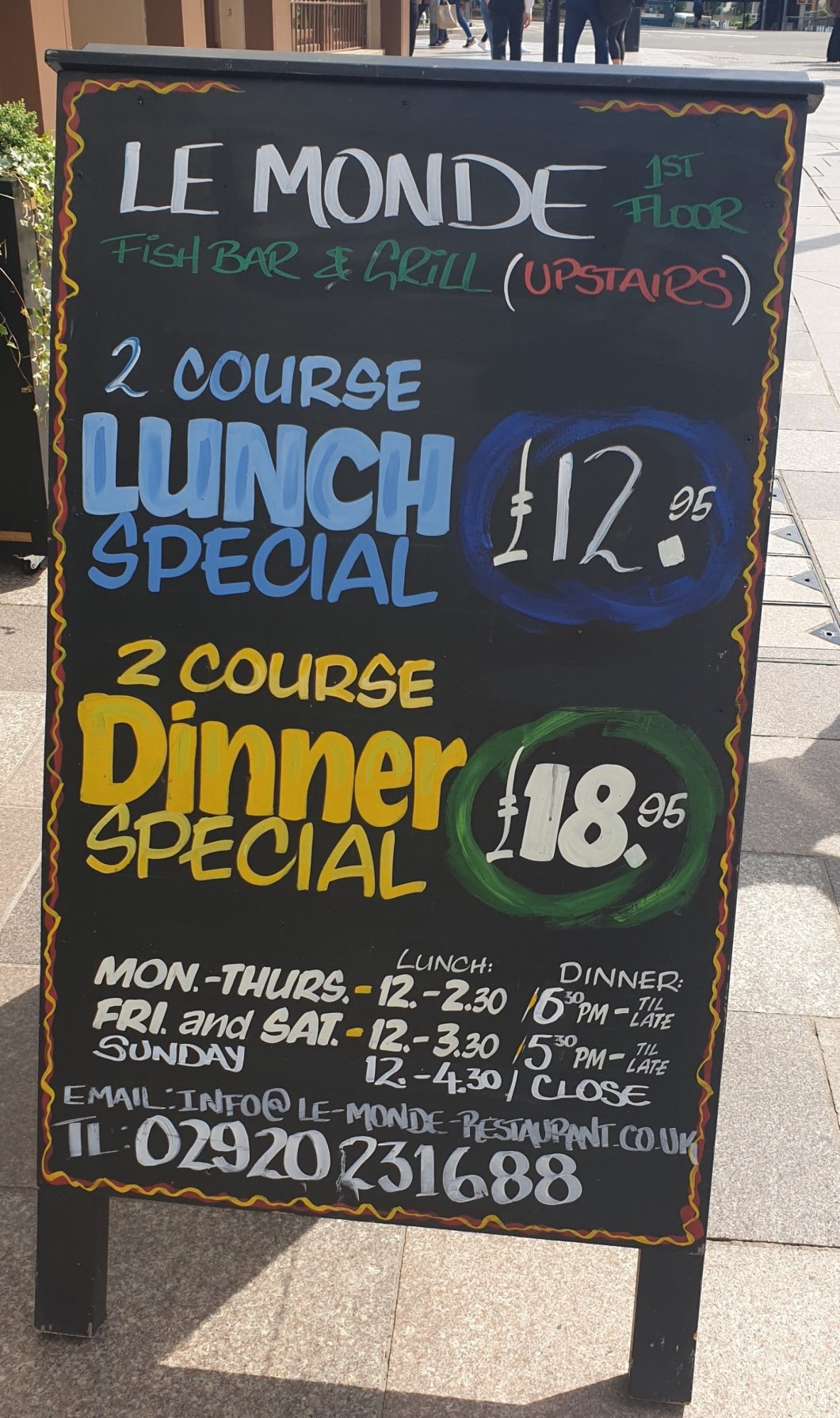 which looks pretty decent value (for a more fish orientated menu than the lunch offer). 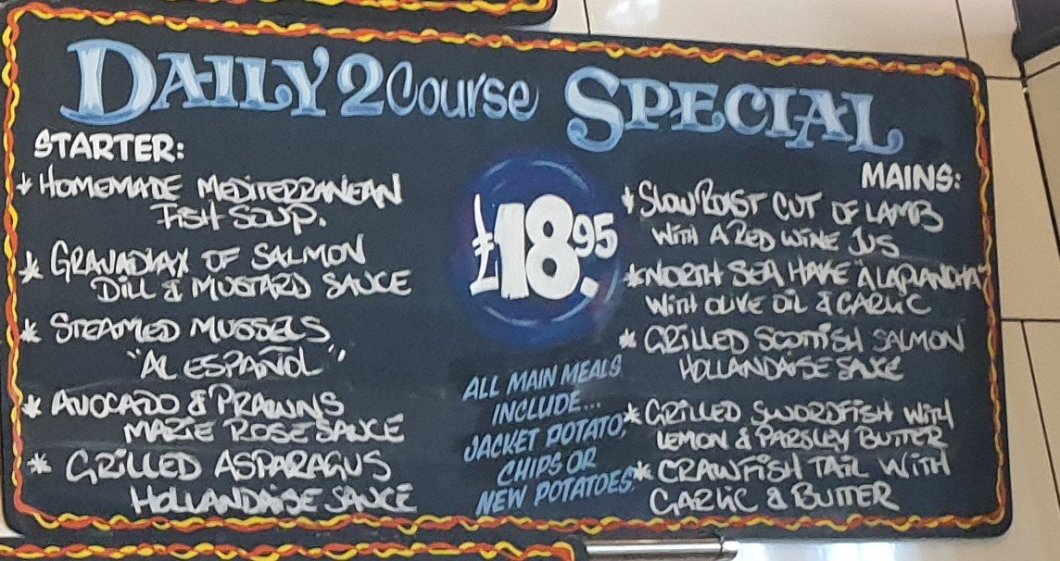 On the booze front they have a pretty strong game going on for both for reds and whites, especially if you have some cash to splash. 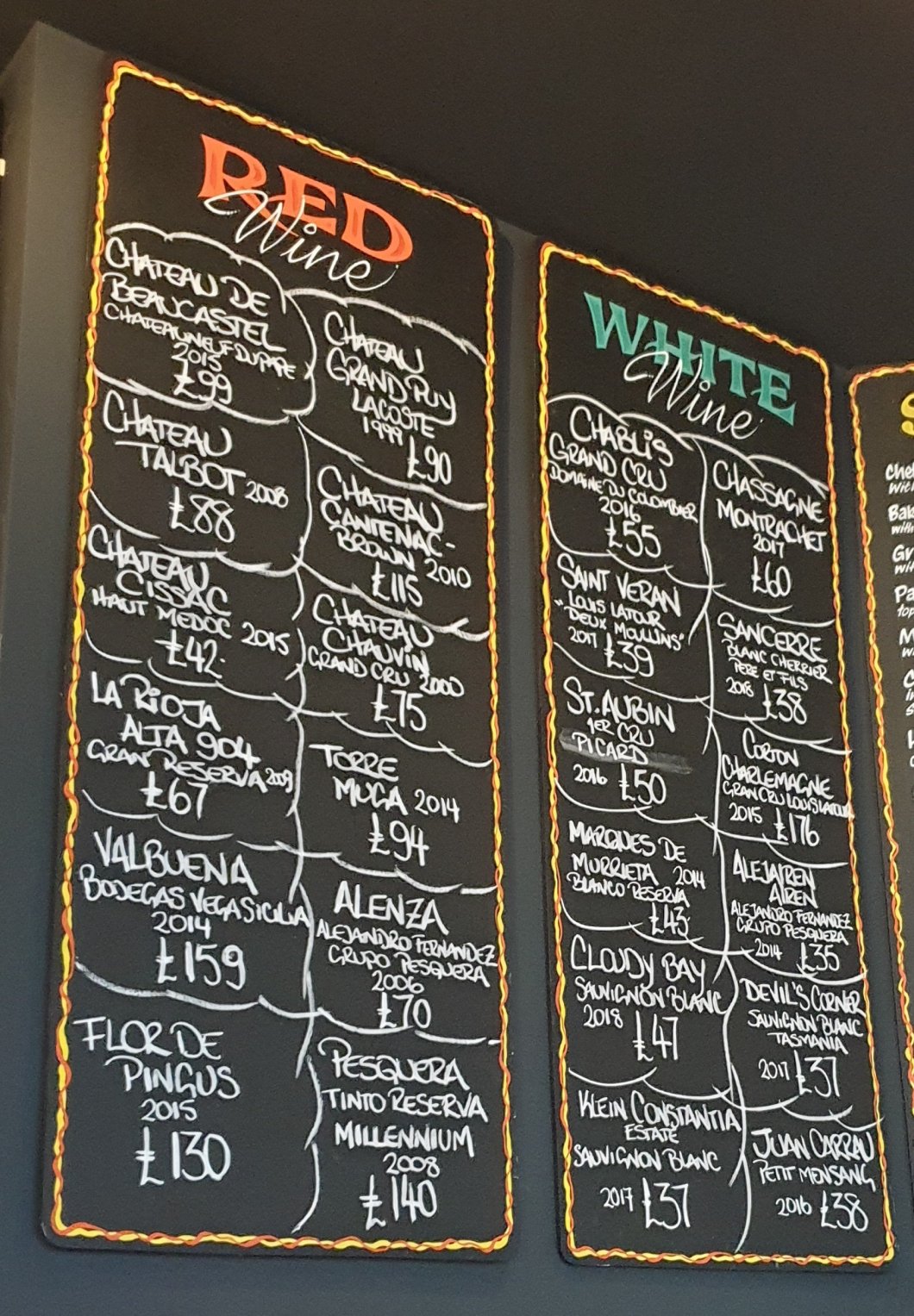 Mark up are pretty good on the top end stuff, with the La Rioja Alta 904 2009 retailing at £55 plus and only £67 on the list. The Alenza 2006 (a Ribera del Duero wine of which I have a case) appears to be a real bargain at £70 as that is mere pennies above what it retails at in the UK. As long as these wines are being kept in good nick, these prices are bargains.

Wine fridges suggest they are,

although (the house red) wines stood up over the bar perhaps less so. 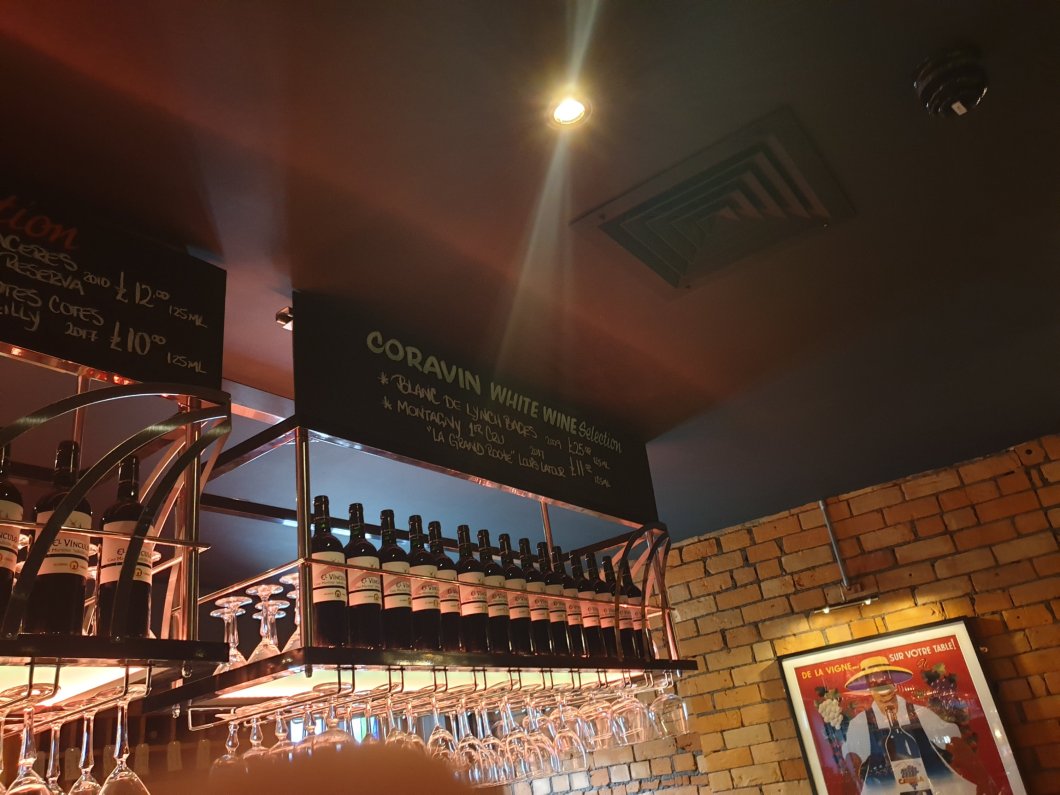 which looks very expensive until you realise this wine retails at £145 a bottle (very nice it is too- have a bottle or two of the 2005 in the wine room).

If you have really, really, deep pockets the Pingus 2006 is on the list for north of a grand (but it retails at over a €1000 a bottle – if you can ever get hold of it)

Plenty of options for fizz drinkers (odd is reference to vintage champagne but no actual vintages listed) too.

prices are generally fair with a large glass (250ml) of El Vinculo (a La Mancha wine from the Alejandro Fernadez Grupo Pesquera stable) being £8.50 when it retails for a round the £15 mark per bottle. This is a pretty good red to have as a house wine.

I also like the fact that they offer fine wines by the glass using the technological marvel that is the corovin. 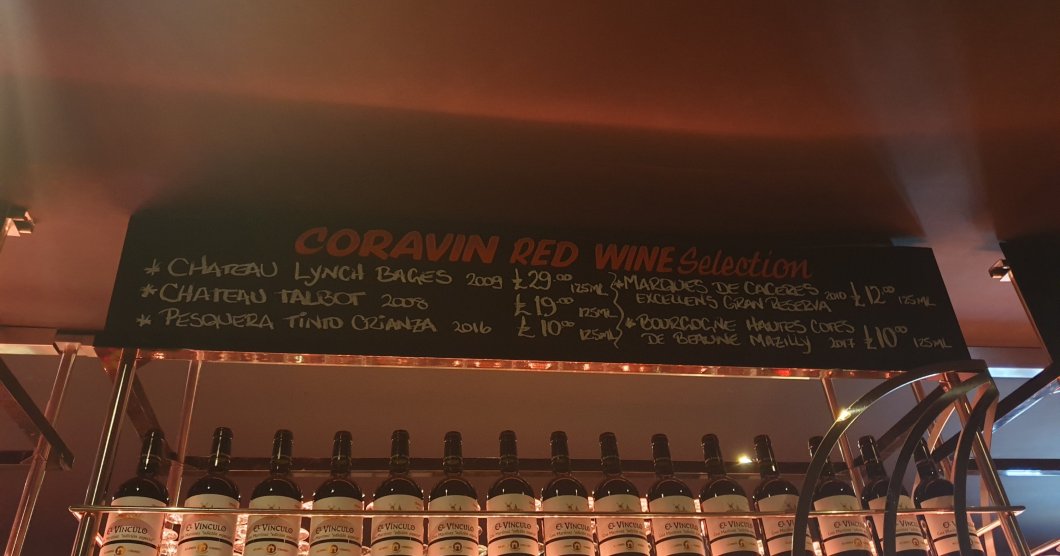 A tenner for a 125ml glass of Pesquera Tinto Crianza 2016, however, seems a touch pricey (odd when the rest of wines seem not to be) when you can pick it up retail for around £21 a bottle.

It was a school day and I was out in the night tasting some very fine New World semillion wines in Bristol (this meal helped fortify me for the task of tasting 15 different wines).

As a result I defaulted, somewhat reluctantly, to a coke. Naught I can really say about that, other than it was wet and wasn’t flat! They could, perhaps, be a bit more adventerous with the soft drinks offering here.

The all new Le Monde is very much like the old one with the rough edges smoothed out.

It is still pretty old school even down to the infeasibly large pepper grinder. 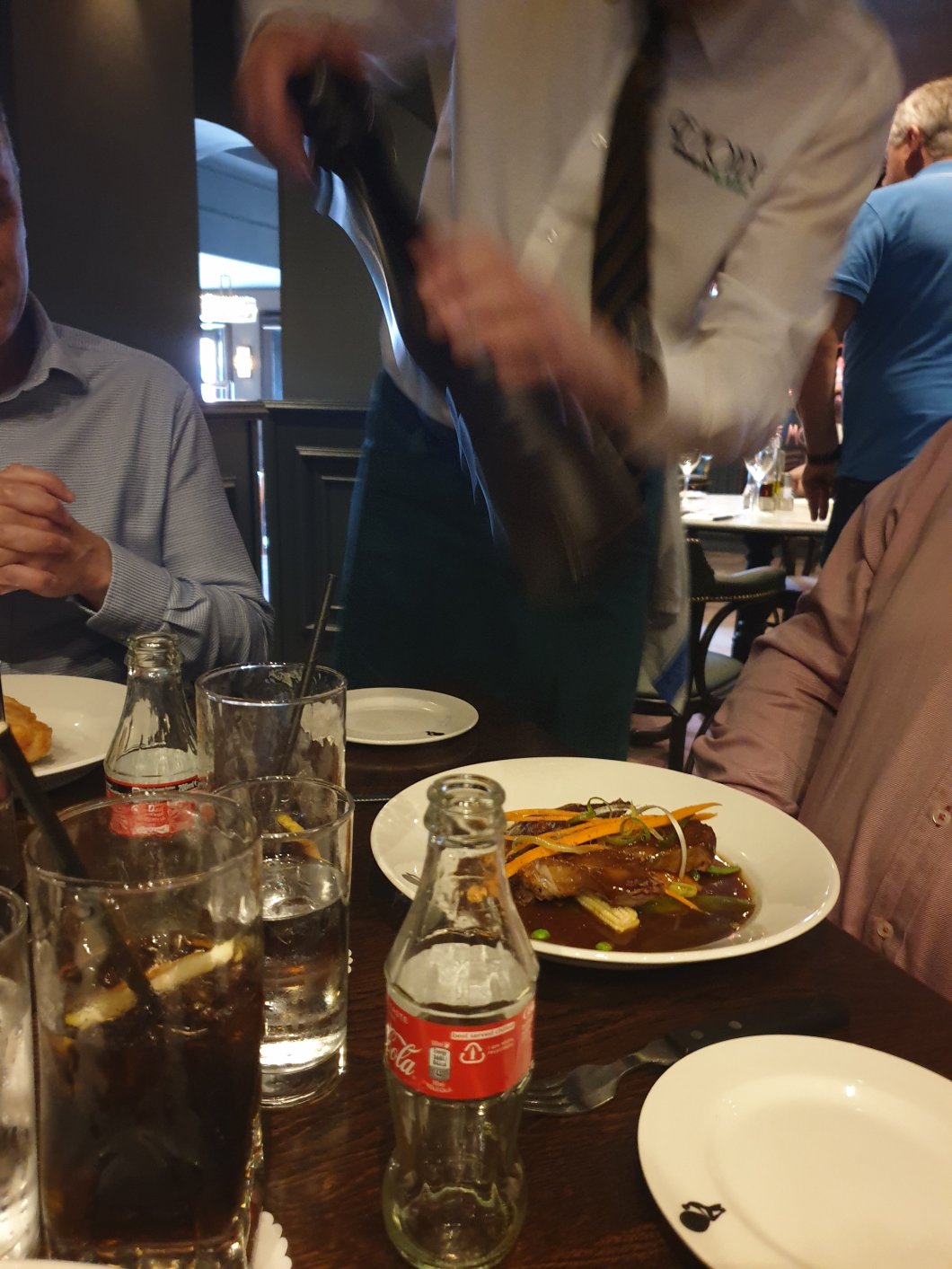 Nothing wrong with that and our lunch time meal (gravy and slightly odd veg. aside) was bountiful, tasty and good value for money. 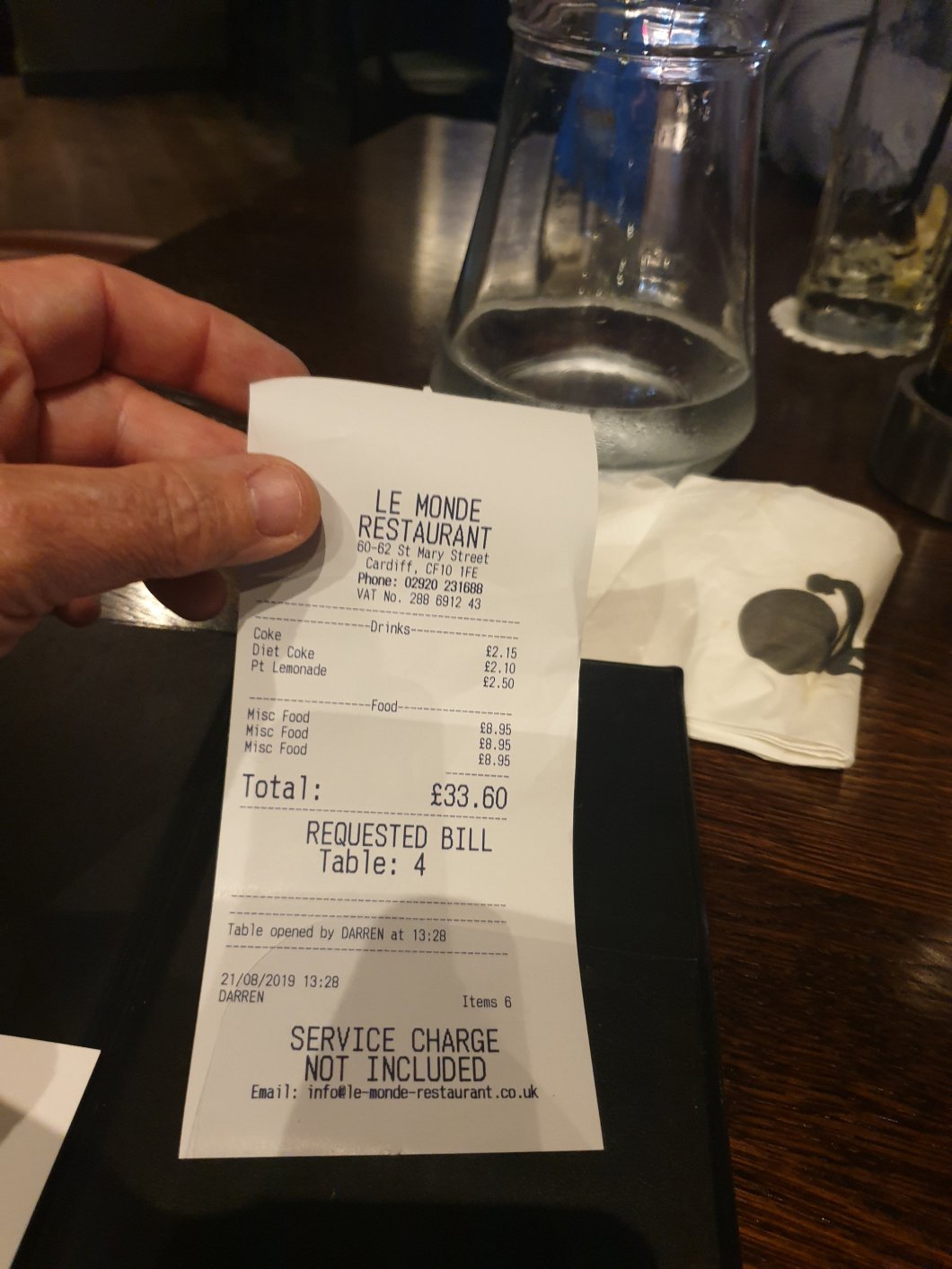 Service was attentive without being obtrusive and deserving of a tip (which proved tricky as we are all old school cash payers and all only had twenty pound notes).

If you like a drop of wine there are seemingly some real (relatively speaking) bargains on the list. I would happily share a bottle of the La Rioja Alta 904 2009 or the Alenza 2006 with someone over a couple of racks of (cooked suitably pink) lamb.

Would I go back? Decent food and some seemingly “out of this world” wine bargains to be had makes it a yes from me.