This post was intended to be a shorter than usual post (I know, don’t fall off your collective chairs), as it is a re-look at a place I have blogged about before in the form of Asador 44. On this basis I had assumed it would result in a more compact post – as it happened it seems not so much.

Someone did ask, recently on the comments section of the blog, if I had considered a more concise approach in terms of posts. I sent them a 20,000 word response saying, in summary, “No, not really ” 🙄. I didn’t, but you know where I am coming from!

Anyhow I digress, Asador 44 is one of (if not) my favourite lunch time haunts in Cardiff. It’s fixed price lunch time menu (£10 for one course, £15 for two courses and £20 for three courses) represents the holy grail for me of top quality food at a wallet friendly price. Can’t ask for more than that can you.

On seeing their revamped fixed price menu online,a mate and I decided to give it a go after a particularly arduous week in work. 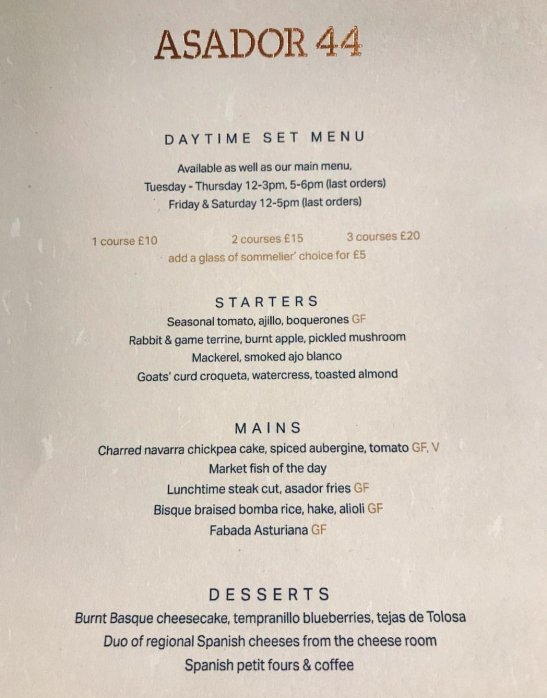 The huge draw for me was the inclusion on the new menu of Fabada Asturiana, a dish I have very much enjoyed on trips to the fabulous Picos de Europa in Northern Spain.

Fabada is an institution in Asturias (along with sidra – if you think Somerset or Hereford is cider country you ain’t seen nothing until you go to Asturias – everyone drinks it there all the time) and it is a permanent feature on the menu in pretty much every restaurant and bar. It consists of a medley of pork products (a mix of most or all of the following: pork shoulder, morcilla, chorizo, bacon and other sausage) in a white bean (fabes) laden broth (with the latter often spiked with saffron).

The base of the dish is the white beans (fabes) with the meat added orginally merely as scraps to supplement the beans and to add flavour to the broth. In Asturias these fabes have an almost religious status and should be unbroken, have a smooth buttery texture and operate to absorb the flavours of the broth they are immersed in. Just like the correct rice is essential to a paella, the right beans are essential to a fabada.

It is one of those simple “peasant” dishes that has become a symbol of a region and with that comes a responsibility to do it right.

There is, as a result (for fear of mortally offending all Asturians – a dodgy fabada could lead to the issue of a Asturian fabwa😀), a need to ensure that all the ingredients are top quality in order to do it justice. Muck about with it at your peril! I was, therefore, more than interested as to the Asador 44 rift on this Asturian treasure – with a strong belief that they would give it due regard.

Before my fabada I had the new mackerel starter. A lovely piece of fish chargilled to give it a crispy skin, with the flesh done à point and full of that rich, oily, flavour that comes with mackerel (very underrated fish).

The ajo blanco (a cold almond and garlic soup) had a lovely delicate nuttiness to it, with a pleasing lick of smoke, and provided a nice cooling counterpoint to the piping hot oily fish. The additional of cucumber adding an nice refreshing element. Top quality cooking here and a very decent portion size. At £5 this was really excellent stuff.

My mate had the seasonal tomato, ajillo and boquerones. 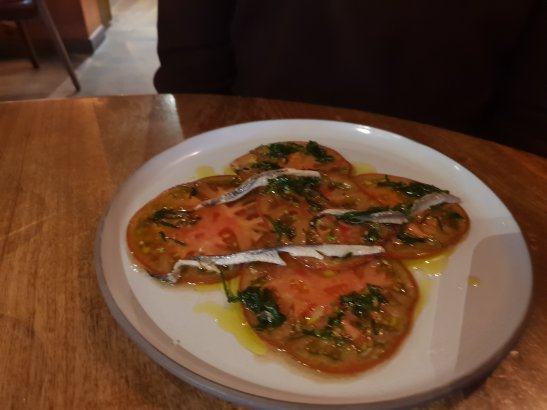 Pretty as a picture, with a taste to match, this simple dish was entirely reliant on the quality of its component parts.

All to often tomatoes here in the UK taste of bugger all, but these had flavour to the max, all accentuated by liberal seasoning, some grassy olive oil, vampire proofing ajillo and those silvery beauties of the briney deep that are boquerones.

On to the main event, my fabada looked and smelt delicious. Paprika rich, meaty, aromas wafted alluring out of the bowl of so much more than meat and bean.

The all important fabes were unbroken, had their trademark buttery texture and operated admirably in their task of soaking up the flavour from the broth. This made them into delectable little flavour bombs. The broth itself had an almost silky texture that coated the mouth, allowing the paprika spiked meaty flavour to linger in the mouth for an age. 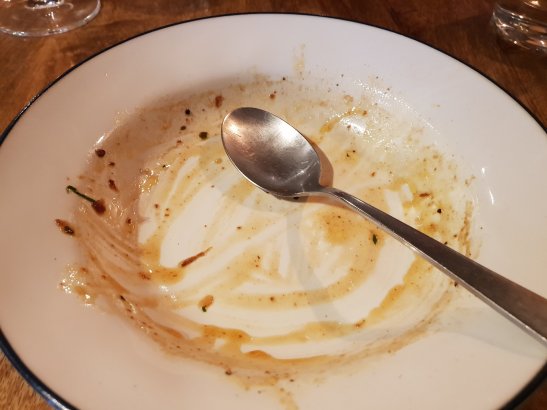 My mate had the fish special, which was a lovely piece of cod.

Beautiful flake to this, with a just past translucent interior. Cooked absolute on the money and seasoned on point, this was a mighty fine bit of fish cookery.

It came with those lovely Asador 44 chips, always a generous portion,

and an intense tomato concoction (a sofrito I think).

particularly the Burnt Basque cheesecake, with a tejas de Tolosa (a sort of almond tuile).

and if the one here is half as good it will be amazing.

We were too full (an afternoon kip in work is rather unreasonably frowned upon) to try this though – next time, perhaps, as am sure I can persuade J to have a dessert.

This Avalon number (£4) on the list at Asador 44 is an attempt to bring to the wider market (in a slightly more commercialised manner) the rustic “hard” ciders you see drunk everywhere in Asturias.

It had a touch of funk to it (less so than many Asturian Sidras I have tried), with its nice, tart, sourness and light carbonation working very well as against the richness of the fabada. My preference is to drink this in the Asturian way – so small slugs necked rather than pouring the whole shebang into the glass and sipping it.

I refrained from the standard practice of pouring the sidra from a great height. With my hand eye coordination it would have ended up, no doubt, everywhere but the glass.

If I was pairing a wine with a fabada I would probably go for something pretty gutsy, such as a Toro wine. Something like this number 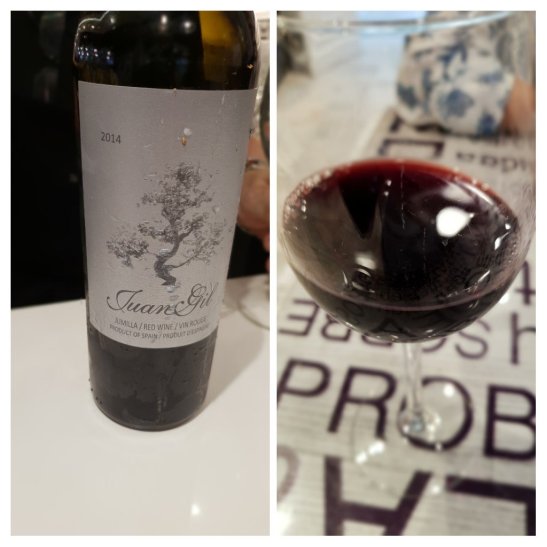 such as this one from Jumilla.

Both these wines have enough oomph about them to cope with the hearty flavours of a fabada.

Asador 44 is rightly known for its steaks, but they offer so much more on the food front with amazing fish and other meat dishes (sucking pig and milk fed lamb anyone). It is nice to see a classic dish of Asturia on the menu and, as with all things Asador 44, they have done it proud.

Classic and classy winter warmer dish this, that is idea in the current Baltic conditions

Still amazes me the value of this offer (is the automatically added service charge new though – don’t recall it previously?).

Difficult to argue against this being the best lunch (based on a value to quality ratio) in Cardiff and, in my opinion with this new menu, it has just got even better.