Tell me why I don’t like Mondays!! Half price pintxos on Mondays at Curado bar, Cardiff City Centre

If you are like me, Monday mornings can be a bit traumatic. A busy week in work beckons and I usually seriously don’t want to get out of bed.

I need something to look forward to on a Monday to get me out of my “it’s back to work” funk.

Readers of the blog will know my love of the pintxos scene in Northern Spain and, in particular, my beloved Donostia San Sebastián.

The ability to try lots of different tasty mini plates of food is very appealing to the glutton and food lover in me.

Nipping over to Donostia for lunch is not really an option, but I can get my Northern Spanish fix in Cardiff through Curado Bar. This is a place that brings the Basque and wider Spanish eating and drinking culture (always sensibly together – you eat while you drink rather than drink and then, once you are sloshed, eat) to Cardiff (along with the stalwart of the scene in the form of Bar 44).

Curado Bar have come up with something that assuages my loathing of Mondays, by playing to my love of pintxos.

This something is their half price offer on their rather fine selection of pintxos all day, every, Monday.

The standard price (across the board) for their selection of pintxos is £3.50, which for the quality is in itself good value, but on Mondays that is reduced to the bargain price of a mere £1.75.

For this you get a choice of some really tasty items, some traditional on bread others more innovative and sans the bread

The offer is not limited to a small number of the pintxos, with it rather gratifyingly extending to every single one they offer.

These little beauties offer interesting flavour and textural contrasts and use the best of Spanish ingredients. In short they are lovely little (actually not so little – two were enough for my lunch) flavour bombs.

I am working my way through the pintxos menu and so far every one I have had has hit the spot nicely. 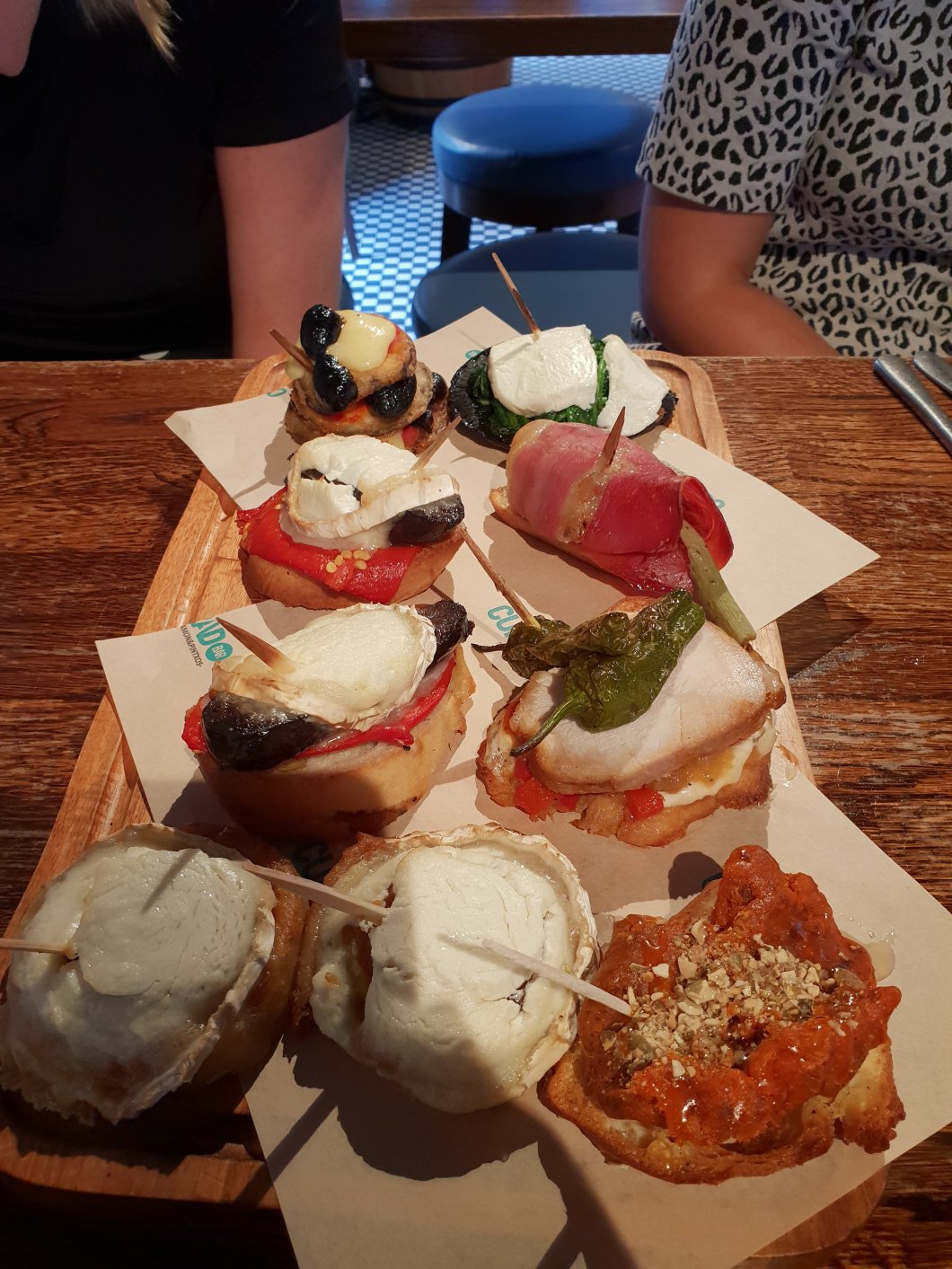 “Lomo de orza con escalivada” entailed a slice of beautifully tender wine and herb marinated pork (with a nice seam of flavour packed fat) sat on smokey roasted aubergine and green (padron or were they Gernika) peppers. This was conveyed to the gob on a nice crisp (but not overly so) slice of crusty bread.

Really nice (and deserving of a really good glass of Rioja or Ribera del Duero to go with it – alas it was a work day lunch).

Equally as good was the simple sounding “Tortilla y allioli”. A lovely soft and rich slab of tortilla (properly seasoned) was sandwiched between a roasted piquillo pepper and a dynamite (ward off the vampires, you’re in the spare room tonight) garlic mayo (aioli). Again easy conveyance to the gob was provided by the bread slice it sat on.

Simple, but oh so satisfying.

On a subsequent visit, I went for the non bread options.

I am a huge fan of aubergine and the Spaniards seem to have special knack with this vegetable (I had some lovely examples of it in Cordoba earlier this year – with the liberal use of this ingredient coming from the place’s Moorish ancestory). Here it was deep fried in a lovely light and crisp batter and paired with Mahón cheese and a rich black olive and fried tomato sauce. 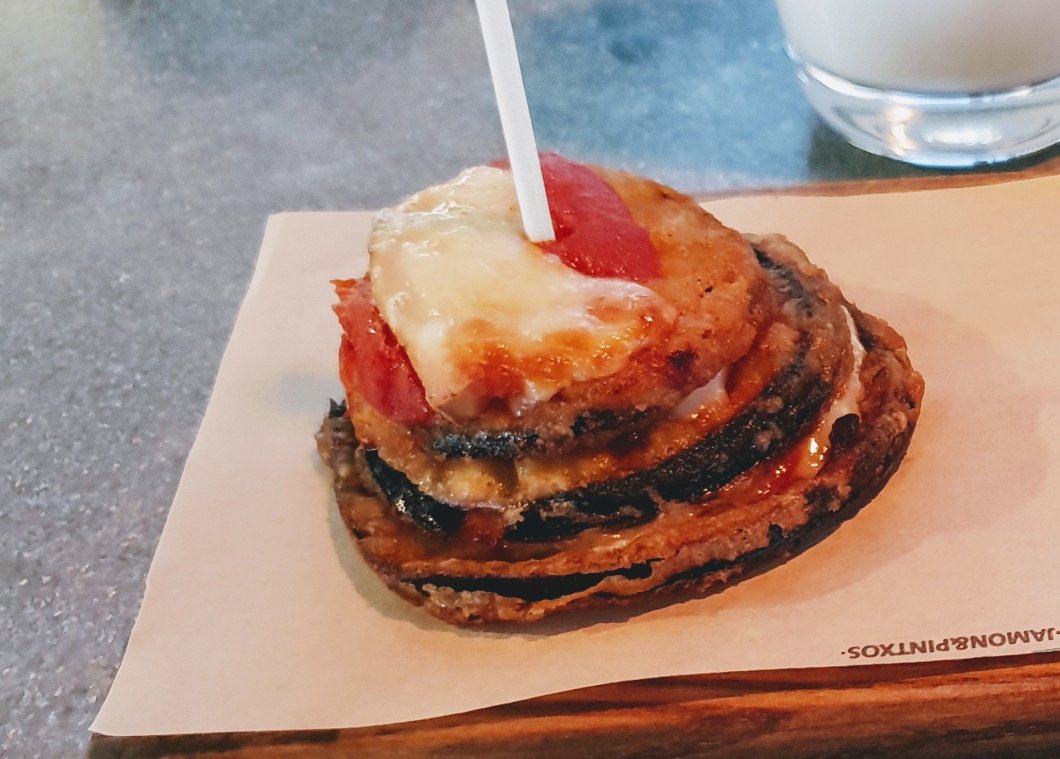 I also has a delightful mushroom number, with an earthy baked field mushroom, iron rich and garlic infused pan fried spinach on top of which sat a light, creamy and tangy block of goats cheese.

For me two pintxos is about right for lunch (although I could easily squeeze in a third or indeed a fourth) and for a mere £3.50 that gets you something really tasty for lunch. Can’t really argue with that, although even if you were a pig and opted for four of them it would set you back a mere £7.

On the booze front, it is nice to see they do a caña size beer.

Good size for a cheeky, work day, beer and nicely priced at between £2 and £3.30

Wine wise they have a nice selection by the glass and carafe, as well as by the bottle. 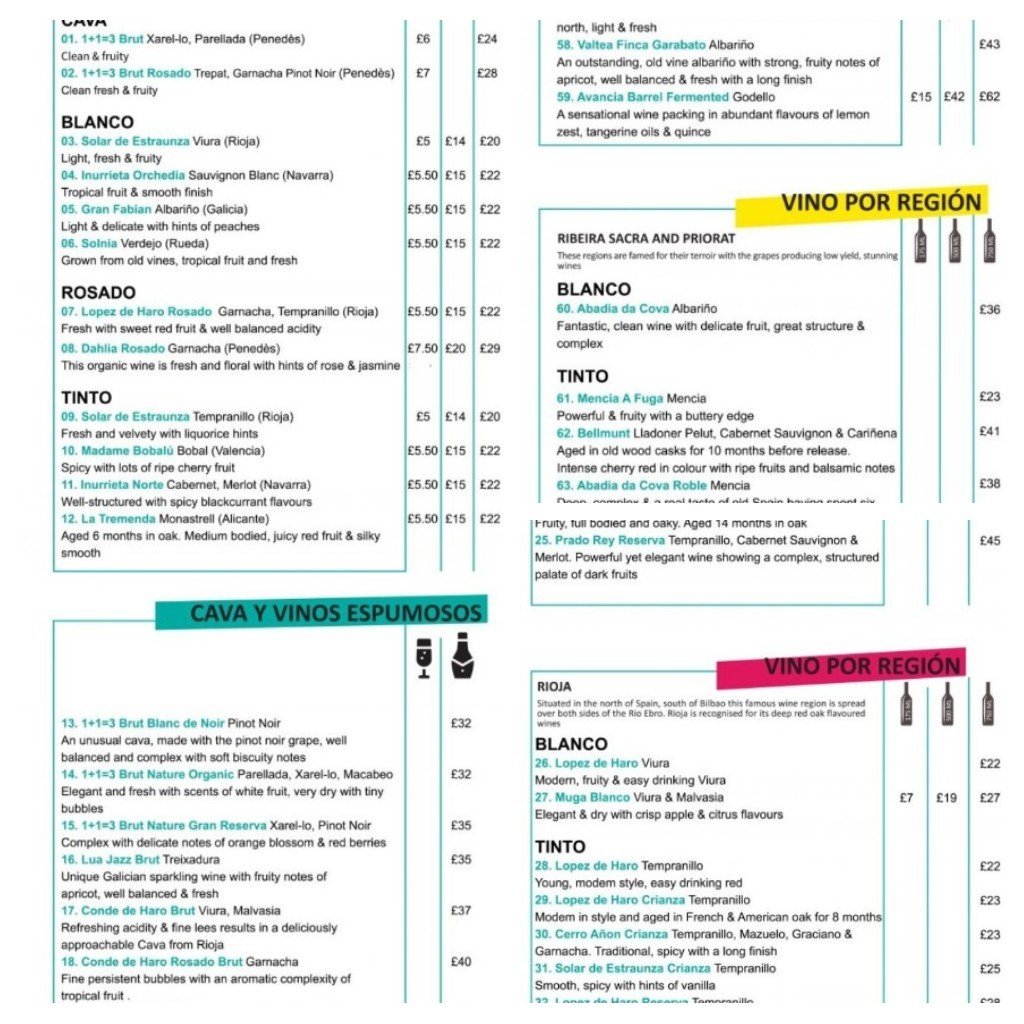 Sherry is a good choice with the varied flavours of pintxos, but the red and whites also appeal.

My only slight disappointment is the lack of a Txakoli (that archetypal wine of the Basque Country – the home of pintxos) by the glass option.

Poured from a height, to give aeration and a pleasing bit of spritz, this is the stuff you see drunk in pintxos bars all over the Basque Country. Very versatile food wine and really refreshing stuff. Something to consider putting on by the glass perhaps, Curado Bar?

On the non booze front drinks front there is a lot of interesting choices (both hot and cold). 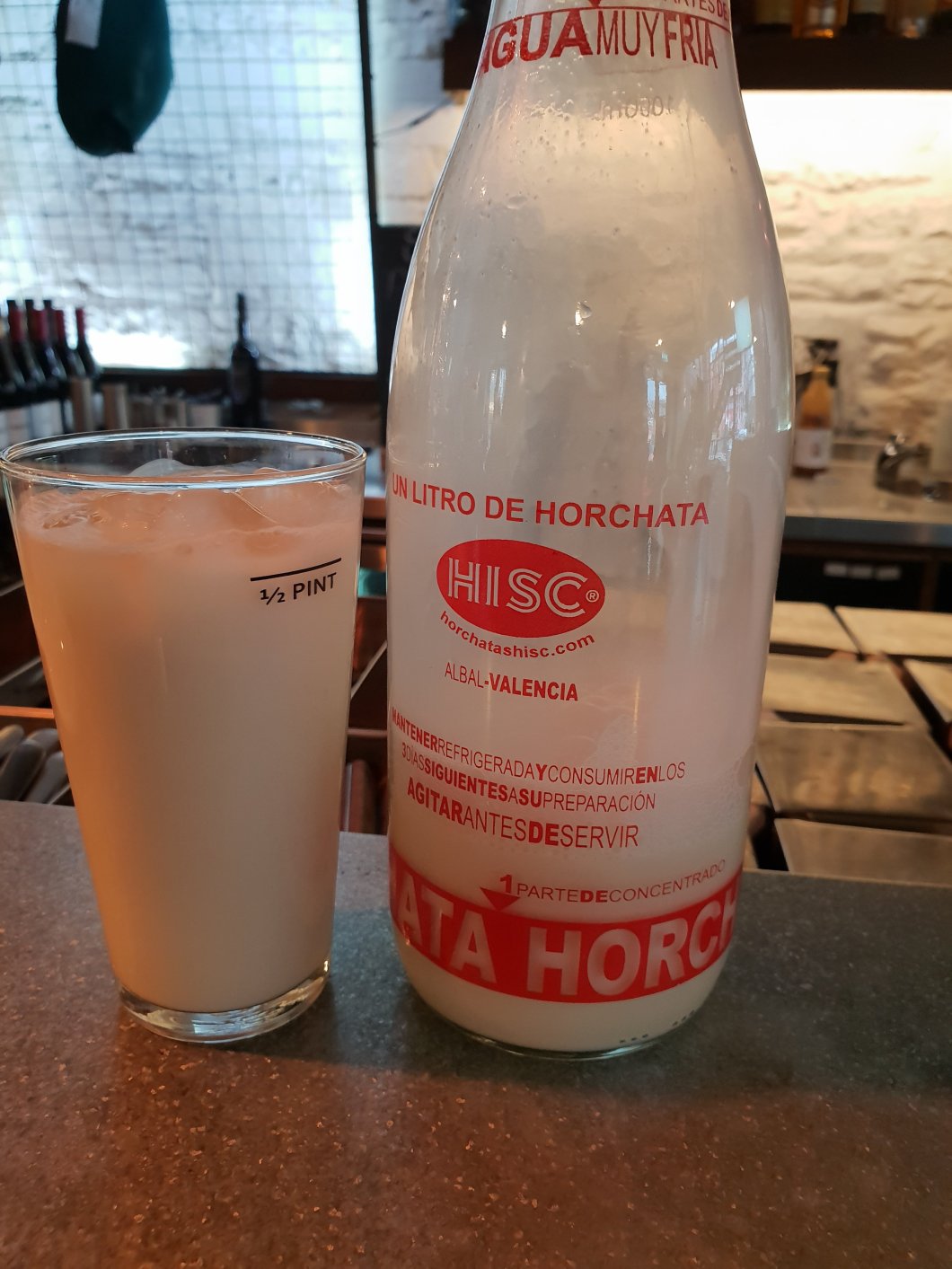 Served over ice, it is über refreshing stuff. Great when it is a bit scorchio.

I think this is a stonkingly good offer. To be able to pick up stuff of this quality for a mere £1.75 is an absolute steal in my humble opinion.

Would I go back? I love this offer and will be there pretty much every Monday going forward. Mmm what pintxos to have next time 😀. 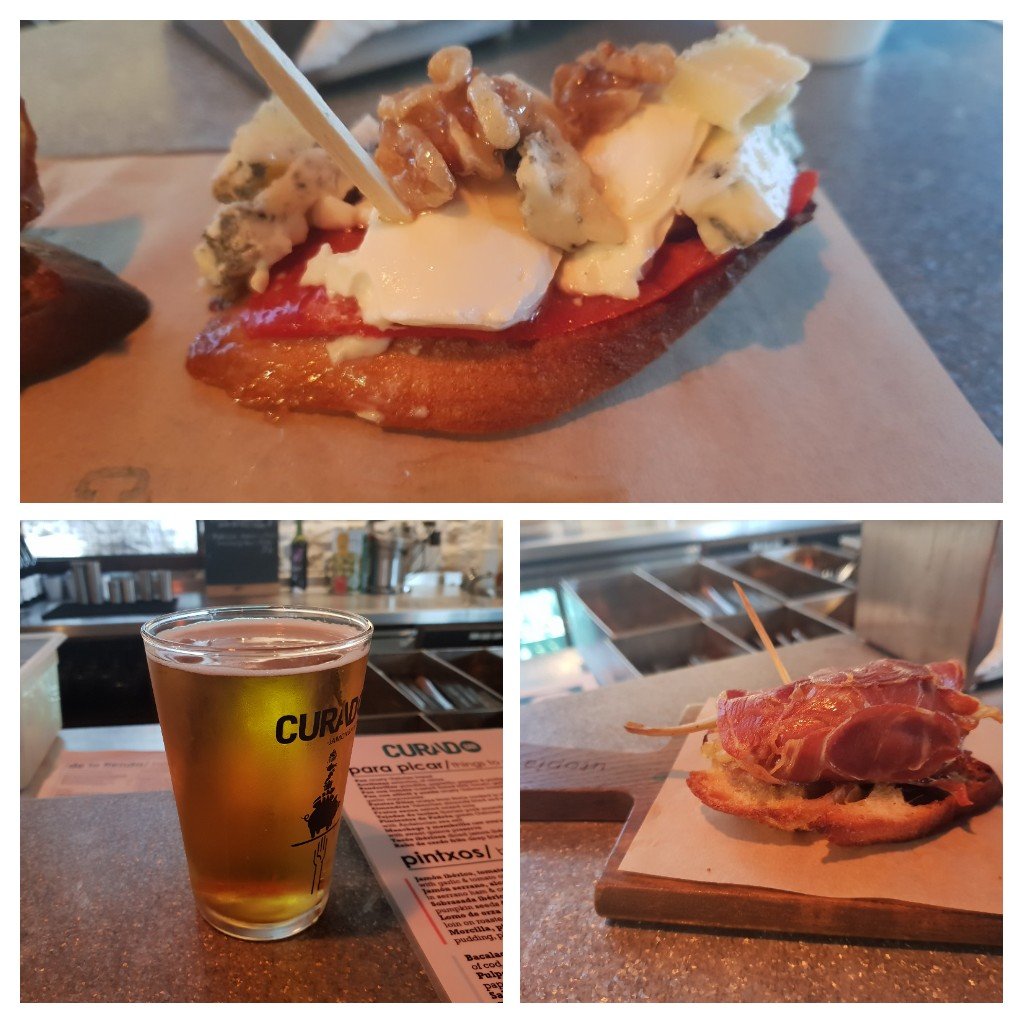