After nigh on a week of gorging on pintxos and Michelin Star dainties in glorious Donostia San Sebastian (please let me win the lottery so I can buy a house there),

Mrs. S.F and I (well me mainly) were in the mood for something more substantial in the form of that vast slab of prime beef that is the Basque txuletón.

The meat for Basque txuletón is from old (up to 18 years old) ex – diary stock (unlike the more famed Galician Blonde/rubia galega, which is from castrated bullocks). It general comes as a rib steak (a ribeye attached to the bone) and has a lovely rim and marbling of yellowing fat (as I always say where there is fat there is flavour).

Last year when we visited Bilbao we ate txuletón at the rather good Casa Rufo (great steaks and cracking wine list), but this year decided to try somewhere different and (based on a number of recommendations and what appeared, on line, to be a bargain wine list choc- a- block full of the cream of Spanish red wines) we decided to go to (the hard to pronounce) Goizeko Izarra (rather conveniently located close to the apartment we rented).

There is a pleasant outside eating area (too hot on the day in question for me) and inside a pintxos bar area (looked very good – wish we had gone back, always next time) on one side (with a cracking selection of wines)

and a nice looking (aircon on – very welcome on the day in question) restaurant area on the other side.

It was quite empty when we arrived at 14.00 on a Saturday (it transpired it had only just opened), but filled up such that it was rammed by 3pm (my advice is make sure you book – they responded very promptly to an email in Spanish). Nice vibrant space, with lots of cheery diners. Quite a buzzy little place, but they do somewhat jemmy you in.

The food is centred around Basque and wider Spanish classics.

On the starter front (all quite pricey, but generally intended to share)

a few things stood out. I love sweetbread, but Mrs. SF is not so keen, and the clams, cardoons (celery on steroids) with jamon and the lomo also appealed. With a view to saving ourselves for the main event we decided to go for the local (in season) Gernika peppers(€6.80) (look very similar to padron ones – the difference seemingly being these are a bit bigger and sweeter in taste).

Mrs. SF and I had each already eaten a few before I got around to taking a photo – so there were actually 12 initially in the full portion.

Very pleasant and nicely charred with plenty of sea salt seasoning. A nice light start to the meal, which (with what was to come) was a good thing.

In terms of the main event we were only ever going to have the txuletón, but this place is also famous for its grilled fish

We saw a spectacular whole turbot being brought out to a table (didn’t get a pic, but it looked and smelt wonderful).

Notwithstanding the great fish on offer, the only thing on my mind was a hunk of beef washed down with a quality Spanish red. As such Mrs. SF and I decided to share the chuletón de mayor (interestingly translated into English, courtesy of Google translate I suspect, as the rather Soviet sounding “steak livestock unit”) priced at a pleasing (for us in the UK) €39.59/kg +IVA (10%) 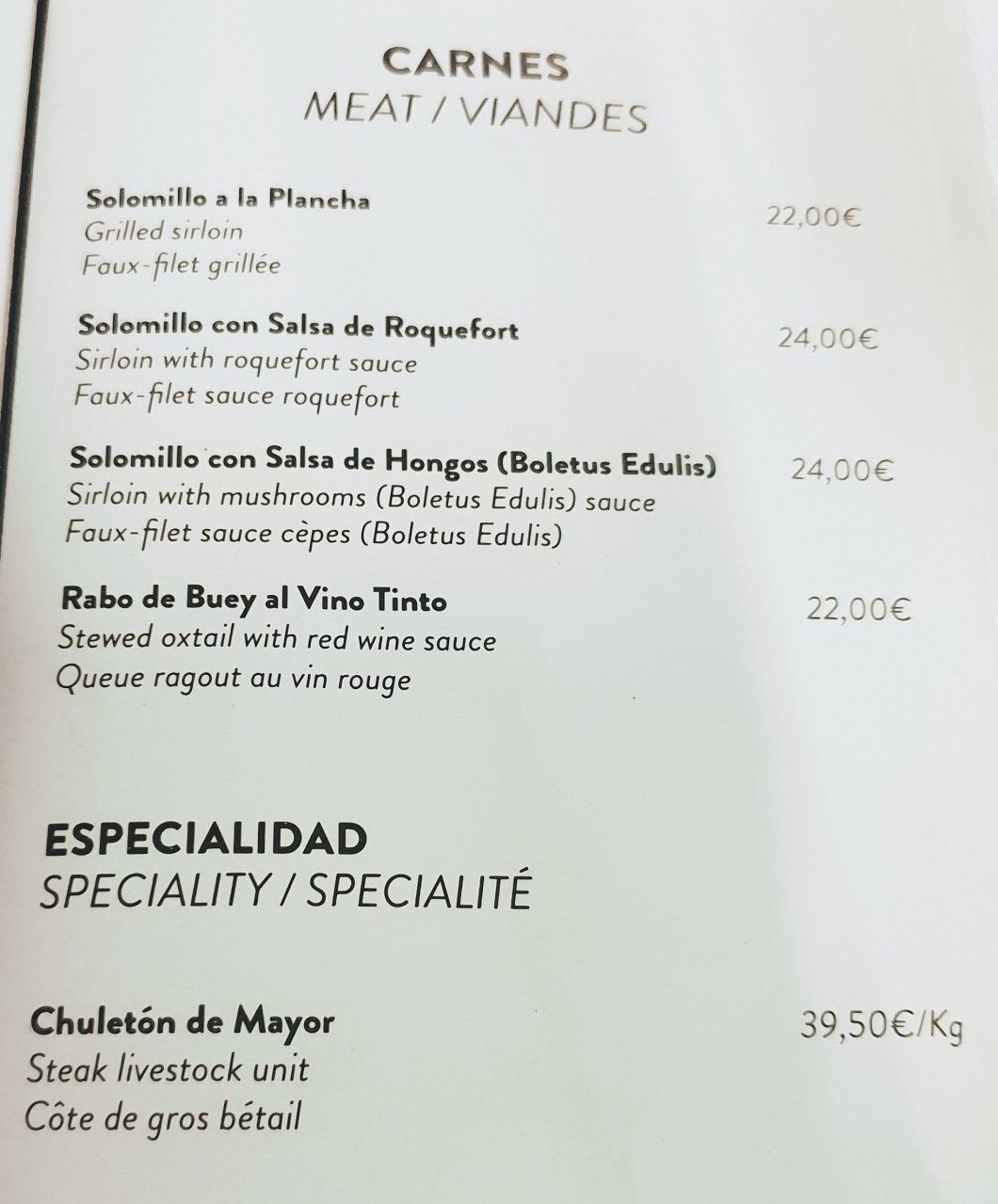 We were asked how we would like it cooked and plumped for medium rare. They seem quite amenable to cooking to any preference (even to doing one half more than the other half), but to me it would be bordering on criminal to have this sort of prime quality meat overdone.

Unlike in most UK steak places (such as Asador 44 or Hawksmoor) there were no detail of weights and prices (on a board) of particular steaks. Basically the kitchen decides the size based on the number of diners.

What arrived was truly a monster of a steak, with lots of lovely yellowing fat around the edge and a very minimal amount of bone.

It was (for me) cooked absolutely à point, with the beautiful (very generally seasoned) crust giving way to a gorgeous ruby interior (with no bloody leakage, indicating it had been properly rested).

Not sure what we would have got if we had requested it very rare/blue, but suspect they may have simple wheeled out a live cow.

The smell coming off the beef was intoxicating, with caramelised fat and beef aromas constantly whafting up. I was drooling pretty much at this point. Think of the best smell when you were a kid (for me well before BSE) of properly aged beef cooking and triple, no quadruple, it and you still don’t get close.

The beef came with a generous portion of fries (dwarfed by the txuleton), which were nice enough if somewhat in awe of the meat. These had a decent crisp to them and were ideal for mopping up tbe residual beef juice on the plate.

No veggies bar from the chips come with the txuletón (like much of Spain eating out here generally results in an alarming lack of veggies) and my advice (every table did this) is to order a simple mixed salad (€8.50 +IVA, but quite large) to go with it – here just lettuce, onion and tomatoes. It had a very nice vinaigrette on it that worked very well in cutting the richness of the meat.

The beef (pre sliced by the kitchen) was the stuff of dreams. Jammed packed full of proper beefy favour and the umaminess you only get from old beef.

It cut like butter and the flavour lasted an age in the mouth.

This was one of the (if not the) best pieces of meat I have every tasted. Stuff that makes you swoon and determined to waste not one tiny scrap.

I was allowed (by Mrs. SF) to gnaw on the tiny bones

and this was the sum total of what was left over from the 1.25kg lump of prime beef that we got.

I was quite full by this stage, but we had a glass or so of the wine we ordered left in the bottle. We, therefore, decided to go for some manchego (€5.50 +IVA). 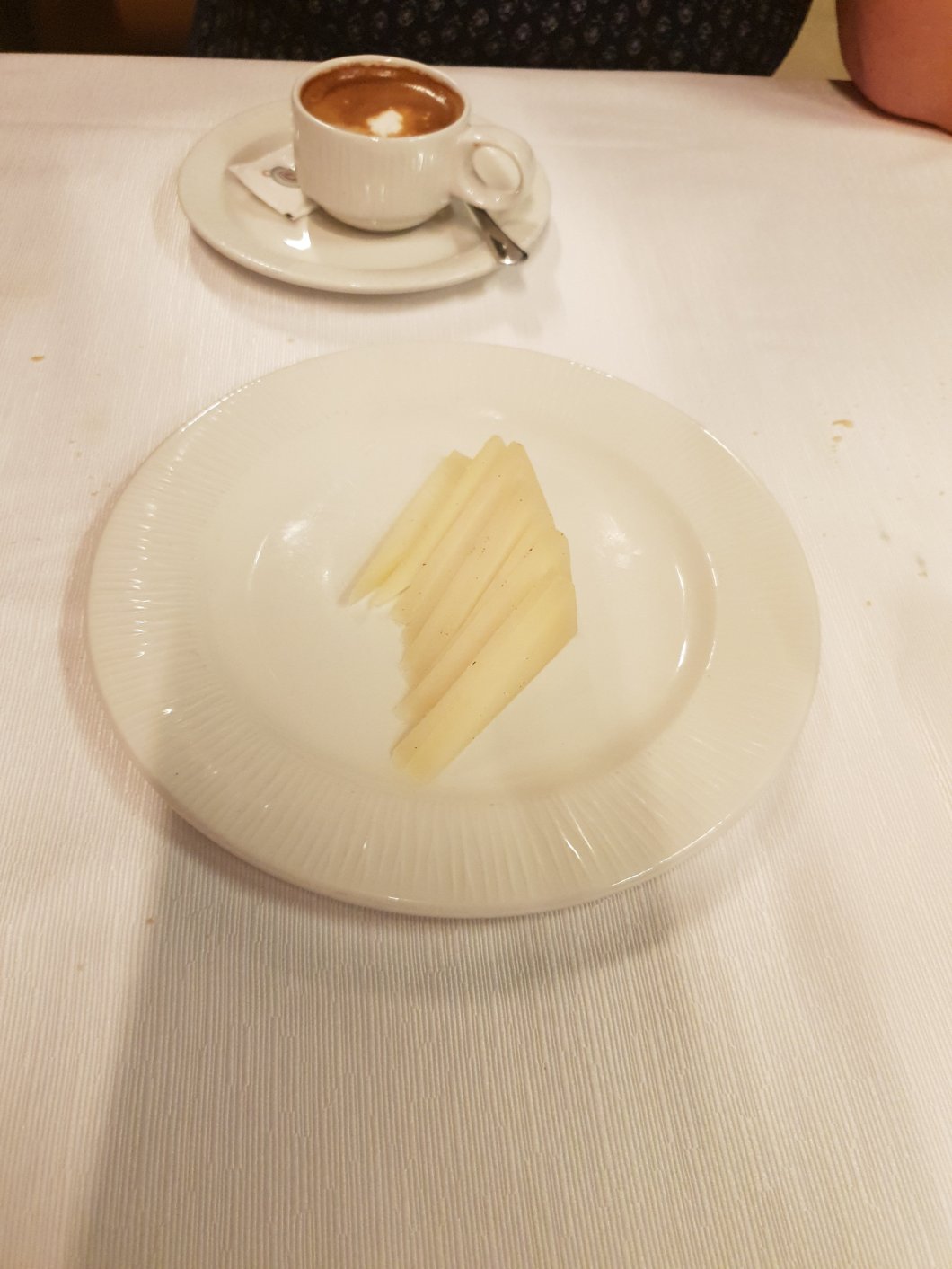 Nice mature example of manchego this (I had already dug in by the time I took the picture, so as with the Gernika pepper the portion size was a bit bigger) and a pleasant way to end a really lovely meal.

The wine list at this place is truly a thing of beauty for a Spanish wine lover like me. Dripping with quality across the board in terms of the wine producing regions of Spain, it offers great wines at prices that puts UK restaurants to shame.

Some of the prices on the fulsome list are outstandingly good

La Nieta, for instance, retails at £88 here in the UK (and a similar price in Spain) and is on the list here at €85 (of course I am assuming the same vintage – but regardless the margin here is at worst miniscule). Moving on to Ribera del Duero, the Aalto PS retails in UK at £50 and is €59 on the list here. 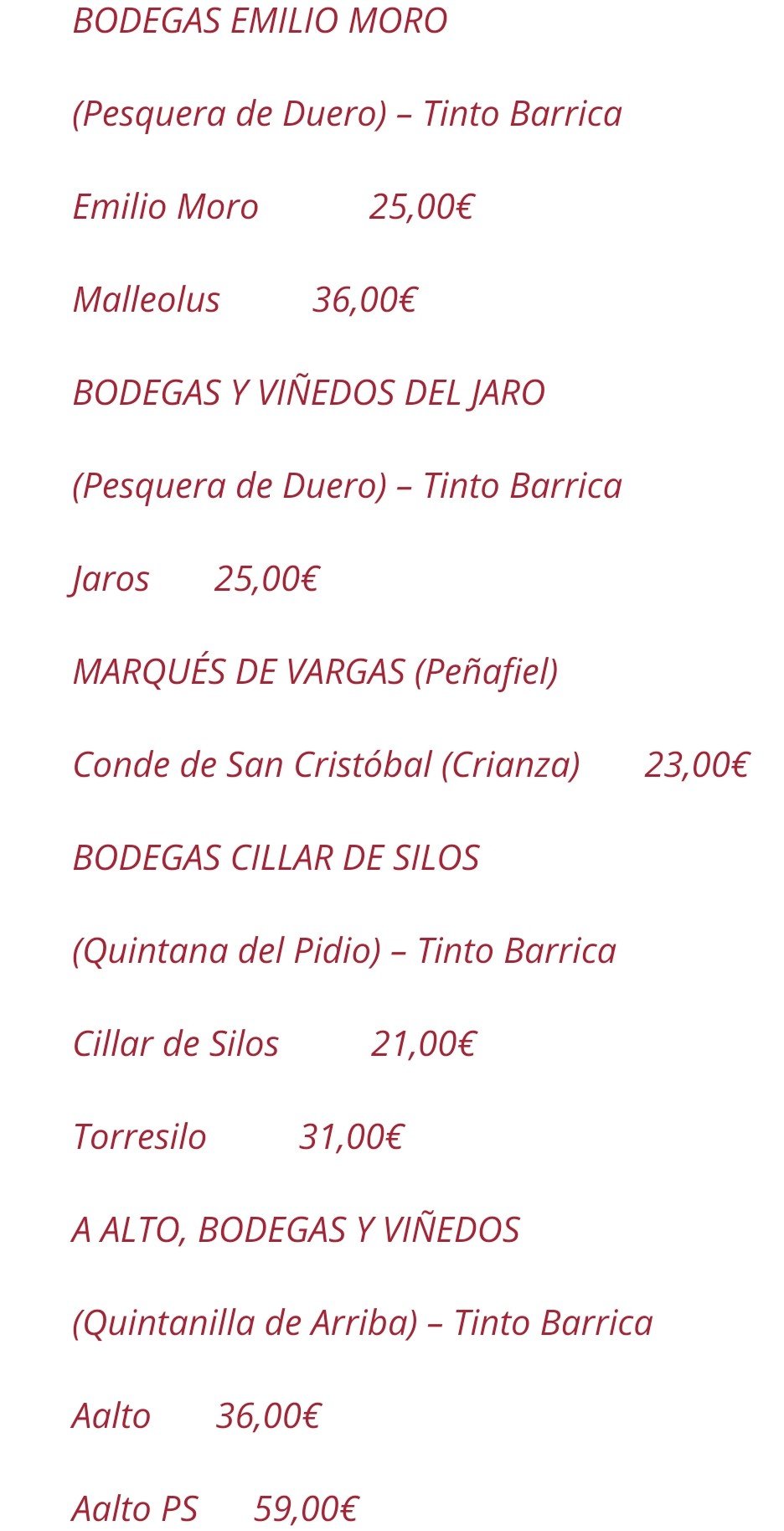 Mark up here are generally under 50% over retail and often a fair bit less. As a result I was totally spoilt for choice.

The house “special” on the day at a mere €20 +IVA offered really good value. 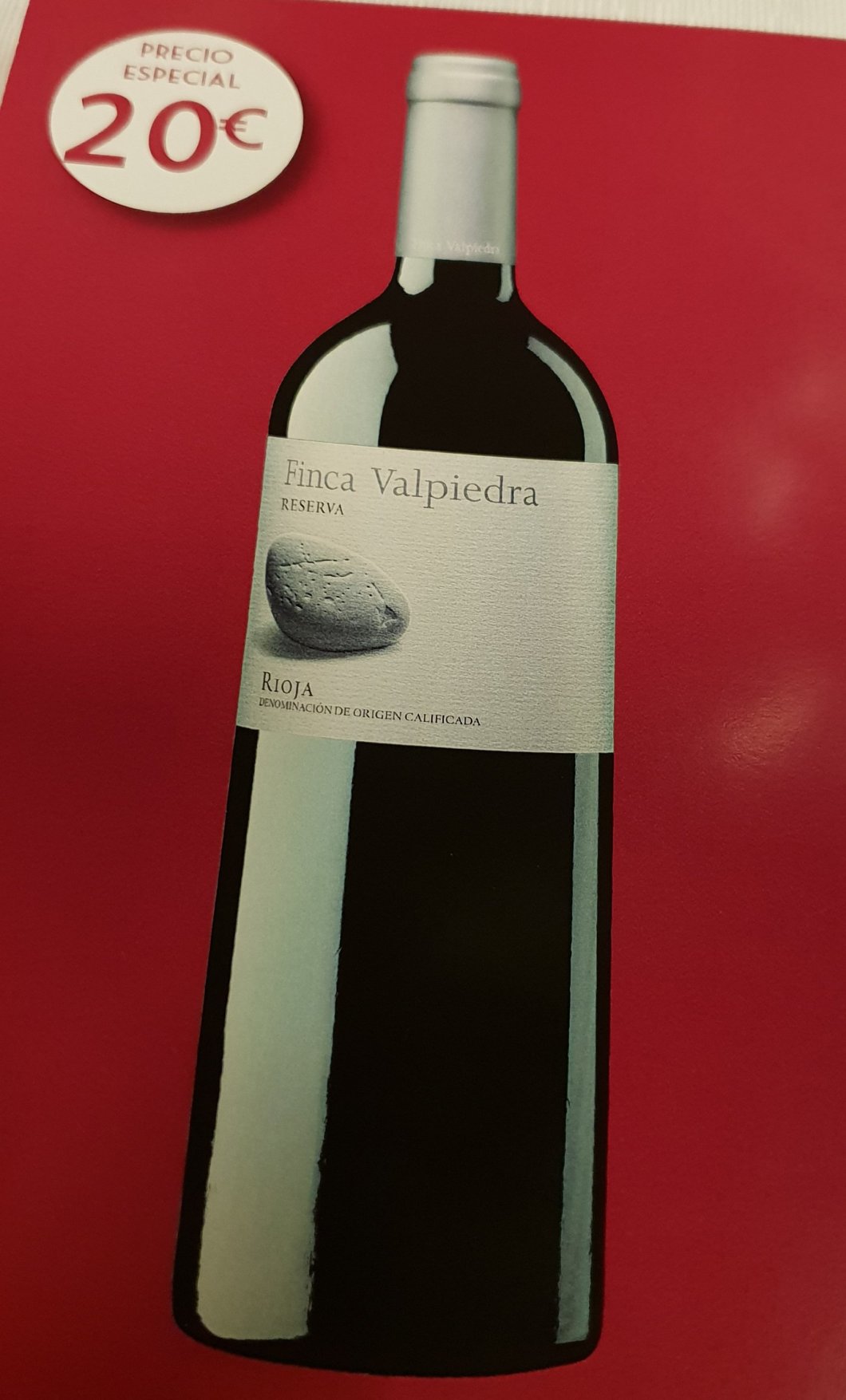 Not sure of the year, but the 2010 of this wine is £22 retail at Laithwaites in the UK. Makes this a bit of a bargain.

The one irksome thing about the list is no vintage details. You have to ask which is a bit of a pain unless you have seriously narrowed down your choice in advance (probably wise and helpfully the list is on line).

Whilst tempting by lots of stuff on the list and the house special, with a big hunk of beef steak, a Toro wine seemed appropriated ( a tasting of Toro wines at the Mystere Wine club this year had really impressed me on terms of the quality wines from this D.O.).

Again these were all very nicely priced

I tossed up the benefits of the Numanthia and the Pintia, but eventually plumped for the San Roman (a 2014) (€34 +IVA). The miser in me getting the better of the spendthrift.

Whilst not perhaps as big a bargain as some stuff on the list (retails generally at around the £24 – £26 mark and seen it on a restaurant list in UK at over £70), this was a truly lovely drop. Heady black forest fruit aromas and a slight toastiness on the nose, it was spiced blackberry and cassis on the palate. A really muscular wine that worked beautifully with the beef.

Drinking very nicely now, but with lots more to give as it matures over time. I will be stocking up on Toro wine, including this one, in the furture (get a lot of bang for your buck with these wines).

We finished off a rather fine meal with a couple of “Wake you up from your meat induced torper” strength coffees. 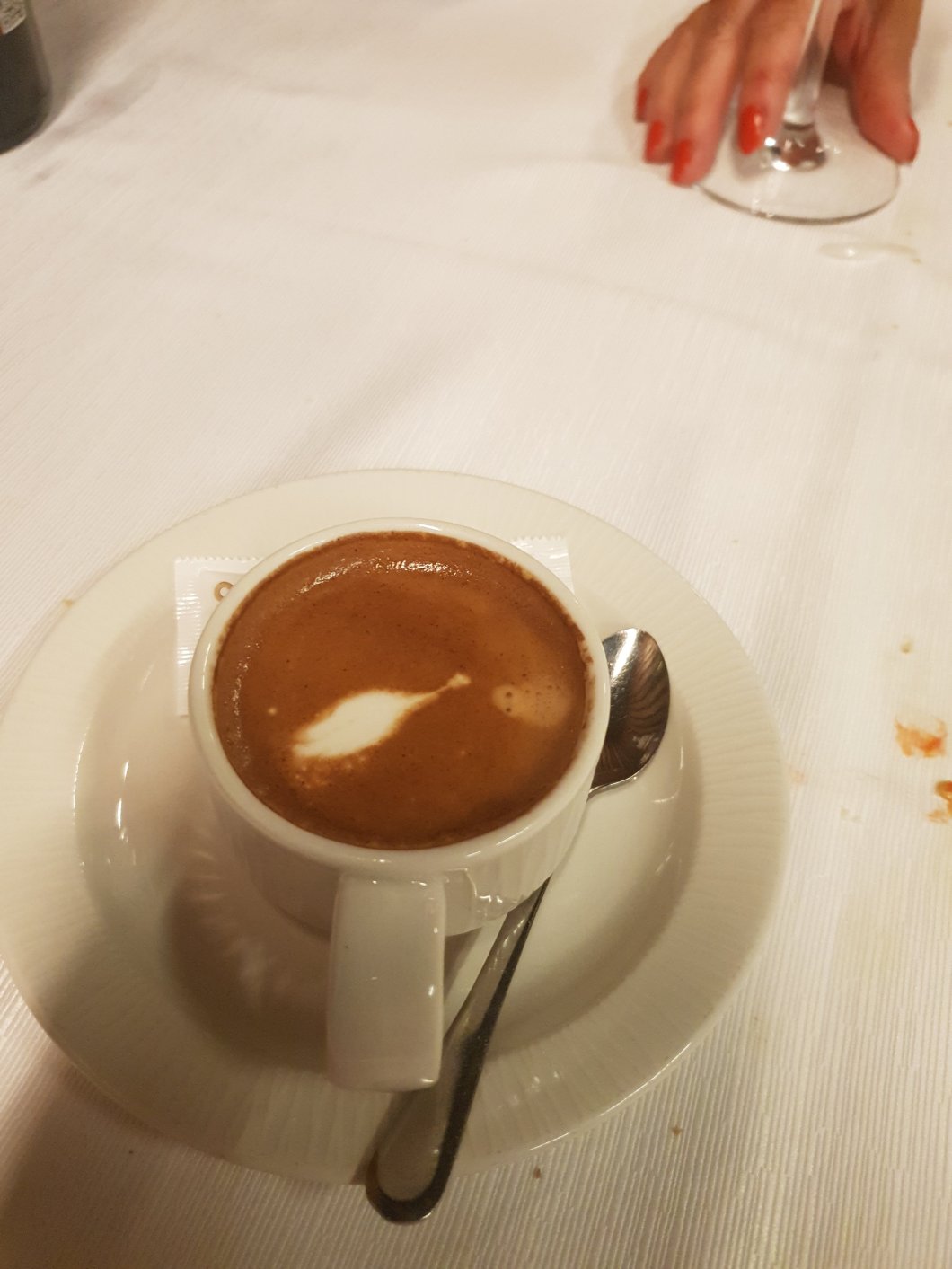 For what we got, the bill of €122.72 (inc IVA) was, to my mind, a bit of a bargain. To get that quality and quantity of meat, the extras and the wine we had, I think, in the UK you would probably have had to pay double or possibly even more. 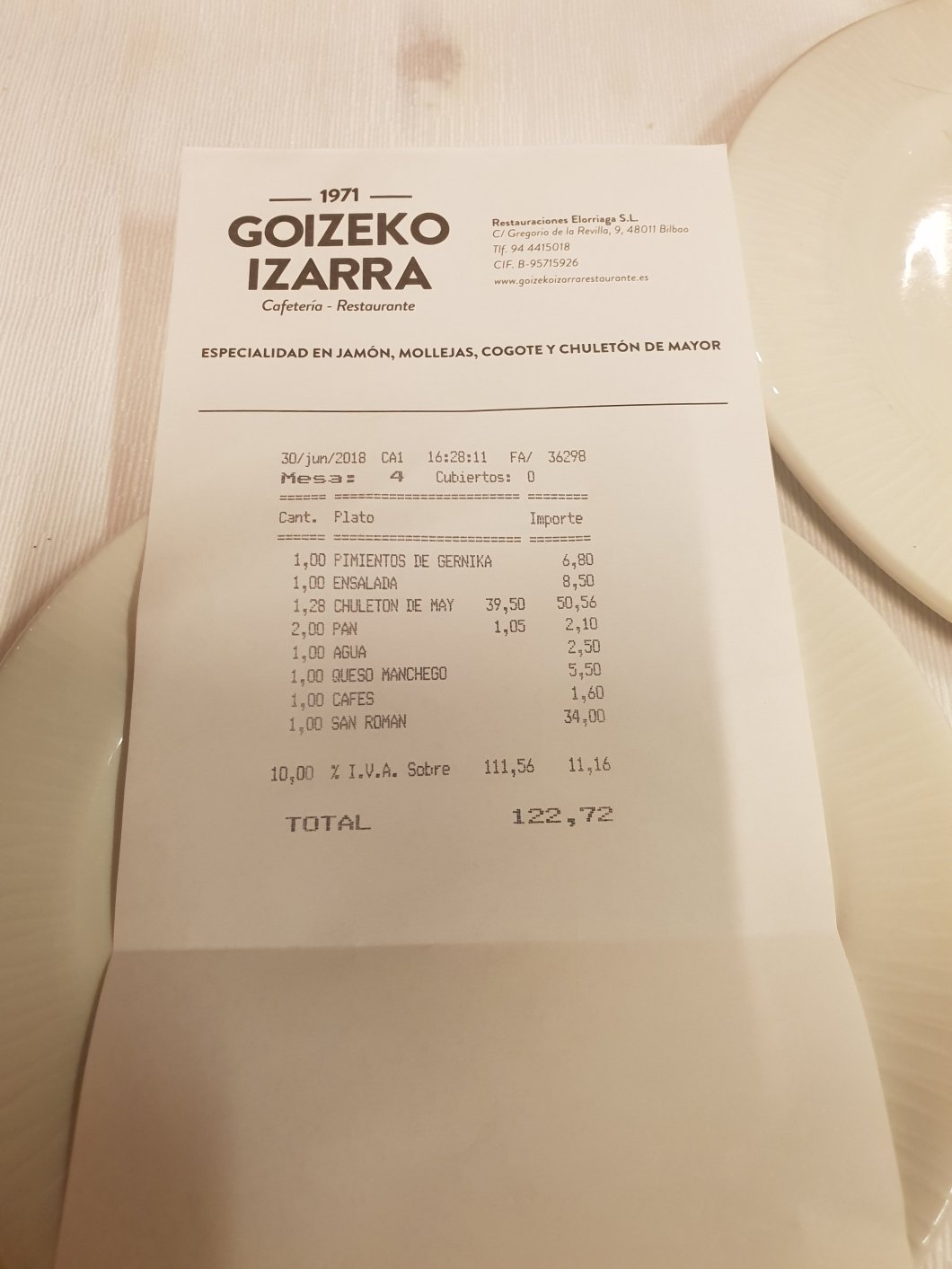 One things to be aware of is all prices on the menu are net of IVA (10% on food and wine in restaurants in Spain) and as a result, the at first sight bargain wine prices on the list need to have 10% added to them in all cases. They are still exceptional good value.

I was, it was fair to say, a very happy and pleasantly sated bunny by the time we ambled out of the place.

We flew from Bristol Airport (flights to Bilbao and back on Thursday and Sundays and stayed in Art Gallery 1 apartment near the Guggenheim Museum and the Museo de Bella Artes (prefer the work displayed in the latter if am honest – too much of a pleb to appreciate the modernist “claptrap” occupying much of the Guggenheim, but it obviously floats a lot of people’s boats and as a result has been a massive boon for the city). Both are useful, in addition to getting your dose of culture, as they have luggage holding facilities. Dump the luggage there wander around the exhibitions, have a spot of lunch then pick it up in time to get a cab for your afternoon flight.

Our apartment was very well spec’d and was in a good location.

Would i go back? Definately – one of the best bits of meat let along beef i have eaten. I would go back to Bilbao just to go back to Goizeko Azarra again, but Bilbao has plenty more to offer on the food, drink and culture fronts.

An excellent city for a weekend break or to tack on a couple of days the end of a longer trip to Spain.