Timetabling a crafty burger and a beer? Burger Craft at The Green Man, Edgeware Road.

On my many visits to London for work, a perennial issue is getting something to eat before catching the train back (usually late, so by the time I get home I tend to have passed the point of wanting to eat much if anything). I am not a fan of either McDonalds or Burger King and currently on the concourse at Paddington Station (my route back to my home in South Wales) the options for a feed are not exactly enthralling (KERB do operate from Paddington, but only twice a month and the dates are yet to coincide with my London visits).

If I have plenty of time, I can take my pick of the myriad of fine burger joints in London (Patty and Bun remains top of my list, but I still have plenty more to try). On many an occasion, however, I am a bit pressed for time and therefore a place very close to Paddington (not much of a fertile hunting ground food wise, as far as I can see, aside from Lebanese joints perhaps) selling burgers would be ideal.

This led me to the Burger Craft at the Green Man pub situated bang next door to Edgware Road Tube Station and a mere 5 minute (admittedly brisk) walk from Paddington (or one stop on the Tube if you don’t fancy the walk), which on an internet search for good burgers in London came up with a fair few positive reviews. 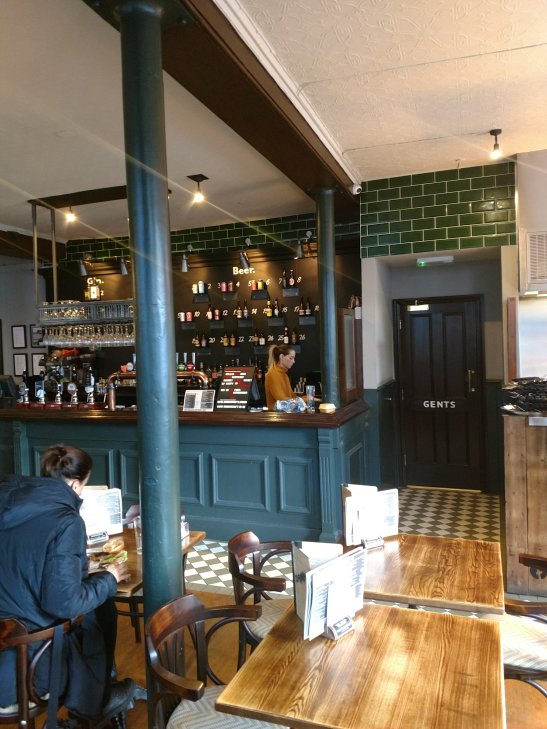 with the Burger Craft “in residency” unit tucked into the corner. I like the fact that you can see your burger being cooked

In summary, a comfortable enough place to have a burger and/or a beer.

The main focus of the food offering is burgers, but there is a wider offering of “tapas” (surely the most abused of Spanish food words) as well.

There are also daily specials, with the one on my visit being a wild boar burger with raspberry chutney, stilton, rocket, crispy apple and shallots (sounded a bit fussy for my burger tastes, if am honest).

I, based on the post title, of course went for one of the burgers. Whilst tempted by their signature “Juicy Bastard” (a seeming behemoth of a burger with two dry aged beef patties), keeping it simple, I went for the most basic of burgers on offer in the form of “The Cheesy One” (£8 with fries or hash browns ).

This was a good burger, with a nicely carmelised exterior crust and lots of nice knobbly bits.

A very generous bit of gooey American cheese sat atop the burger. Whilst needing perhaps 5 seconds longer to melt thoroughly this was far from the sad, solitary, unmelted slice of Kraft cheese you so often get in a cheese burger.

In terms of the all important patty the flavour was very good, with the dry aged beef used in it imparting a very pleasing beefy umaminess, and it was properly seasoned.

The texture of the patty was excellent, hand formed with quite a course grind meaning it had a pleasing looseness (none of your ice hockey puck rubbish here). Definitely a case of good quality meat used in these burgers, with it being from Walter Rose in Wiltshire.

My only qualm with the patty was it was cooked medium to well rather than my preferred medium rare, but I neglected to give a cooking preference so that is fair enough I suppose (I wasn’t asked either, mind). I am unsure as to what the position would have been if I had been prescriptive (other reviews seem to suggest they will cook them medium rare) as to my preferred level off doneness. I will give them the benefit of the doubt.

The glazed brioche bun was nice enough, if a touch greasy, with it just about surviving to the end without collapsing. Adding nicely to this was a good, tangy, burger sauce and some crisp (rather than the all to often limp) foliage.

All in all a decent burger I thought.

The £8 price tag included a choice of fries or hash browns. I went for the former (skin on numbers), which were fine but didn’t really wow. Could have been a touch crisper and a tad hotter, I thought.

The whole package, at £8, was very good value especially when you compare it to Cardiff prices – with a cheese burger and fries at the Grazing Shed coming in at £10.40. The Burger Craft offering was cheaper and better than the Grazing Shed offering.

I am not a hophead by any stretch of the imagination, but the beer wall in this pub looks pretty good for those that are.

Lots of interesting stuff from a wide variety of UK (and further afield) craft breweries (some of which even an ignoramus, beer wise, like me has heard of), which I suspect would be of interest to proper hopheads.

I, only twigging the drinks menu after I had gone to the bar, ordered a (nice enough, but rather pedestrian in comparison to the “Beer Wall” offering) Meantime London Pale Ale. 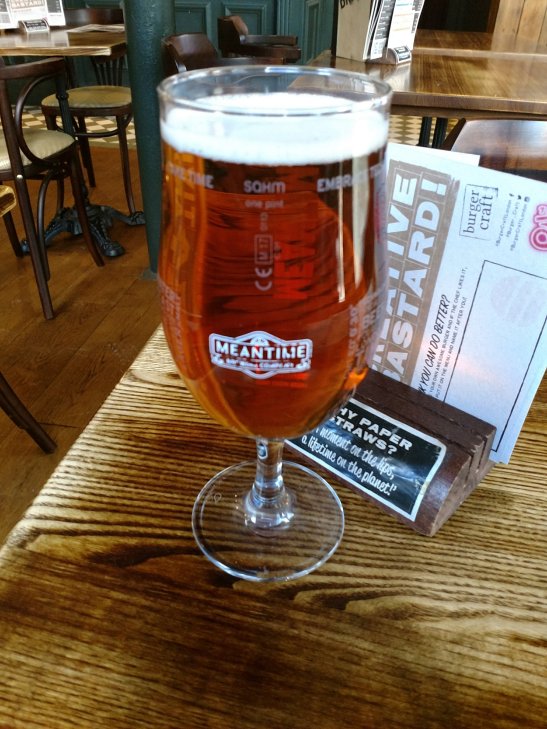 Nice citrus notes and hoppy, but not overpoweringly so. I thought it went rather well with my cheese burger and fries, although it was not the beer pairing suggested by the menu (lager was their suggestion – which I though a tad boring). 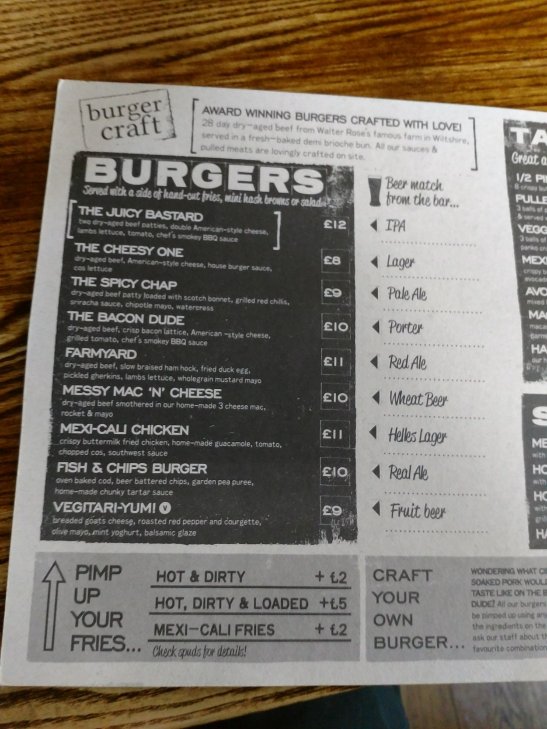 On the wine front there is a short, but not uninteresting list (ghastly white zind. aside). 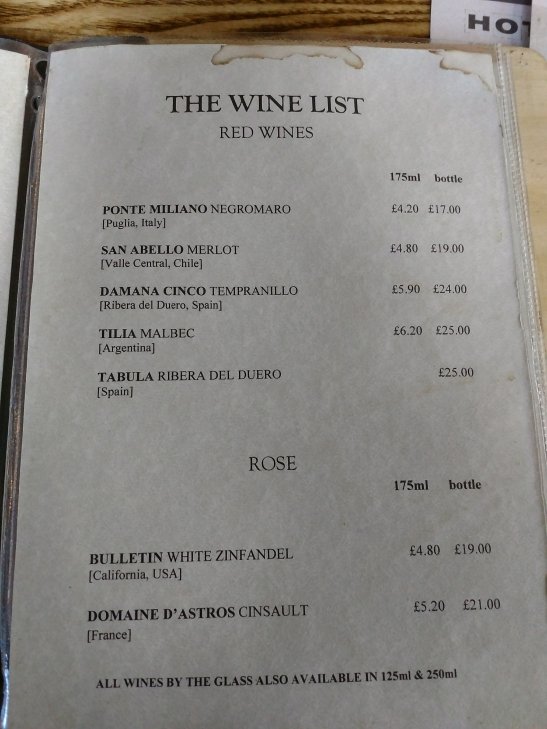 Prices are not hideous, with the Damana Cinco retailing at around the £10.50 mark and on the list here at £25. The Tabula (if it is what I think it is – being the top wine from the same winery as the Damana Cinco) is very oddly priced (in a good way). It retails for around the £26 mark and here it is the same price (£25, which is very odd if it is the actual Tabula wine as per the link) on the list as that of its stable mate, the Damana Cinco, but retails at over twice its price. A typo or a misleading piece of list writing (is it actually the Tabula I wonder) perhaps, but it is worth checking out as if it is the wine it should be (based on wording of the list) it is an absolute bargain at £25.

Whites and fizz are also in offer

I was rather pleased with my find in terms of Burger Craft at the Green Man. Whilst it is not among the top eschelon of burgers in London, it was a very respectable burger at a reasonable price. Add to that a very convenient location for those getting the train back West and an interesting selection on the booze front and it makes for a pretty good option if you are in that neck of the woods.

Will I go back? Definately – ideally located for me if I need food before catching train and I am a bit pushed for time

If you are really pushed for time they also do takeaways, which is handy.