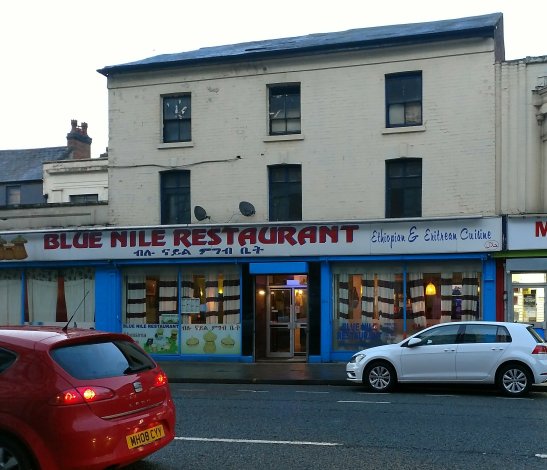 I like to think I am pretty well versed in the cuisines of the World, having travelled a bit. A region, however, I have had very little exposure to on the food front is Africa (other than the Countries on the Med – Egypt et al and also at the other end – South Africa, with biltong helping me kick the smoking habit nigh on 25 years ago). In particular, the food of the Horn of Africa (which includes Eritrea and Ethiopia) was until recently a total mystery to me.

Work stuff in Birmingham, which both J and I had to attend, presented us with the opportunity of dinner before the train back to Cardiff and looking for somewhere a bit different I happened upon two places that specialises in Eritrean and Ethiopian cuisine.

One (Savanna) was closed on the day of our visit, but the other (in the form of the Blue Nile restaurant) looked more than interesting. Whilst the food of the Indian subcontinent is the obvious choice when eating out in Brum (a place that could lay claim to being the UK’s curry capital, although Bradford would most certainly beg to differ), a look at the sort of food on offer at the Blue Nile sealed the deal for me and J was happy enough to go along with my choice.

The cuisine is (based on a cursory internet search) described as a sort of blend of Arabic and Indian food, with meat and vegetables stews (wots/wats – hence the post title), packing some heat, all brought together by an injera (a fermented soudough flat bread with a somewhat spongy texture). The injera acts as both an edible plate and cutlery.

The outside is a tad on the tatty side – doesn’t really lure you in have to say.

Inside it is pretty spartan. Reminded me a bit of the lounge area of the club in Phoenix Nights. 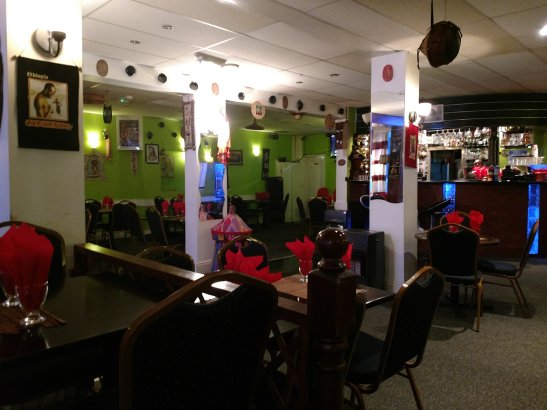 It is big ole space (we arrived at 5pm and it was pretty empty, but it did fill up) with assorted oddities on the walls.

In short you don’t come here for the décor.

The food seems to be geared up for sharing a number of meat and vegetable dishes so J and I decided on the Blue Nile Special for two.

This consisted of ten veggie and meat dishes, served on an injera,

These were as follows :

Misr Wot – a split lentil sauce that packed a wallop of heat;

Defen Wot– another lentil stew (but significantly milder than the Misr);

Yebeg Keye Wot – chunky lamb stew, with berbere (a hot pepper spice mix that is a staple of Ethiopian and Eritrian cuisine), onions and herbs;

All of this sat on a large injera. We also got a basket of rolled up injera (in lieu of cutlery – you use the injera to scoop up the wots etc. always with your right hand).

We were (ever so) slightly worried when contemplating tucking into the stuff in the basket (they looked suspiciously like bits of carpet underlay) that the waitress would rush over and tell us not to eat the napkins.

This fear evaporated when we tried one. It was akin to a cross between a slightly sour untoasted pikelet and a Scot pancake/hotcake, with a quite spongy texture. We tasted a bit of it on its own and our first impression was mmmm not sure about the sourness or the texture, but they actually worked very well as a vehicle to convey the various wots into the gob. The spongy texture operated to soak up the sauces and the slight sourness worked well as against the spice and heat of the various wots. We demolished the basket in no time.

Whilst individual wot portions were quite small (a dollop of each, bar from the larger portion of the Doro Wot Firfir) cumulatively (with the injera) it all filled us up quite rapidly and we were left in the end with the large injera that the wots had rested on.

Whilst stuffed at this stage I tried a bit and concluded we had done it all wrong. This was on the basis that the large injera had (with its spongy texture) soaked up lots of the sauce and flavour from the wots.

Lovely as it was, we were too full to take proper advantage. Lesson learnt for next time.

In terms of the assorted wots, the star of the show for me was the Doro Wot Firfir. 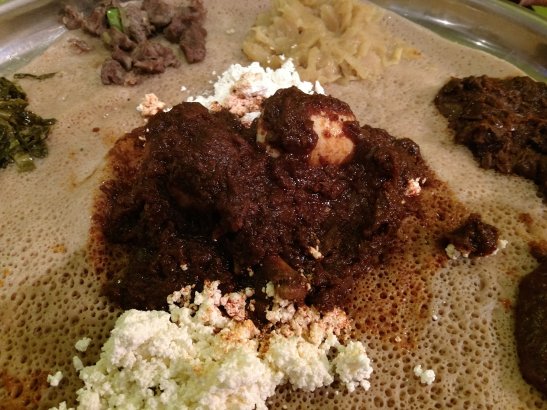 The fiery, but not unpleasantly hot, berbere infused sauce camouflaged an egg and a chicken leg (the former more evident than the latter). I, assuming there was just the one egg showing and being greedy, went for the egg. J then, after a bit of digging, gleefully found and immediately baggsied the chicken leg. She did eventually allow me a bit, but she took the lion’s share.

Full of flavour this was a really nice dish, with fresh cheese (described as cottage, but more akin to a queso fresco) applying a nice cooling touch.

All the meats and vegetables in the other wots were very nicely cooked and spiced with the meat very tender and the veg and pulses not over or undercooked.

All in all very enjoyable and quite fun – J thought the chicken and egg issue (the egg, much to my chagrin, definitely comes first) was hilarious!!!

On the drinks front, the traditional tipple (booze wise) in Ethiopia and Eritria is Tej, a honey wine/mead flavoured with a indigenous herb. It, supposedly, has a hoppy taste to it. Very much a home brew kind of drink, it is also served in Tej houses throughout the region.

I was a little sceptical about trying it, but egged (there were lots of egg jokes that night) on by J I decided to give it a punt (it was only £2.50 for a small flask). 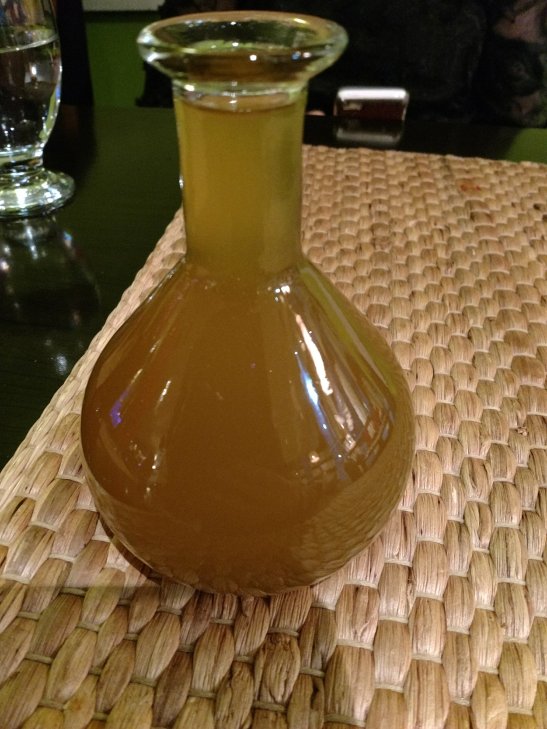 Looking alarmingly like what a very dehydrated person might pass via a catheter, I gamely gave it a go (J passed – labelling me, after egging me on to try it, a mad man for ordering it).

If I am honest, it was not my cup of tea. I don’t really have a sweet tooth and it was overtly sweet with a touch of yeasty funk and varnish/diesel to it, rather than the supposed hoppiness . An acquired taste methinks and one I certainly did not acquire on my first taste. It was thankfully pretty cheap.

I will stick to the beers, of which there were a few Ethiopian ones (all £3 a pop), if I visit an Ethiopian place again. 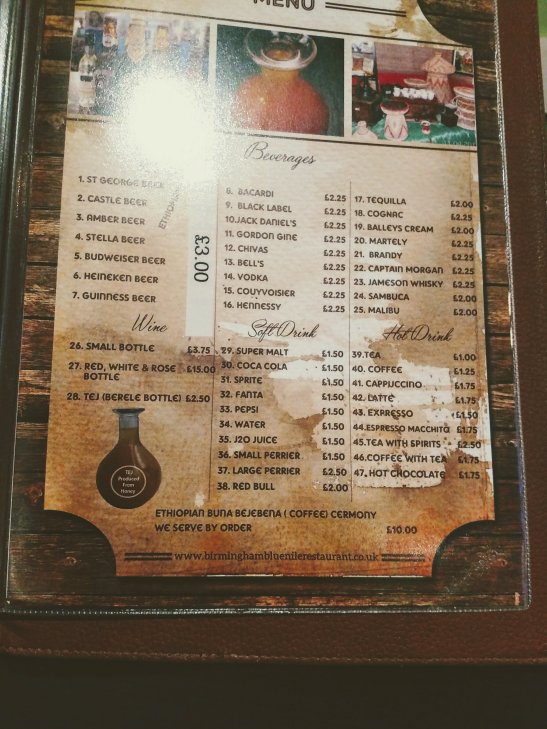 If I was pairing this food with wine, I would go for a Loire or South Africa chenin blanc or a gruner veltliner from Austria (on the white front) or a Spanish garnacha (if going down the red route). I think Sherry would also work well with this sort of food – a Palo Cortado would be my choice.

We passed on the rather intriguing coffee ceremony (as we had a train to catch), which was shame.

First venture into the cuisine of Ethiopia and Eritria and I hope not the last.

Tasty food in a nice sharing format (great food for a large group as long as you all know each other well) made for a pleasant evening. For J and I it caused many a giggle. Food and drink should be fun (not stuck up) and we laughed a lot.

Fab for both carnivores and veggies and well worth getting out to the Jewellery Quarter in Birmingham.

I was more keen on the food than the booze, with the Tej not for me.

Would I go back? Yes, really enjoyed it and rather wish Cardiff had a Ethiopian place to eat in. I am certainly not aware of there being one, but would be very pleased to be proved wrong. Will probably give the Tej a miss next time though.