Belgium is famous for a number of things eating wise (think waffles and french fries to name but two on the food front). When it comes to booze, it is famed for its beers which can be a perfect foil for Belgium foods. Many such foods involve a hearty slug of said beer (think Carbonnades Flamandes), but to me the quintessential Belgium dish is moules-frites (which can have beer or indeed cider added as the base to the sauce, but the classic rendition of it uses a crisp dry white wine like muscadet).

Unofficially Belgium’s National dish, moules-frite, when done properly it is a delight. Plump, meaty, bivalves in a lovely buttery, garlic, shallot and white wine broth into which the briny mussel liquor is naturally added during the swift cooking process. Easy to eat as you have nature’s tongs and spoons in the form of the shells, with the added benefit of a steam facial as the lid is lifted and you peer into the pot.

This brings me to the Hashery, a recently opened restaurant on the High Street in Cardiff City centre, whose menu covers mussel pots, burgers, cubanos (the plural re the latter being a moot point – more on that later) and salads.

To be honest a nuclear waste dump would have been welcome on the site in question as opposed to what was there before, in the form of Bella Italia (a faux Italian of the worst kind), so the quite inviting façade and offer of mussels/moules at the Hashery was on the face of it very appealing.

Inside it is a fair bit bigger than the exterior would perhaps suggest. The décor is pleasant enough, although I note they have gone with the current fad for spider lights with low-wattage bulbs. The dispersed spread of the already dim bulbs means the measly light they give off is further diffused. Result – minimal illumination and a need for more lights. Very much a case of style over substance these sort of lights.

Notwithstanding my misgivings at the spider lights, the place is comfortable enough and we were shown to a table and given menus promptly. A jug of water, with ice and limes wedges, was provided without us having to ask. I like that.

From the menu offering of mussel pots, burgers, cubanos/sandwiches and salads, as well as a selection of sides and nibbles, I was keen to try the mussels. I like my mussels simple (butter, white wine, garlic, shallots and parsley) and find the addition of cream usually a tad rich.

Nothing ventured nothing gained, I asked if they could hold the cream in the Hashery mussels (£7.95). This request was met with a gratifying “no problem”.

What arrived was a decent sized pot of mussels sitting in a lovely winey briny broth, with a reasonable amount of french bread (for dunking in the liquor) on the side. The mussels had been properly cleaned, with no presence of grit, beard etc. (which can ruin this dish).

A classic well done, although not perfect as there were a few broken shells in the pot. This raised the problem of whether these were open or closed after cooking (with the latter to be discarded). I erred on the side of caution with these broken ones, which meant a little bit of wastage. Also some (not all by any means) of the mussels were a bit on the dinky side – more the ” mussels” of Olive Oyl than Popeye. Did I get ones from the bottom of the sack I wonder?

The classic combo with moules is of course frites, which of course I ordered (I personally think it is a shame they don’t come as part of a single priced moules-frites package).

What arrived (£2.95) were nicely crisp on the outside and fluffy on the inside, but more chunky than what I regard as traditional French fries/frites. They came with a very nice pot of homemade mayo (by far and away the best condiment for fries in my humble opinion). 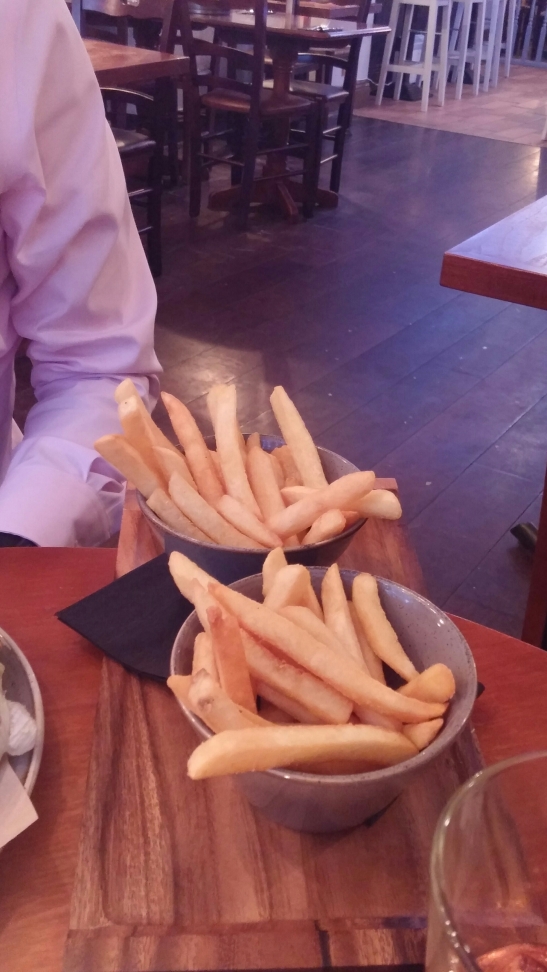 One of the chaps who came with me had a burger, in the form of the Big Chix (£8.95 sans fries). This was a chicken breast, marinated in butter milk and basil and topped with mozzarella and mushroom. His view was that this was perfectly pleasant, but a bit pricey at £8.95. Whilst I didn’t try it, it looked (compared to the similarly priced chicken burger, the Prairie Girl, on offer at Kongs) perhaps a little pedestrian. I did like the pickle and coleslaw on the side though. 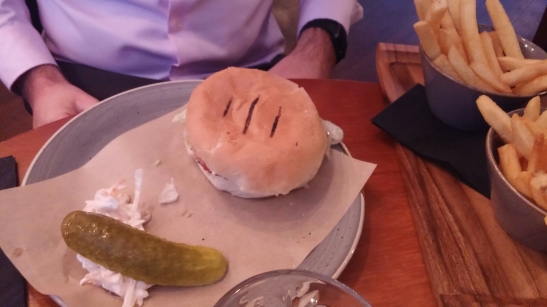 This I thought a bit odd if I am honest. To me a cubano is one thing and one thing only. That thing is a sandwich made with ham, marinated roast pork, swiss cheese, pickles and mustard (and possibly salami) served on cuban bread (or as close as you can get to it in the UK) which is heated and compressed in a press (without the grooves). That is it – nothing else is a cubano.

So whilst the menu items under the heading “Cubanos” included a traditional cubano (personally think the use of mojo sauce – other than as a marinade for the pork – here should be replaced with mustard though), it also included sandwiches called mexicano, chick flick and cubano veggie. These sandwiches aren’t a variation on a cubano theme, they simply ain’t cubanos to my mind.

The mexicano was a untoasted sandwich pure and simple.

The chap who ordered it said it was a nice sandwich (some may argue a bit pricey at £7.50 – it was a big mind with generously proportioned fillings), but only a sandwich and it certainly was not what I regard as a cubano. 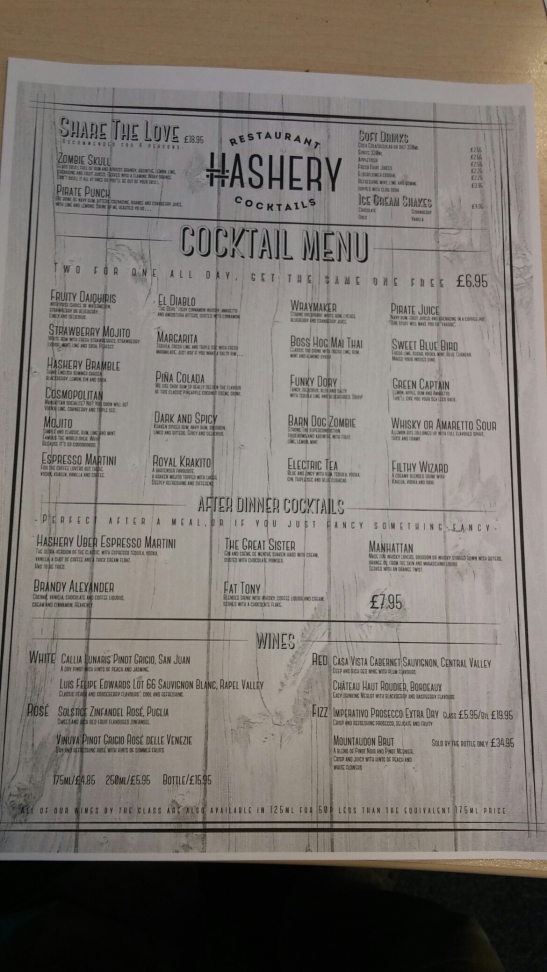 The drinks menu focuses on cocktails, with a 2 for 1 offer in place all day and everyday. I am not much of a cocktail drinker, but the selection looked nice enough and, especially with the 2 for 1 offer, is very nicely priced.

In terms of other booze, they have a very short and not particularly exciting selection of wines (served in 175 ml, 250 ml glass sizes and by the bottle). With moules as the centre piece of the menu, it seems to me a shame that the list is lacking in lovely crisp, dry whites like muscadet, vinho verde, albarino or picpoul de pinet. With the spicier Thai mussel pot, what about a riesling or gruner veltliner?

Whilst the wine pricing actually looks quite reasonable, it does somewhat discriminate against the light drinker with a 175 ml glass £4.85, a 250ml glass £5.95 and a bottle £15.95 (for non fizz). By my (highly suspect) maths that makes a 175 ml glass disproportionately pricey.

Bearing in mind the Belgium connection, in the form of the moules, I was surprised there were no beers (Belgium ones in particular) on the drinks menu.

It was a working day so no booze for us and the soft drinks offering was a OK, if a bit limited (juices, sodas, milk shakes and a couple of other options) and quite pricey (£2.55 for a 33cl soda).

I had a virgin mojito (£4.95) – the single mocktail on offer . This was very nice with a good mix of sweet and sour and plenty of mint, but the pricing seemed a bit off to me. Two booze laden mojitos (based on the, all day and every day, 2 for 1 offer) would be £6.95 whereas two (much cheaper to make) virgin mojitos would be £9.90. That seems very odd to me and a strong discouragement in terms of non booze drinkers/designated drivers. I, personally, think the 2 for 1 offer should apply equally to their mocktails and that there should be more than one on offer.

I always enjoy a good bowl of moules and what I got at the Hashery made for a very pleasant lunch. The burger and sarnie were viewed as very nice by my fellow diners,but perhaps a tad on the pricey side (for lunch).

We paid a smidgen over £40 for 3 people, with soft drinks (without a tip, which we gave as service was good). Whilst not bad at all for dinner, it doesn’t really make for a regular lunch time haunt.

Personally I think if they want to attract more of the lunch time crowd they may need to offer some deals (i.e. get on board with Wriggle).

In terms of drinks, I think it a tad unfair to non drinkers/designated driver as (unlike on the cocktails) soft drinks seem to me to be quite pricey. The wine list also doesn’t look like it was put together with much thought for the food on offer. To me it is currently a “by the numbers” (sauv. blanc ✅, pinot grigio ✅, cab. sauv. ✅, merlot ✅) list rather than one which actually aligns with the food on offer. With moules on the menu where, for instance, is the muscadet?

Would I go back? Yes, for the mussels (which, as well as being tasty, are a very sustainable food source, so virtuous too – with their beards does this make moules the ultimate hipster food I wonder), but probably in the evening rather than at lunch time (unless they put in place a lunch time offer – which I think they would be wise to do to cater for tightwads like me).