Much to my anguish, Sherry Week (a celebration of that wondrous drink from the Sherry Triangle in Andalucía) fell within the Welsh Firebreak. As a result the usual frivolities to be had at Asador 44, Bar 44, Curado and (more recently) Vermut (in Cardiff’s very own barrió) were denied to me (and everyone else).

Being nigh on locked up (welding gear out for the inevitable next one no doubt) in my house (dog walks and food shopping aside) was, however, no barrier to me enjoying a few sherries (clearly an essential item!?) during #sherryweek 2020 (2 – 8 November).

I, therefore, set myself the hugely arduous task (someone has to take a hit for the team and there was bugger all else to do that week) of tasting
a different sherry each day during that week.

This is partly due to the en rama (minimal filtration) nature of this wine, but also the time the wine spends in the solera system (much longer than your standard manzanilla).

On the nose it is gives off quite distinct coastal notes (think saline and iodine), as well as sharp green apple.

On the palate, you still get the salinity as well as herbal notes (touch of bitterness) and a nutty finish.

Very gluggable stuff and lovely with some Curado bought olives stuffed with anchovies. 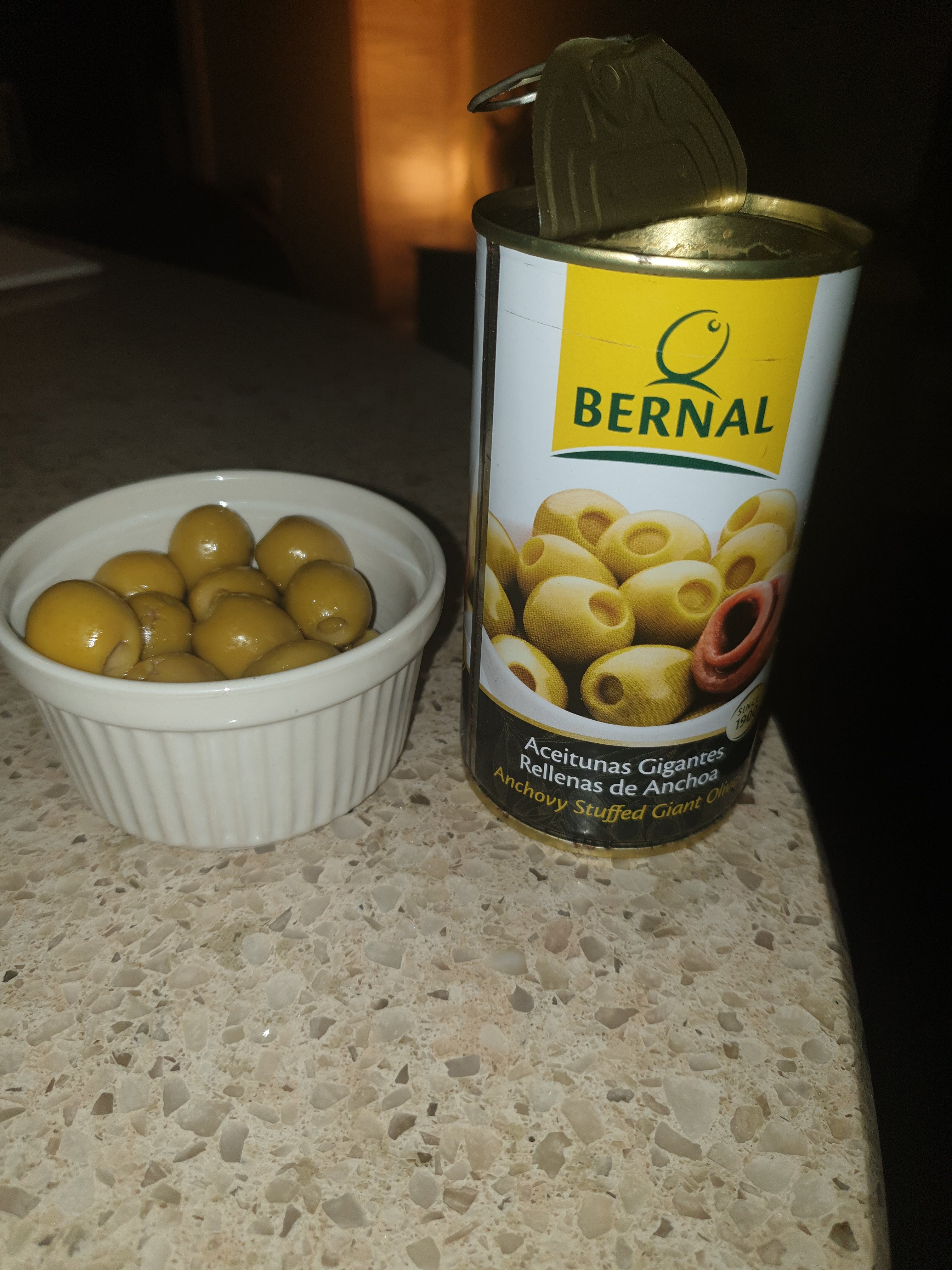 Oloroso is one of my favourite styles of sherry, with it being (to my mind) the great deceiver. On the nose it sends clear signals to your brain that it is going to be sweet, but then on the palate it can be as dry as a bone. That “does not compute” moment offers a lovely sensory pleasure.

Great with and in food, below is a typical dish involving oloroso in the form of an carrilleras estofadas de oloroso (pig cheeks, from  K. Blackmore & Sons in Cardiff Market, braised in oloroso).

I made this during Sherry Week and it entailed the addition of a substantial glug of an oloroso born of a recently defuncted partnership between Marks & Spencers and Bodegas Lustau (the ending of that partnership was sadly rather symptomatic of M&S’ death spiral in terms of their wine offering – use to be good, with lots of interesting and unusual stuff, now it is utterly formalatic dross for the most part).

I picked this up for a mere £4 when M&S were (very foolishly, in my view) destocking it.

Lovely in the food and with it, this had a nice rich mahogany colour to it.

On the nose it offered up lots of nutty aromas (toasted almonds and hazelnuts), with a back note of bitter (seville) orange and sweet muscavado sugar.

On the palate, it was quite fruity, with a dryness that belied the sweet nose. As it lingered on the palate nicely there were notes of vanilla and pipe tobacco.

Whilst I was for purely selfish reasons very happy to have picked this up for £4, I weep for the poor sods who toiled to make it (and probably put their heart and soul into it). All that effort for a tiny fraction of that £4 – that to me is almost criminal.

Might be a few still hanging around in M&S stores  – if you see any my advice is grab the lot (if it is on offer).

The next day, with the left over carrilleras, we went for another oloroso (from #Mercado44 this time).

A deeper colour than the M&S number,

it had a very nutty nose (more brazil than hazelnut) to it. This was followed by distinctly beefy notes – think beef tea – and caramel.

On the palate, it has a lovely spiciness to it with vanilla, ginger and allspice  as well as the slight bitterness of  seville oranges. 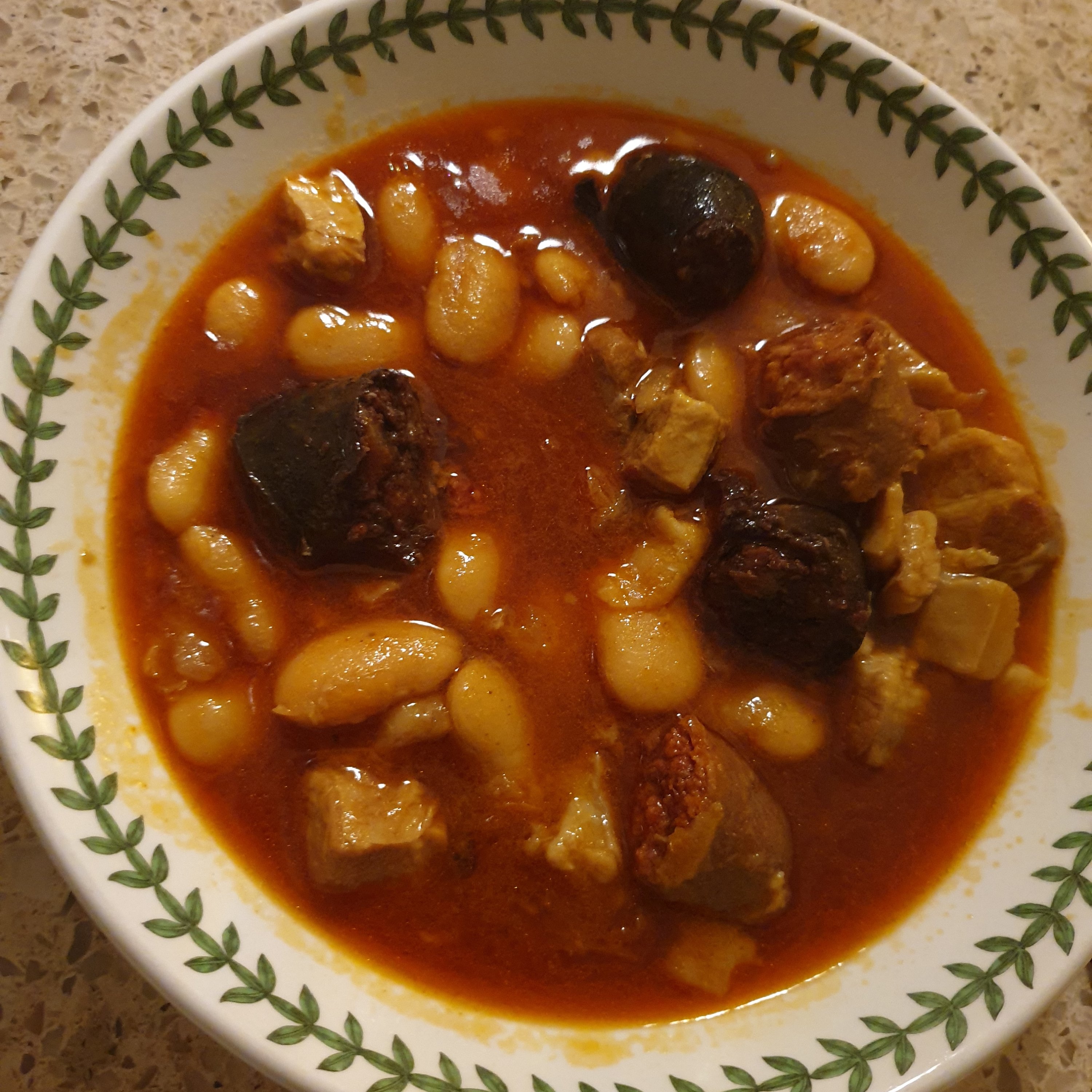 even though cidra is the perhaps the traditional pairing

No it is not the name of a bobby or a reference to me being politically correct (heaven forbid) for one day of the week, but rather a reference to palo cortado (that most mysterious of sherries).

In theory, a palo is born as a fino that inexplicably loses its protective flor and enters a second stage of ageing akin to that of an oloroso (with more time without the protection of the flor than an amontillado). It is suppose to follow the nose of an amontillado and the palate of an oloroso. In reality many palo cortados these days never see any flor.

This one is from the cellars of the bodega and almacenista Cayetano del Pino (bottled under contract by Romate Sanchez),

is the nuts (mainly hazelnuts) with a lovely whiff of caramel on the nose and a touch of nail polish.

More nuts and a fruity twang on the palate, yet bone dry. Lovely stuff bought from Curado Bar (about £15 if I recall correctly – unlikely, as it was a while ago).

This truly is amber nectar and  worked a treat with a pugent truffle Gloucester from Ty Caws.

Available in Majestic and Ultracomida/Curado Bar – between £18 and £20 marks for 75cl bottle.

With the working week duly in the can, I turned (following a #Mercado44 delivery) to sherry in a can!!

These cans of Croft Twist (from the mighty González Byass stable) contained a rather inviting rebujito style drink in the form of a fino, elderflower, lemon  and mint spitz. 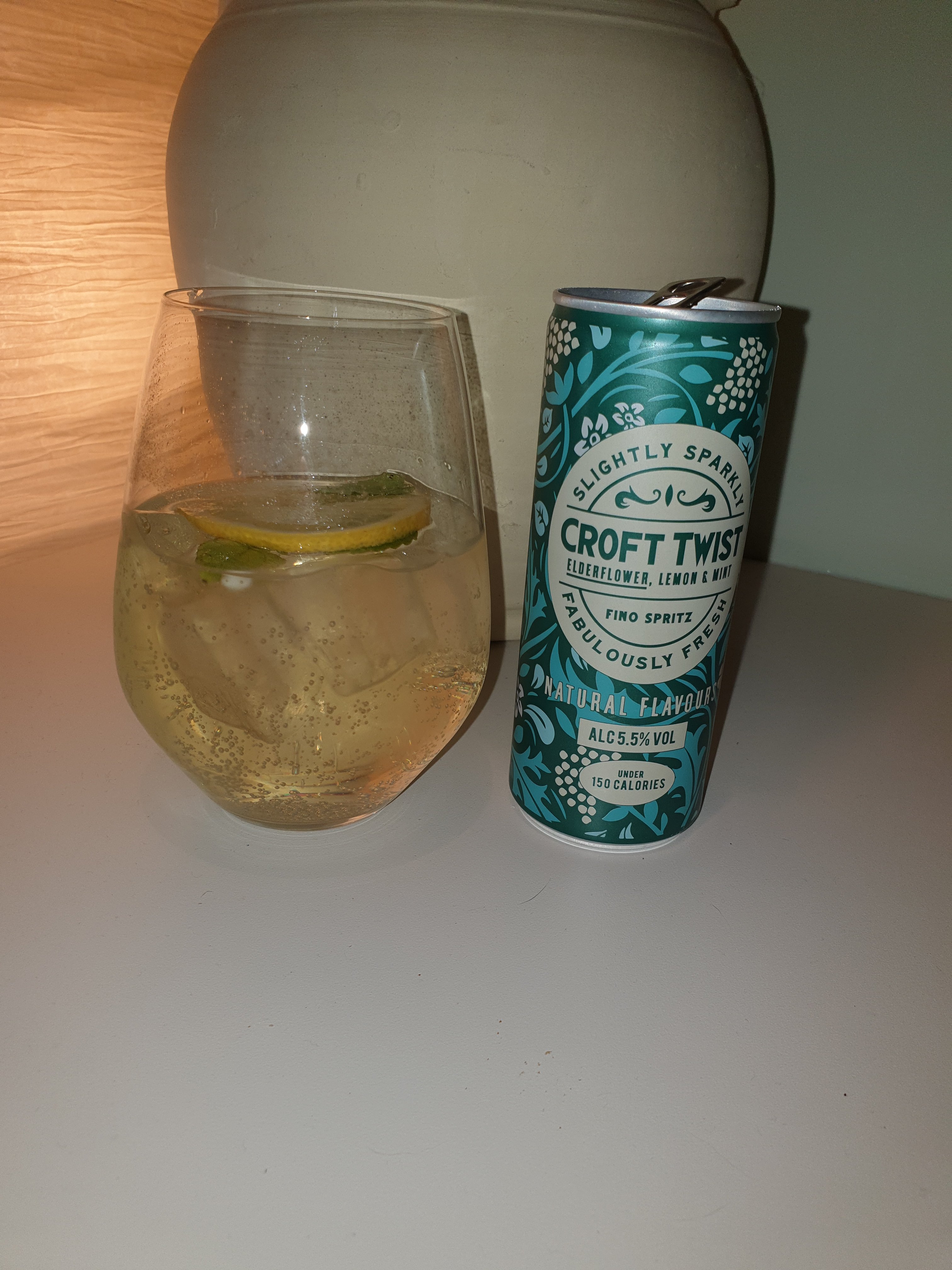 I added ice, a slice and a few leaves of fresh mint.

Marvellously refreshing, even in November, these will be the absolute business on a warm Summer’s day. After my somewhat disappointing foray into the world of canned wines, this is a can that definately can can and is nicely priced at £2.50 a 250ml pop.

At the same time I picked up this beauty from #Mercado44.

An absolute steal for a smidgen over £26 (25% off during Sherry Week).

I enjoyed my first taste of this Croft Twist so much, I had this lot delivered last week.

This stuff is great as an easy introduction to the delights that sherry has to offer, yet very pleasurably for an old sherry lag like me.

Wanting something with some blue cheese, I dug deep into the wine room and pulled out a Bodegas Lustau East India Solera sherry.

A blend of oloroso and pedro ximinez, this would now be regarded as a cream sherry.

Cream sherry gets a bad rap, with Nan’s favourite Harvey’s Bristol Cream, but actually it is a rather fine beverage that blends the sweetness of pedro ximenez with the spicey nutty notes of oloroso. 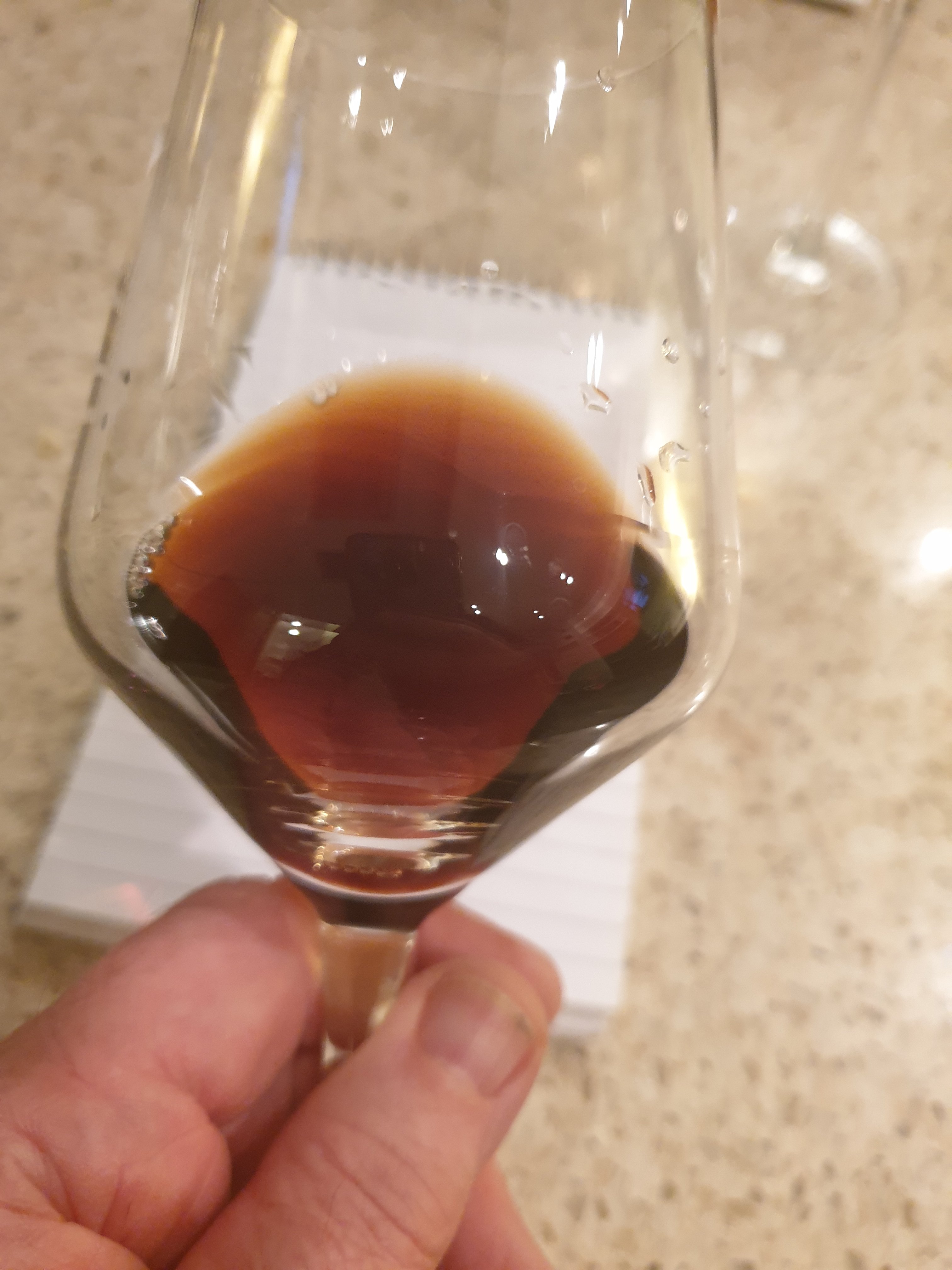 On the nose you initially get rich raisony and fig notes (the pedro ximinez in the blend coming through big time), followed by more oloroso characteristics (mocha, coffee and roasted nuts).

On the palate, there is no denying this is a sweetie although it is not as enamel stripping as a 100% PX can be. I got brown sugar, chocolate, espresso coffee and a touch of pipe tobacco.

Cracking paired with blue cheese, in this instance a Beauvale from Ty Caws,


it is also nice on its own with ice and a slice (orange rather than lemon).

Have had this bottle for a while so can’t recall where got it from, but it is relatively easy to get hold of. Waitrose for instance sell it at £11.99 for a 50cl  bottle.

Great value, this would make an excellent Christmas wine.

Sunday brought a traditional Sunday lunch (Valencian style) in the form of paella (chicken rather than seafood with the proper bomba rice sourced from Curado Bar ).

As with all foods there is a sherry that goes with that.

Based on the old food pairing  adage of:

it had to be an amontillado.

This number was born as a manzanilla, with the protection of the flor then removed allowing for an element of oxodised ageing. 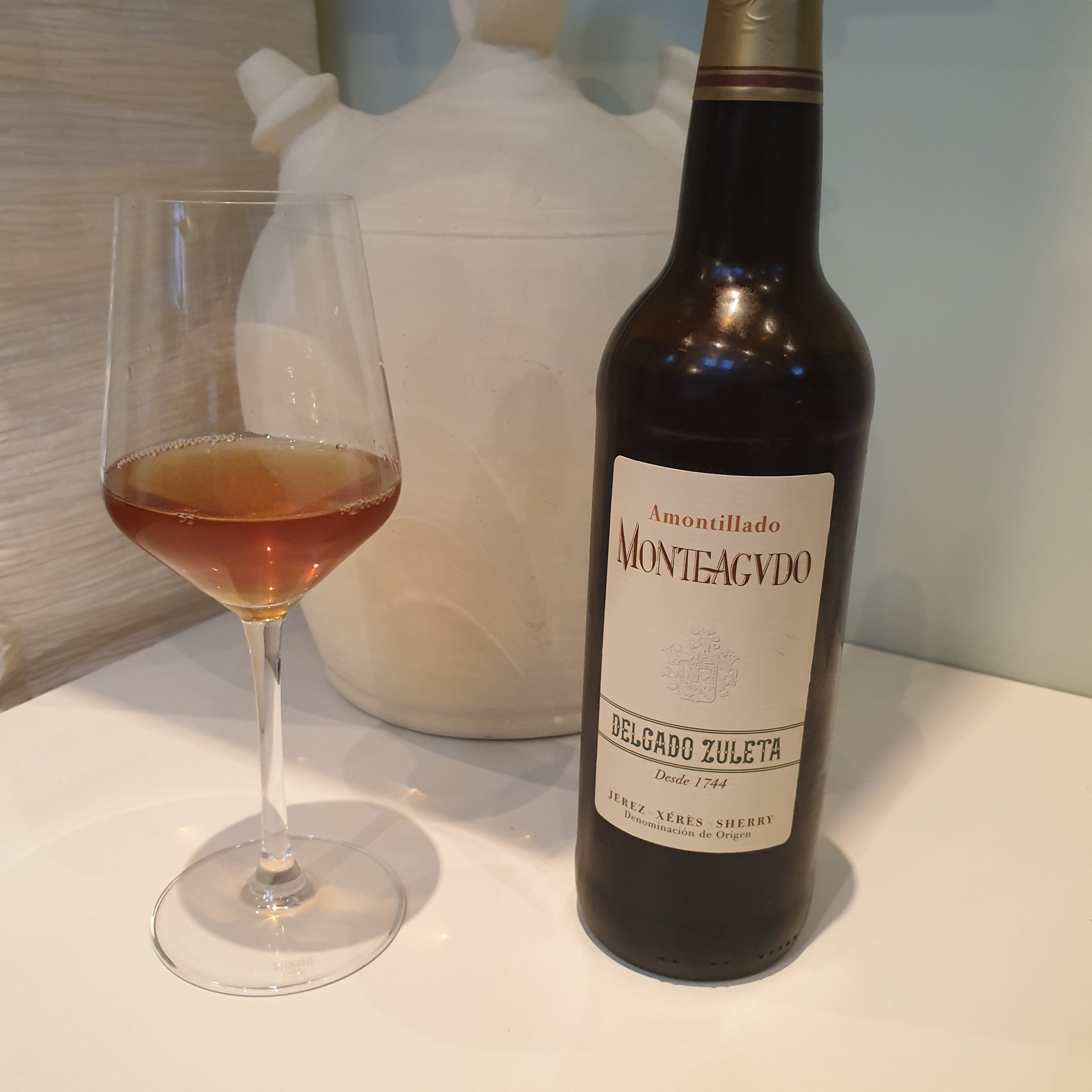 On the nose you can detects its manzanilla origins with almonds and a touch of salinity.

On the palate it was more nutty, with hazulnuts to the fore as well as an umami tang as it lingered.

It worked very well with the paella 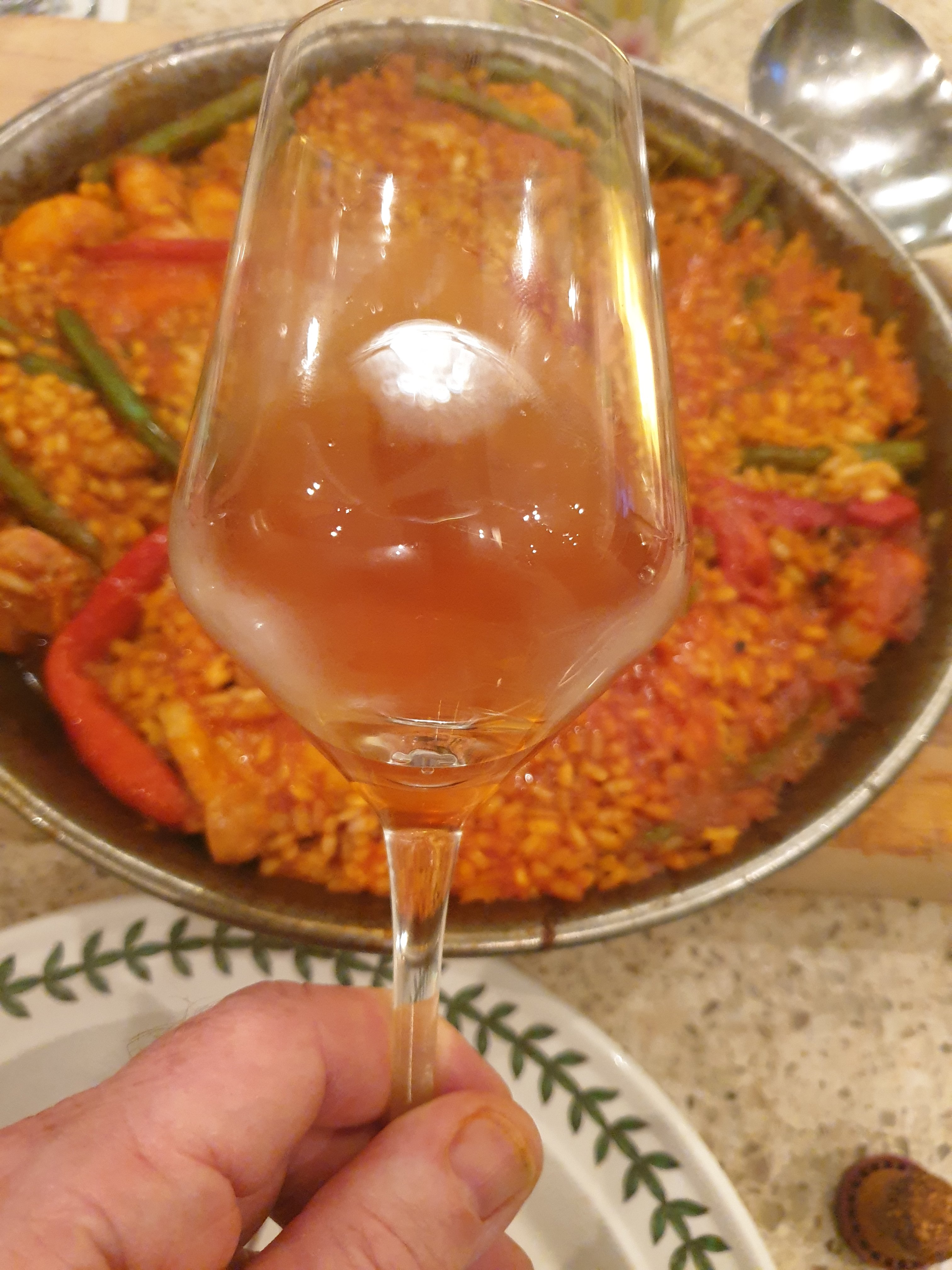 Sort of matched its colour too.

I got this from Curado Bar, with it reduced by 25% for sherry week from its normal £19.90 price tag.

Despite the lack of any physical events, I rather enjoyed my 7 days of sherry during tge 2020 sherry week.

It is such an underrated drink offering joyous drinking from bone dry finos to super sweet PXs. There really is a sherry for everyone.

It is also a fantastic food wine.
Where other wines fear to treat (asparagus and artichokes) sherry marches on with impunity, barely missing a step. Spicy food – no problem there is a sherry for that.

If you haven’t tried sherry yet why not give it a go. You are seriously spoilt for choice in Cardiff with Bar 44, Asador 44, Curado, Vermut and the Bottle Shops (in Roath, Penarth and shortly Pontcanna).

Why not try Bar 44’s new own label manzanilla made for them by Bodegas Baron and available on #mercado 44.

Beautifully packaging, but what’s important is what’s in the bottle.

Not tried it yet, but my order is in as it is sure to be a beaut. Owen Morgan AKA @sherrymonster and the Bar 44 gang sure know their sherries and I expect nothing less than excellence for a Bar 44 branded product.