Vegging out at the weekend – Mattancherry Canton Cardiff (takeaway) 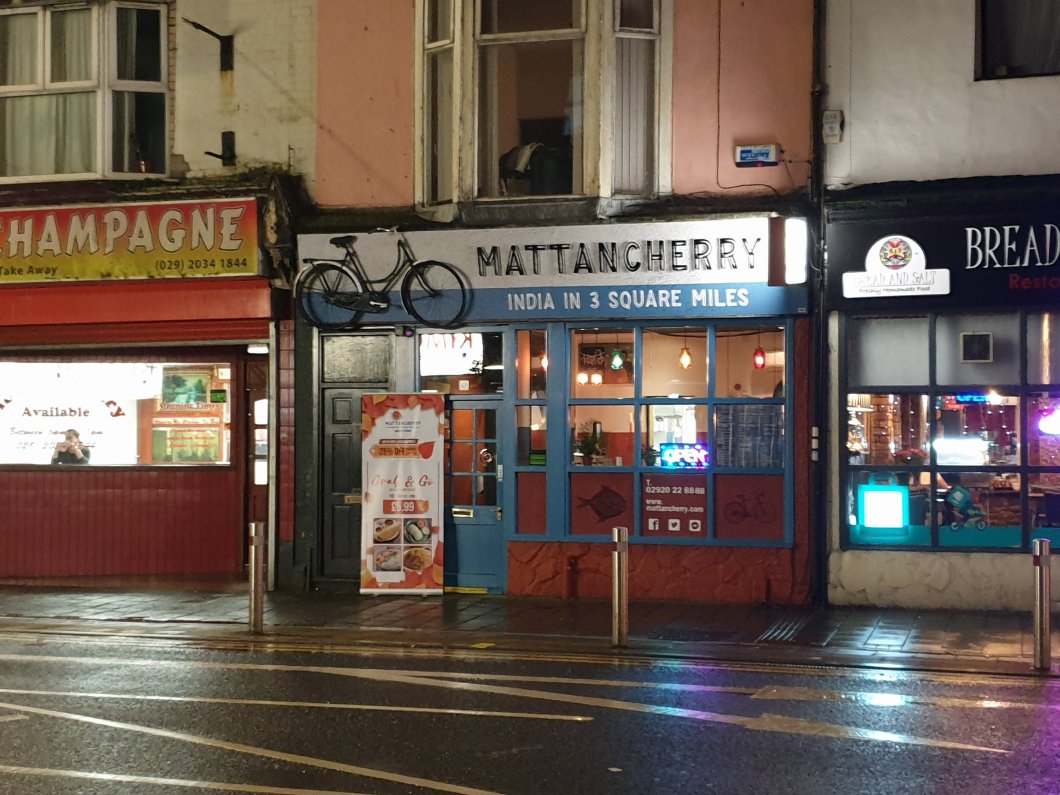 The term vegging out would usually be what I do in front of the telly after a long working week. In effect, relax in a slothful and mindless manner to enable my brain to disengage before I go to bed. All very rock and roll!!!

As regular readers of the blog will have noted it is pretty meat orientated, with veggie food a rarity.

Despite veganism and vegetarianism being very on trend I have been there and done it (for entirely unethical reasons) eons ago re the latter and I have no desire to return to it full time.

Veggie fare in the Darks Ages of my youth was pretty dire stuff, with a distinct lack of any imagination as to what was on offer. These days the veggie fare is much better with it being embraced by chefs as an integral part of their menus.

Despite rather dark memories of my days (fighting off rickets and general malnutrition – in my callow youth I wasn’t that keen on a lot of veggie so being one for a year or so was a struggle) as a veggie, I am not against vegetarian/vegan food (I just happen to like eating meat and am not keen on being “preached” to about eating it) and am happy every so often to opt for a vegetarian meal.

Whilst I have had many a good vegetarian meal from various world cuisines, the cuisine that really makes veggies sing (at least to me) is that of India and, in particular, Southern India.

This bring me to Mattancherry a “new” (I say new, but it seems to have a lot of similarities to its predecessor on the site in the form of Chai Street) eat in and takeaway place in Canton, Cardiff.

The idea of Mattancherry (the restaurant) is to try and replicate Mattancherry the district in a small “food” way.

If I am going to eat “veggie” food then a place like Mattancherry would be pretty high on the list of options and so it proved to be the case with me ordering a takeaway, but enshewing the meat thali options and going for the full on veggie (actually vegan) thali.

The eat in menu 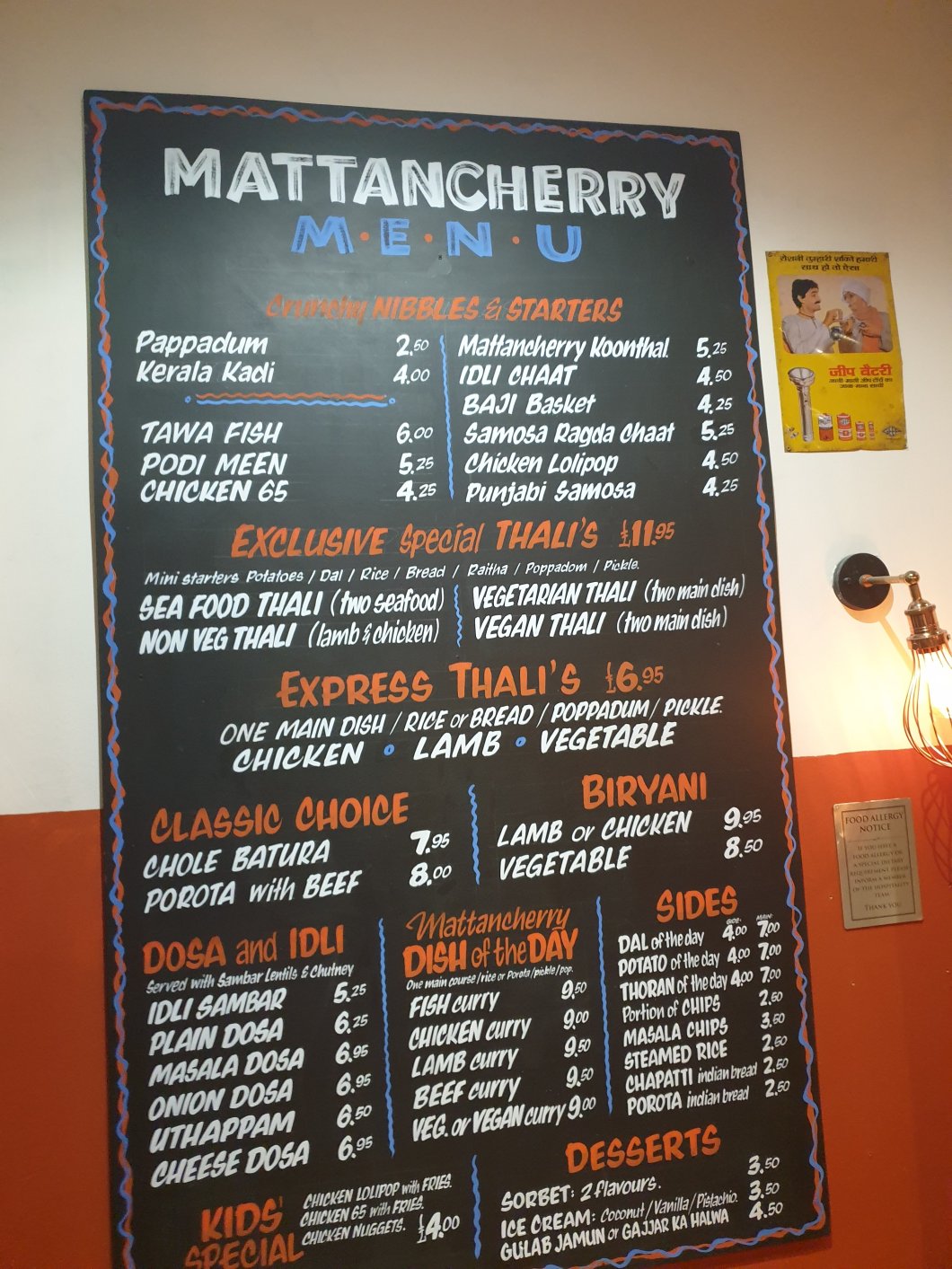 is fully replicated in the takeaway one, with me going for the latter.

I initially thought it odd that the thali takeaway price was two quid more expensive (at £13.95) than the eat in price, but the container it came in is probably the reason. Can’t imagine they are that cheap.

I ordered via their website (very easy, although being able to choose a pick up slot via the online process would be preferable) and went for a starter and a thali (the vegan one).

Looked a very decent sized portion and it had retained its heat pretty well after a 10 mins drive back in the car (they do deliveries as well as collections and you can, of course, eat in). 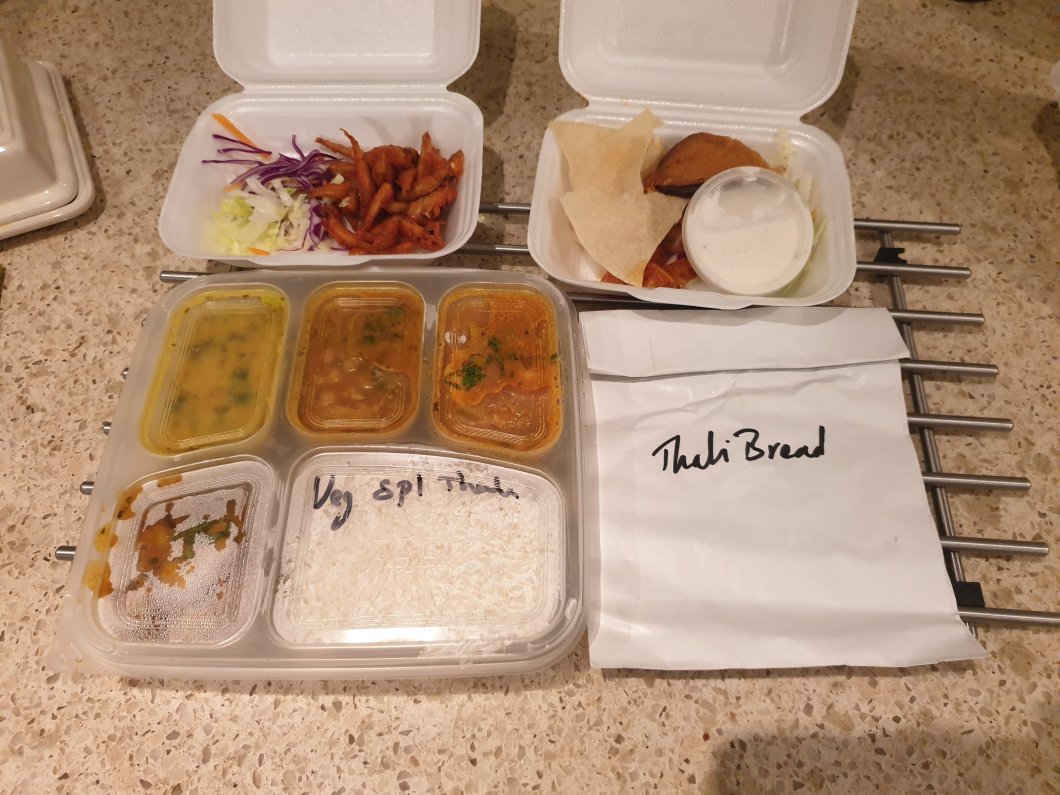 I did pop the thali in the microwave and the starter in the oven to warm them up a bit.

On the starter front, I went for the Podi Meen (£5.25 eat in and takeaway) which was slated as fried anchovies. 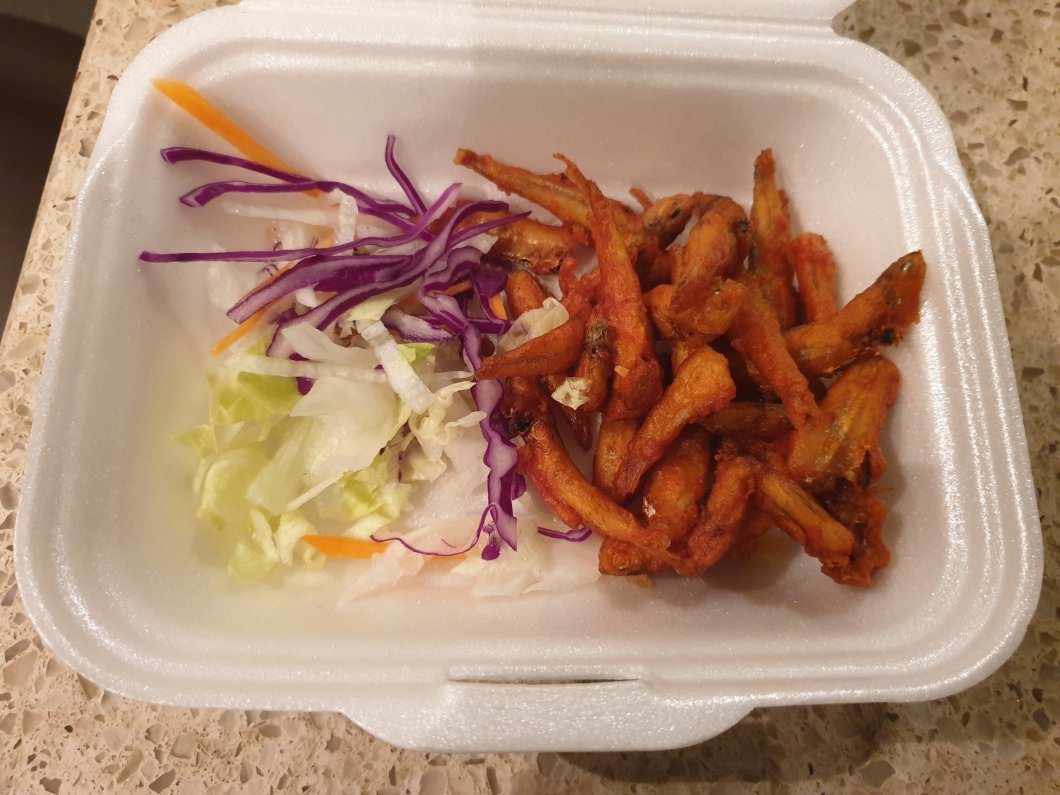 I could be wrong, but I thought there were whitebait (small sprats).

Whatever they were they were very pleasant having retained a nice crispness and coming with a good spicey coating. The garnish salad was perhaps a bit wanting and it could have done with a bit of zipping up with a chutney or something of that ilk, but all in all a good start.

Next up was a box containing some crispy coated aubergine slices, poppadum shards, lime pickle and more salad 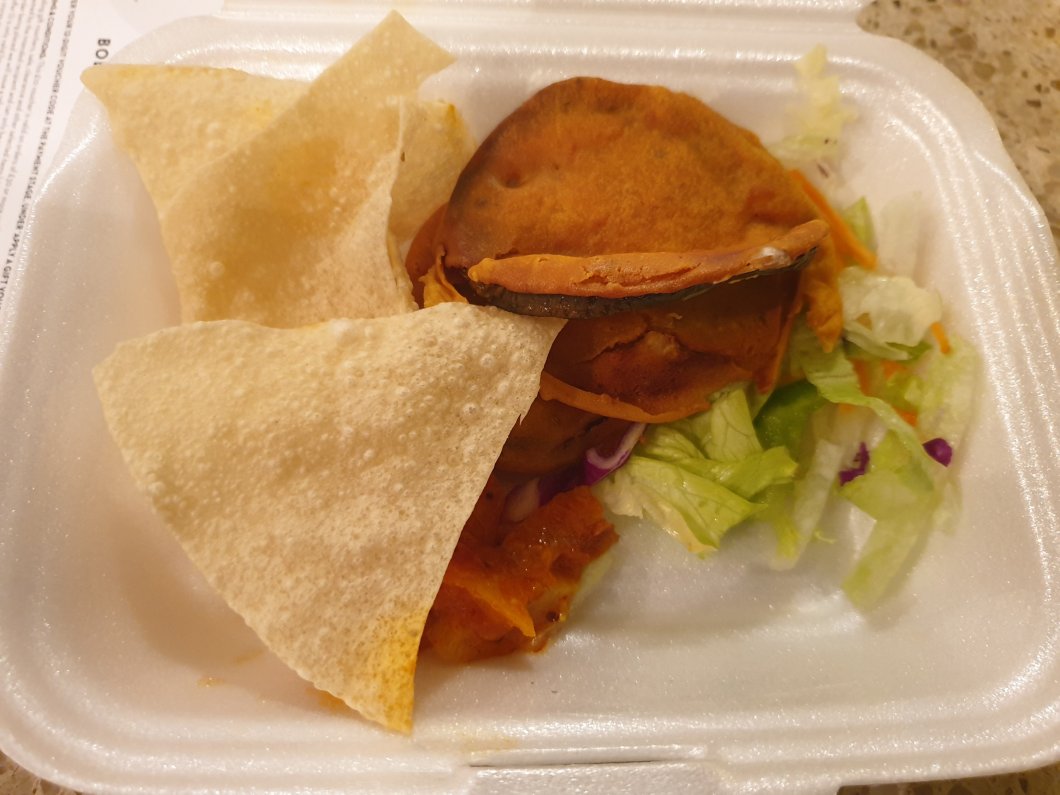 The aubergine fritters had retained a good crisp texture to the coating (nice spicing too) and a soft (non oily) interior. The poppadum shards had suffered a bit from being in the container, which meant they were soggy. Nice raita and a punchy lime pickle helped pep up the rather limp garnish salad.

Moving on to the main (thali) event, it came in a rather snazzy container that nicely partitioned off the various elements, 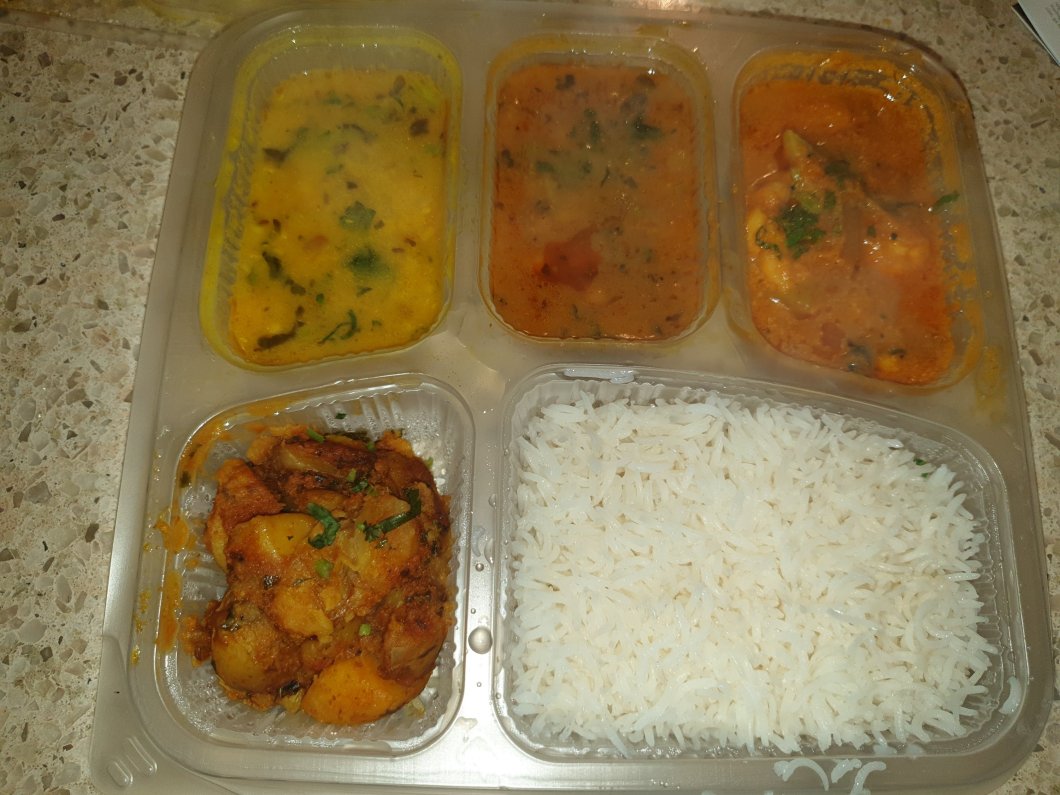 which consisted of two veggie curries, a dhal, a potato based side and rice.

A broccoli and cauliflower curry had a pleasing level of heat to it (felt it, but nothing too fiery), with the vegetables retaining a good crunch.

The kadala (chickpea) curry had a bigger hit of heat to it with a fiery whole chilli in the mix.

The chickpeas had a nice texture to them – not too mushy, but without too much of a bite. In effect, just right. The spicing was on the money with a pleasing hit of mustard seed and curry leaf (I think) on top of the chilli heat.

The sides included a sort of Bombay potato affair. 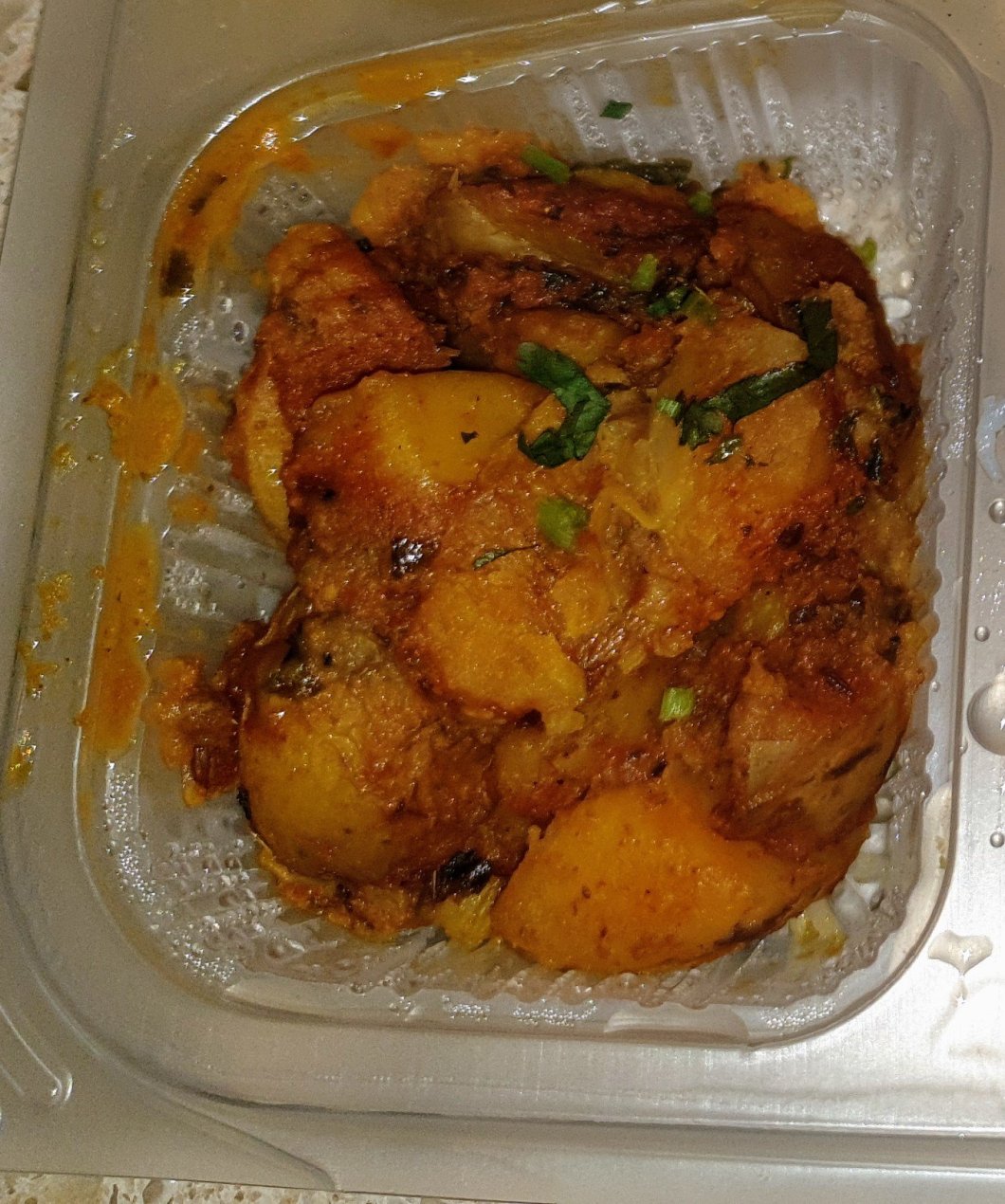 Skin on new potatoes smothered in a quite hot paste. Nice, although I thought the chilli dominated a bit too much.

The other side was a rather good dhal. I don’t like my dhals too mushy and it was nice to see proper definition to the lentil here. 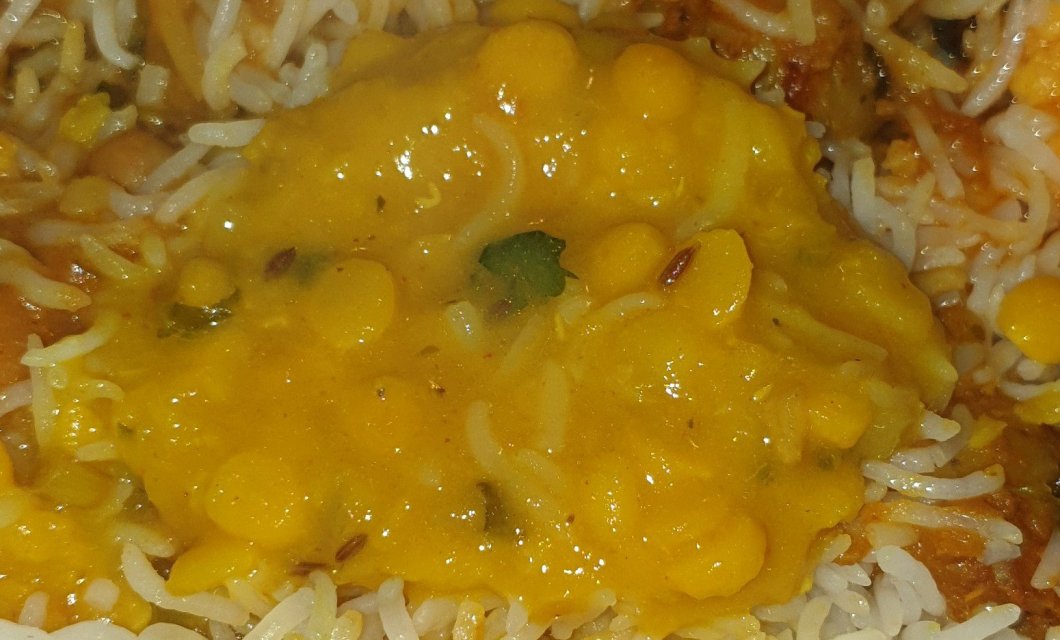 They had certainly dhaled it up a notch from you standard curry house dhal.

When put together on the plate it certainly wasn’t a looker, but as long as the flavours are there (and they were) I will always forgive aesthetics. 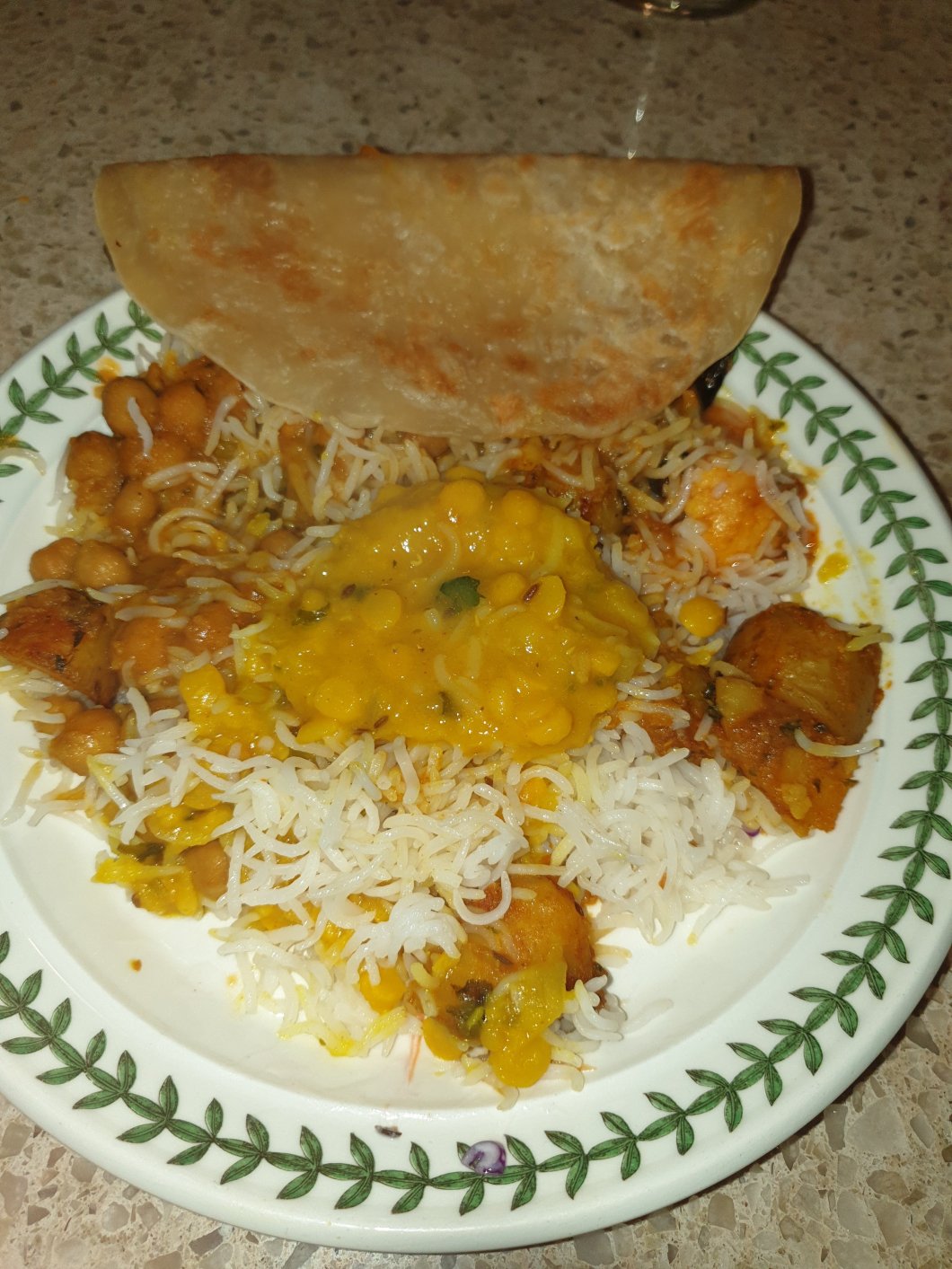 Along with the soggy poppadums, the only other slight issue was the porota.

This was sealed in a bag and when taken out wasn’t as flaky as I would have liked and a bit raw doughie/undercooked in the middle. This needed more cook time and me putting it in the oven in the bag it came in probably didn’t help. Small issues though, as against an overall very pleasurable dinner.

In terms of booze, sherry works a treat with spicy food and the remains of a bottle of palo cortado from Sherry Week (which I posted about last week) worked very well with all elements of the thali, as well as the whitebait. 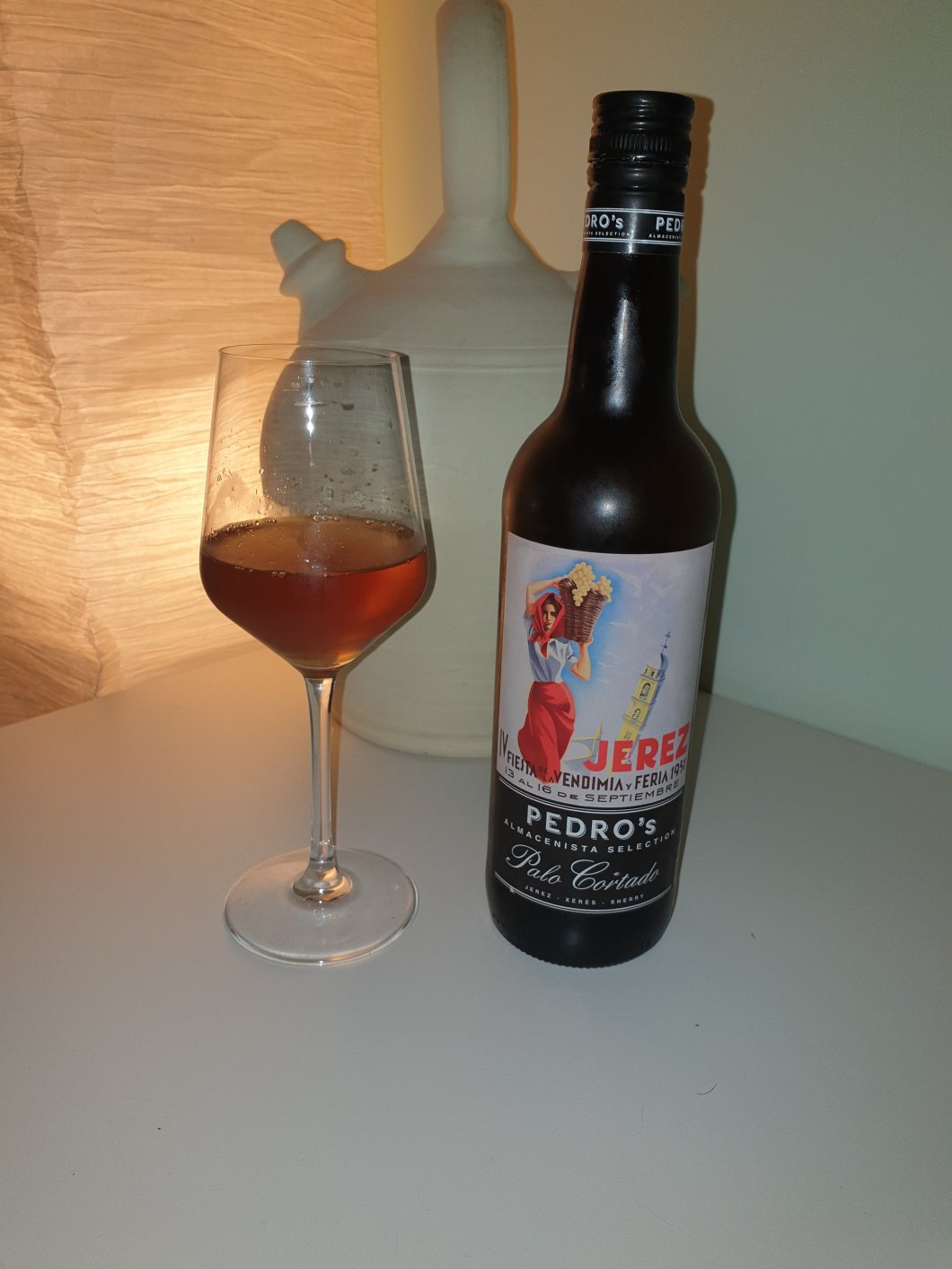 Once I had drunk the palo (the remaining glass in the bottle went down the hatch rather too easily), I still had a fair amount of the thali left.

Further refreshment was required and I though the time was right to crack open a carrot (keeping with the veggie theme) gose from brewing wunderkinds Yonder Brewing & Blending (one of my favourite brewers along with Vault City Brewing at the moment). 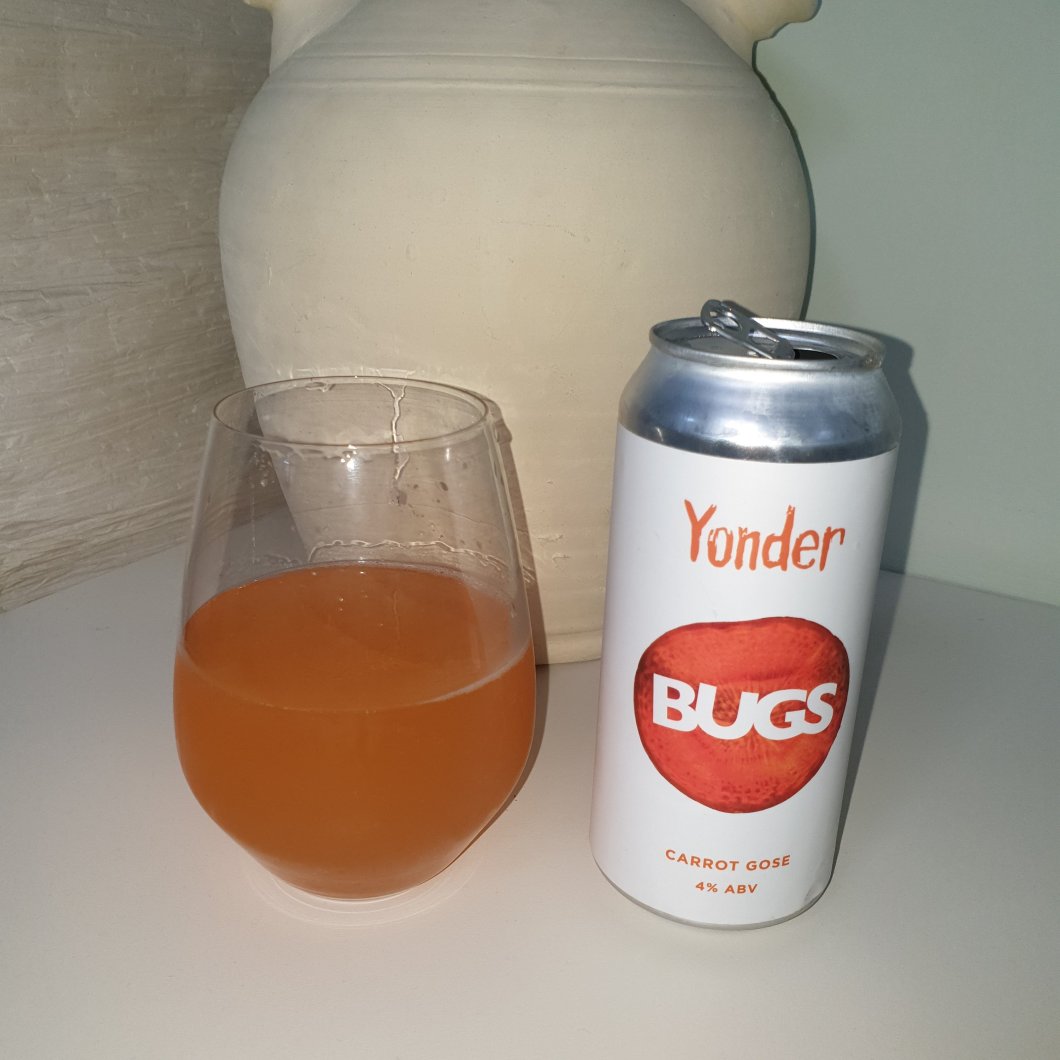 Nice (not too searing) sourness to this, with a salty tang, which I thought worked rather well with the various curries.

If I was going for a wine, I would probably go for a riesling. 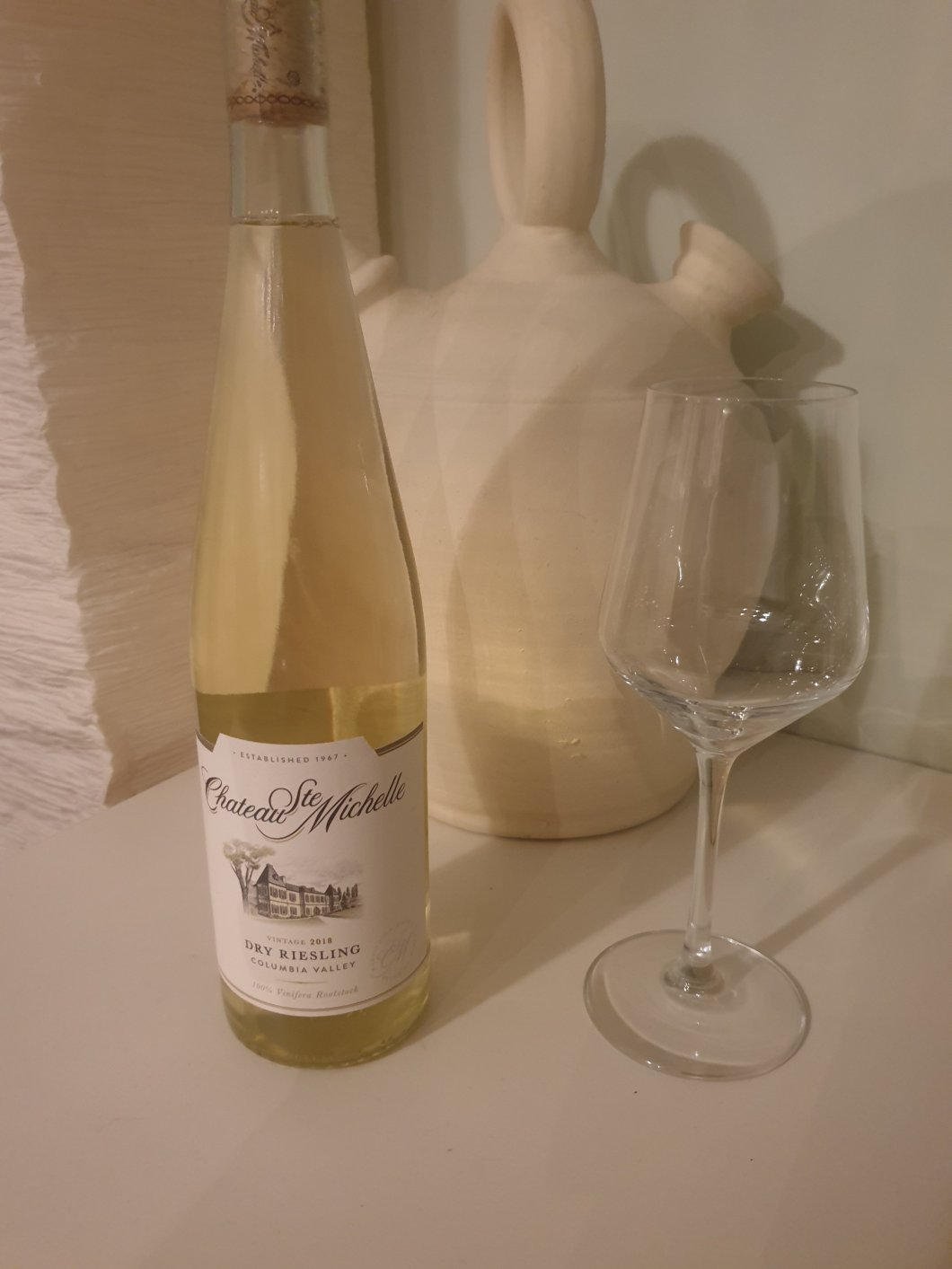 This one from Washington State in the USA would work well I think, as would an off dry German number.

I rather enjoyed my takeaway from Mattancherry and I really didn’t have an issue with the absence of meat. Nice flavour and value for money is an combo I very much like and this is what Mattancherry delivered in spades.

Would I order again? Definately and I would happily forgo the meat options again, although I am curious as to the the lamb and chicken and the seafood thalis. I would go for both another takeaway (always good to have more options when the seemingly inevitable further lockdowns kick in) and the eat in option (whilst we still can).