I have blogged about the Friday night “fixed price” menu offering from Paysan Food at Bloc Coffee in Victoria Park (Cardiff’s place to be with John Cook – Ember, Dirt, Hoof and the Lamb & Flag – and Phill Lewis – Hoof, Dusty Knuckle, the Warden House etc, etc, etc. – coming soon, as well as the people behind Raydr Tap with a much needed booze offering to enhance the already good food offering with Bwytiful and the Dough Thrower to name but a few) before and rather fine it was too.

They have, after the success of their Friday nights, expanded operations to cover a small plates offering on Saturdays from 4pm.

The blurb promised the likes of fried cheese (comté) and onglet (such an underrated, flavour packed, cut of beef), amongst many other potential delights and being an utter pig this more than piqued my interest.

As Victoria Park is a leisurely 15 min stroll from our gaff, Mrs. SF and I thought we would give it a go on their opening Saturday service.

Small plates tend to divide opinion. Some view them as an ideal way to graze, making it possible to try the full ambit of what a place has to offer. Others consider them no more than an excuse to charge premium prices for a mere morsels of (often mediocre) food.

I am generally in the former camp, but have experienced more than my fair share of the latter.

A good start here is the fact that they haven’t tried to use a bastardised version of the word “tapas” (which to me should only ever refer to Spanish food in the small plate format – can never understand the use of terms like “Thai tapas”).

There is no booking, so it is a case of turning up and grabbing a table. It was gratifyingly busy on their first day when we arrive at 17.30.

So on to the food.

On looking at the menu we ditched the original plan of nipping in for a quick bite and a small glass of vino. Instead we ended up, as near as damn it, ordering the whole menu (in two tranches). 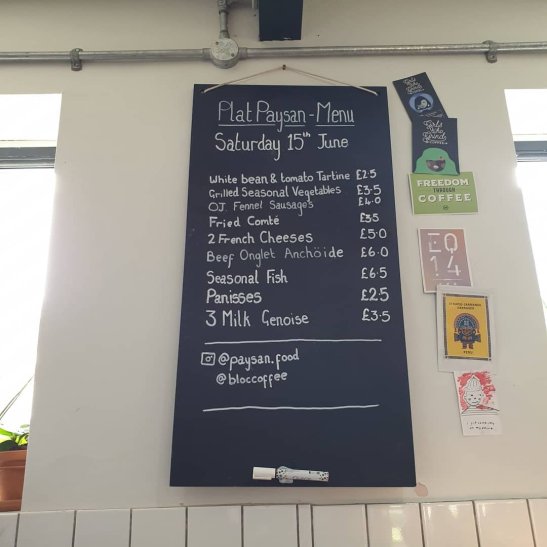 Great with a glass of wine on their own or as a sort of amusé bouché to preface the more substantial dishes on the menu. 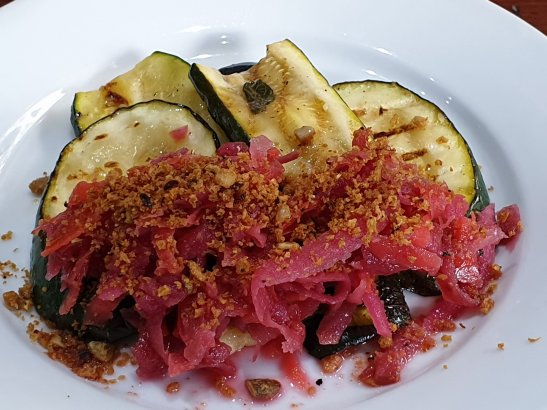 The courgettes had a nice firmness to them (they can get flaccid and unappealing if over cooked) and were infused with a rather pleasing lemon zest flavour. My brother in law has a visceral hatred of courgettes (which he regards as tasteless tubes of watery mush – I blame my sister’s cooking 😁), but I reckon these might just convert even him.

The fermented veg. was a mix of shredded carrot and beetroot, which brought a nice refreshing zinginess to the palate. A topping of crunchy fried breadcrumbs (cooked in garlic infused oil) added a pleasing textural contrast.

OJ fennel sausage (assuming the OJ refers to Oriel Jones, who supply the meat to this place) were (at £4) a very generous portion of quality bangers.

Fennel is such a good match for pork and here there was a nice harmony of flavours, with the fennel complimenting the pork rather than overpowering it 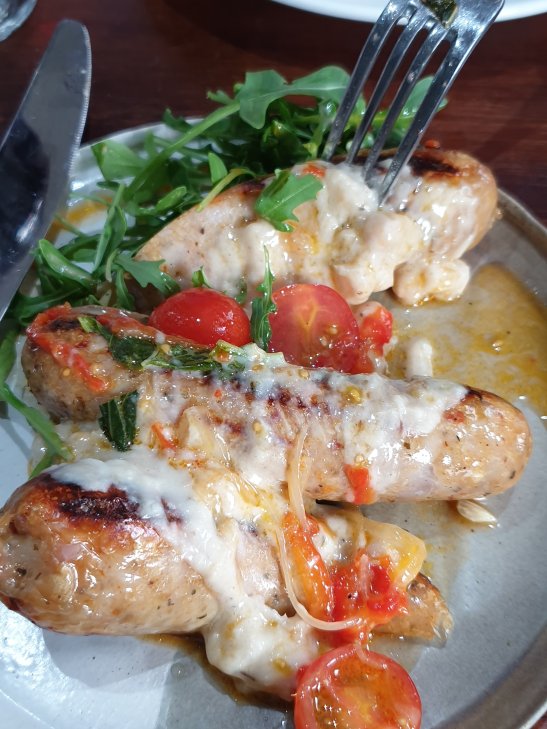 It came with really nice white bean (cannellini I think) sauce/puree, infused with onions, as well as a tomato and rocket (nicely dressed) salad.

The pacing of the meal was nice, with dishes coming out when we needed them (rather then on mass or with long waits). Amazing when you look at the size of the minuscule (couldn’t swing a gnat let alone a cat in it) kitchen and how busy it was.

Fish was next up, with a rather (as it happens deceptively) simple menu description of “seasonal fish”.

What arrived was a smorgasbord of fishy delights. 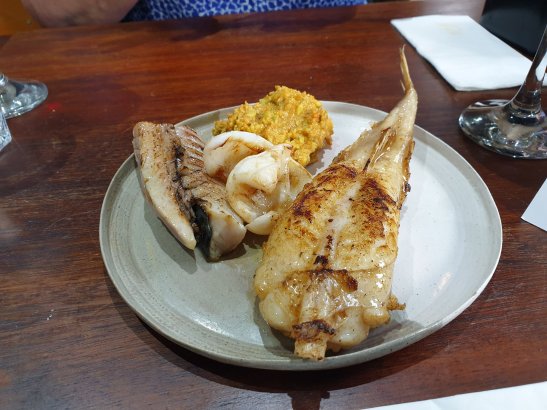 Beautifully tender cuttlefish (this stuff is most certainly not just for the birds), a bang on piece of ‘on the bone’ monkfish (with the bonus of there only being the central backbone) that needed just a bit of a tease to part the meaty flesh from the bone.

Mackerel (that so underrated of fish) was cooked so it retained a pinkish hue to its interior and had bags of flavour.

The final element was a generous dollop of crab (with copious amounts of the flavour packed brown meat in the mix) and avocado.

Not perhaps the prettiest, but who cares when it tastes this good.

An absolute bargain at £6.50 – I told them they weren’t charging enough for this or the next dish (sorry, but it is true).

Onglet/ hanger steak is a cut that is often ignored as against the more favoured cuts such a fillet (boring, if you ask me), sirloin, rump and ribeye. It is, however, a very tasty cut if (and it is a big if) it is cooked properly (rare). If onglet is over (medium to well or more) you may as well eat your shoe.

The onglet (a very generous portion for a bargainous £6) brought to the table was cooked absolutely bang on the money, with a gorgeous caramelized crust on the exterior

and a ruby red interior. 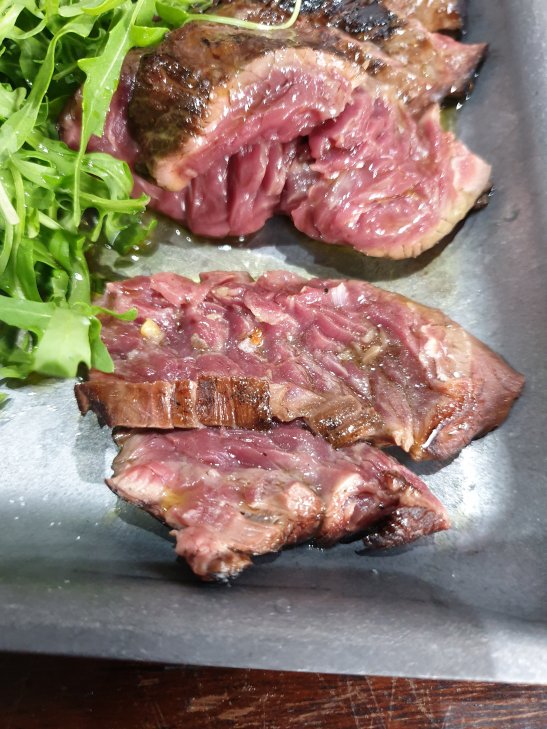 Perfectly seasoned, it exuded beefiness. The accompaniment of rocket had a rather fine anchiode dressing on it (and the beef), which worked really well and added a pleasing umami hit.

Great dish and so cheap for what it delivered.

That lot was our first tranche and we thought (based on how good it was) what the heck we may as well finish off the menu. A further order was thus put in.

Part deux started with a white bean and tomato tartine (in effect an open sandwich. 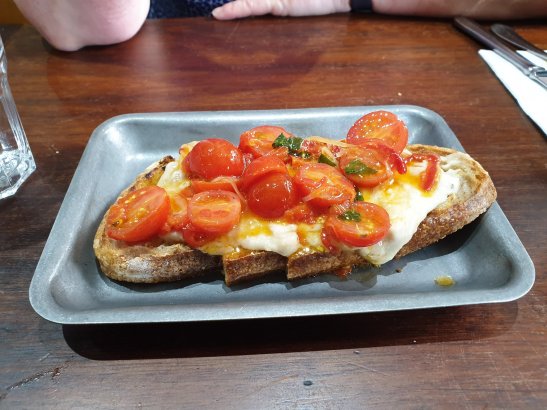 On a nicely toasted bit of bread (sourdough I think) sat a creamy white bean mix (not quite pureed as it retained some chunks of the beans) and some sweet baby tomatoes. All seasoned perfectly, it was a simple but flavoured packed dish and (at a mere £2.50) great value.

We ordered the panisses (£2.50) unclear as to exactly what they were. 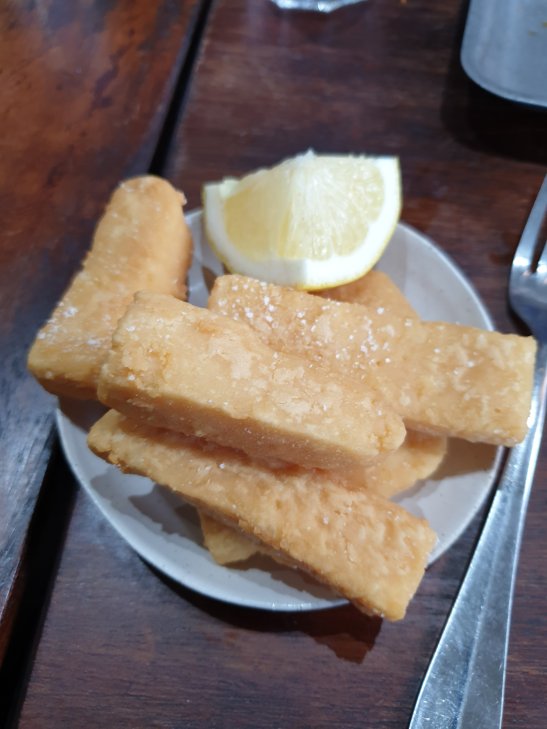 What we got can be described as chickpeas chips (chickpea flour, water and butter, lots of butter according to recipes I have seen) – sort of like polenta chips. Piping hot, with a generous sprinkling of salt, these were really lifted by the addition of a generous squeeze of lemon juice. Nice solo (especially as a snack to accompany a glass of wine), I think next time I would order them akin to chips (as a side to the fish, sausages or the onglet).

Proceeding were, in theory, brought to a close by a bit of cheese (as it happened we inadvertently followed the French tradition of the cheese being pre rather than post dessert). We (I say we, but it was in reality me) ordered 2 by mistake with the dish referring to 2 cheeses and my order being interpreted as 2 of the cheese (so 2×2).

Nice to see them not simply double up on the two cheese as we got all different ones. Can’t recall what they all were, bar from the Brie and Saint Agur – other gooey one was maybe a munster, I think, and the one in the middle a Crottin, perhaps?

After we had blitzed the menu on the savoury front, the chef (Grady Atkins) asked if we would like a complimentary dessert. Silly question that and of course we said yes – I mean “Is the Pope a catholic”!!

What I expected us to get was a little soupçon of something, but what arrived (to share) was a rather fine looking île flottantes.

The meringue had a fragile crisp exterior that cracked nicely with a tap of the spoon and a pleasing chewiness to the interior. Just how I like my meringue.

Atop the meringue was a very generous scattering of toasted hazelnuts and a rich, chewy, caramel. It all floated on a perfectly executed vanilla infused crème Anglais. A lovely end to super Saturday meal.

We decided on a couple of large glasses of the Castano monastrell (which we doubled up on) from Yecla in Spain. Nice easy drinking wine this, with plummy notes and spice on the nose and cherries on the palate. It was pretty good value at £19 a bottle (it retails a smidgen under £9). Based on my very rudimentary maths, the pricing for a 250ml glass (£6.30) seem a bit odd when a bottle (750ml) is £19. Means you pay less (albeit by a tiny amount) if you buy 3 (250 ml) glasses rather than a bottle. Can be right, surely!?

They also do cocktails (even the chippy seems to these days – an “Old Fashioned” with you saveloy and pickled egg, sir?) and, whilst I am not much of a cocktail drinker, Mrs. SF enjoyed her espresso martini (no idea how much it cost). 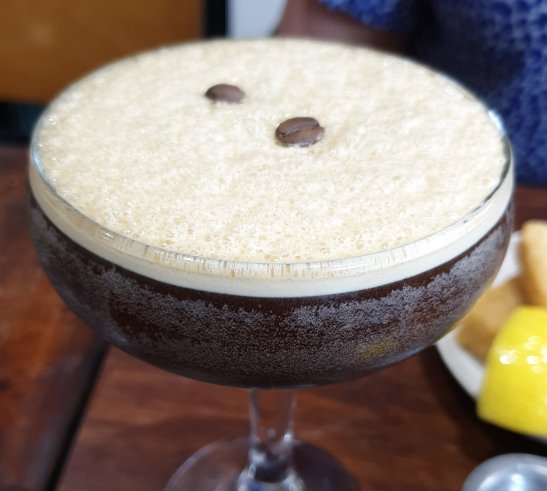 I think, with the diversity of the food on offer, that a slightly wider wine list would operate to compliment the small plates concept. A grüner veltliner would work a treat as an all rounder for the diversity of dishes here, as would an Alsace riesling.

I know I bang on about it, but again (my perennial favourite) sherry would operate as a perfect foil for this sort of food. A good manzanilla or a fino would have been awesome with the fish and more snacky elements, whereas an oloroso would have worked well with the meaty elements.

Would I go back? Absolutely – both Mrs. SF and I loved it.

It all makes this an excellent new addition to the Vic. Park (and wider Cardiff) dining scene.

Vic. Park is clearly on the up on the food and drink front.

Opening hours: Every Saturday from 4pm until 10pm or until they run out.