I sometimes think that on the High Streets of the UK (certainly in Cardiff) the cocktail bar has replaced the bookie or charity shop as the default new use for a empty unit. You are seemingly never more than 5 yards from a cocktail bar on Cardiff’s High Street/St. Mary’s Street.

How the High Street can cater for the sheer number of cocktail bars is beyond me, but like prosecco (it is a mystery to me as to why industrial prosecco is so popular – cheap shxte sells I suppose) cocktails (far from cheap by any stretch) seem to be very much in vogue at the moment (for how long who knows, as the younguns seem to be increasingly shunning booze). I am told it is all about the experience, with people prepared to pay top dollar for one or two swanky cocktails (and the theatre that comes with them) rather than for 5 pints of cider.

I am not a huge drinker of cocktails (me and dark spirits fell out many years ago and have never quite been able to patch things up), with my drinking habits (past my main tipple of wine) being pretty much limited to the odd beer and G&T/white port or sherry and tonic. On the cocktail front I may, on increasingly rare occasions, indulge in a caipirinha, bloody mary or a pisco sour, but I am singularly unambitious (boring) when it comes to cocktails.

My mantra of less is often more does not really compute to the world of cocktails and the myriad of ingredients (and now props) that seem to be part of the cocktail scene these days.

This brings me to, one of new wave of cocktail bars in Cardiff, the Alchemist.

Given the focus of the blog, perhaps, more on lunch than dinner and my lack of enthusiasm in terms of the merits of cocktails, a surprising choice for a lunch with the chaps from work you may think. As they have an all day menu, however, it was on the list to try out.

More buzzy by night than in the day I suspect, inside it is not quite as ostentatious as I was expecting. I actually (despite being an old fart) quite liked it.

The menu is a mix of breakfast/bunch (finishes at 12.00, we were informed by our server, although the menu doesn’t seem to give any indication that that is the case), all day grazing items/nibbles (think mac ‘n’ cheese bites, popcorn chicken and pork bon bon) 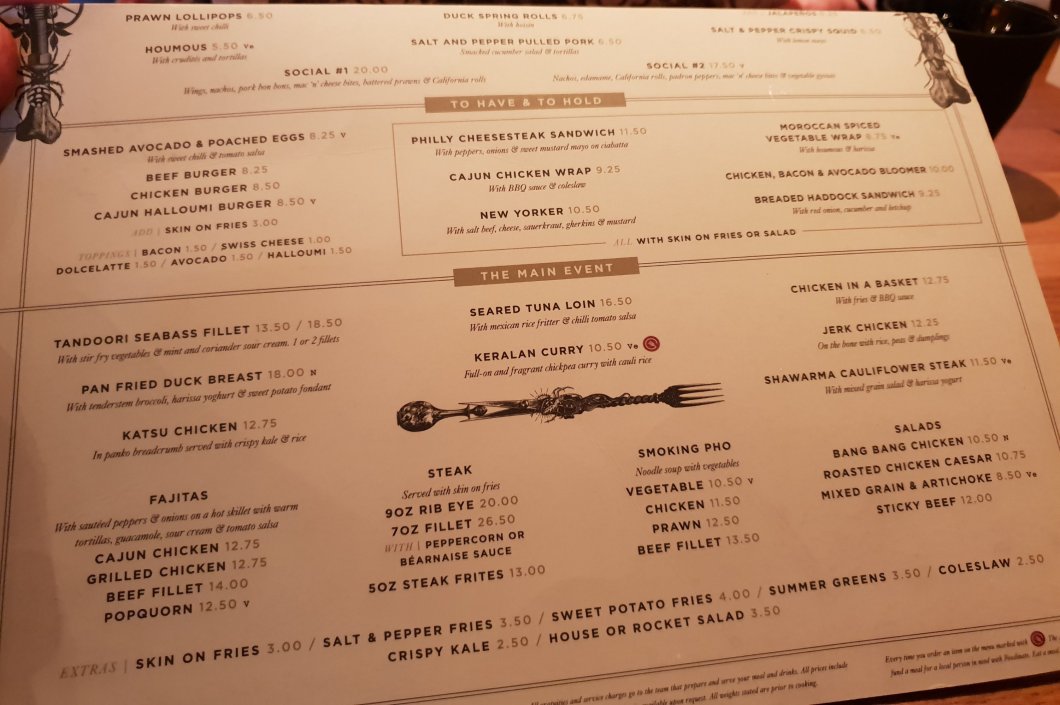 I, on seeing the menu, was instantly drawn to the ” Have and to hold” section (which seemed more suited to an ad hoc lunch than the more formal “Main Event” items) and, in particular, the Philly cheesesteak.

When done properly a Philly cheesesteak is a glorious mix of tender, thinly sliced, rib eye steak (I can live with skirt or top rump steak being used, but again they should be cut thin) and plenty of cheez whiz or melted provolone (with fried onions added to the mix) all in a sub roll for easy eating.

It requires no f’ffing about in terms of adding anything else (although I will concede I am not adverse to a sliver or two of bell pepper in the mix) and in all cases there needs to be a generousity in terms of the amount of the steak filling and cheese in the sub roll. Steaky, cheesy, gooeyness should be the aim, with the end result being cheese everywhere (it should be very much a non beard friendly sarnie).

In terms of alchemy, the pinnacle was supposedly the “Philosopher’s Stone” a mythical substance capable of turning base metals into gold. I had hoped that the Alchemist would achieve the feat of turning a base steak sarnie into “Philly cheesesteak” gold (admittedly more out of hope than expectation and with a view to a desperate attempt at jemmying into the post title a play on words linked to the philosopher’s stone – I admit my attempt is rather pitiful).

I have not had a really good Philly cheesesteak in the UK to date. Renditions of it here I have had sliced/cut the steak too thick, used the wrong cheese and/or didn’t use enough of it and tended to add way to much in terms of extras (instead of concentrating on loading up on the steak and cheese). In short, the Philly cheesesteak “keep it simple and sloppy” mantra is rarely, if ever, applied.

In terms of the Alchemist’s version (a pricey £11.50, with fries or salad), it regrettably didn’t make the grade (remaining very much a base steak, with cheese and onions, sarnie rather than hitting Philly cheesesteak gold). 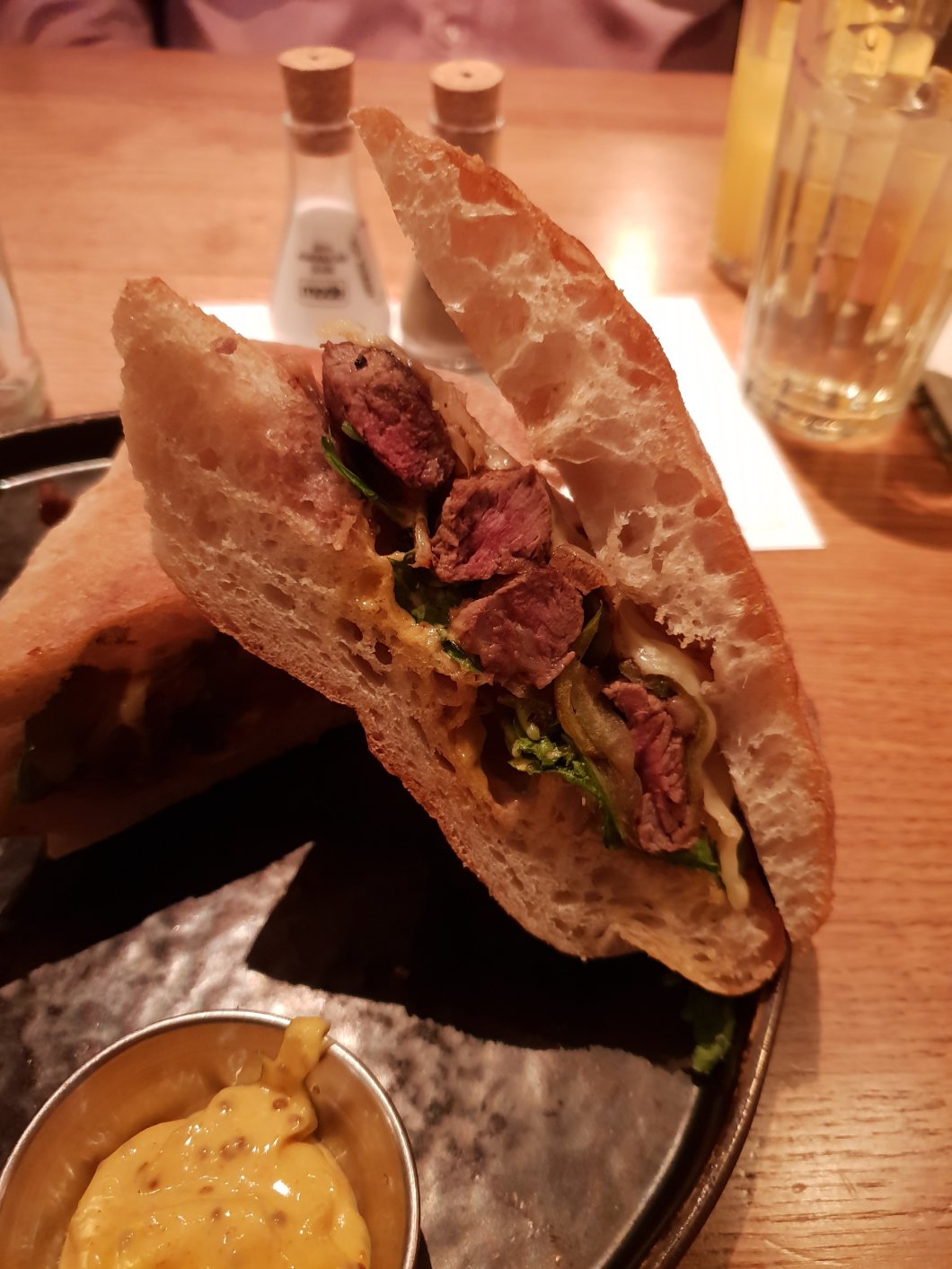 The steak was in chunks rather than thinly sliced (losing the melt in the mouth quality to the meat) and as for the cheese,

I am not sure where to start. It had the consistency of melted plastic and tasted of very little (back note of a Tesco 5p bag in there or an Asda one perhaps). It was bizzarely inferior to the vegan cheese I had a Greazy Vegan which had the excuse of not in anyway actually being cheese. In short it gave processed ” plastic” cheese a bad name.

I would hazard a guess that the cheese here was a pre-packed slice of leerdammer, which has no place in a Philly cheesesteak. How it got its weird melted, yet solid, consistency God only knows. Slam it on a flat top, catch it just as it is about to burn and then let it solidify at its leisure under a heat lamp at the pass I suspect.

If you want to see what a real Philly cheesesteak looks like then look at Pat’s King of Steaks.

This most certainly wasn’t a Philly cheesesteak, although it was a perfectly serviceable steak sandwich (albeit with an awful piece of cheese on it). The steak was cooked a decent pink and was reasonably tender (and properly seasoned). The onions and peppers were nicely cooked down and caramelised.

The bread used was ciabatta and to me was not right for this sort of sandwich. It was too big and required too much chewing to get through it. I discarded it eventually and just dug into the steak (top rump I would say) onions and peppers.

It came with the option of salad or fries.

I went for fries, which were piping hot and nicely crisp. Decent size portion I thought. A sweet mustard mayo (reminiscent of Big Mac burger style sauce) made for a good dip for my chips.

A New Yorker (reuben) sandwich (£10.50 with standard fries or a salad) 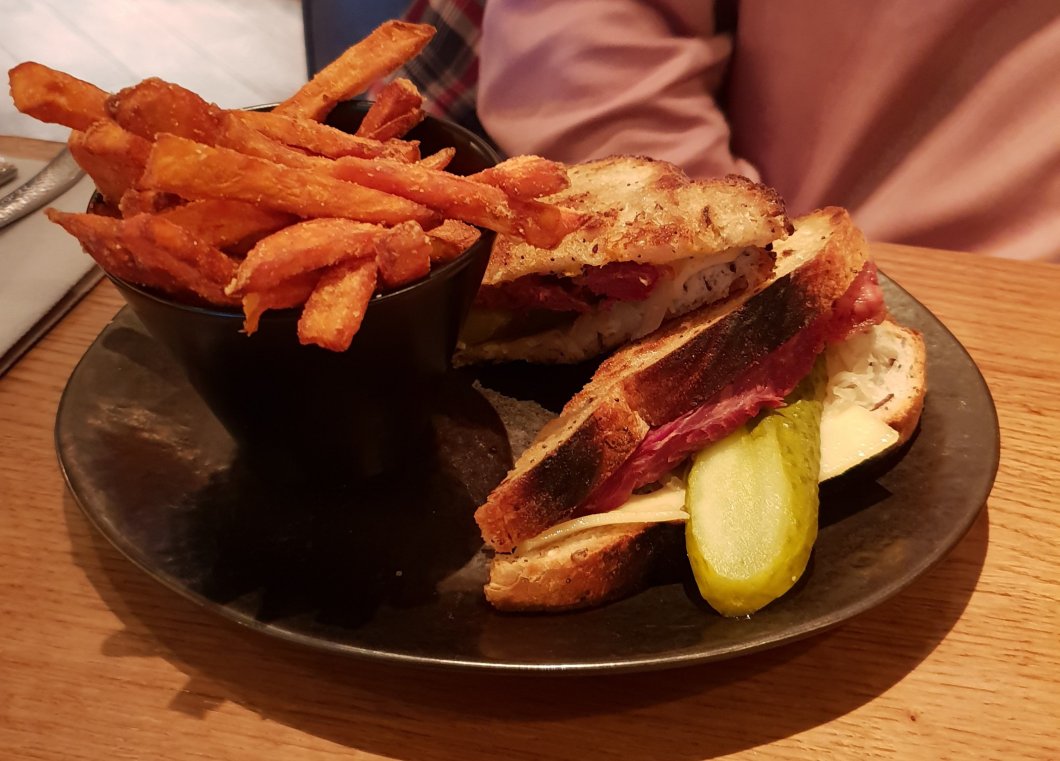 looked the part (with a nice crisp pickle and sauerkraut) and was deemed to be a decent enough effort at another classic. The main quibble with it was (as with my “cheesesteak”) the meat element was cut rather too thick.

It also seemed to lack the Russian dressing of a classic Reuben.

Sweet potato fries (a £1 supplement over standard ones) were (as with the potato fries) very nice. Crisp, hot and properly seasoned.

A cajun chicken wrap (£9.25) had a decent ratio of chicken to salad in terms of the filling,

but lacked the hit of cumin, coriander and paprika you expect from Cajun spicing. I noted the description on the menu referred to coleslaw and in hindsight (looking post meal at the photos) it didn’t seem to be present. Was it forgotten or just at homeopathic levels within the wrap?

A chicken burger (£8.25 – in its most basic form sans fries) was a decent looking beast and got the thumbs up from the person who ordered it. 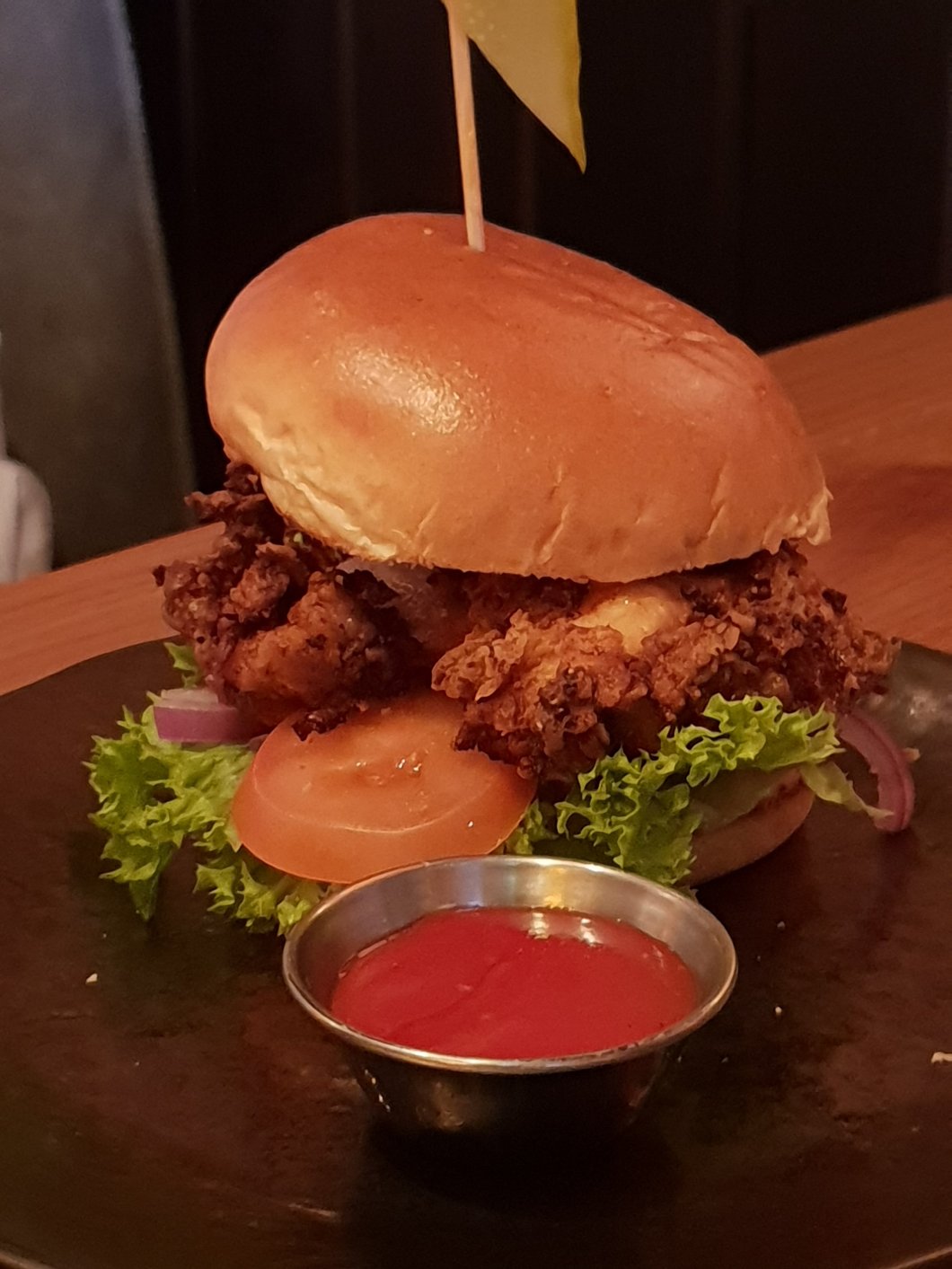 A nice crisp, large piece of tender and juicy chicken was encased in a crisp coating. This came in a brioche bun and some fresh, crisp looking, salad items. Probably the best of the items we ordered

The place is a cocktail bar and I suspect on that basis that these are its forte (you would certainly hope so). Work friends tell me the selection is wide, the cocktails are good and there is plenty of theatre in their making and presentation (ticks all the cocktail bar boxes it seems). My friend (and poor sap who has worked with me for nigh on 20 years), Rachel, said she got a lump of coal/charcoal in one she had (I assume intentionally)!

Looking at the selection

I can’t say there was anything that made me think “Despite it being a work Monday, I’m going to have a cocktail” (especially with coal in it).

They do have a decent selection of non alcohol ones (all at £4.50),

but none of them really enthused me if I am honest (and the bubblegum one positively horrifies me).

The wine list isn’t actually that bad in terms of what is on it, bearing in mind that wine is far from the place’s focus.

The Azevedo vinho verde is a nice wine, but £27 is a bit steep when I can pick it up retail for under £7 at Waitrose (and they will undoubtedly be able to get it a fair bit cheaper wholesale).

On the reds, it is always nice to see a Barbera (good food wine) on a list and £24 is not a hideous mark up when I can get it for just under a tenner retail. Other prices are a bit leery (creeping well over 300% at times in terms of list price compared to retail), such as the Finca Valero at the top of the list of reds. This is priced at £22 on the list and retails at £6.25

As we didn’t fancy a cocktail (non alcoholic or otherwise) and the wine was a non starter, as we all had to go back to work, we defaulted to soft drinks. Rather annoyingly there were no details of these (bar from the non alcoholic cocktails) so we had to be content with a verbal summary from our server.

I went for a Fevertree ginger ale, which was a rather scandalous £3.50 for a 200ml bottle (now I know why they don’t have a list of non cocktail soft drinks – if those not drinking booze knew the prices up front everyone would order tap water). As I can get 4 of these for £3 retail (at Waitrose, hardly the cheapest place) this, to me, represents one hell of a mark up. As a swanky, non alcoholic, cocktail (which requires multiple ingredients and a bit of mixology to make ) is £4.50, I struggle to see how £3.50 for a dinky bottle of ginger ale can be justified other than as a bit of gouging of non drinkers and designated drivers.

Seems rather unfair that those that don’t or can’t drink booze appear to be subjected to some of the highest mark ups.

Overall the food offered was OK, but didn’t really wow and was (I thought) a bit on the pricey side. 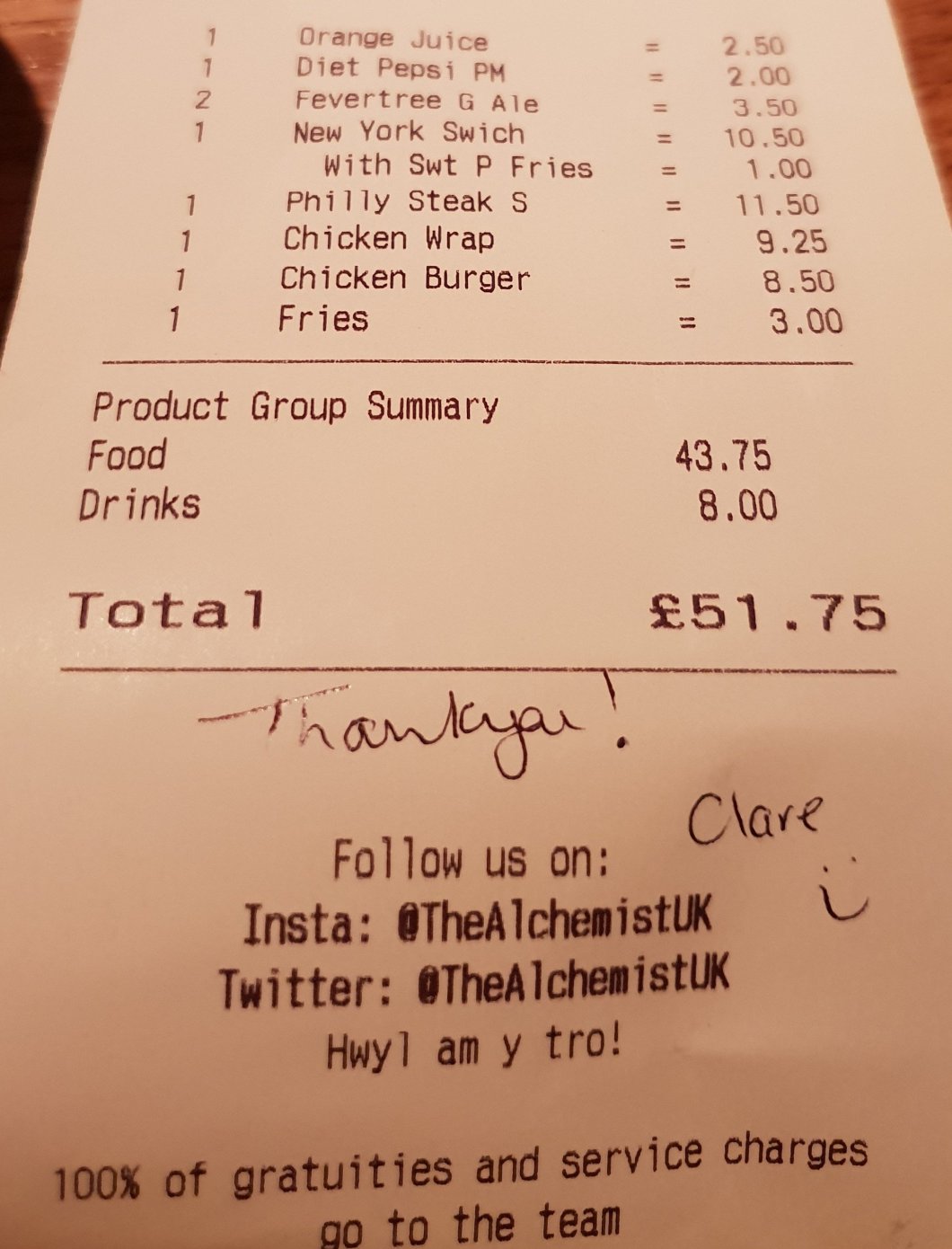 and it will be a lot better than the steak sarnie (masquerading as a Philly Cheesesteak) here.

In the Alchemist’s defence it can be argued that it is a cocktail bar that does food, but if you say you have a restaurant (as they do) and are charging the sort of prices they do then that doesn’t really wash.

Would I go back? Probably not. Whilst there is nothing intrinsically wrong with the food, it hardly wows and I think it is expensive for what it is. Also their big draw, in the form of cocktails, holds limited interest to me.

Having said this, lots of people in work (who are cocktail fans) seem to love the place. So if you are into cocktails

and need some food on the side then this may well be the place for you.

Despite my unenthusiastic view of the place, they must be doing something right as the bar area was packed on a Monday lunchtime by the time we left (2pm ish), which begs the question “What do I know?”.