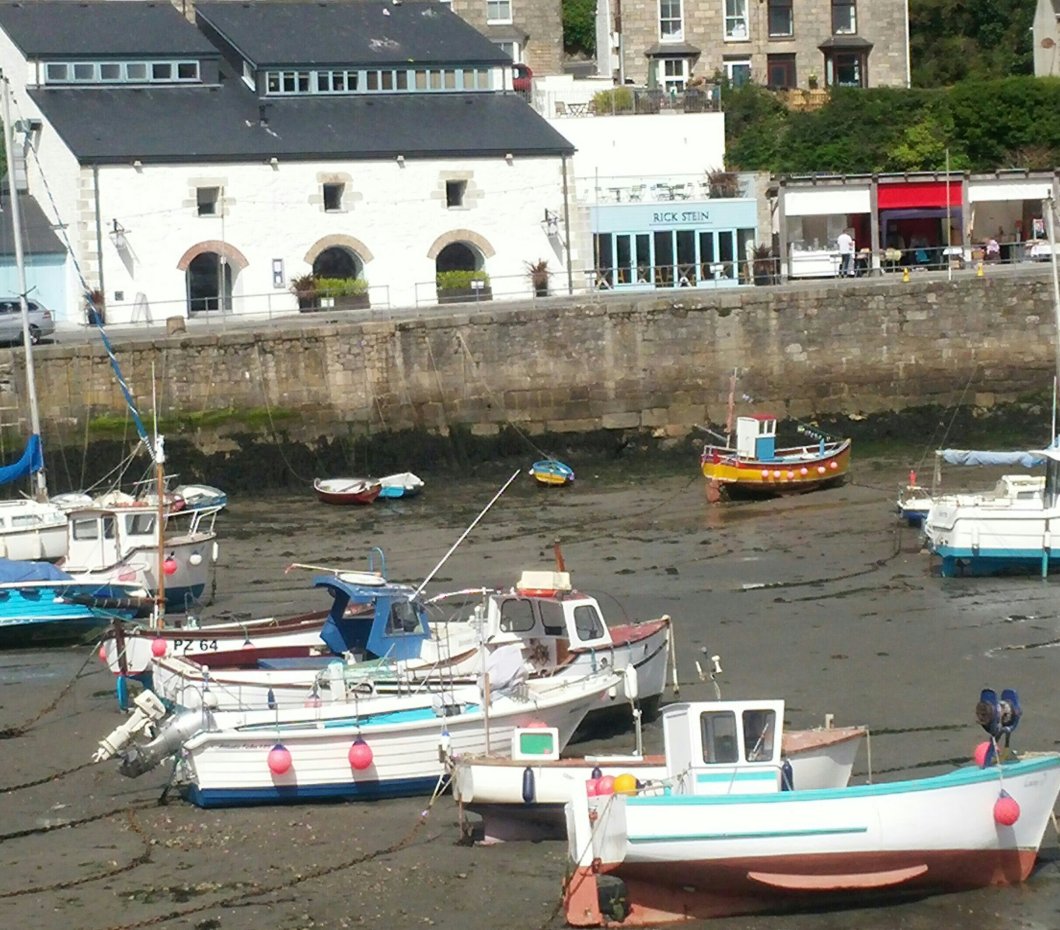 When it comes to the TV, Rick Stein is one of those people who is seemingly always doing one programme or another (Mexico is his next BBC jolly apparently). Unlike with the Hairy Bikers or Jamie Oliver, I actually quite enjoy watching Rick Stein’s programmes. With Rick Stein, there are no laboured wisecracks or mockney gibberish and he is seemingly happy to just talk about and cook food.

His “Weekends Away” series packages together three of my great passions in life (after Mrs. SF and the dogs of course) in the form of food, drink and travel.

From his original base of Padstow, having turned it into Padstein, Stein seems intent on total Cornish domination. He has an astonishing 10 restaurant, cafes and pubs dotted around Cornwall, with a further 4 places outside of Cornwall including a recently opened gaff in London  (after allegedly vowing he would never open a place there) in Barnes.

One of his many premise in Cornwall is located in, a favourite spot of Mrs. SF and I in terms of holidaying in the UK, Porthleven.

On our last visit to Porthleven in December we plumped for dinner at Kota over Rick Stein’s but with Mrs. SF and I back in Porthleven we though we would give Rick Stein’s a go this time. We therefore booked in for a Wednesday night, with the added bonus of Mrs. SF treated me to dinner. 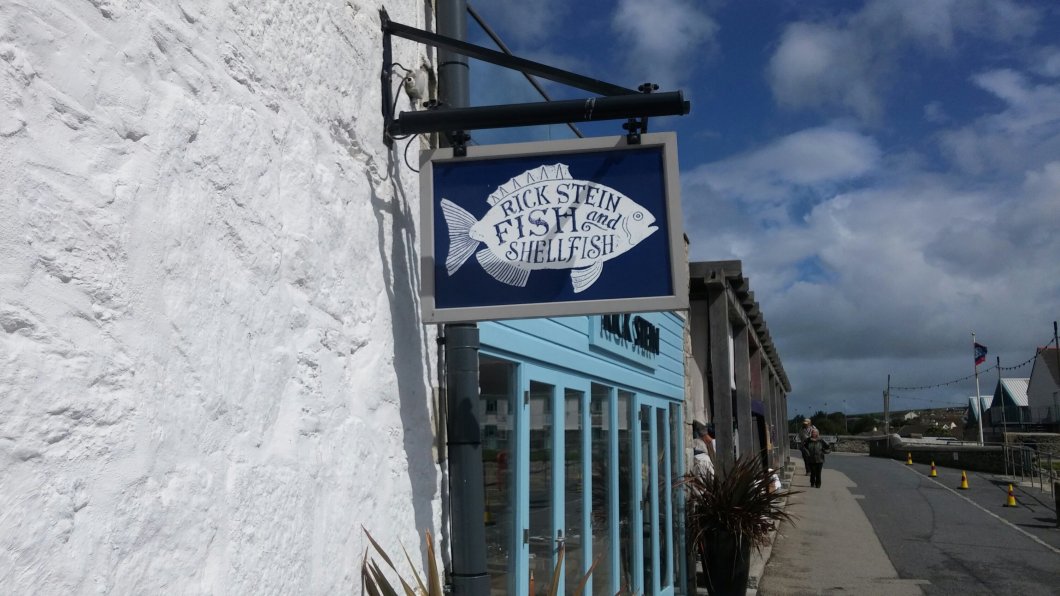 A lovely building on the harbour side which, prior to Stein taking it over, looked set to slowly fall into disrepair or become apartments. 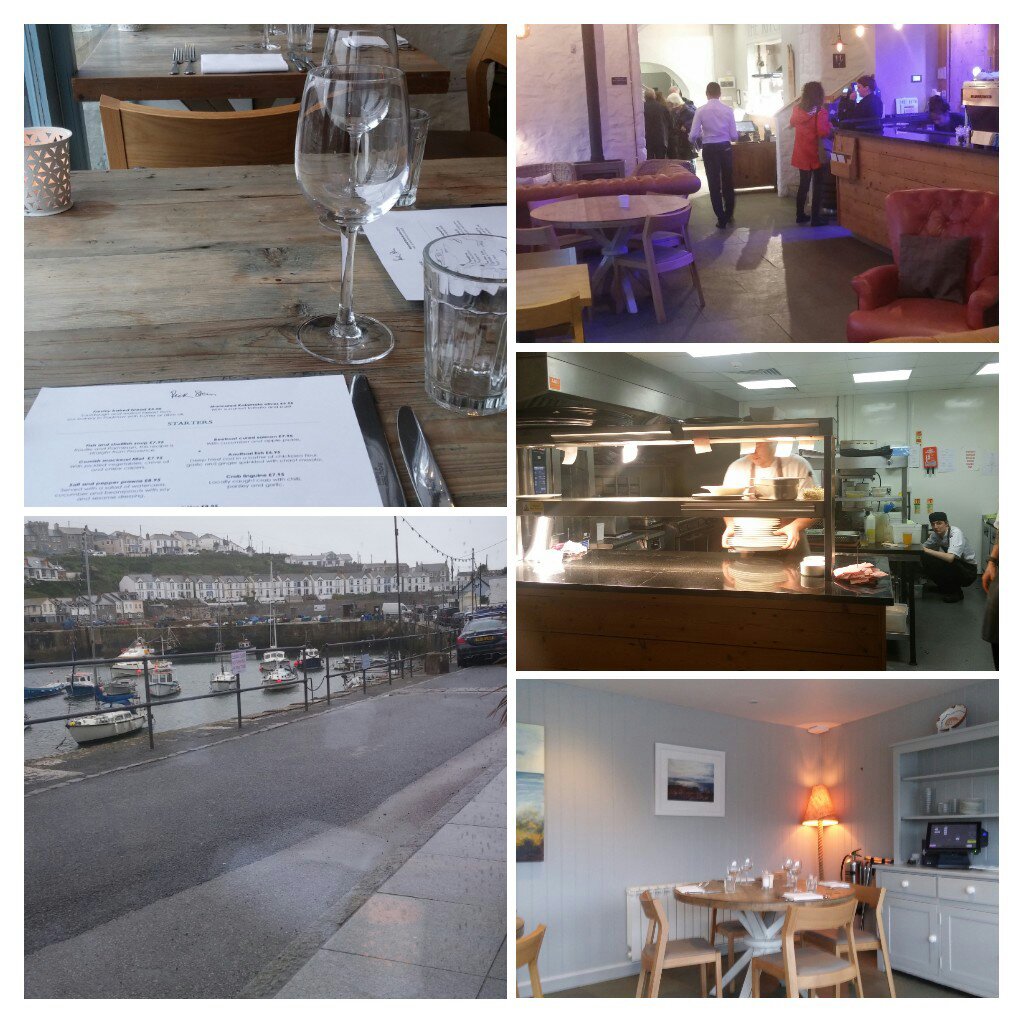 Inside it is very nice, with an open kitchen as you walk in (plus lots of Stein merchandise) and a cosy area by the bar with leather sofas.  I would hazard a guess (could be wrong – often am) that Stein senior has never actually cooked a service in this place, with his son (I believe) heading up the kitchen brigade.

There is a mezzanine level, but we were led to a glass fronted area looking out over the harbour. For the Summer and al fresco dinning there is an outside terrace area.

Bit bracing on day of our visit for a fresco dining regrettably. 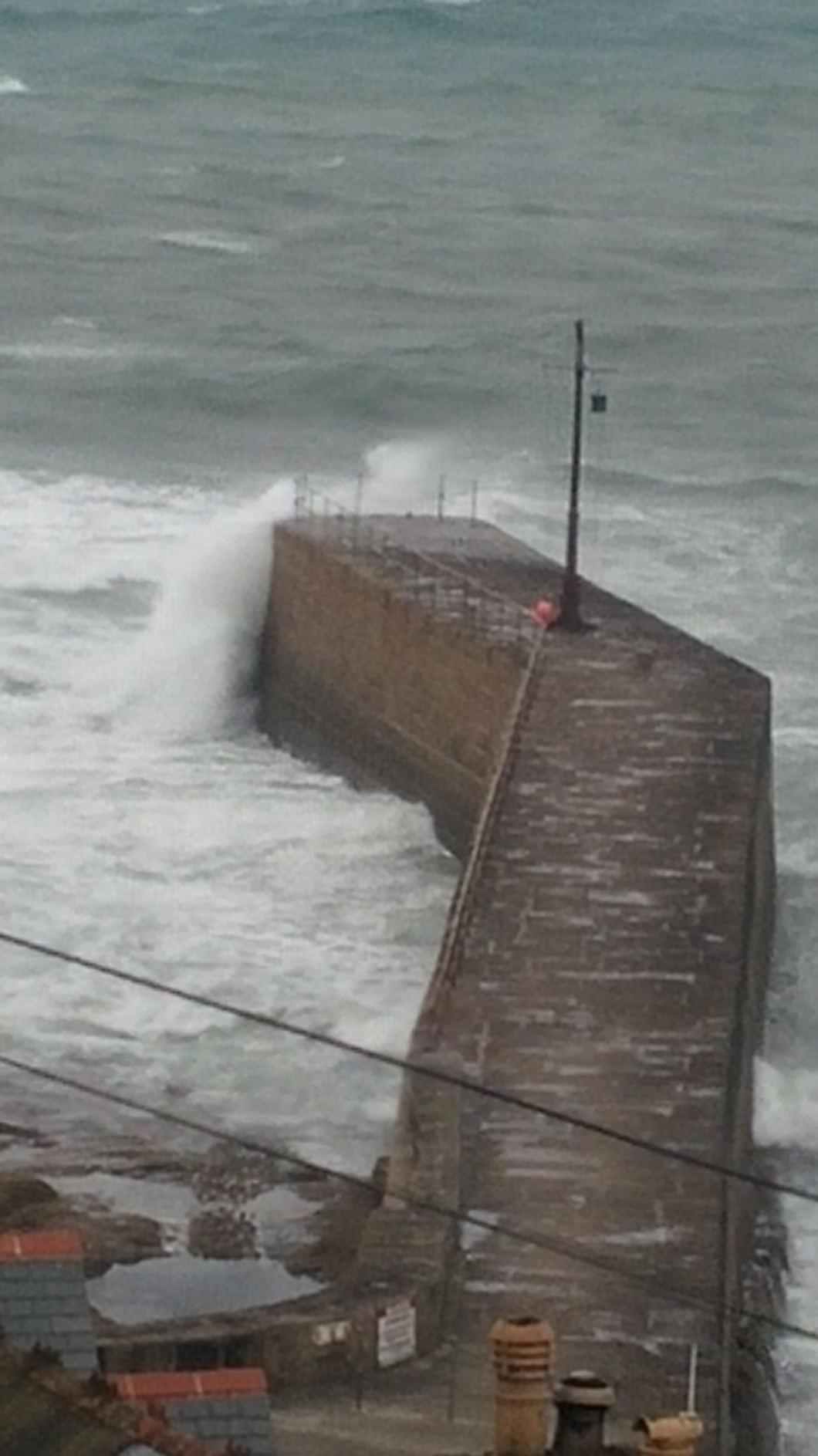 The menu is much more limited than that at Stein’s flagship premise in Padstow and the menu has a more bistro feel to it. It is also reflective of Stein’s travels (courtesy of the BBC). 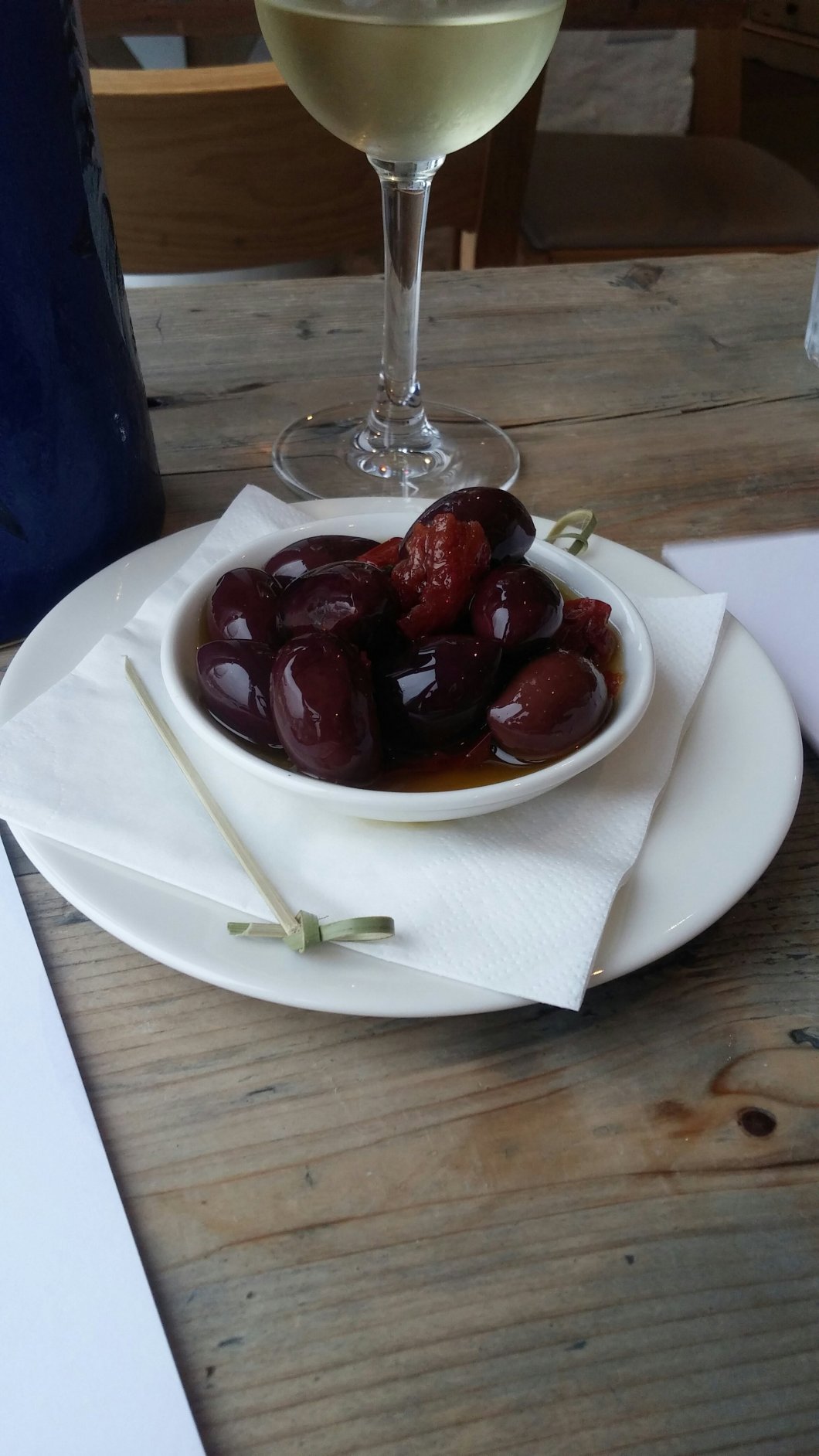 For starter I was torn between the mackerel fillet and the fish soup. I plumped for the soup as I think a fish soup is a good test of the mettle of a kitchen which specialises in fish. If it gets fish soup right you are in safe hands for other fish dishes, but if they bugger up the soup you know you are in trouble.

The soup here is a pretty darn good one. Rich and thick, it had a lovely depth of flavour to it (that only comes from using a proper fish and shellfish base stock). It came with a really punchy rouille and some parmesan, with made for a very satisfying dish. My only complaint was I could have done with a couple more of the croutons, with 3 seeming to me a bit mean for the £7.95 price tag. 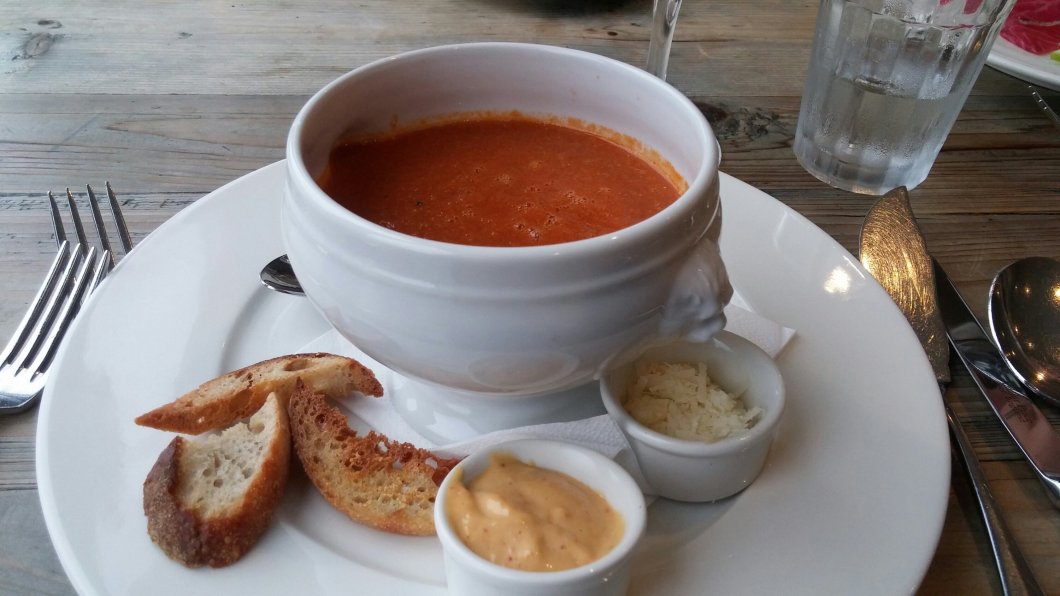 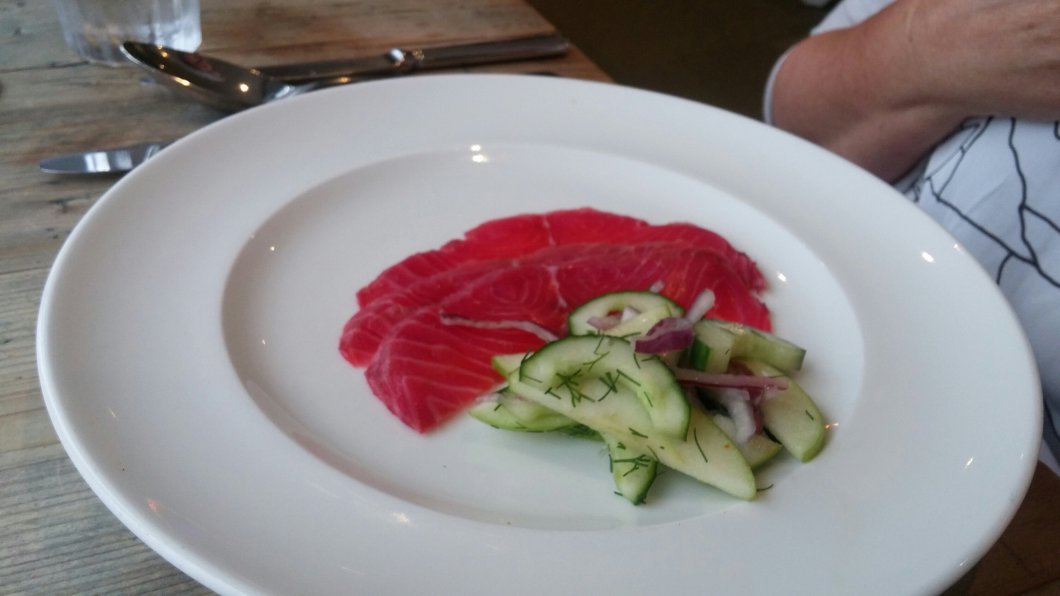 On to the mains, whilst the menu has meat options, to me it would be perverse in a place owned by a chef famous for his seafood and with fish and shellfish in its title to go for anything other than something from the sea. Odd mind that out of the 8 mains only half are seafood.

Again mackerel tempted me, but I am a sucker for a decent bit of plaice cooked on the bone. Very underrated fish, in my opinion, the plaice.

What I got was a very nicely cooked piece of quality fish, which came away easily from the bone. Nice to see they had properly trimmed it so as to get shot of those fiddly skirt bones. 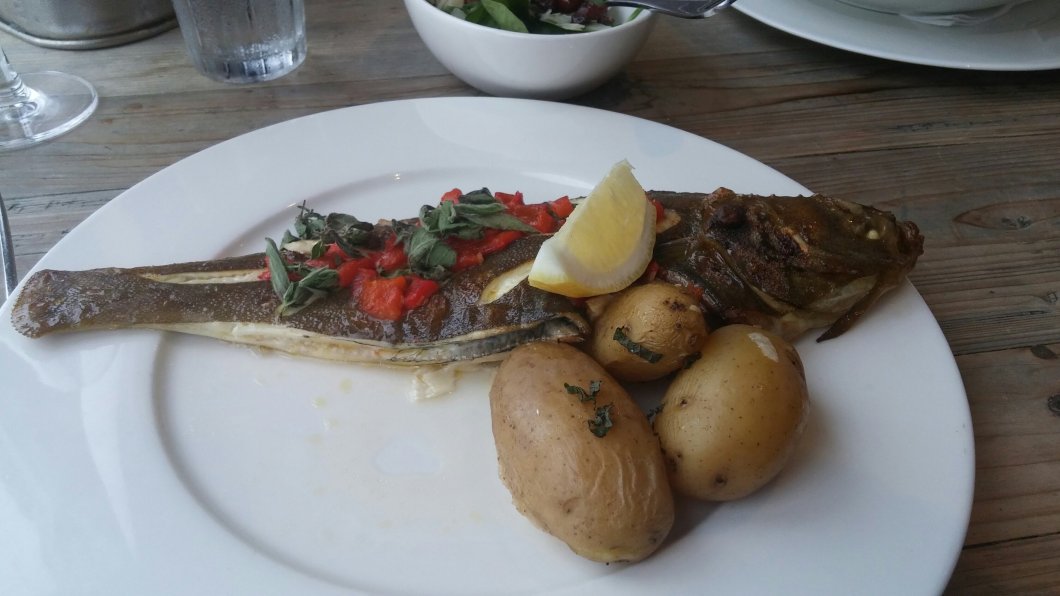 I liked the addition of peppers, garlic and oregano, which gave the dish a Mediterranean feel. Bit more, however, of them would have been nice.

I polished it off, leaving very little on the bone 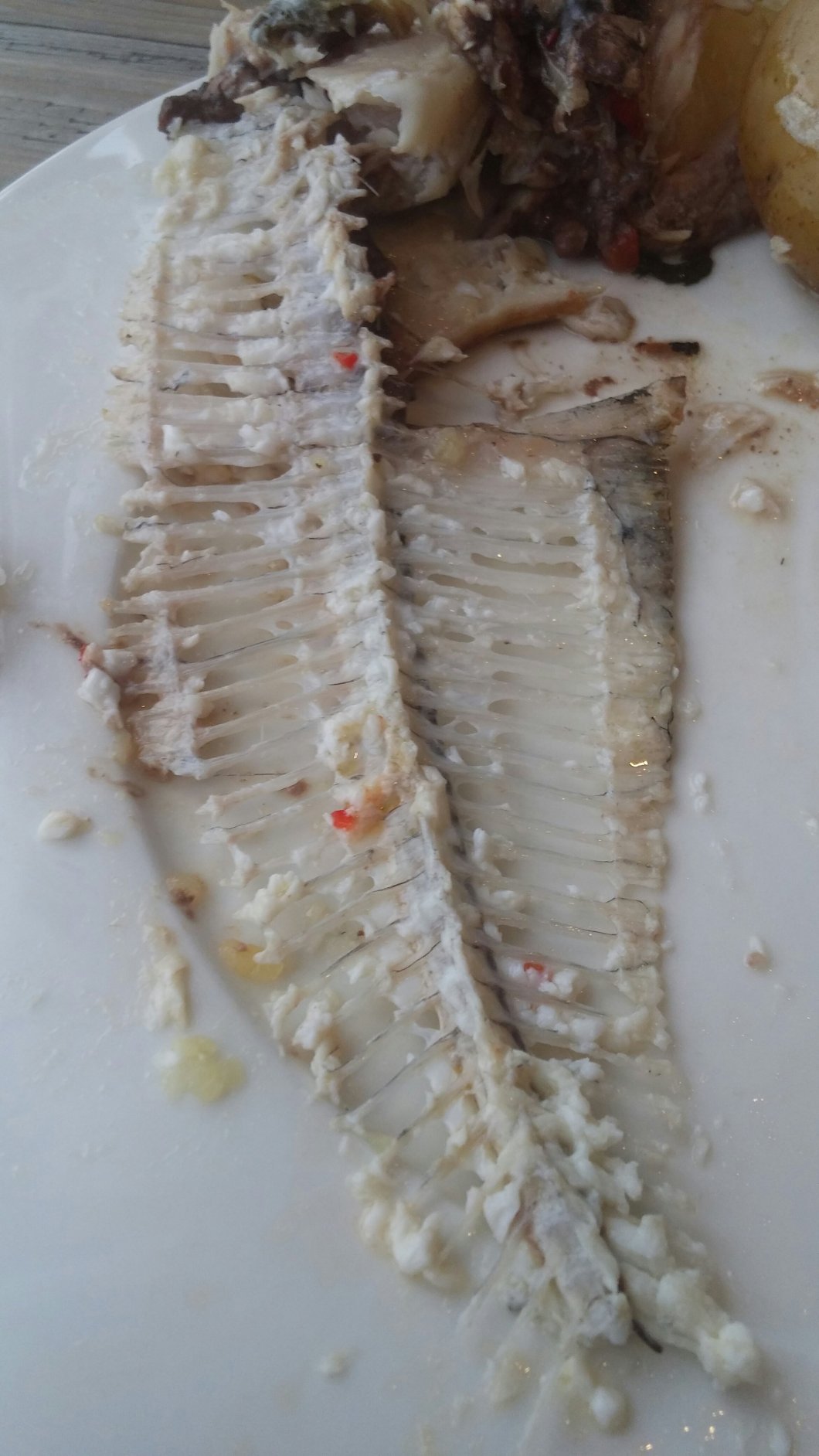 At £16.95 I thought it fairly priced but do think it could have had with it some dressed leaves or a bit more of the peppers (the plate looked a bit bare with just the fish and 3 spuds on it).

There is a bit of gentle upselling re the sides and with the lack of much else, bar from the fish and spuds, on the plate I ordered the spinach and pancetta salad (£3.75) which took my main to over the £20 mark. I enjoyed the spinach and parmesan, but did find the pancetta in balsamic a bit sweet. Personally I thought the balsamic had been a little over reduced.

Mrs. SF went for a fish curry in the form of Goan Cod curry (£14.95). A spicy rather than hot curry it was more shy on the coconut front (excuse the pun) than I was expecting, but had a good flavour to it. The fish was perfectly cooked and wasn’t overawed by the spicing. 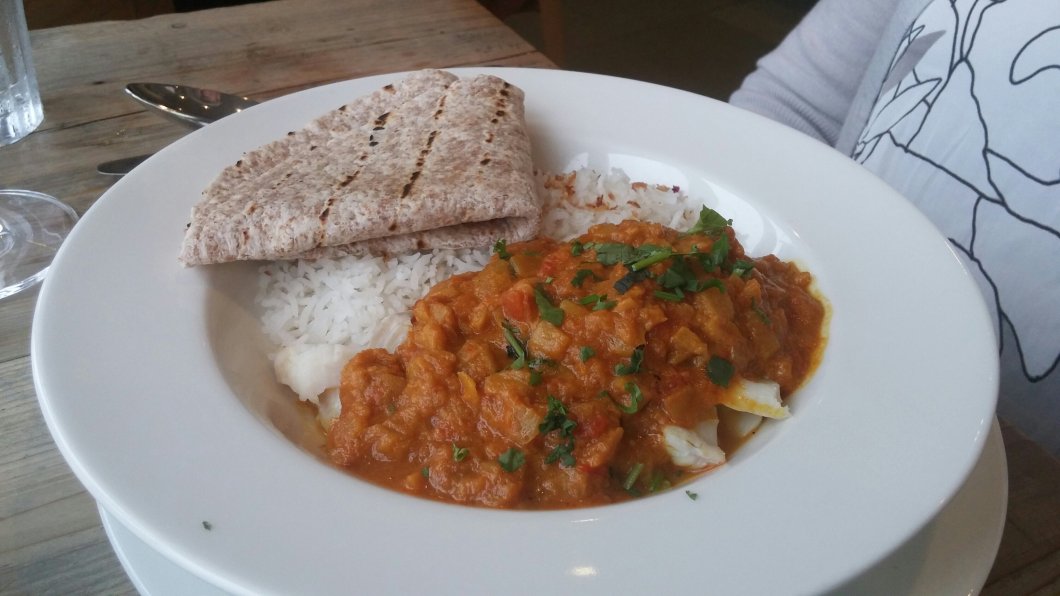 The accompaniments were some perfectly fluffy pilau rice and a chapati. The latter was a bit of a surprise as I tend to associate (probably wrongly) the chapati with Northern India and the pao/pav with Goan Cuisine. Mrs. SF branded it a pleasing, if perhaps slightly pedestrian on the spicing, dish.

Despite being quite full, we both opted for a pud from the interesting sounding dessert menu. 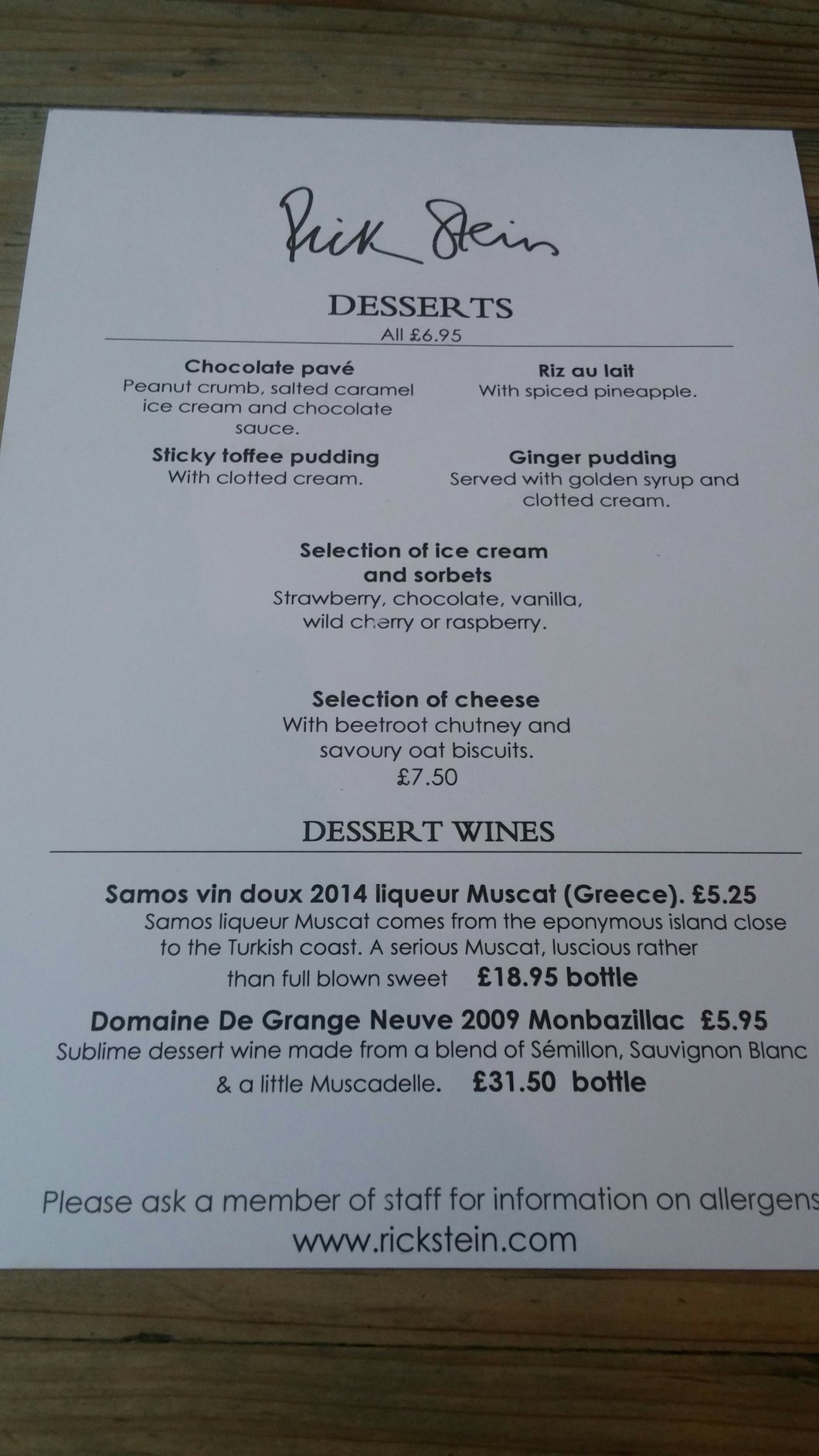 My initial thought was to go with the riz au lait, with spiced pineapple, which sounded rather nice. I was, however, swayed by the lure of the salted caramel ice cream and peanut butter crumb that came with the chocolate pavé. 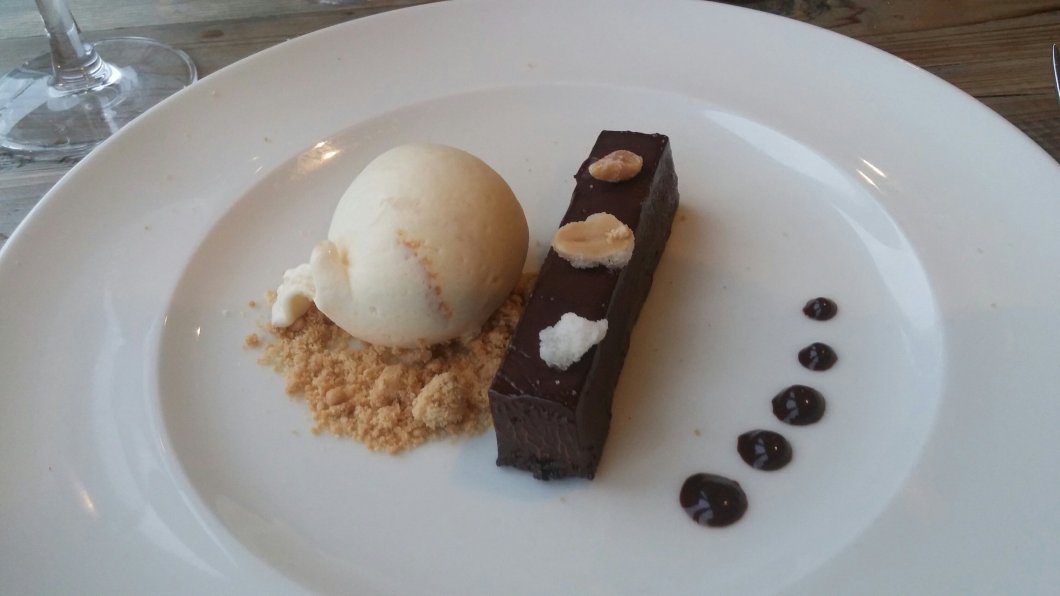 Nicely rich (but not cloyingly so) chocolate pavé, with the star of the show being a really good salted caramel ice cream. The only disappointment was the crumb, which was a tad lacking in the promised peanut butter flavour. 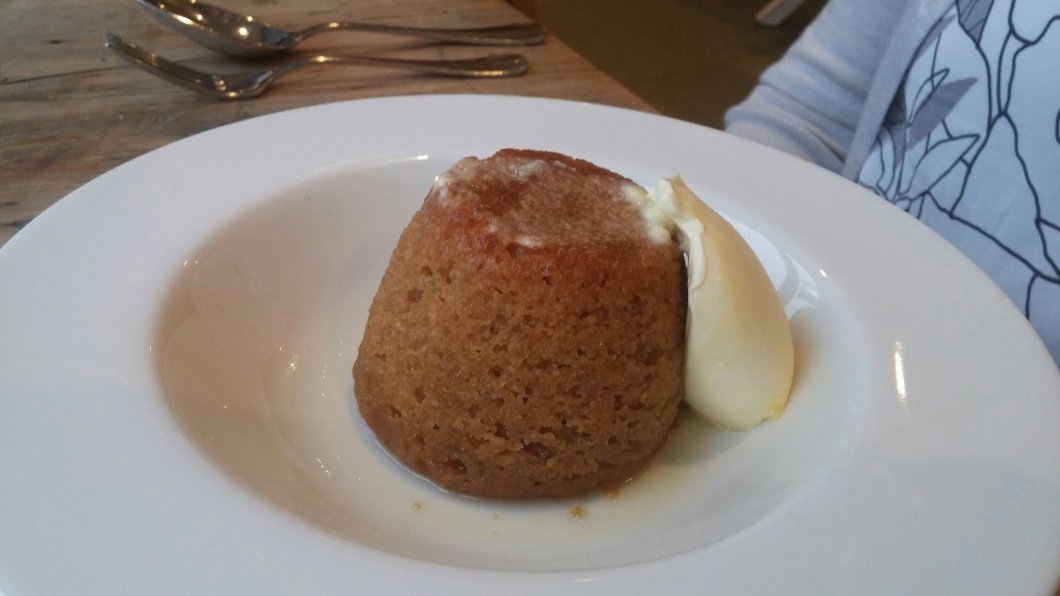 I did think the latter an odd dish to have on what I assume was their Summer menu.

On the booze front there is a reasonable selection and it is always good to see sherries on a list, especially a Puerto Fino (a rarity on lists in the UK) which we had as an aperitif.  Shame the sherries are not available by the bottle, as they are such good food wines rather than just being an aperitif.

As a whole, the list seemed a bit pricey to me with some serious mark ups in the mix. 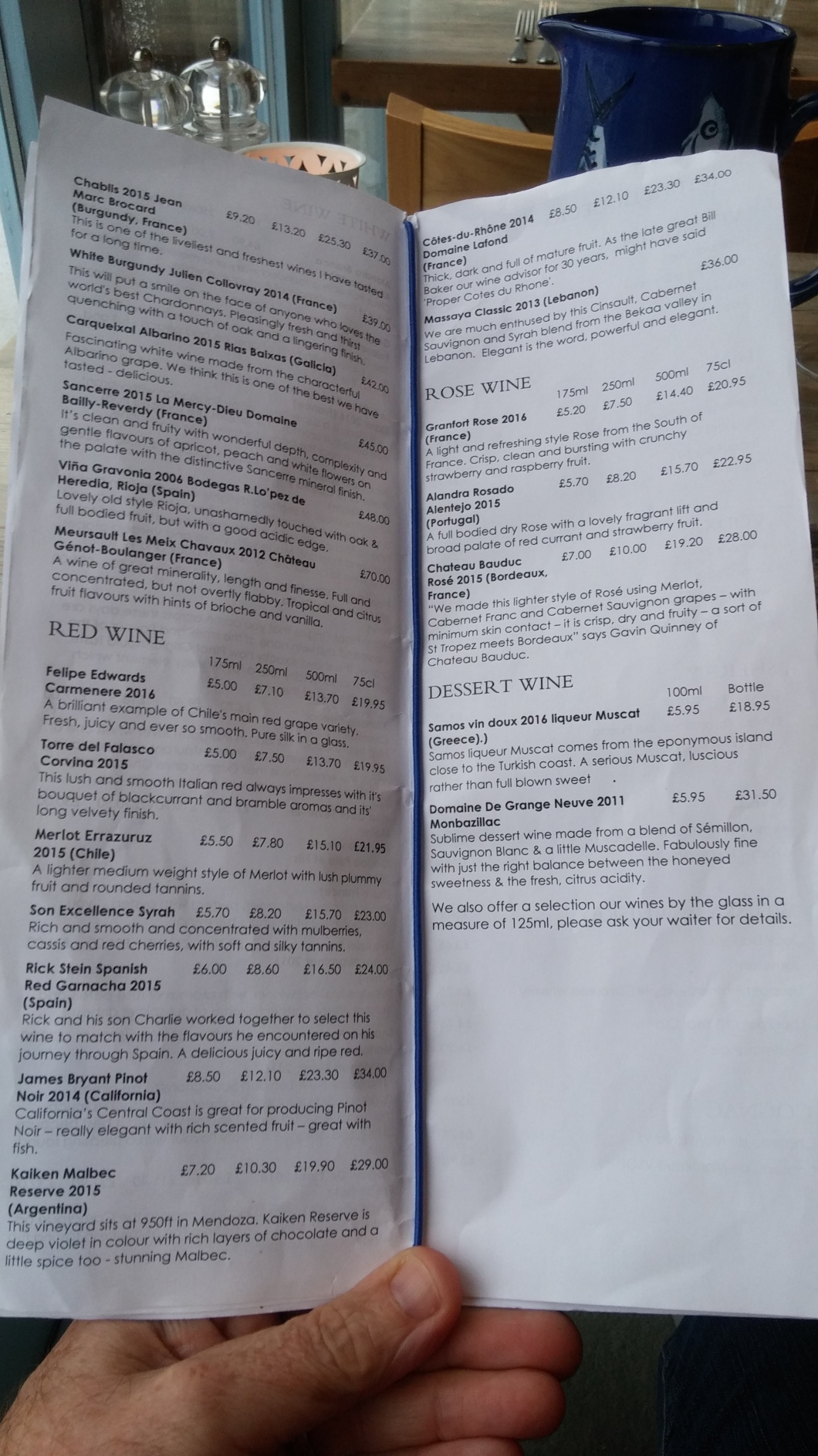 £42 for a Carquexial Albarino when it retails at Nicholls and Perks at around the £11.50 mark (nothing like what Rick Stein’s place will have paid for it I can tell you) makes for an eyewatering mark up.

After much humming and harring, I went for a bottle of Picpoul de Pinet from the Languedoc. Great fish wine this, with nice lemony flavours (think lemon peel and lemongrass) and some herbal notes. 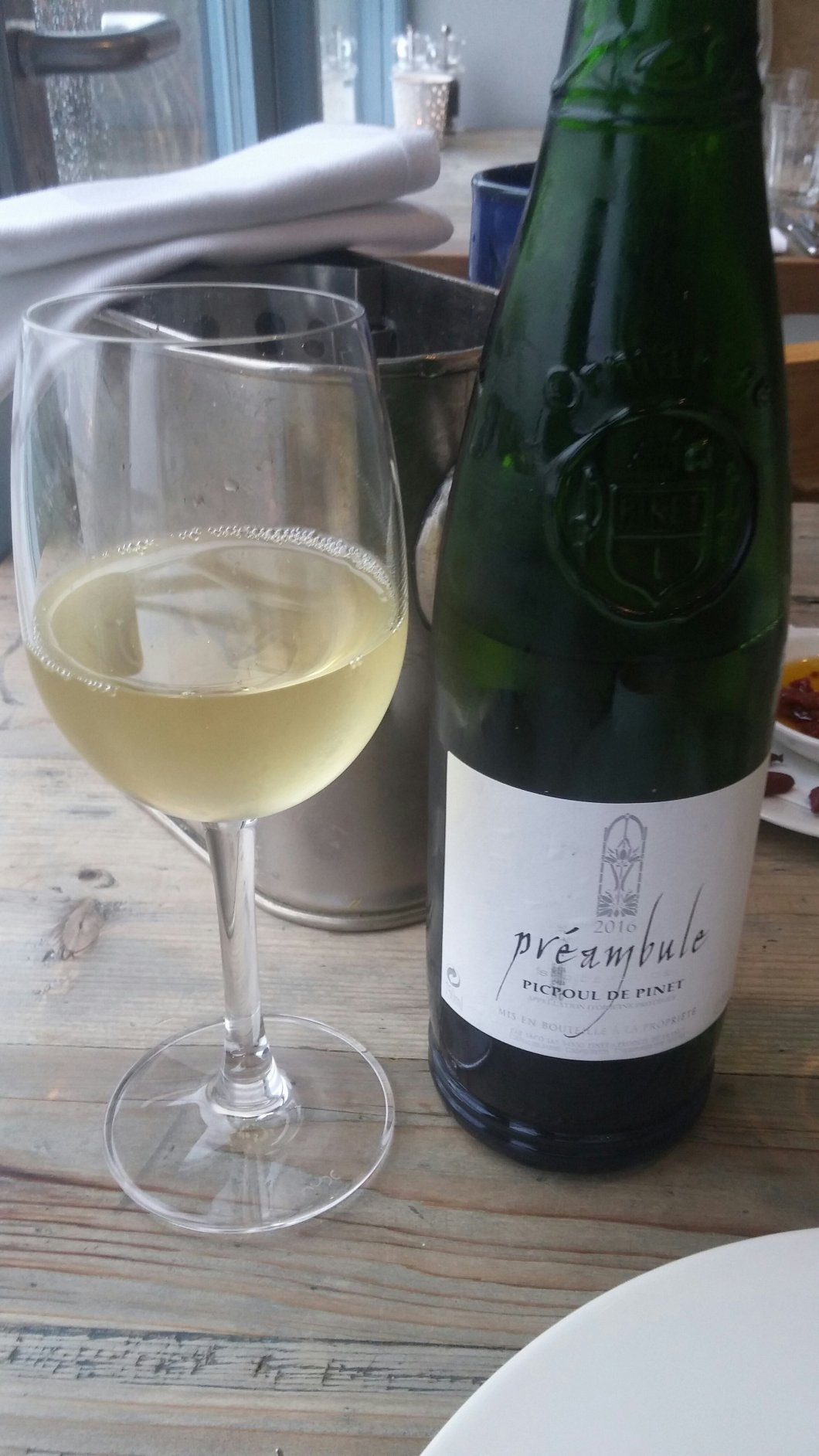 Worked very well with the plaice and had enough about it to cope with the mild spicing of the fish curry. Very pleasant wine to drink with fish or on its own. Tad pricey I thought though at £32 (difficult to track down retail, but have seen it at around the £8 mark so looking again at a pretty hefty mark up here). 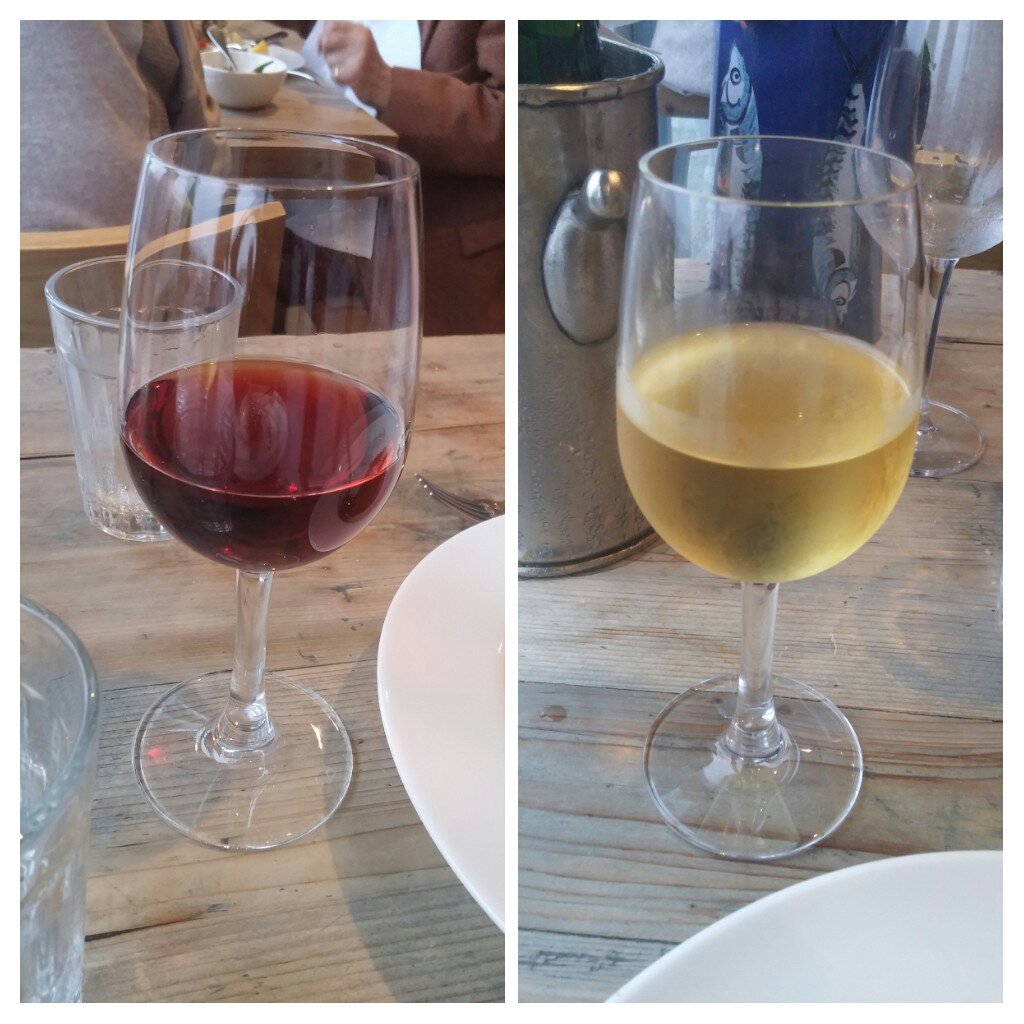 The monbazillac was all barley sugar and marmalade, perhaps a bit light for either dessert, whereas the port was a good match for the chocolate based desert (nutty and figgy, with a hint of the medicinal about it).

The bill did seem to add up a bit, coming out at a smidgen under £120 (we did have a fair bit of booze mind) 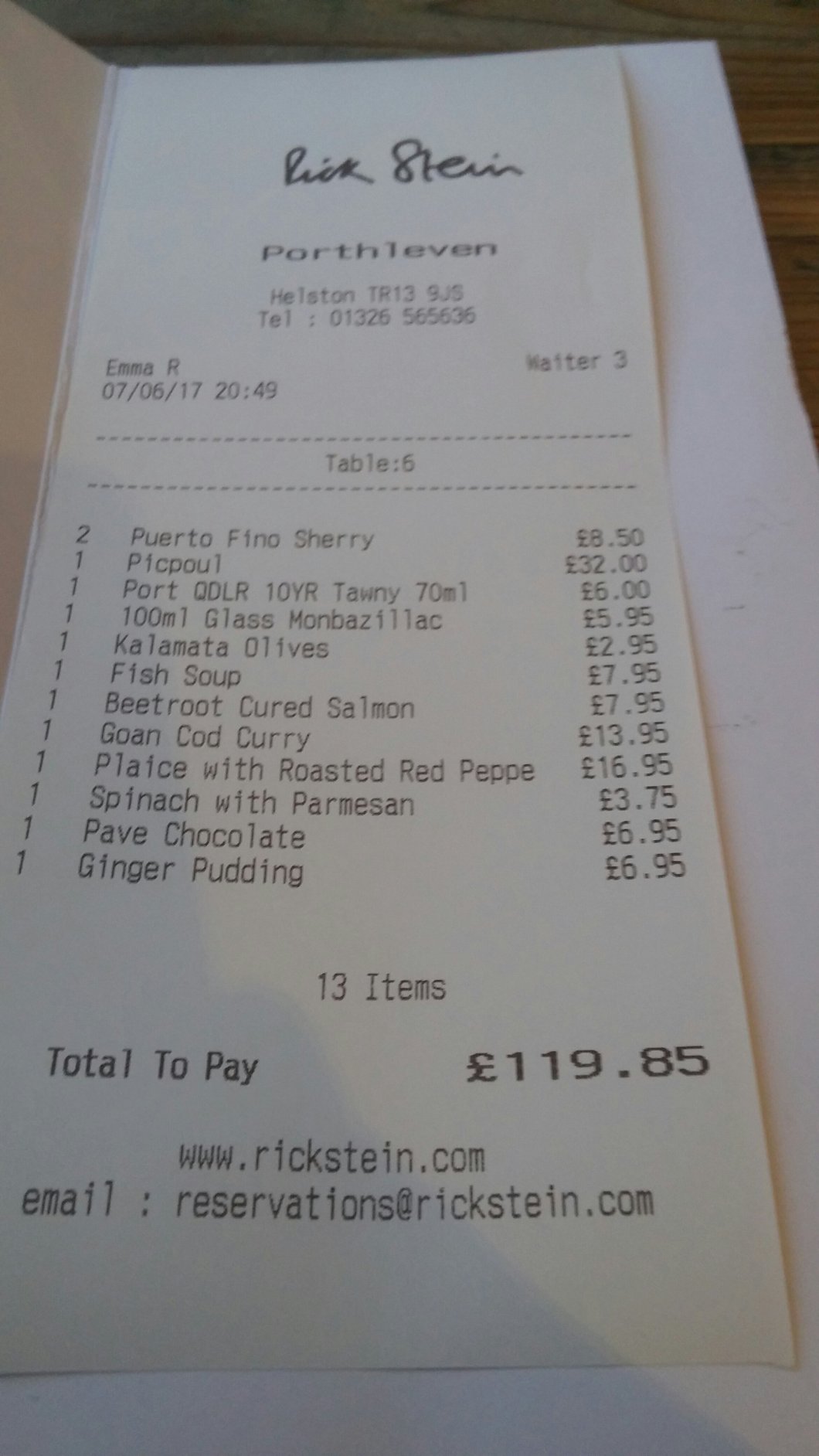 This is a similar price to what I would regard as Rick’s main competitors in Porthleven, Kota.

Would I go back? Yes – as the title suggests it is a nice place which cooks a nice plaice.

I do, however, wish they would have on offer some specials which take advantage of the fact that Porthleven is a working fishing port. There is nothing on the menu that suggests they utilise stuff coming from the Porthleven fishing community which to me is a great shame and a wasted opportunity.

A specials board utilising what day boats, operating out of Porthleven, bring in would to me be a nice touch and make the menu less formalaic.

My other slight whinge about the place (not the plaice) is the wine mark ups are a little bit on high side I think. The food pricing seems fair, the wine pricing much less so.

Due to this its prices are on a par with Kota’s (whose food is a bit more pricey,  but they mark up their wine less) and Kota is in my opinion overall a better option for a one blow out/celebration meal in Porthleven (food there is more adventurous and sophisticated that at Stein’s). Rick Stein’s is, however, definitely a nice additional/alternative option if you are in Porthleven.

They do do an lunch/early bird (before 18.30) set price menu, which looks to be quite good value for money. 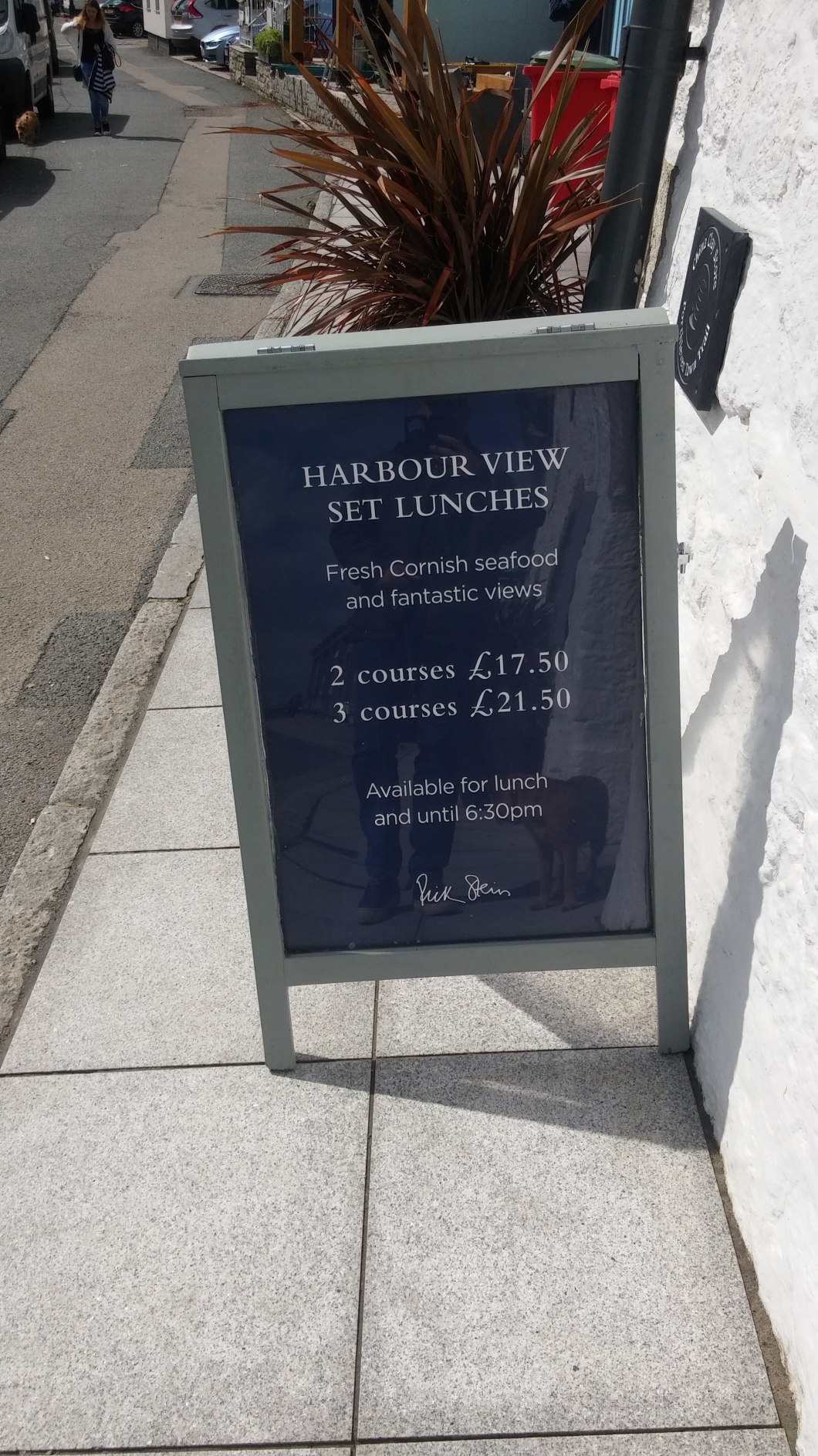 It is also a shame (particularly with Chalky) that it is not dog friendly, but there are plenty of other dog friendly options in Porthleven if you are holidaying down there with your doggies

Since my visit there has been a fire at this place (on the 11th June). Luckily no one was hurt and the damage seems to have been pretty limited. It has already reopened it seems.

Here’s hoping that the recently opened Seafood Shack in Cardiff is able to cook fish to the standard of this place and Kota in Porthleven. Mixed reports to date, have to say, but will pass judgement in my own good time.