The last (boozy) supper and there is no doubting this Thomas! Thomas by Tom Simmons, Pontcanna, Cardiff.

With a lot of hospitality now in hibernation (kudos to those that are battling on and seemingly making a decent fist of it, if bookings at Heaney’s are anything to go by) I managed to get a last boozy supper (well late lunch) in before the latest restrictions (which I can’t say I understand – see last week’s post) came into play.

Having tried the Thomas by Tom Simmons “eat at home” offering during the first lockdown (of probably 999 – the way it is going, but hope springs eternal with the vaccine now in play), 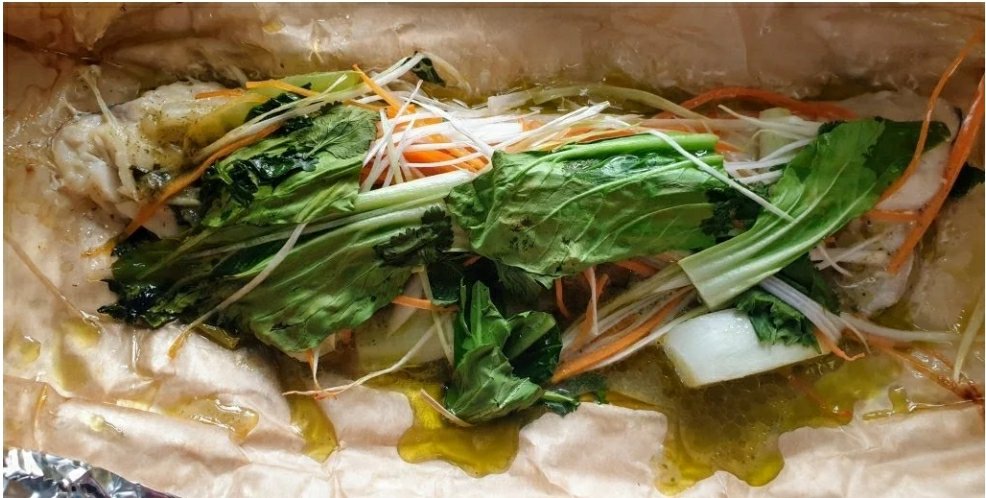 I have been keen to try their sit down offering for sometime. For one reason or another, however, I have never got around to visiting.

With them going into hibernation until sometime in the new year (with another lockdown now seemingly a given, who knows when that will be), due to the restrictions making their trading model unviable, I thought I better get in quick. Using up one of the many days of holiday I had left, another effect of Covid as I haven’t been away bar from a couple of  weeks stuffing my face in Cornwall, I booked a late lunch for the Friday before the guillotine came down at 18.00 that day.

Inside they have done a rather nice job of tarting the place up from its rather jaded appearance in the dying days of the Cameo Club.

A very swish (and for the foreseeable redundant) bar area 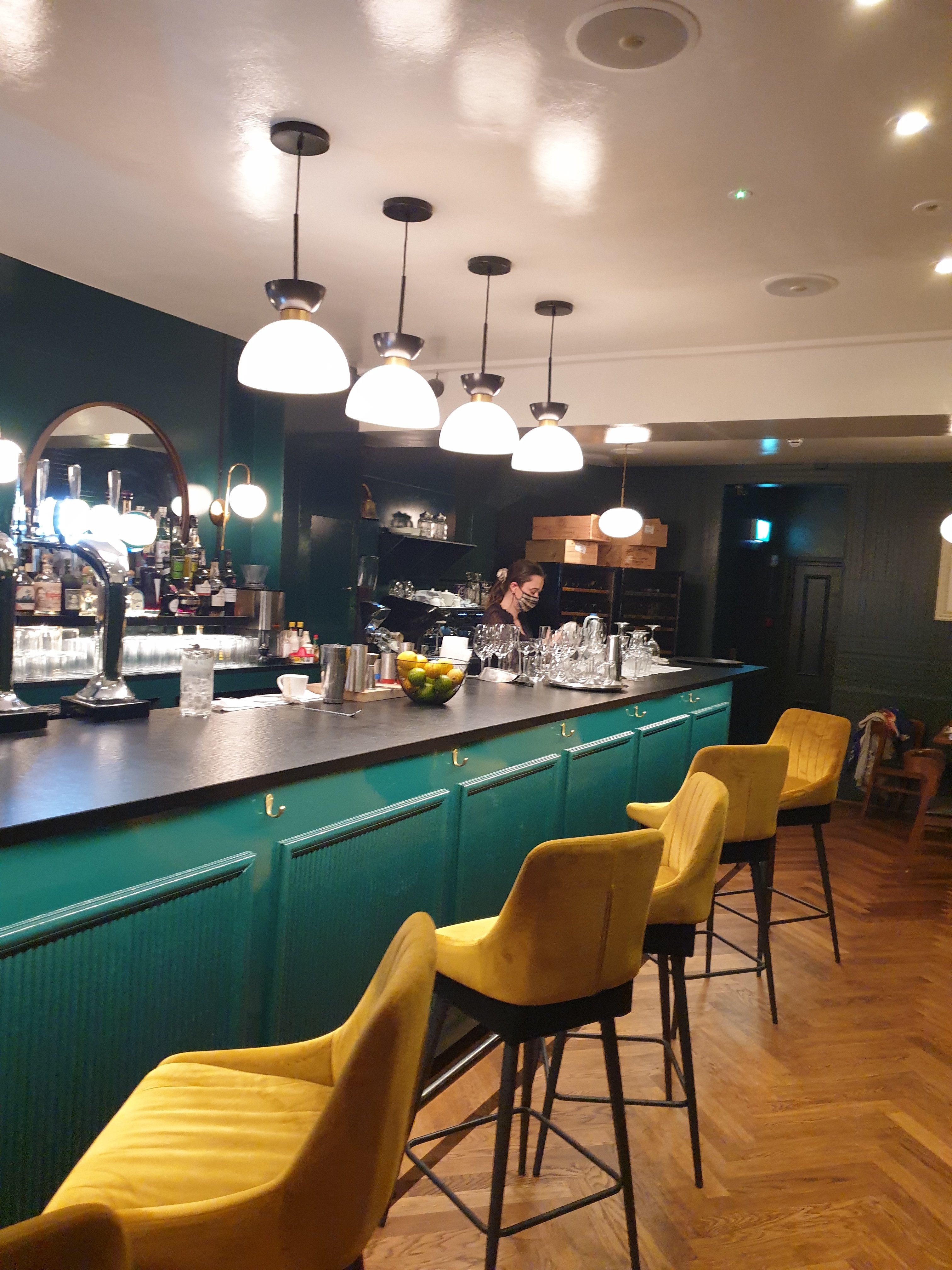 and a very nice eating area (we were upstairs), 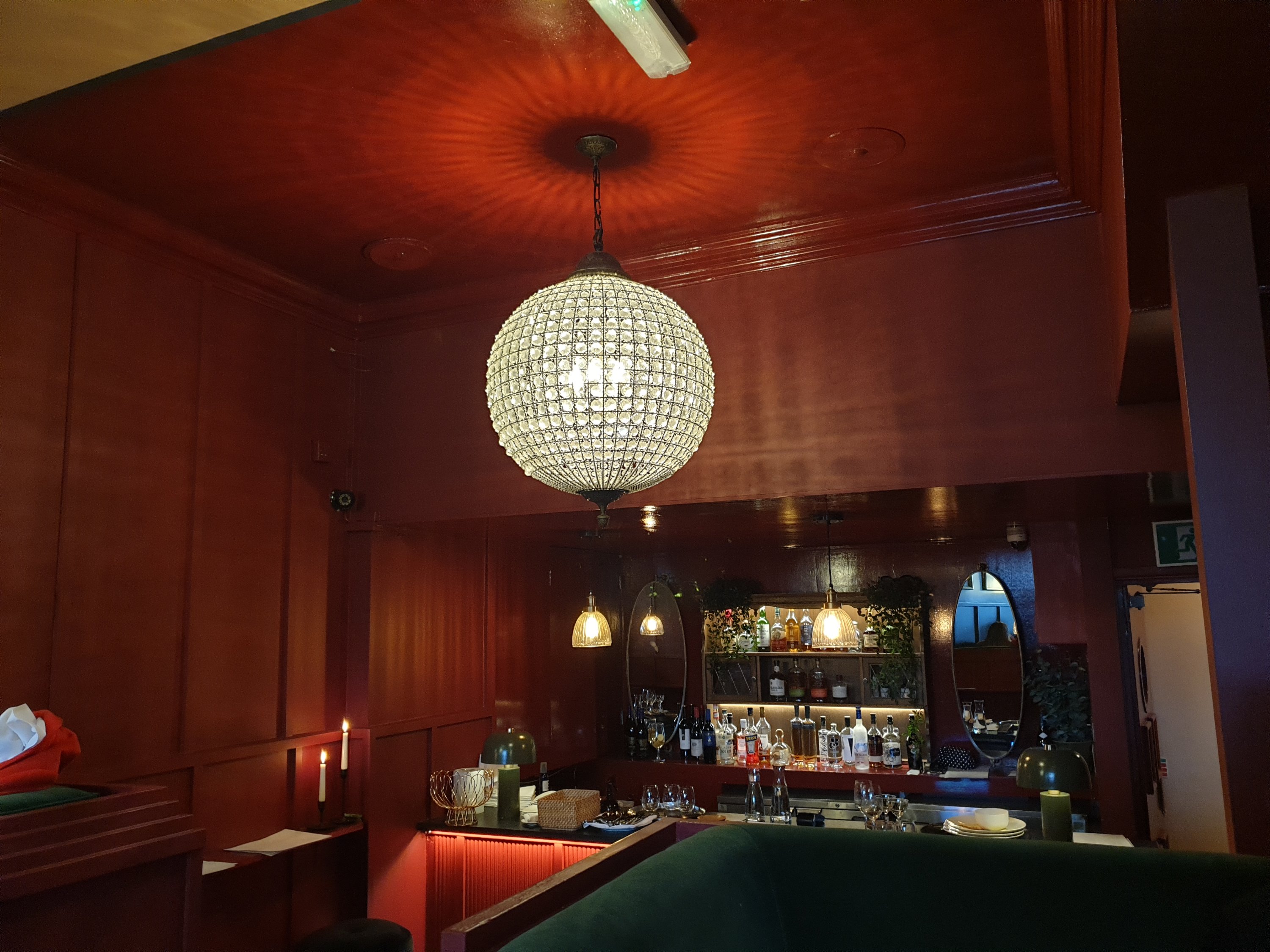 all made for a nice relaxing environment to enjoy a good feed.

Looks very speakeasy, which is unintentionally rather apt, I thought.

Whilst there is a more concise fixed price lunch menu offering two/three courses at £20/£24,

as it was in effect a last hurrah J and I decided to push the boat out and dove fork first into the al a carte menu (every little helps for a business that won’t be trading for a while).

Lots of lovely sounding stuff on the menu, I was initially tempted to go for a starter (I love smoked eel and the smoked eel tartlet sounded right up my street).

We were, however, intent on sharing everything and J turned her nose up immediately at the suggestion of the eel (I still have much to teach my young padawan in the ways of the (food) force – which is, of course, the Forcemeat/Farce 😀).

With the sharing theme in mind, we decided that the best option was to go with the “For the table” offering in lieu of a starter each.

There was certainly no disagreement as to the ordering of the crispy pig skins (£4) to kick off proceedings (whilst I hummed and harred over what wine to choose).

Lovely puffed up numbers these, with a potent seasoning liberally applied as a coating

Great for dredging through the seriously good whipped hummus adorned with a smokey chilli oil. Very, very moorish these.

Next up was a slight bone of contention between J and I, with the tea brined fried chicken favoured by me and J more inclined to go for the mushroom croquettes.

Inevitably (don’t know why I even bothered fighting the chicken’s corner) we ordered the croquettes.

Any faux resentment on my part quickly faded away when the croquettes arrives.

A really rather intoxicating smell wafted up from the plate of these, as J gave me the “I told you so” look. 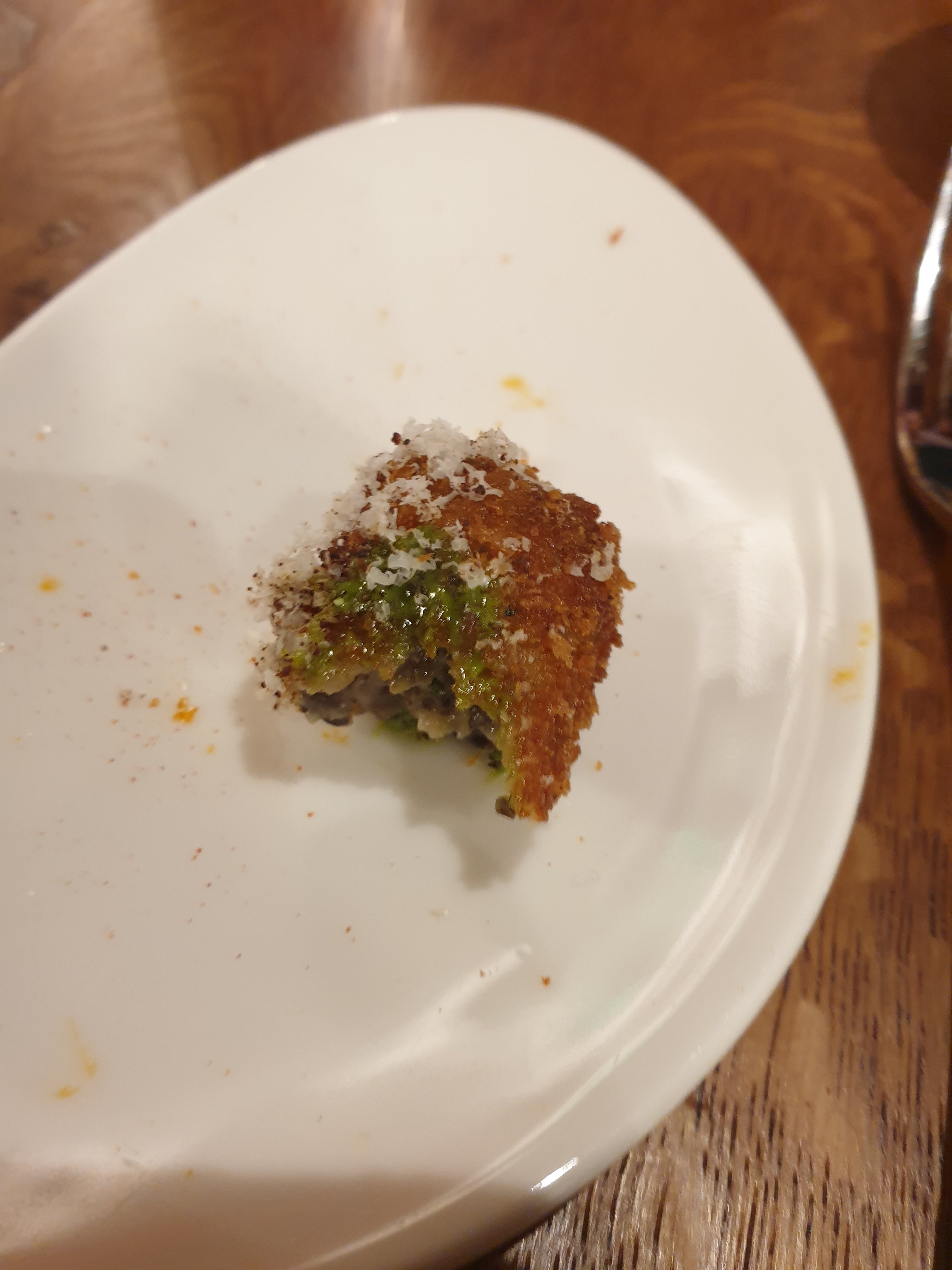 Dear Lord these were good. Gorgeous  nuggets of golden loveliness, with a light crisp shell (adored with parmesan) encasing the earthy essence of mushroom in bechamel. They sat on blobs of nicely fresh chive mayo, which added a nice zippy allium hit to proceedings.

At £5 for 4 these were a lovely bit of affordable decadence – I could have happily eaten 40 of them.

Both these and the pig skins would have made for superlative bar food I think (I like to snack when I drink booze, actually I just like to snack regardless).

Moving on to the mains, which again we decided to share to avoid food envy.

First up was a canon of lamb (£26), advertised as coming with crispy lamb belly and a lamb sauce.

Requested the rarer side of pink, the cooking of it was bob on with a blushing pink/fuchsia hue, properly rendered down fat (the bane of lamb cookery as any devotee of Masterchef will know) and a nicely crisp skin.

The advertised crispy lamb belly seemed to have morphed into a delicate tartlet, with a beautifully thin crisp pastry case and a rather good ratatouille type affair sitting atop some slow cooked lamb (the belly possibly).

The lamb sauce was rich, glossy and packed with flavour, but not too sweet or over reduced. Very much a goldilocks sauce. 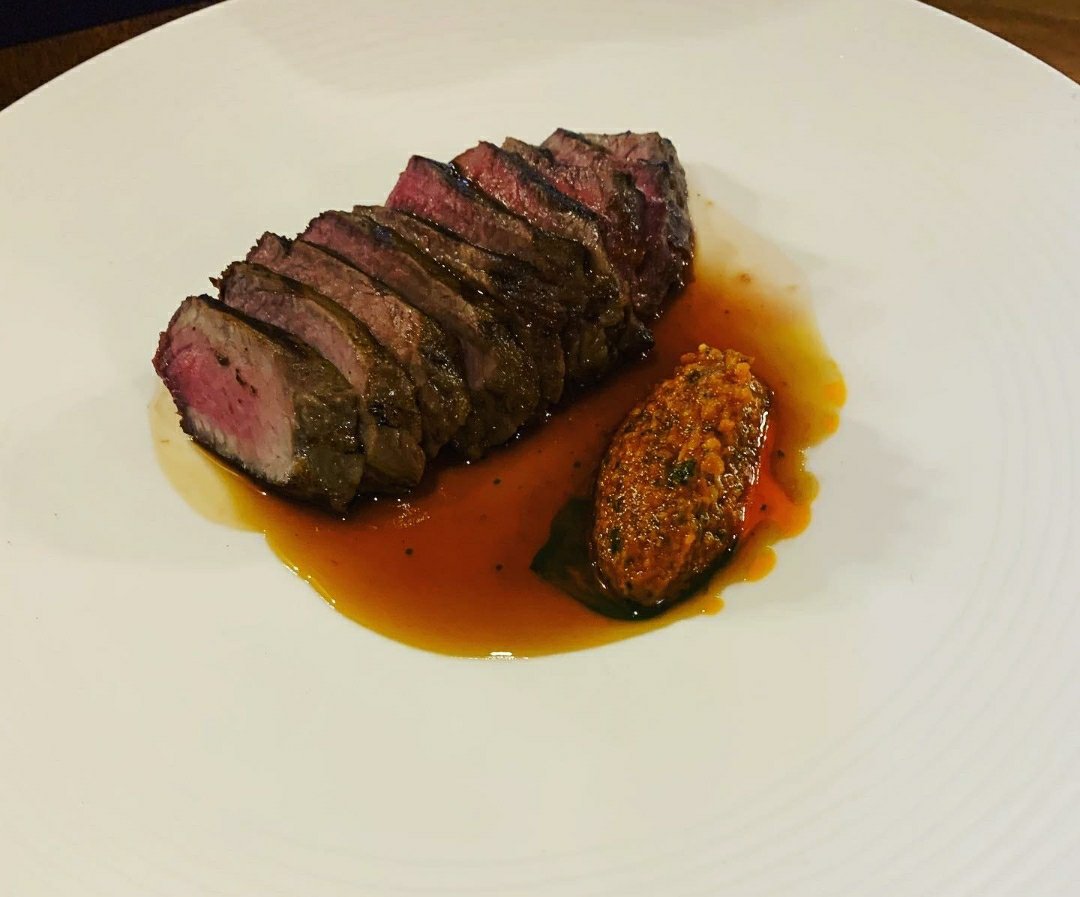 This had a good flavour to it (Iberico pork is up there with mangalitsa, as God tier pork), but I must admit I prefer it just a bit rarer (but I am just blood thirsty – it was wonderful  cooked blue at El Portal in La Rioja). Still very good, but bested by the lamb in my opinion.

The hazelnut (in place of the more usual almond) romesco and the slightly sweet sauce where both very good.

Bar from the bare minimum neither of the mains we ordered came with any veg or carbs.

Some intriguing options on the sides menu, 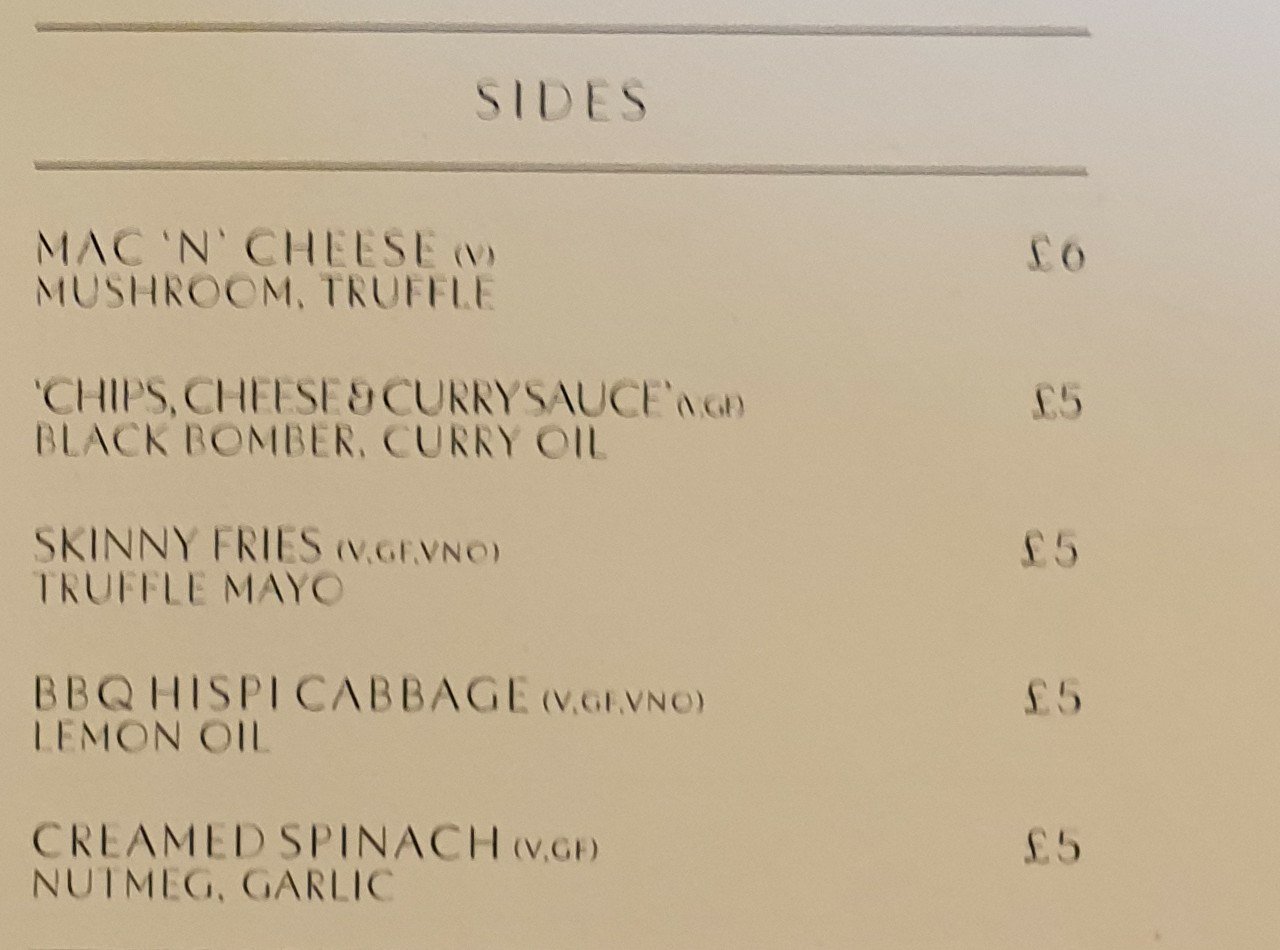 not least the chips, cheese and curry sauce. Whilst tempted by this (more out of curiousity than anything else), we passed and ordered the BBQ hispi cabbage (£5), skinny fries (£5) and mac ‘n’ cheese (£6).

The topping was a mix of seasoned breadcrumbs, thinly sliced raw mushrooms and generous blobs of a simply glorious mushroom puree, it looked like an Autumn forest floor. 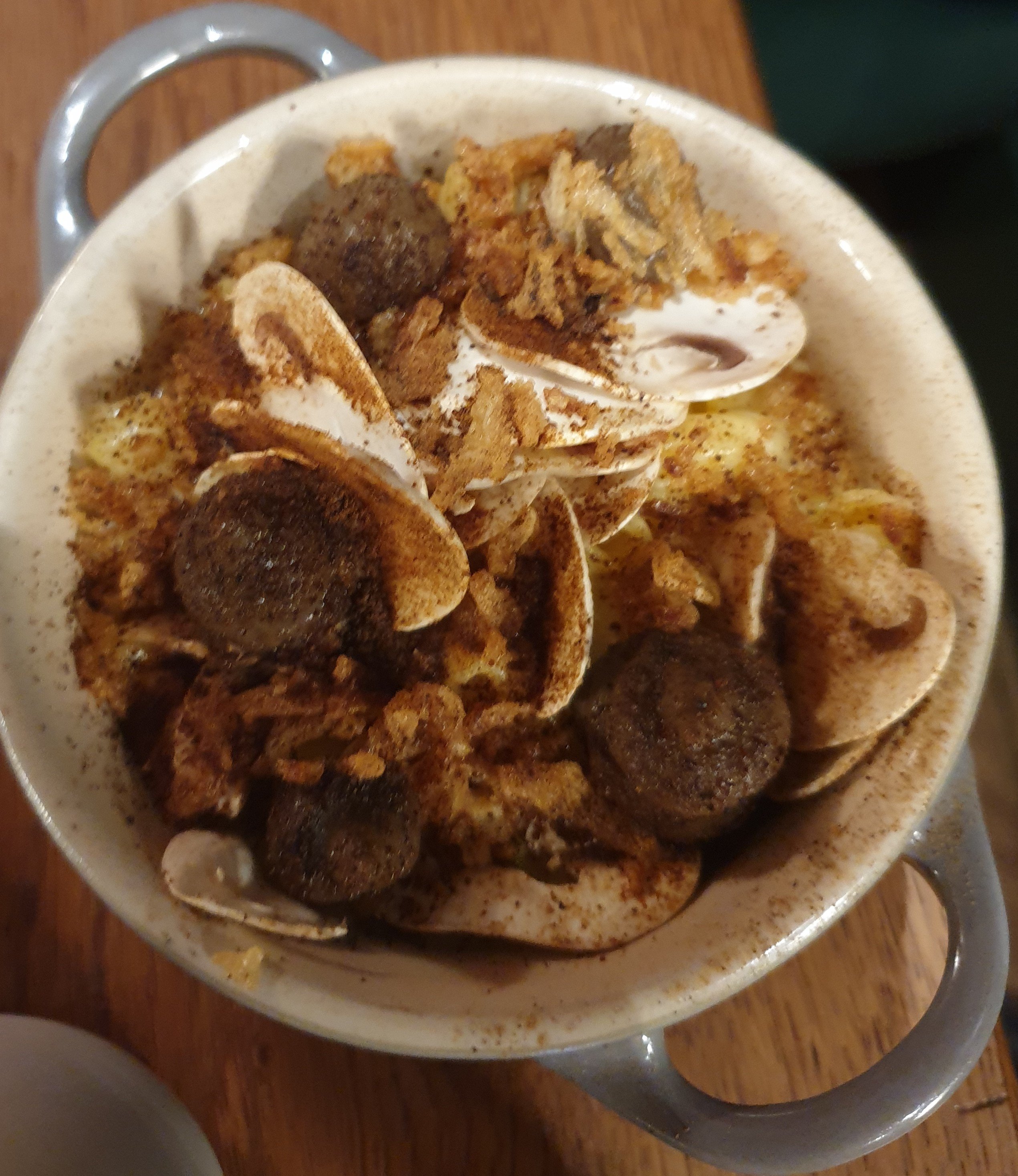 Digging in, there was gooey stringy  cheese and a luscious sauce bathing perfectly cooked pasta, all infused with that fabulous perfumed earthiness you get from truffle (of which there was plenty).

The BBQ hispi cabbage has a pleasing smokiness to it and retained just the right amount of bite. 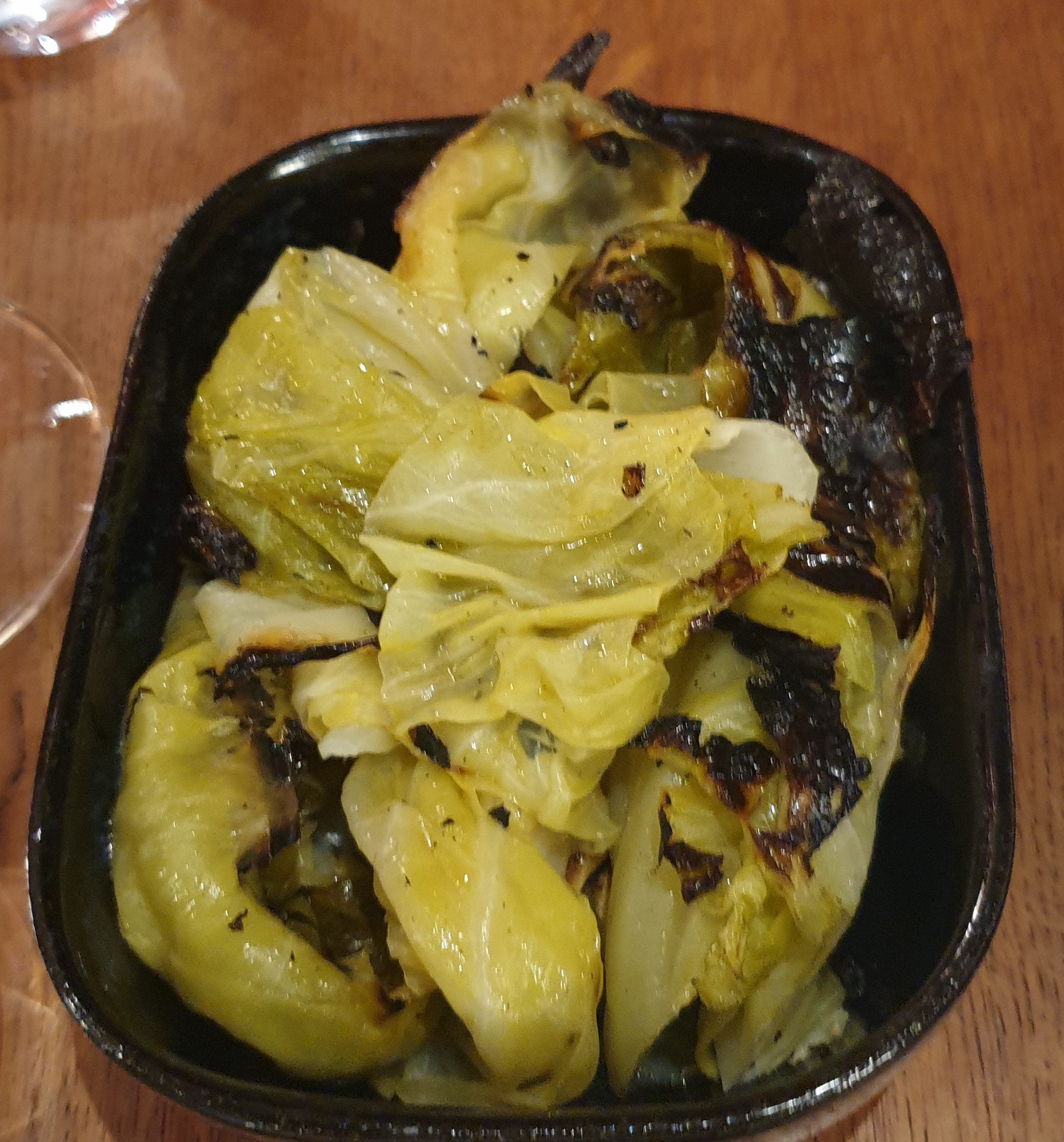 Very subtle application of the lemon oil, which I tend to find can overpower if applied too extravagantly. This complimented the cabbage rather than dominated it

The skinny fries, were fine examples of their kind,

and were great loaded up with a good blob of the heady truffle infused mayonnaise.

Together all of this made for a cracking couple of mains, with the lamb and the mac ‘n’ cheese the stars of a rather fine show.

Some excellent sounding desserts on the pud. menu, brought an inability to make a choice on J and my parts. We decided again to share, but couldn’t agree between the peanut parfait and the muscovado tart (me – parfait, J –  the tart 😀 – I may pay dearly for that gag). 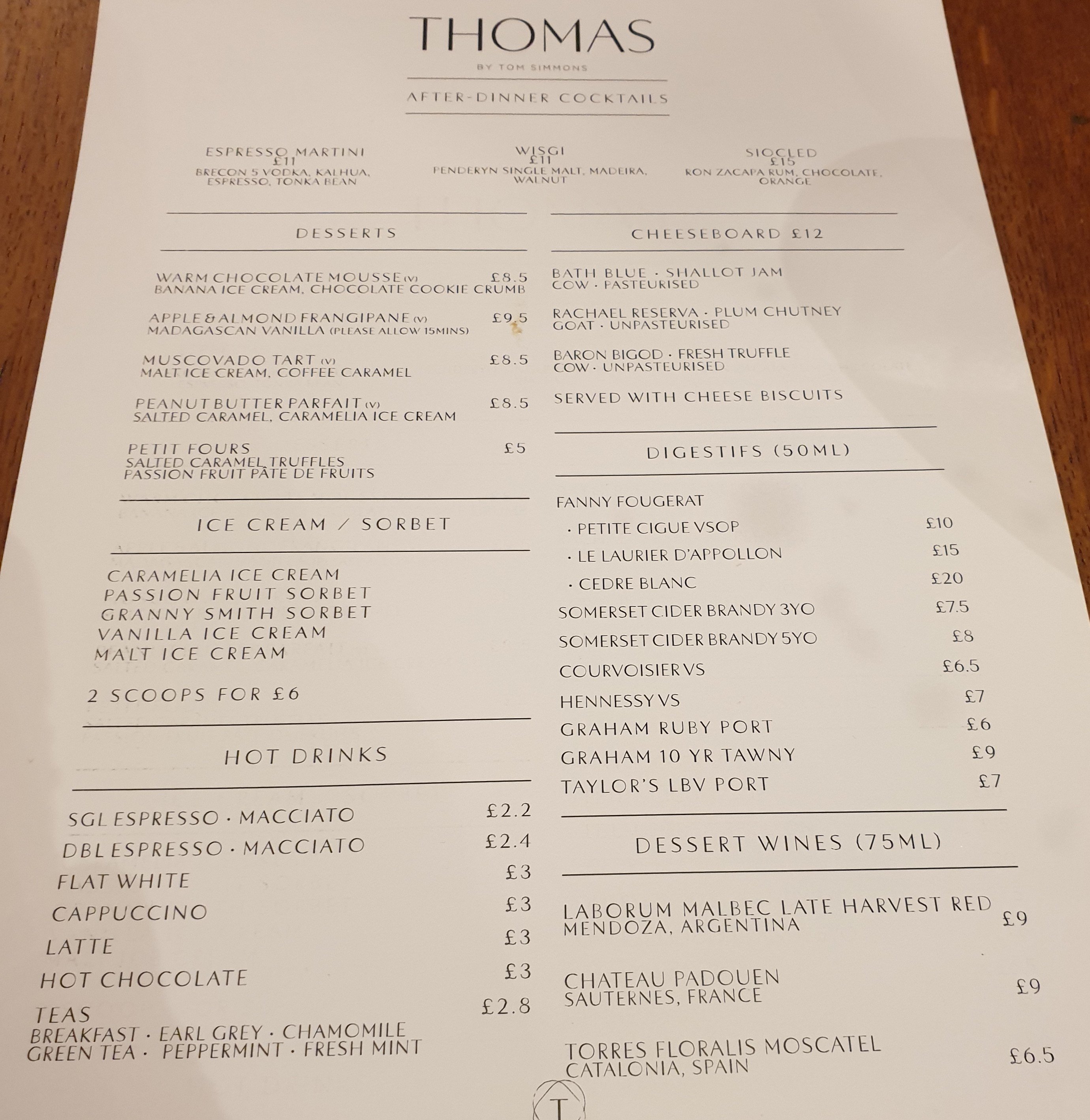 After much discussion, we went off on a tangent and plumped for the cheeseboard (£12). 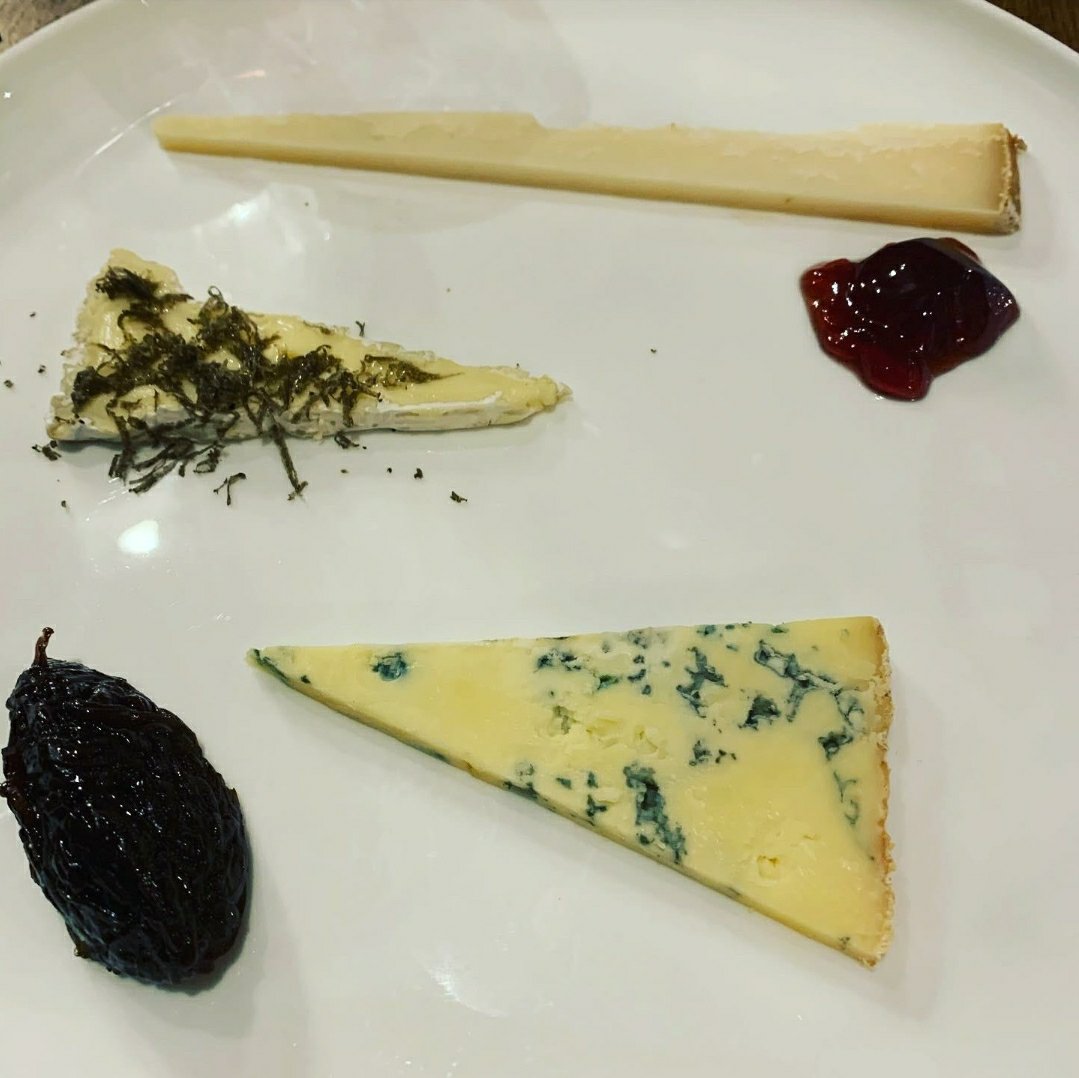 I liked the fact the each came with its own condiment, plum chutney with the Rachael, shallot jam with the Bath Blue and yet more decadent truffle with the Baron Bigod. I love Baron Bigod, but the addition of a good grating of truffle took it to next level lovely.

Nice to see they didn’t skimp too much on the biccies, 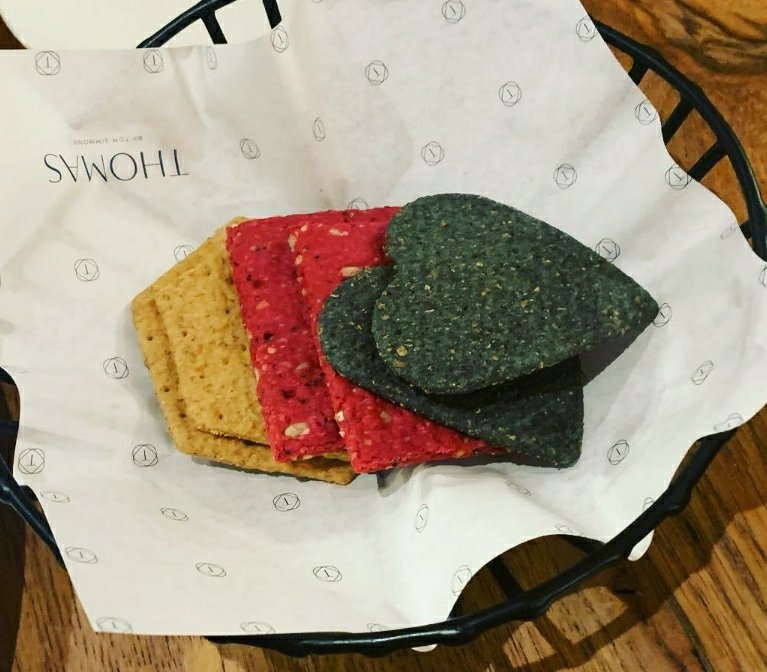 which were rather fine in both  appearance and flavour.

We were both rather well sated following this lot.

On the booze front, I of course defaulted straight to the wine list, but there are plenty of options if wine (you mad people) is not your bag.

Apologies for the poor photo, but in the cocktails was the interestingly titled ” Moron”. For those unfamiliar with the Welsh language this is Welsh for carrot.

Would have made a change for J to say “I’ll have the moron” rather than the usual when out with me of “the moron is with me” – particularly as I enthusiastically greeted someone who she knew in the restaurant, with her then asking me how I knew them and (on getting my response) informing me they weren’t who I thought they were 😬.

As well as beer and cocktails, there are plenty of spirits on offer. 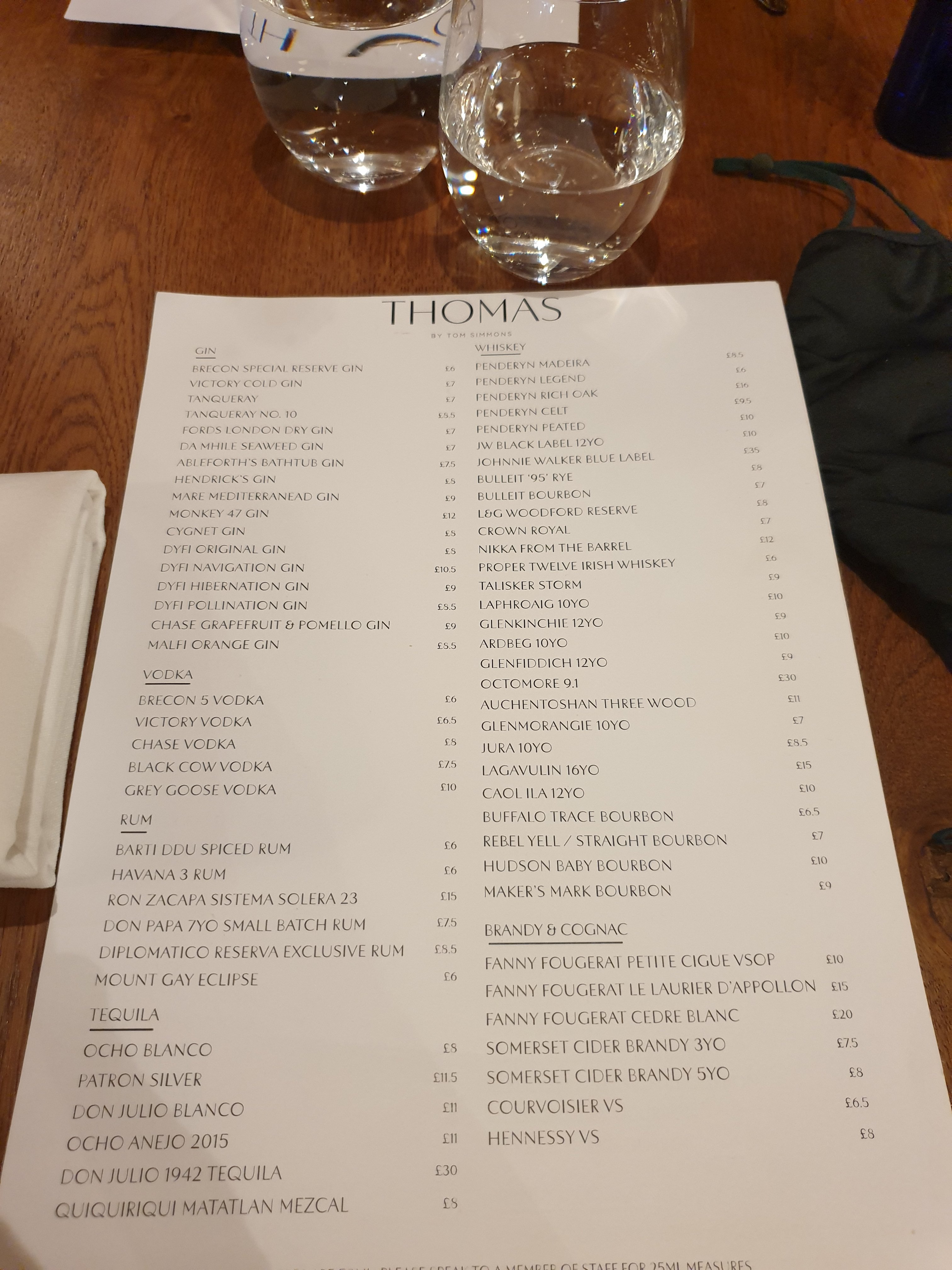 In terms of the wine list, if I am honest it didn’t really get my pulse exactly racing. Nothing fundimentally wrong with it, just not that exciting (I would bet my house on being able to identify who supplies their wine by just looking at this list – again nothing wrong with that, but makes the list a tad predictable at least on the reds and roses) to a wine geek like me. 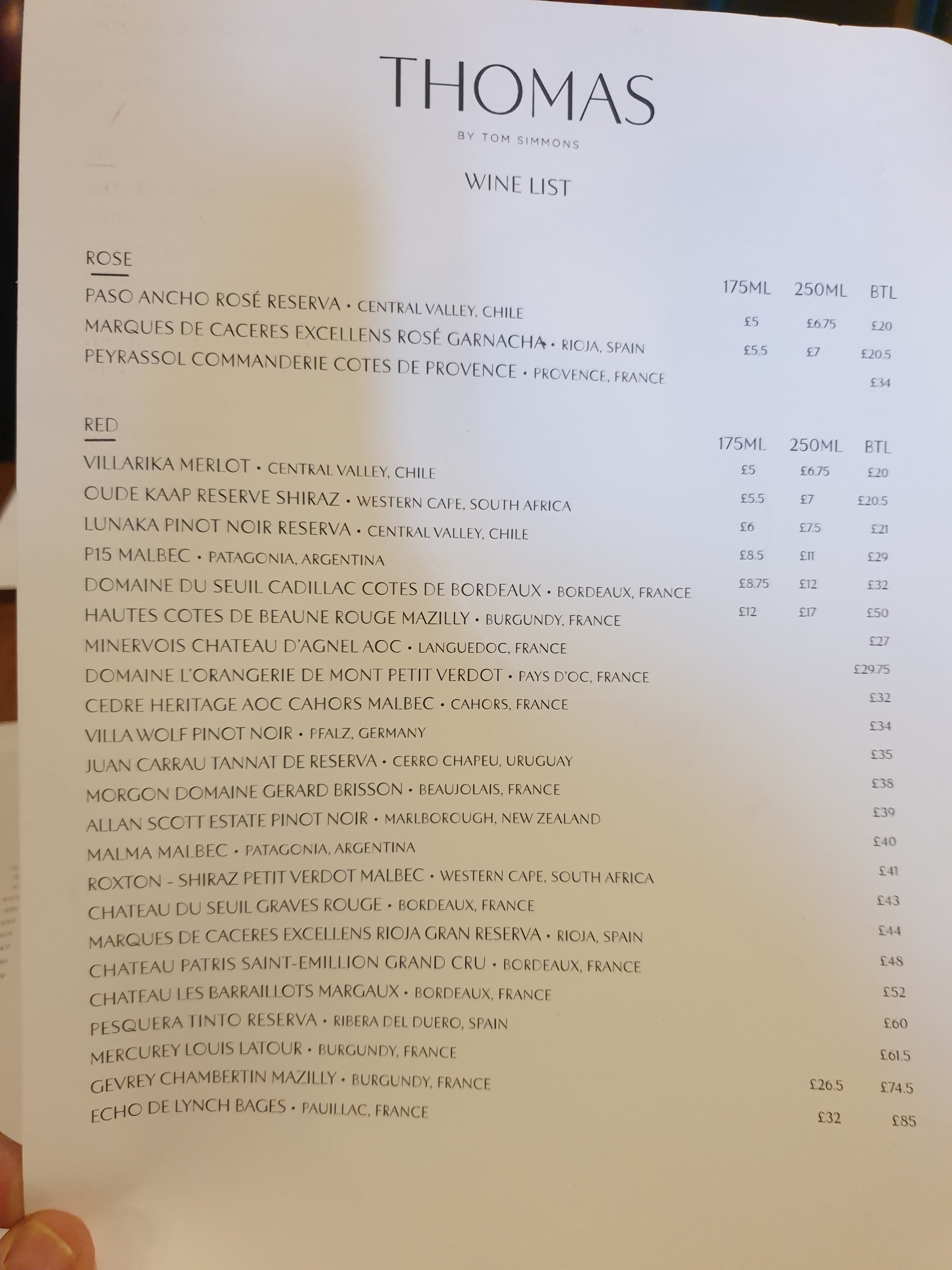 I must say I do find it frustrating when a wine list doesn’t detail vintages at least for the pricier end of the list – there are good ones and bad years and some wines need longer than others to enter their drinking window (or indeed exit it). For these reasons, I like to know in advance rather than have to ask the waiting staff.

After a bit of toing and froing, I went for a Saffer number in the form of the Roxton by Brampton (a Stellenbosch winery) 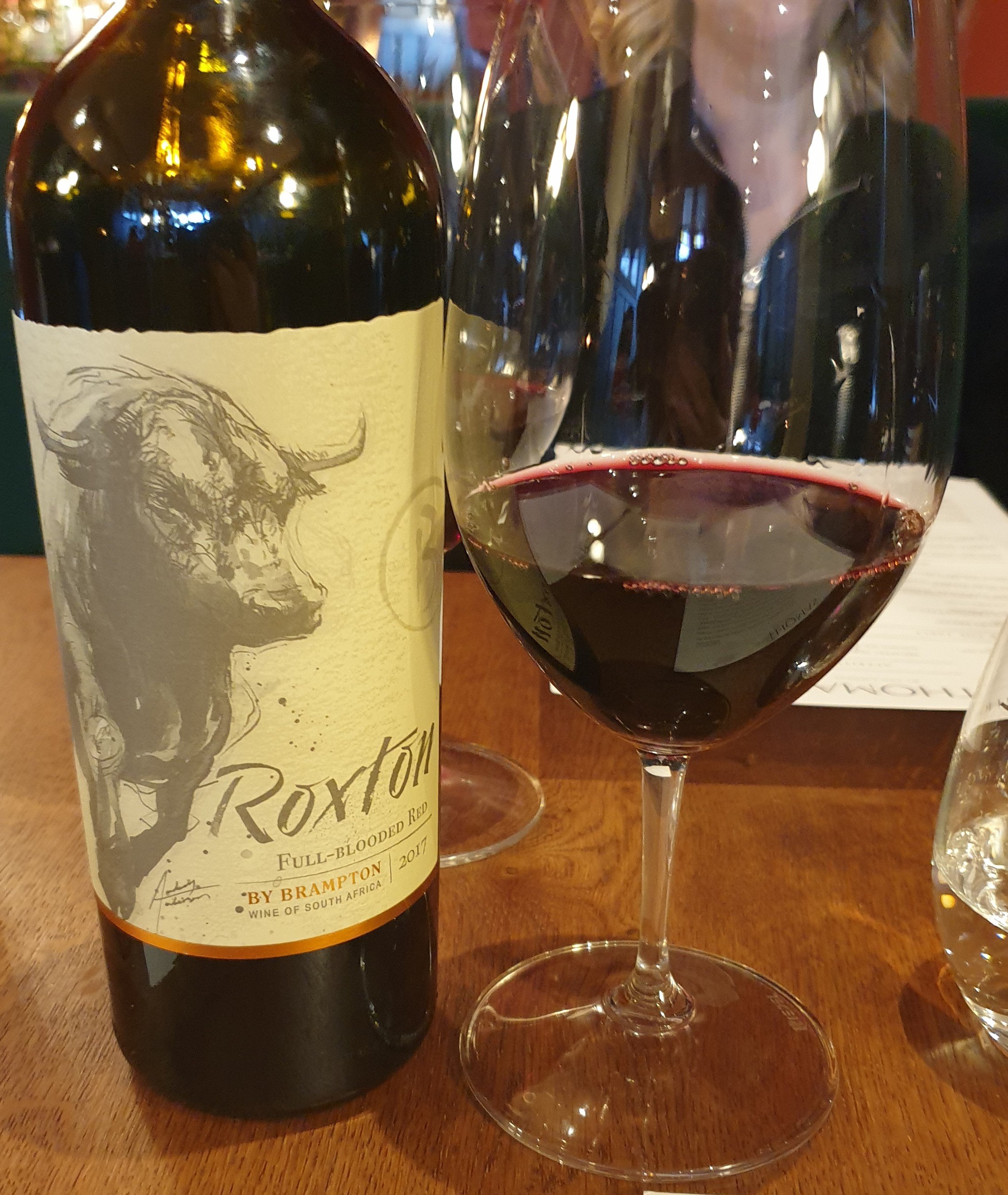 A blend of shiraz, petit verdot and malbec, this was £41 (retails at about £15 –  so not too hideous a mark up) and no shrinking violet. Bags of dark fruit (black cherries) and chocolate, followed by plenty of spice in the mix.

It worked particularly well with the lamb.

With the cheese, I had run out of wine and fancied a dessert wine

I was tempted by the Torres number, which I know and like, but decided on the late harvest malbec (£9 for 75ml).

Quite enjoyed this, with spice on the nose as well as chocolate and dried fruit. Not too sweet on the palate, with ripe fruit and nicely intergrated tannins.

On seeing the glass it arrived in J couldn’t hide a snigger, knowing what my reaction would be (I hate dinky wine glasses).

After rolling my eyes repeatedly,  I immediately decanted it into a proper wine glass.

Glass aside, this wine was a nice way to end a very enjoyable meal. Bit pricey at £9 for a 75cl pour (which equates to £90 for a 75cl bottle, with it seemingly retailing at around the £20 mark) mind.

Both J and I immensely enjoyed our “last supper/lunch” before prohibition kicked in.

This place isn’t cheap, with the sides (which are definitely needed, even if you aren’t pigs like J and I) bopping up the price, making it very much a top end joint price wise in Cardiff.  I am, however, happy to pay when it is quality gear and the cooking here is excellent. The mushroom croquettes, the lamb and the mac ‘n’ cheese (oh dear Lord that mac ‘n’ cheese) will all live long in the memory.

If I had one criticism, it would be that food this good deserves a more flamboyant wine list. It is a touch predictable and not up there in terms of the wow factor that the food offers.  Not a single Italian red (such good food wines) on the list just seems odd to me.  A better wine list would certainly take this place up another notch to my wine focused mind.

Covid 19 rules were all properly observed and it was nice to see a hand sanitiser from a Welsh gin producer on each table (very nice, but I couldn’t drink a whole bottle 🙄).

It is just such a shame they are being forced into hibernation for the foreseeable.

Would I go back? Absolutely – really enjoyable the meal, with some fabulous dishes.

I will definitely pop in for their fixed price lunch when they are back open.

They are currently selling voucher online, which are definitely worth a punt for some post Yuletide (or at this rate Easter) cheer. No takeaway offering this side of Christmas, but who knows what the New Year will bring (probably a rather large asteriod at this rate).