Persian pick me up – Taste of Persia

Following a fabulous “Cook at home” feast from Leyli Joon & Co. at the beginning of lockdown, I have developed quite a taste for Persian food.

As a result an instagram post from Taste of Persia (a Monmouth based outfit) piqued my interest, with some rather interesting sounding dishes on the posted menu.

All sounded rather fine and being lazy I decided to go for a bit of everything.

This entailed ordering the family feast for Mrs. SF and I and I rationalised this on basis that there would be left overs for the next day 🙄.

Pick up was a somewhat candistine affair, with a meet arranged by phone (was it tapped – should I have used a phone box so it couldn’t be traced😬) and the goodies transferred from car to car at a secret location!

All felt rather James Bond- esque with 007’s Aston Martin replaced by my ageing Volvo estate (similar price – give or take the odd £220k). 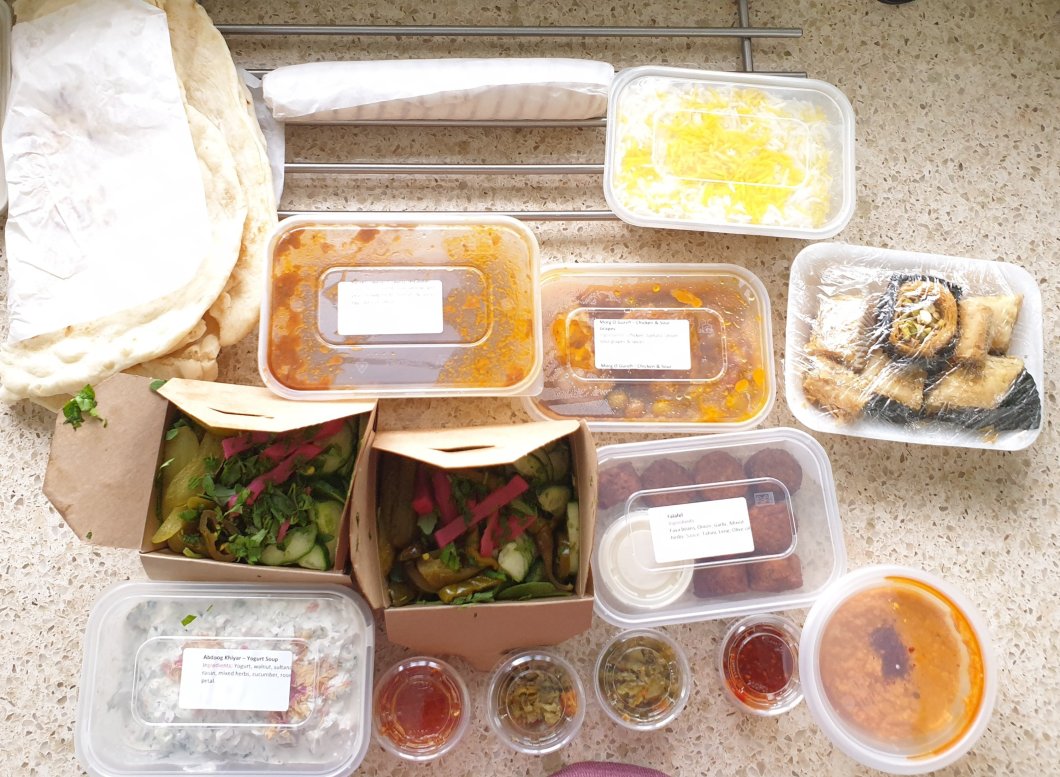 Unpacking it all made for a very nice looking haul, with a mix of breads and side dishes to compliment the two meat based mains.

Simple reheat instructions were in the bag.

First up was a pot of hummus, which had a nice lick of smoke to it.

Great as a dip with the flatbread/naan), I also added it (in hindsight I think that was the idea all along) as part of an assembled wrap and falafel combo, with chilli sauce, tahini and salad. 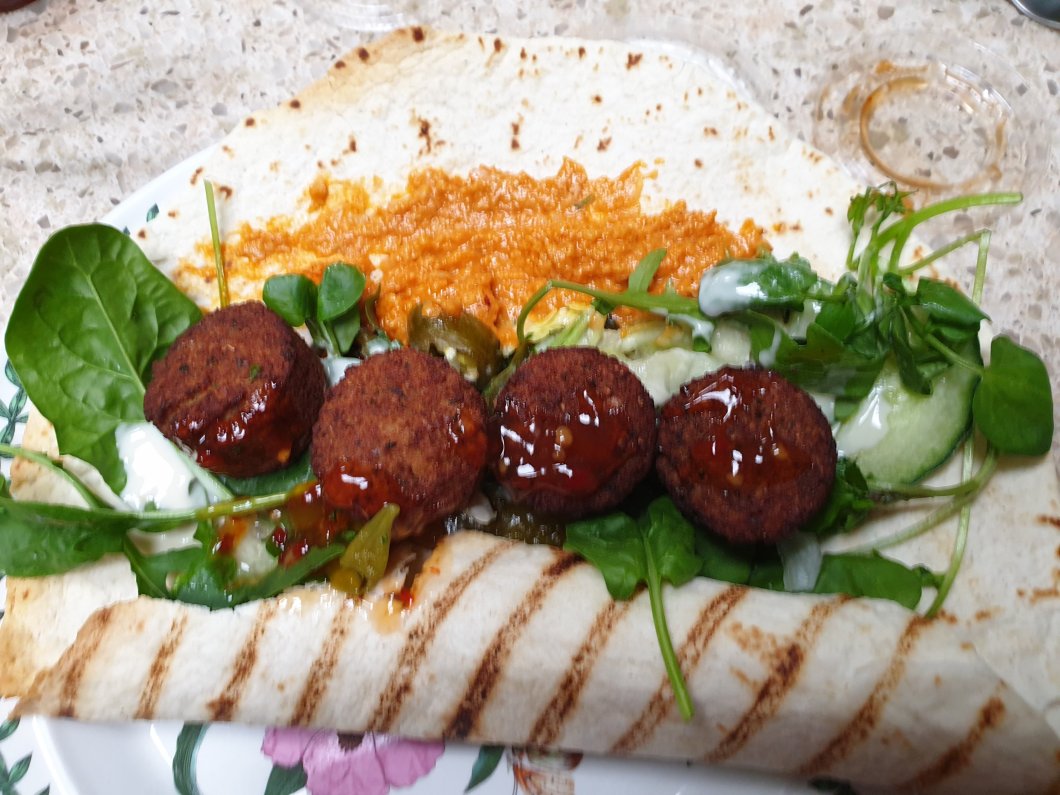 Nice light texture to the falafal (they can be ice hockey puck dense if done badly), with a crisp (non oily) exterior and a light and fluffy interior. They had good flavour to them, with a pleasing level of spicing complimenting the nuttiness of the chickpeas.

With all the accoutrements, these were a rather fine start to proceedings. 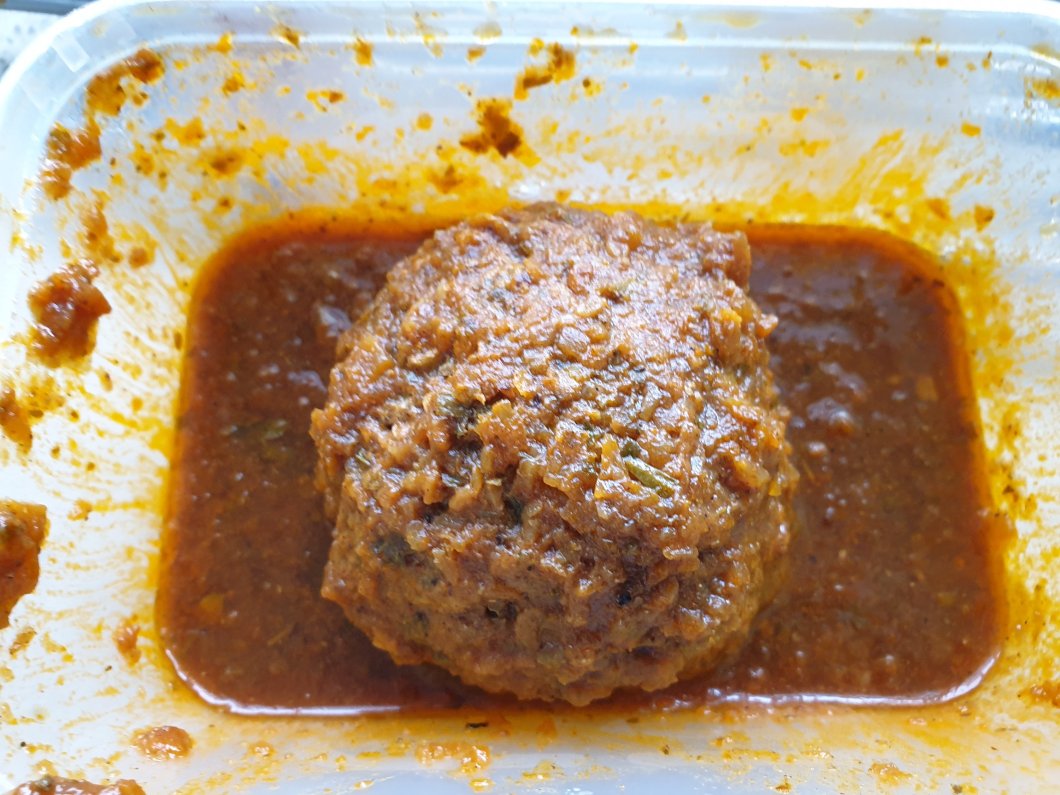 The meat surround included rice and split peas, which operated to lighten the mixture, so it wasn’t dense at all.

It came with a tomato sauce (in which you dunked the flat bread/naan – no rice for this bar from that in the meatball surround), which had a slight bitterness to it that worked quite well as againt the sweetness of fruit in the meatball.

This came with two pots of robustly flavoured pickles, a big element of which seems to be preserved lemons. Mrs. SF found these a bit too salty for her tastes, but I loved the salty sourness of it.

I was more enamoured with this dish than Mrs. SF who wasn’t sold on the tomato sauce or the pickle.

Very tender and meaty chicken thighs (so much more flavour than breast) sat in slightly sweet tomato sauce (in contrast to the slightly bitter one that came with the Kufteh).

What made the dish for me were the sour grapes that brought a really nice sharpness as against the sweetness of the tomato sauce.

Nice rice (saffron) with this, although I thought it was a bit light on the saffron.

The last savoury dish (I was too full to eat this on the same day, so saved it for lunch the next day) was a yoghurt soup (not really that soupy, at first blush, in character or consistency (more Russian salad in texture I thought).

Nice combination of sweet from the raisins, sour from the yoghurt and bitterness from the walnuts, with refreshing cucumber and the added fragance of rose petal and herbs.

Really good with some of the pickle heavy salad. 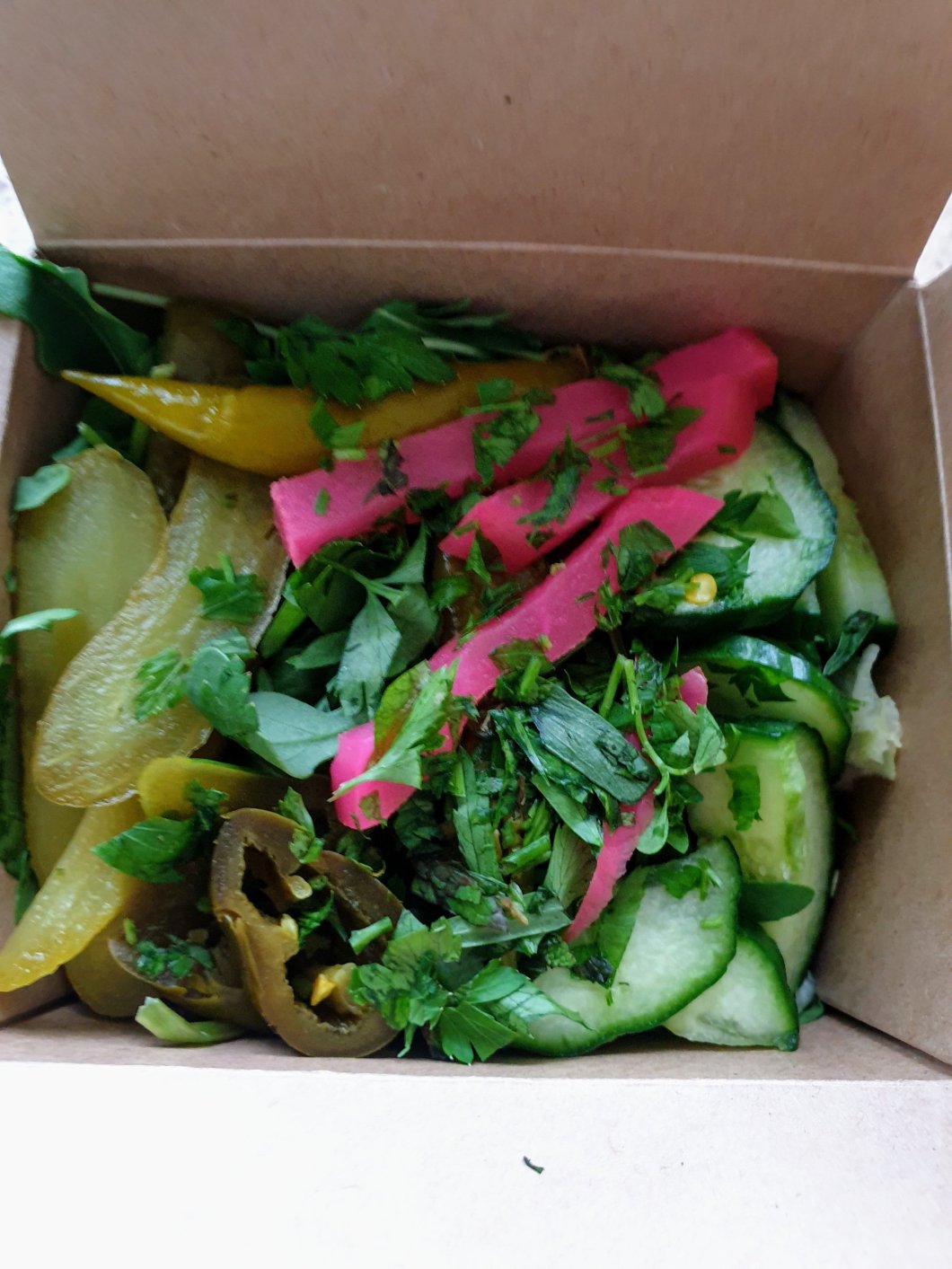 Whilst we didn’t order them they added a selection of baklaava to our bag of stuff. 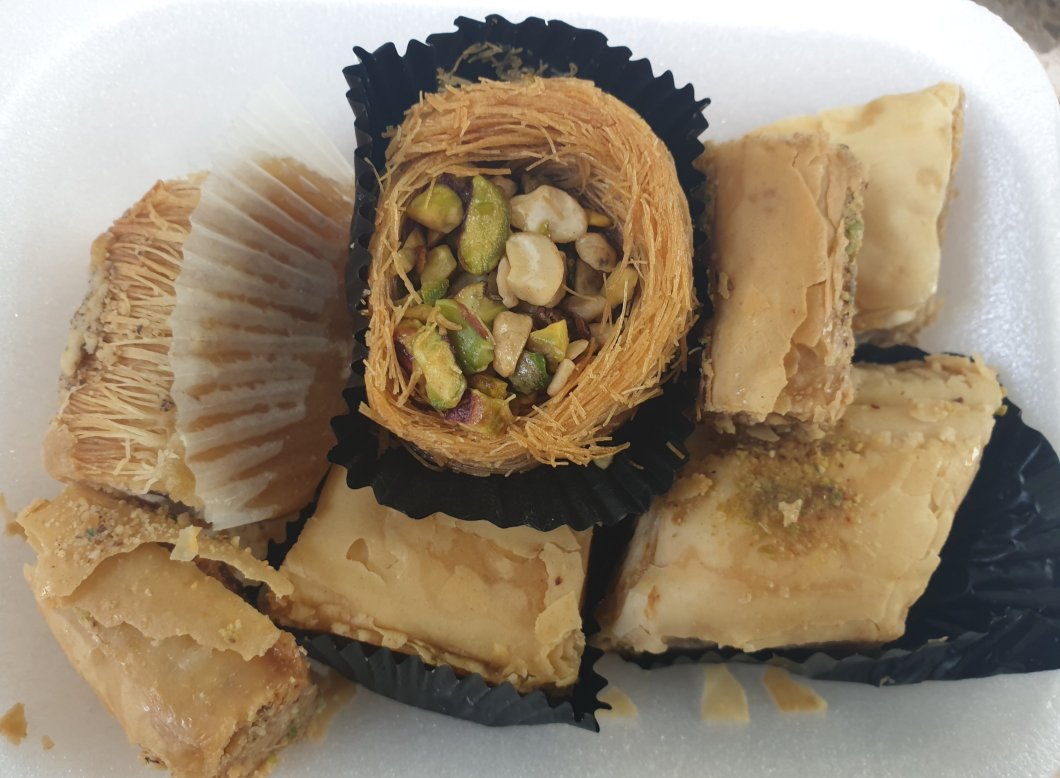 Lovely and sticky with lots of pistachio – probably loaded with a billion calories.

Ultra sweet, but in a non – cloying way.

With such a divere menu pairing was a bit tricky. I toyed with a white wine (a riesling or a grüner veltliner were my thoughts), but decided that with this sort of cuisine something from the Middle East would be interesting.

I had picked up a Lebanese wine from the Bottle Shop in Cardiff at the start of lockdown and thought I would give it a go with this food (not a million miles away from Lebanese food I – probably wildly and insultingly incorrectly – mused.

Lovely colour to this wine,

with dark cherry, herbal notes, cracked black pepper spice and tobacco on the nose and palate.

As a blend of grenache, syrah and mouvredre it had more than a touch of the Rhone about it.

Nicely integrated tannins made it an easy drinking number, with it drinking very well now. I do think it would benefit from cellaring for a few more years though.

The grenache heavy blend (with mouvredre and syrah in the mix) worked well with the spice in the dishes and I enjoyed this wine with the food and on its own afterwards.

I would definately buy this wine again – really nice drop.

An alternative that I think would work well with this food would be (you already know what I am going to say don’t you) a sherry.

I would say a palo cortado would be a rather interesting pairing with this sort of quite highly flavoured food. 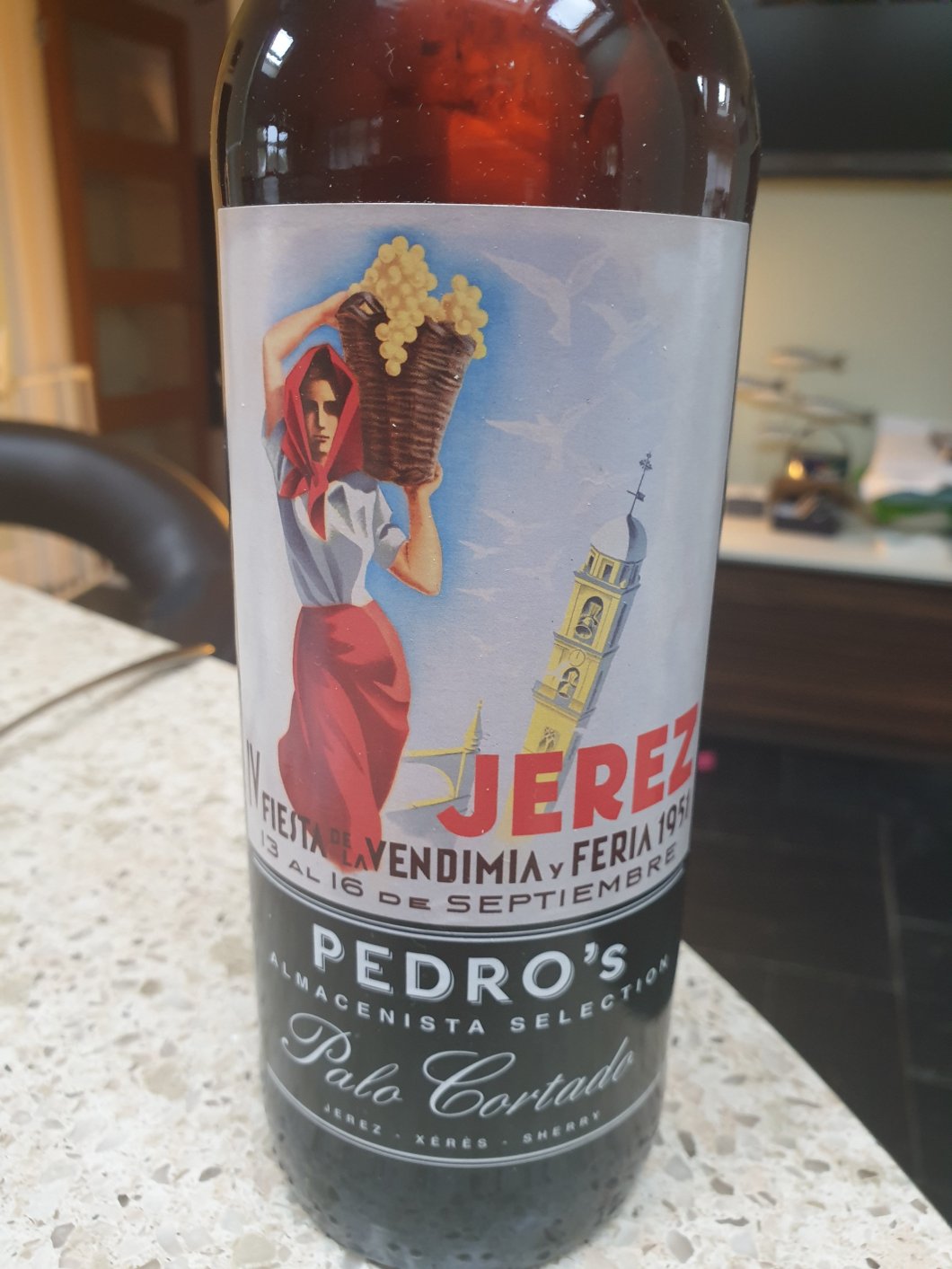 This one, which I picked up from the deli side of Curado Bar a while back, would work well I reckon.

I rather enjoyed my Taste of Persia takeaway, which provided for something a bit different from the takeway norm.

For the quality and quantity of good provided I think the price was pretty good value.

Would I order again? Yes – different but in a nice way I thought.

Menus change each week – this is last weeks menu.

Menus for weekend (Friday and Saturday delivery) are published on instagram (usually on the Monday, with orders having to be in by 8pm on the Wednesday).

Details of the ordering and payment process are in picture below. 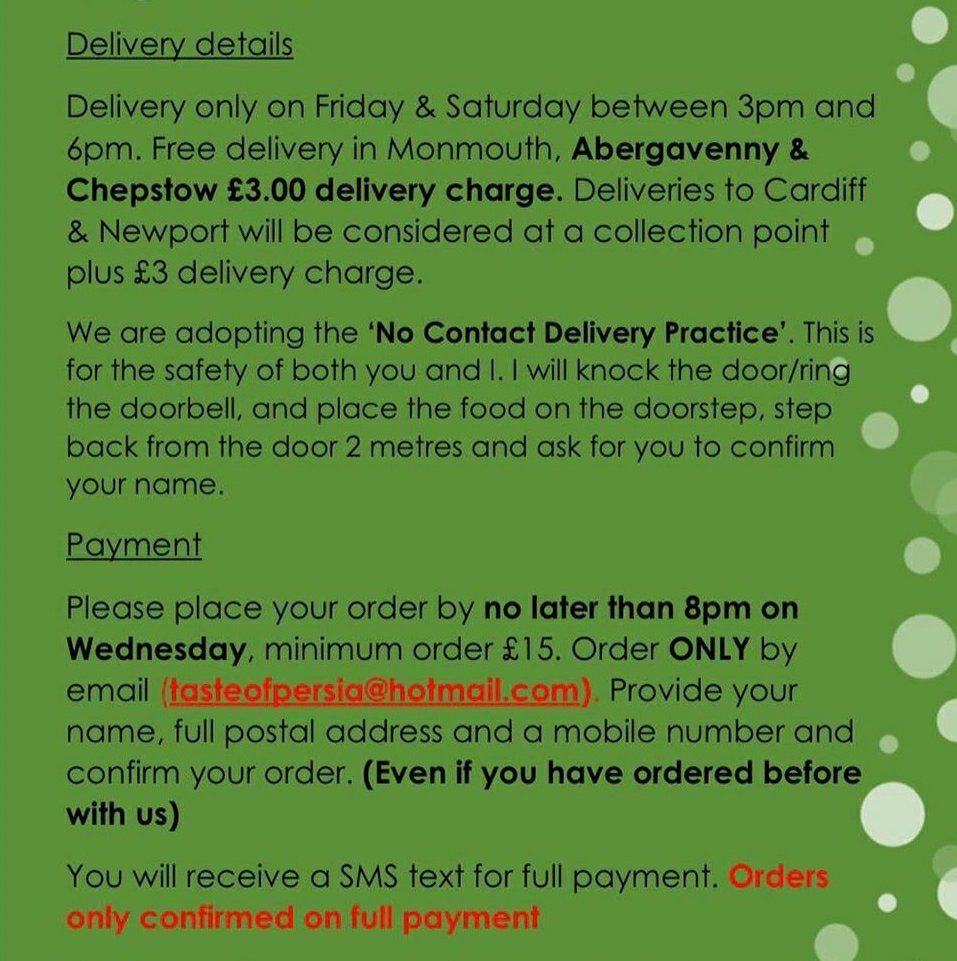 For Cardiff order, you have to pick up but can arrange a waypoint to do so.