Tea for two and a tale of two teas – Click and collection cream tea from Cocorico Patisserie, Cardiff (CLOSED: 2020)

I am not a huge consumer of afternoon tea, as have always thought it a slightly old fashion and oddly timed meal (doesn’t really fits in to the working day and at weekends I tend to eat lunch later in the afternoon).

It reminds me of my long departed granny (one was always known as granny, the other as grandma – no idea why), who was a stickler for things being done properly (tricky as I was a bit of a brat of a child, with an attention span that a goldfish would be ashamed of).

When we visited her it seemed to always involve afternoon tea. Then I always thought it odd and could never (as a child) fathom the allure of cucumber sandwiches (precisely made here with the crust always trimmed off) – ham and mustard was more my style (she did them too, always with English mustard, never french) and darjeeling tea (always strained leaf).

She was one from a bygone age (born before the start of the 20th century whilst Queen Victoria was still on the throne – boy the changes she must have in her life time) and to a child the formality she brought from that age was somewhat bewildering.

I suppose you often rebel against what is the norm when you are a child and if truth be told I was a difficult child and rebelling (otherwise known as being a right royal pain in the arse) was my default setting.

Memories are of me being required to sit still and behave myself (always a problem as I was a massive fidgit and not very well behaved – somethings never change), whilst eating dainties and drinking darjeeling tea, in hindsight were rather cherished, but at that time it all felt like I was in a straight jacket.

At these times I was always thinking of running wild through Ashdown Forest (of Winnie the Pooh fame) which my Granny’s house backed onto.This (in my usual long winded way) means afternoon tea was never somethings I yearned after when I finally grew up (February last year – Mrs. SF questions this date). 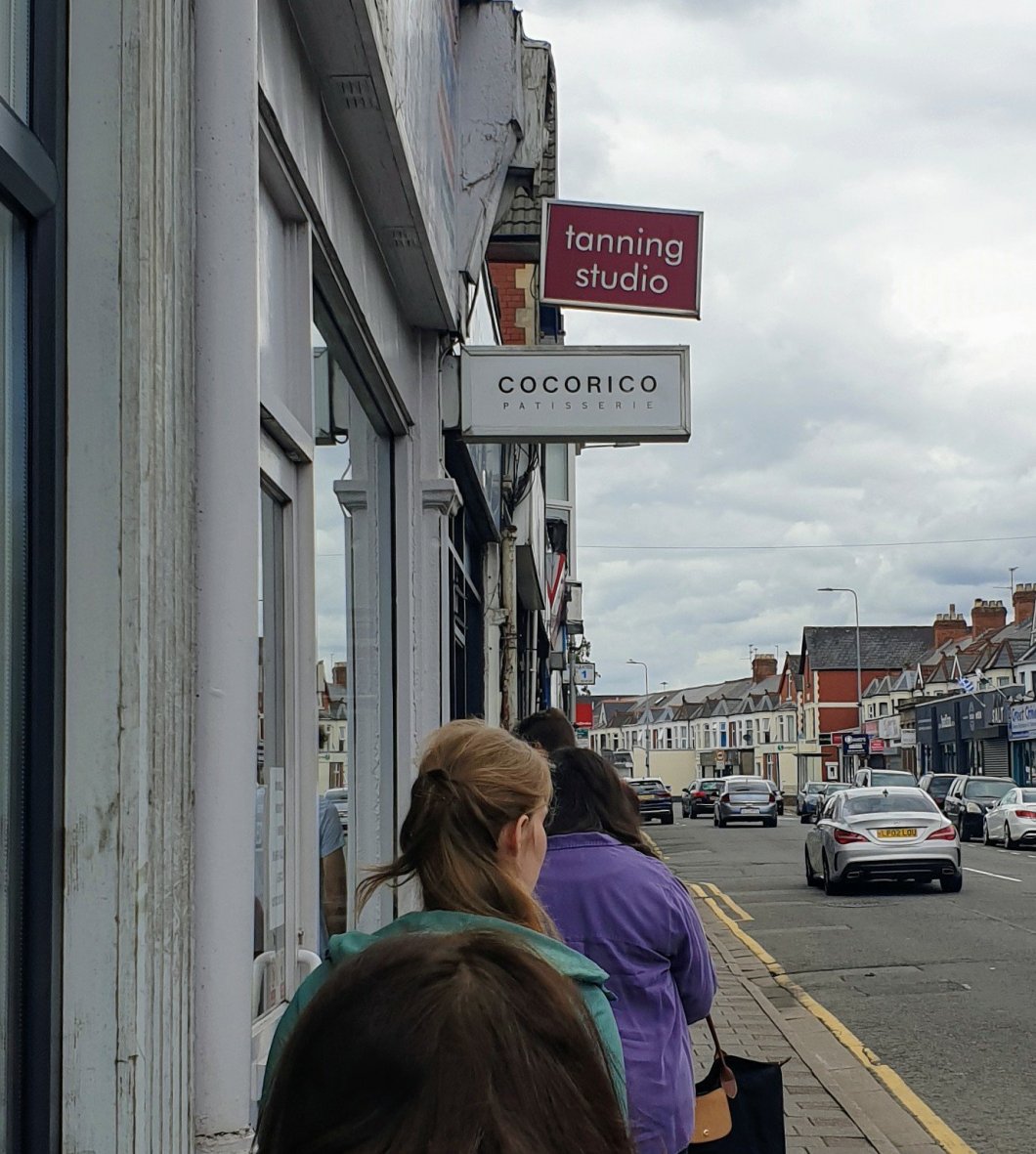 The queue (due to social distancing requirements) was for Cocorico (think they have a queue normally) and it was a lockdown treat after I had heard many a good report, not least from J who encouraged me to give their afternoon tea a go. 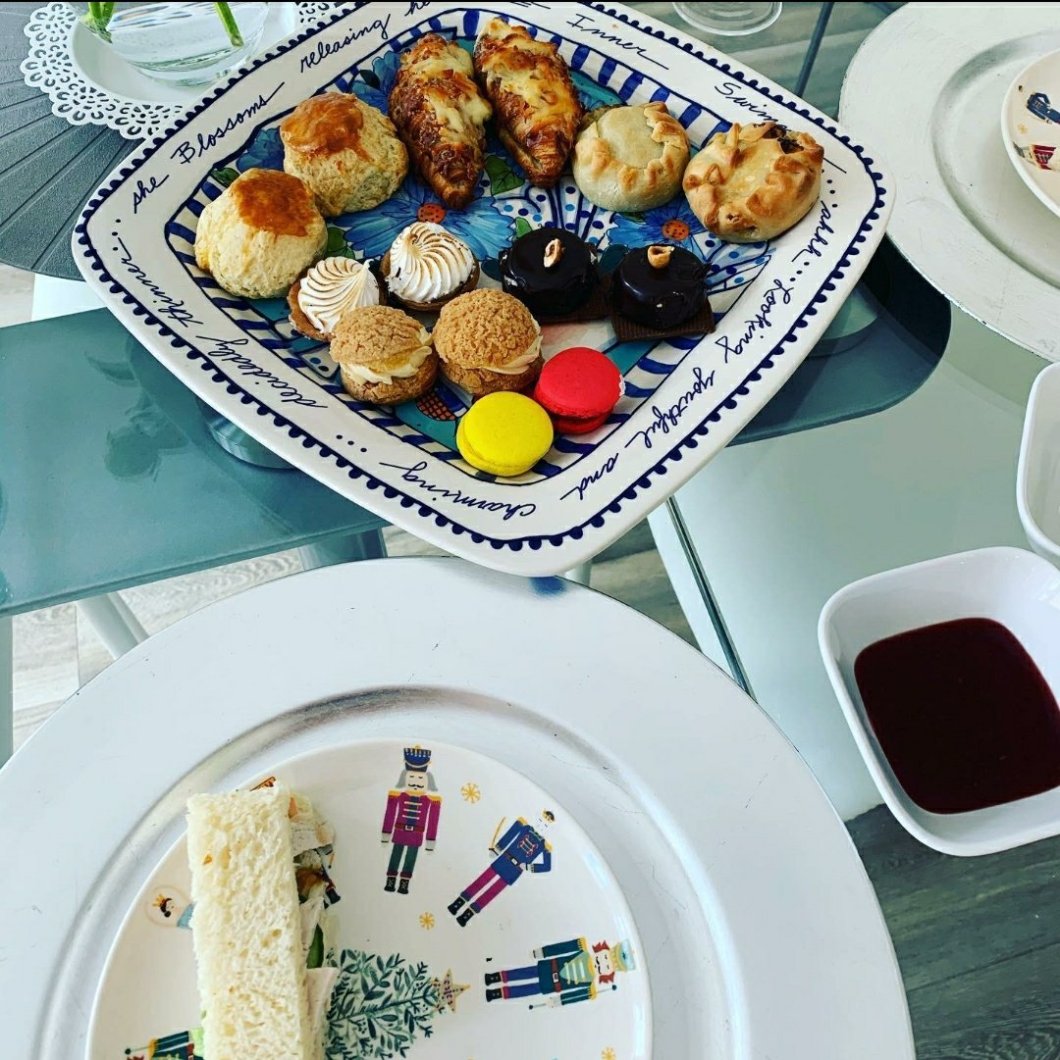 Picture courtesy of Jemma ThomasCocorico have also featured positively on Channel 4’s Bake off the Professional, (runners up in a previous series and light years ahead of the competition on the basis of their first showing in this current series) which must have the most demanding judges of any reality show in the form of Cherish and Benoit.

Brutal those two – god I would hate to have my annual appraisal done by either of them!!

I like an occasional lockdown treat and something from Cocorico seemed a good idea to break up the monotony of not going out, with something I don’t normally eat – hence my place in the queue for a click and collect afternoon tea.

I had paid in advance and the social distancing measures here worked quite well, with only two allowed in the shop at any given time. The queue went down surprisingly quickly and it seems they had been busy judging by what was left for walk ins at around 12.30. 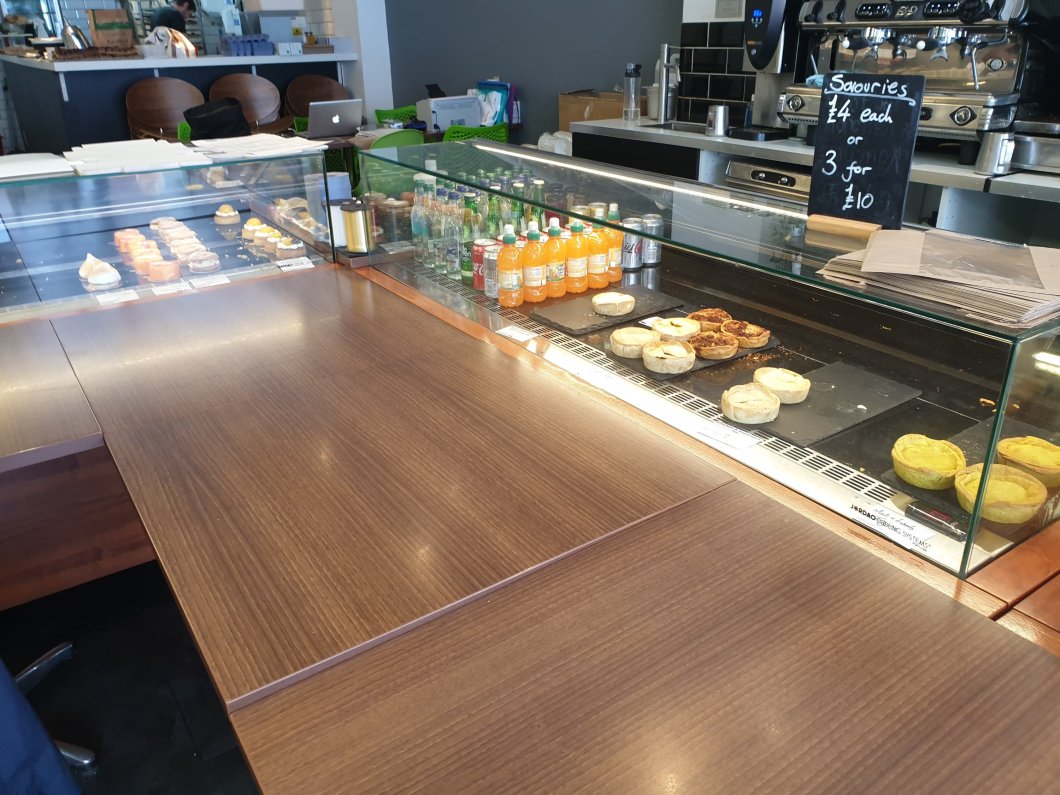 My order was packed up nicely in two separate boxes, one of which contained the sweet stuff 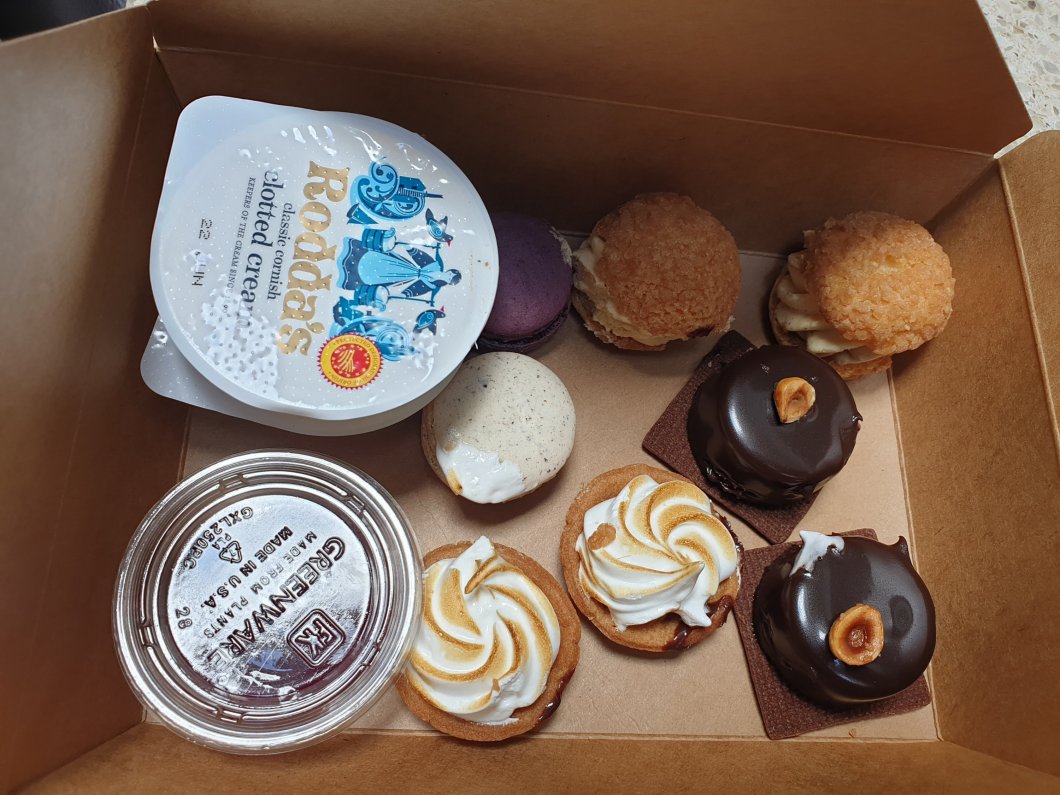 and the other the savoury items. 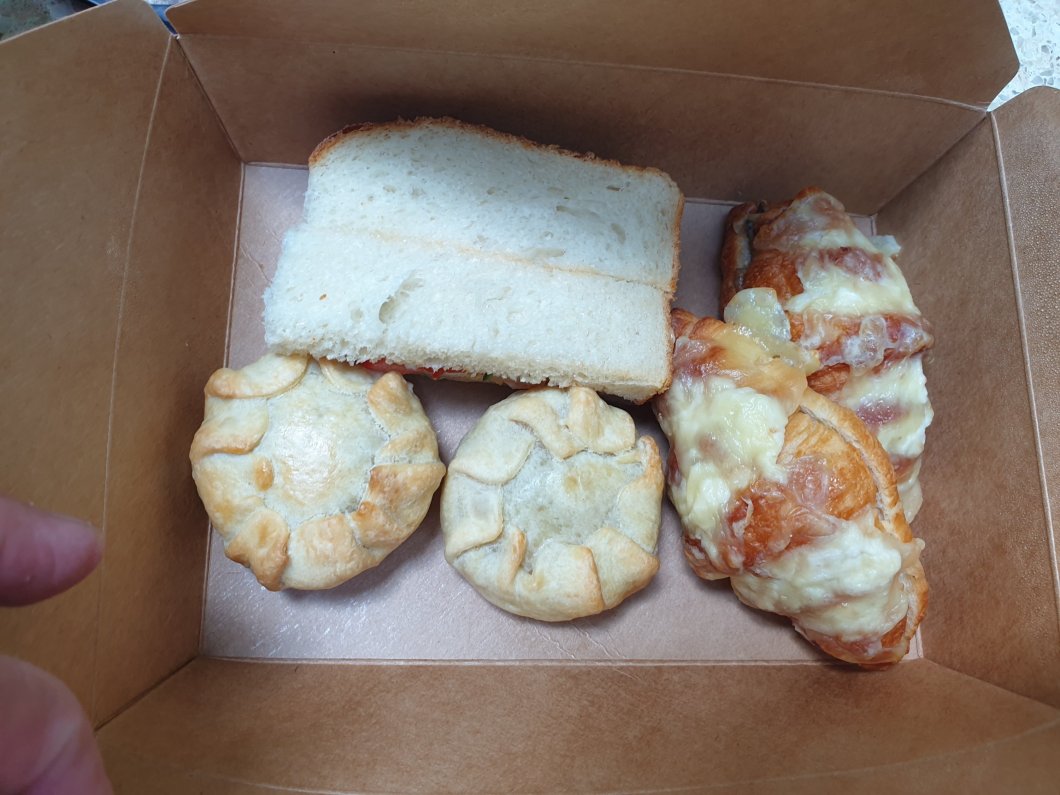 In addition, there were some bagged up scones. 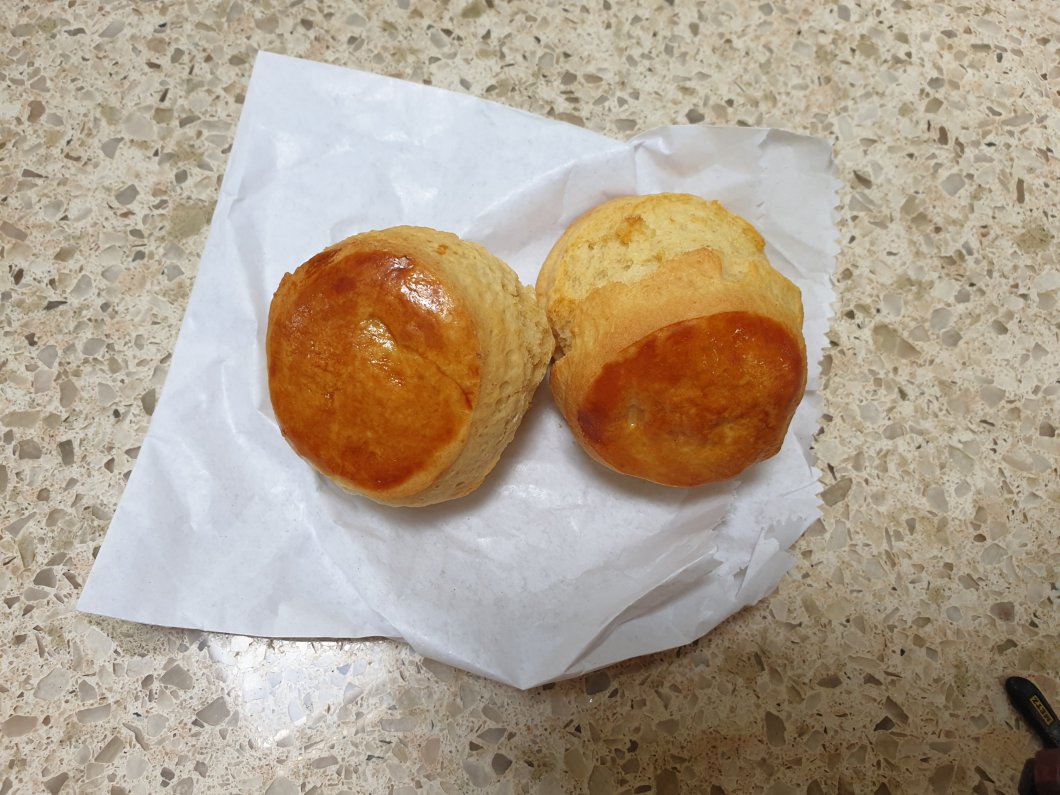 As the title suggest it was very much a tale of two teas in terms of the savoury and sweet items.

The smoked chicken mayo and salad finger sandwiches were disappointing. 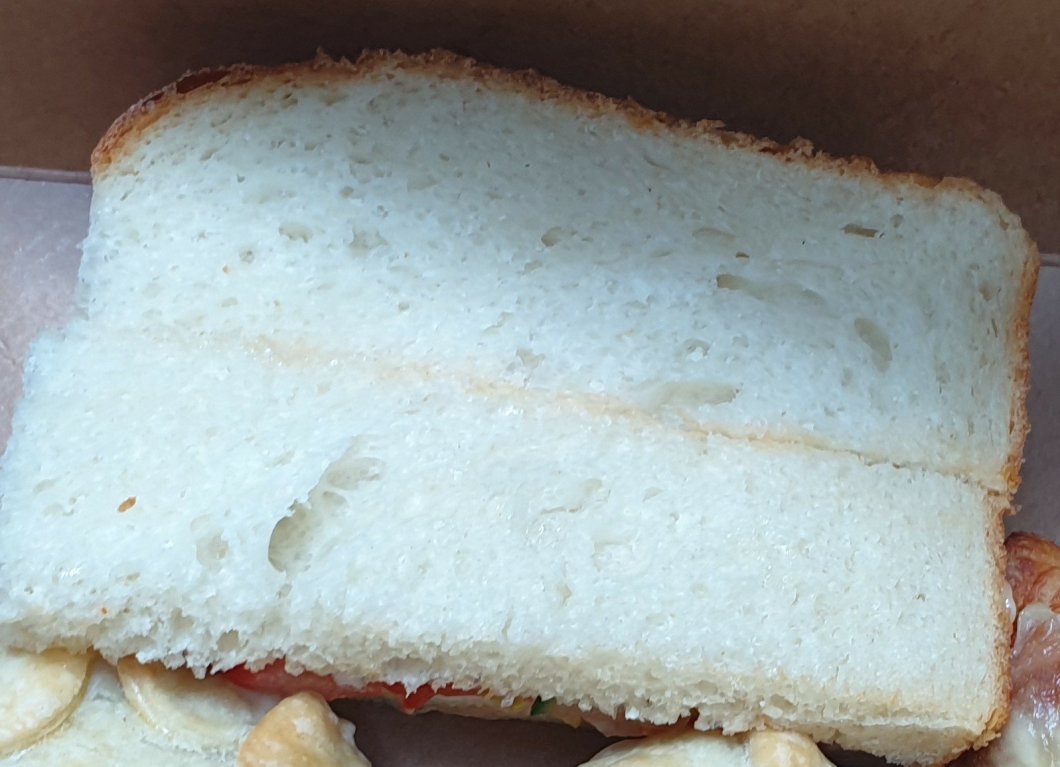 Crust still on (including an end piece – I can imagining my granny, Cherish and Benoit tutting), there was pretty minimal filling in these. The crust end was particularly lacking in filling and should have been discarded rather than included in my opinion. 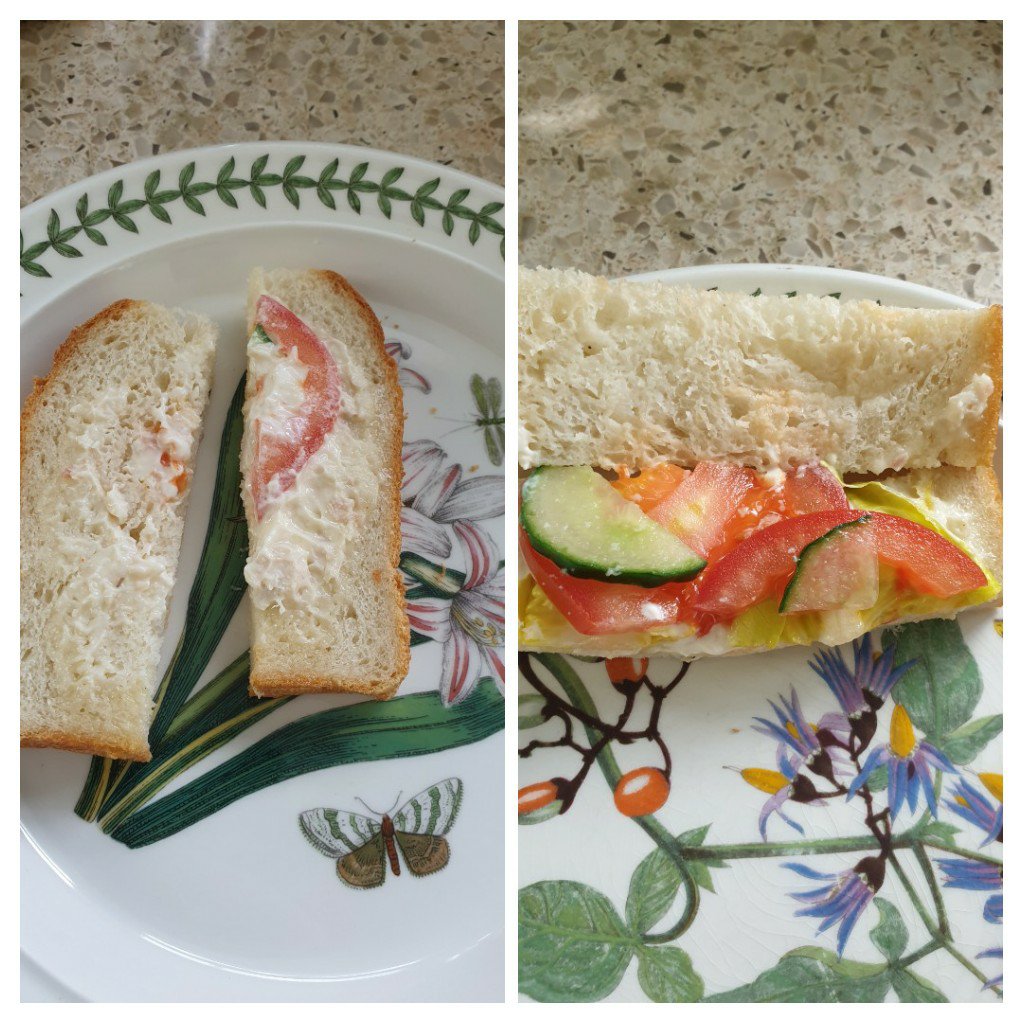 Whilst the filling was actually very nice (quite a punchy smokiness to chicken mayo and nicely fresh salad items) there simply wasn’t enough of it (actually no chicken at all in the crust end bit).

A goats cheese and caramelised onion savoury croissant was much more like it with a very decent level of well flavoured filling and a nice light cheese coated exterior. 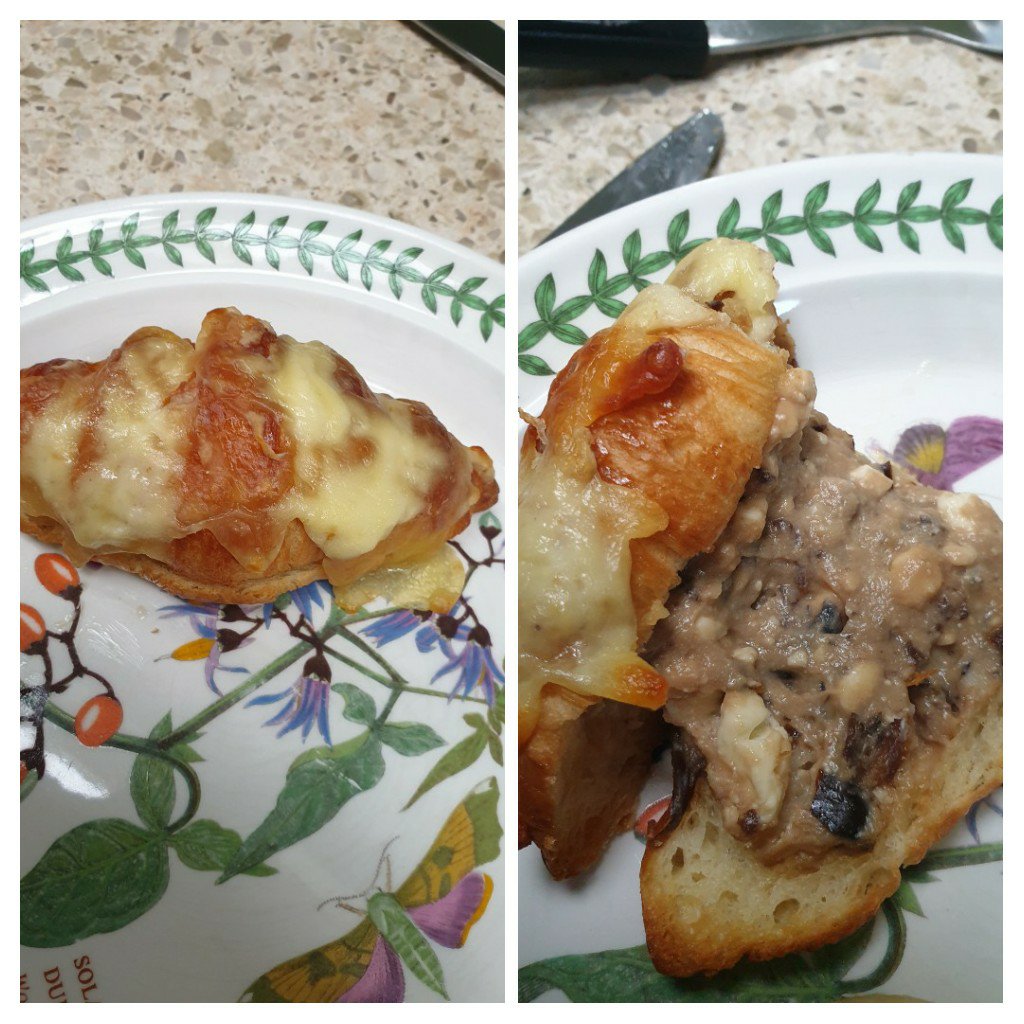 The filling issue resurfaced with my savoury pie. I believe it was a chicken, asparagus and potato number, 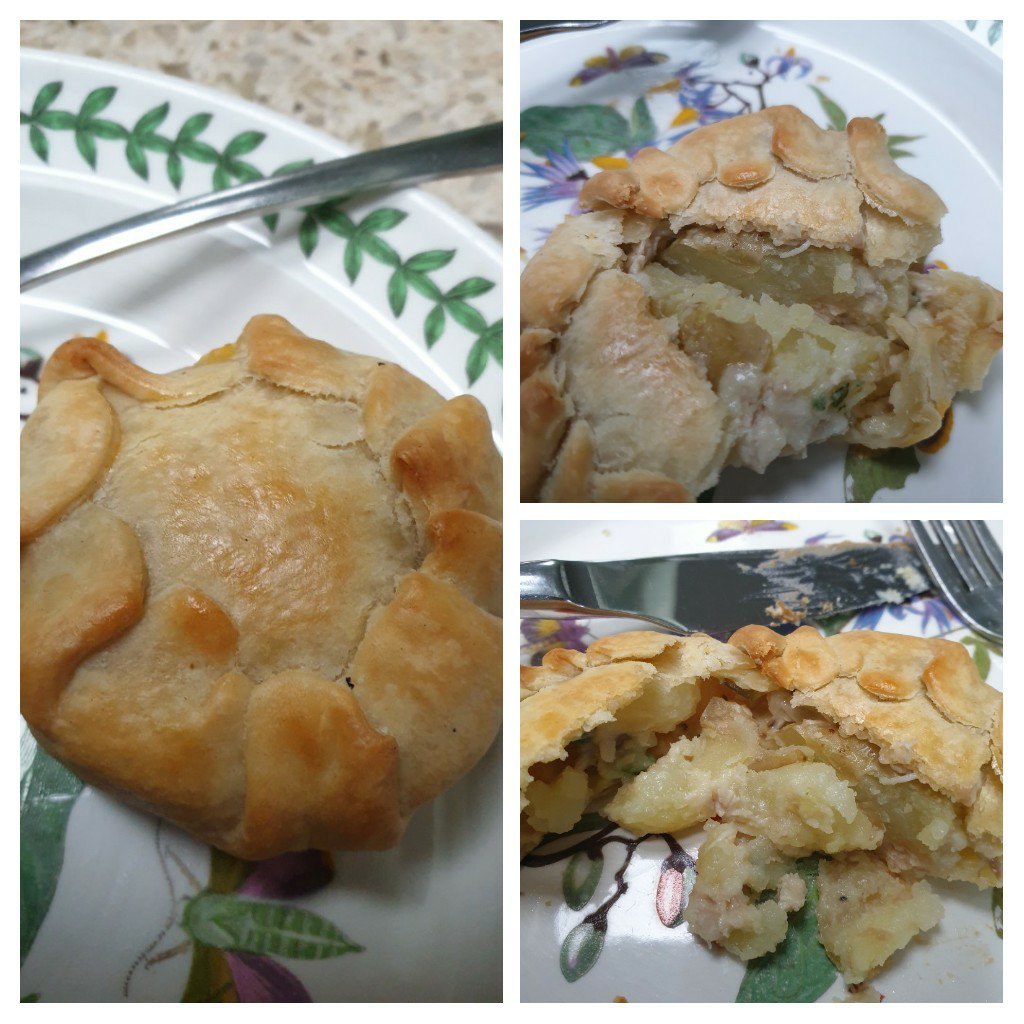 but I only knew this from Mrs. SF’s pie as mine (pictured above) was almost exclusively potato and had only very minimal amounts of chicken or asparagus in it.

I actually thought the pie only had a potato filling until I saw the interior of Mrs. SF’s pie (which was very nice with ample chicken and asparagus and no excess spud).

My potato heavy pie filling was nice enough, but I just would have liked to have had a mix of chicken, asparagus and potato rather than just potato.

Notwithstanding the filling issue, the pastry was very good (no soggy bottoms here) and there was certainly flavour to the filling.

Moving on to the sweet side, the consistency was much, much better. 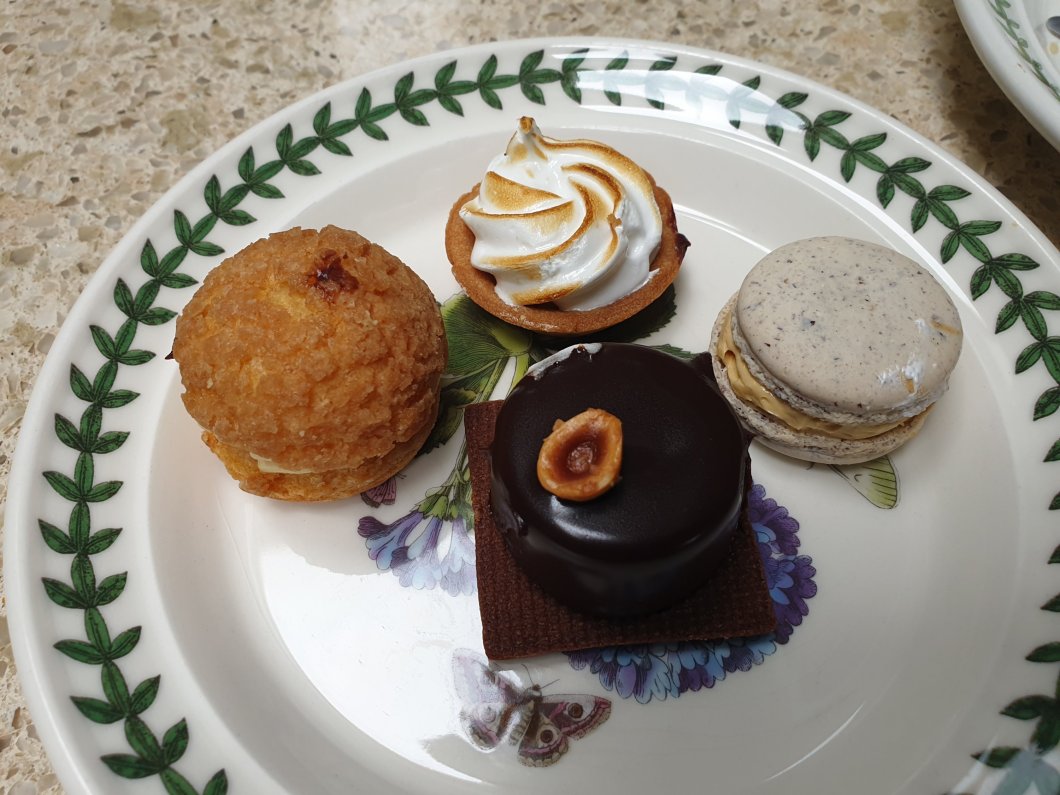 We started with a very rich (in a good way) tarte au chocolate which had a lovely glossy dark chocolate coating, covering a rich ganache which in turn encasing a gooey caramel centre. This all sat on a nicely chewy biscuit base.

Loved this, with the proverbial cherry on the top of the cake being a caramelised hazelnut. 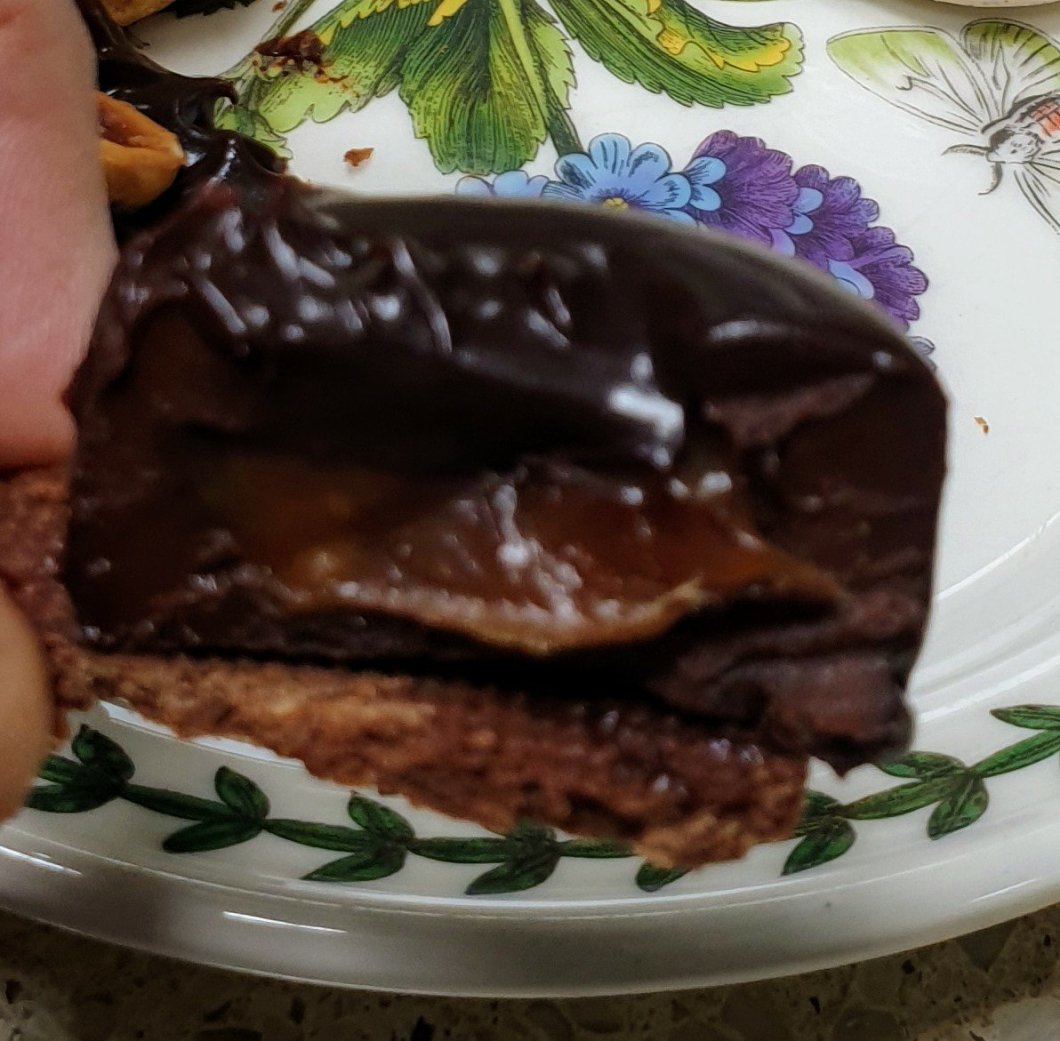 Next up was an equally good (if not better) lemon drop consisting of a rather fine ltalian meringue sitting atop an nicely sharp lemon curd. It all sat in a crisp pastry case. 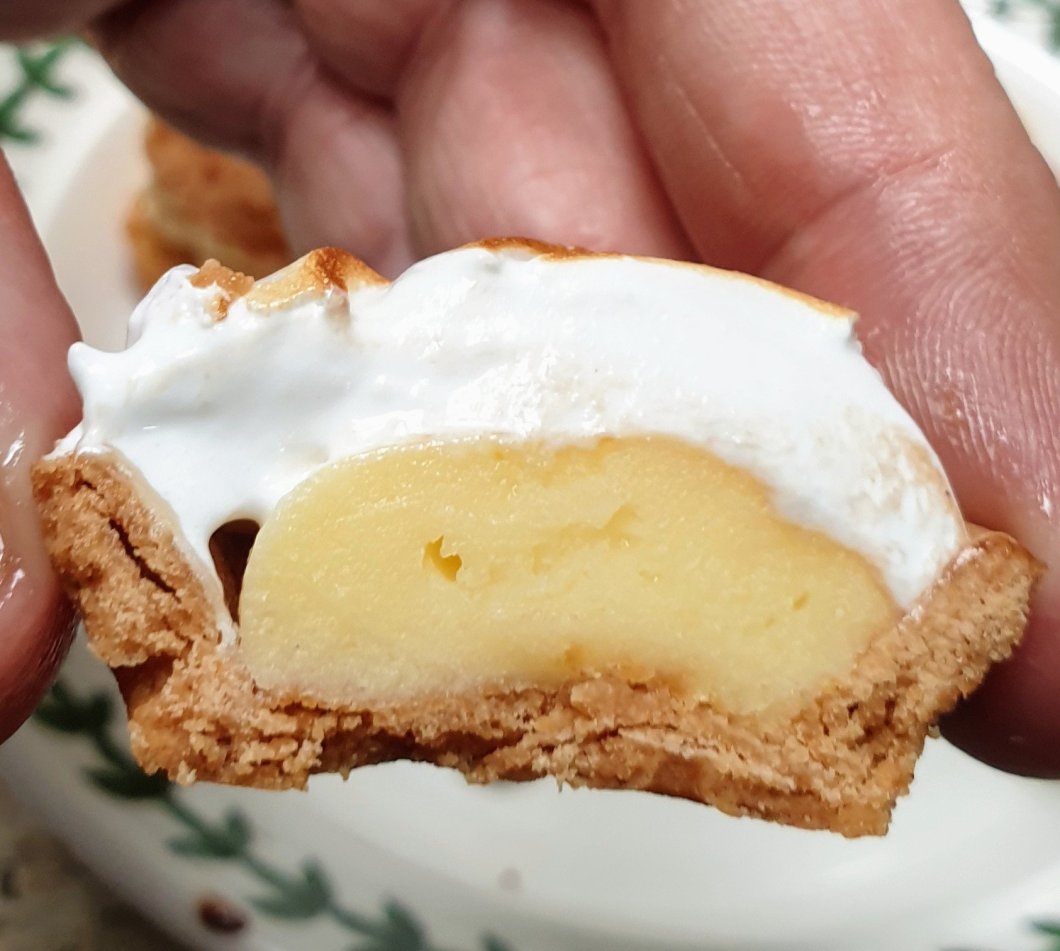 My granny use to make as absolutely killer lemon meringue pie and this brought back happy memories of me stuffing my face with it whilst avoiding the cucumber sandwiches and wondering whether the darjeeling tea was really supposed to taste like it did.

This was followed by a Paris – brest, with an airy choux bun and a peanut praline butter cream. 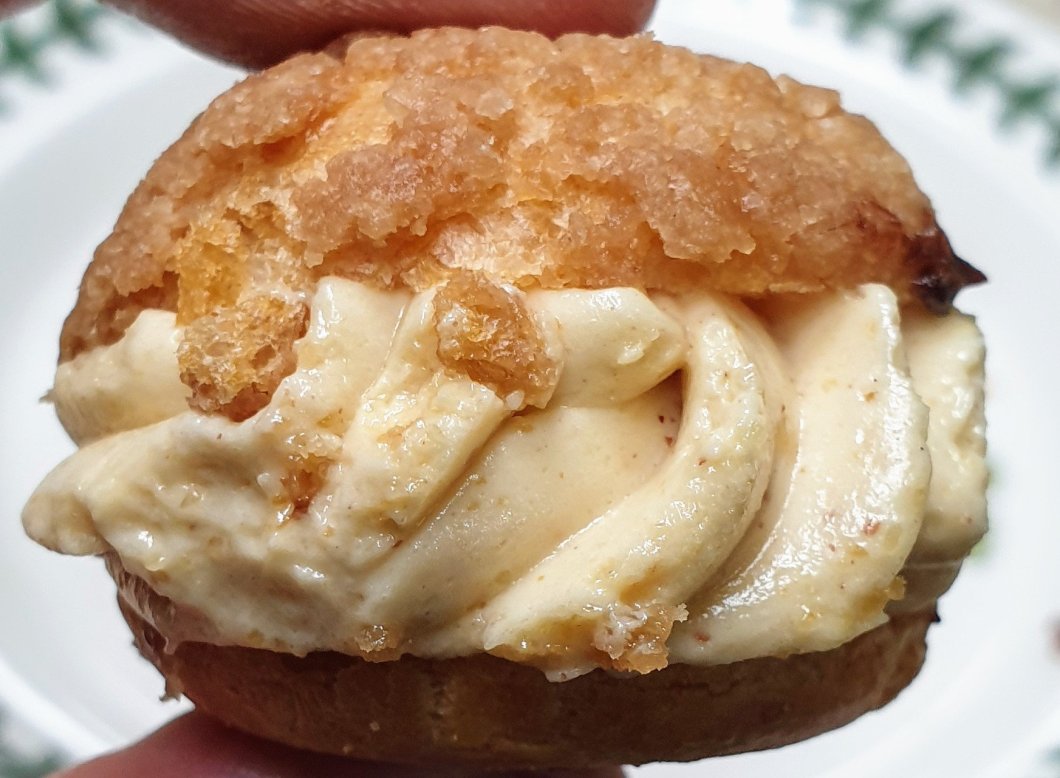 Much as I enjoyed this, I must admit I rather missed the almonds that I usually associate with a Paris – brest.

The sweet box also contained two macaroons, one blackcurrant (according to Mrs. SF – no photo) and one (below) possibly salted caramel (not 100% sure if am honest).

Both had the desired crisp shell and gooey interior, but the flavour was nicer and more pronounced with the blackcurrant one.

The final item of our tea was a pair of scones. Nice bake to these which had a golden top, a desent rise 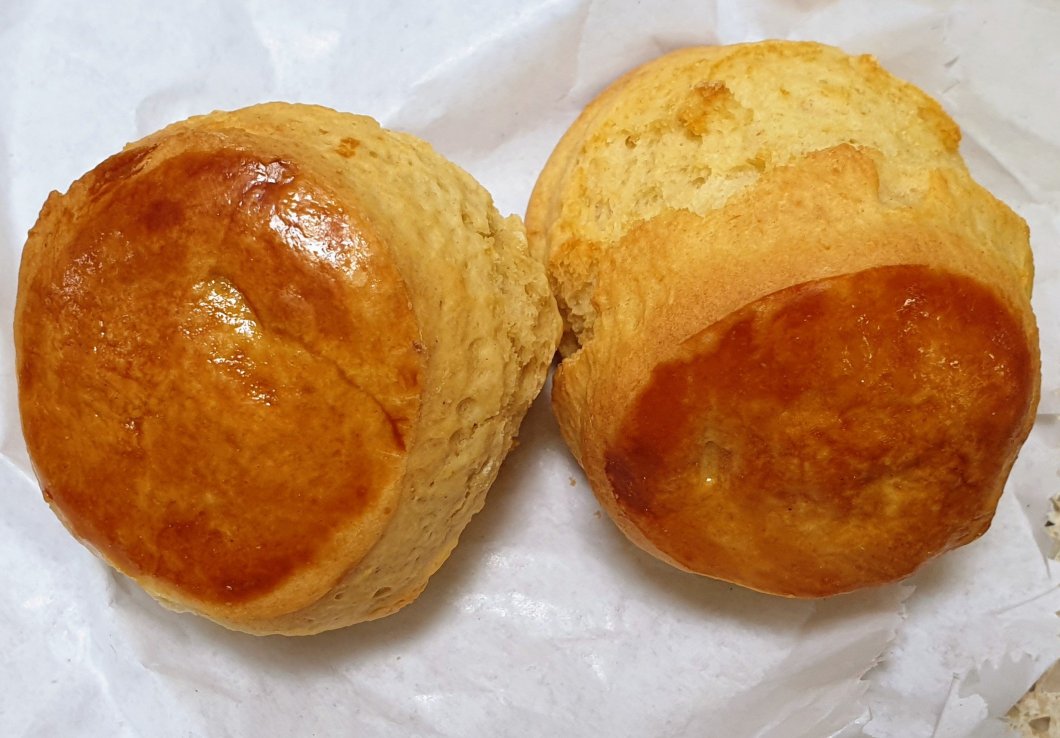 and a light interior.These came with a pot of seedless raspberry jam and two pots of clotted cream. 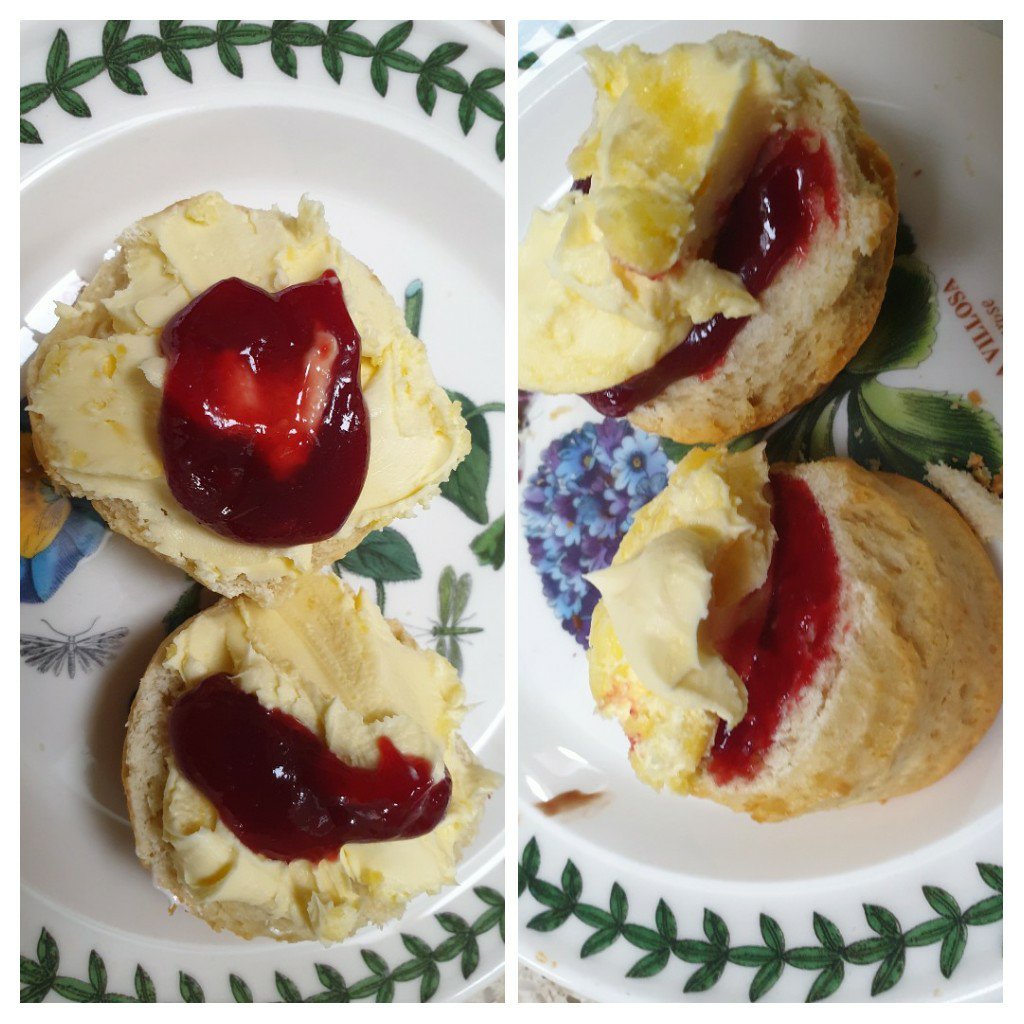 Mrs. SF and I differ in terms of cream teas, with me favouring the Cornish (correct) approach (jam them clotted cream) and Mrs. SF very much in the Devon/Philistine (clotted cream then jam) camp. Very nice either way – Cornish way obs. better.

I very much enjoyed the sweet element of the Cocorico afternoon tea, with these being all top notch.I think my favourite was the lemon drop (have always love a lemon meringue pie and this bought back happy memories), but it was a close run thing with all the cake elements beautifully made and great tasting.

I must admit I was less enamoured with the savoury items, particular the rather sparse finger sandwiches.

I raised this in an email (my personal rather than blog email address – I doubt very much they have heard of the blog, but you never know and I bought in my personal capacity and just happen to write, using that term in the loosest possible way, a blog as well) to Cocorico (attaching pictures of the end crust finger sarnie and my pie) 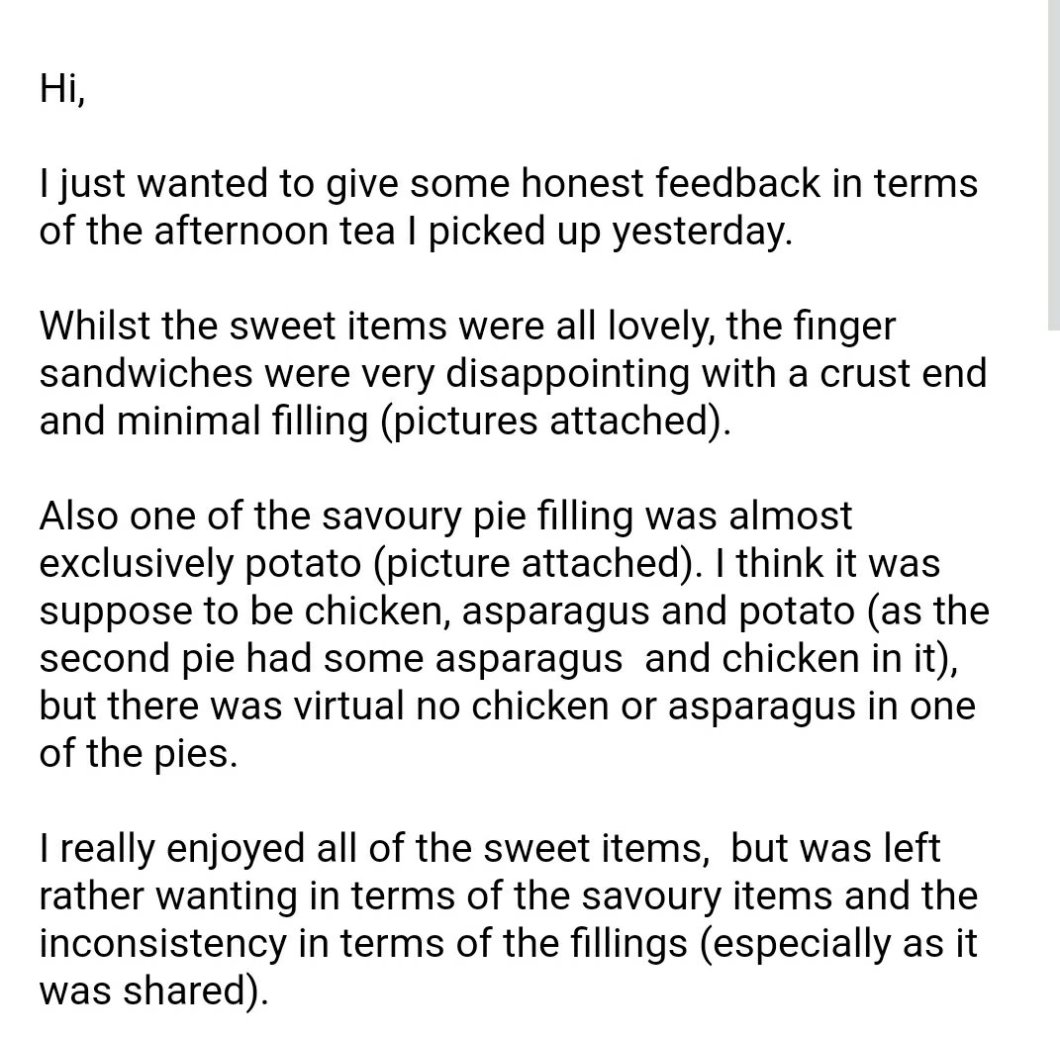 and got the response below (got to raise these things upfront, if going to moan, in my opinion).

I was happy with the response which recognised the issues, explained the difficulty re the pie (luck of the draw, which is fair enough – you win some you lose some) and sought to address the issues raised.

Not even the best places are perfect 100% of the time, and it is how they are deal with issues that arise from time to time that matters (at least to me).

Communication is key and they responded very quickly, with a positive response. That is all most of us want in the circumstances.

Price wise, I think the £22 price tag is reasonable value.

Would I order again? Yes, but for me the standouts were very much the sweet stuff so would probably go for the bite size cake box ( 4x tarte au chocolate, 4 x lemon meringue pie, 4 x Paris – brest for £15) next time.I rather wish they did a full size lemon meringue pie/tart – can’t see one on the website, other than a £5 lemon drop, although all the full size cakes they do do look rather fine.

Both walk ins and click and collect options are available.