As per usual I am very late to the game in visiting Dusty Knuckle’s ‘no longer’ new home at the Printhaus in Canton, Cardiff (and missed the boat completely when they were in residence at Crafty Devil’s Cellar Bar). Due to a myriad of reasons I have not had the chance to visit it until now, but better late than never I suppose. So the question is was it worth the wait?

I think it is safe to say that the exterior façade does not exactly exude promise, with the only outward sign of “Dusty Knuckle” lying within being a blackboard sign behind a gate.

It does rather give it a speakeasy sort of feel though as you enter under the arch.

Once you find it inside (not that easy quite late on a Sunday afternoon) it is a rustic, but rather nice spot. Outdoors but also undercover (we luckily choose a rather warm rainless day to visit) so unless it is really windy it is pretty sheltered from any rain that may fall (and there are patio heaters and blankets if it is a bit chilly).

The first thing I noticed was the rather fine looking wood burning pizza oven. Boy would I love to have one of those in my garden.

A real bonus for me (as a dog owner) is they are totally dog friendly. My two were welcomed with open arms and a bowl of fresh water.

Cardiff is not greatly endowed with doggie friendly places to eat and it is nice to be able to add a pizza gaff to the rather short list. Luckily they were well behaved!

The food and drink

The menu is, of course, dominated by some rather fine sounding pizzas. They do, however, also have a selection of sides/sharing platters/starters (when we got there – 3pm on a Sunday – a fair few things were off the menu).

Mrs.SF and I (being greedy buggers) decided on one each of the veggie (£6) and meat (£7) antipasti to kick off proceedings.

The veggie one was a mix of pickled veg. (star was some lovely pickled radishes), pickled fruit (apple and pear – both lovely and sour) and cheeses. The cheeses were a very nice goats cheese (Ragstone I believe) and, a favourite of mine, Brunost (a Norwegian cheese). The latter is the brown one and it is an unusual one with an almost caramel sweetness (looks like fudge and tastes a bit like it – an acquired taste but one I am rather fond of). Both cheeses worked really well with the pickled veg. and fruit

In terms of the meat platter there was an element of duplication with the veggie one (sauerkraut, goats cheese and pickled radish), but the meats were good (some may argue the portions meat wise are a little small, but it did include a wagyu number – which doesn’t come cheap in any form)

Whilst both were very nice I thought the veggie one better value than the meat one which looked a bit lost on the board it came on. It would also have been nice if they had come with some bread or crackers. These were noticeably absent from both platters and I only belatedly realised on writing this up (from the pictures taken) that laverbread crackers were part of each of these items on the menu – certainly didn’t get any of these on either of ours which was a shame as the platters definitely would have benefited from their addition.

This is what is the meat platter apparently should have looked like. Dusty Knuckle sent me this picture after seeing the post saying sorry it should have been like this. Seems I got unlucky:?. Certainly looks more impressive than the one Mrs. SF and I got (ours was not what it should have been due to a mistake on what was a training day I have been told). Even if it didn’t look like it should have, I still enjoyed it.

On to the main event, we both ordered the pepperoni pizza (£9). This had the stellar selling point of using BBC Food “Best food Producer Award” winning Charcutier Ltd’s pepperoni. This stuff is absolute gold and about as far from standard pizza pepperoni as beluga caviar is from lump fish roe. The pair who make up Charcutier Ltd made an appearance, fresh from Riverside Market, for lunch whilst we were there.

The pizza base had a lovely chewiness to it with a slight char. Great marinera sauce and bubbling mozzarella cheese (plus intense basil leaves) completed what was a really good pizza.

Mrs. SF and I enjoyed our pepperoni pizzas so much we decided to share a third pizza. This time we went for the white one (£9 – no marinera sauce here) with mozzarella and toppings of spring onions, potato and that super food purple sweet potato. The latter was in place of the advertised mushrooms. I had no qualm about this as purple sweet potatos are apparently responsible for the longevity of people on the Japanese island of Okinawa (they are it seems one of the healthiest foods on the planet and as a result Okinawians are amongst the longest living and healthiest people on Earth ). They are tasty too, so an all to rare double whammy of tasty and really good for you. 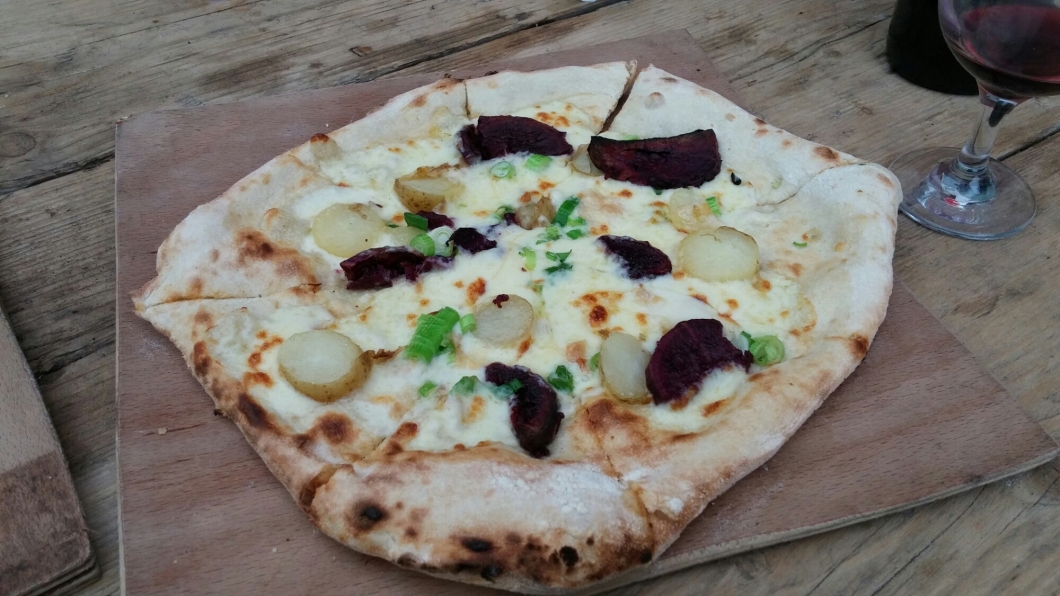 This was utterly delicious.

My only moan regarding the pizzas was the plywood they were served on. Old fashion miserable gits like me prefer plates I am afraid.

Having scoffed two sets of antipasti and three pizzas, we passed on dessert (tempting as the rosemary chocolate pot and vanilla ice cream and honeycomb were).

On the booze front they have a list on display covering beer and wine and prices look very reasonable (by way of example the Some Young Punks Squid’s Fist – which looked to be a good wine to pair with the meat based pizzas- retails at between the £16 to £19 mark as against the price here of £22).

The list overall, whilst short, seems well chosen for the pizzas they serve up. A welcome bit of thought appears to have gone into this list.

At the time of my visit they only had a special events license so it was BYO (no corkage fee charged – yippee!).

I hadn’t realised this and if I had I would have brought a rather good Barbera d’Asti wine I have a case of stashed away. 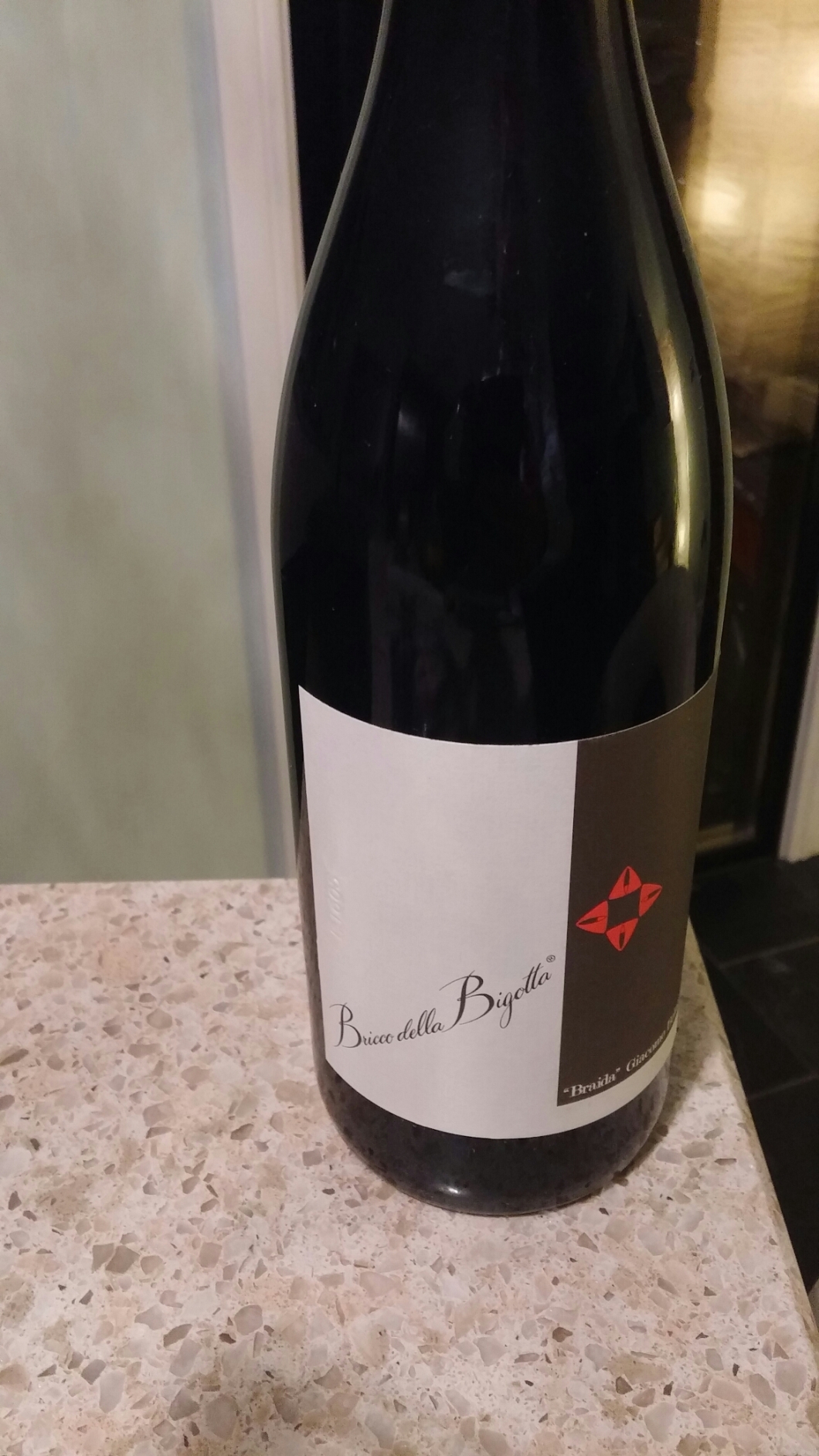 I, however, nipped down to the Crafty Devil’s cellar and shop (a short dash down the road – they sell wine as well as beer) and picked up (in a rush) a Vina del Ora rioja (£10).

A decent enough rioja which worked fine with the food (a sangiovese or barbera based wine would have been better with the pepperoni pizza and a Northern Italian pinot noir or a chardonnay better with the white pizza).

Great place serving really top class pizzas and some lovely other stuff, as well as being dog friendly. From my perspective it was very much a case of “What’s not to like?” Well no plates and no crackers with our platters perhaps, but overall very good.

We paid £40 (sans a tip) in total which I thought fair for the quality of what we got.

Would I go back ? Absolutely – loved it. As the title suggests totally knock out pizzas (might bring my own plate mind and will certainly make sure I get the crackers next time).

Website:click here – minimal info at time of writing on site.