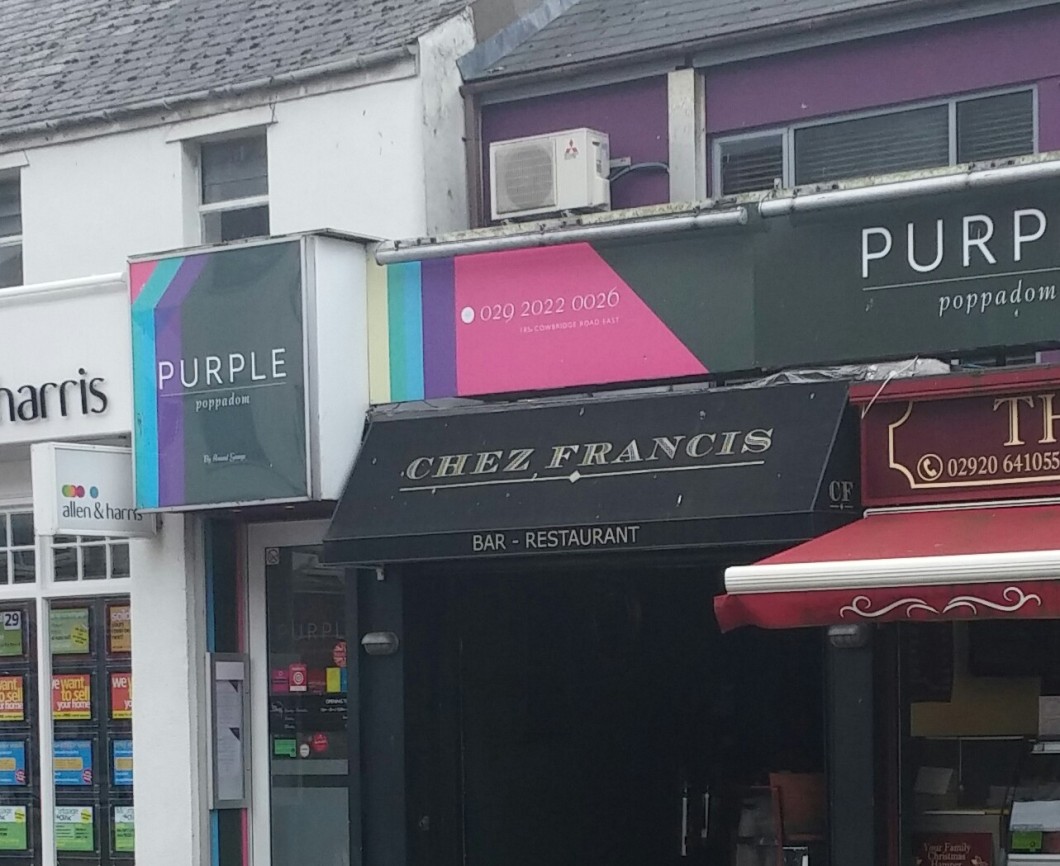 A ritual in the department I work within is a financial year end knees up. A brief moment to celebrate the end of a hard slog to beat the set budget, as the task of meeting the next one starts again in earnest. This entails a long boozy lunch, which for those with the stamina (not me these days), goes on long into the night (all paid for – within reason – by the firm).

Food wise, over the years, it has been hit and miss (mostly miss) with one absolute car crash of a meal at the now (thankfully) closed Browns.

The risk with these things is – due to numbers, as with the Office Christmas party – you get a “I saw you coming, suckers” set menu where a premium is charged for any old dross the kitchen is keen to get shot of.

This year, however, held much promise in my eyes as we decided on eating at Chez Francis, an unabashedly French bistro in the Canton suburb of Cardiff. Owned by the chap who use to own La Gallois, it has some pedigree and is a place I have been meaning to visit for a long time but to date have not got around to going. A chance to go with someone else paying, therefore, equated to a bit of a double whammy.

The fact that they were happy for us (a large group) to pre – order off the normal menu, rather than having a “bespoke” set menu for the occasion, gave them a huge tick in the box from me before we even arrived 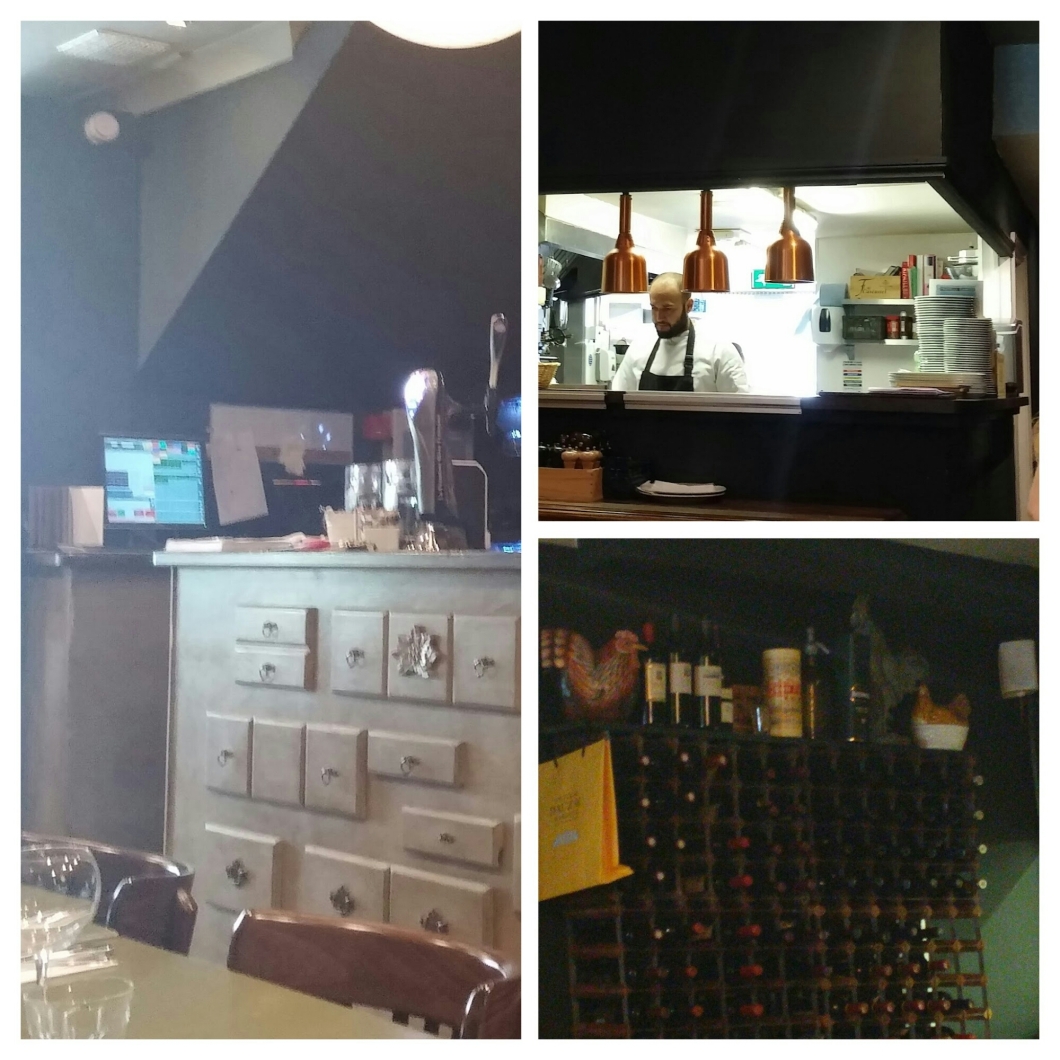 Inside it has the look and feel of one of those unobtrusive places in a quaint French village you happily stumble upon of a lunch time and which you find is full of workmen in fluorescent tabards (they always know the places to eat well on the Continent) tucking into the “Plats de Jour” washed down by a bottle or two of the local vino (obligatory it would seem before operating heavy machinery in the afternoon). It couldn’t be more French, unless perhaps it went on strike and blocked Cowbridge Road East with burning tyres.

Outside it is fair to say it has been somewhat shoe horned into the space underneath the Purple Poppadum and the compact exterior leads to an equally compact and bijou interior.

The food is unashamedly French focused, with only the slightest of Gallic shrugs as to the existence of food outside of French cuisine. 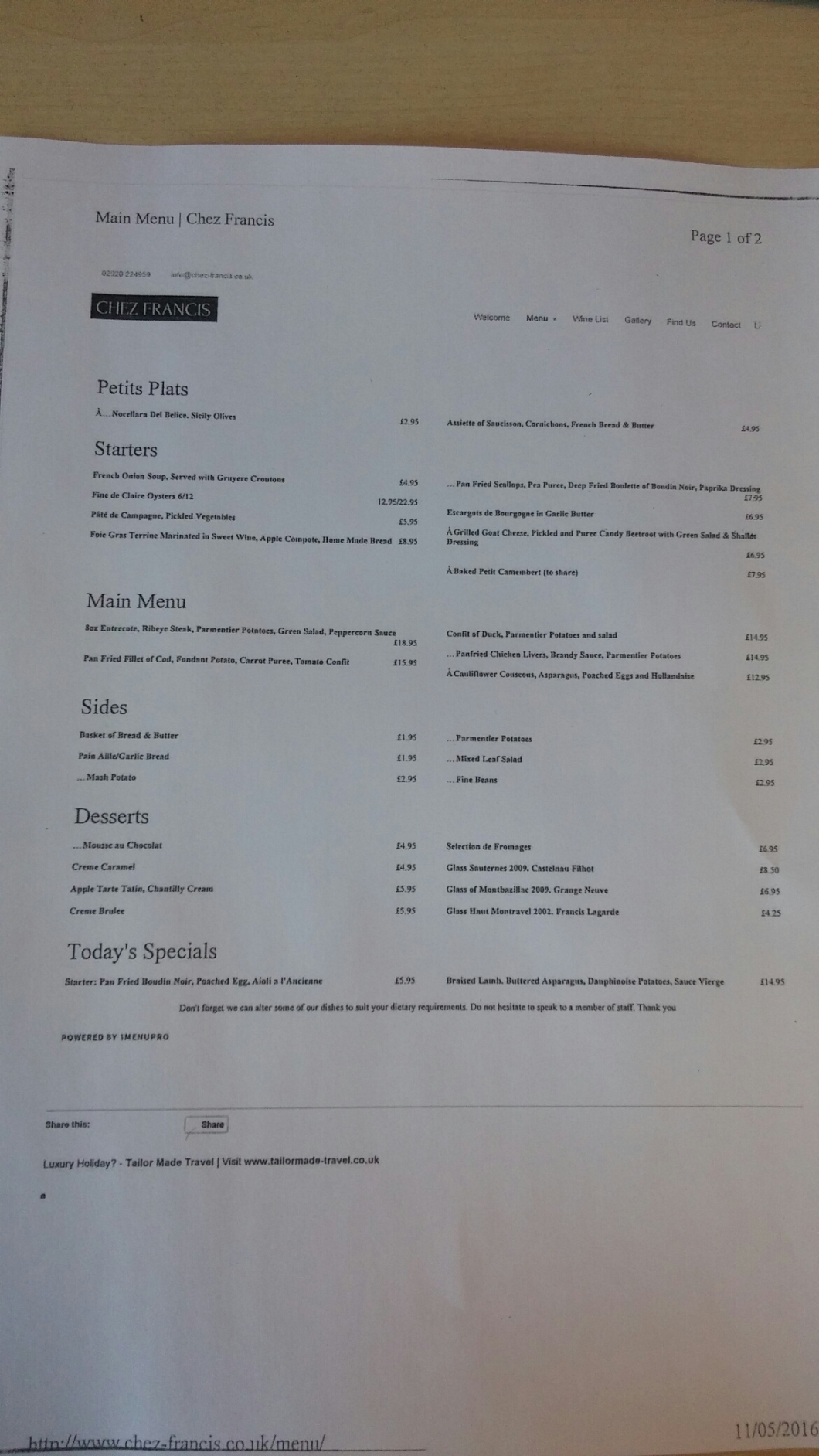 The pleasingly short menu is populated with French classics like cassoulet and confit duck.

To commence proceedings, I opted for “Escargot de Bourgogne in garlic butter” (£6.95 on the al a carte menu). Snails are something I have loved since childhood (my parents being fairly cosmopolitan in their food tastes during my formative years), but have not had for some time. 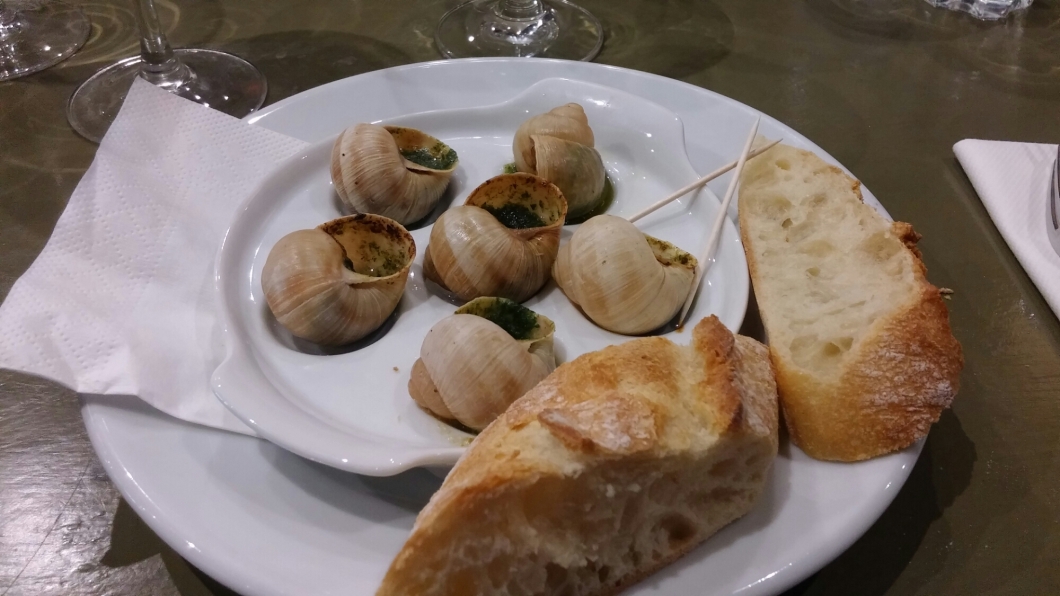 My snails were as good as I remember. Meaty with lashing of garlic infused butter. We really should eat more of them in this Country. In Spain after it rains there are legions of people out harvesting the free bounty that they represent. I did, however, think the price (based on its size and the size and the price of the other starters) was a touch on the high side. Extract the snails from the six shells and you don’t get much in reality for nigh on £7. 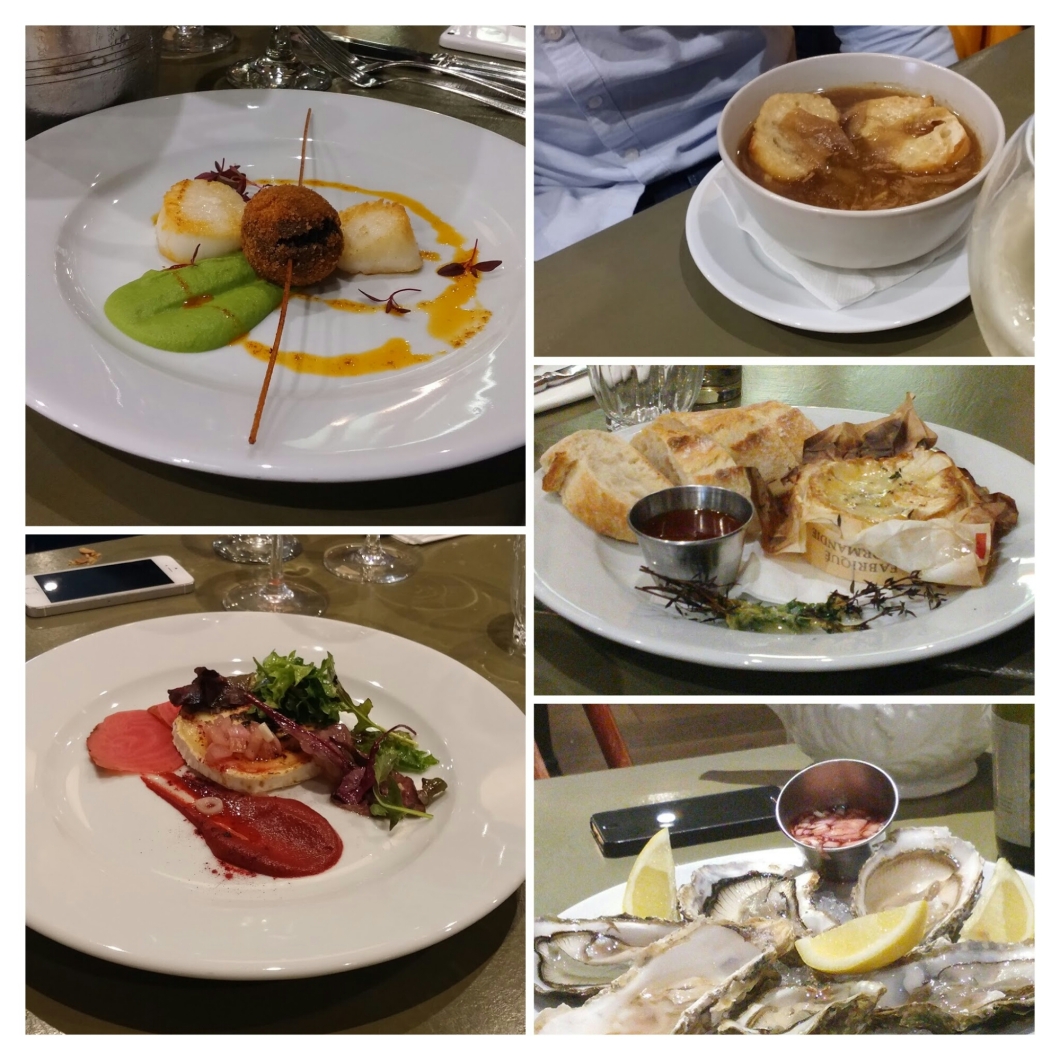 All were pronounced as good and seemed to me to offer better value than the snails.

On to the mains, whilst tempted by the cassoulet and the braised lamb shoulder, on seeing the menu my eyes were immediately drawn to the pan-fried chicken livers, with brandy sauce and parmentier potatos (£14.95 on the a la carte menu)

I love offal and it is rare to see chicken livers (other than in pâté form) on a menu these days. If cooked properly (pink on the inside and caramelised bits on the outside) they are a thing of beauty. If, however, they are overcooked they are vile (grey, grainy of texture and as dry as the Atacama Desert).

These were bang on the money and cooked “à point” for me, with a nicely pink interior. No photo regrettably as it didn’t come out (due to a combination of operator incompetence and a fair few glasses of red wine).

The parmentier potatoes were crispy on the outside and fluffy on the inside, well seasoned and oil free. This delightfully rustic dish was topped off nicely with a lovely brandy cream sauce. Not a looker (so no great loss on the photo front), but all in all a very satisfying dish and a good portion size for the £14.95 price.

Other dishes equally enjoyed included very decent sized, tender as you like, entrecôte steaks (always risky ordering steak with large numbers, but here they were all cooked as ordered, even if some of the orders – yes, you Rachel – of “well done/cremated” no doubt had the chef shedding a tear or two), nicely priced at £18.95, 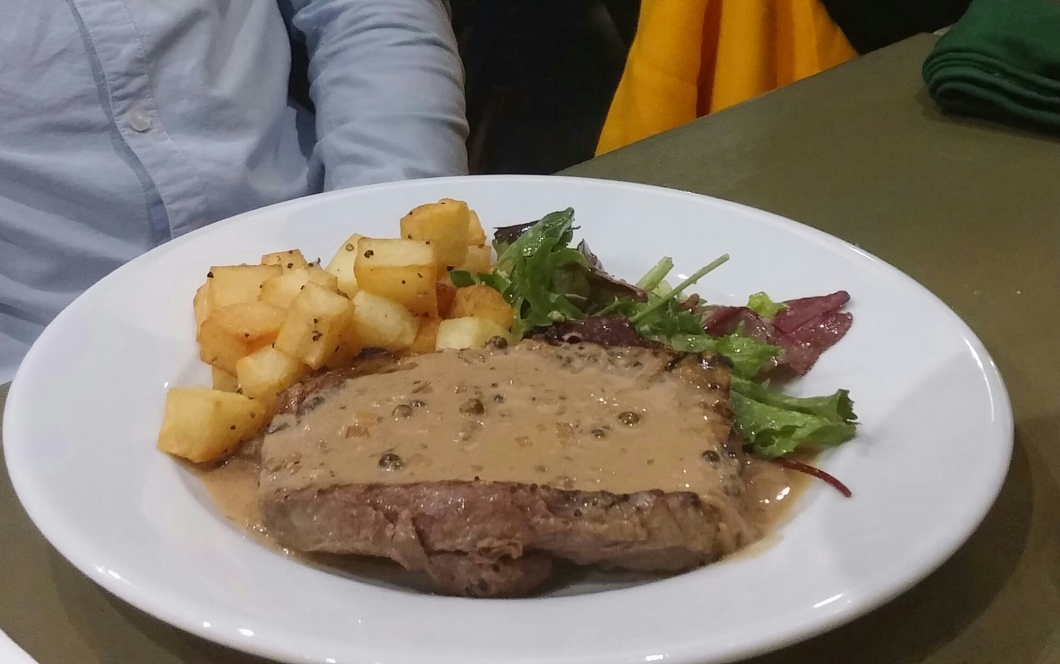 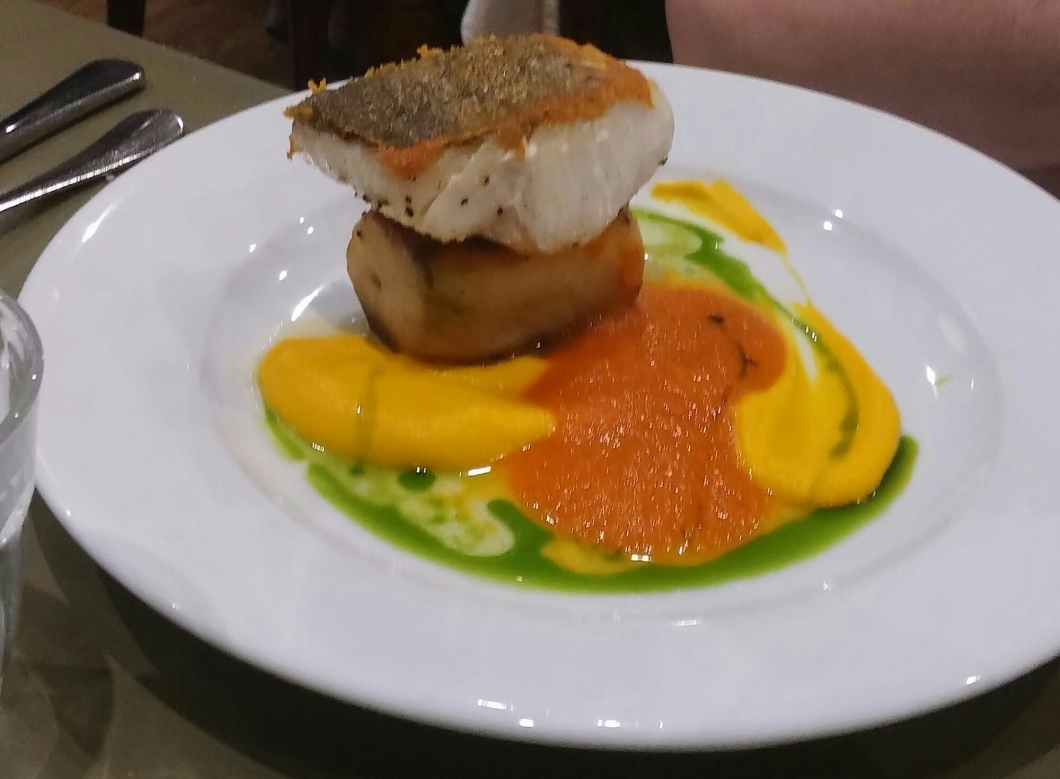 On the puds front, what could be more French than an apple tarte tartin (£5.95). Rightly a classic, this version was perhaps a little more rustic than some I have had, but none the worse for it taste wise. Add to this Chantilly (that word always gives me the urge to break into song based on the tune “Chantilly lace” by The Big Bopper – probably have to be an oldie like me to remember this) cream (a sweetened, vanilla-flavoured whipped cream) and what I got was very agreeable.

It would perhaps have been better if served hot (but with our numbers I understand why that probably wasn’t a viable option) and on a plate rather than the dreaded slate.

Others went for chocolate mousse (£4.95) which was rich but light and got a thumbs up alround 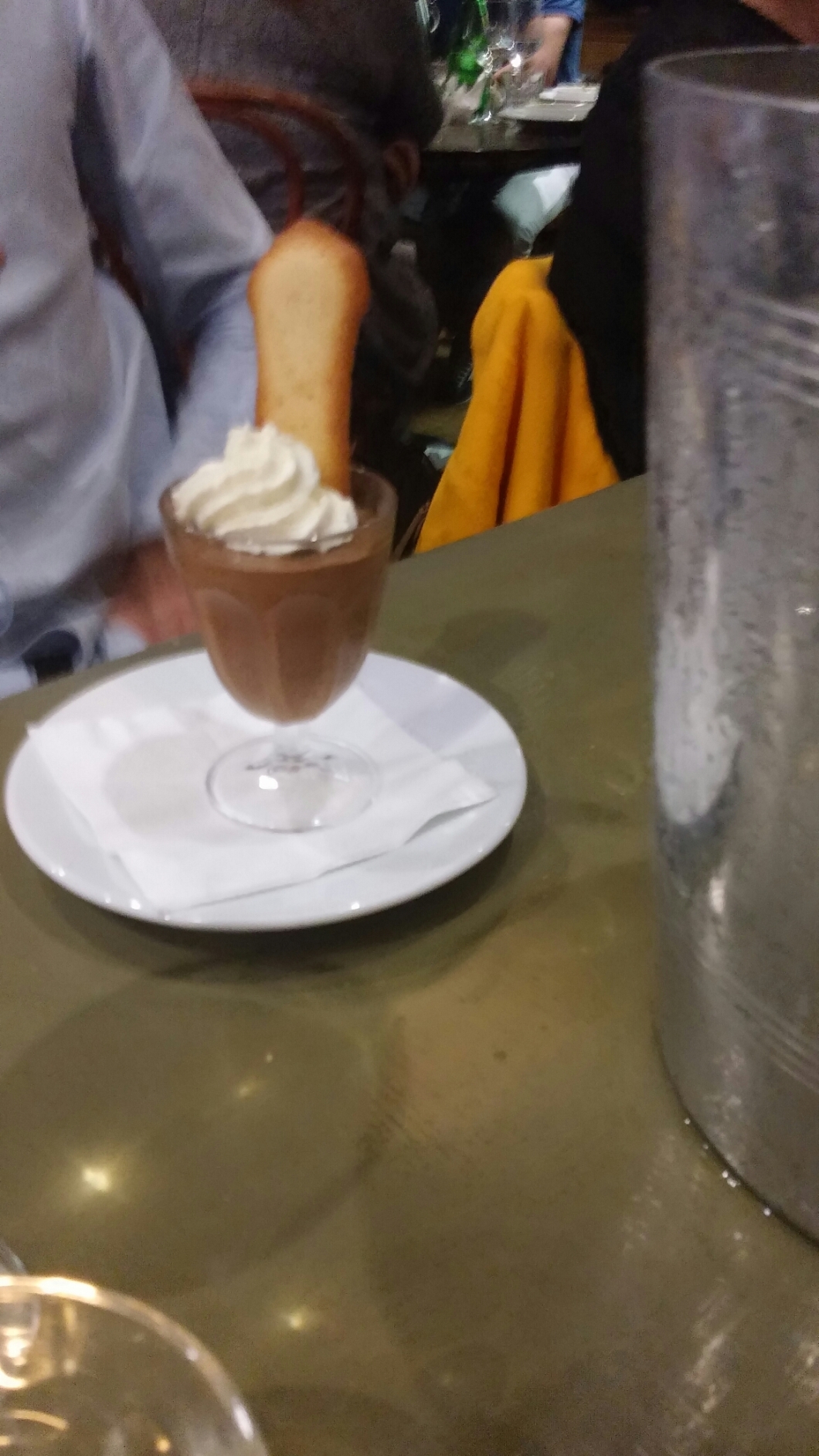 The wine list is French to the core with, as per the food menu, only the merest acknowledgement that there is a wine world outside of France. 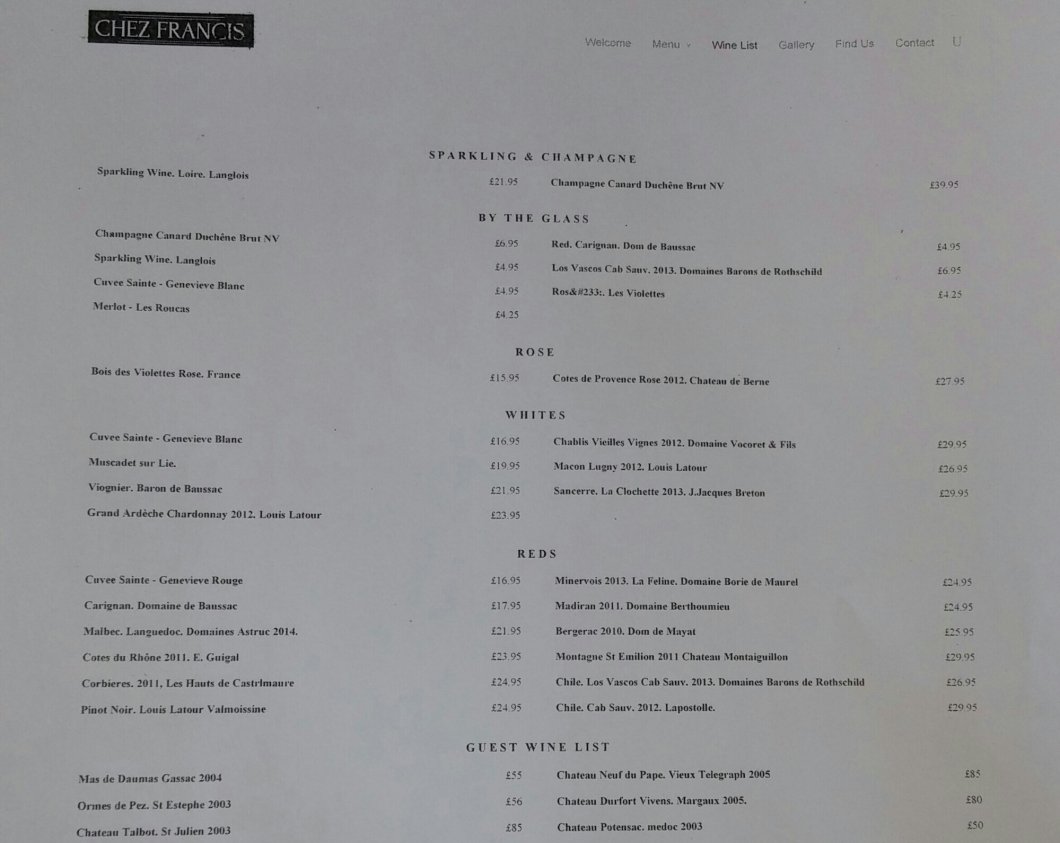 The only non-French wines on the list are two Cabernet Sauvignon wines from Chile in the form of a Las Vascos 2013 (the winery that makes it is owned by the very French Domaine Barons de Rothchild – as in Chateau Lafite Rothchild) and a Lapostalle 2012 (with the winery that makes that being owned by the equally French Marnier Lapostalle family of Grand Marnier fame). So a very French – yes wine may be made outside of France, but it is only any good if we make it.

One thing I was very surprised at was the lack of any Alsace wines on the list and, in particular, that there are no Rieslings. A great shame that in my view.

I was given the task of choosing the wine (always somewhat of a poisoned chalice). For the red (which I was drinking), I went for a Cote du Rhone 2011 from E Guigal at £23.95 (not bad price, with Waitrose selling it for £11.95) as everything E Guigal does is quality. Have a few of his Cote Roties stashed in my wine room.

A very versatile food wine, it is ideal for this sort of event, where the wine needs to be all things to all people. A mix of Grenache and Syrah grapes, it was full of black fruit flavours (black cherry and blackcurrant) with a touch of black pepper spice on the finish.

For the white – I decided on something dry and not too pricey would be in order and opted for that French Bistro classic Muscadet sur Lie (£19.95). 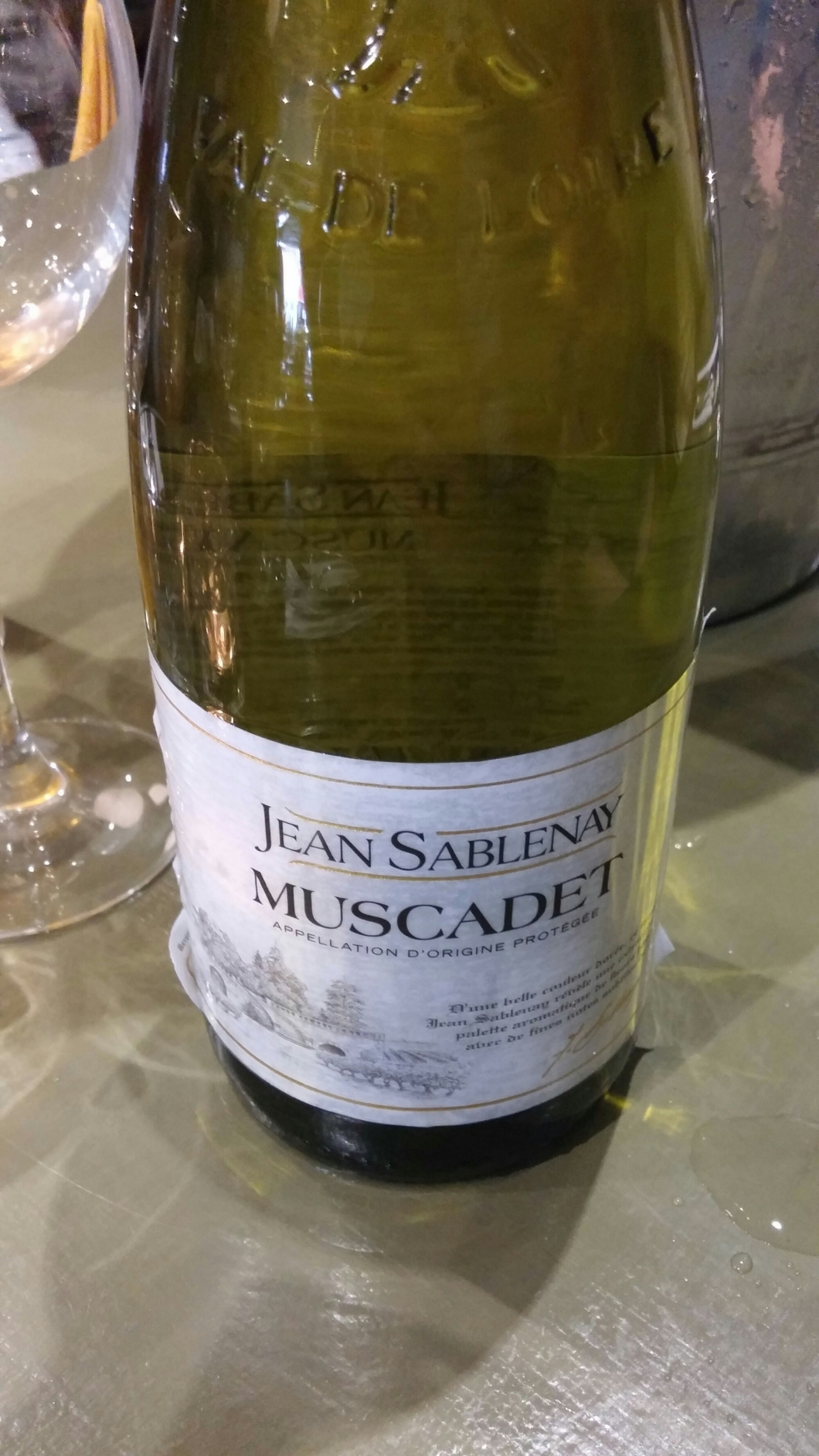 This was a nice fresh, crisp wine. Uncomplicated, but very drinkable. The low alcohol level of this wine also helped as it was a long day on the booze.

We also ordered some fizz in the form of a Langois Crémant de Loire (£21.95). A pretty good party wine, so ideal for the occasion and more easy on the budget than the champagne on the list (Canard Duchene Brut NV at £39.95). People should drink more crémant wines. It is usually good value and I (admittedly not a great fizz drinker) find it is invariably better quality and value than the current ubiqutious prosecco.

We did delve a little deeper into the list with a few more bottles. 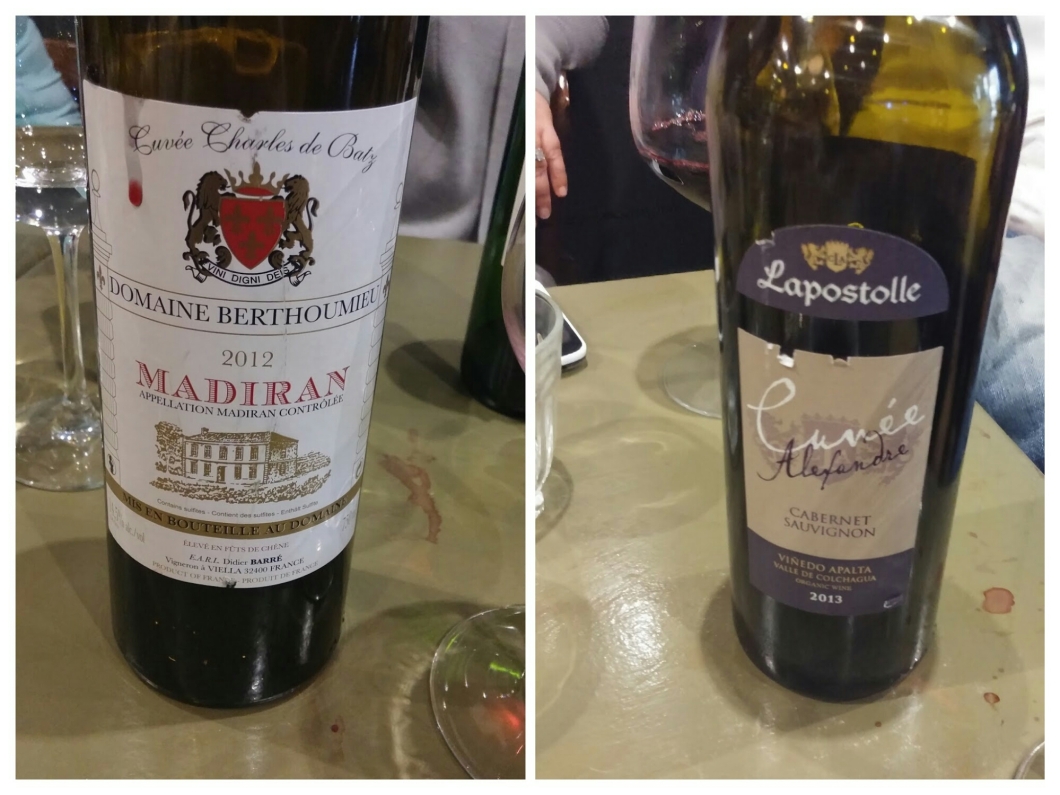 Both was very good and it is always nice to see a Madiran wine on any list. Puts hairs on your chest that wine.

As indicated at the beginning of this post, meals out on works events have been more miss than hit, but Chez Francis was definitely a hit. Good food and good wine, a cosy space and excellent service made for a very pleasant afternoon. Whilst the firm (rather than I) paid for my food and drinks (and stuff is invariably better when someone else pays) I would be more than happy to pay the very reasonable prices being asked for food of this quality.

Would I go back? Definitely, great little place that exudes Gallic charm and I would highly recommend it for a work’s do, date night, family dinner or lunch out.