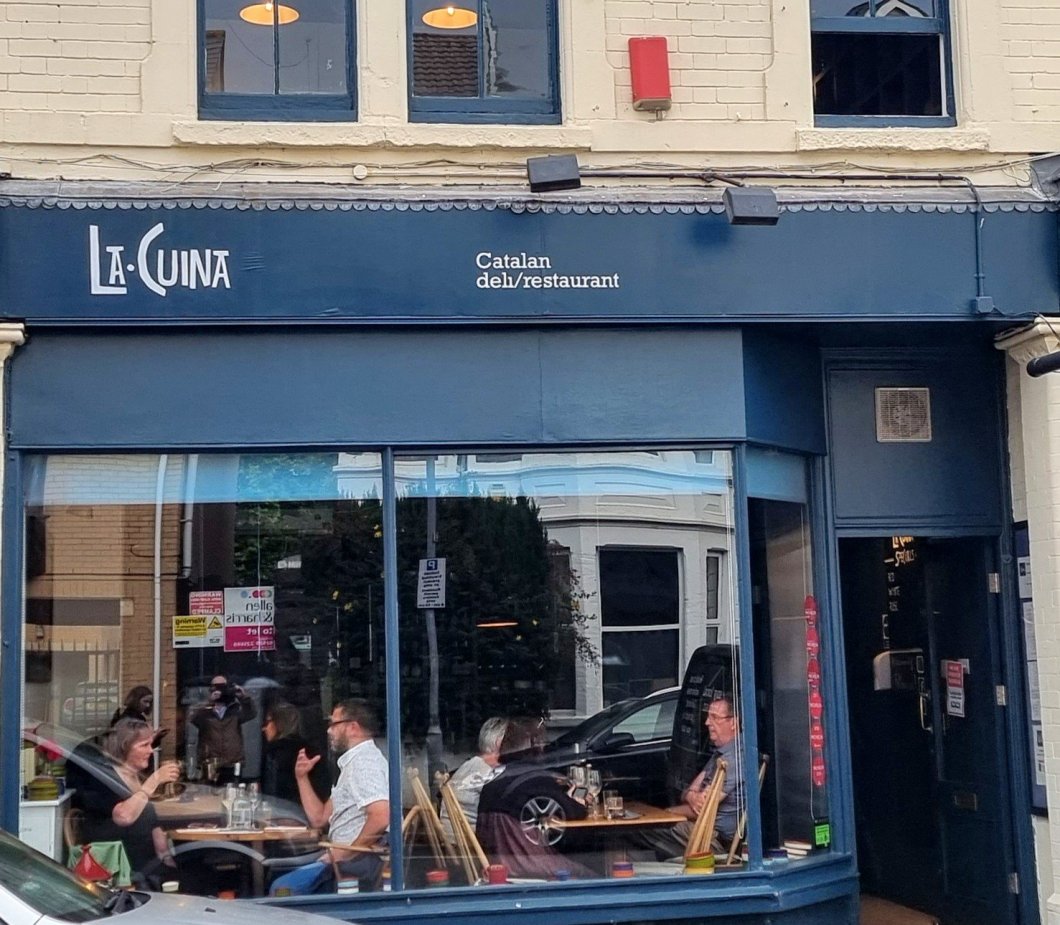 As readers of the blog will know I have an enduring passion for all thing Iberian, especially the food and wine.

It may therefore surprise some that I have not, on the blog, got around to commenting on La Cuina – a Catalan restaurant in the Canton/Pontcanna (the later, by estate agent edict, seems to get bigger by the day) suburb of Cardiff.

The Catalan area of Spain is somewhere I really need to explore further (I have not really, to date, got much further than the glorious city that is Barcelona), with the wines of Allela, Monstant, Penedes, Costers del Segre, Conca de Barbera and the more well known, but often pricey, Priorat (to name but a few with their being 11 specific wine growing areas in the region).

I led a cracking tasting for the Jeroboam Club in Bristol back before lockdown on the tinto wines of the Spanish Eastern Coast from my collection,

with two of the top two wines (joint first) being a Priorat (Clos Mogador 1989) and another Catalan wine, a Sot Lefreic 1999 (Penedes). 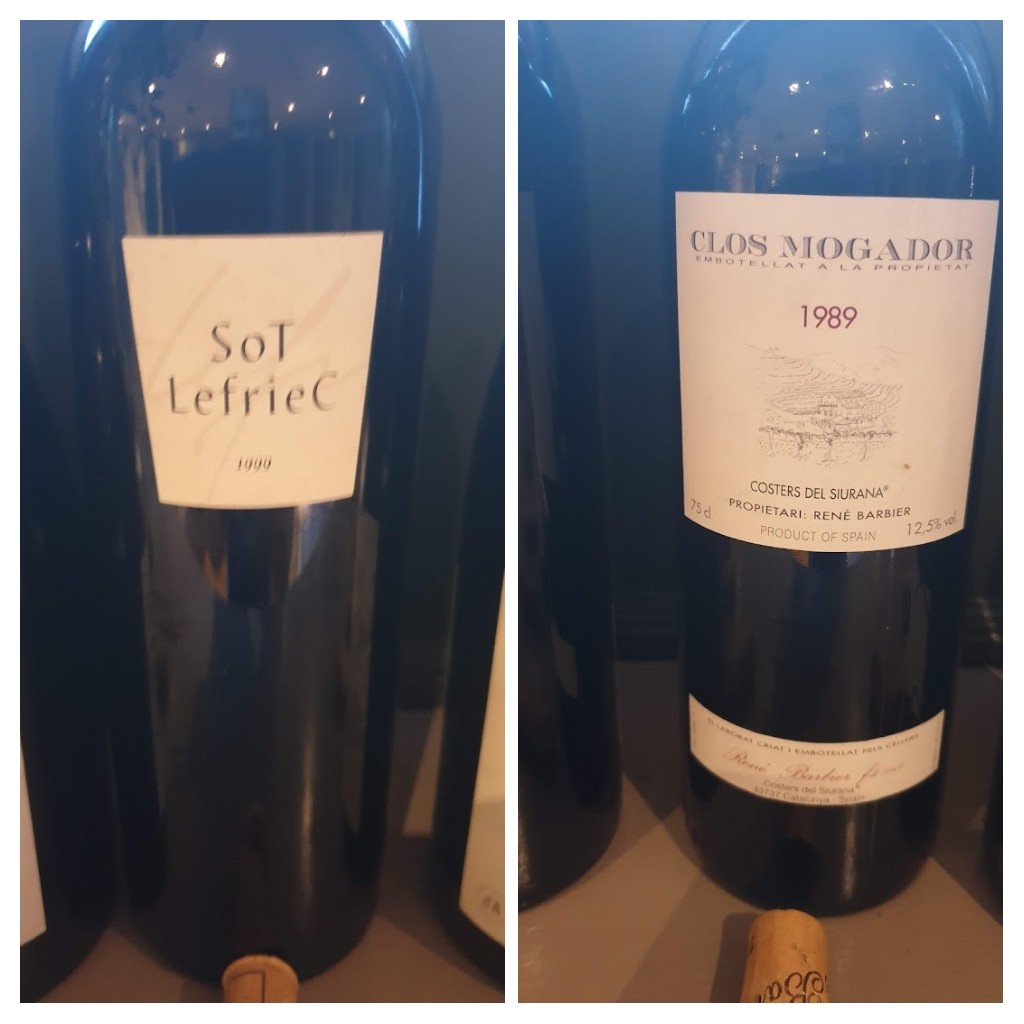 Food wise the mix of a long coastline on the Mediterranean and a mountainous interior (including the mighty Pyrenees) provides for a rich bounty of fish, meat and vegetables. Pyrenean mountain lamb and Catalan calcots, for example, are famous around the world. As I say I really do need to get over there soon.

La Cuina’s stated philosophy (as set out on their website) is to source produce from small artisan family producers in Catalonia. This is an admirable way to do business and one that certainly bodes well for any meal there to my mind.

A place very much in keeping with the “Homage…” title (from the increasingly, it seems, prophetic George Orwell), with a recent ringing endorsement from the Tyre people.

With Mrs. SF away, J (as per usual) stepped into the breach so as to ensure I wasn’t “Billy no mates” and eating solo (actually I don’t mind eating out on my own, but company is always nice).

Unassuming little neighbourhood restaurant on the outside, it is quite cosy in the inside. 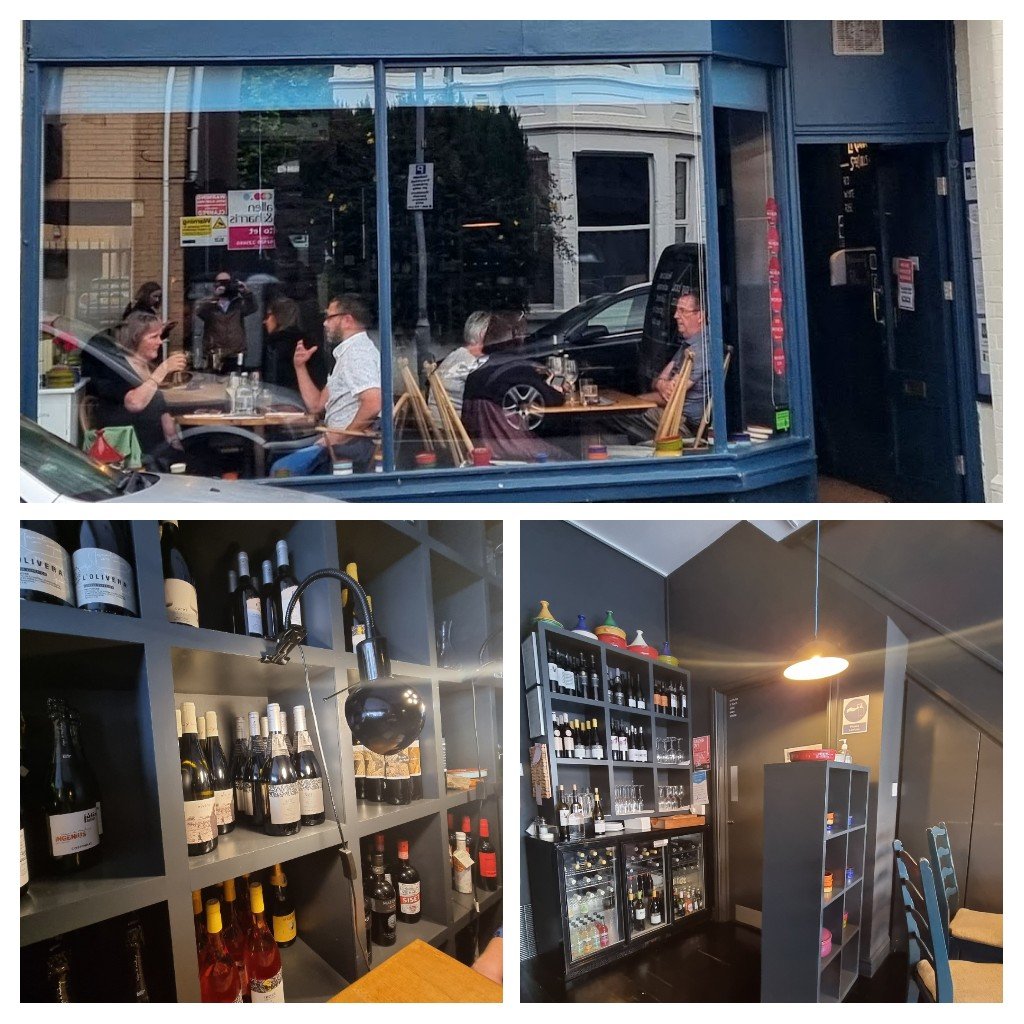 We were seated by the wine store, which I rather liked. J very nimbly bagsied the chair leaving me with a pew (great for correcting my appalling posture, but not the most comfortable it has to be said), which she found highly amusing.

The menu has a nice feel to it, with a mix of tapas and larger “raciones” sized dishes to start 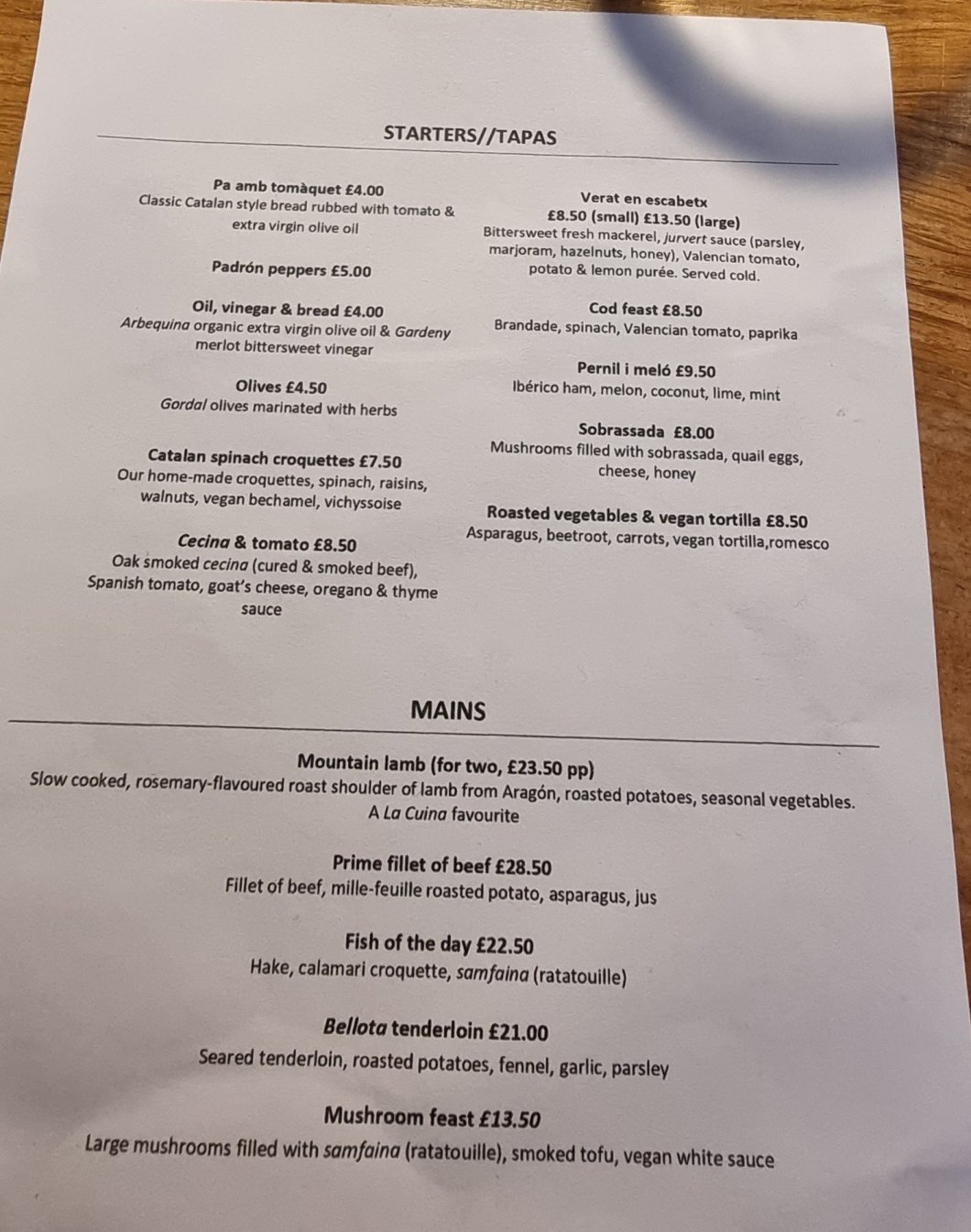 and substantial mains. Really nice sounding menu I thought, with nods to both the vegans and veggies (particularly starter wise) amongst us as well as the omnivores.

When J and I eat out, we quite often share (we have similar tastes in food and both suffer badly from food envy) and that was the order of the day in terms of both starters and mains here.

First up was the simply named cecina (dry cured smoked beef – an old favourite of mine) and tomato (£8.50). 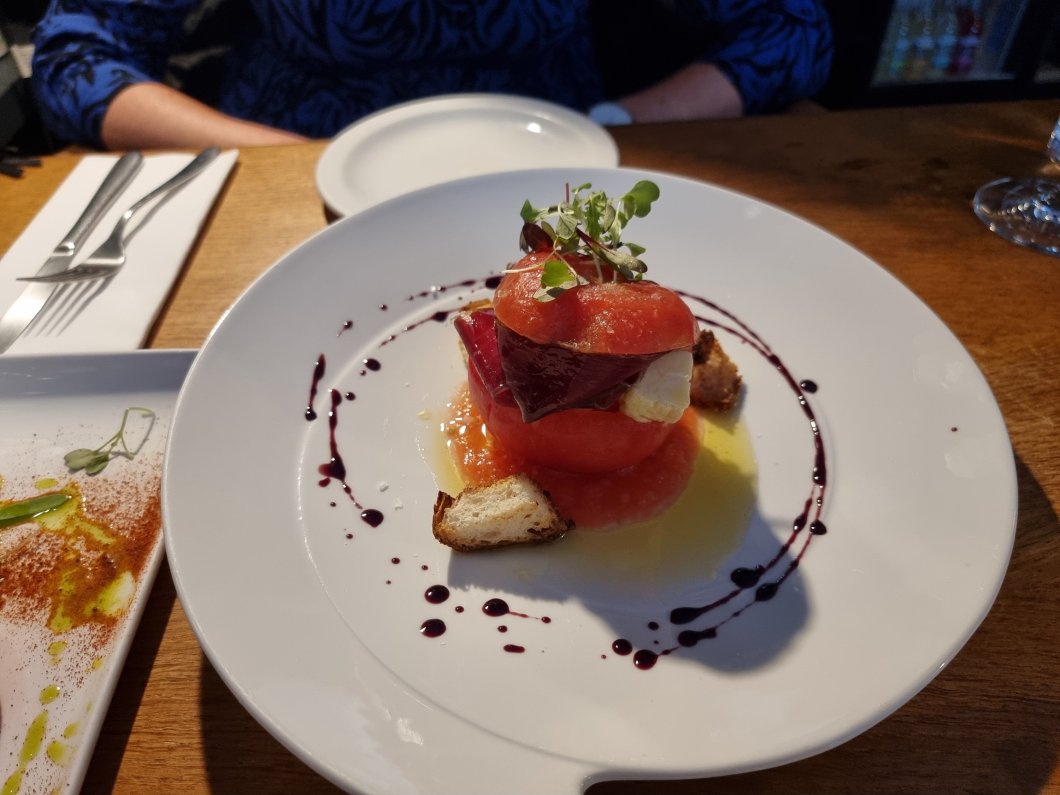 Lovely looking dish this, which J then proceeded to demolish with a view to splitting it between the two of us.

Tomatoes in the UK often taste of bugger all (god knows where we get them from – suspect many have never seen dirt being grown hydroponically), however, here the full flavour bomb that comes with a good tomato (Valencian in this instance) was on full display.

Lovely sweetness to this tomato, which also had a really refreshing acidity to it. 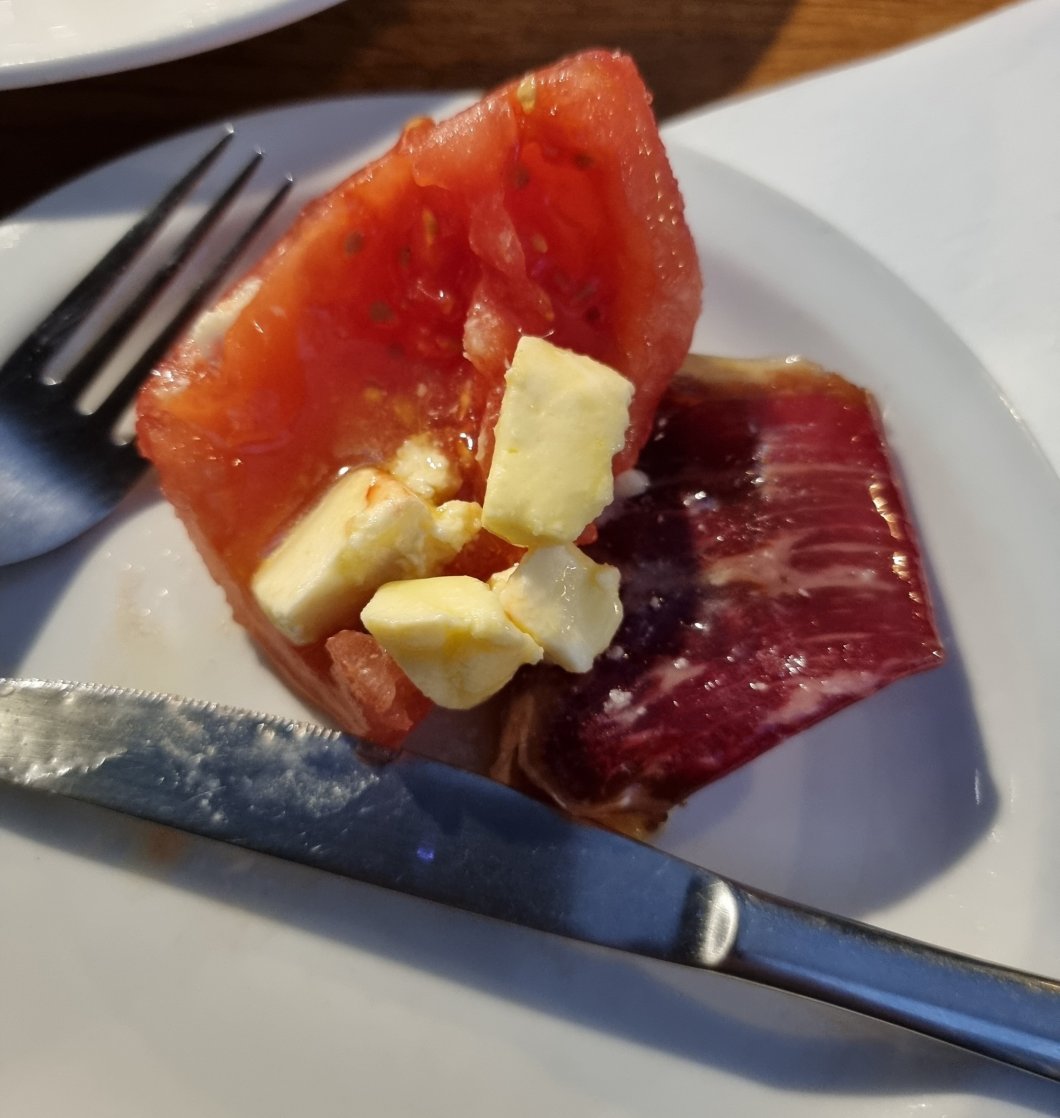 The cecina was top notch adding a big hit of intense beefiness and a beguiling, yet subtle, smokiness to the equation, whilst the goats cheese brought a pleasing sharp saltiness to it all.

Under the tomato was the pureed pulp, which was heady with oregano and thyme.

Great balance of flavours on display here, which work so well together.

Some nice textural contrasts here too, with the firm yet ripe tom, slightly chewy cecina, squeaky cheese and the crunch of croutons. Cracking stuff.

Next up was a intriguing titled “cod feast” (£8.50), with the Spaniards (along with their Iberian cousins, the Portuguese) mad for salt cod. 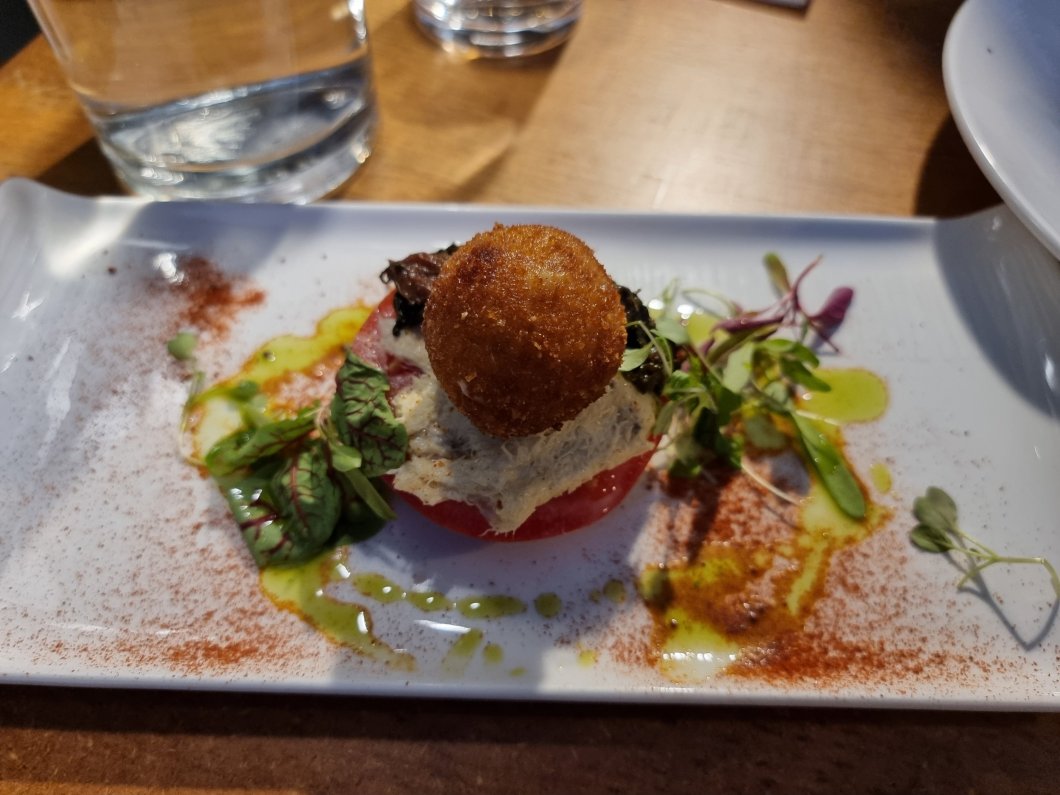 Here the salt cod came as a brandade in two distinct forms. A beautifully crisp brandade filled croquetta sat on a smooth pure form brandade, with both atop a juicy tomato.

Lovely dish this with the salting of cod always seeming to supercharge the flavour.

For once the garnish was worthy of its place on the dish, with interesting leaves bathed in a grassy olive oil dressing and a liberal sprinkling of paprika adding a nice piquency to the dish.

Two absolutely cracking starters of which I favoured the tomato and cecina dish and J the cod feast.

For the mains both J and I were drawn to the lamb shoulder (mountain lamb from Aragon, an area that is rightly famed in Spain for its lamb) sharing dish (£23.50 each) and boy were we right in choosing it.

Absolute behemoth of a dish, with a massive piece of lamb and an abundances of veggies 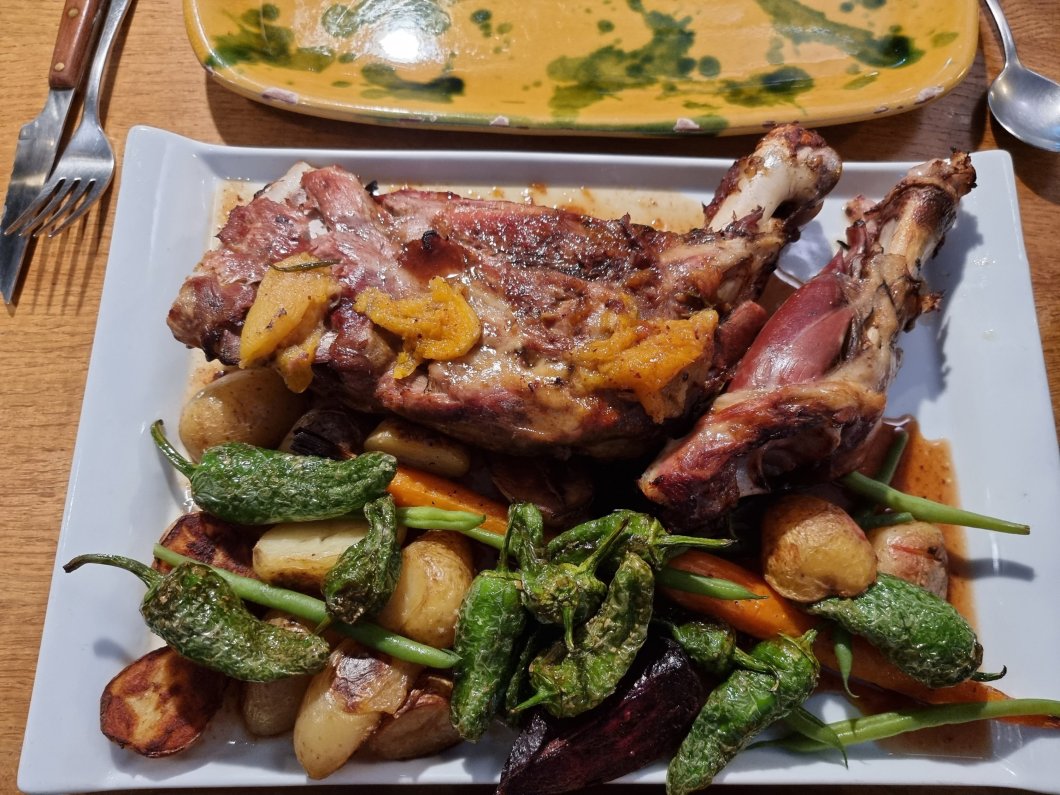 The slow cooked lamb was spoon tender, easily being pried away from the bones, but with plenty of gnarly crispy fatty bits. Heady with rosemary, the seasoning was bang on. This was a seriously good bit of meat that just sang with flavour. 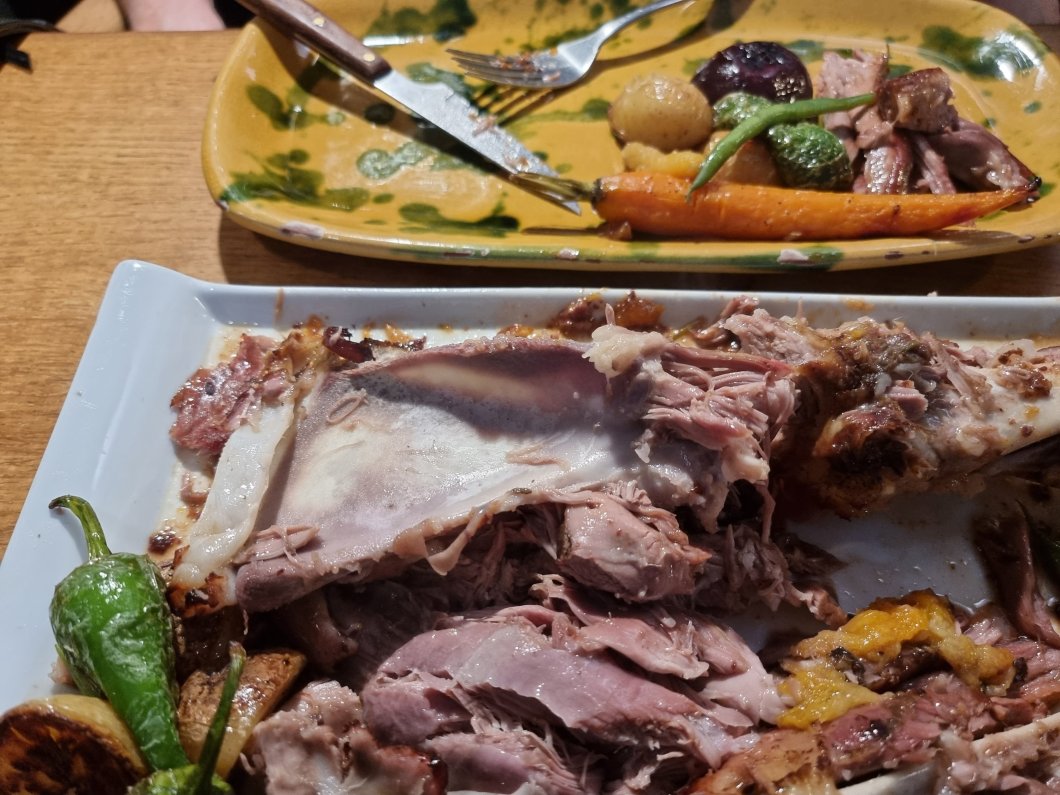 The veggies were equally as good, with well blistered padron peppers (still haven’t had a hot one), crisp roasted new potatoes, squeaky green beans and sweet roasted carrots. All of it sat in a bob on lamb jus.

One item on the plate that went unidentified was the orange smears on top of the lamb, which had an almost fruity sweetness. Very nice whatever they were.

This was proper trencherman food, with an abundance of quantity and quality on display. This dish is going to take some beating, in my yearly round up, in terms of my meat dish of the year.

As Catalonia abuts the French border to the North, we decided to go French by way of inserting a cheese course between the main and the dessert. Always thought this a much better placement of cheese than after the dessert course.

Fine looking cheese plate (£10), with a nice mix of soft and hard – couldn’t tell you what they were but would hazard a guess at a bauma carrat, a nevat, an aged manchego – not sure about the orange one (was very nice). 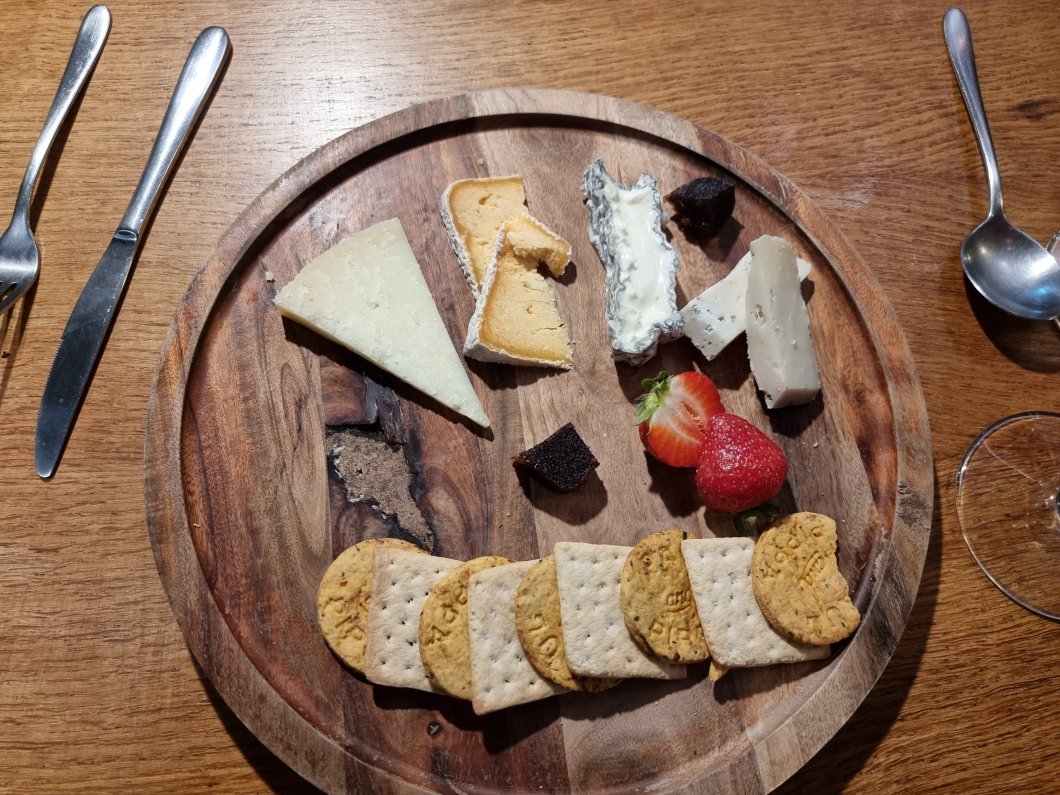 A decent amount of quality crackers, including a really good tomato one, and membrello (quince jam) made for a very good cheese board.

Moving on to desserts, I forgot to take a picture of the menu, but I recall chocolate mousse and flan (we know it as creme catalan). I fancied the flan, but J has a phobia of jelly (I know, bloody weirdo) and flan apparently is to close (wobble wise) to the mark not to give her the hibbie jibbies.

We, therefore, agreed on the “summer fruits” – thinking it would be more refreshing than a chocolate based dessert (baring in mind the amount we had eaten that this point).

Good choice this, with sweet strawberries (personally would have preferred them with the green tops taken off) and cooked down (possibly in booze) peaches and a lovely syup 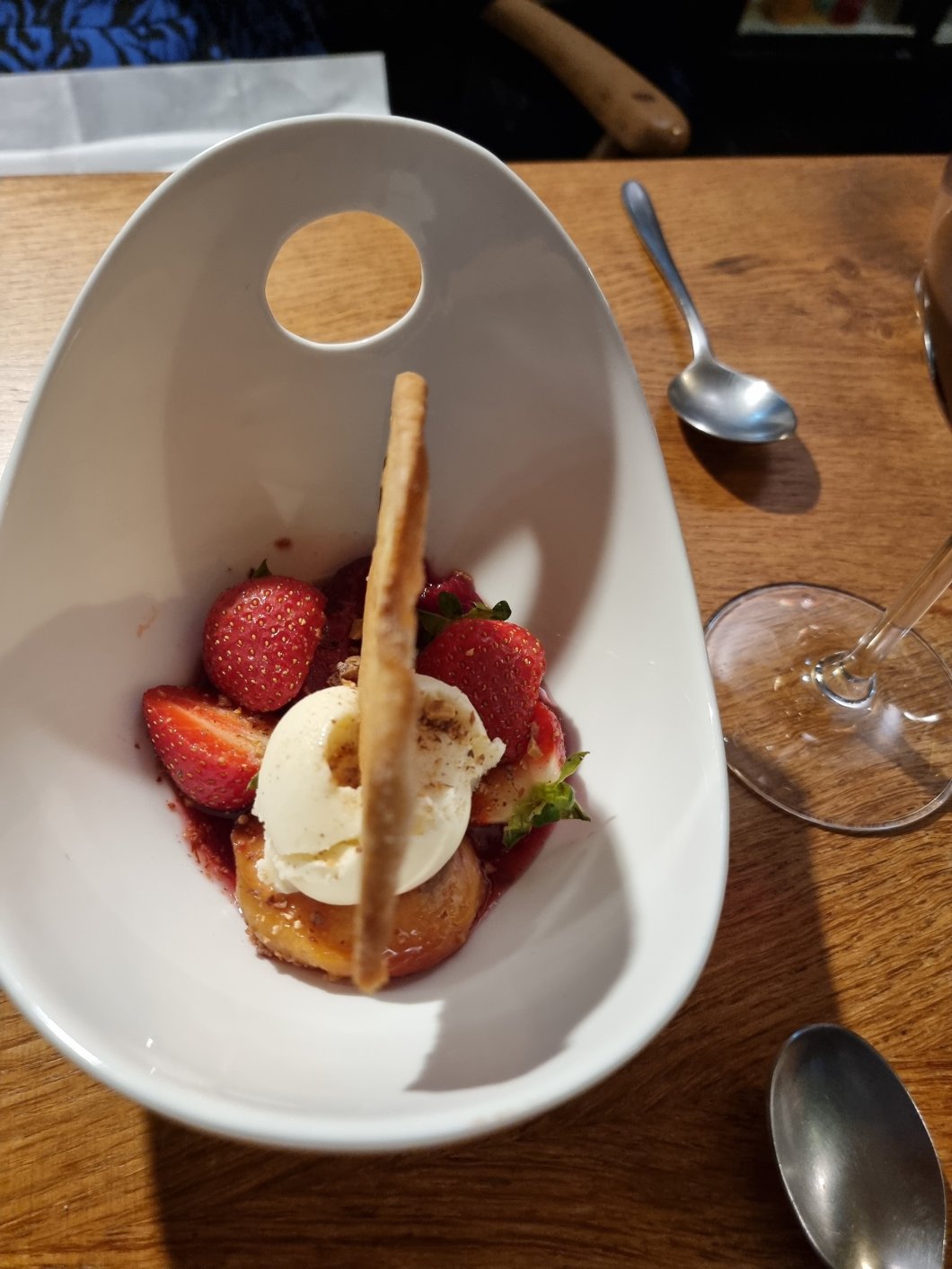 Ice cream (we asked to substitute the advertised vegan one for actual ice cream) added nicely to the mix, as did the inspired inclusion of a tortas de aceite. The latter brought a lovely aniseed hit to proceedings.

As mentioned at the start Catalonia has an abundance of richness on the vinous front and the list here is rather good. 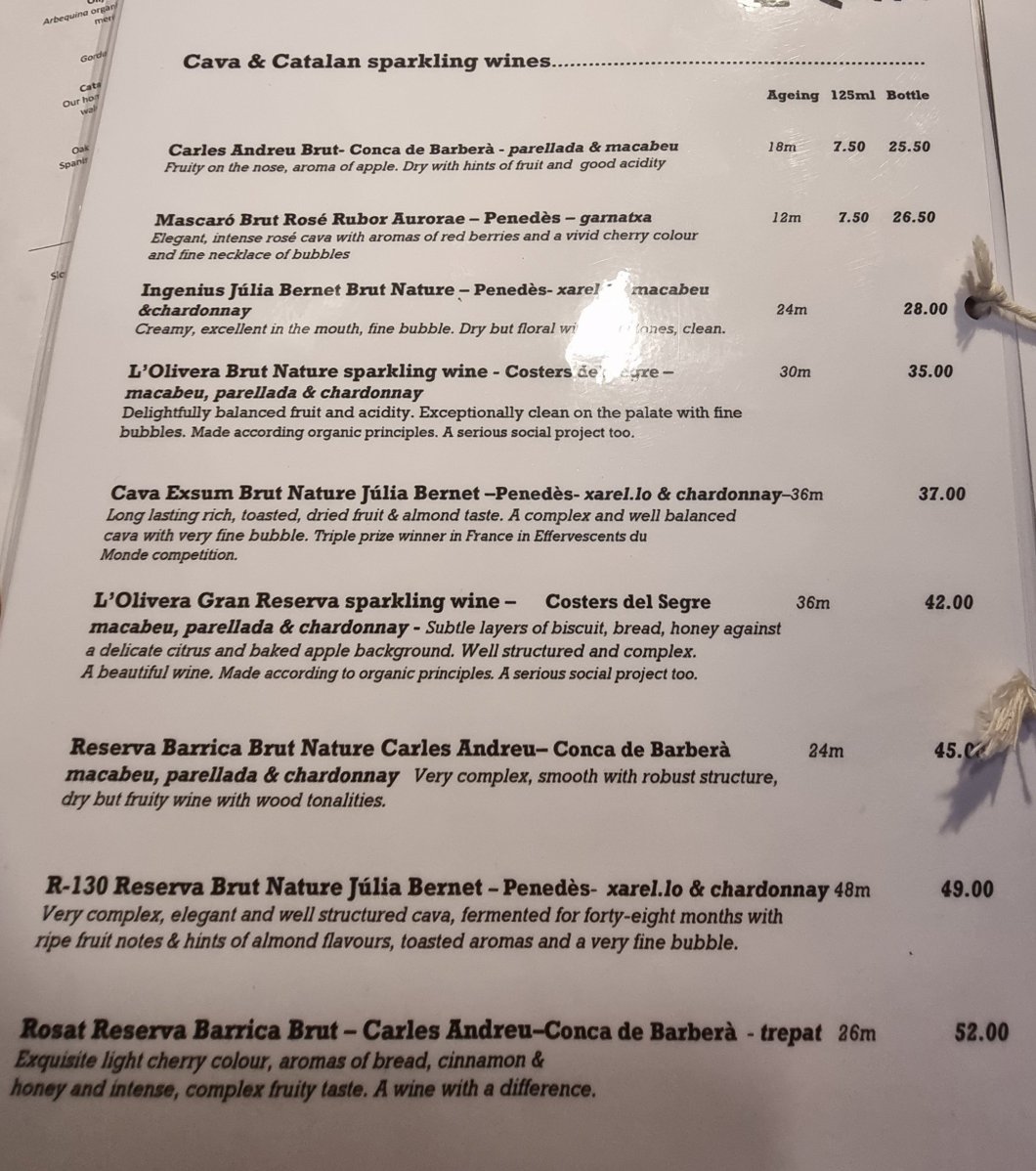 as well as wines by the glass wines.

Nice to see a couple of sherries on the list, but why the measly 75ml pour? To me dry sherries (particularly finos and manzanillas) should be treated like any other still wine and thus should be served in a minimum 100ml (and ideally 125ml) pour. 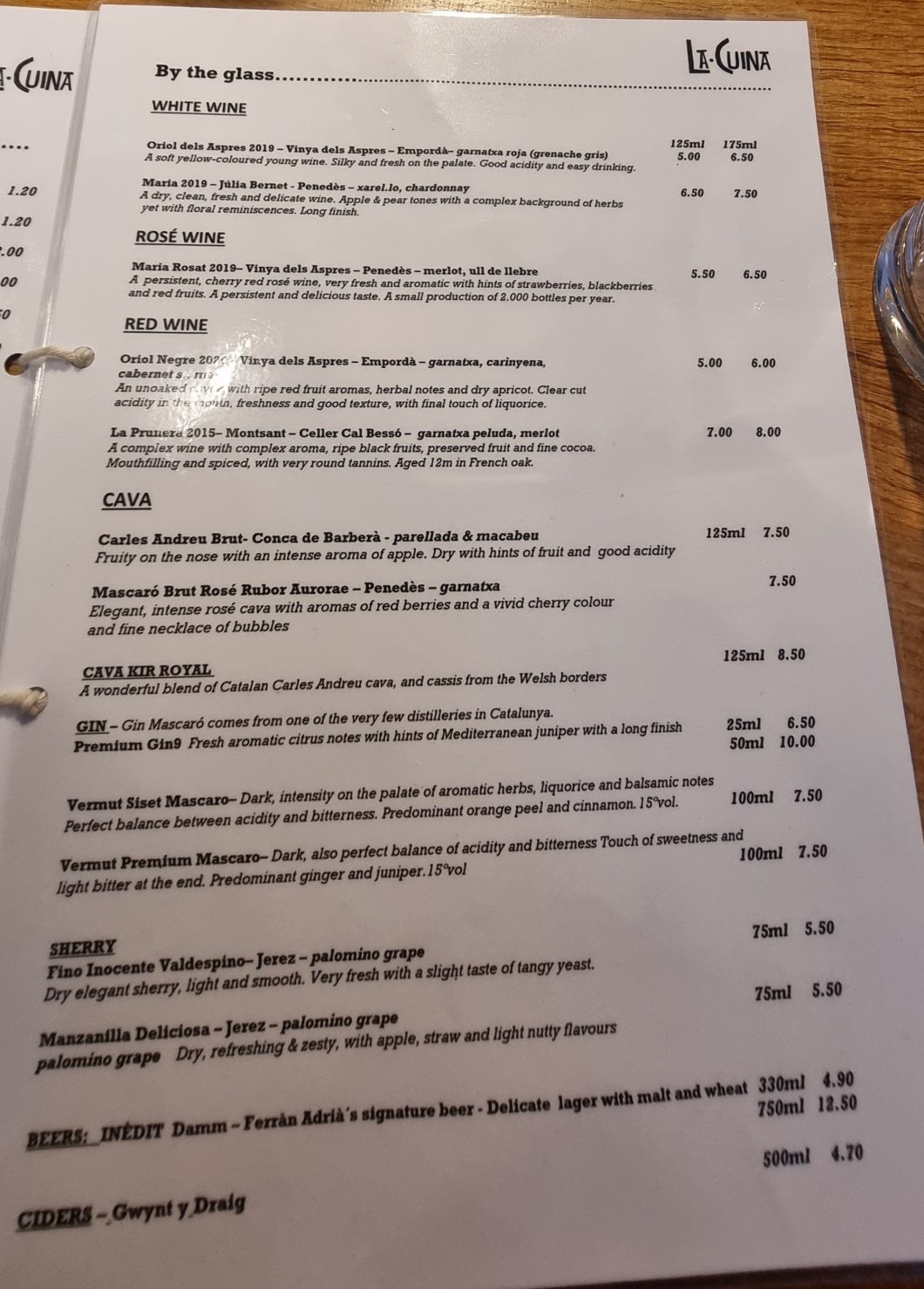 Some may argue that the measly pour is justified because it is 15° plus, but the La Prunera on the list offered by the glass (125 ml and 175ml), is 15° so that argument simply doesn’t wash to my mind.

So brownie points for sherries being on the list, from a good producer in the form of Valdespino, but a fair few of those then lost due to the measly 75ml pour. £11 for a decent sized glass of sherry (if double up to get a 150 ml pour) also seems just a tad excessive to me when a 75cl bottle of the Manzanilla goes for £14.45 retail. 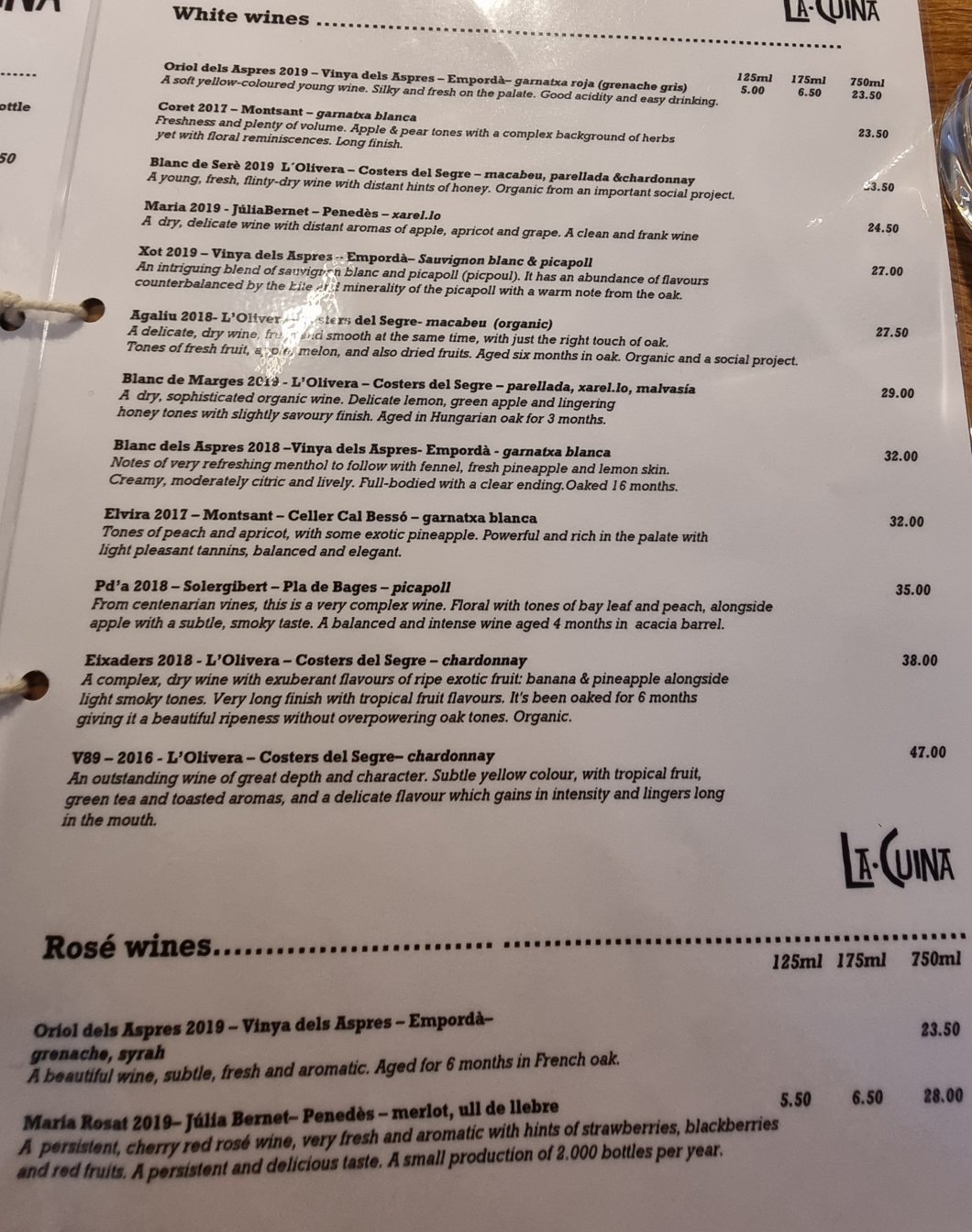 and the red fronts. 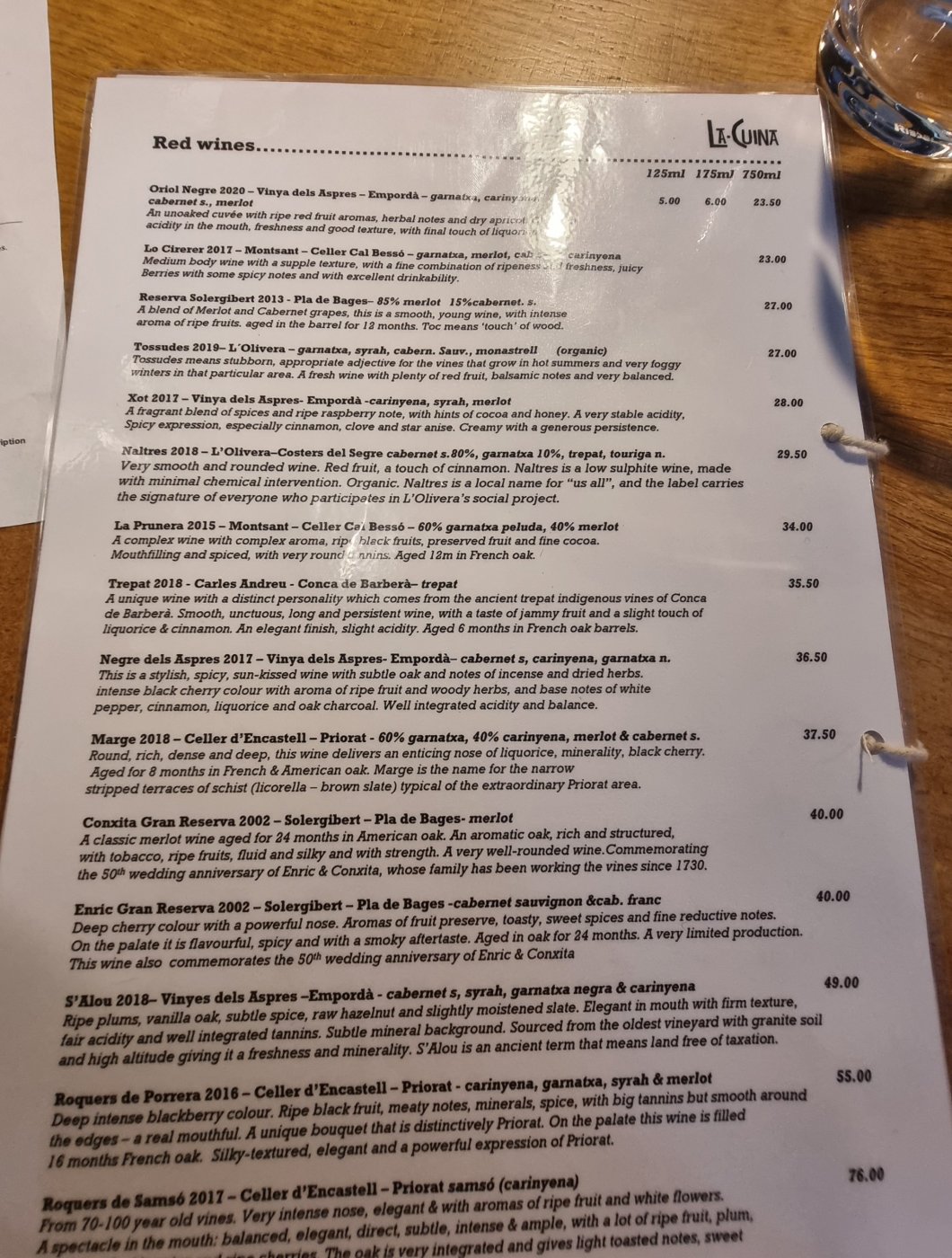 Lots of off the beaten track stuff to be had here.

We had a bottle of the La Prunera 2015 (£34 – retails at about £15) from the much underrated region of Montsant (which is often seen to play second fiddle to the Priorat DOC it pretty much surrounds). 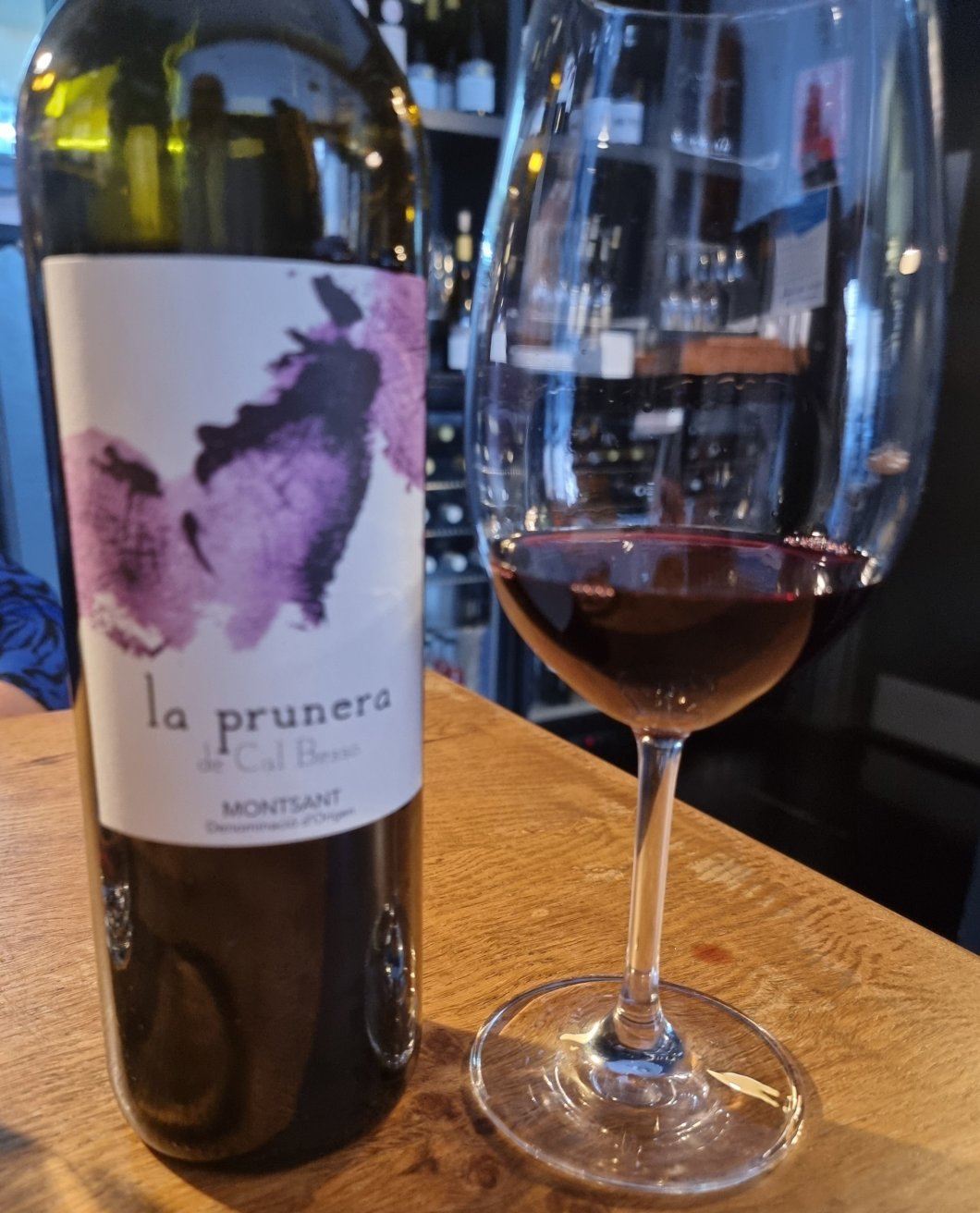 A blend of ” hairy” garnacha/grenache and carineña (carignan), this was a big hitter (as mentioned above) at 15°

It had a heady nose of dark cherry and herbs, whilst on the palate there was spice, licorice and dark fruit. It wore its “big boy” 15° rather well.

We also had a lighter number in the form of a Trepat (a native Catalan grape) 2018 from the little known Conca de Barbara wine region. 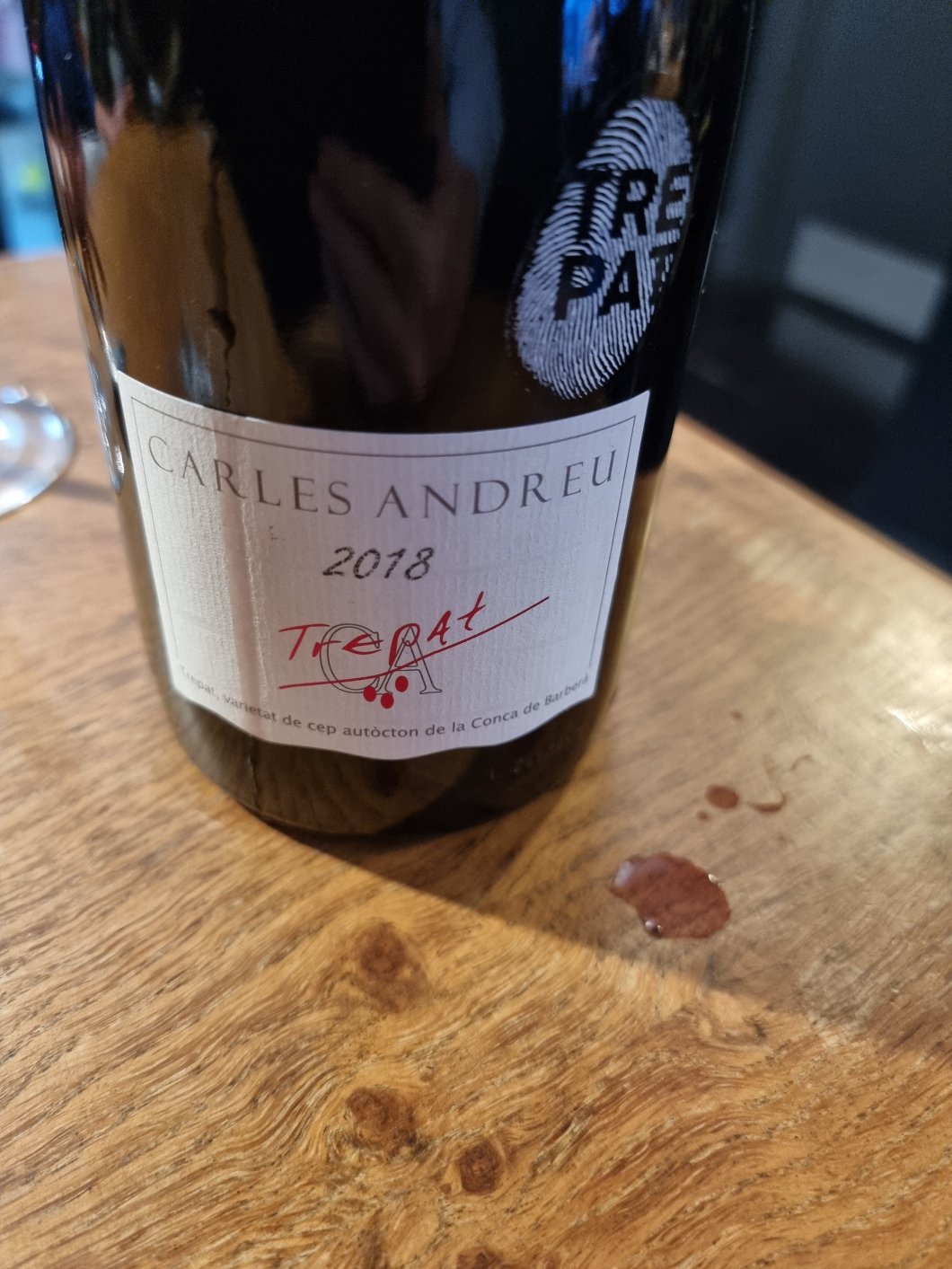 Nice red berry aromas, with a touch of the floral on the nose 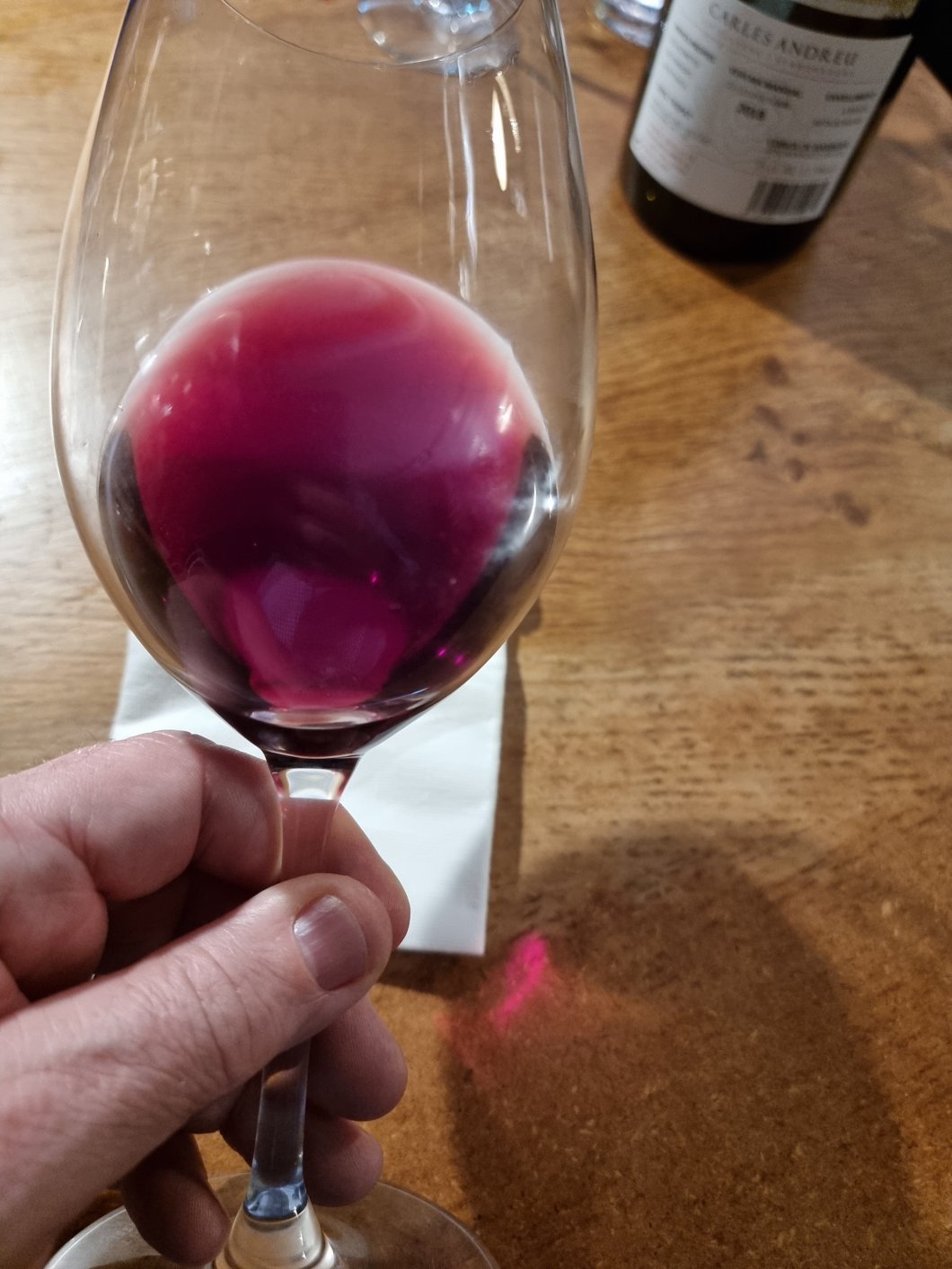 and fresh red fruits and a good level of refreshing acidity on the palate.

Possibly a bit pricey, at £35.50, as it seems to be cheaper retail (at around the £12 mark) than the La Prunera – which is a bit odd when compare it to the cheaper on the list but mire expensive retail La Prunera.

We had an excellent meal at La Cuina, which offers a delightful taste of Catalonia for us lucky Cardiffian. Very good on both the quality and quantity front, it certainly offers a true homage to the food and drink of Catalonia.

Bit of a hidden gem this, with all the stuff we had food and drink wise top notch.

You don’t hear much about this place on the grapevine (bar from the Plate Licked Clean, who admirably bangs the drum) and we really should, as it is an absolutely pearler of a restaurant.

Would I go back? Definitely – good food and good wine, what’s not to like?