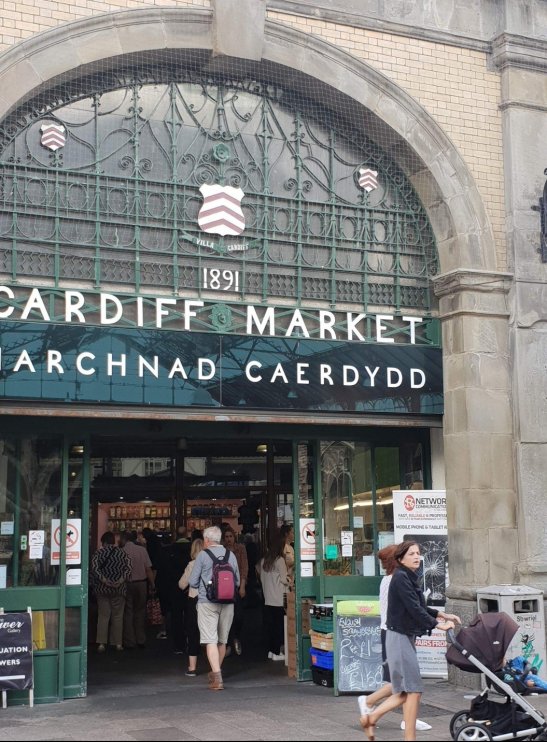 Cardiff Market’s transformation on the food front continues apace. With the likes of Cheese Pantry, Ffwrme and Milgi Market (in the new vanguard) and the more traditional Bull Terrier and Gallery Cafe (as well as Thai Fresh, Clancy’s etc) you are spoilt for choice of a lunch time.

As I am trying to buy much of my meat, fruit and vegetables, cheese, spices etc. locally, from independents rather than shopping at the supermarkets, this is good news as I am often in the market of a week day lunchtime picking up supplies (little and often, which also help with the daily steps count, gets my arse away from my desk and actually seems to save me money).

To add to this profusion of places in the market is a new one (opened in January) called Sage Deli (on a site that use to be a fruit and veg stall – if my memory serves me well).

It operates on both a take out and eat in basis 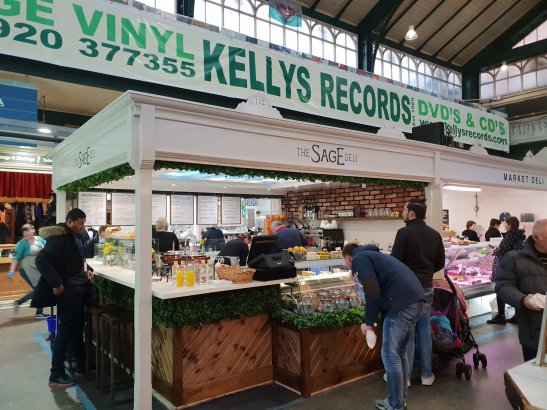 with stools and a counter on two of its 3 sides for eat in. Great if you have bags of shopping

Nice looking set up, with all mod cons and some very friendly staff.

On the food front the star attraction for me is their toasted sandwiches,

with the offering looking pretty promising (at least at first sight). Who isn’t a fan of a good Cubano (needs to be in proper Cuban bread mind), a Rueben or (my favourite and choice on my initial visit) a Philly (cheesesteak).

Here it came with mushrooms and Swiss cheese in a sandwich rather than roll format, which to my mind makes it more a steak sandwich (albeit with knobs on) than a Philly cheesesteak. Nonetheless, I thought it a fine looking beast for the “eat in” price tag of £5.50. 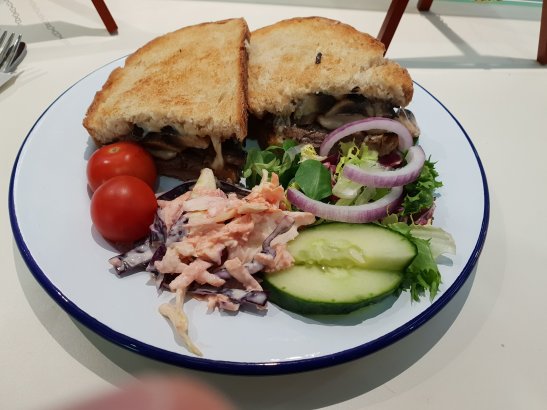 The bread was nicely toasted, so it had bit of a crunch on the exterior but also a nicely yielding interior with a bit of chew to it.

The steak was cut a little thick for a Philly cheesesteak but was nicely cooked (touch over, perhaps, for my bloodthirsty tastes), well seasoned and beautifully tender (this meant you didn’t get the “steak dragged out of the sarnie” issue). Most importantly it had a good flavour to it. The mushroom were also properly cooked (in butter I think), well seasoned and had a nice earthiness to them. Finally the cheese had a pleasing gooiness to it. It was cooked to order on a stove and then toasted, with the resultant nice smells waiting around adding to the expectation.

The only slight quibble (bar from it not really qualifying as a Philly Cheesesteak) was the side salad.

Whilst the coleslaw was good (crisp and not too mayo heavy), the rest of it was undressed and the tomatoes would have been better halved or quartered.

Shame that, as it would have been a very decent side salad if it had been dressed.

On a subsequent visit I ordered the Reuben. 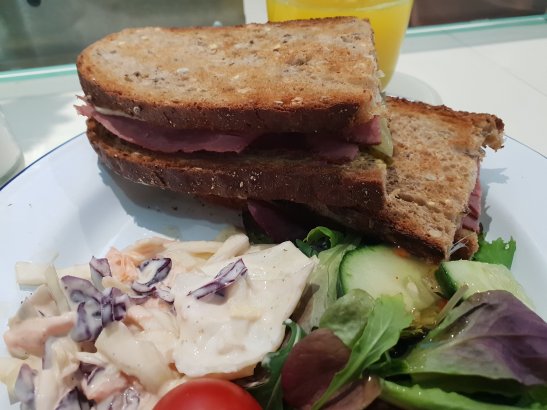 Not, in my view, actually a Reuben as it used pastrami rather than salt beef and there was no sauerkraut (this makes it more a Rachel, than a Reuben, although that would require the addition of coleslaw) or Russian dressing. I suppose it could be named, on that basis, an “undressed Rachel”!

Notwithstanding this misnaming, there was good pastrami (bit more, perhaps, would have been nice) and gooey Swiss cheese, with a liberal dose of pickles and a good slather of Dijon mustard. What it lacked (and really needed) was a good dollop of sauerkraut or coleslaw in the sarnie itself (my suggestion is add one of these to the sarnie).

Not as good as the steak one, but nice enough nonetheless (really does need coleslaw or saurkraut in it to bump it up to the next level though). This time I asked for the side salad to be dressed and they were more than happy to oblige.

The wider menu offers traditional sarnies, which seem (at least to my mind) to be the weakest part of the offering.

They seem to have paired back the sandwich offer from the original default “assemble your own” option, which is a shame if the case.

Much better value are some very nice looking salads (£4 medium and £6 large I believe – even the former are a very decent size – prices have gone up since took photo below, thought were bit too good to be true).

On a third visit, I had a medium size chicken jerk salad which was very tasty, coming with lettuce and 4 other fillings (coleslaw, Bombay potatoes, roasted veg. and coconut and bean rice were my choices from a wide selection on offer) in addition to the chicken. 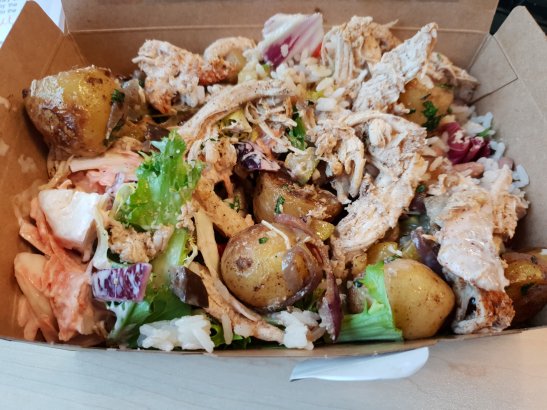 A very decent size, good flavours and excellent quality for the price I thought

The soups are also good and very reasonably priced for the size and fact that they come with a hunk of bread to dunk.

The leek and potato soup I had was a good size, nice and thick (rather than watery) and very tasty. It was quite filling for lunch and retained its heat even after a 10 min plus walk back to the office.

They finally have an interesting looking breakfast/brunch offering. 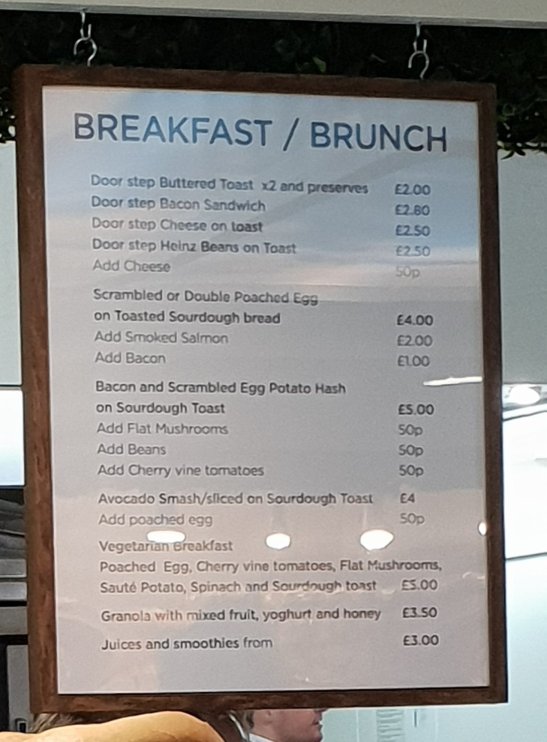 Bit more “up market” than the greasy spoon offerings elsewhere in the market and I quite like the sound of their “bacon and scrambled egg” hash on toast.

Drinks wise they have the usual suspects on the coffee front 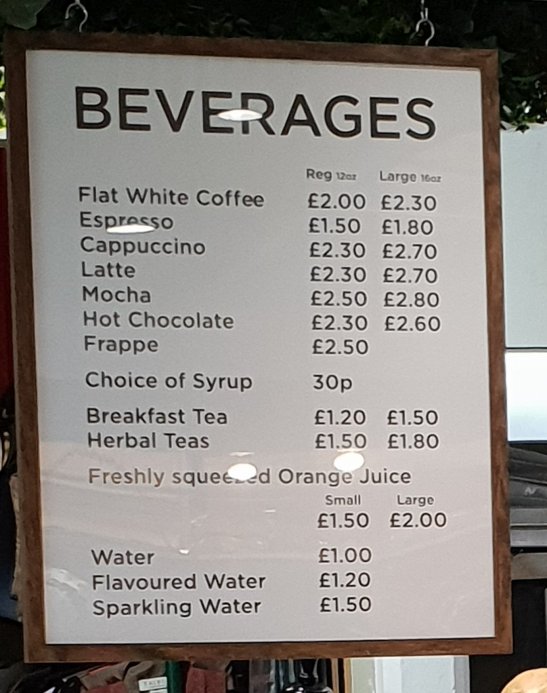 The small glass (£1.50) was a decent size and the juice a pleasing mix of sweet and sharp

They also do the usual soda suspect 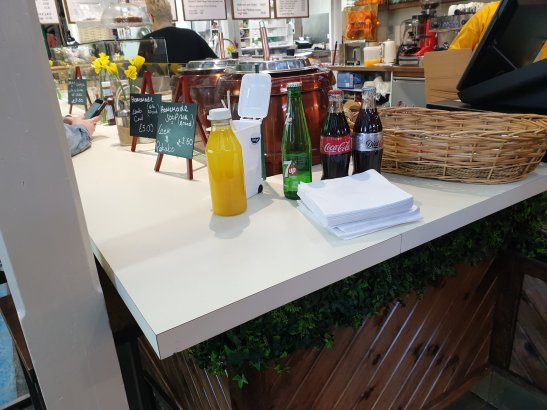 I was very happy with my Philly toasted sarnie at its £5.50 price. Whilst not a traditional one, it was light years ahead of the steak sarnie (a poor excuse for a Philly cheesesteak) I had at the Alchemist and far cheaper (the latter being £11.50 with fries).

I think this is a good addition to the market and hope they continue with the quality. This place is definitely in the top end of this segment of the lunch time market, along with the likes of Bombers, New York Deli, Fresh and Quay Street Kitchen.

Would I go back? Absolutely – nice little place that continues the market’s upward trajectory on the eat in and take out food front.