Heard of the wines of the Sierra de Gredos? No, thought not (if you have, give yourself a pat on the back you clever clogs). I like to think I am reasonably well versed on the wines of Spain, but I have only a vague knowledge of this area and the wines it produces let alone a working knowledge of them

Nestled to the west of Madrid (a couple of hours drive), the South West of Avila and the South East of Salamanca, 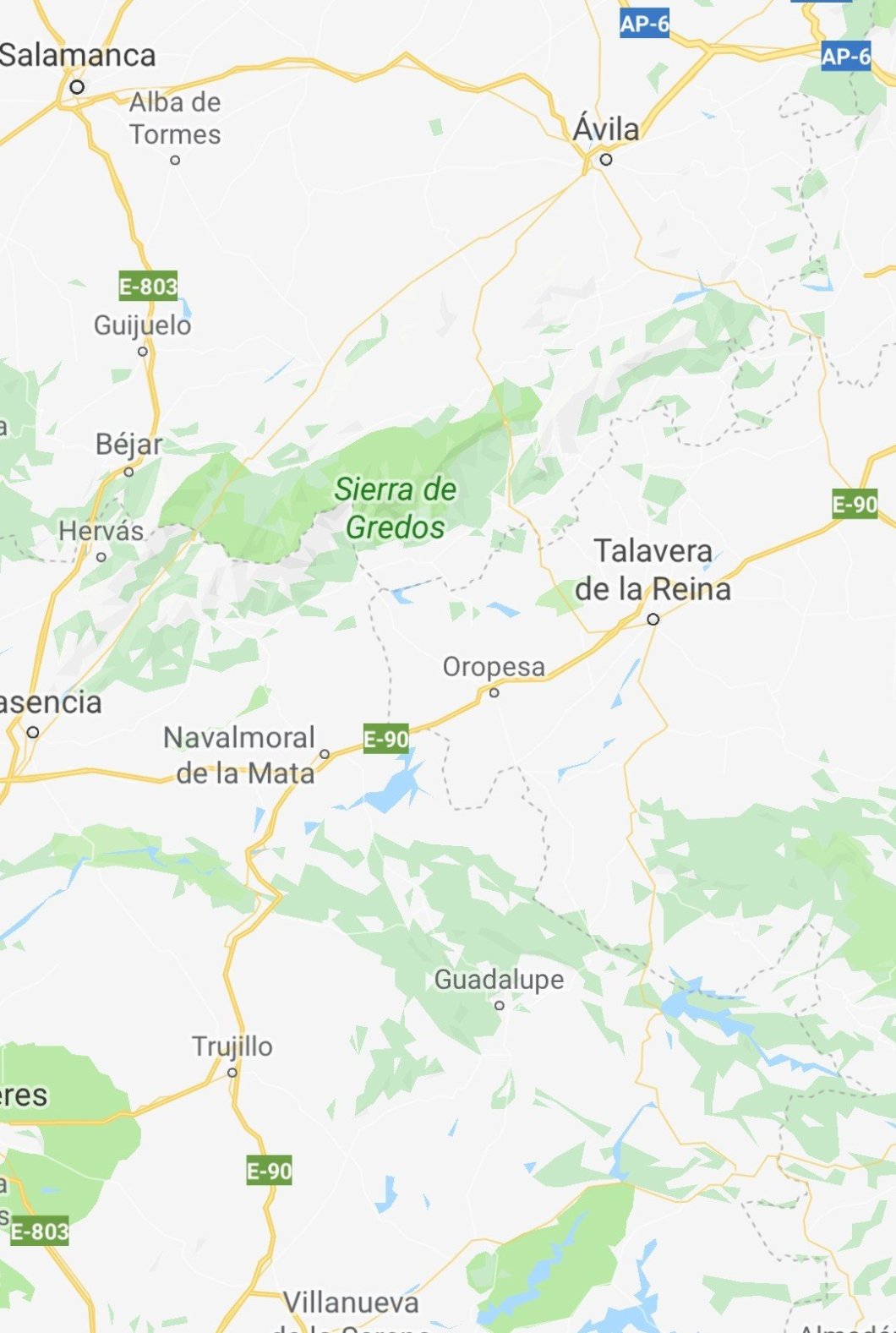 it is a range of mountains (I have seen reference to Spain being the second most mountainous country in Europe after Switzerland, but I don’t think this can be correct on most valid metrics – it is none the less surprisingly mountainous) that splits the Spanish eastern central plateau in two.

It is an area little known in every sense (outside and arguably inside Spain), but with its highest peak, Pico Almanzor, being nigh on 8,500 ft (Ben Nevis is a mere 4,413 ft) it is not an inconsequential range and as a result has its own distinct climate. I have heard tell that even if you visit the region in July you may be shivering (in sharp contrast to the sun baked plains in Spain at that time of the year).

The main grapes grown are garnacha (red) and albilla real (white), with me being led to believe that the garnacha wines here are a world away from those brooding beasts of Priorat. The few commentators that mention the wines here, talk of almost pinot noir qualities.

There is no specific DO for wines from the Sierra de Gredos (apparently the idea was mooted, but no one could agree as to a name) meaning the wines fall within either the:

The Sierra de Gredos area can be seen as atypical of each of these areas in terms of soil, elevation and climate. As such, the wines it produces are quite distinct from those generally from the above detailed wine areas.

I have never drunk wines from the Sierra de Gredos and, therefore, when I saw a Mystere Wine Club tasting on wines from this area I jumped at the chance of expanding my wine knowledge. Agreeing to lead the tasting (no one knew much about them, so we were all in the same boat), enabled me to bone up on both the region and the wines.

So to the wines.

A somewhat unusual name (and the link to the post title) for a winery, with it apparently coming from a 80s Japanese cartoon of the same name in Spain (it was called “Battle of the Planets” in the UK – a classic in my opinion) . The “G” in this case refers to both garnacha and Gredos.

Comando G was created in 2008 by two friends, Daniel Landi and Fernando Garcia, who are very much the Young Turks of the Spanish wine industry.

Both had strong links to the area and build up a small portfolio of sites (many high up and relatively inaccessible) in the Sierra de Gredos. The vineyards operate on an organic and biodynamic basis with small levels of production.

Wines are classified in line with Burgundian principles, with a ” village”, ” Premier Cru” and ” Grand Cru” wines.

This is Comando G’s “village” wine, made from grapes harvested from vineyards surrounding the village of Rozas de Puerto Real. Elevation of these vineyards is around 850 metres (not far off the height of Pen Y Fan in the Breacon Beacons). It is 100% garnacha from vines of between 50 – 80 years and the wine is aged in (French) oak barrels for 9 months.

Light colour to this wine, with a herbal, perfumed, nose. On the palate there were some quite tight tannins and light red fruit (raspberry), with a refreshing touch of acidity. Nice wine, but a bit tight. Will it develop further with age? Not sure, but good price for what it is.

In theory a step up in class from the “village”, with grapes sourced from vineyards (5 hectares in total) of a slightly higher elevation (900 metres), with vines of a lesser age (50 – 60 years). Time in (French) oak barrels is 12 months.

Same light colour as its little brother, but a very different character. On the nose there were distinct woody notes and sweet raspberry (my notes had fruit salad – as in the penny chew sweet). On the palate the tannins were there, but on a much more integrated basis than the previous wine. Really nice red berry fruit flavours (raspberry and redcurrant) and a more pronounced minerality. Great length to this wine and definitely one to savour. It was my personal favourite of the night and is at a good price too.

This bodegas was founded back in 1963, but up until 2004 it was primarily a supplier to bulk producers. In 2004 the current “fine” wine incarnation began with a focus on small scale organic (18 ha) and biodynamic (2 ha) farming methods. Vineyards are located predominately around the town/village of El Real de Vicente at an elevation between the 550 to 650 metre mark

Daniel Jimenez Landi of Comando G use to be the chief wine maker (it is his family’s estate), but he left in 2012. It was, therefore, interesting to see how the younger vintages (without his influence) compared to the older ones and the Comando G wines (with it).

Another 100% garnacha wine (for 60 year old vines and aged for 20 months in French oak), which at first blush seemed promising. The nose was initially earthy, with cardamon notes, but then came the, quite pungent, nail varnish remover (a little whiff is ok to my mind, but here it overpowered a bit suggesting a volatile acidity – VA – issue with this wine).

On the palate, it was disappointing with a quite harsh feel to it in the mouth and a rather odd brininess (past any minerality). I described it as a “cats fighting in a bag” wine with all the component parts seeming to be in conflict with each other.

Perhaps it was too young (and its disparate parts will meld together given time) or maybe there was a fault (on top of the VA) with this wine? Currently it seems to me to be trying too hard and my “on the night notes” had “harsh finish” in capitals. Easily my lowest scoring wine of the night (and the only wine which didn’t score a top three finish with any of the club members). Disappointing for the price.

The only wine in the tasting that was a blend (rather than 100% garnacha), with it having 30% syrah (from 12 year old vines) as against 70% garnacha (from 45 year old vines). It is aged for 11 months in lightly toasted foudre barrels.

On the nose this still had a quite young feel to it, with dark hedgerow fruits (blackberry) to the fore. To me the syrah dominated and the ripe, black, fruitness made it feel more like a ” New World” shiraz than an “Old World” syrah to me. This surprised me a bit as I was expecting that element of this wine to be more akin to a Rhone valley syrah.

Nice, but not what I was expecting from this area, with it seemingly a more commercial/international style wine than the rest. Decent price though I thought.

Back to 100% garnacha, this wine had a really “BIG” nose. There was a massive hit of anise, which was verging on the blackjack. There was also a pleasing herby (lavender) backnote. If you like aniseed this smell is heavenly, if you don’t it is hell. Luckily I love aniseed, so this wine was very much up my street.

On the palate, it was more restrained with a velvety smooth spiciness and a pleasant toastiness (it is aged in French oak for 15 months). Great refreshing acidity to this wine, which made it very moorish. I really liked this wine (I scored it the same as my 3rd place wine, but it just didn’t quite make the cut for my top three).

This winery is Daniel Jimenez Landi’s (the person who seems to turn up everywhere in the Sierra de Gredos – which seems to be very much “Landi land”) own personal project and is made up of a patchwork of plots that he got when he left Bodegas Jimenez-Landi and those he has, since then, picked up. All these vineyards are centred around the town/village of El Real de San Vincente and range from between 800m and 1000m in terms of elevation (talking about elevation of not much less than Snowdon) and 60 – 80 year old vines.

This translate from Spanish as “The Grapes of Wrath” and is the winery’s entry level wine (and a bloody good one at that). It is made from 100% garnacha from 60 year old wines and is aged for 12 months in foudre barrels.

On the nose it was a bit funky to start, with almost a touch of cauliflower/brassica to it. Disconcerting, but the funk passed quickly and gave way to really rather nice raspberry, almost a raspberry ripple effect, with a touch of caramel in the mix.

On the palate it was silky smooth with lovely red fruits to the fore and a very refreshing level of acidity. 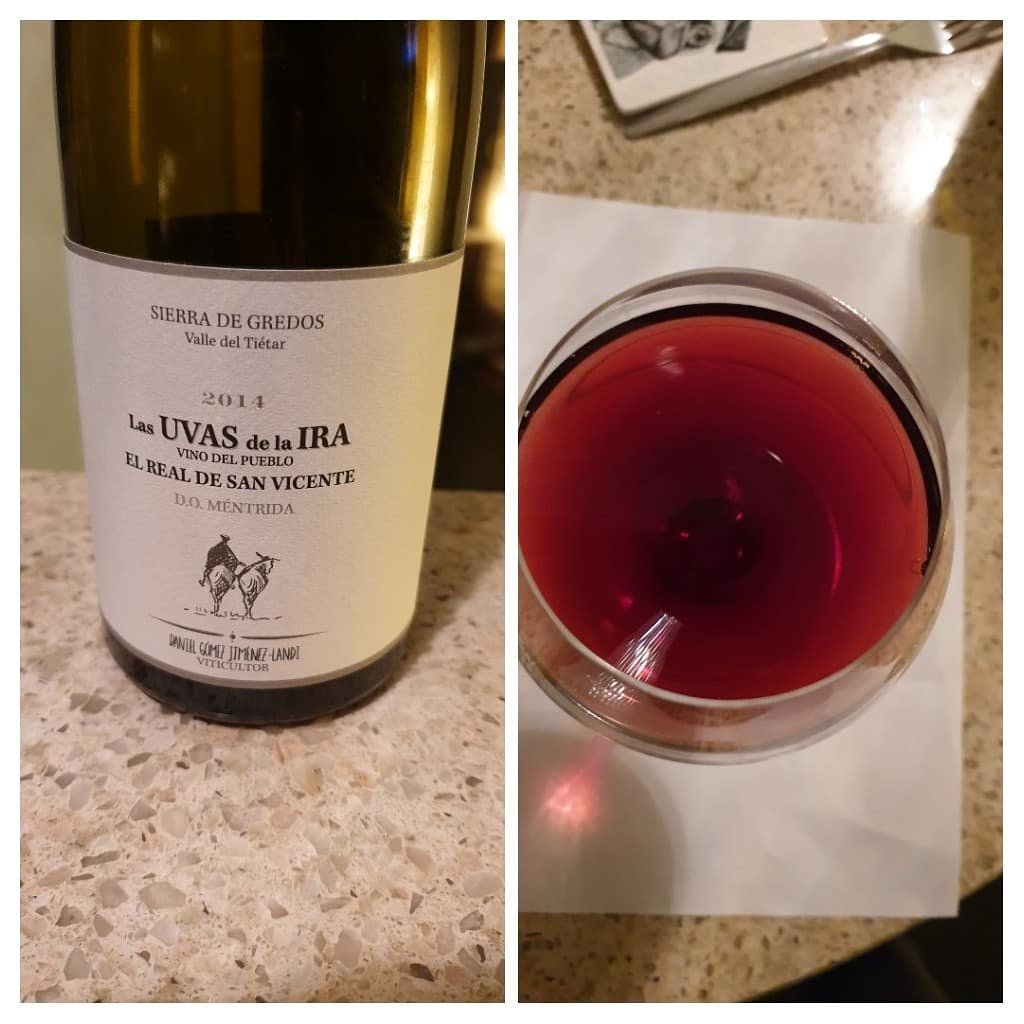 Even better the next day I thought, with the red fruit really coming through and it having a really engaging velvety feel in the mouth. Quite an elegant wine and a bargain at the price. This is definitely one to go on my “to buy” list.

Miniscule production of this wine in this vintage, with a mere 396 bottles and 12 magnum made.

So rare as hen’s teeth stuff.

On the nose there was wood smoke and spice (vanilla), with oak (it is aged in French oak for 12 months) in definitely in the mix. On the palate, I initially got red fruit (strawberry and raspberry), but it felt a touch “hot” to me and as it lingered more raisined/stewed fruit came to the fore. More interesting than pleasurable to drink, this was my second lowest scoring wine of the tasting.

This earlier vintage was much more to my liking than the 2013, with a lovely sweet nose. There were rather fine aromas of red (cherry) fruit, herbs (rosemary), singed meat, cigar box and just a touch of acetone.

On the palate, it had a lovely fresh fruitiness and a nice slake of minerality that made for a very satisfying savory wine. I scored this the same as the Pielago, but it just shaded that wine to get into my top three.

Some really interesting wines and certainly an expression of garnacha that is very different to that found elsewhere in Spain.

Bit of a mixed bag, with the best examples from the tasting being, top notch, really elegant wines. The lower scoring ones, however, seemed to me to be a bit confused. I thought where these wines moved away from the Sierra de Gredos style, to a more international one, was when they tended to impress the least.

Wine of the night for me, based on both quality and value, was the Daniel Landi “Las Uvas de La Iras” 2014. Fantastic wine for the £17 price tag. Will definitely be buying some of this in the near future.

These wines are not that easy to find in the UK and production is small. As a result they tend to sell out quickly. Online retailers Vinissimus, Decantalo and Gourmet Hunters seem to stock most of them.

Mystere Wine Club tastings are held the first week of each month (currently at the Future Inn in Cardiff Bay). New members are always welcome with an annual membership fee and various prices for the tasting (depending on the wines)

Details of this years tasting schedule are below: 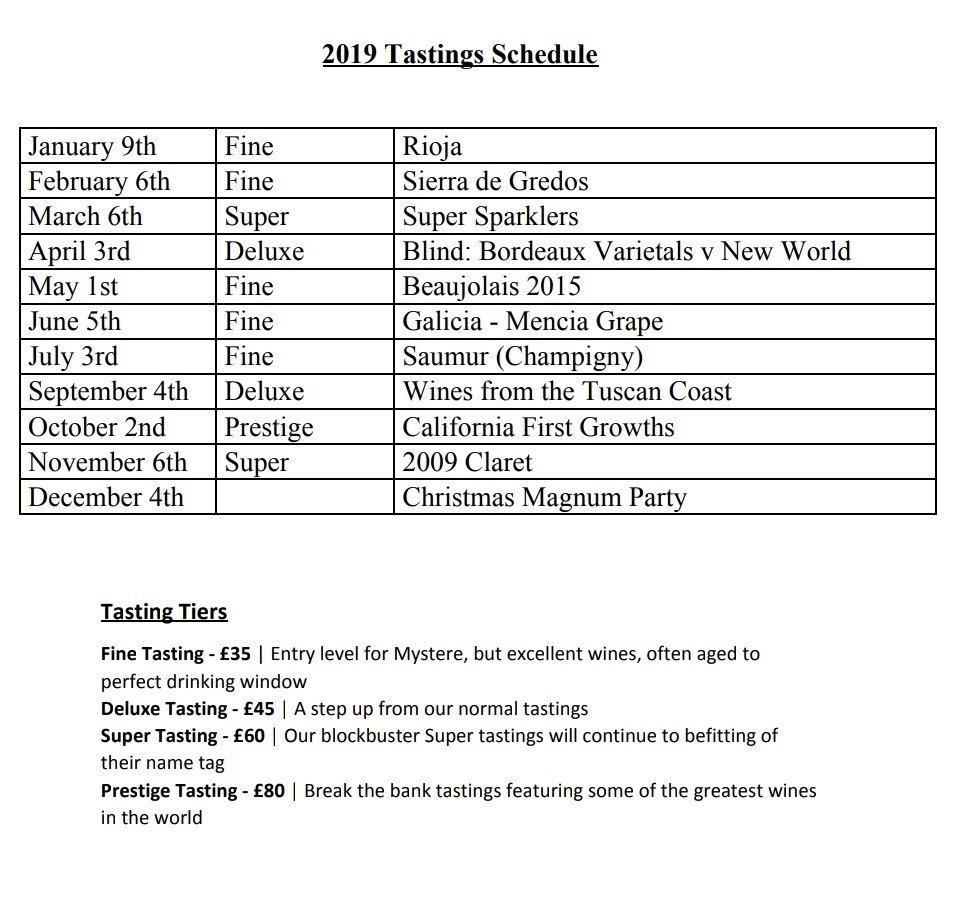 Looks like a good one (which regrettably I can’t make).