It is, to my mind at least, always nice to support independents in your home town/city. With increasingly identikit towns and cities it is the independents that operate to differentiate one place from another retail wise. Without them all you get is the same old chains in city after city and town after town across the UK.

Support for independents can come in many guises. It starts with actually going and spending your money in them (the simplest and best way to support them), but on top of that investing your hard earned cash (however modestly) into one is one of the most effective ways of helping (certainly to get them up and running).

Raising capital for any project involving a small enterprise can be the Devil’s own job and very expensive (if you can get it at all) if sourced from traditional lenders (i.e. the banks), but the somewhat in vogue method of raising funds is crowd funding. In effect this gets the likes of you and me to put in our hard earned cash in return (usually) for a predetermined benefit(s).

Cardiff brewer Crafty Devil used it to cover (at least some) of the costs involved in setting up Beelezebubs, a bar in the centre of town, and I was one of a number of people (quite a few as they smashed their target) who put in a modest sum (£50 in my case) in return for the benefit of a bar tab (mine was £50) and a 10% discount going forward. Seemed rather a good deal to me.

The chaps from Crafty Devil eventually plumped for the site where Small Bar was located (their original High Street choice of venue fell through, with Small Bar saying – as they were upping stumps – would Crafty Devil be interested in taking on the lease).

Being located in the centre of town it makes a handy lunch time or post work spot for me, especially with my tab and discount.

If I am honest I can’t see that that much has changed in terms of the decor, layout etc. of the old Small Bar to that of Beelzebubs.

I quite liked the old rustic feel and therefore am more than happy with the continuation of pretty much the old look. Seems like a proper pub/bar to me rather than some glorified gin palace and it is nice to have somewhere new open up in town that isn’t a cocktail bar! An excellent plus point for me is it is resolutely dog friendly. My two dogs love a good pub and will drag me into one (honest gov they do)!!

I was rather taken with the partnership between Small Bar and Keralan Karavan, which to my mind worked very well. My initial thought was it was a shame that Beelzebubs decided against continuing it, but it seems they wanted a new approach. One much more bar snack/the beer munchies based.

The menu is therefore rather different, offering what I would regard as “meet the munchies” food. Not gourmet food, but stuff that is intended to help soak up the beer.

It is most certainly a bar that does food, with the focus firmly on the booze.

Anyhow, at a loose end and with my bar tab available I thought I would try it one day.

Whilst tempted by the chicken bon bons and the Cajun corn fritters, I am a sucker for a good Philly cheese steak and was therefore drawn to the Philly cheese steak fries on the menu. At a not cheap £7.95, I was warned that it was quite big. As per usual I ignored the warning.

What arrived was (as per the ignored warning – when will I ever learn) enourmous and clearly intended for more than one person. I would say it is for a min. of two people, who are out for a bit of a session and needing some fuel.

A mound of sliced steak, with caramelised onions and peppers, was covered in a thick yet runny cheese sauce. This, in turn, all sat on a massive pile of fries.

If I am honest I didn’t come close to finishing it, but in terms of what I had I quite enjoyed it. The fries, not exposed to the cheese sauce, were nice and crisp on the exterior and fluffy in the interior (those under the cheese sauce where a bit soggy) and there was a good ratio of meat to onion and pepper (both nicely caramelised). They were also not stingy on the cheese sauce front, which had a nice tang to it.

All in all not bad at all, although I would have preferred the meat to have been a little less well done and perhaps a tad more thinly sliced.

The main issue for me was the size (hardly the place’s fault) of the plate of food presented to me. I am a pig but there was no way I could have eaten it all, especially as the longer it took me to plough through it the more the cheese sauce cooled and solidified.

By the end of my always doomed effort what was left looked like a failed ” Man v Food” challenge, with food very much the winner.

Moral of the story is don’t be a pig like me. If you order this do so with your mates and share it.

Looking at pictures on Twitter, the Welsh rarebit fries (£2.95) look much more manageable for one person (and also look pretty darn fine to boot).

Might be an idea to have a demi portion size of the Philly cheese steak and chilli cheese dishes – just a thought.

Can confirm that the Welsh Rarebit fries are a more manageable size for solo eating and delicious. 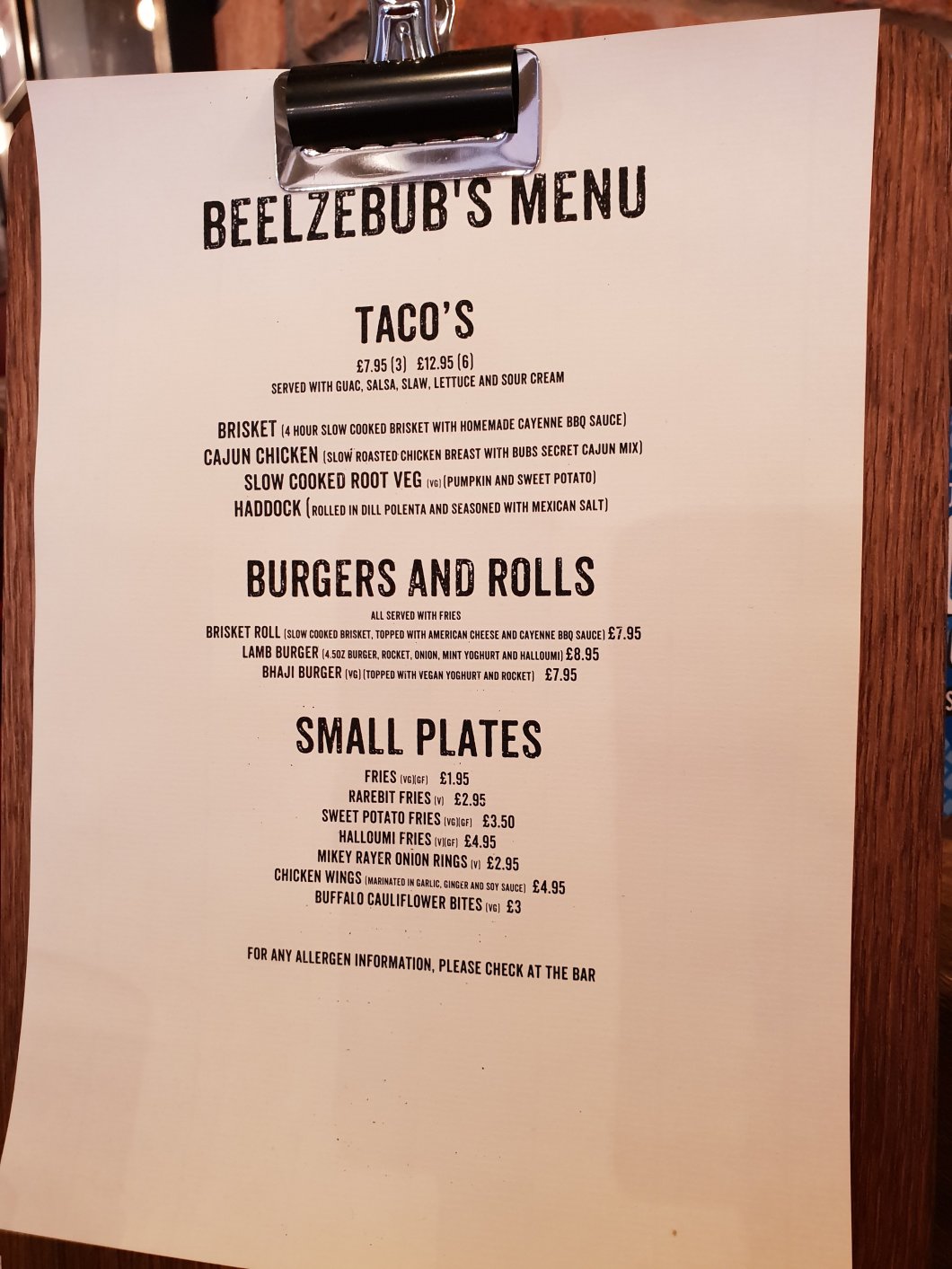 The lamb burger was very nice 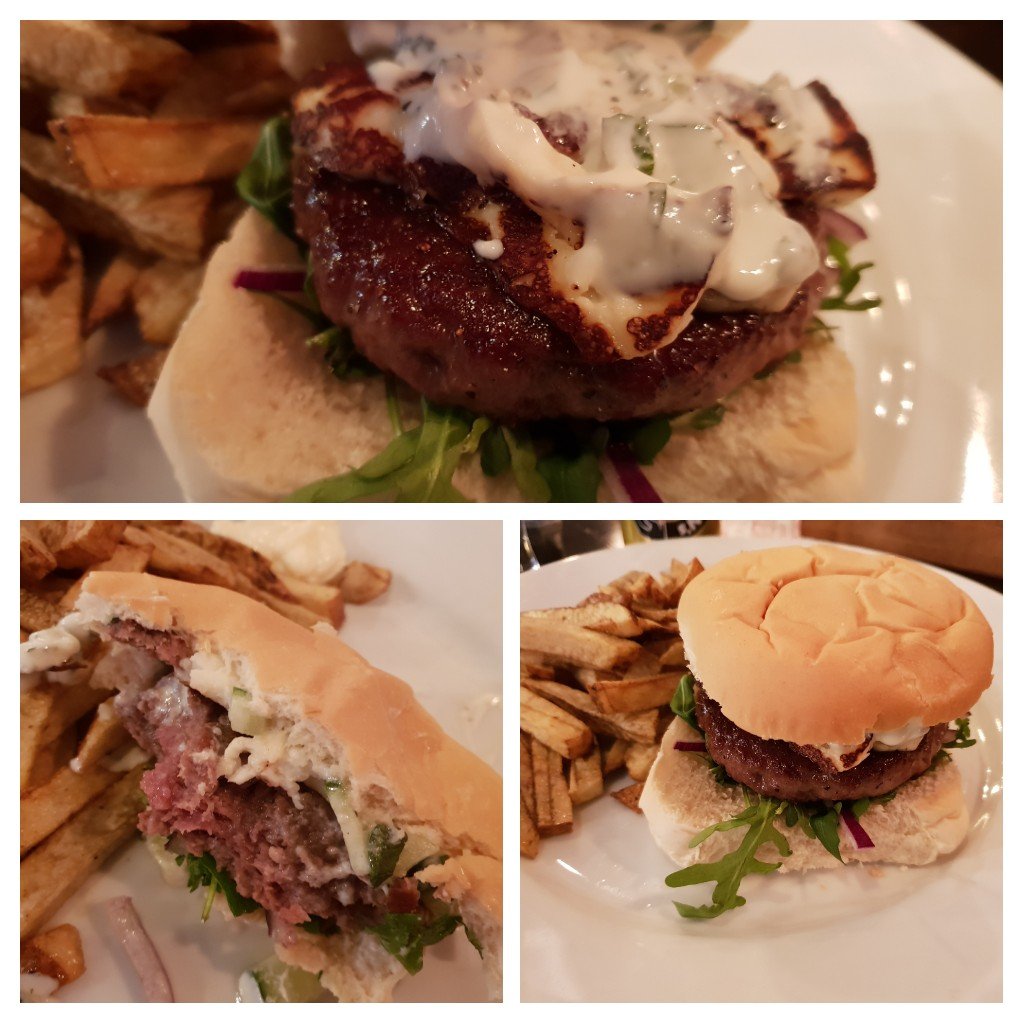 Good flavour and a pleasing hint of pink.

I am not a huge beer drinker (wine is more my bag), but I am not adverse to a decent glass of proper beer (rather than the utter phish that masquerades as lager, such a Foster, Heineken and their accursed ilk).

For proper beer lovers I would imagine this place is heavenly (rather defying its devilish name) based on the wide variety of beers on offer.

These include a full roster of Crafty Devil beers

and a very decent selection of beers from external producer.

Something to suit all beer lovers tastes I would assume. I really think I must try harder with proper beers. Sours sound up my street and I have always been quite partial to a stout.

At the time of this visit, I wanted something quite light and not too heavy on the alcohol front. On asking the very helpful bar staff, I was recommended either the Mikey Rayer All Dayer or Basket Case as fitting the bill. I went for the Basket Case.

Very pleasant easy drinking beer this, with aromas of citrus and a nice grapefruity hit on the palate, followed by some restrained hoppy bitterness. Not too fizzy, it was a pleasing clean tasting and refreshing brew. Perfect in the recent hot weather as a session beer and also to cut the richness of my Philly cheese steak fries.

On a later visit a pleasingly low alcohol G&T Gose 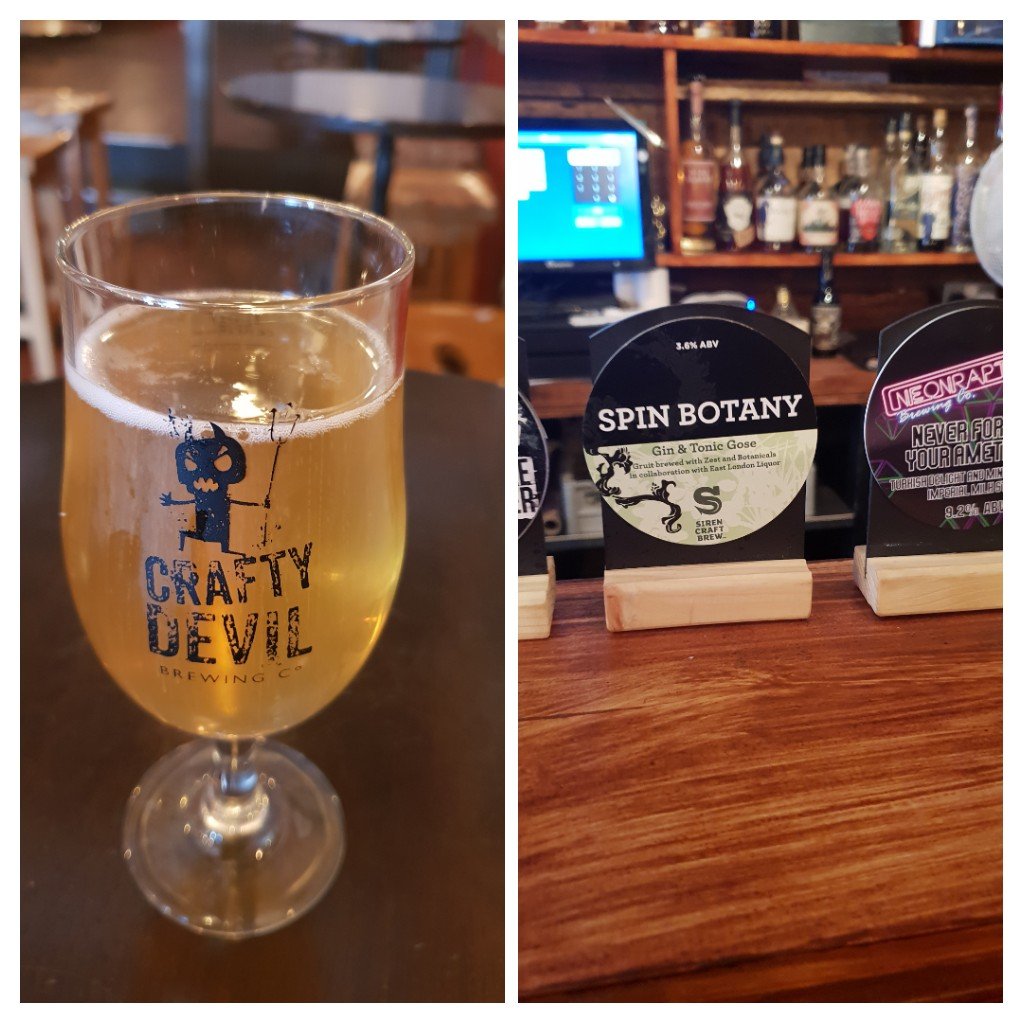 Soft drink wise they have a reasonable selection, in addition to the usual soda suspects. On one visit I have a very refreshing elderflower number.

I rather liked Beelzebubs, which feels to me like a proper boozer.

Nice selection of beers to suit all tastes and presumably enough to please the beer aficionados (I am not one of them being pretty much an ignoramus when it comes to the world of beer).

On the food front, I still think it is a shame that Keralan Karavan’s residency at Small Bar could not have been continued here. I suppose they wanted to stamp their own style on the place and perhaps more importantly don’t want to share the food revenues with a third party.

It is fair to say (at least I think it is) that food plays second fiddle to the booze here. This is a boozer rather than a gastro pub so that is hardly surprising and there is nothing wrong with that approach in my opinion.

What is on offer food wise is not going to set the Cardiff culinary scene on fire, but it is stuff that is perfect to wash down with a few proper beers.

Would I go back? Well I still have an in credit bar tab and a life long 10% discount so it is a no brainer really. Notwithstanding that, this place may well get me drinking more proper beer and whilst I am doing that it would be rude not to partake of something to help soak it up. Actually these days food with booze is pretty much an essential for an oldie like me, so this fits the bill nicely.

Fact that is is dog friendly very much seals the deal in terms of returning and I rather like the idea of walking into town with the doggies for Beelzebubs’ rather fine sounding Sunday lunch.