Some places you simply forget about. Eons back I was invited to the launch of Barley & Rye in Cardiff which, regrettably (as per seemingly usual) I couldn’t make. On looking at the menu, I thought it sounded rather nice and put it on the list of places to go to and then promptly forgot all about it (probably my age, but not helped by location).

It is, on Greyfriars Road, off my beaten track of a lunch time (I have in the past suggested to J we walk up there at lunch time, but she was having none of it) and I even more rarely venture up that way of an evening (particularly at the weekend where the presence of numerous bars and clubs makes it far to lively for an old git like me).

A positive review of the place’s offering in the evening by Gourmet Gorro back in 2016 re-ignited my interest in giving it a go at lunch time and then I again promptly forgot all about it. Friends then said it was worth a look and I promised myself I would make an effort to finally try the place out and I forgot about it yet again.

An arranged “welcome back” lunch for a work colleague, returning from mat. leave, gave me the opportunity to wander up that way to take a gander at long last.

Cardiff restaurants have increasingly recognised the benefits of a fixed price lunch menu (a thing the continent has been doing for donkey’s years with ths ” menu del dia” and “plat du jour”- gets the punters in on potentially otherwise slack times) and Barley & Rye is no exception with a £12.50 – 2 course and £14.50 – 3 course offering.

With Asador 44 doing a £10, £15 and £20 for 1/2/3 courses (including a rather fine dry aged steak, something that most fixed price menus only tend to include with an irritating supplement) lunch offer, the Classroom’s £12.95 – 2 course lunch and the Potted Pig with a 2 courses for £13 (to name but a few), there is plenty of decent opposition in the market in terms of a fixed price lunch in Cardiff.

So was Barley & Rye worth the wait?

Situated on Greyfriars it is fairly understated on the outside, but quite a nice space on the inside. 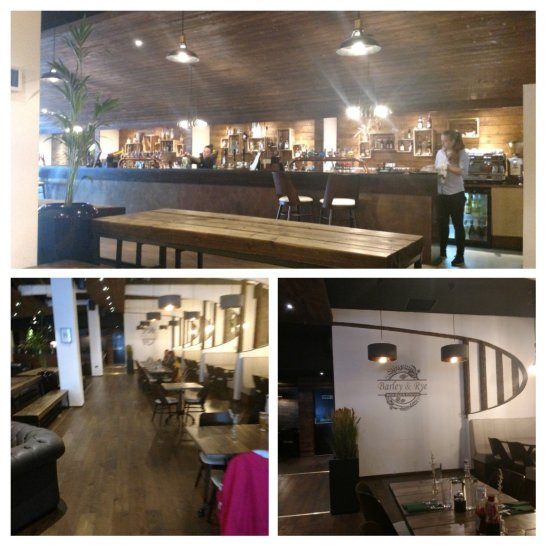 It was a team lunch with work so there were quite a few of us and they were one of the few places in the City centre that was able to accommodate all of us on one table (I think there was 16 of us in total).

It was disconcertingly empty on the Thursday lunchtime of our visit.

Whilst at lunch the wider menu is on offer, a tightwad like me was only ever going to go for the fixed price offer – even when the firm was paying (tightwadness is a habit that is hard to break it seems).

Not a bad selection in terms of what is available – something to suit all tastes (including veggie options). 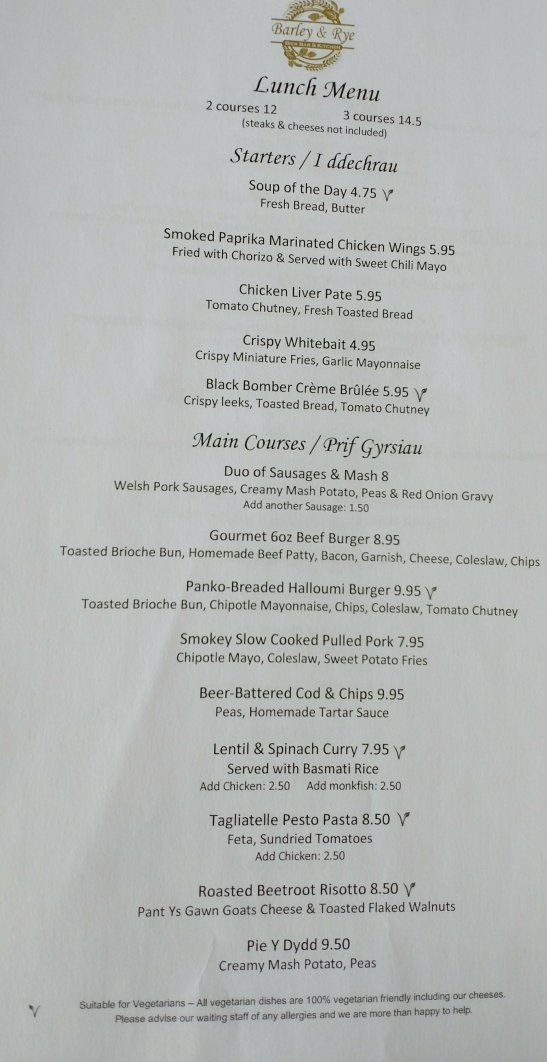 It good to see a statement that the cheeses used in the veggie dishes are veggie friendly (the parmesan used in the Caesar salad is not veggie, but nor is the dish as a whole so that is fair enough). 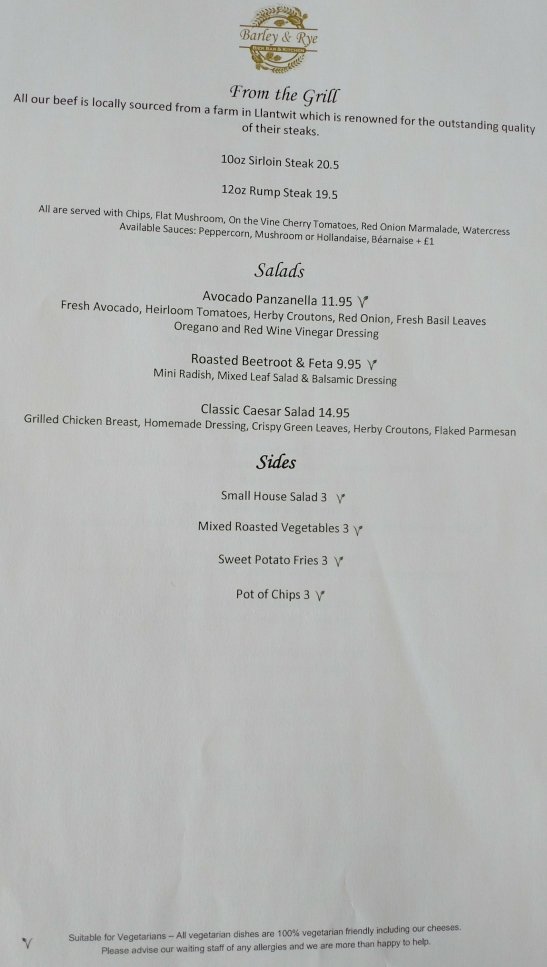 It was pleasing to see here no supplements at all in terms of the lunch time offer.

After toying with chicken liver pate (very partial to a good one and personally think my “Tuscan” chicken liver pâte is pretty darn good), I decided on the intriguing Black Bomber crème brûlée.

If I am honest I choose this more out of morbid curiosity as to what it would be like (my thoughts were “real potential train wreck”) than anything else, but was hoping to be pleasantly surprised.

What arrived can only be described as odd. The brûlée was exactly what it said on the tin 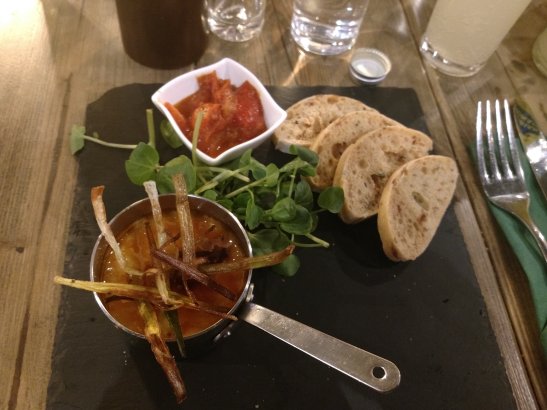 being a thick solid disc of caramel (I had hoped they would do a riff on a brûlée, with perhaps a parmesan tuile as the top bit- but that would make it non veggie) which was tooth achingly sweet.

Underneath was the crème, which lacked that punchiness you expect from a mature cheddar like Black Bomber and wasn’t far off the consistency of dairylea. The deep fried leek strips were quite nice, but I found the tomato chutney too acidic (I assume it was intended as such to temper the super sweetness of the caramel, but it was quite astringent rather than pleasingly sour) and I would have preferred the bread to have been at least lightly toasted (looking at the menu description it should have been). Finally the watercress garnish was undressed (a bugbear of mine, as why bother if you aren’t going to dress it).

I presume the idea here was to have a balance of sweet, salt and sour. The sweet element, however, totally dominated and made for an unbalanced dish.

No one who ordered this dish was particularly enamoured with it. A failed experiment I think.

Other starters were much more successful, with the whitebait nicely seasoned and crispy, coming with some good shoestring fries and a decent aïoli.

The chicken liver pâte also went down well with those who ordered it.

It seems that in the case of all of the starters they had run out of plates, with stuff coming on various boards and slates. I like neither, but at least with a bit of slate (once it has finished its roof or floor covering duties) you can put it in the dishwasher.

For my mains, I was again presented with a quandary in terms of what to go for. Initially I was tossing up the merits of the sausage and mash, the pie of the day (love a good pie) and the rather interesting sounding beetroot and goat’s cheese risotto.

I, however, spied on the menu what looked like a bit of a quirk in terms of pricing, in that the “classic Caesar salad” was a whopping £14.95 (way more expensive than anything else bar from the excluded steaks) yet was still part of the fixed price offer.

Again curiosity got the better of me as I wanted to see what could justify a nigh on £15 price tag for a Caesar salad. I love a proper Caesar salad, but I consider it would need to be pretty bloody good to get me to shell out nearly £15 for it if I am honest.

What arrived was OK, but by no stretch a classic Caesar, with a whacking great breast of chicken on it. The chicken was tender and well seasoned and there was certainly plenty of it. What, however, makes for a great Caesar salad is the dressing. Rich with egg yolk and the brininess of anchovies, it should operate to elevate mere salad leaves to something special.

Here there wasn’t enough of it and it was a bit thin and bland. This and the lack of both parmesan and croutons (some of both, but not nearly enough) made it all a bit boring. The chicken totally dominated this dish and that should not be the case in my opinion for a Caesar salad (which should be all about the dressing costing crisp leaves). Bit disappointing even at the “all in” 2 course price, I would have been more aggrieved if I had paid the very optimist £14.95 for it.

If you compared it to the £6.95 chicken Caesar salad at Milk & Sugar, the £14.94 price become pretty unjustified. 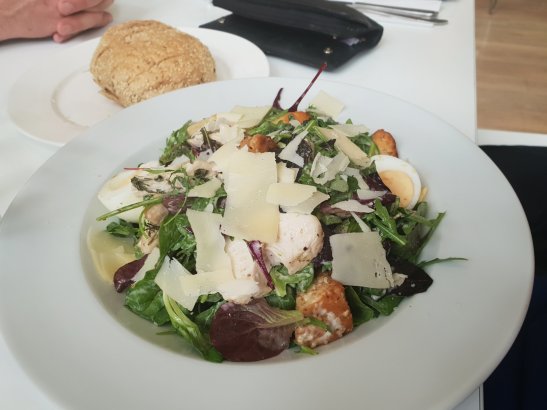 Other mains included a very dull pulled pork item that lacked any real seasoning, let alone spicing from a dry rub or a barbecue sauce. It tasted of very little and most of it was left by the person sitting next to me. This duff pulled pork dish suggested quality control issues in the kitchen as talking to someone else (at the other end of the table) who also ordered it they were more than happy with the flavour.

This left the impression that some of the pulled pork dishes ordered came out of the kitchen without being checked.

The avocado panzanilla was deemed ok, with on the plus side it being a very generous portion. It, however, seemed to be sorely lacking in the crucial bread element (it’s called Panzanella for a reason and it is in the original recipe as a way to use bread that would otherwise go to waste so why be stringy with it) and someone had really gone to town on the red onions (must have been a whole one on there).

The steak ordered was pronounced as nice and cooked to the preference of the diner in question.

Sides were quite good (so I was told – I didn’t order any), with both standard and sweet potato fries being duly crisp on the outside and fluffy in the middle and properly seasoned

Being a working day lunch, the rather fine looking list of whiskys ( 40+) 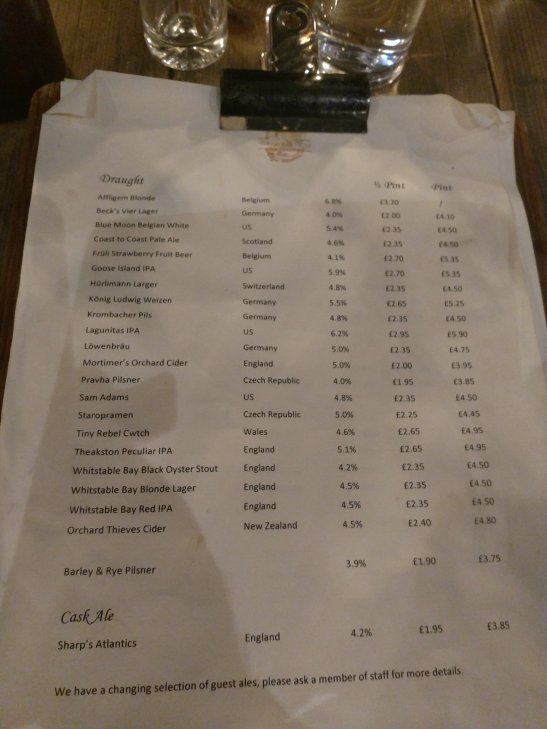 I am not a whisky drinker due to a disastrous first illicit blast as a child through my parent’s drinks cabinet, with a generous tot of whisky being the last one tried before I succumbed to the inevitable (and all the drinks tried made a dramatic reappearance), but Mrs SF is quite partial to a dram. Good selection apparently.

My bag is more wine and the list here is a bit of a mixed bag.

Kudos for having a sherry on the list. Only one mind (nothing wrong with Tio Pepe though) and what is the point of serving it in a 50ml measure.

Finos like Tio Pepe should be treated like any other white wine, with a proper measure not a measly 50 ml. On pricing – a 75 cl bottle of Tio Pepe goes for £7.90 in Costco in Cardiff.

Outside of the sherry, the mark ups are more reasonable. For instance Macques de Caceres retails at around the £9 mark and is £24 on wine on the list. By UK standard that is a not an unreasonable mark up (the Spanish would lynch you if you tried to charge that sort of price).

Soft drinks do not feature on the list and we had to ask what they had and have it verbally recited back to us which was a little tiresome in terms of having it recited at the top, middle and bottom of the table.

I find people tend to default to coke/pepsi if soft drinks are not listed (so place is not doing itself any favours in terms of upselling), but I bucked the trend and went for a Victorian Lemonade from Fentimans. No idea of cost (another issue in terms of not have soft drinks on the drinks list) as I lucky wasn’t footing the bill (firm treat).

Not sure what to make of Barley & Rye. I had heard good reports, but I was a bit disappointed. Some stuff just didn’t work conceptually (the black bomber crème brûlée), whereas others were poorly executed (the pulled pork). Some dishes were nice (the chicken liver pâte, the whitebait and the steak), but all in all it was a bit hit and miss.

Out of Cardiff’s fixed price lunch offering this place may be one of the cheapest, but I think I prefer to spend a bit more on the likes of Asador 44 and the Classroom.

Would I go back? As it is the wrong side of town for my work, I doubt I would be up for the hike across town again of a lunch time. There seem to me to be much better options nearer to my office.

Perhaps dinner is a step up from the lunch time offering?