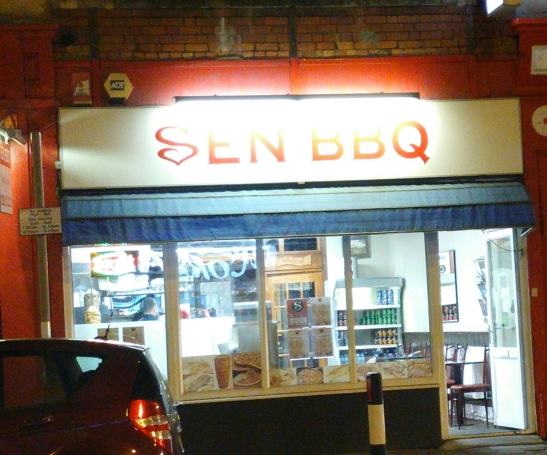 The kebab and, in particular, the doner is a much maligned beast. People, quite rightly in some cases, view the rotating elephant’s foot with suspicion. “What meat does it really contain?” and “how long has it been rotating?” are legitimate concerns. Most have full provenance, but I have had more dubious tasting kebabs (particularly in my youth after a few too many drinks) than I care to remember.

A proper Turkish kebab is, however, an entirely different (easily identifiable) animal from the very late night kebab shop/van of my youth. Quality meat, expertly grilled, is the order of the day in a proper kebab place. Any rotating kebabs in these places comprise of constantly basted layers of lamb or chicken rather than meat of anonymous origin.

Such a place, according to reports I had heard, is Sen BBQ in Canton. This place has the added wonderful benefit of a no corkage policy. Always a bonus for me, being able to bring my own wine at no extra charge.

When you step inside this place is looks like your common or garden takeaway kebab shop (albeit a very superior one), but behind a door leading off the cooking and takeaway counter area is a back room where you can eat in (take out is available out front and very nice it looks too).

The decor in here is a curious mix that may well have found favour with the late, great, Hilda Ogden (Gawd best her –  RIP Jean Alexander). 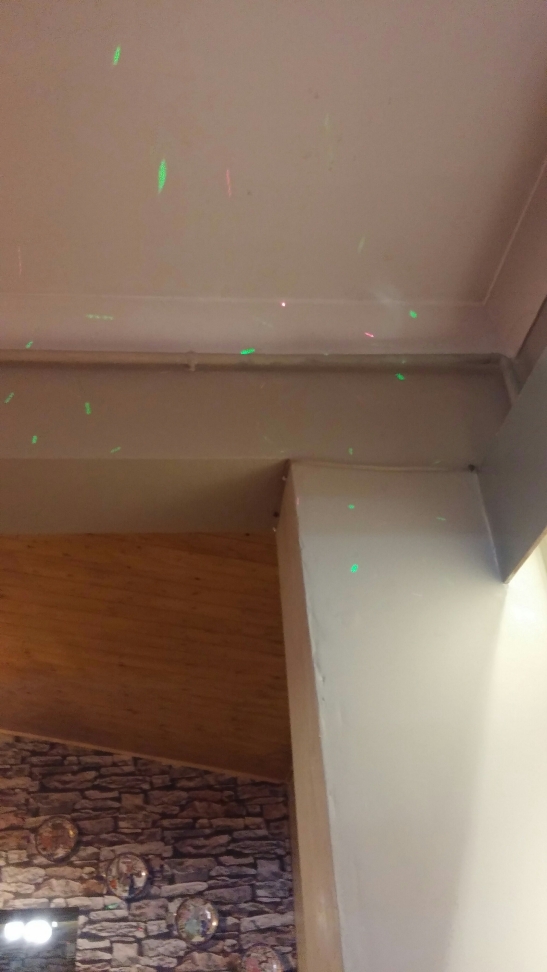 You even get a light show on the walls as you eat (“very classy, Stanley” is what I suspect Hilda would have said of this).

Not really my cup of tea if am honest decor wise, but personally I don’t really care what a place looks like that I eat in as long as the food is good (and the quid pro quo is places I eat out in generally don’t seem to mind what I look like – which is never a pretty sight).

The menu is classic Turkish, with hot and cold mezze style starters and kebabs of all varieties for the mains, plus other grilled meats, pides (Turkey’s take on a pizza) and a couple of seafood options.

Mrs.SJ and I  started off with a really good and generous portion of hummus (£3.50). This stuff can be bland, but Sen BBQ’s version was the real deal, with bags of flavour and a lovely garlic hit to it.

Very moreish, scrape the plate clean stuff, and fab with the lovely basket of bread it came with.

We also ordered some sucuk (Turkish sausage £4.00), nicely flavoured meaty slices of fine textured sausage (bit like a spicy frankfurter) sitting on a nice portion of cooked peppers, onions and mushrooms and laced with a vampire proofing level of  garlic, as well as bit of lettuce.

For mains, we decided to go all in and ordered the BBQ mix grill  (£23). This platter of plenty represents a bit (a big bit) of pretty much all of the grilled meats on offer at Sen BBQ.

A spatchcocked quail, chicken and lamb shawarma/doner, shish kebabs (lamb and chicken), adana/kofte kebabs, lamb breast, lamb chop (singular, which cause a slight bone of contention between Mrs. SF and I) and chicken wings

All nicely favoured with spice and a lick of smoke on top. Pretty much all good, with the stars of the show being the lamb and chicken shish kebabs and the adana/kofte. Beautiful tender, well seasoned and bang on the money flavour wise.

The only slight bum note, meat wise, was the lamb breast – whilst good on the flavour front it was a tad on the tough side. Also as alluded to above there being only one lamb chop caused a slight rift between Mrs. SF and I. I assumed there would be two so greedily scoffed the first one I came across. Alas there was but one of them so Mrs. SF missed out. In my usual subtle way I assured her it was very nice. Didn’t help that, have to say!

This mega medley of meat sat on a serious amount to buttery, fluffy rice and was laced with grilled red peppers. Another basket of bread, as well as a decent, well dressed, salad (be warned there were a couple of incendiarily hot pickled chillies hiding amongst the onions, cucumbers, red cabbage and tomatoes).

All in all a lovely meal and super value.

We admitted the inevitably defeat, with some rice and 3 chicken wings left. A sterling effort I thought, which required a walk (waddle) home to burn off a tiny quantity of the calories we had consumed and to assuage our guilt at being such piggies. Doggies bags are available if need be (we saw many take advantage).

On the drinks front, whilst they have a booze licence, on chatting with the chef/owner he said the clientele is 50:50 in terms of not wanting/wanting booze. On this basis they decided to go down the BYO route and (joy of joys) to charge no corkage fee.

This makes the place even better value.

I adopted a “when in Rome” approach and pulled a bottle of Turkish wine I had lurking in the wine room – ideal I thought for just such an occasion.

Bought from good old M&S (who have a lovely selection of wines from off the beaten track) a while back for £7.50 (has subsequently gone up to £8.50 since I bought it), this was a rather nice drop that worked very well with the food (even the tricky to match garlic laden hummus) and, in particular, the lamb elements

Made from a blend of international (shiraz and cabernet sauvignon) and indigenous Turkish (kalecik karsai) grapes, this had nice red fruit flavours and a touch of smokiness.

Nice on its own, it really seemed to come alive with the food. Would definitely recommend a bottle of this stuff as a BYO if you come to Sen BBQ.

Various hot and cold drinks are also available. We saw many a Turkish tea being consumed on our visit.

Whilst the surroundings may not be palatial, who cares when the food in good, plentiful and cheap! The deal is very much sealed in my eyes by the no corkage fee BYO policy.

We paid (sans a well deserved tip) £29. Add to that the price of the wine and you have a Turkish feast (including booze) for well under £20 a head. In reality, you can eat very well here for under a tenner. Can’t fault that can you!

Would I go back? Oh yes, for both eat in and takeaway. Top place, offering great value.  The City Road establishments may be “kebabing” the plaudits in Cardiff, but with this place Cowbridge Road East is well worth a trip for your kebab fix.