Not many people like their jobs enough to actively look forward to a Monday.

I personally experience times where I really enjoy my job and times when I loath it with a passion, but on the whole I am fairly ambivalent about it (it is hard work with long hours, but usually interesting and above all it pays the bills). I certain don’t wish my weekend down time away and view with extreme suspicion those that do (or profess to).

I suspect most people are like me and are a little saddened by the weekend ending and a wee bit depressed on Monday morning – Blue Monday is a semi recognised term after all (although it being an actual calendar day based on an equation seems to be mainly based on marketing guff ). Anything that cheers up a forlorn Monday morning has, however, to be viewed as only a good thing.

This brings me to Base + Barley (referring to – as per their website blurb – base as in their sourdough based pizzas and to barley as in their craft beers),

whose offer of 50% off their standard main course food menu prices on Mondays is billed as a blues busting deal.

On this basis, one of the usual chaps from work and I made the extra effort to get across town to check (it is not that conveniently located for my office) to see if our collective melancholy Monday mood could be lifted by stuffing our faces with cheap food.

I would say that said cheap food has to be good to have the required effect. Cheap rubbish is, after all, still rubbish. 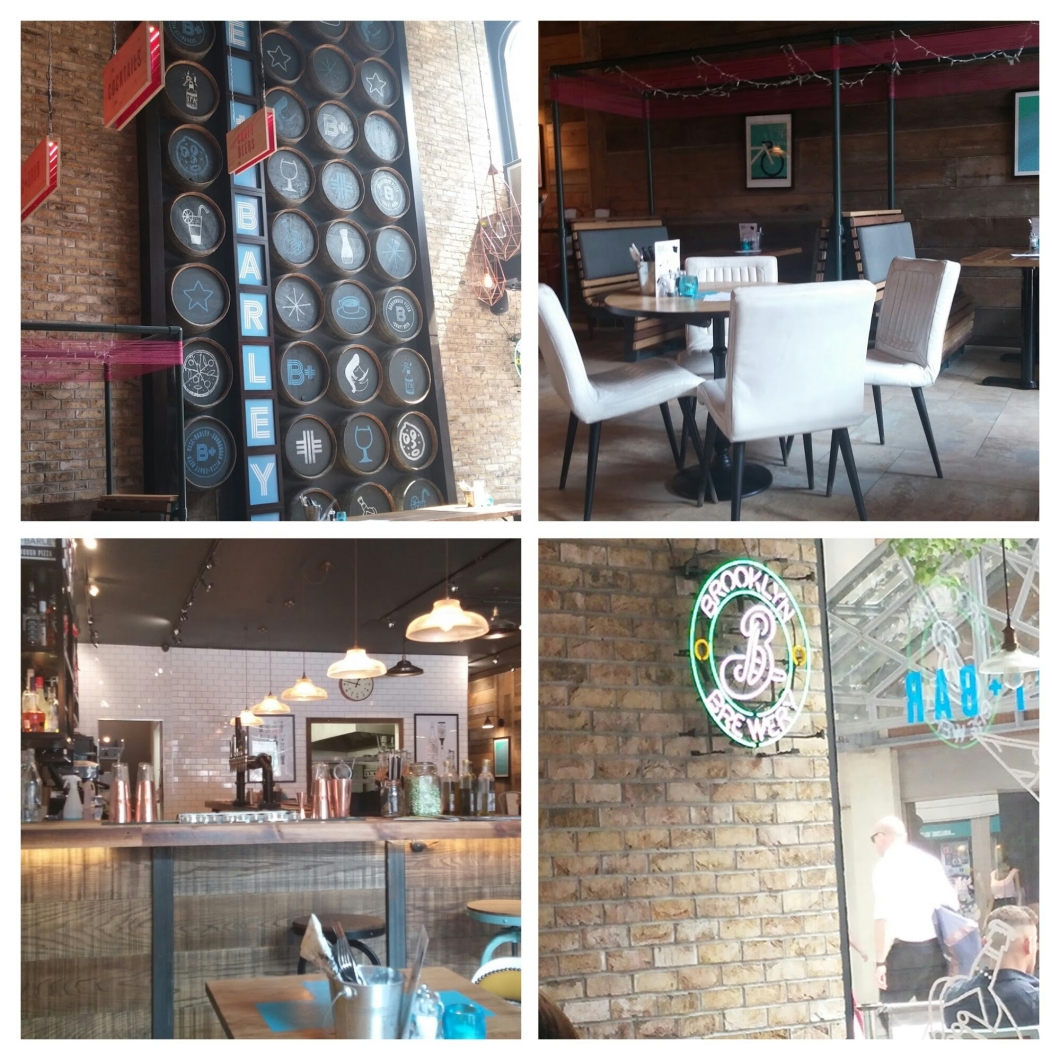 Inside it is all stripped wood and exposed brick work. It could have been cold, but they have put in some cosy booths and elsewhere there is an eclectic mix of furnishing and seating. I though it a nice spot for food or a drink at any time of the day.

The food on offer of a Monday (commendably including Bank Holidays) consists of their main course offerings of sourdough pizzas, stonebaked dishes

“homemade gourmet” (their words not mine – see later) burgers, 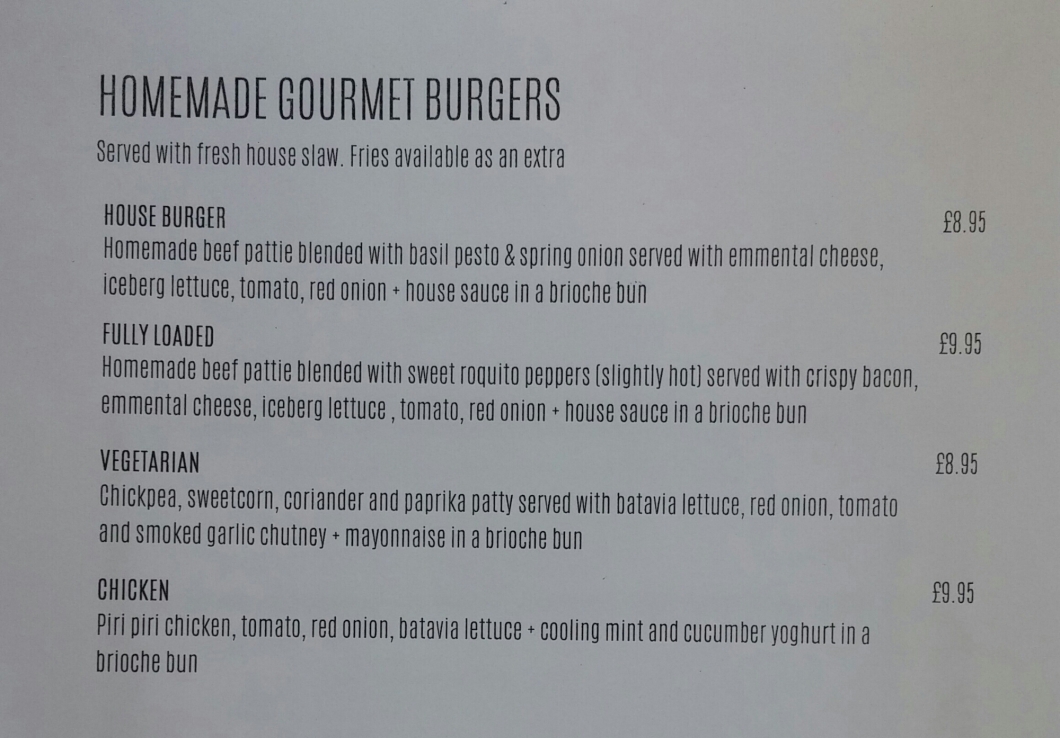 On the basis that the place is “all about the base”, I decided that a pizza was in order. I noted in the “on table” and website blurb that they make (what is to me) the very bold claim that:

“Our pizzas could hold their own in the backyards of Napoli”

Fighting talk which, could as Napoli is the spiritual home of pizza, get them lynched by the Associazone Verace Pizza Napoletana.

You can build you own pizza (£6.95 + 75p per topping at normal prices) or go for one of their numbered pizzas (all £7.95 bar from the basic margherita which is £6.95). I like the simplicity of this and it avoids mangling the Italian language when ordering. Pricing wise building you own seems a much more expensive option than the in-house numbered ones.

I went for the No.6 which added njuda sausage paste, salami and hot roquito peppers (in addition to tomato sauce and mozzarella) to a sourdough base. This is a bit more fussy than my usual pizza choice, but I am a sucker for both njuda and roquito peppers

This has a good flavour to it with some heat from the njuda and roquito pepper (enough to have me reaching for the bottle of water brought to the table – I am a bit of chilli wuzz). There was also not too much tomato sauce (good flavour to it as well) and a decent amount of stringy mozzarella.

The pizzas at Base + Barley are (according to the marketing blurb) cooked in 90 seconds in a 485°c wood oven and mine had a decent chew to it and was nice and light. I was, however, expecting a bit more of a charred flavour from the base due to the wood oven. The base was also a bit soggy in the middle. This was due at least in part I suspect to the oil from the njuda, but also I think a tad too little oven time. Perhaps mine was taken out of the pizza oven at 85 seconds.

Perhaps not quite up to their boast of their pizzas holding their own against those from the back yards/streets of Napoli (as I said that was a pretty bold claim), but having said that it was a pretty good pizza for the normal £7.95 price tag and a veritable bargain for the less than £4 I paid for it. Decent size to it as well.

My friend somewhat unwisely (in my view) ordered a burger. I thought this unwise as the marketing blurb makes no mention of burgers whilst going on about the pizza base and the beers. This suggested to me something that was a menu afterthought (a “well we better do a few burgers as everyone else is”). He is a litigator and they never think logically (will constantly argue black is white) and thus ignored the warning signs and went for the house burger, which had (somewhat unconventionally) pesto (basil I assume) mixed into the beef patty. No question was asked as to how he would like it cooked (so no chance of getting it to my preferred medium rare)

Sadly my fears regarding the burger came to fruition. Whilst a large burger and thus ostensibly good value, the bioche bun was quite dry (only recognisable as such due to colour and it saying it was so on the menu) and the burger was quite dense and also a little on the dry side (cooked to a resolutely medium to medium/well). If it was homemade (they say it is so can only assume that was the case), the patty must have been somewhat overworked to get to the density of texture achieved here. 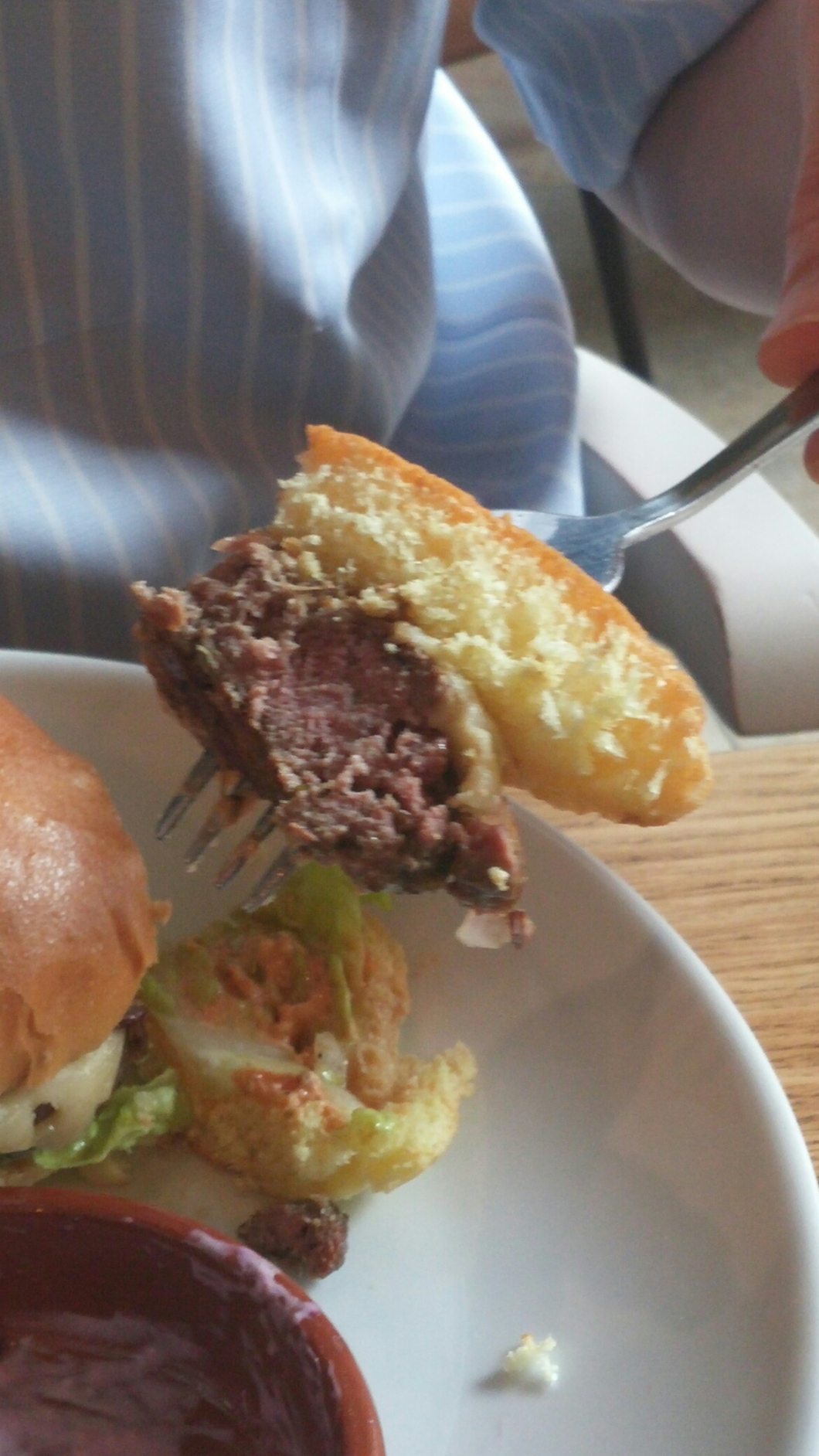 My friend said there was not much flavour to it, with no discernible taste of the alluded to pesto (probably not a bad thing – why add something that masks the flavour of beef – if it is good beef there are not many better tastes), and that it was too dense and somewhat underseasoned.

Fries arrives with the burger (not ordered or charged – so not sure why, as the menu makes it clear fries are extra) and these were OK if again a little dry and underseasoned. The red cabbage coleslaw was pronounced as quite nice (personally I prefer a more vinegary rather than creamy coleslaw as was the case here but my friends was happy enough with it).

The base price of the house burger ordered on the menu is £8.95 (oddly despite fries being extra these came with it and the price on the bill was £7.95 all in). Not a great burger at the full price and my friend’s somewhat damning view was he wouldn’t order it again even at the discounted price.

On the booze front, they pride themselves on their beers and the list looks pretty good even to a beer ignoramus like me.

A pale ale like the Cooper’s or Flying Dog on the list (or even the Brewdogs Punk IPA) would have gone quite well I think with my quite fiery pizza.

Bearing in mind the blurb refers to their beers being from “local yeast gods” it is a little disappointing to see no Welsh brewers featuring on the list. Beers from Australia, US, England and even Iceland feature, but there is seemingly no room for anything from Wales on the list. Shame that as there are some great Welsh brewers around.

On the wine front they have an interesting, predominately Italian, list for both the whites

It is nice to see most wines by the glass but (as I have said before on the blog) I find it perplexing that (in this day and age of wine preservation devices) not all are offered by the glass. If you are able to sell some by the glass I don’t get why you can’t sell them all by the glass.

For cocktail fans there is a short list with the usual suspects on it.

Alas it was a no booze work day lunch and so it was soft drinks for us. The selection is short but not too staid for non booze drinkers. We both went for San Pellegrino, which was a not too badly priced at £1.50. Perversely coke/diet coke seemed very pricey at £2.45.

In summary, most bases are covered if you fancy a drink at Base + Barley.

We paid in total (less tip) £11.84 for a large tasty pizza, a large (but not great) burger and fries (although in hindsight I think they may have under changed us for the latter) and 2 soft drinks. 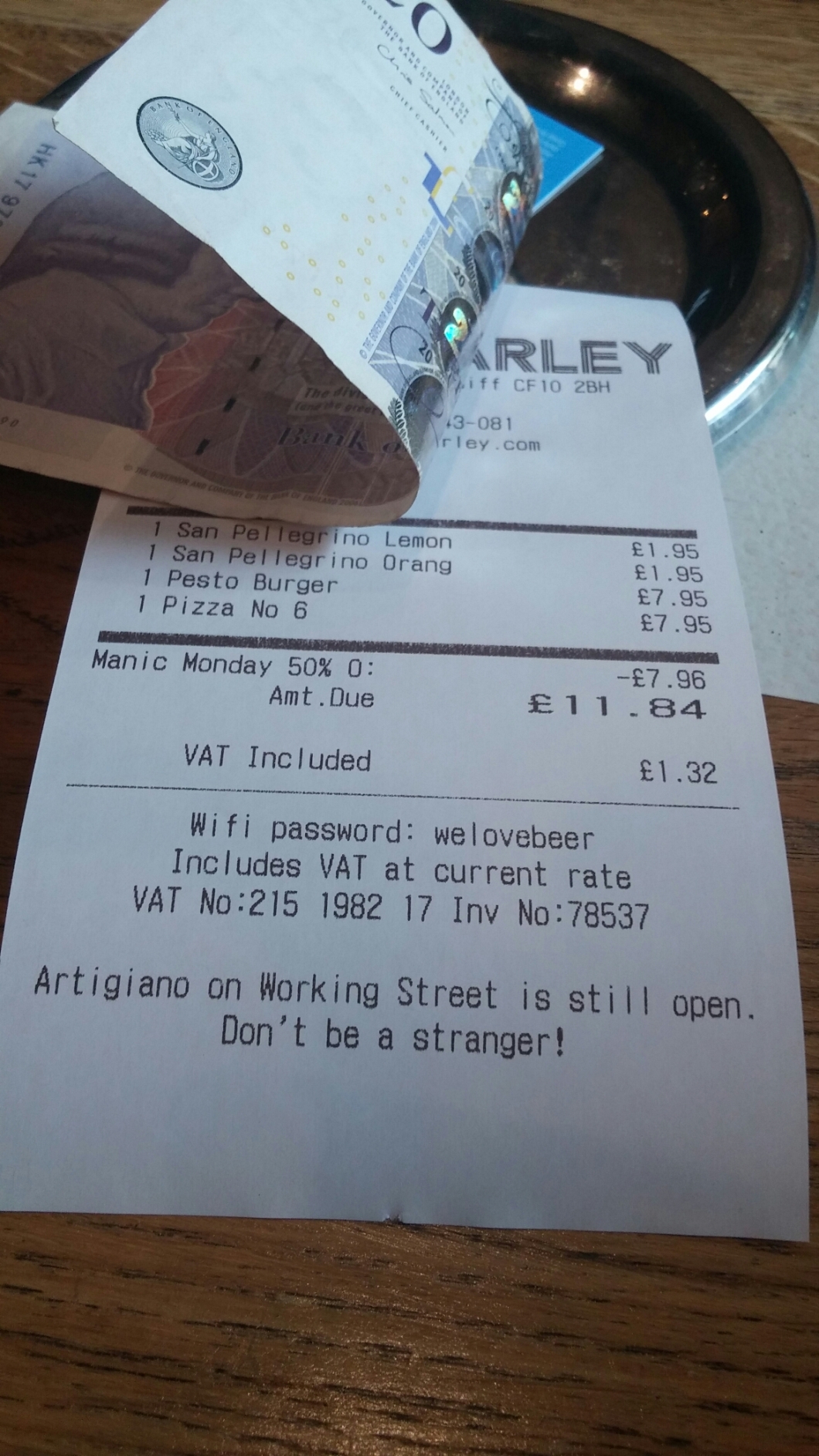 I was very happy with my pizza and would have been so at the full price of £7.95. l thought it great value at the 50% off price I paid. The burger was less successful and my friend was ultimately disappointed with what he got even at the discounted price.

Would I go back? For the pizza and the booze yes, but not the burger. So in summary, a case of pizza – woohoo, but burger – boohoo.