As a resident of Llandaff, I was more than a bit pleased when the highly rated Pickled Radish decided to spread its wings (from its very successful Laleston base in the Vale of Glamorgan) and set up shop on the High Street in Llandaff.

Alongside the already established Porro, the breakfast, lunch and diner offering from the Pickled Radish promises something interesting as a dining option in the village come city (for non Cardiffians it has a Cathedral so is classed as a separate city) that is Llandaff.

Situated on the High Street, it is located in what used to be Mulberry Street (a hit and miss small plates place – whose demise was no great surprise other than that it lasted as long as it did).

On the outside it is quite understated, which I like.

Inside it is what Mrs. SF described as shabby chic. I thought it quite New England, with stripped wood everywhere.

It was buzzing on our visit, by the time we got our mains, with pretty much a full house. Llandaff certainly seems to have already warmed to the place, but a heater pumping out hot air make it perhaps a tad to warm for me and Mrs. SF.

The “season driven” al a carte menu contains some intriguing items (tomato and marmite soup, as the dish’s “Love it or hate it” monacker suggests, is going to divide people) and some more conventional ones. All look good, although I suspect some of the pricing (£11 for a scallop starter) may be regarded as a touch on the high side by the denizens of Llandaff (portion sizes are generous though). 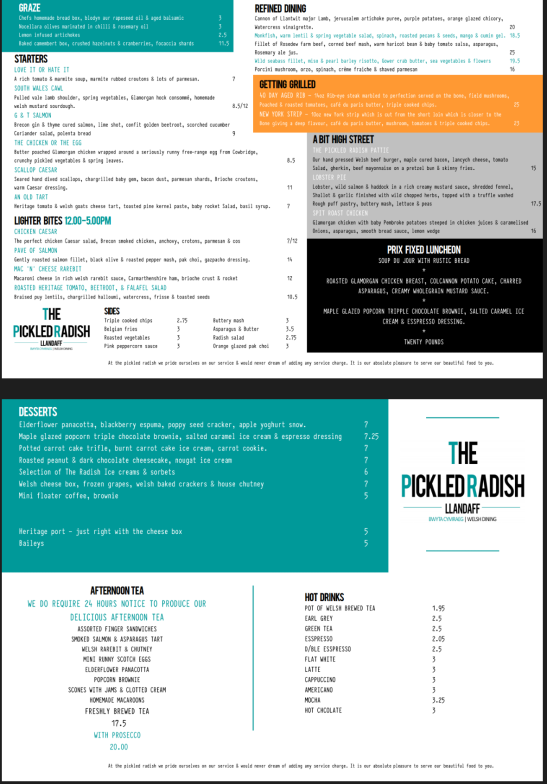 There is also a “chefs’ table” menu (priced at £60 per head), which looks very interesting indeed (in a good way). Odd (as taken from website) that it is stated to be January’s mind. 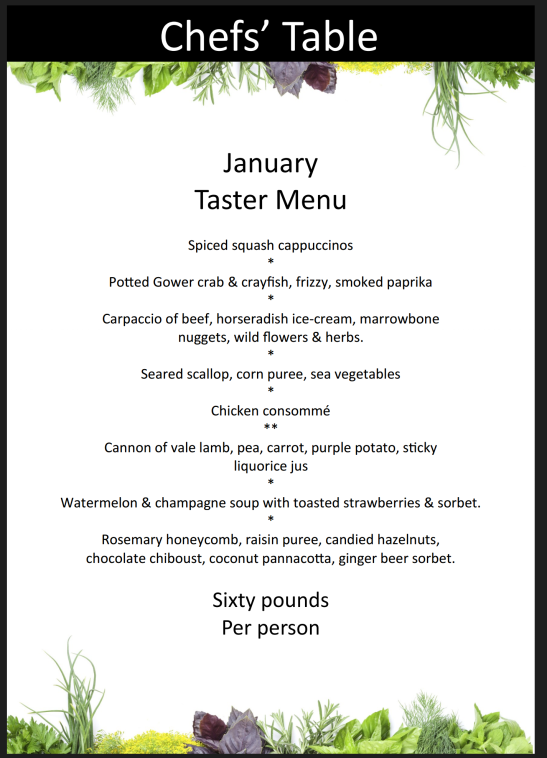 I was, however, there to sample one of their mid-week offers (steak on Wednesday and fish on Thursday) which gives you a main, with a choice of 2 sides, a sauce and a large glass of wine for £20 (very appealing to the miser in me).

Out of the two, we (Mrs. SF and I) plumped for the “Fisherman’s Thursday”, with a choice of sea bass, lemon sole and wild salmon.

It was nice to see the use of wild rather than farmed salmon, as I find farmed to be flabby and lacking in flavour. I also find it off-putting that farmed salmon’s natural colour is grey not salmon pink (they have to add artificial colourants to pellet feed given to the fish to get it pink).

I would like to see perhaps a bit more adventure on the fish options front and for it to change to reflect what is in season (April is good for lemon sole, hake, gurnard and red mullet and OK for seabass but not it would seem wild salmon). It is early days (them having only opened in March), but I do hope they mix up the fish on offer so as to reflect what is in season.

In terms of seasonality, the lemon sole looked to be the best option (and I love sole) so it was the obviously choice for me. 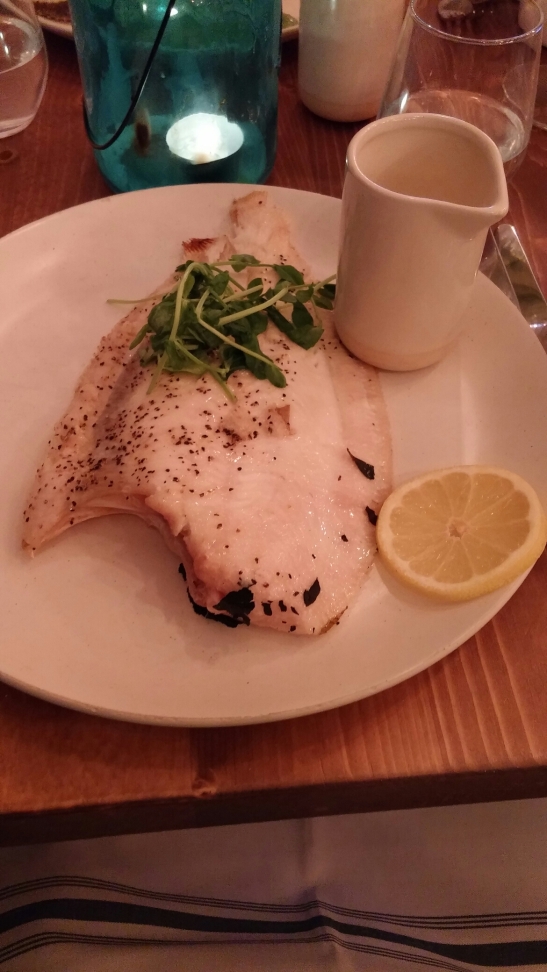 This was on the bone. Whilst I like this, I know plenty of people who would baulk at the self filleting exercise required. Even though I have no qualms about filleting a fish, the lack of a plate to put the bones on was a pain as the bony discards filled up the plate. We had to ask for one in the end, but really this should have been provided without having to ask.

The fish itself was nicely cooked and properly seasoned. It had a good flavour to it and all in all was a well cooked, tasty piece of fish.

With my sole, I choose a classic beurre blanc sauce, which has a nice mix of rich butteriness and acidity.

For sides, I went for triple cooked chips and cabbage, leeks and peas. These came in pots (looking at other dishes coming out of the kitchen they seem to eschew proper plates, which is a shame – thankfully my sole was on a plate) and were both very nice, although the chips were lacking that super crunch on the outside you associate with the triple cook process.

Mrs. SF choose the same as me, bar from her sauce being a pea and watercress vinigrette. This was nice with a great blend of sweet pea and sharp vinigrette, but it overpowered the delicate flavour of the lemon sole somewhat (not their fault) and I think it would have been better suited to a more robust fish, flavour wise, than the lemon sole (i.e. the salmon).

Both Mrs. SF and I had clean plates having enjoyed our fish supper very much.

Whilst the fish and sides was more than enough to fill us both up, we decided on a dessert each from the very tempting list.

I went for the Welsh cheese box (£7), which was a big old portion,

with 4 good welsh cheeses (a blue, a brie style one, a smoked one and a hard one). It came with plentiful quality Cradoc crackers and it is always nice to see a place not skimping on the crackers especially when of Cradoc quality. The cheese was accompanied by a very good onion chutney, celery and frozen grapes. More than enough for two, this was an excellent cheese offering. My only quibbles were the frozen grapes (not sure of the point of these over unfrozen ones – smacked a bit of style over substance to me) and the odd fruit and veg. crate it came in (I really prefer my food on a plate rather than in a crate).

The offer on the menu of a glass of port with my cheese (£5) was tempting, but they had somewhat oddly run out (which was a shame).

Mrs. SF had the roasted peanut and chocolate cheesecake with nougat ice cream (£7).

This was a crackerjack of a dessert, with the crunchy caramel coated peanuts working really well with the rich chocolate cheesecake mix. The nougat ice cream was packed with chunks of the stuff and sat atop an intense chocolate crumb. This place really knows how to do desserts (don’t skip these when you visit).

On the booze front, the £20 offer includes a large (and they don’t skimp here) glass of wine (New Zealand Sauvignon Blanc or South African Chenin Blanc with the fish and Shiraz or Merlot with the steak).

The menu referred to the wine being Chardonnay or Pinot Grigio, but we were advised this had changed to Sauvignon Blanc or Chenin Blanc. Can’t say I was too distressed about this as not a fan of most Pinot Grigios. There is good stuff out there, but generally at a price. I find the cheaper offerings to taste of very little. I love good Chardonnay, but the cheap stuff can be vile, over oaked, rubbish.

We both went for the Chenin Blanc, which was perfectly pleasant with baked apple on the nose and palate, but with a nice amount of acidity. It went surprisingly well with the fish and bearing in mind it was part of a set price offering was good quality and value for money.

Looking at the wider list, whilst it is nice to see a Welsh red (Pinot Noir) from Ancre Hill (perhaps a bit ambitiously priced at £60 ), it is a little limited in scope and ambition in the context of their Welsh fine dining tagline (why is there no Welsh fizz, which is of increasingly good quality, on the list for instance).

Bearing in mind they have a tasting menu (these are notoriously tricky to pair wine wise and the diversity of flavours on this one makes it no exception), the list would benefit from the inclusion of that food wine par excellence, a Grüner Veltliner. Adding a Riesling (any list benefits from having a decent Riesling on it) and a Welsh fizz to the list would also be nice from my perspective.

I thought the £20 price for a very good-sized, well cooked, fish dish and large glass of decent wine represented really good value for money. The quality and quantity of both and food and wine on offer was excellent.

The desserts were really very good and based on these and sneaky peeks (Mrs. SF told me off for being nosey as I craned around as dishes passed us on route to other tables) at the al a carte offerings being delivered to other tables, I am keen to try stuff off their other menus (as well as the Wednesday steak night).

Price wise we paid £57 (ex tip) for two courses, plus a large glass of wine each and one large cappuccino.

Good value, in my opinion, bearing in mind quality and quantity of what we got.

Service was good on the whole (we were perhaps asked a little too often how our meal was) and deserving of a decent tip.

Would I go back? Yes, planning to do so for breakfast, lunch and dinner. The Pickled Radish is, in my opinion, a really good addition to both the Llandaff and wider Cardiff dining scene. Ideally I would like to see a more ambitious wine list to match the quality of the food on offer, but that really is nit picking.