A tale of two takeaways – lockdown living delivered by Keralan Karavan and Salkara.

As I mentioned a few weeks ago, I am not a big takeaway eater. All to often something seems to get lost in the process and I have tended to be just a tad disappointed with the infrequent takeaways I have had. Also if I want to eat something cooked by someone else I tend to go out to do so.

Needs, however, must and it is nice during lockdown to take a break from cooking (for Mrs. SF mainly as she generally takes on the weekday cooking duties, with me doing the weekends – so of course I try to angle it so we get the takeaway at the weekend).

With eating out a non starter we have tried (with great success) various options from cook boxes (see post on Cook with Leyli Joon & Co) to oven ready meals (week before that with Mr. Croquewich Bistrot Home Delivery) and now it is the turn of the traditional takeaway.

In terms of this  latter option, we went from famine to feast – with two takeways within the space of 4 days (hence the tale of two takeaway)

First up on a Saturday night was one of my favs from the city centre in the form of Keralan Karavan (who before Covid 19 struck were in residence at Kongs producing lovely pan Asian
Food in collaboration with the Monday Club in the guise of Nomad Kitchen, as well as a rather fine Indian riff on a roast dinner).

When I notice on twitter Keralan Kitchen were doing takeaways on Ubereats (something I have very recently signed up with) I thought I am having some of that.

My plans were dashed, however – at least initially, by Llandaff oddly being ouside of the Ubereats range

Not to be dissuaded, it transpired from a twitter exchange with the Keralan Karavan people that (outside of Ubereats) they could arrange delivery to Llandaff.

An order was put in via a link they emailed to me, with details of address, contact details, the order and deliver time to be added.

It was there first weekend of delivering direct and via Ubereats.

First up were some rather fine
rainbow poppadum (£1.50), a playful twist on your traditional poppadom, with a nice coating of rather zingy vinegar powder.

These had survived the delivery process without losing any of their crispness.

Included in the poppadum price were pots (quite dinky) of mango and coriander chutney, which provided a nice sweet adjunct to the sourness of the vinegar dust on the poppadums

We also added to our order a couple of pots of their pink raita. Wasn’t really sure what to expect of the raitha (50p a pot),which consisting of  beetroot, yoghurt and chat masala. It was very nice, but there wasn’t enough of it (we bought 2) for our intended use as a dip for the starters we ordered. Personally I would have preferred the option to pay more for a bigger pot. 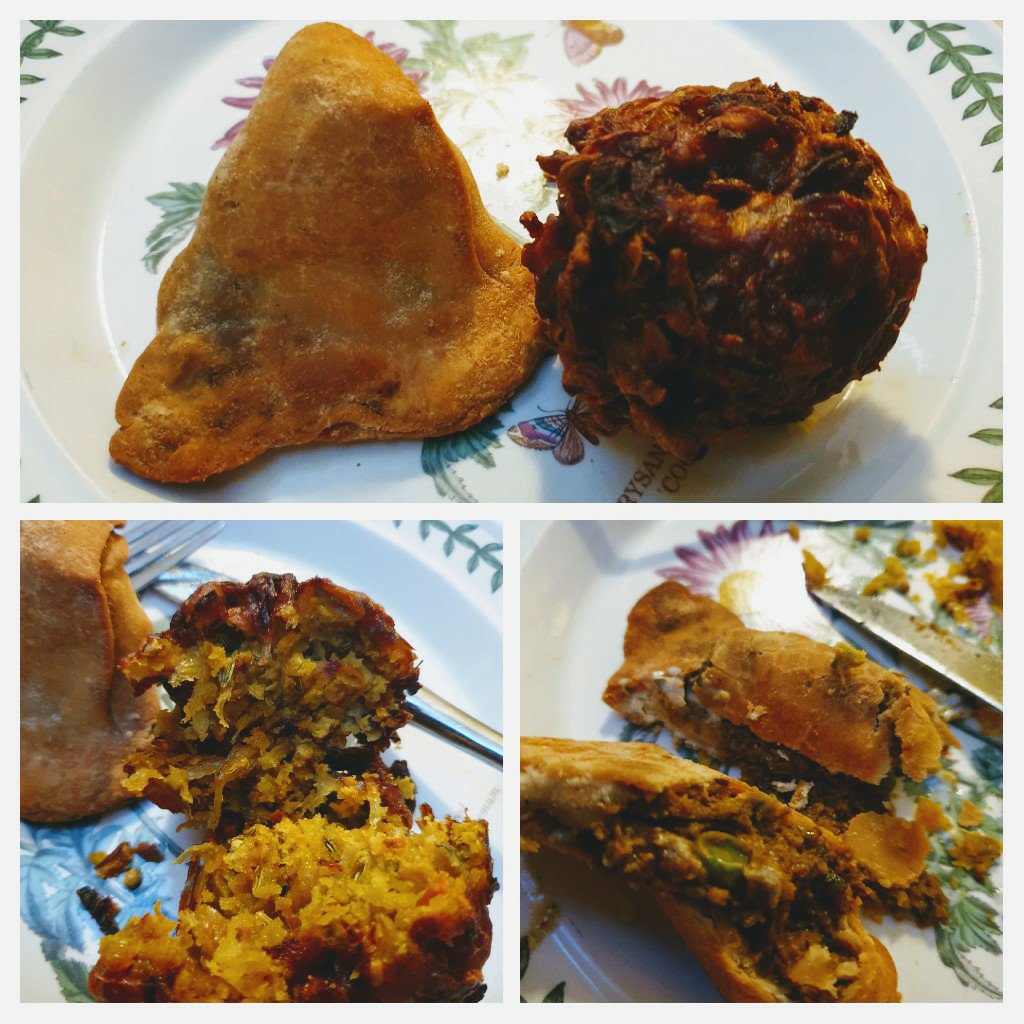 Like the poppadoms these survived the delivery process (somewhat elongated and – as a result – the need to be re heated), with the requisite crispness to both the pastry on the samosa and the exterior of the bhajee.

The pick of the two (both were good) was the samosa, which eschewed the usual wafer thin (filo type) pastry for a more shortcrust style number and included a rather noval filling of lamb haggis mince (I assumed it would be offal, but actually it was quite nice😁).

I did rather wish I had more of the pink raitha to dip these starters in – we improvised and made up a mint and yoghurt number from stuff we had in the fridge.

On to the mains, we both went for the Keralan nadan chicken curry

Nice ratio of meat (dark meat from the leg and thigh meat I think – much more flavour than breast meat) to sauce, with a good hit of heat (well to a chilli wuss like me).

Lighter on coconut and heavier on curry leaves and chilli  (at least to my jaded palate) than some other Keralan curries I have had, I really enjoyed the spicing on this dish (and the generous amount of chicken).

We had a load of rice in the house so used that rather than adding it to our order, but in hindsight I wish we had ordered the paratha bread (2 pieces for £2.50). Next time will make sure to add that to the order.

Due to a mix up re delivery our meal (we are not the easiest to find, as sat. nav.  can take you the wrong way) was a little late. First night and things go wrong so no biggie. The important thing was they communicated re reasons – rang me to explain why it was a bit late and to check we had got it.

It is accepted that things can go wrong, especially on a first night, but it is the way problems are dealt with that really matters  Here they communicated, which is key.

The lateness of delivery, however, allowed me to test how well the stuff reheated and I can say the result was very well.

One word of caution – transfer the curry into an oven proof dish (one ours came in wasn’t) or microwave it (my preference is always the former) if you have need to reheat.  Hopefully not needed, as think (judging by twitter that night and on subsequent nights) I just got unlucky (story of my life I fear). I have noted they are now delivering to Newport and these are delivered cold to always be reheated – good option that.

They have since my delivery expanded the menu to include a rather nice sounding beef curry.

In terms of wine pairing, the below rather fine Cornish rosé from Polgoon (they do mail order) worked very well.

Nice crisp red fruit, good acidity and a smidgen of sweetness was a good foil for the curry. Rosé wines tend to work well with spicy food and this was no exception.

Total price was £28 (sans the wine), which was good value for the quality and quantity of what we got.

Delivery are Thursday to Saturday only.

Suggest you get in early as they tend to sell out quick, especially the direct delivery option.

The second takeaway was from   another old favourite, Salkara in Llandaf North.

I ordered via the Ubereats app on my phone and I did find it a little frustrating. I tried to order several times for various dates and times with the order seeming fine until I went to pay when it said that in the interim (literally 10 seconds) the items on the order had sold out.

Eventually I manage to get a slot on a Tuesday (I ordered on a Friday), but oddly the order form said rice had sold out (thought that was very odd –  a curry yes, but rice really?!). Lucky we had a large store of rice in the pantry.

Anyhow, sans rice, I got my order in and as it was my first ever Ubereats order I got £10 off – which was nice.
It arrived very promptly, with good communication (notified when it had left the restaurant, delivery person is outside etc.) and was all piping hot.

On the starters, the chicken tikka consisted of good size chunks of tender chicken. Nice spicing to these.

The lamb tikka was even better and I really enjoyed the spicing, with seemingly a tad more chilli heat. Really good flavour to these and nicely tender.

One things I missed, though, with both starters was a bit of greenery.

I usually bemoan (unnecessary) garnishes, but here a bit of shredded lettuce and lemon and a mint dressing would have been a welcome addition.

On to the mains, I ordered the Syrian beef curry and Mrs. SF had the nadan chicken curry. Both arrived nicely hot.

The Syrian beef curry,  with beef quite an unusual meat to have on a Indian menu due to Hinduism revering the cow, was chocka full of tender beef and gave off a heady aroma.

This dish apparently comes from the Christian community in Kerala and was loaded with spice (curry leaf, coriander and ginger in particular) and a nice hit of chilli heat.

I thought it had a very good ratio of meat to sauce. Really enjoyed this.

Mrs. SF’s nadan chicken curry was much more coconutty and with less chilli heat than the Keralan Karavan one.
I preferred the spicing and use of dark meat in the KK chicken curry, whereas Mrs. SF preferred the Salkara one with chicken breast. She did think it was a touch shy on the amount of chicken, particularly when compared to my beef curry (odd that they were more profligate with the seemingly more expensive beef).

The naan we ordered had that slightly crisp exterior and then chewy interior I like and survived the journey pretty well. 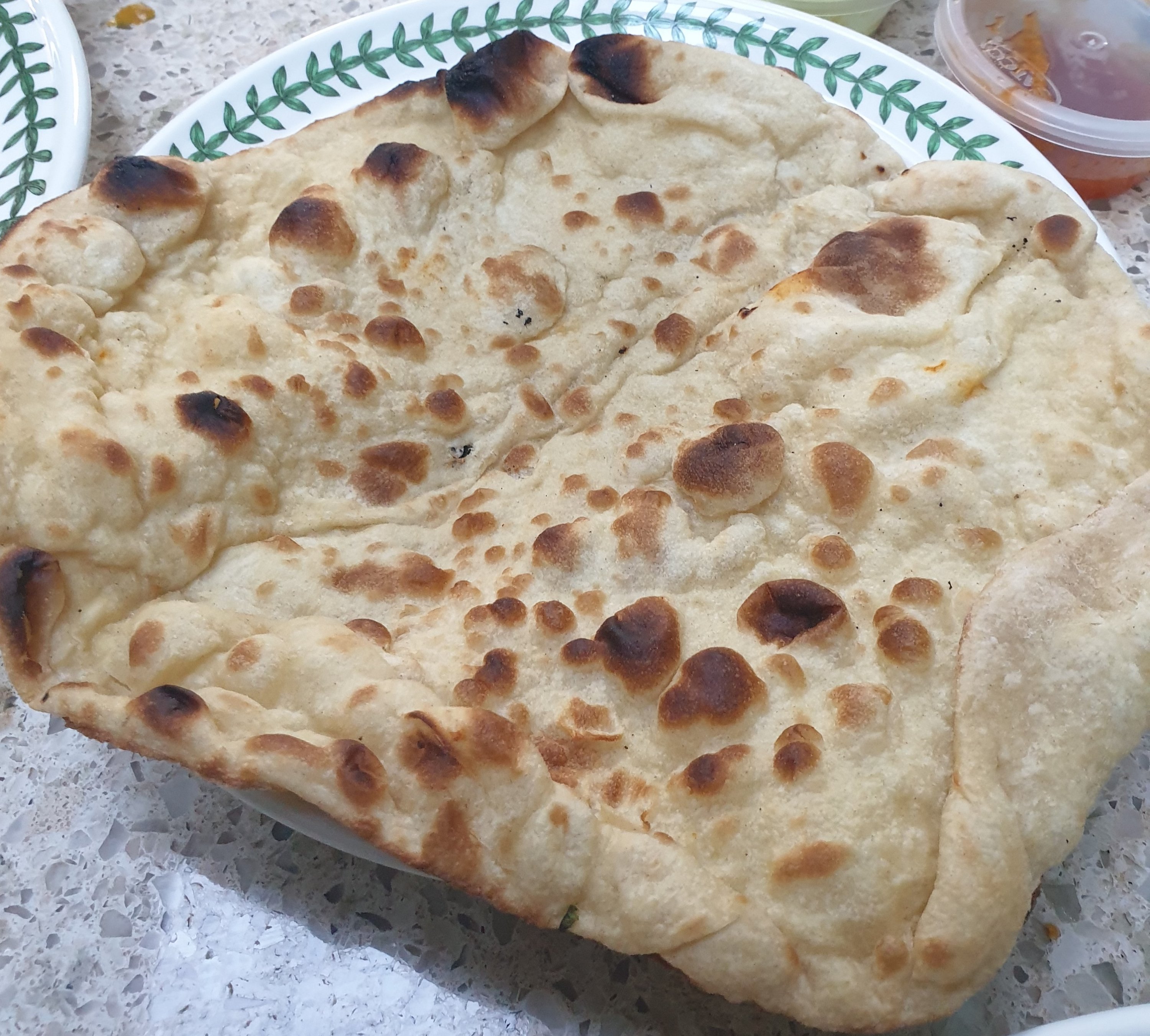 I fancied a beer on the night we had the Salkara curry and this crisp Czech  number worked pretty well as against the heat and spice of these curries.

If I was shifting it up a gear, I reckon a palo cortado

would have worked a treat with these curries.

With the beef curry I could see the below beauty (which can be got from Producto de Marco here in Cardiff – who deliver) working a treat.

Corker of a wine that from the lovely people at Bodegas Mons Urium.

I really like the eat in offering at Salkara and the quality of that does not seem to have been lost in the takeaway process.
Price wise, it would normally have come in (with delivery) at £33.10 (so a bit more pricey than KK).  I did (as a first time Ubereats customer) get a £10 discount, which took the price down to £23.10.

Deliveries are available all week – with both direct delivery and delivery via platforms including Ubereats and Just Eats.

Two different takeaways via two different delivery methods from two of my favourite places to eat Indian food in Cardiff.

On the flavour front both delivered a very good quality product, nailing the seemingly difficult trick of translating the quality of their sit down food to the takeaway format

Would I order again? Both had glitches (for Salkara the difficulty in actually placing an order on the Ubereats platform and odd items not being available when I managed to do so –  e.g. no rice –  and the delay re delivery for Keralan Karavan), but suspect the first was down to my  unfamiliarity with the Ubereats platform and the second one was down to first night issues and a bit of my legendary bad luck (they seem to have direct delivery running as a well oiled machine, if twitter is anything to go by)  – so I would say yes to both.