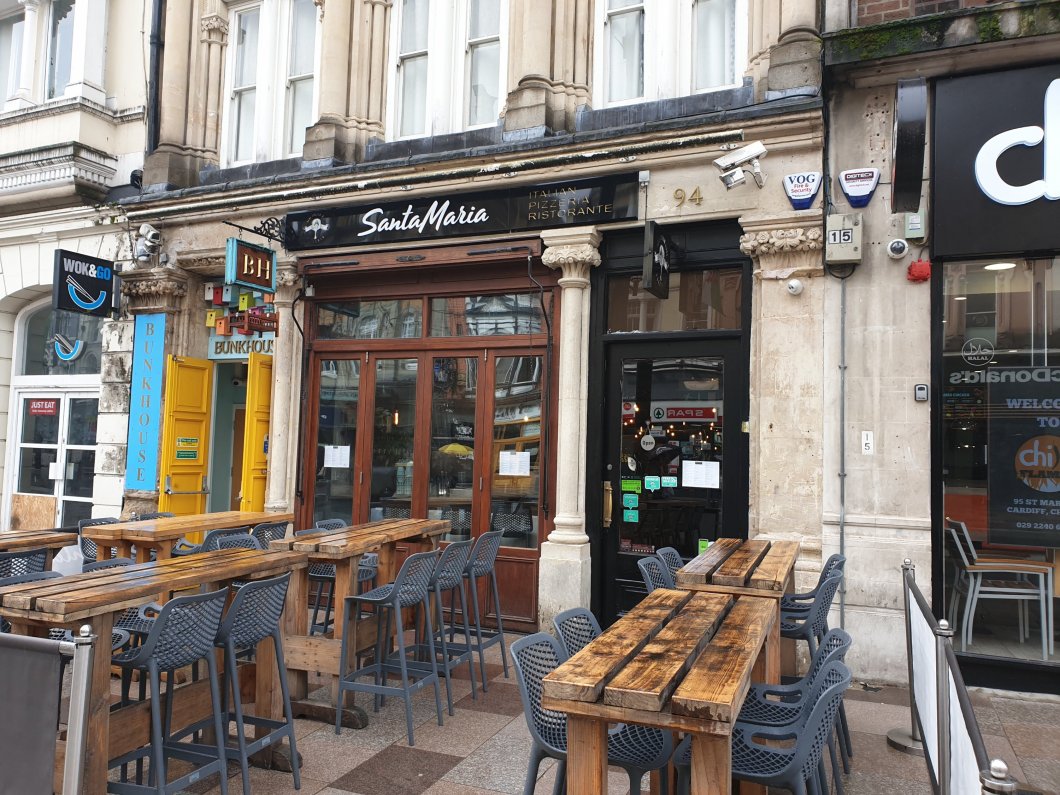 Pizza is one of the foods that Cardiff rather excels in and where Batman and Robin- esque (Adam West’s Batman and Burt Ward’s Robin – for those of my age) superlatives are often well warranted (hence the rather contrived post title).

You have the bricks and mortar brigade with the likes of Cafe Citta, Anatonis, De Mara and the Dough Thrower all of whom I know (or have heard tell from very reliable sources) produce top notch pizzas

Then there are those with semi erections (😬 – is “temporary” any better?) such as the rather fine Fwrnes in Cardiff Market and the legend that is Dusty Knuckle (DK), with their not quite bricks and mortar (but in the case of DK soon to be in bricks and mortar digs at the Warden House with their successful Kickstarter) set ups at the Printhaus.

Not Leafy’s ode to DK (and pizza in general) is well worth a read, but not even Phill Lewis (man must have a tardis – my theory – or has been cloned – Cardiff Bites’ much better theory – as he seems to always be in at least two places at the same time) could get me to eat a pizza (chocolate) with banana on it I am afraid.

A new addition to this rather competitive market (and thus a brave move) is Santa Maria on St. Mary Street (which has taking over the site of the original Nine Yards – now on the Corner of the Hayes and High Street Arcade).

As ever I was visiting on the basis of a lunch time offer, in this case £8.95 for any pizza or pasta dish on the menu with a beer (Peroni, think it may extend also to a glass of prosecco) or a soft drink (can’t quite understand why the price is the same for a bottle of beer or a glass of prosecco as a bog standard coke – non drinker are always punished it seems)

Always wonder what fake Italian pizza is like – must ask Dr. Oetker🤔

On the face of it (soft drink same as beer/fizz aside) not a bad offer if quality is maintained.

The word authentic seems to crop up rather too often on the website for my liking. Personally its use perturbs me a bit, as if you are (and any good) do you really need to actually say it. The food surely should speak for itself shouldn’t it?

Having said that I am very old school with regard to pizza and Italian food in general (with pineapple on a pizza being the work of the Devil and don’t get me started on carbonara and the accursed use by some of cream, not a bleeding carbonara then is it), but I just don’t think use of the word “authentic” guarantees quality at all.

All I care about with a pizza is whether it is good. For that you just need top notch ingredients, a good dough, a bloody hot oven and someone making it who knows what they are doing (that person can be from Mongolia for all I care). Job done, but very much a case of easier said than done.

One of the usual chaps from work and a new inductee to the grumpy, relatively old, sod society (aka “GROSS” – the others would argue the membership is only one i.e. me and that it should, on that basis, be GOS) decided to test out this offer.

The tables set up outside make for a nice area for al fresco dining if the weather is clement, alas our visit was during an April shower and inside it was for us.

As with the previous Nine Yards incarnation, it is a challenging space with a long thin corridor 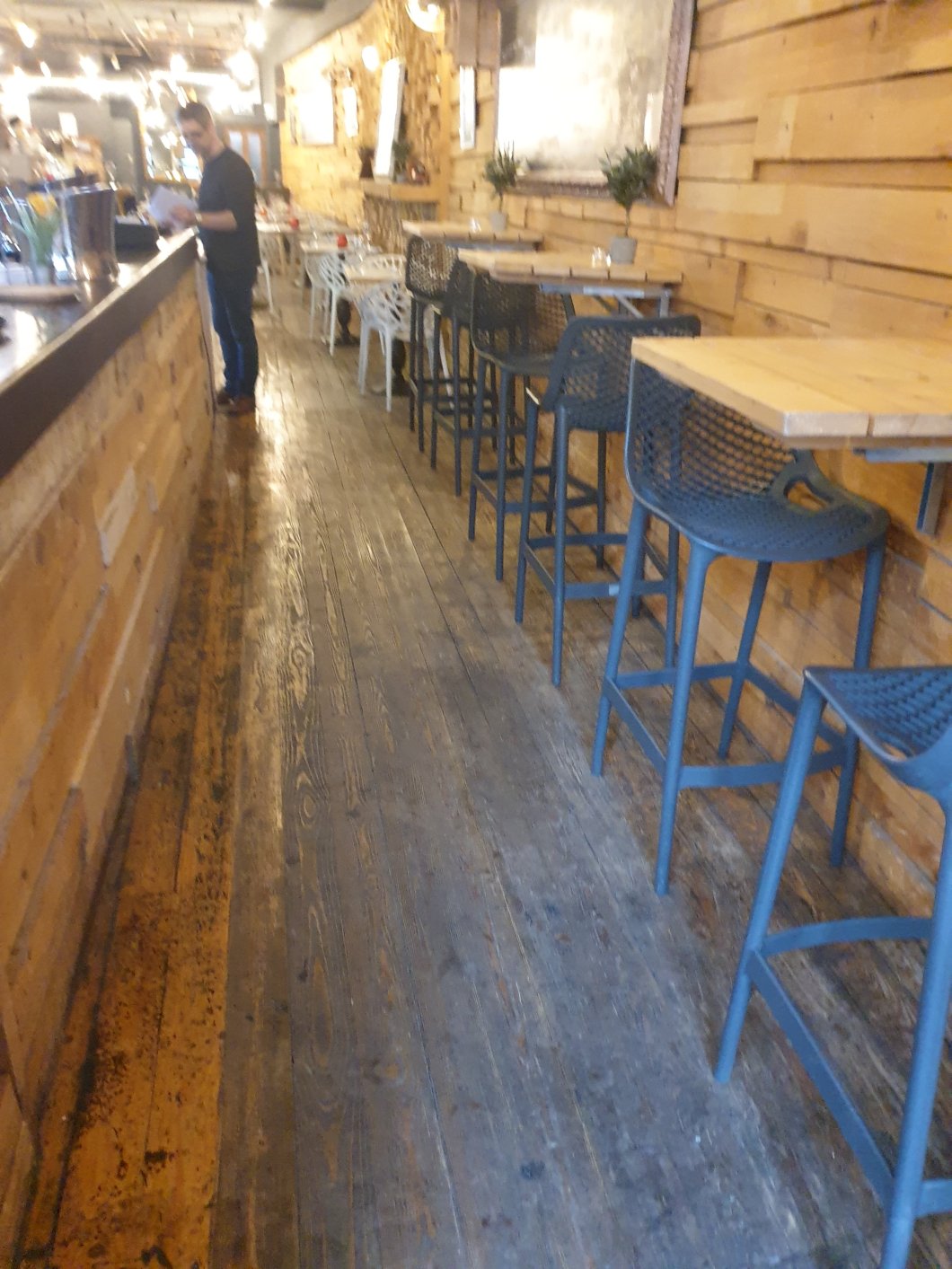 opening out into a reasonable sized area.

They have packed the tables in a bit, with tiny tables for two all the way down the narrow entrance corridor, but it is a nice enough space. Care needs to be taken with the somewhat rough hued wood cladding on the walls – looks a bit of a splinter risk to me (serves you right, mind, if you run your hand or head along it – ok yes I did, hand not head, and no I didn’t get a splinter if you were wondering/hoping). 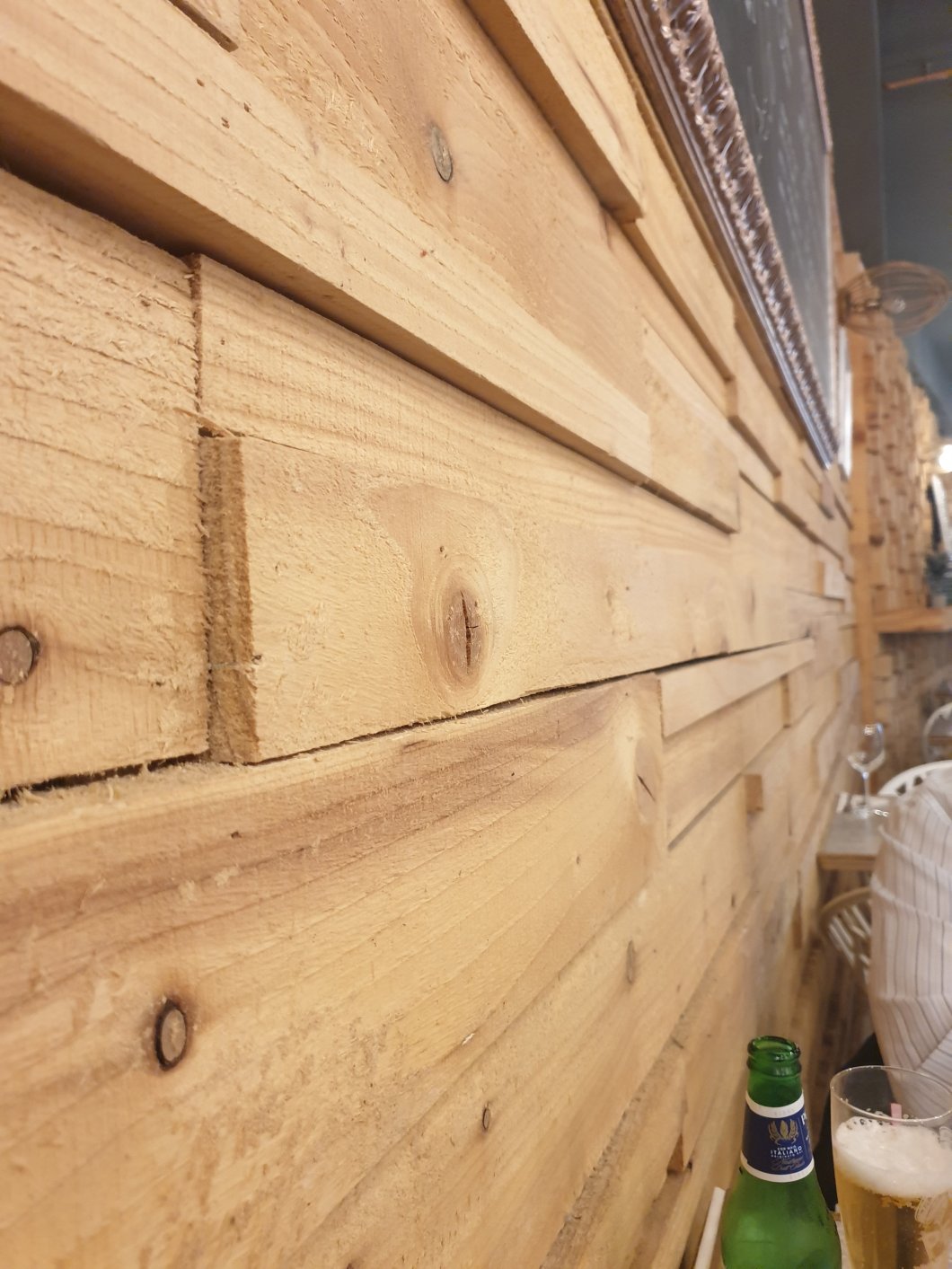 The lunch menu offer, rather surprisingly but gratifyingly so, isn’t limited to certain pizzas and pasta dishes on the menu with all items listed under the pasta and pizza headings in play (and not a supplement in site – bravo for that). 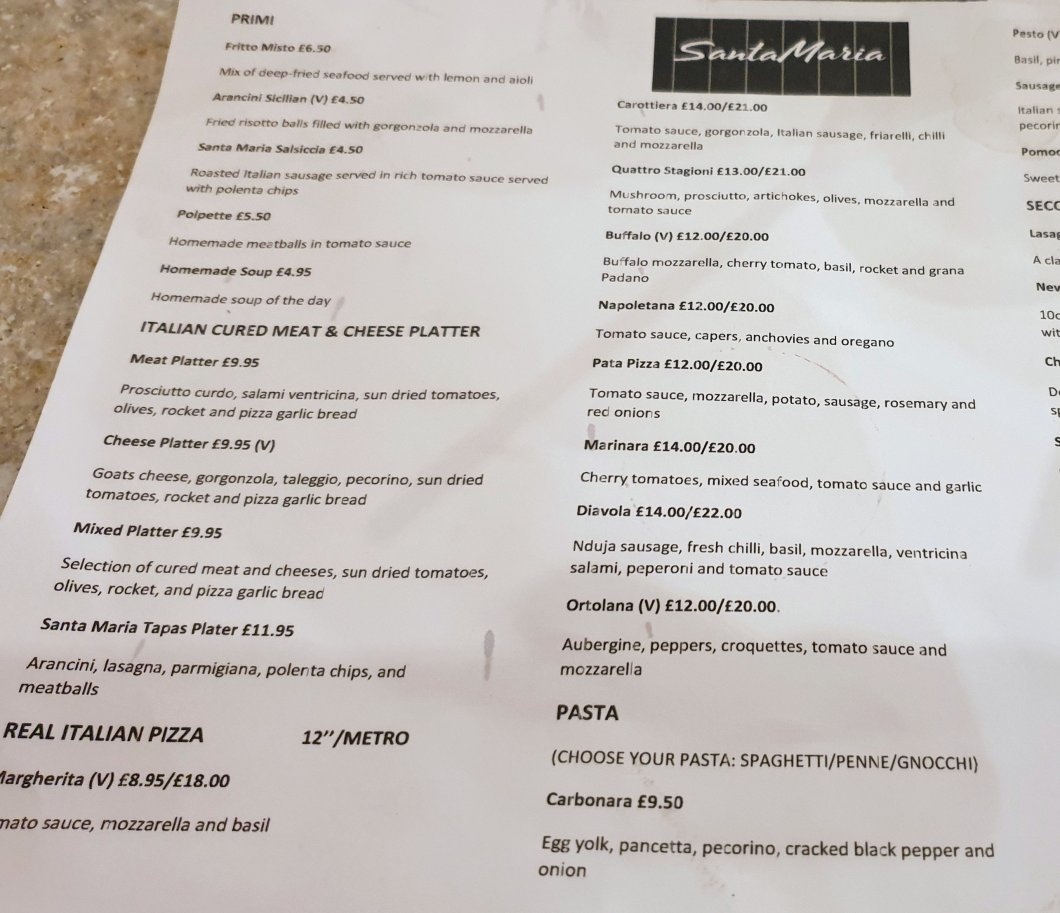 Nice selection of pizzas, with not a pineapple in sight (thank the Lord), priced (outside the offer) at between £8.95 for a basic margherita and £14 for the diavola and the marinara.

It is also gratifying to see (in the pasta section) the carbonara has no reference to cream and uses pecorino romano cheese. If I was being ultra critical (not like me 🙄), I would say it should only ever come with spaghetti (here options were spaghetti or penne or gnocchi – if you order the penne we probably can’t be friends and if you order the gnocchi for your carbonara then you are dead to me I am afraid) and it should really be guanciale rather than pancetta.

The wider (outside of the offer) menu looks good with the likes of some fine sounding antipasti, fritto misto, polpette and arancini ( “The Octopus Diaries” has tried these and, based on her Twitter and Instagram feeds, seemed to enjoy them). 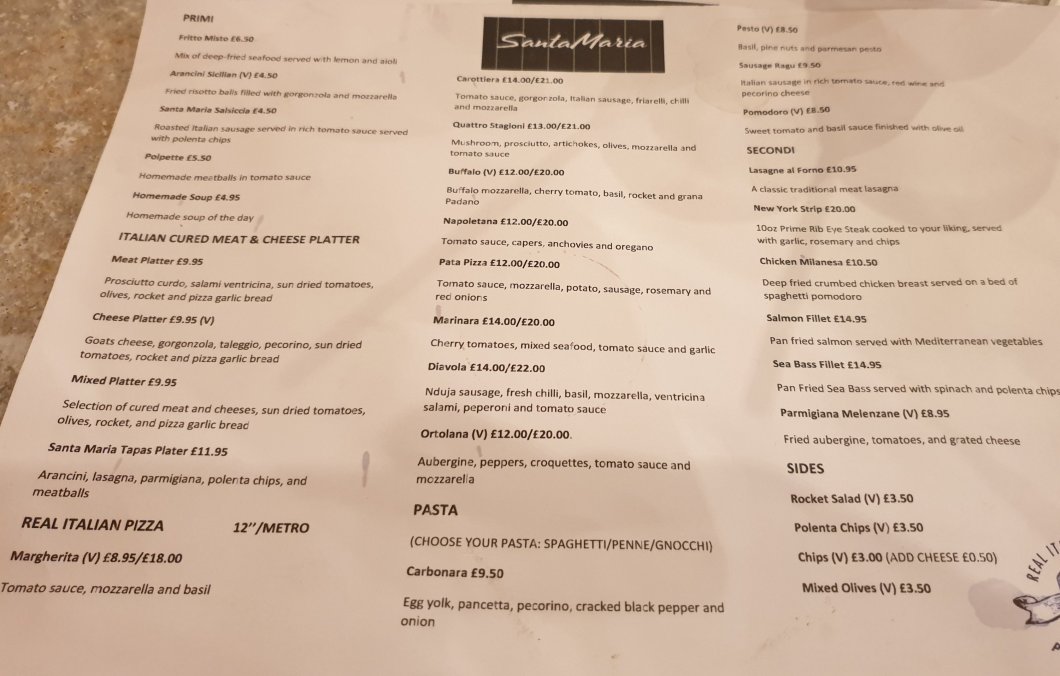 We stuck to the fixed price lunch menu and I went for the rather fine sounding pizza carottiera (with toppings of gorgonzola, Italian sausage, friarelli/rapini, chilli and mozzarella).

Fine looking pizza this, with a good base.

The topping were of generous proportions, with a copious covering of creamy mozzarella (the proper stuff) and a distinct salty, sour, hit from the gorgonzola. The Italian sausage and chilli provided a pleasing back note of heat and I rather enjoyed the slight bitterness of the rapini. The all important tomato sauce bought a nice rich sweetness, balanced by a touch of acidity, to the party.

The base was how I like it, with a nice char, a crispness to the bottom and a good chew. 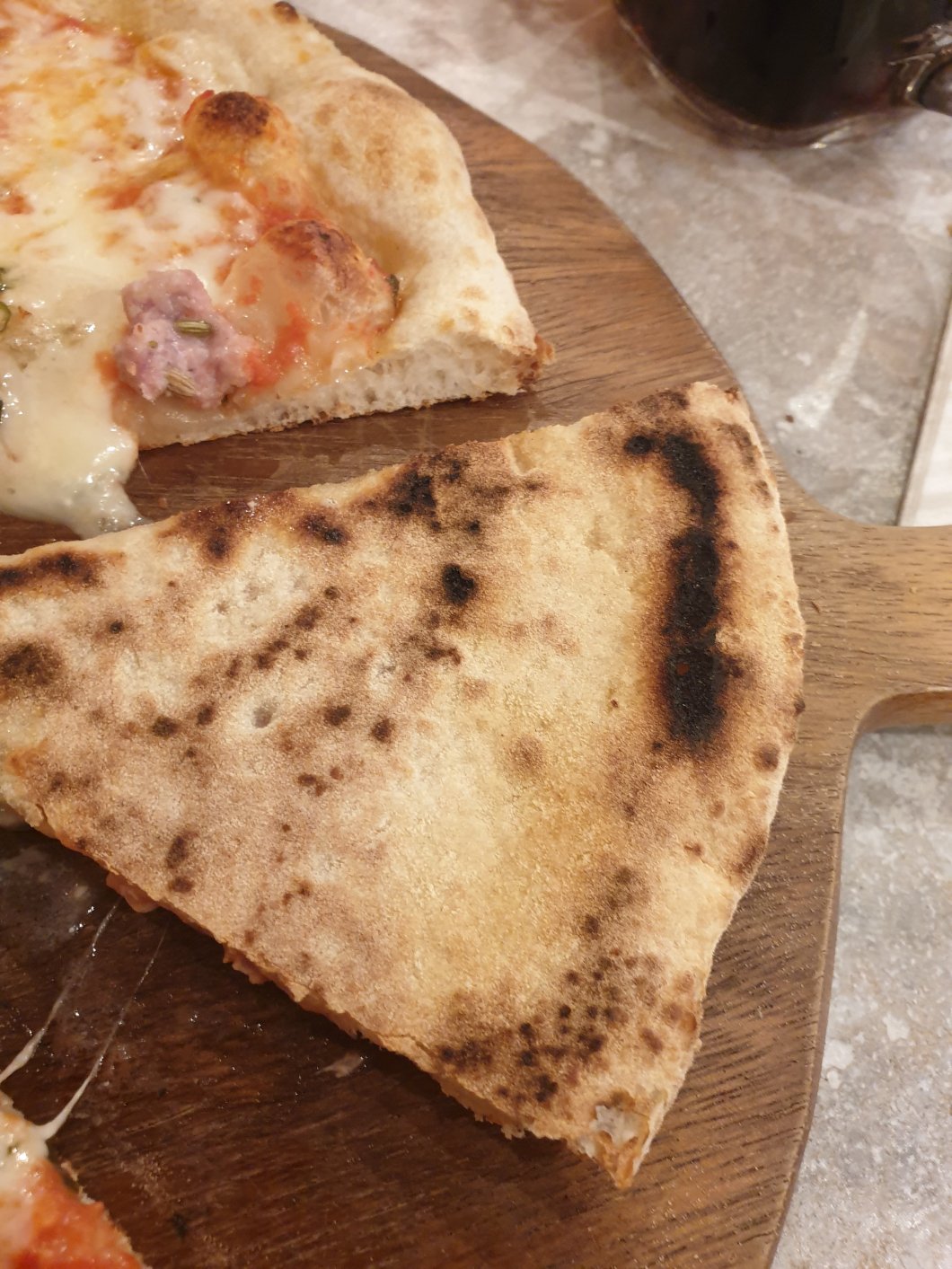 Whilst the base could have been just a touch more aerated, perhaps, this was a good pizza.

One of the other chaps had an equally good diavola pizza, which had some quality charcuterie on it and not a little bit of heat from the nduja and chilli.

Both pizzas (at 12″) were big old beasts and very filling for lunch. Great value at the deal price I thought.

The final dish ordered by our party of three (two of the usual suspects couldn’t make it – I cocked up the appointment) was a pasta one, in this instance pesto with penne (£8.50 if bought outside of the deal).

The pasta was nicely cooked, with it retaining a bit of a bite, but not too much so. The sauce (I was told) was very good, but more cream based with pesto as a component rather than the main event. He was rather expecting it to just be pesto (as was I). With the more minimalist pesto element a bit of grated parmesan to put on it would have been nice. He didn’t ask nor was any proffered.

On this showing, I think the pizzas here are the best bet for lunch (purely on the basis of one visit mind).

One point to note is the sign advertising the offer is not always on display outside (my pic. was taken on a different day from our visit, with the sign not being out on the day of our visit) and the menu we were given made no mention of the offer at all. We asked if it was on, to be sure, before ordering and I think they should always have the sign outside and have details of the offer on the menu.

They did say details of the offer are on their Fackbook page, but I bet they miss a bit of walk in trade by not putting the sign out/the deal on the menu.

The offer includes a drink, with it being either a bottle of peroni, a glass of prosecco ( I think the latter is included based on what’s stated on their Facebook page) or a rather limited choice of soft drinks.

I had a coke (I asked if they had any San Pellegrino fruity sodas, but was told they only had it as water) for one of those bar siphon thingies. As is always the case with the soda syphons drinks, it was flat and syrupy sweet. For some reason it came in a jam jar with a handle.

I wish I had ordered the peroni.

Our new GROSS inductee wisely went for just that

and was very smug about it.

Personally think they could widen the soft drinks offer to cover a bit more. A can of San Pellegrino must be way cheaper than a bottle of peroni or a glass of prosecco, so why not include one of them in the soft drinks selection.

Outside the offer there is a wider booze offering and if you find water too strong there is always Coors light (it rhymes with something else for good reason).

The wine looked OK, if a bit limited bearing in mind the myriad of grapes and wines on offer in Italy, 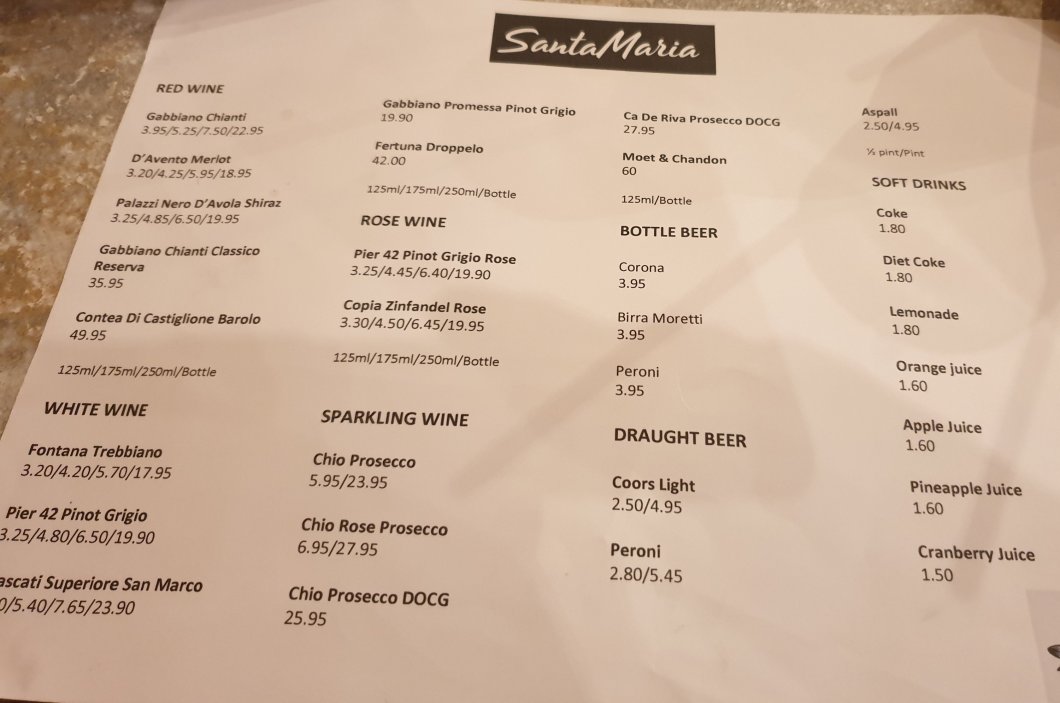 and as per usual prosecco is in abundance (people should really try franciacorta – a much better Italian fizz in my opinion) .

Mark ups are not excessive, at least at first sight, with the Chianti Classico Riserva on the list at £35.95 retailing at £17.50.

I was rather impressed with the lunch time offer at £8.95 with a drink. It is a pretty good pizza at the full price and a very good one at £8.95 even without a drink. If you add a peroni or a prosecco (would be nice if they could ip their soft drinks game a bit), it becomes a very good deal indeed.

Would I go back? Absolutely – cracking deal.