Funny word hash, with a seeming myriad of meanings – some good, some bad. Making a hash of it – bad, hash as in cannabis – either depending on your point of view and hash as in a dish of cooked meats cut into small pieces and then cooked again with potatoes – good if done right, bad if not. It is, as a result, perfectly possible to make a hash out of a hash (see my thoughts on Servini’s effort).

For this post, I am talking about the hash that is part and parcel of that (beloved by many) meal (a hybrid of breakfast and lunch invented as usual by us Brits back in 1895 and rehashed by the Yanks with more pizzazz) known as brunch.

This brings me to Kin +Ilk’s second premises in Cardiff in leafy Pontcanna (the other one, which I have already looked at and very much liked, is in the Capital Quarter) to which a beautiful Indian Summer September day brought Mrs. SF and I, with 3 dogs in tow, for refreshment midway through a Sunday morning walk.

It is a nice enough space, quite minimal and Scandinavian in appearance inside (perhaps a bit office breakout area, if I was being mean spirited), 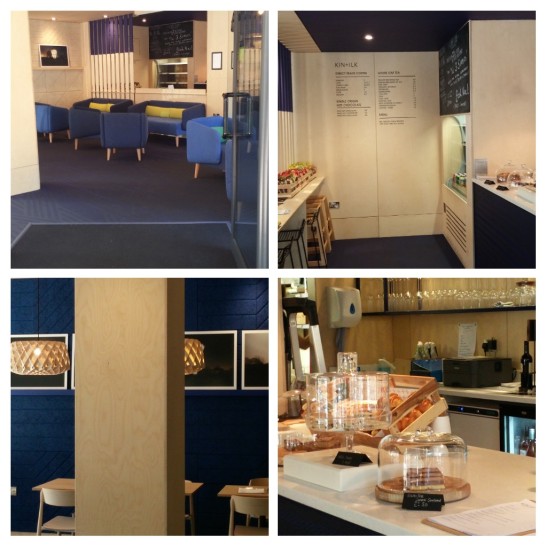 with a large patio outside which was perfect for the day of our visit. The doggies got a bowl of water, unprompted.

With three hot dogs, one we were looking after

this was greatly appreciated.

The weekend brunch menu offers a good mix of the healthy and perhaps not so healthy.

As the title suggests, I went for the very nice sounding chorizo hash (£6.50).

This was a really rather good hash, with a nice contrast of both flavours and textures. Perfect mid. walk fuel.

Mrs. SF toyed with the healthier options on the menu, but was drawn to the American pancakes with bacon and maple syrup (£6)  Mark my words,  give it 10 years and we will be being told this is a super food combo – with the only issue being not enough bacon fat and sugar – and that granola and its ilk is absolutely lethal stuff.

The American pancakes had a lovely light and fluffy texture despite being permeated by maple syrup and the addition of three decent sized rashers of bacon made for a nice contrast of salt and sweet. Could have, perhaps, done with a touch more maple syrup – but if I was presented with a swimming pool of maple syrup I would say that!!!

Other food on offer include a nice looking weekend menu

and stuff to nibble on in the evening.

Breakfast and lunch are on offer in the week, as well as the evening nibbles. All look rather nice.

On the drinks front they have a good selection of hot drinks. 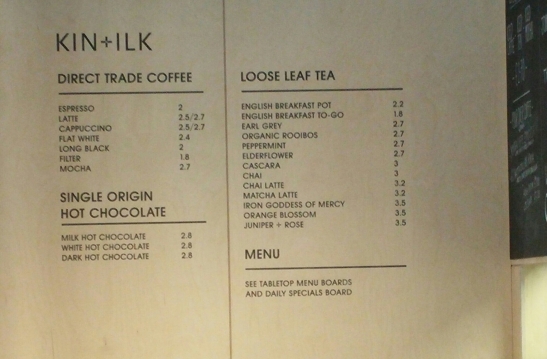 I went for a flat white (£2.40) which had a nice rich roasted flavour, with very pleasing caramel backnotes.

Mrs. SF had a cappuccino (£2.50) and on ordering I was initially flummoxed by the question of “chocolate or not on top?”. You order at the counter, rather than it being table service, so did I risk it based on not being arsed to go outside and ask Mrs. SF?  This dilemma was nicely sorted by the server saying he would bring it out with the coffees. Expecting the usual shaker pot what we got was a chunk of chocolate grated directly over the cappuccino (Mrs. SF wanting chocolate on it). Nice touch that, I though. 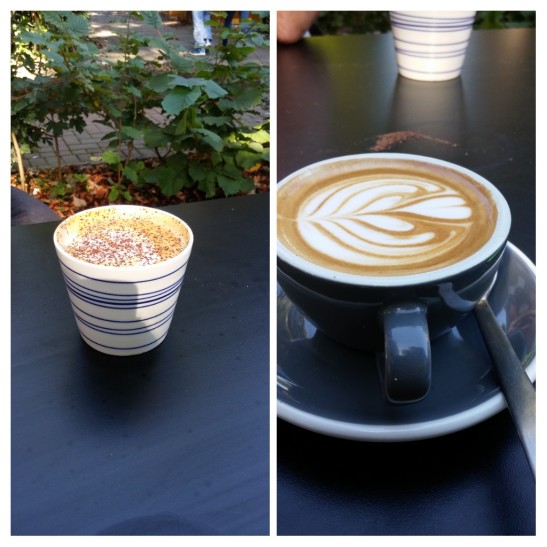 Booze is available in the form of beers and wines, with the wine list looking nicely judged. Can imagine nibbles and a bottle or two here would be very nice

As with their Capital Quarter premises, I very much like Kin +Ilk’s Pontcanna base. Nice food and coffees (and being doggy friendly, at least in the external area) makes for a perfect mid walk interlude if the weather is not too inclement.  Decent value (if not cheap) at £17.40 all in.

Would I go back? Definitely – great spot for a Sunday brunch and I think we will try it in the evening too (it is a tad under half way between work and home).