Something totally fishy about this – Lee Skeet’s, Cornish Seafood box.

I always thought it odd that the word fishy is used to denote something dubious or suspicious. Perhaps it stems from the oddity of an Island nation that seems to shuns fish unless it it breaded or battered (actually it is very logically down to old fish smelling fishy and no one wants very old fish).

To me the bounty of the sea is a gift from the gods and I have an almost Basque (the masters of fish cookery in my opinion) passion for fish and shellfish in restaurants.

We have some of the best seafood in the world – Scottish langoustine, Morecambe Bay shrimp, Norfolk (Cromer) crabs, Scottish or Cornish Lobster, Penclawd cockles, Cornish (Porhilly) and Kent (Whitstable) oysters and Dover sole to name but a few and will (inexplicably) export (or at least we did) most of it.

It always surprises me when I am in Spanish pescaderos (been a while mind) to see the quantity of stuff on display and then noticing that an awful lot of it comes from UK waters (less so now I suspect).

We should all (in the UK) eat more fish (sustainably sourced rather than vaccumed up into super trawlers) and the latest venture from Lee Skeet (a Cornishman now in Cardiff, with an enviable CV as a chef) is seafood,  sourced from contacts he forged as a chef, delivered to your door.

A mix of fish and shellfish, this is the sort of package that is right up my Mariana Trench. As a result, an order was put in a week before for delivery on a Friday.

It came in a well insulated box packed with goodies, including booze, various fish and shellfish, an oyster knife (an accursed thing – more on that later) and dessert. 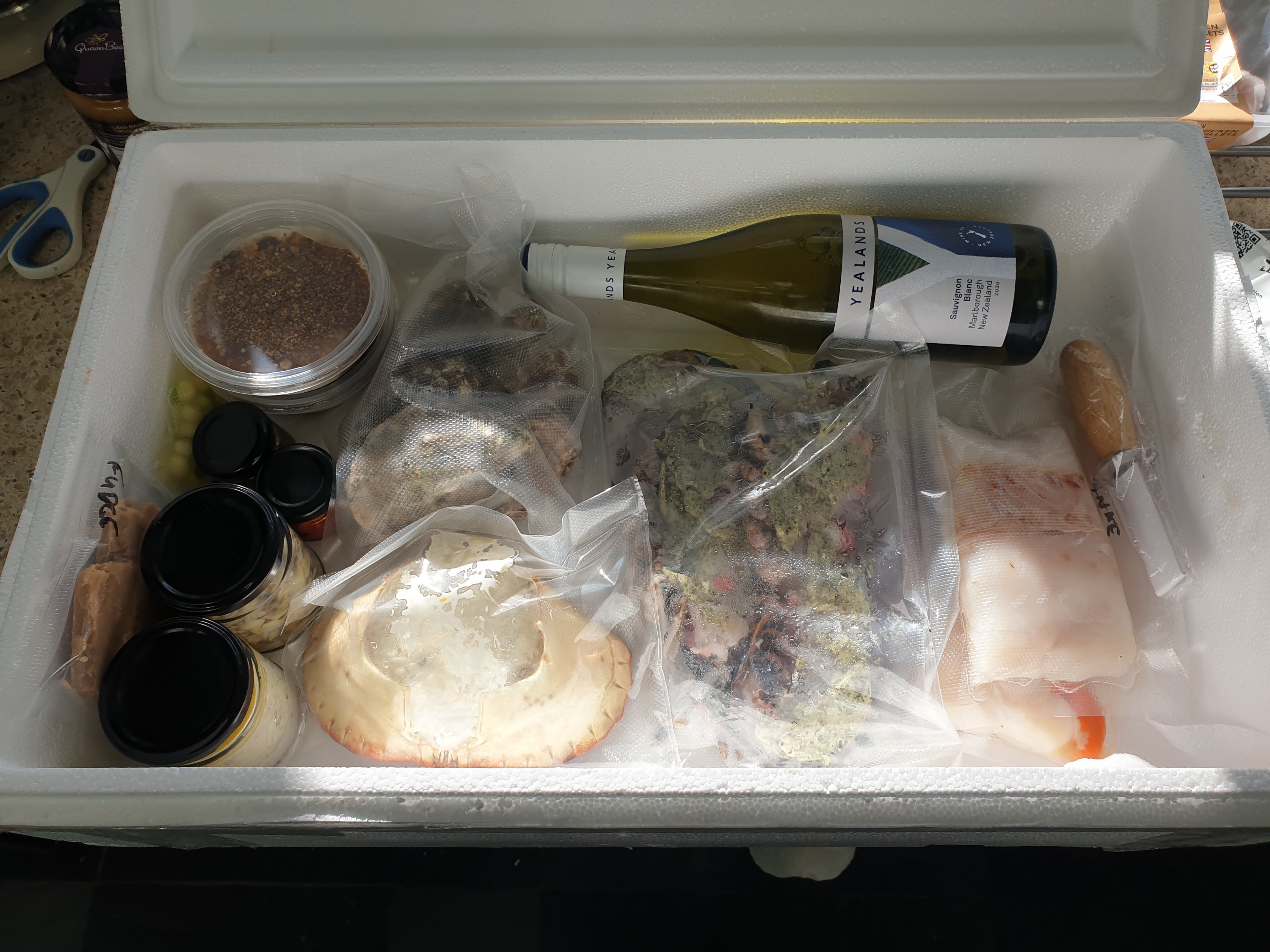 There were also info. in terms of the stuff that needed to be cooked, but much of this was free form (i.e. you go for a recipe and this provides you with top notch base ingredients to get you started).

First up were the oysters, with an oyster knife to shuck them with thrown in.

It seems there is a knack to opening an oyster and, unfortunately, I am about as cackhanded as they come and boy did it shown in my butchering of the oysters. At best I suppose I should be grateful I didn’t stab myself and end up in A&E!!!

Made an absolute pigs ear of them (sorry Mr. Skeet 😬, not sure I would have done a worse job if I had gone at them with a claw hammer – which was definitely contemplated at one point), but they tasted very nice, with that ozony brineness that is the very essence of the sea.

They came with two condiments, one a vibrant caper number and the other a chilli number. 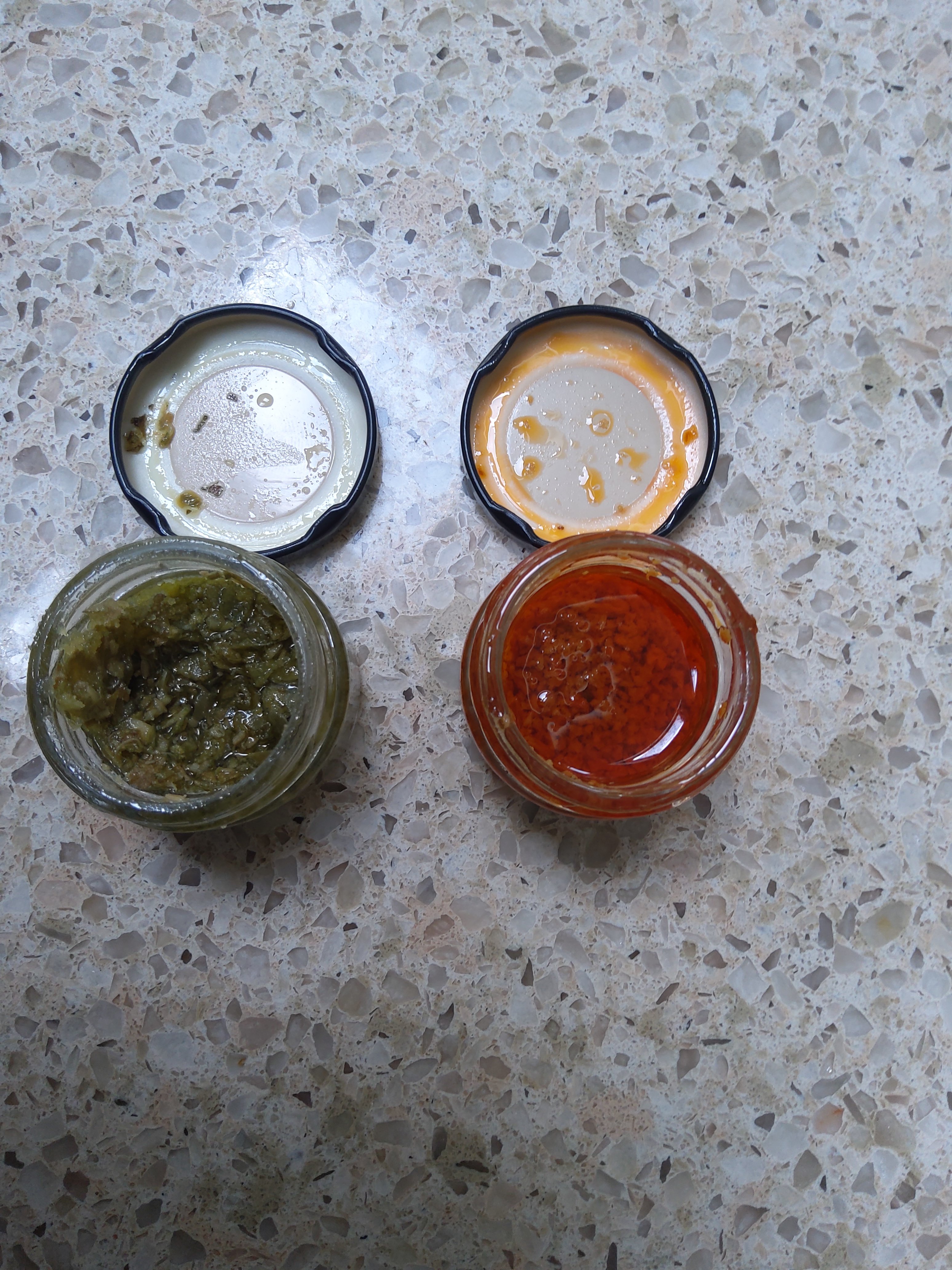 In my relief at finally managing to jemmy one of the stubborn buggers open (the air was positively blue), I was very generous with the chilli number on one bi-valve which nearly blow my socks off. I readily admit I am a total chilli wuss, but I would say apply this stuff  with extreme caution – a little goes a long way!

Next up were the scallops, which I cooked in the oven with crispy serrano ham and a dry (rather than wet) gremolata.

You don’t get the caramelisation you get with pan frying but the natural sweetness of the scallops was lovely with the saltiness of the crispy ham and the fresh zestiness of the gremolata. Good textural contrasts too. In hindsight it may have been an idea to have added oil to the gremolata and a splash of wine to the mix, but heyho. 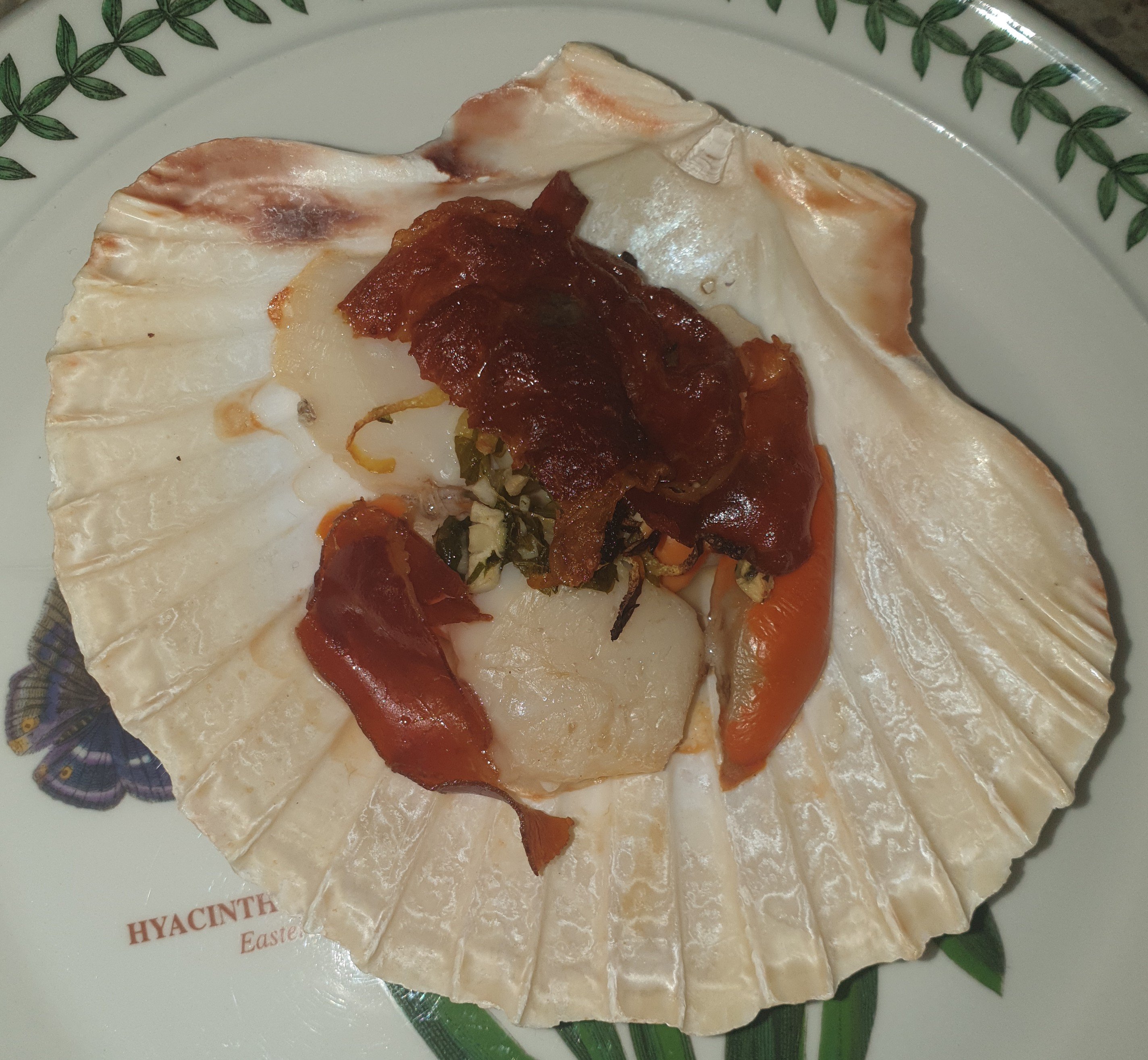 The shellfish theme continued with a sharply dressed crab. Loads of sweet white meat here, with a really good mayo binding it all together, lemon to temper  the richness and plentiful herbs running through it. 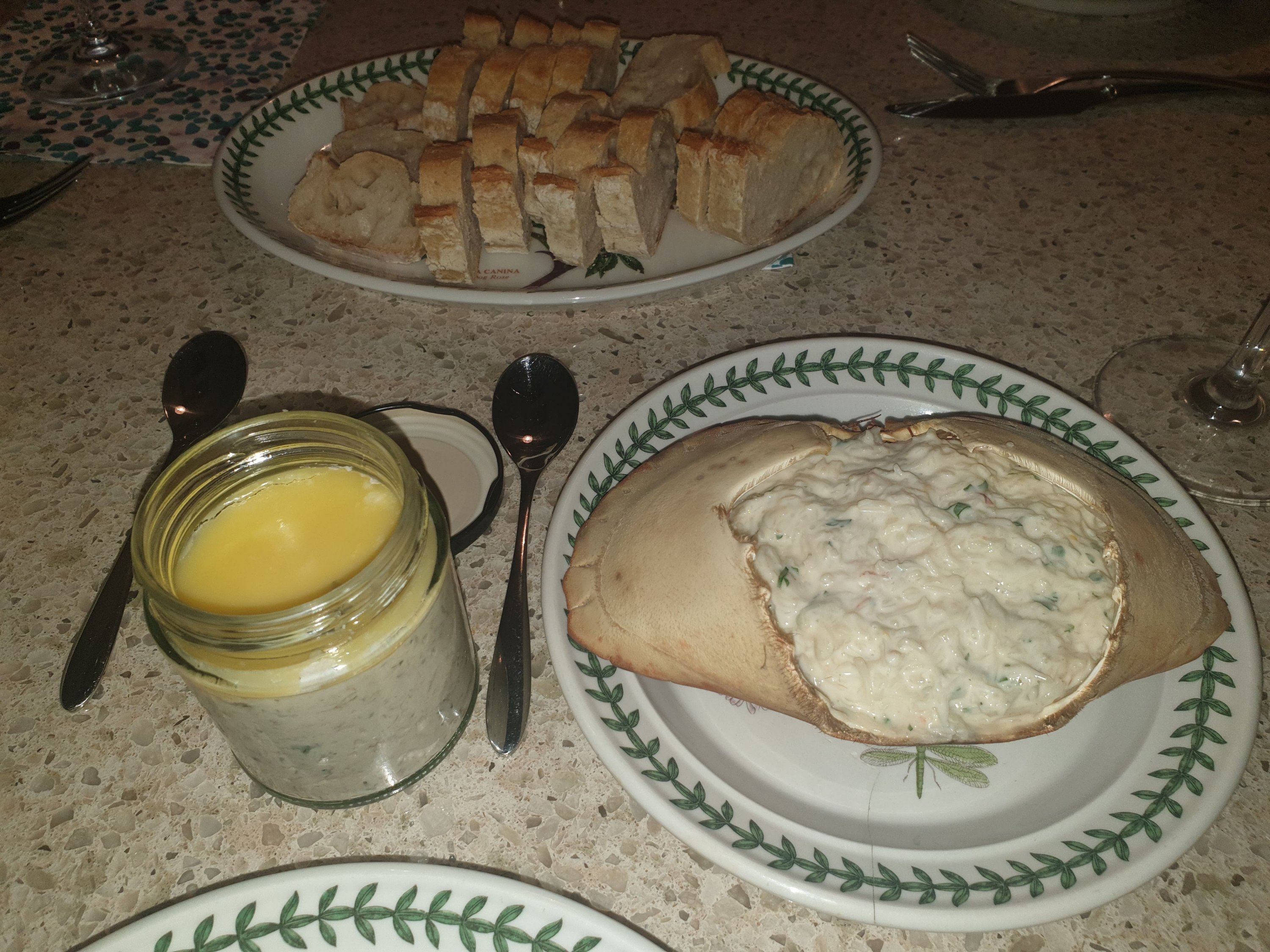 My only slight quibble here was the absence of any of the brown crab meat in the mix. Personally I like the intense flavour punch you get from brown meat. Don’t need much, but I think just a touch here would have given it a futher lift.

Smoked mackerel pâté was just lovely, with a really good ratio of fish in the mix and the smokiness complimenting the flavour of the mackerel rather than dominating it. Could have eaten this stuff by the skip load.

Mackerel is such an underrated fish and it was good to see it featured more than once here.

I love the look of mackerel fillets, just beautiful – nature’s artwork at its finest, and here they were spankingly fresh with not even one pin bone.

I made a recheado masala (Rick Stein recipe, that was heavy on the ginger and vinegar), with that being the sandwich filling for two mackeral fillets.

The sharpness of the vinegar and punch of the ginger worked a treat with the rich oiliness of the mackerel. Done under the grill, these would have been even better on the BBQ (will definately be keeping this recipe for BBQ season).

The main event lobster, was saved for later, with the box easily enough for 2 x 2 meals.

If I am honest I am more a crab/

than lobster man and have never quite got the hype regarding lobster. Having said that this was a very nice lobster.

A very decent size, with sweet meat (plenty of it) and a nice herb butter. A treat if you are a lobster lover and, despite my usual crustacean preferences, I really enjoyed it.

With the lobster, I did double cooked chips

and a rocket salad. Very nice they were too with the lobster.

The final substantive item in the box were some brined hake fillets. 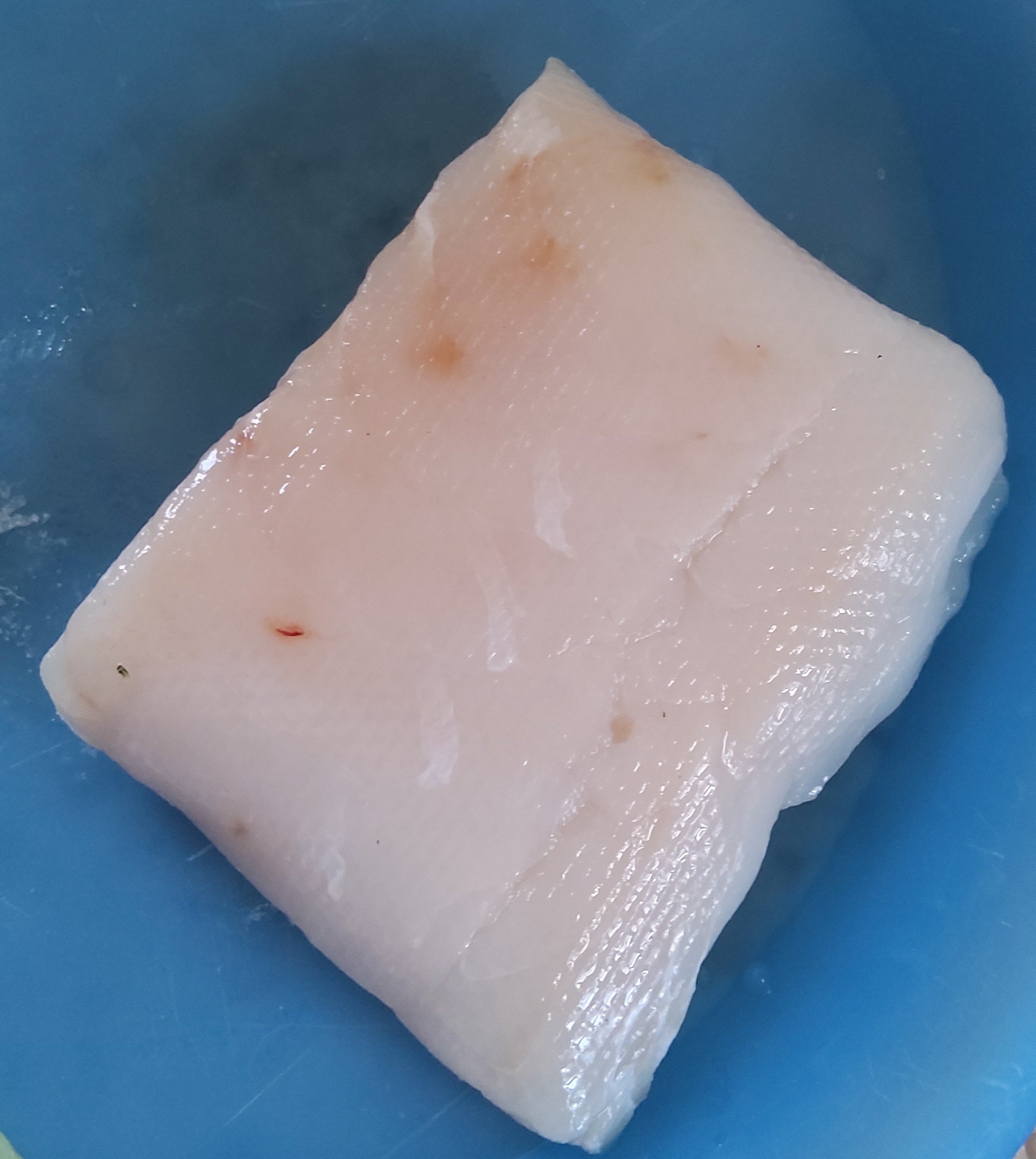 For the hake, I  made up a dish which entailed wrapping the fish in serrano ham with herbs (Thai basil was to hand, sage would have been my preference).

I then pain fried them and finished them off in the oven.

Thought this worked really well – was a beautiful bit of fish.

I didn’t take any photos of either the jar of pickled cockles or the cheesecake dessert. Both had the same attention to detail that characterised this box.

The box came with a NZ sauvignon blanc, but with the oysters and the scallops we kicked things off with the Bar 44 Manzanilla. 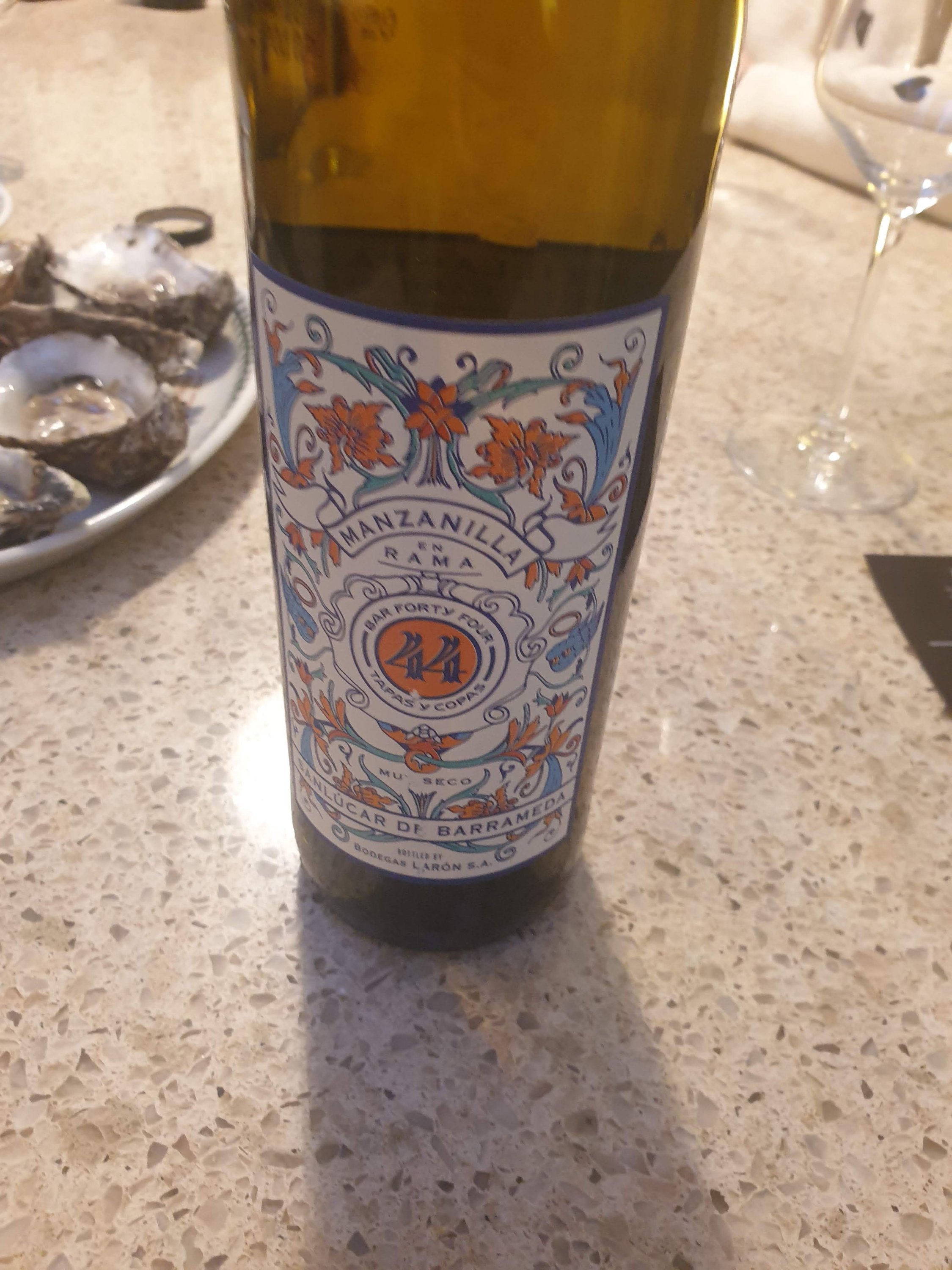 Cracking stuff, with its briney notes as well as green olive, crisp green apple and almond working a treat with the shellfish (perfect pairing with the oysters). This can be got (when back in stock) from Mercado 44 for around £17 a bottle. I think it would have worked with every dish here.

With the crab and the mackerel, we went for a glass of the wine that came with the box

I am not a huge NZ sauvignon blanc drinker. Perhaps I have not drunk the right ones  but I tend to prefer a Loire Valley sauv. blanc if  I’m honest.  Not really my poison this, with too much of gooseberry sucker punch for my taste. If you like a NZ sauv blanc, though, this may for you (price ranges from £6.95 from Iceland and £9/£10  from Majestics)

For the lobster and the hake, I opted for a Galician white (majority godello blend). 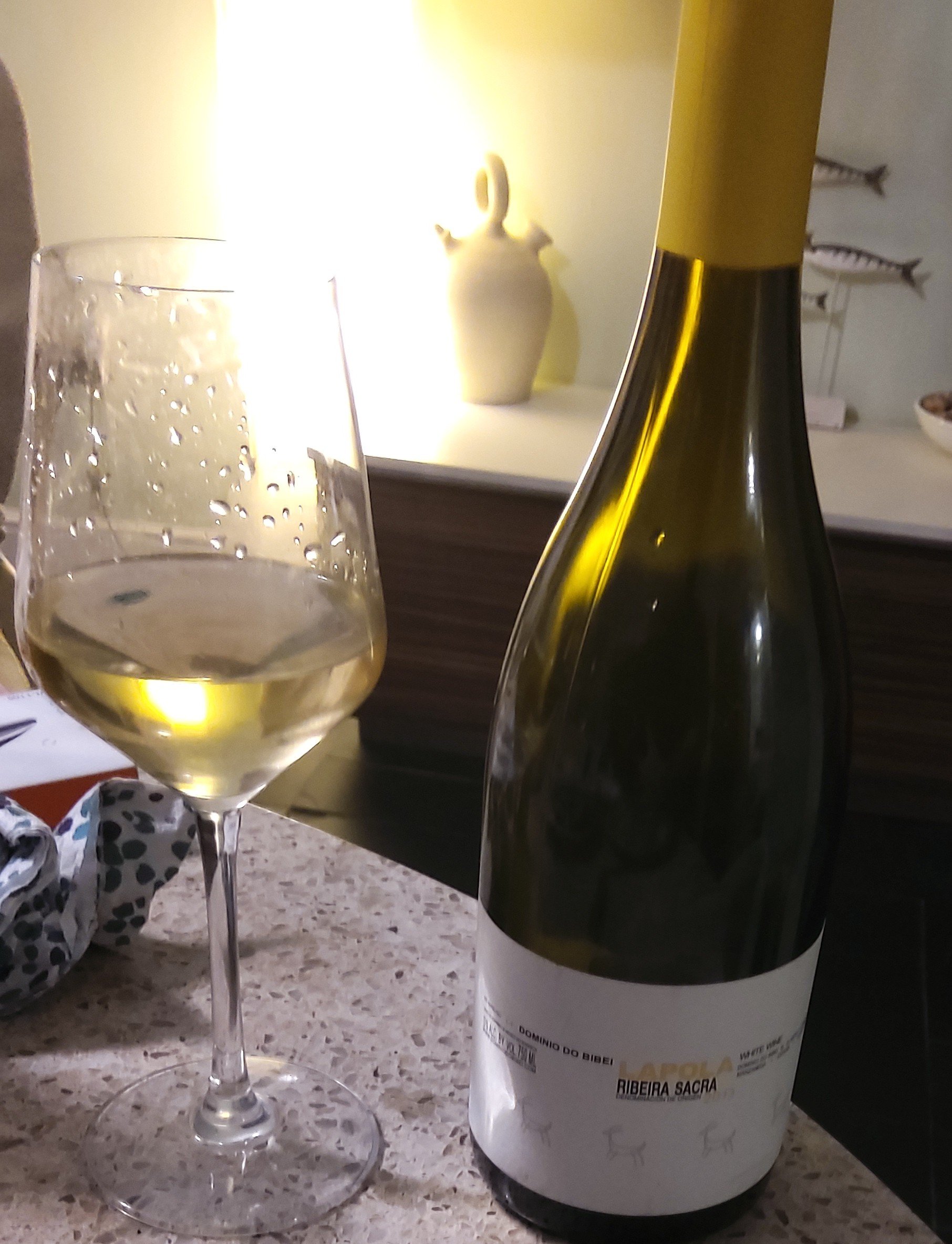 Lovely drop, this Dominio Do Bibei number – rather aptly from Bin Two in Padstow, with a flinty minerality on top of citrus, honeysuckle and just a touch of nectarine sweetness on the finish. At £20+  not cheap, but seriously worth it.

Really enjoyed this seafood box, despite my battle with the oysters.   Nice combination of top quality ingredients, with the ability to free form with those ingredients (particularly the fish).

Not cheap at £100, but I think worth it with the quality and quantity of ingredients.

Would I order again? Yes, excellent bit of kit. I do very much hope, however, that we (by that I mean me) can try Mr. Skeet’s food with him cooking it. Hopefully not long now, with it being on the cards at the end of May for indoor hospitality to reopen (halle – bloody- lujah) and it seems bookings will be open for Mr  Skeet’s  very highly rated supper club dinners from the end of May (which is very good news indeed).

Orders are via the following web site:

They are resuming deliveries (orders are already live) on 9/4 with some new and very interesting options, including this lovely sounding BBQ box ( absolutely love red mullet)