Beets an ordinary burger? Got No Beef, Cardiff City centre. 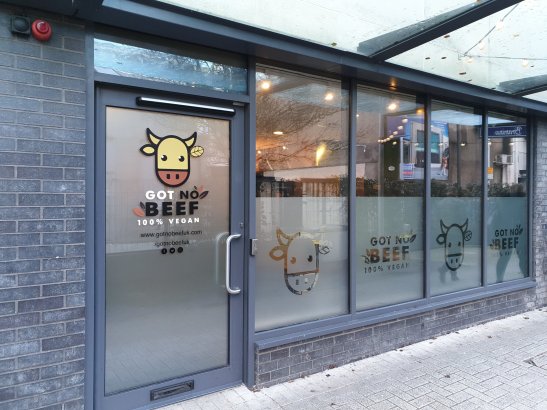 January is the month of New Year’s resolutions. People join up to a gym (then after Jan. never go back), give up booze with Dryanuary (after probably drinking themselves silly in December and probably intending to get bladdered on the 1st Feb. to celebrate/make up for not drinking for a month) and go on diets (which, if I am anything to go by, results in any lost weight being piled back on and some in Feb.)

Then there is Veganuary (been around for a while, but seems to be getting serious traction now – did people actually queue from 10pm to buy a Greggs’ vegan “steak”, no it isn’t, bake?!), where people who usually eat meat and fish and other animal products stop doing so – rarely 100% I suspect – for just a month.

I often wonder, probably borne out of ignorance, why do people do it? If it is being done on moral/ethical grounds then just not eating meat in January seems illogical as what about the rest of the year and ditto if it is for heath reasons.

Maybe it is a “try before you buy” sort of thing before taking the full plunge into veganism? I have wondered how many stay vegan after doing Veganuary and it seems it is a lot more than I thought!

Personally it seems better to my mind to eat (a bit less perhaps) locally sourced sustainably farmed meat (rather than the crap they sell in the supermarkets) than abstaining from meat for just a month, especially if that means eating Mexican avocados, Peruvian asparagus, Brazilian soya, Indonesian coconut oil and Californian almond milk.

More a case of “Sustianuary” (which should be every month in any event) as oppose to Veganuary, but that is just my opinion (which counts for bugger all).

If I eat vegan or veggie food it is for neither moralistic nor health reasons – I do so in the hope that it tastes nice (all the better if it offers good value).

There are now plenty of vegan and veggie food options in Cardiff with the likes of Vegetarian Food Studio, Greazy Vegan, Anna-Loka, Herbivore and Wild Thing to name but a few.

Most decent restaurants also now seem to have at least one good veggie/vegan dish on the menu, so there is plenty on offer for the occasional or ardent veggie/vegan all year around.

With veggie stuff very much in vogue this month, I noticed on one of my lunch time wanders a new burger joint (or is that veggie disc joint – not got the same ring to it has it) in Cardiff city centre called “Got No Beef”.

I love a good burger, but have to admit I have to date not been entirely sold on any of the veggie patties/discs I have tried (not many, if truth be told).

Greazy Vegan’s Big Moc is a decent effort, but the seitan patty itself is not something I would eat on its own (sans bun, sauce etc. but the same could be said of a Big Mac patty), whereas I would happily tuck into a Hoof smashed beef patty without any accoutrements.

So in the spirit of “Tryanuary” (something I am more than happy to sign up to) rather than Veganuary, I decided to give “Got No Beef” a go.

Quite an unassuming exterior, it is tucked away on Barrack Lane which is somewhat off the beaten track (certainly for me) despite it being pretty much in the City Centre

I suspect they are intending, with the location, to draw in the staff from Admiral. A reasonable strategy, if one probably more likely to reap rewards at lunch time. Footfall in the evening will, I suspect, drop considerably. There is a large student accommodation block near by and also the CIA, which may assist with evening footfall.

Inside it is pretty compact (may be 20 covers), but nice enough. 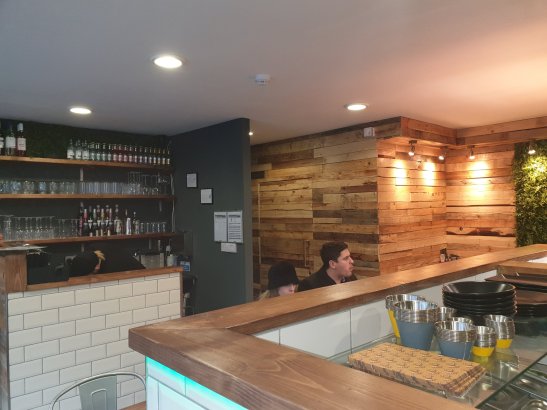 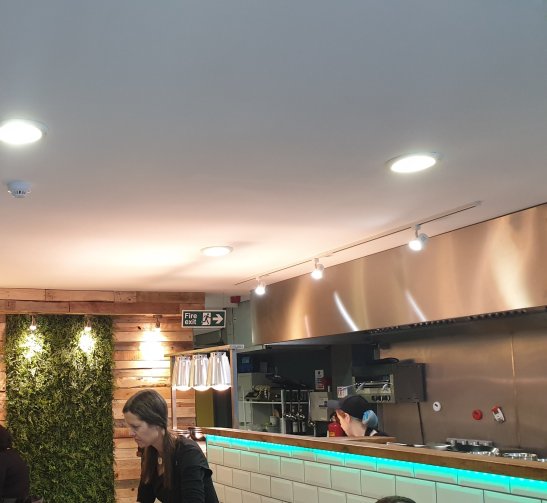 The only issue was the entrance door seemed to have a life of its own and kept on opening involuntarily. This made it a bit parky inside, with both my mate and I retaining our coats as a result.

As with the Greazy Vegan, the focus here is on replication of traditional fast food sans the meat element – in effect mock meat.

So you have burgers (with the patty based on pea protein and having beetroot juice in the mix), hot dogs (from Moving Mountain), fried chick’n (based on soya protein) . 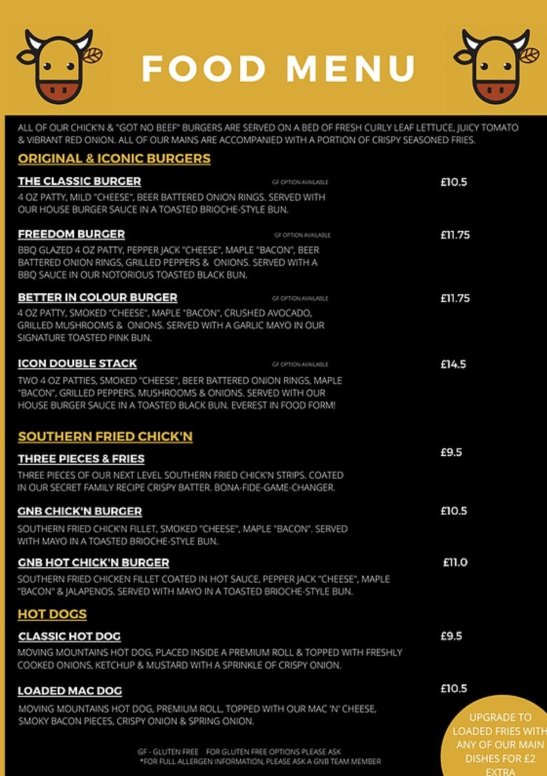 and even a fillet of “not fish” (assumed to also be soya protein based). There are also a number of interesting sounding sides. 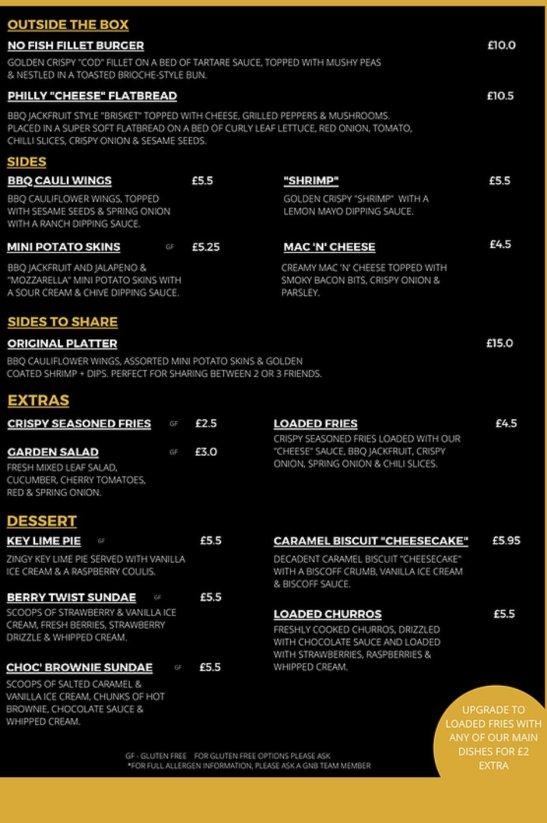 In theory, something to suit all tastes.

Prices (which include fries) seem to be pretty much in line with the higher end meat based burger joints (like Honest) in the City centre, ranging from £9.50 (for the hot dog and fried chick’n) to a whopping £14.50 (for a double stack burger).

I decided to keep it simple (and cheapish – it is after all “Howbloodylongtillpaydayanuary?”), with a view to seeing how the relatively unadorned patty held up.

On this basis, I went for the “Classic Burger” (£10.50), which included vegan “cheese”, onion rings and a side of fries. My mate (not getting with the programme re the blog) followed suit.

The burger certainly looked the part, with a decent stack and gooey “cheese” running down the patty 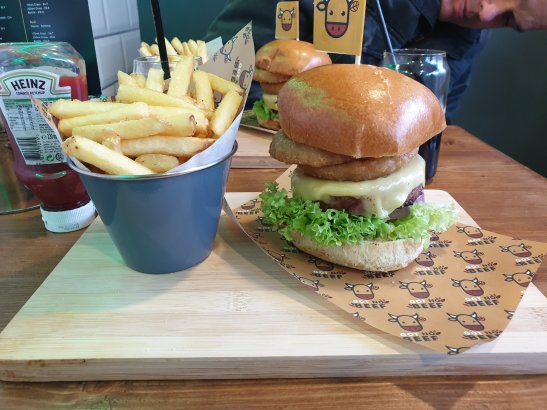 The patty itself was a bit ice hockey puck-esque in shape and lacking those caramelised gnarly bits of a smashed beef based burger, but it tasted surprisingly good and they have even managed to get a chargrilled favour into the mix. 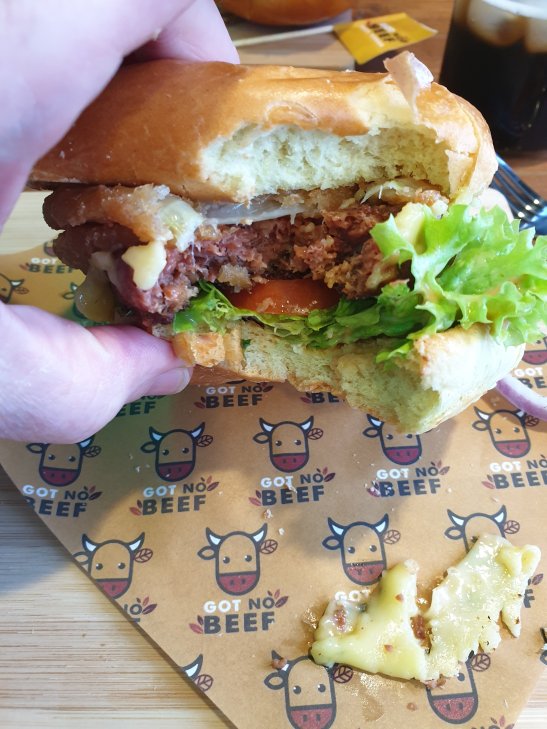 If I had tasted it blind I think I would have probably quessed it was meat based (more pork perhaps than beef), with it definately had a certain meatness to it.

Texturally it was more like a well done burger patty, but it was pleasant enough and even had a look of rareness (from the beet juice) to it.

Much to my mate’s and my surprise we both really rather enjoyed it.

Another surprise was the vegan “cheese”, topping the patty, which I found indistinguishable from cheap American burger cheese slices (which are actually a guilty pleasure of mine) 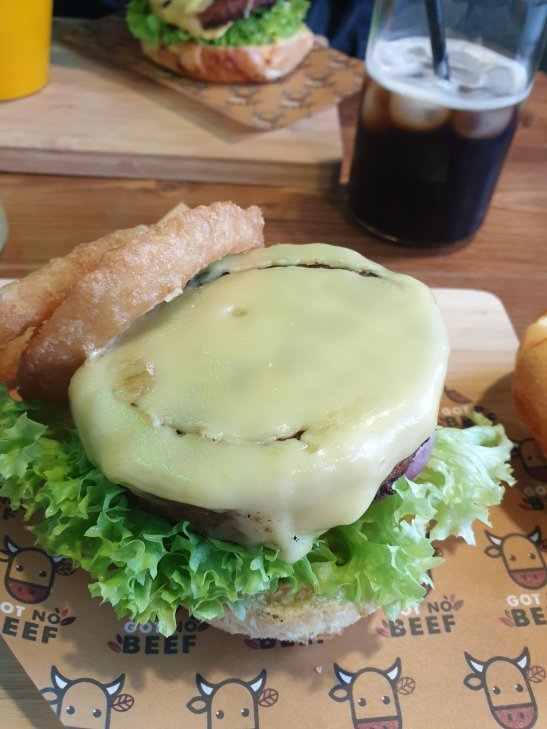 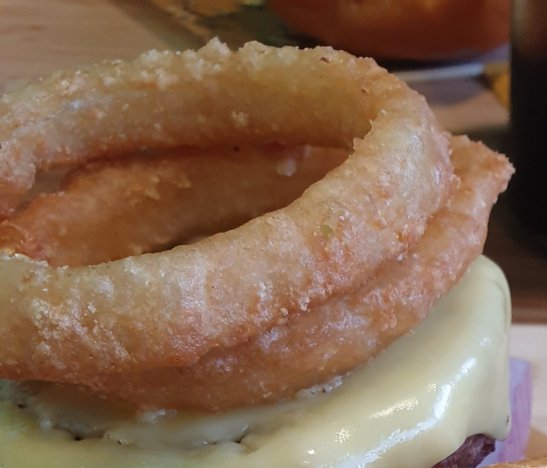 and a toasted brioche bun made for a very enjoyable burger. Only thing I didn’t get was the promised burger sauce – if there was any it was of a non discernable nature. 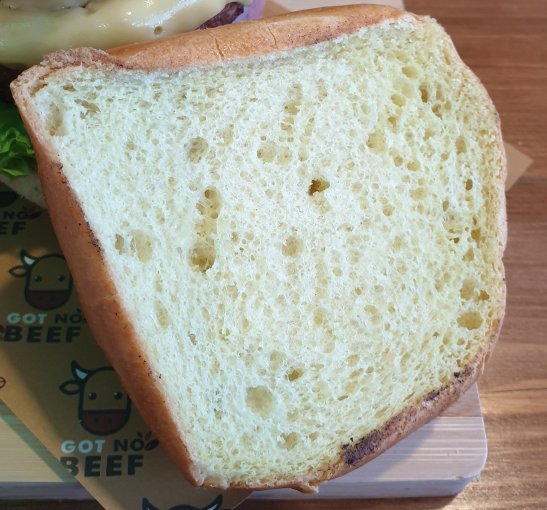 Was it missing from the top bun I wonder?

The burger comes with rosemary fries (you can upgrade to loaded ones for an extra £2), 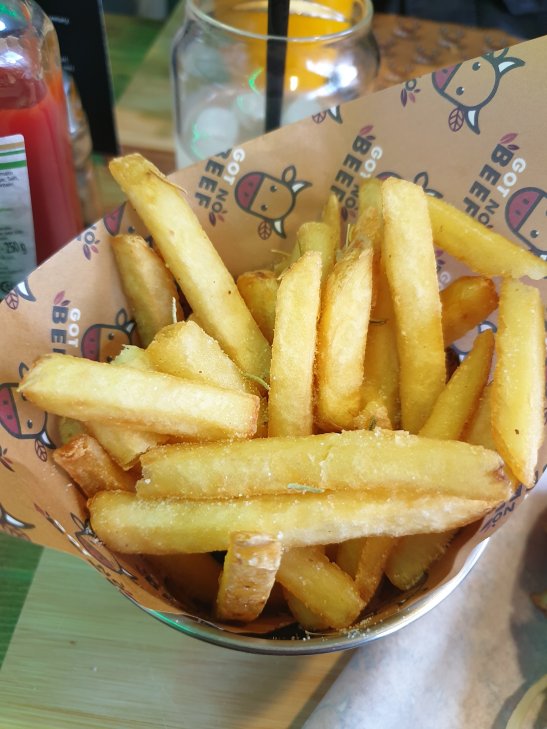 which again were very good and a decent portion size. Crisp on the outside and fluffy on the inside, they had a nice hit of rosemary to them. Only thing missing was salt, but there was a salt cellar on the table to allow for self administration so that was fine. 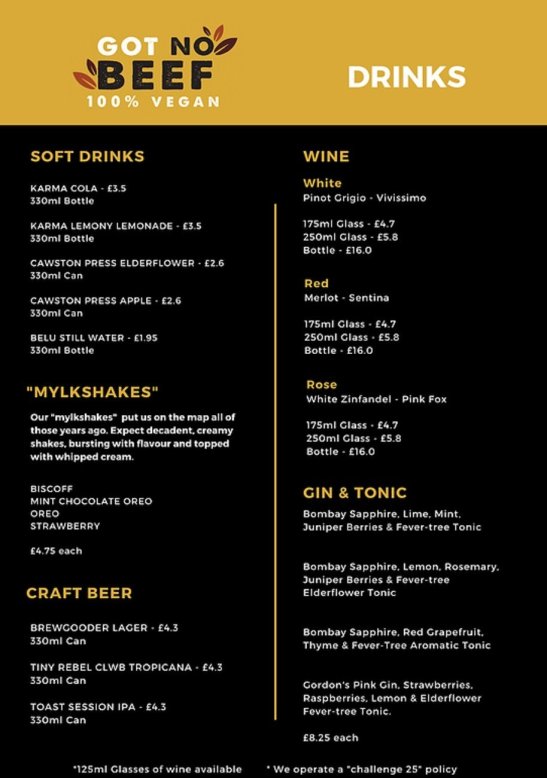 with a limited selection of beers, wines and gins – 3 beers (I think I would have gone for the Toast Session IPA if I had been drinking), 3 wines (none of which excited) and two gins (Bombay Sapphire and Gordon’s Pink).

There are, of course, cocktails (it seemingly being punishable by retail death not to serve them these days). 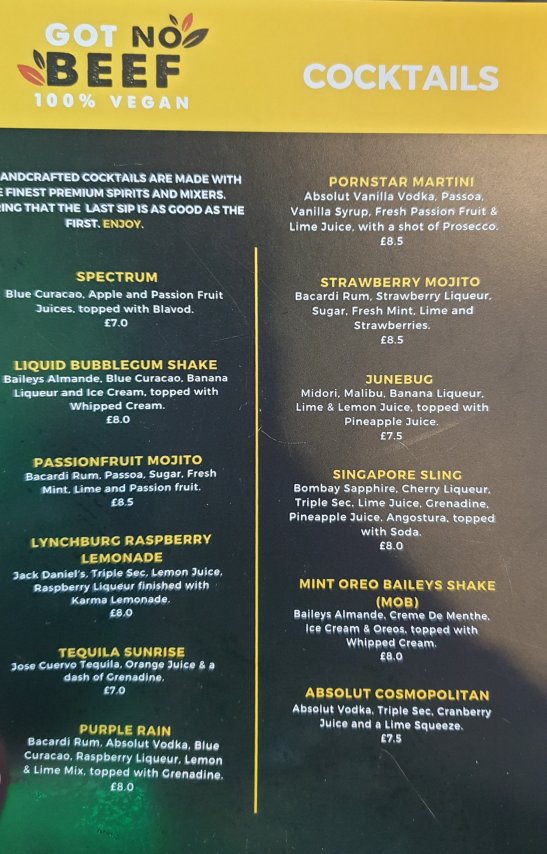 Only the Singapore Sling remotely appealed to me (the Liquid Bubblegum Shake positively repelled me), but I am not much of a cocktail drinker.

It was a work day lunch, in any event, and it was therefore soft drinks only. 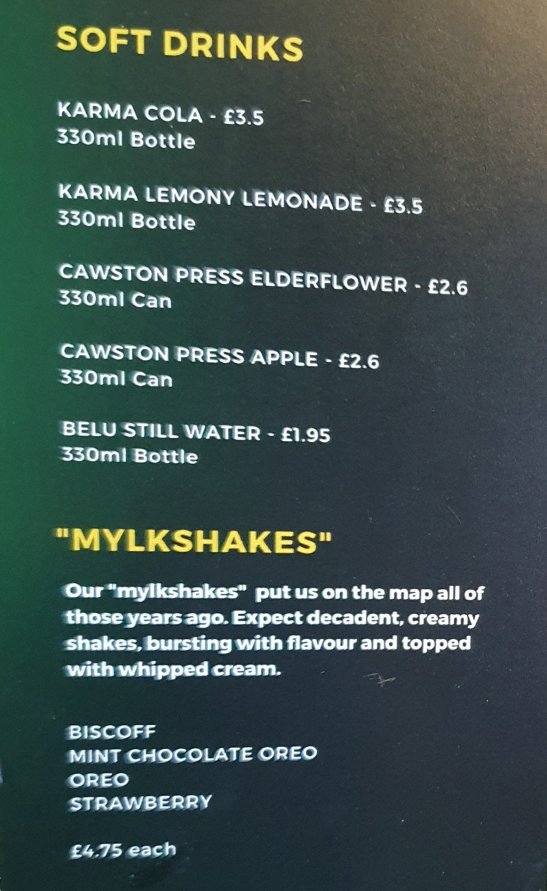 The “mylkshakes” are made from soya milk and sound interesting, but my mate and I went for a Karma cola and a Lemony lemonade. 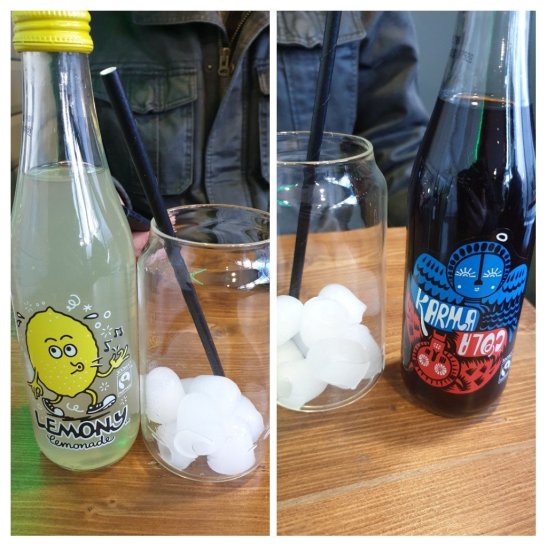 Much better than the usual soda suspects – I initially thought the price of £3.50 each was a bit steep, but they both seem to retail for £1.69 so it is mot excessive.

I was really surprised at the burger in “Got No beef”. I am quite sceptical about these faux meat products and as mentioned earlier have not previously found plant based patties much to my liking.

The burger here, however, ticked a lot of boxes and to me is the closest I have had to adequately replicating a meat based burger. Not sure I would have pegged it as being plant based if I had tasted it blind. For an avowed carnivore, like me, that is impressive.

Would I go back? Yes – it is a good burger and overall a very nice set up.

Whilst it certainly hasn’t converted me to going full on plant based, it is nice to have a decent veggie offering. This was easily the best veggie burger I have had and actually better than a fair few beef burger I have had.

Whilst not something that beats the Hoof burgers or even the meat based burgers from Honest, it was still pretty good.

It ain’t cheap (two burgers and soft drinks came to £28), but for the size and quality of what you get I think it was OK value. Certainly much more bang for your buck than the likes of Shake Shack and Five Guys.

On the value front, interestingly the plant based burger at Honest is £13.50 and seems akin to the Classic Burger offered up here – priced at £10.50. That is a big saving.

Regardless of whether or not you buy into Veganuary, this place is well worth a try in January and beyond.

Take away is also available, with a couple of decent looking lunchtime deals. 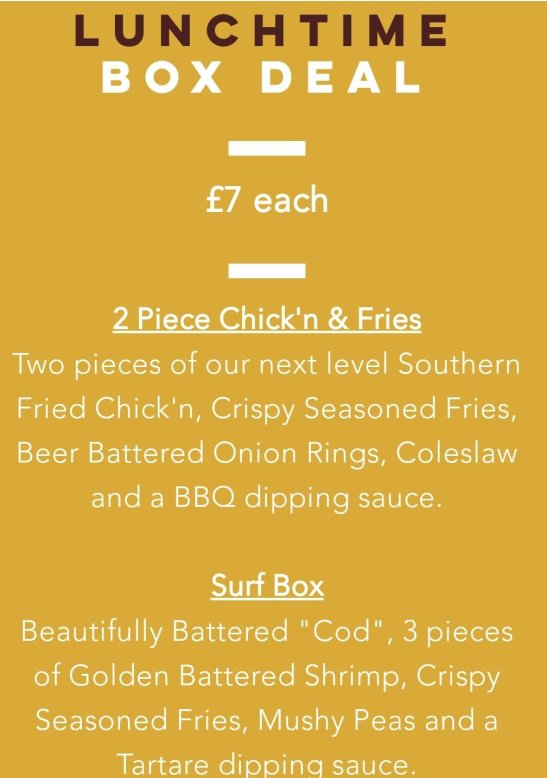