As posts on Chick’N’Sours and Coqfighter have shown, I am a big fan of fried chicken. As a result I have decried in recent months the seeming paucity of good fried chicken options in Cardiff (especially with the departure of Burger Theory and their Prairie Girl, although its replacement at Kongs – Nomad Kitchen – looks to have a promising Korean Fried chicken burger offering).

Bar from the Korean Fried Chicken at Kimchi, I can’t think of anywhere (Nomad Kitchen, fingers crossed – Gourmet Gorro says it is a belter, aside) where you can get a piece of decent fried chicken in Cardiff (sorry can’t stand KFC – coating is alright, but the chicken has a horrid wet, flabby, texture to it and I am not a fan of a cheeky Nandos either). A little outside of Cardiff there is, of course, Hangfire -but that requires a bit of planning.

The opening up of a Taiwanese chicken shop in Canton, therefore, more than piqued my interest. Working from home one Friday presented me with the opportunity to nip down to Canton to check it out.

Not much to tell really, it is in the old (and worse than even KFC) Miss Millies’ unit on Cowbridge Road East (Tesco end) and is very much set up for take aways. There is a counter and a few stools if you want to eat in, but it is pretty utilitarian. Fine for a quick bite before or after going out or as a lunch time snack, but that is it. Otherwise a case of getting the food and drink to takeaway.

It was pee’ing it down on the day of my visit so I decided to eat in rather than to brave the element to get to the car to take it home.

Whilst the menu focusses on fried chicken (with the place being called Ji, The Chicken Shop that is to be expected), there are some interesting other options such as crispy octopus, squid and king prawns. Veggies are also catered for in the form of crispy tofu (not my cup of tea, but there are plenty for whom it very much is). For those who like a bit of filth, there is the volcanic cheesy chicken.

Sides are also interesting sounding, with the lotus root chips and the plum chips intriguing me (more on the latter below) 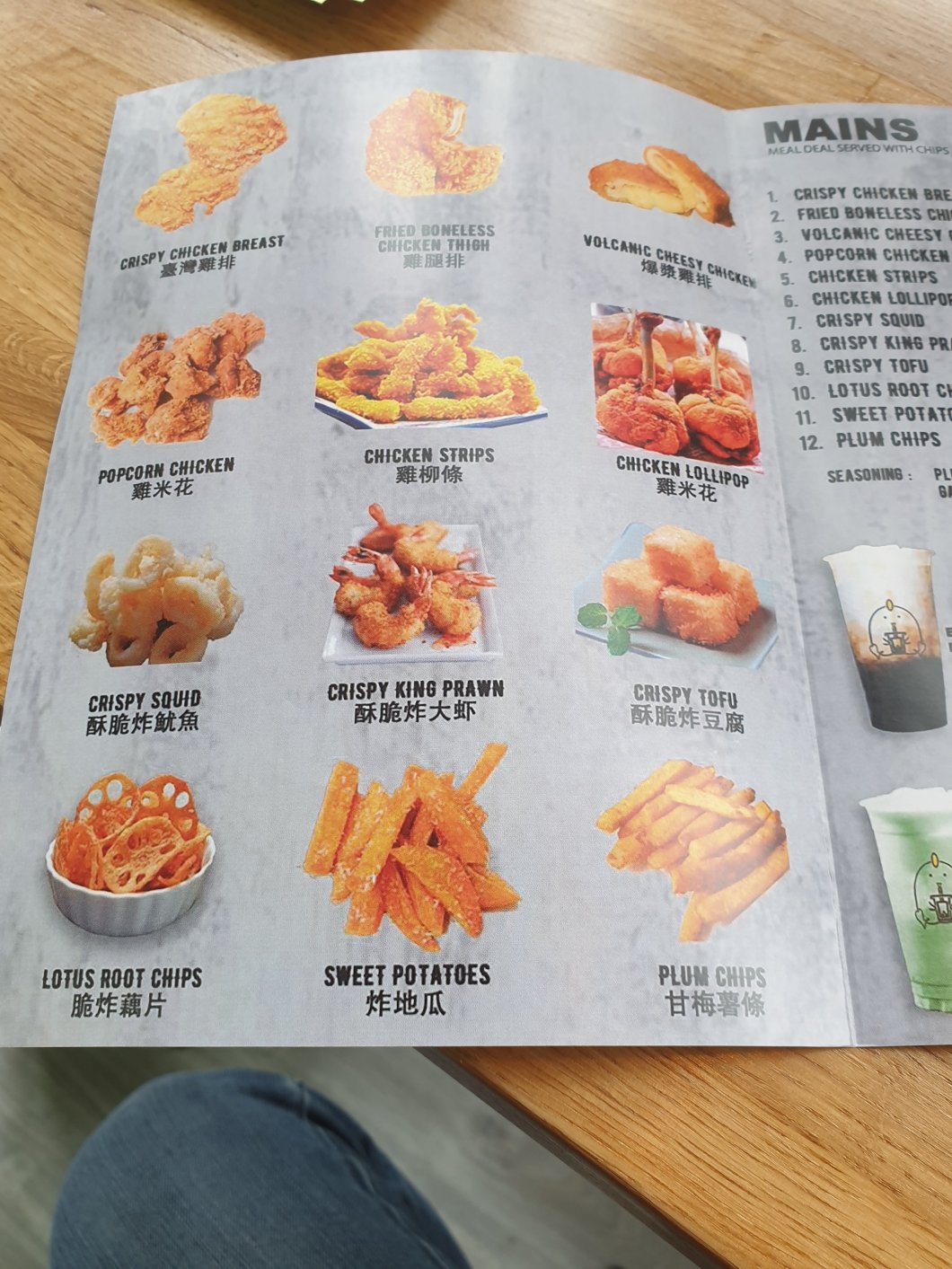 A feature of the place is the seasonings that you can apply to your fried stuff,

with a number of options all in powdered form. These include plum, cheese, lemon, seaweed, curry, cumin, paprika, salt & pepper, garlic and (the rather ominously) numbing chilli.

You can add one or more of these to your chicken/other fried stuff (usually a sucker for octopus 😁, but it with powdered cheese sounds a particularly odd/gruesome combo).

Whilst I tend to be a thigh rather than breast man when it comes to fried chicken (the thigh tends to be juicier and have more flavour), I had heard tell from a reliable source (Gourmet Gorro) that the speciality of the house was the chicken breast which is pounded flat (schnitzel like) before being breadcrumbed and fried.

I, therefore, went for the crispy chicken breast (£6 for two pieces or £8 as a meal deal with chips and a soda).

I added the curry seasoning to both flattened breasts (I could have mixed and matched with alternative seasoning for the other breast, but I had made my choice by the point I realised this and couldn’t be bothered to consider a second option).

The coating on the chicken has a nice crunch to it, was grease free and (even without the curry seasoning) had a good flavour to it – nicely seasoned. The liberal sprinkling of the curry powder added a decent kick (as well as just a touch of sweetness) which I rather liked.

Breast meat on chicken can be dry, especially when pounded flat, but here the meat was very juicy. I wonder if it is brined?

With the two slabs of chicken that comes with both the £6 price and the meal deal (they were big) there was more than enough for two people (I, as a total pig, actually struggled to eat all of my meal deal)

The meal deal comes with plum fries, which is something that I suspect will bring out the Peter Kay in many people – a case of “What, plum with chips!!!”. A sentiment I actually have some sympathy with in this instance, as plum is not something I have ever thought of as being an accompaniment to chips (a fruity sauce – i.e HP – does work mind). I get sweet and sour or sweet and heat, but just sweet with savoury is not my thing.

The plum comes as a seasoning powder (it is an option with the chicken if you are so inclined – I would not be if I were you if am honest) liberally sprinkled over the fries. 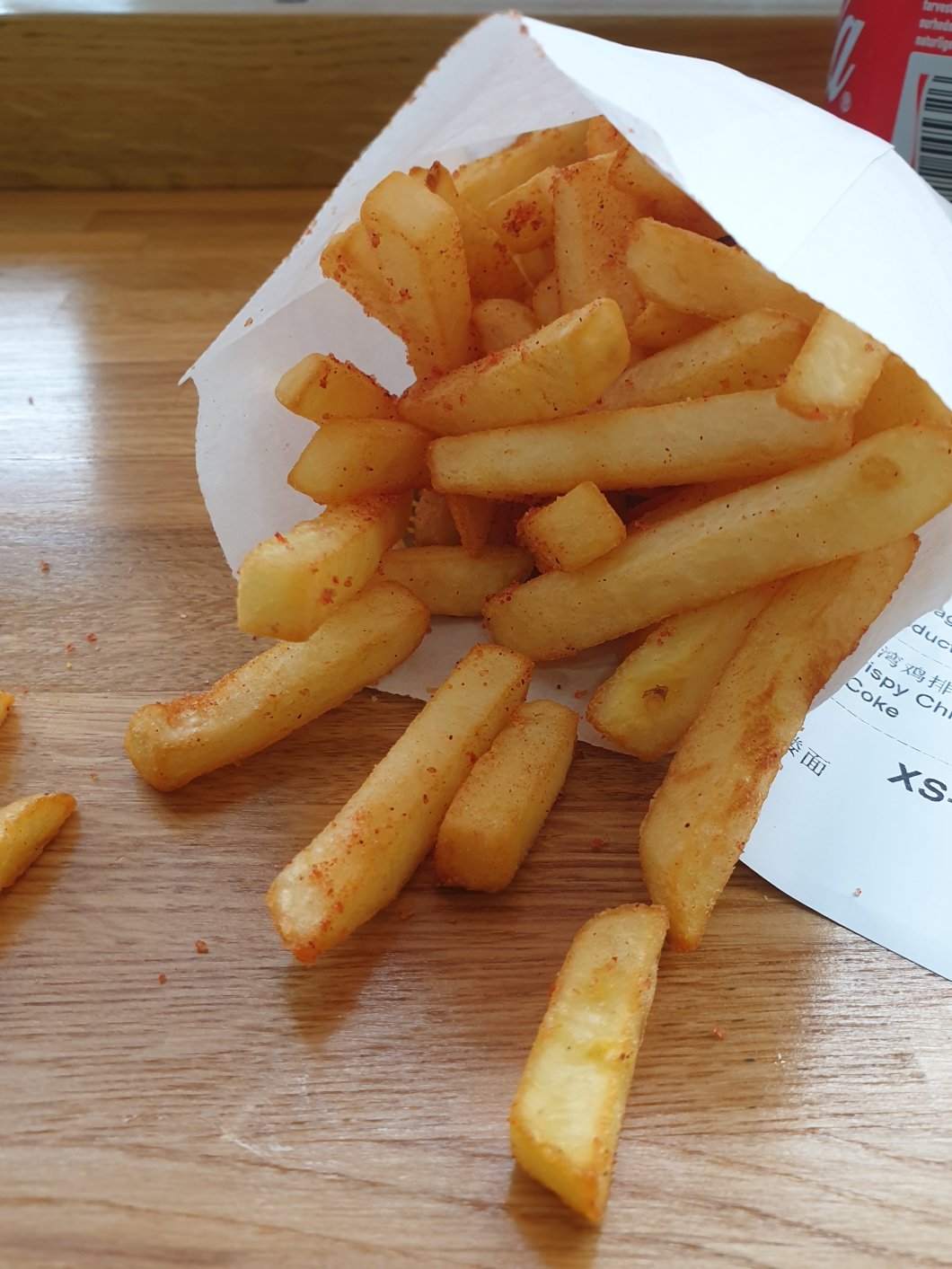 Decent portion of chips, but I can’t say I was particularly sold on the plum bit. It added a peculiar sweetness (with no balancing sour or heat) to the fries, which to my mind (I don’t have much of a sweet tooth) had no reason to be there (unlike with the curry powder on the chicken).

I am sure plum powder on chips is a big Taiwanese thing, but it doesn’t work for me I am afraid. More a salt and vinegar with my fries sort of person (I think the curry powder I had on my chicken would have worked on the fries though). Maybe the plum powder would works better on the sweet potato fries, but I doubt it.

The fries themselves were piping hot and plentiful, but could have been a tad crispier.

So pretty good chicken, but not a fan of the plum fries.

On the drinks front there seems to be a myriad of whacky teas on offer,

as well as some interesting sounding milk options. I have never come across taro milk before and the brown sugar milk made my teeth ache just reading it on the menu. All points to the Taiwanese having a very sweet tooth.

On my first visit, I had the meal deal This comes with a standard soda offering as the drink. I had a coke – it was wet, super sweet, brown and fizzy. That all I can really say about it. Would have been nice if one of the teas was an option with the meal deal.

I really enjoyed the fried chichen at this place. Good coating, with the ability to pimp it up with a myriad of standard and increasingly whacky seasonings, and decent chicken inside. Can imagine the chicken here becoming quite addictive. The plum fries were not my cup of tea (taro milk tea or otherwise) am afraid.

Would I go back? Yes, pretty good fried chicken can be had here and I would certainly (to my surprise) have the breast meat option again. Do think I will probably try the thigh meat one next time though (more flavour I would wager) or even the squid or octopus. I will pass on the plum fries though – maybe go the lotus root ones next time.