Following on from my recent post on a very decent bit of fried chicken in London at Coqfighter, this place (recommended by Gourmet Gorro – can’t go wrong usually with his recommends) formed another part of my “frying” visit to London recently.

Less of a hipster haven than Coqfighter, it had a rather charming speakeasy feel to it, with its tiny basement location.

Madly busy, but a very efficient operation meant I benefited from being a solo dinner (“Can you squeeze a small one in at the bar? Why, yes we can.” and people behind me ” Can you do a table for 4? ” Sorry, going to be at least a 40 min wait, we can put you on the list” – how I inwardly laughed).

The menu here is a bit more expansive than Coqfighter’s, but looked equally nice.

The pickled watermelon on the menu, particularly, interested me and it has pretty much an all meat menu with (unlike Coqfighter) no concessions to veggies, bar from in the sides or extras.

I know some may rile against the lack of a non meat main option, but I think it is quite refreshing that they offer no faux meat options with it being in effect “it’s chicken or there’s the door”.

In my view, a chicken shop should no more be criticised for selling only chicken mains than a veggie/vegan place that doesn’t offer a meat main option (that will be all of them as far as I can tell – which I have no issue with as I know what to expect if I go to a veggie/vegan restaurant).

Anyhow, I digress, so back to the chicken. Rather than a burger (they, looking at what was being delivered to other tables, were huge), I opted for the House Fry (£9) comprising of a drumstick, a thigh and the aforementioned pickled watermelon

The chicken was simply epic,

with an amazingly crunchy and a nicely spiced (oodles for black pepper in the mix) coating. It provided a phenomenally good crunch as I clamped my jaw around it. So satisfying and oh so tasty.

According to the blurb, the impossibly crunchy coating is achieved via pressure cooker deep frying (which sounds like a lethal “accident waiting to happen” combo).

The chicken itself was top notch, with a juicy, well flavoured, interior enhanced by it having been subjected to brining and a good immersion in buttermilk. Stunningly moreish stuff this fried chicken.

I gnawed the chicken to the bone and then some, 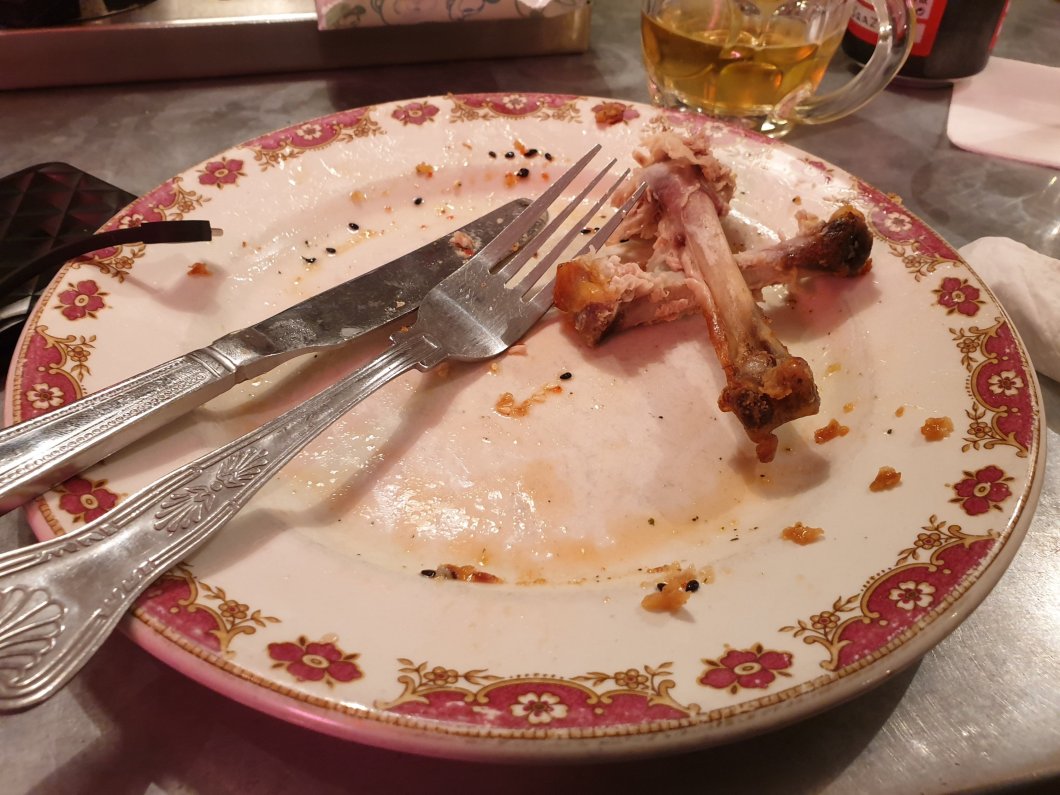 with liberal use made of the supplied (and absurdly necessary) wet wipes.

The pickled watermelon worked a treat in cutting through the richness of the fried chicken. 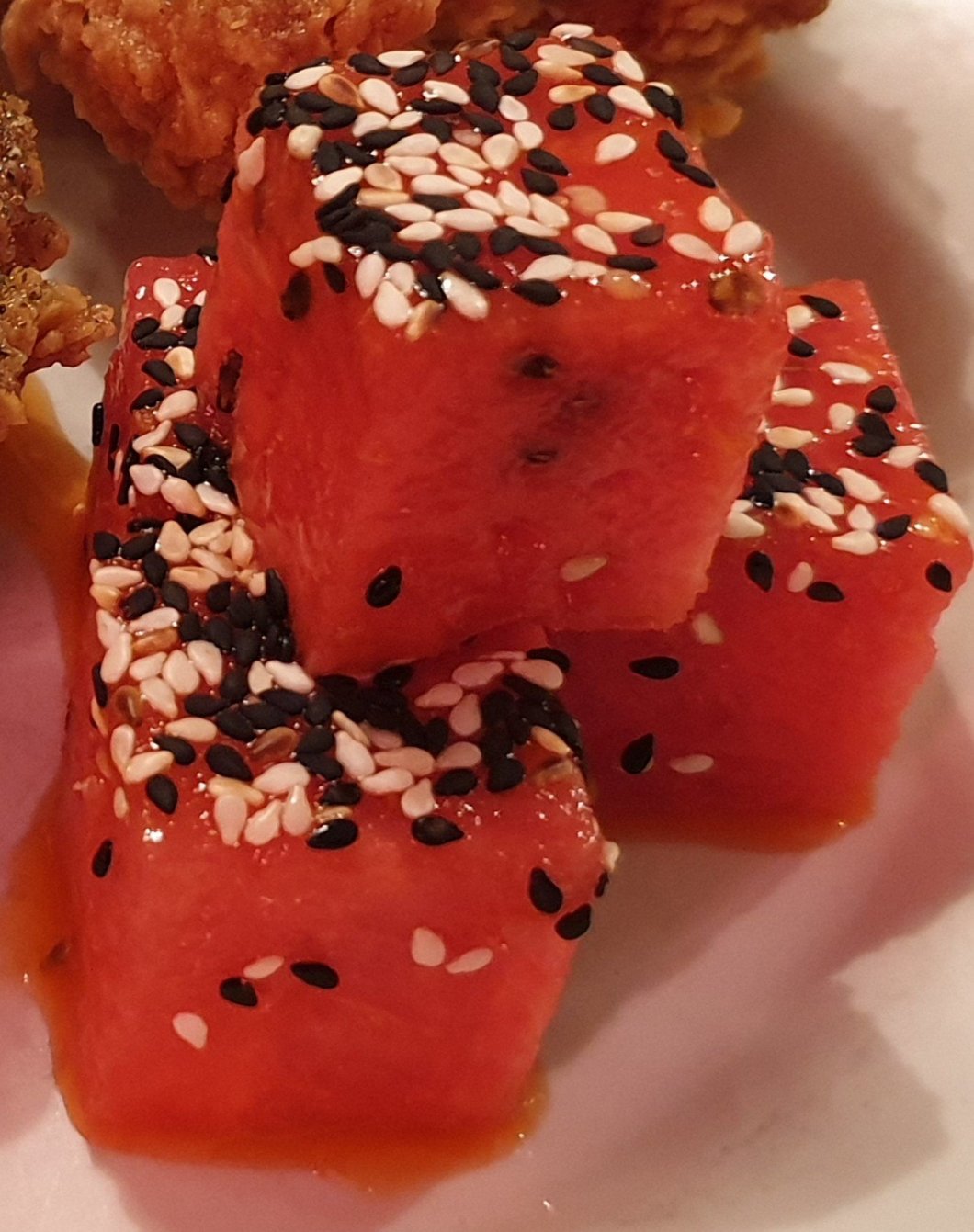 Can’t say I am usually a huge fan of watermelon (find it a bit boring and usually avoid it unless it is a baking hot day, I need a thirst quencher and have 20 odd other people to share it with), but the pickling of it is an act of genius. Really brings out the hitherto muted flavours.

In particular, the “Special Set Menu” on the lunch menu looks a serious steal for £16PP (sadly it requires a minimum of two diners, so was off limits at £32 for a solo me – was ever so slightly tempted mind).

in the form of a whole fried chicken 🤤🤤🤤.

I washed my House Fry down with a Studio Pilsner (£4.50 for a can), which was a nice refreshing beer and went well with the chicken. 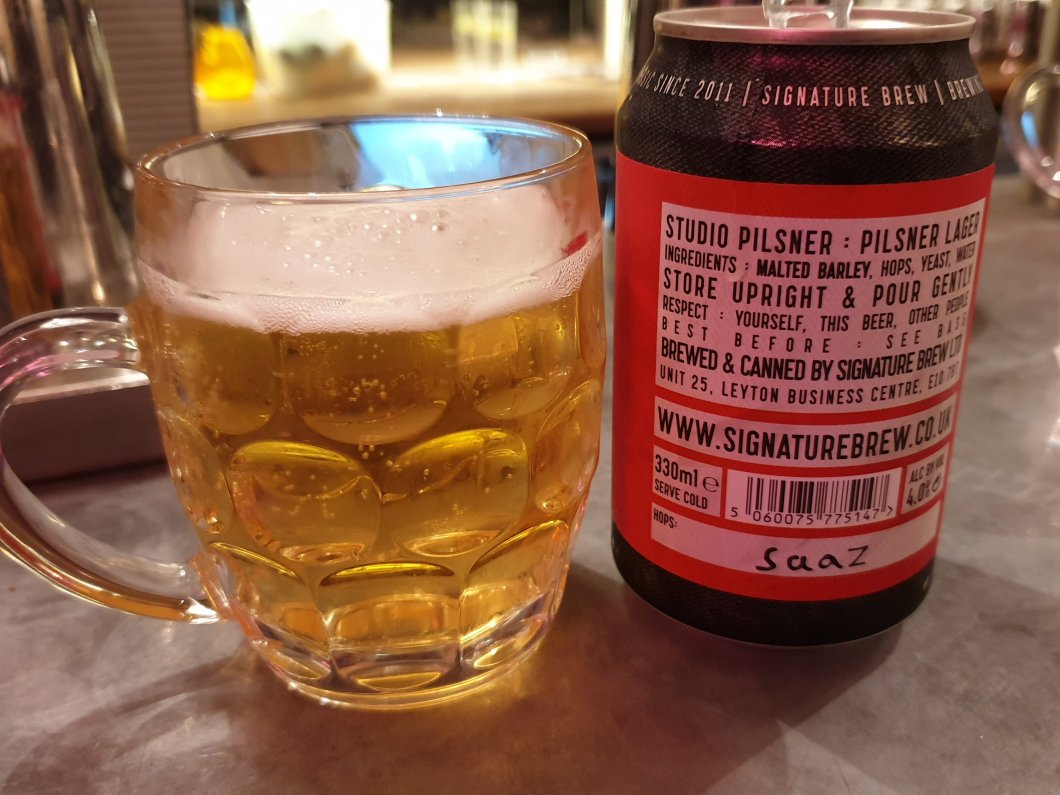 It came with a delightfully retro dimpled half pint jug (the sight of which took me back to the days of me being an spectacularly incompetent barman who habitually under/over charged customers and leant on the Guinness tap to “inadvertently” top up my glass, whilst “working” behind the bar at my Uncle and Aunt’s pub in Kent) and they serve their fizz in coupés.

Yes, I know the latter aren’t a purest’s idea of what you should drink fizz from, but I just think they look great (“Gatsby” 😁). I have been told that brandishing one makes me look a bit like Leonardo DiCaprio (although it seems only if Leo has seriously gone to seed and become a touch overweight and very bald, with a seriously unruly beard – oh and lost all his money and boyish charm and become a tight arsed miserably git).

Other drinks options are the “sour” cocktails, that form the latter part of the place’s name. I am not huge cocktail drinker, but am quite partial to anything sour (usually matches my mood). 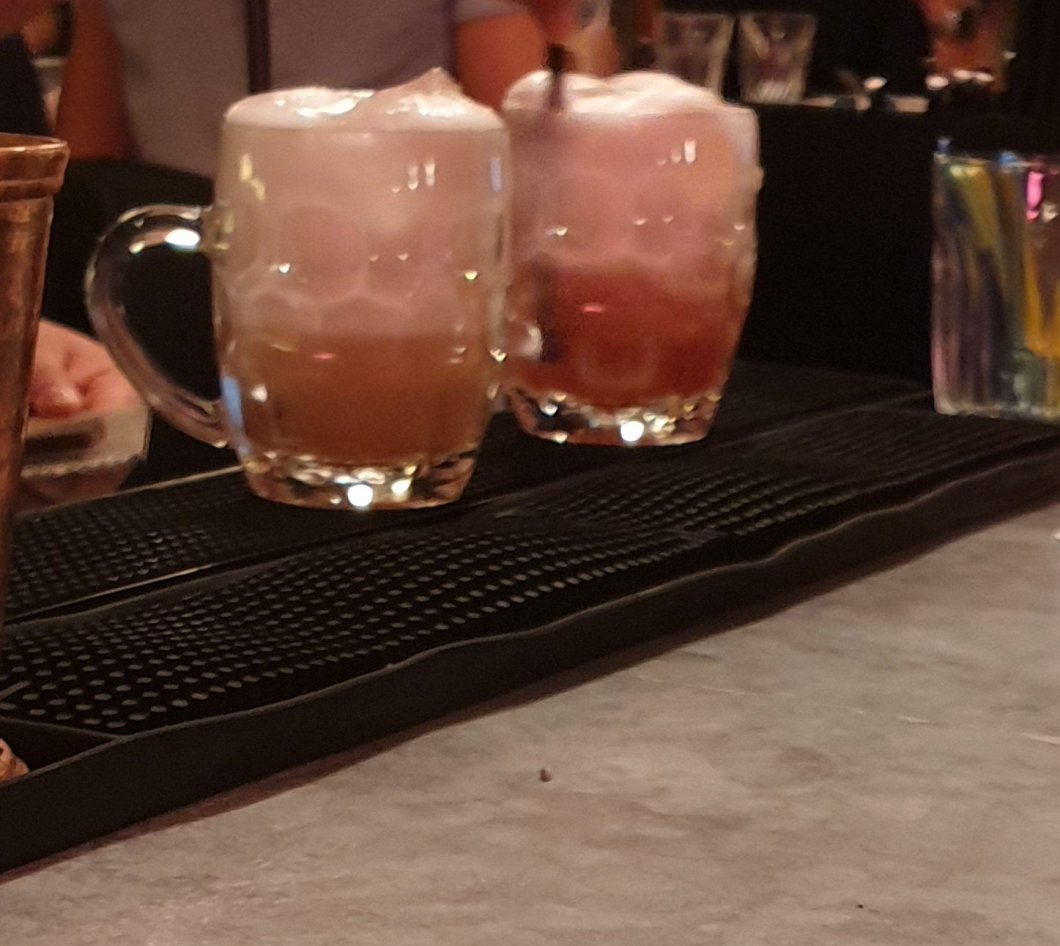 being rather dayglo and very frothy.

If I was drinking wine with fried chicken, I would probably go for a German riesling (a Dr Loosen wine would work nicely with the copious amounts of pepper in coating here I think ) or fizz (a crémant perhaps – Aldi’s crémant de Jura is very good value for money).

Fantastic fried chicken this, with an amazing coating born of the pressure cooker method of deep frying it.

Best fried chicken (in my limited experiance it has to be said) I have come across to date in my long (albeit pretty uneventful) existence.

Would I go back? Definately – top notch fried chicken.

I preferred it to Coqfighter based on the superior coating on the chicken and not being referred to as “babes” on the bill. It’s the little things 🙄.

I paid just over £15 (including the obligatory automatic service change), which I thought was very fair value.

Whilst the menu said “Cards only, no cash”, I paid cash (because either I am a contrary git or I didn’t read the menu properly – you decide). They didn’t seem to mind.

If you want something a bit cheaper, the people behind Chick’n’Sour have a paired back operation called Chik’N on the corner of Noel Street and Waldour Street. 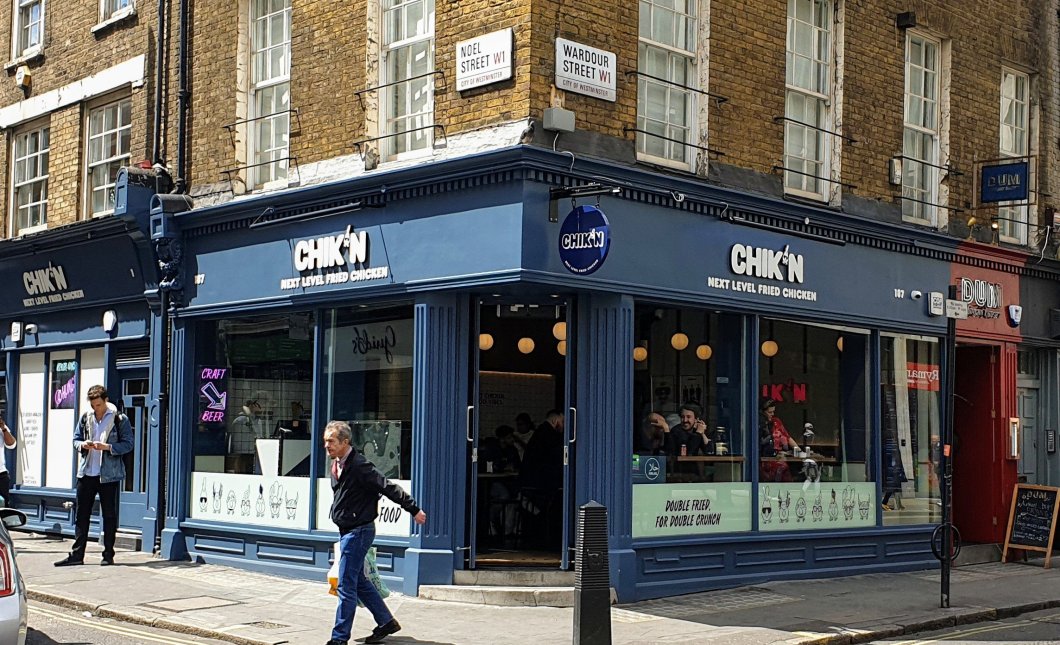 Not tried it, but was popular when I walked passed it and it appears to be a little easier on the wallet.

I do wish a really decent fried chicken shop (Slim Chicken most certainly doesn’t fall into that category to my mind) would open up in Cardiff (or if there is one I am unaware of could someone tell me about it). On the fried chicken front in Carsiff, I can only think of the Korean fried chicken at Kimchi, the Prairie Girl at Kongs and the KFC from Keralan Karavan, but none of these are dedicated chicken shops.

Gap in the market for someone to fill, perhaps, with pressure cooker deep fried chicken?

Nearest tube station: Leicester Square and Covent Garden are both about a 3 minute walk away.

Other branches in Haggerston and Islington.