So adieu to “token girl” – lunch at the Corner House, Cardiff

A leaving lunch for “token girl” (one of two – leaving lunches that is), who was so named in a prevously blog post about a night out in Rome, was an opportunity for me to take a look at the fixed price lunch menu at the Corner House in Cardiff City Centre.

I was rather sad that “token girl” decided to leave the firm not least as she has been the butt of many a gentle jibe from me over the years, being charmingly naive in some ways for such an intelligent person.

This was exploited to the full by the unprincipled cad that I am (well I am a lawyer after all) and the result was hours of fun as she innocently supplied the necessary words to tee up many a punch line.

It is always sad to see a long standing work colleague and friend leave and, notwithstanding my mild teasing (or maybe because of it), I shall miss her.

As is corporate tradition the “escapee” is taken to lunch and the Corner House was chosen, not least due to its proximity to the office and the presence of a fixed price menu!!!

The interior is rather nice. Quite plush for a pub and perhaps reflective of the fact that the focus here is as much on food as on booze. Not sure who thought keeping bottles of wine out in the open under lights was a good idea mind. Style over substance if ever I saw it. 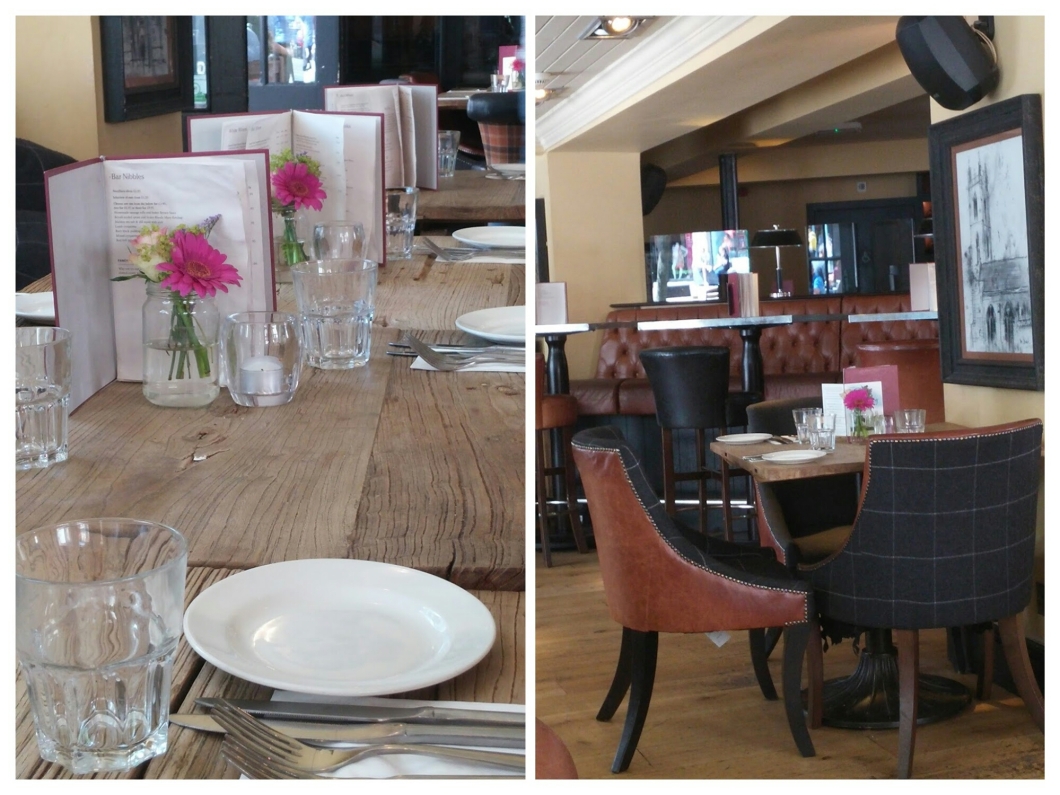 Whilst I loath the terms gastro pub, I suspect the decor here is pretty much in line with a designer’s template headed “Gastro Pub”

The fact that the toilets are up about a hundred flights of stair is a bit of a design flaw as it takes an age to get up and back from them. I do wonder how many people of a late Friday or Saturday night have fallen down them.

With me, at the time, still recovering from a broken foot these toilets may as well have been in Kathmandu for all the chances of me getting to them.

The menu is comprehensive, covering a piece of A3. 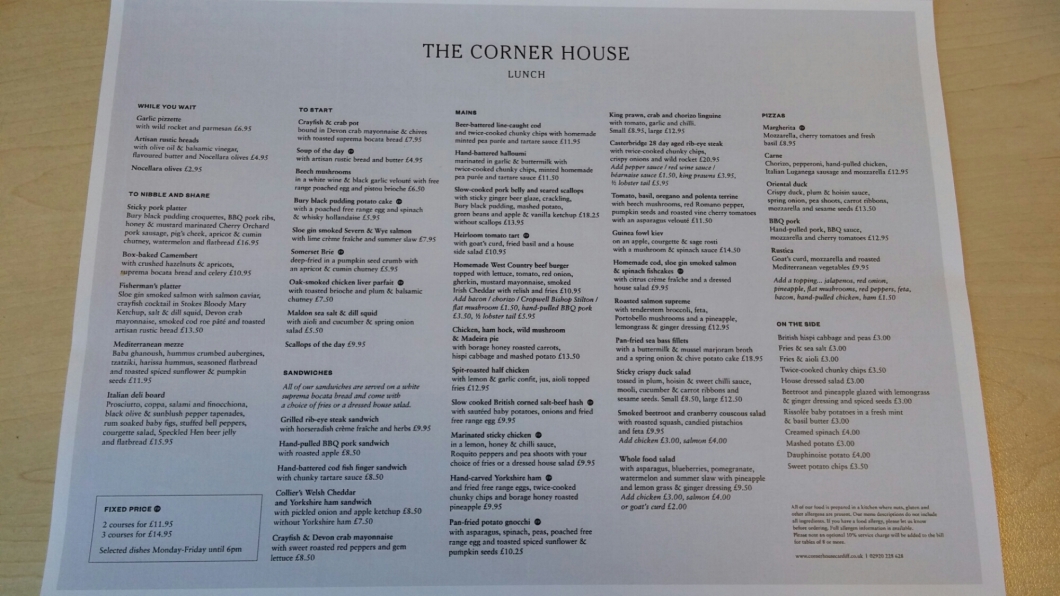 It ranges from your pub staples, such as soup, sarnies, chicken liver parfait (fancy name for what was pâté in reality), fish and chips and ham, egg and chips (albeit most with a supposed twist) to the more sophisticated, in the form of things like Maldon sea salt and dill squid and guinia fowl kiev. I get the impression from it that they are trying just a little too hard to impress.

For lunch there is a set price of £11.95 for two course and £14.95 for three. This is only available from a limited choice of dishes on the menu (four starters and seven main).

For starter, I went for the Bury black pudding potato cake (normally £5.95), which came with a poached egg, spinach and a whisky hollandaise. Basic things here like a poached egg and hollandaise that no professional kitchen should get wrong (but which many sadly do). So a dish to test if the kitchen is up to scratch.

This came on a dreaded slate, with the sin compounded by the hollandaise (no discernable presence of whisky in it) being squirted “arty farty” style all over it. What’s wrong with it being poured over the egg and putting the whole thing on a proper plate?

The egg was barely runny, which took away much of the joy of ordering a poached egg, but this was perhaps for the best. Runny egg over a slate = not great.

The potato cake itself was ok but was lacking in very much of the advertised Bury black pudding and needed a good pinch of salt and some pepper (annoyingly none on the table). The spinach was also a bit watery, having not been drained properly by the look of it. As a result it was all a bit bland.

Others who had the chicken liver parfait (normally a pricey £7.50)

and deep fried brie (£5.95) were happy with their choices, 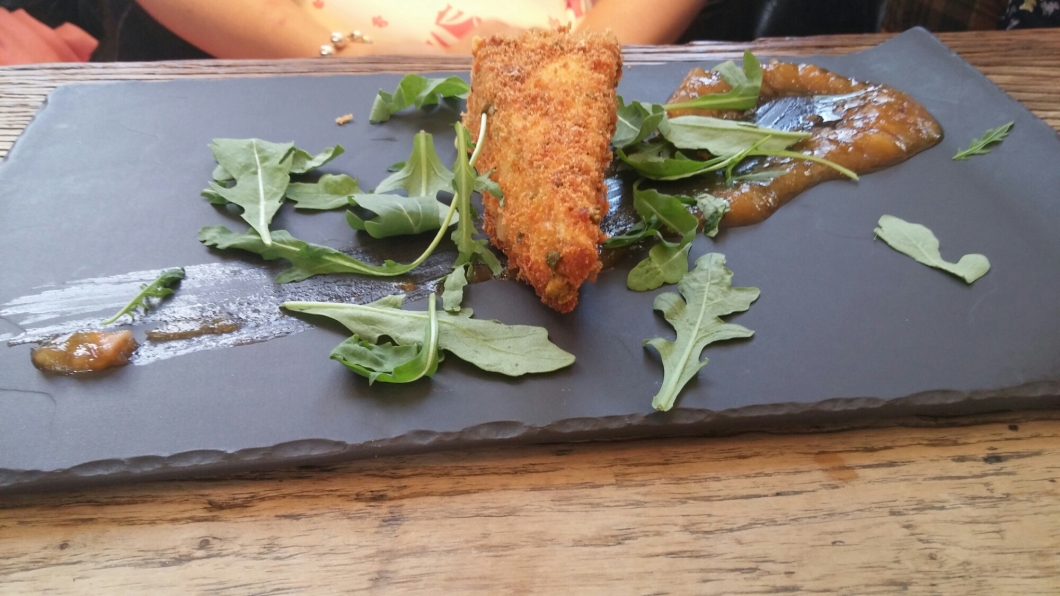 although the parfait didn’t have enough bread (why do places always skimp on the bread) and way too much chutney.

For my main, I went for ham, egg and chips (£9.95, with the chips advertised on the menu as twice cooked chunky chips) which had with it (at first sight) the slightly unwelcome addition of a “borage honey roasted” chunk of pineapple. I like pineapple, but usually only on a stand alone basis and view its addition to savoury dishes (especially the ghastly ham and pineapple pizza) as rarely, if ever, a good thing. 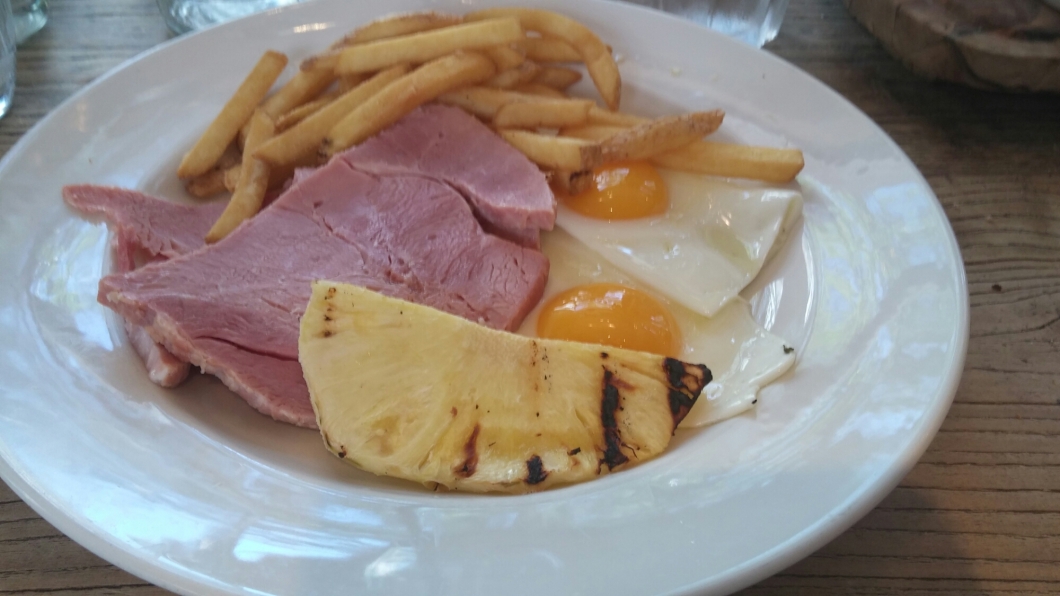 The ham was very nice, cut thick with a good flavour and it came with two nicely runny fried eggs. The chips were, however, not as advertised being neither chunky (or if they were I would hate to see the size of their skiny fries – they would presumably make a normal skinny fry look clinically obese) nor twice cooked (and a bit mean portion wise I thought). Why the pineapple was there was beyond me.

Several others had the marinated sticky chicken (normally £9.95), which displayed an alarming level of inconsistency in terms of the dishes put out by the kitchen and delivered to our table.

One had no discernable sauce (should have come with a lemon, honey & chilli sauce ) and my friend Rachel commented that her child had stickier fingers than the “sticky chicken”. It all looked rather anemic to me.

Another, on the other hand, had plenty of sauce and a more appetizing chargrilled look to it. 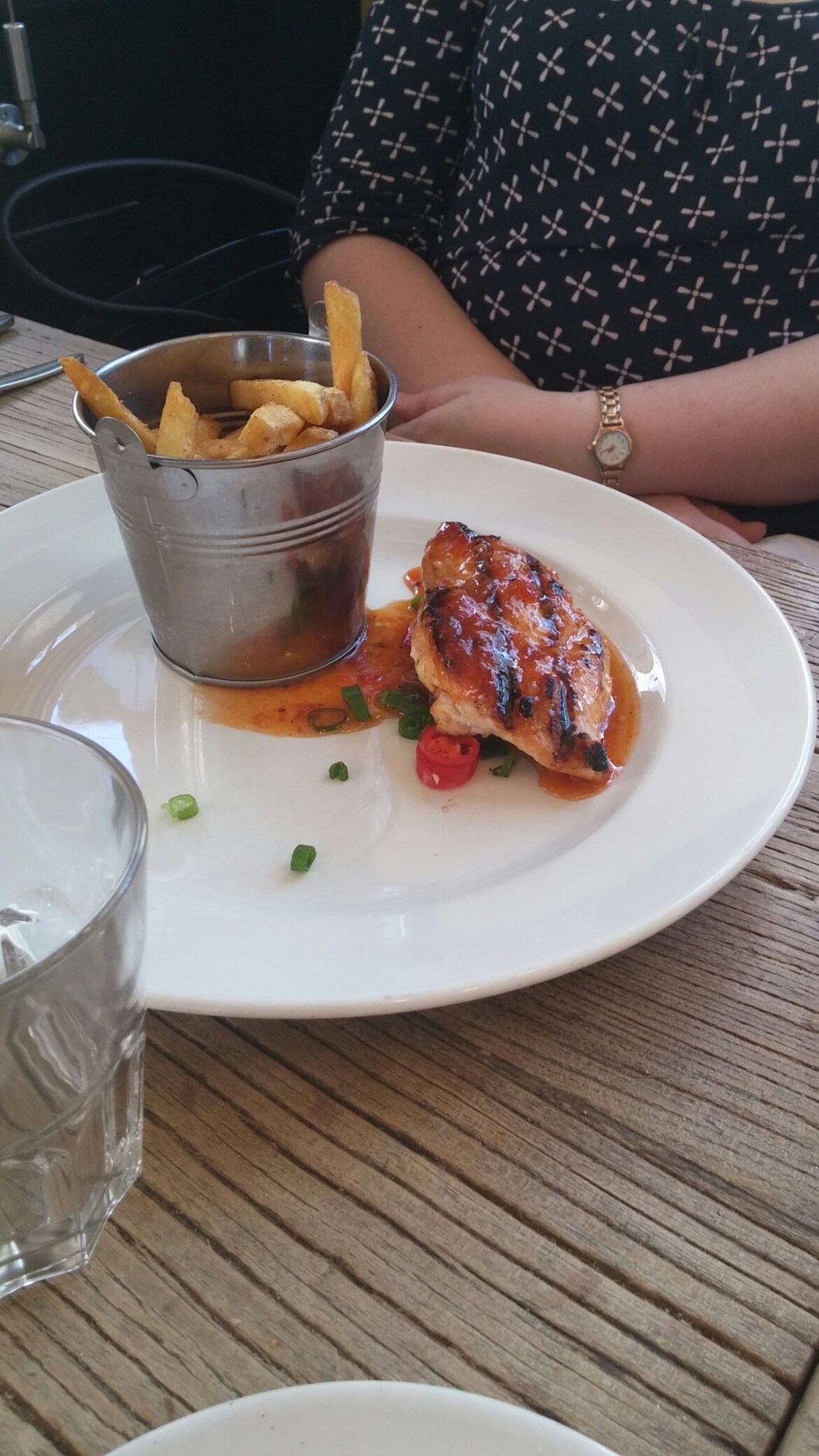 Eye off the ball in the kitchen to let two of the same dish go out looking so different.

Without the sauce I was told it was pretty bland (bit of a theme developing here). I had no desire to try it to check.

Another in our party had the crispy duck salad (£12.50 and not part of the fixed price lunch offer) and complained it was much smaller than usual. This was meet with a shrug by the staff member it was raised with.

Service was erratic to say the least. One starter was seemingly forgotten and arrived after all others had been finished. My main course and one other were delivered a good 15 minutes after everyone else got their mains. My chips (not the advertised ones) were luke warm which suggested my dish had been forgotten and the wrong chips thrown on the plate on a “god get anything out to them” basis. There was no salt or pepper or other condiments on the table and no offer of mustard for my ham.

As it was a working day lunch it was a no booze event, but they have a reasonable wine list which provides for a fair few by the glass

On the soft drinks front it is nice to see they have a bit more than your bog standard selection on offer.

I had an elderflower fizz (£2.50) which was very refreshing and something a bit different soft drink wise.

There is also a reasonable selection of beers and ciders 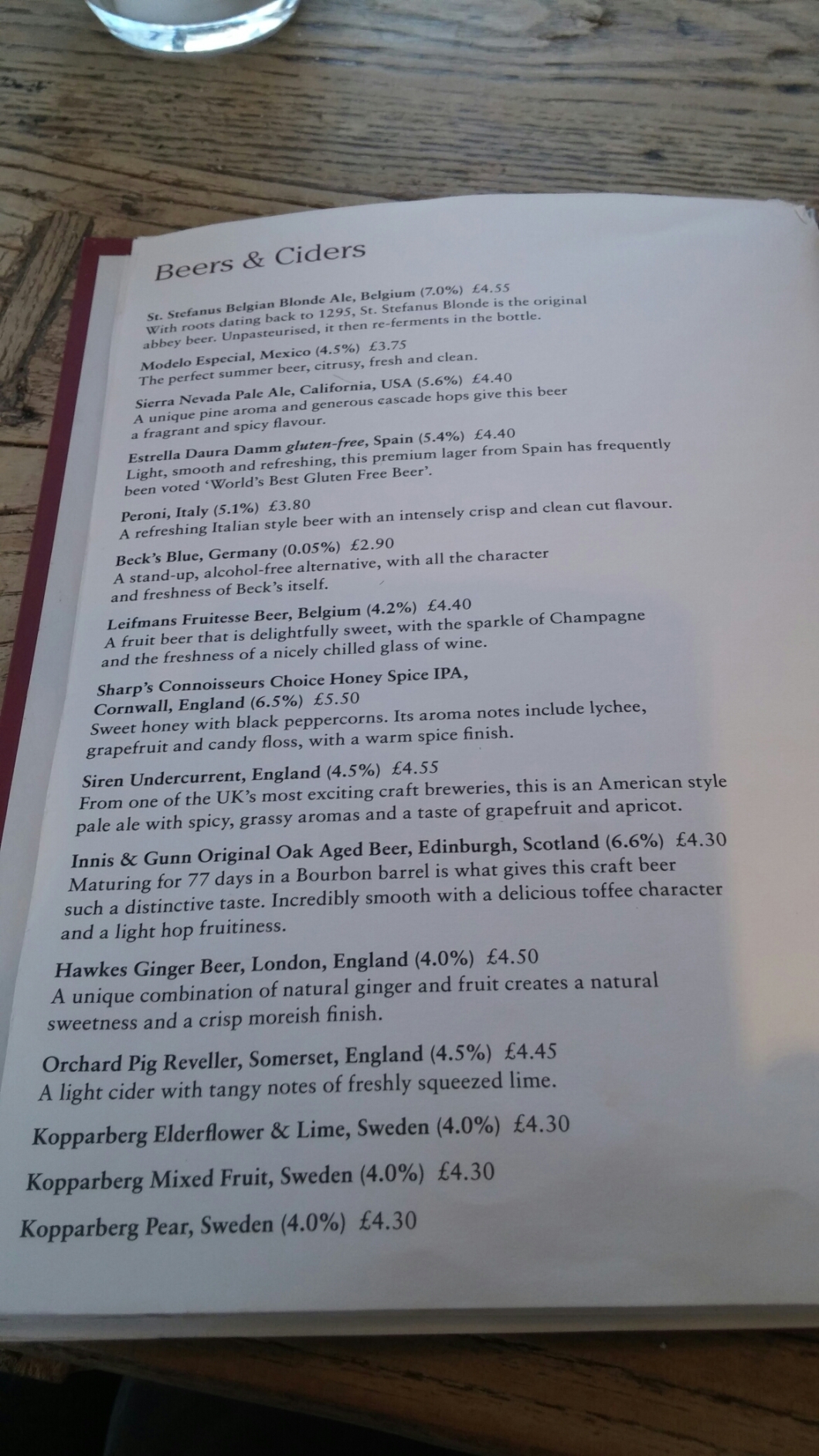 All in all, a bit disappointing and not the adieu for token girl hoped for (luckily we also went for lunch the next day at Burger & Lobster which was much better).

They didn’t seem to cope very well with our largish party, even though we emailed our order through in advance, with service more than a bit erratic. The food itself was very patchy, with some decent elements but way too many indifferent bits.

People in our party who had been to the place before commented that it is usually much better so this suggests that we caught the kitchen on a bad day. I do hope this was an aberration rather than the norm.

which was far from cheap for the quality of what we got. Luckily I wasn’t paying this time, as it was on the firm.

Would I go back? No, I don’t think so for lunch. There are many much better fixed price options available elsewhere in Cardiff (Potted Pig, Côte, Casanova and more recently the £12 lunchtime offer at Burger & Lobster and the lunch offer at Bar 44 ). My view is the Corner House needs to up its game considerably to compete with other fixed price lunch time offers available in Cardiff.

Still it is nice spot for an after work drink, with maybe some nibbles to soak up the booze.