When in Rome – a night out in the Eternal City. 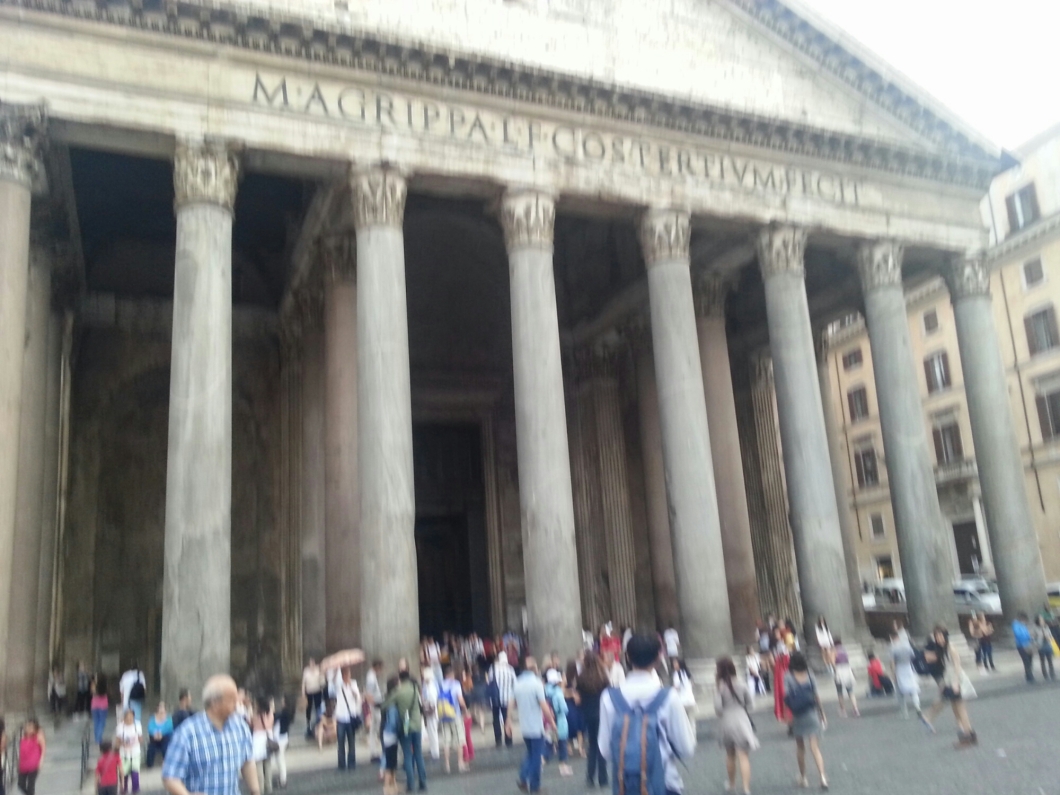 This week I had to attend a work event in Rome. Boohoo you poor lamb I hear you all cry. Well it certainly wasn’t all fun with a number of workshops that required the dreaded active participation of attendees. A necessary evil I suppose, but not one that many sane people actively look forward to or enjoy. I for one do not, but it had to be done and having it in (well near) the Eternal City was a bonus. This was especially the case as, due to the lack of any flights from Cardiff and the timing of flight from Bristol being a bit off, a number of colleagues from my work’s Cardiff office and I had to go the night before (yes it is a hard life but someone has to do it).

Now with this extra night, during the World Cup most red blooded males thoughts would turn to which bar to watch the football in. Personally I couldn’t care less about the World Cup. Being a fairly indifferent Brighton and Hove Albion fan I find the self proclaimed “beautiful” game for the most part stupefyingly dull with grown men seemingly going down as if felled by an axe at the merest feather of a touch (and being paid for this sums that would make a banker blush). Give me rugby union any day of the week (I support Bristol for my many and varied sins). As a result, naturally when in Rome my thoughts turned to food and wine and where to get some rather than to the wendyball World Cup.

Keen to avoid expensive tourist traps (that are regrettably all too prevalent in Rome), the help of colleagues in our Rome office was enlisted with a request for a goodish, not to pricey, not to touristy restaurant in or close to the centre which was open on a Monday night. A tall order, but they came up with a place called Maccheroni near the Pantheon on Piazza Avenue delle Coppelle.

Roman cuisine includes a few (shall we say ) interesting dishes, including Trippa del Romana (yep – tripe to you and me, which is not something I am keen on) and others from the so called fifth quarter (i.e. the dangly bits et al). I have been to Rome a couple of times before including a trip where I proposed to Mrs. SF (and much to my amazement she said yes) and have had a few good meals and my fair share of mediocre ones so I decided to play safe this time in terms of my menu choices.

We got into Rome from the hotel (following a hair raising cab ride during which my life flashed before me several times and the colleague in the front seat was in danger to seeing my lunch again) a little early and sojourned to a rather nice little wine bar, called Vinoteca 9, on the same street as the restaurant. Here I tried a couple of local wines from the Lazio region which surrounds Rome, the first being a pleasantly quaffable syrah and the second a nice enough, if a bit chewy, cabernet franc. One colleague had Aperol (a typical Roman aperitif) whilst the rest (bearing in mind it was a wine bar) had beer (not even Italian) or G&TS, much to my disgust and general name calling (that Roman word plebs may have been used as was peasants).

Each round came with a rather welcome platter of nibbles. The salami (with a good kick of fennel in it) was particularly nice and great with my wine. 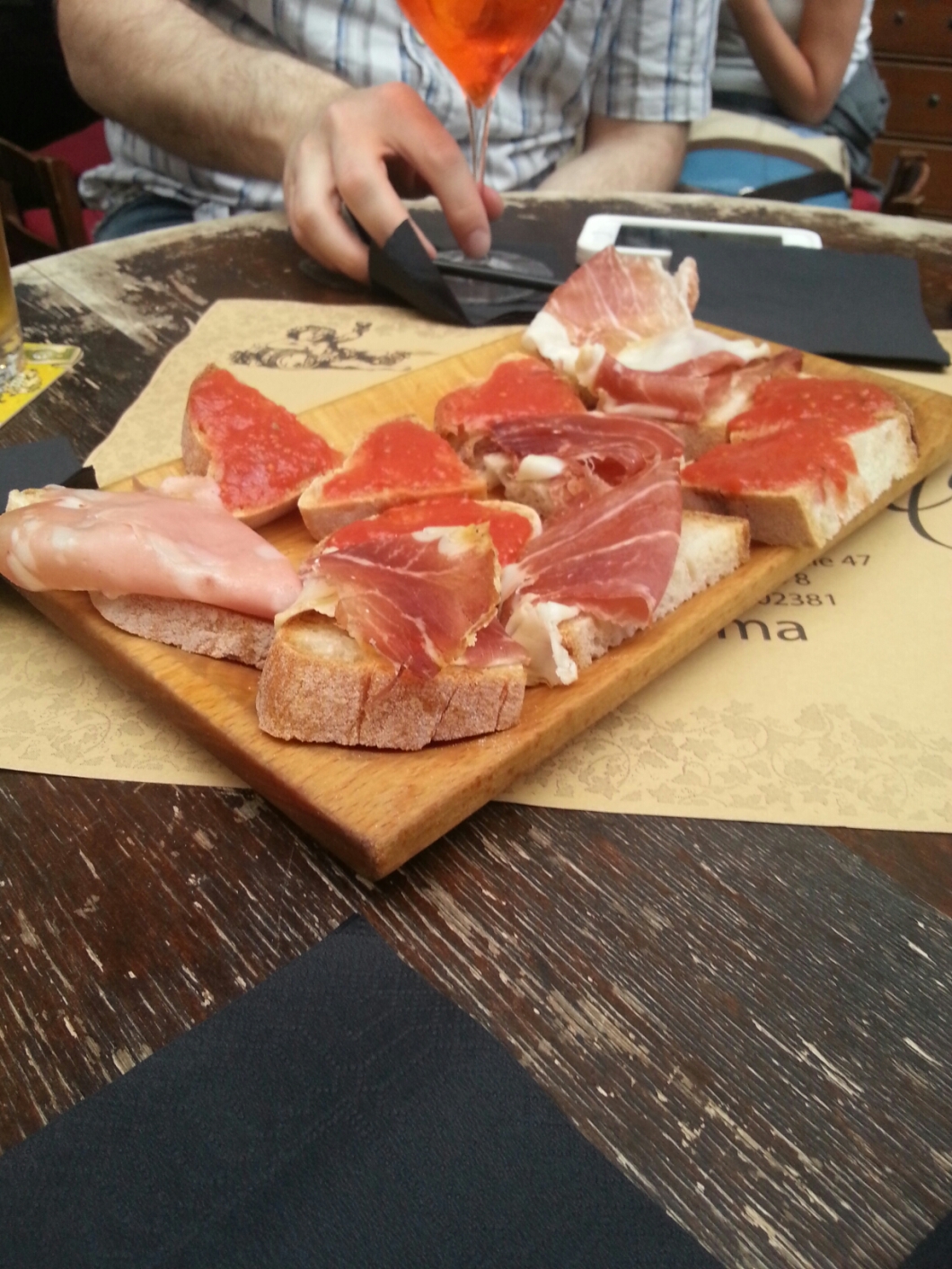 I was actually quite loathed to move from this bar when the time came for our booking.

Maccheroni is a nice looking restaurant on the corner of the street with tables outside for al fresco dining and an open kitchen inside. We were originally placed outside but a rapidly approaching thunderstorm resulted in a hasty decamp inside.

On the food front, we were given a English menu which has starters, pasta course and mains on it. 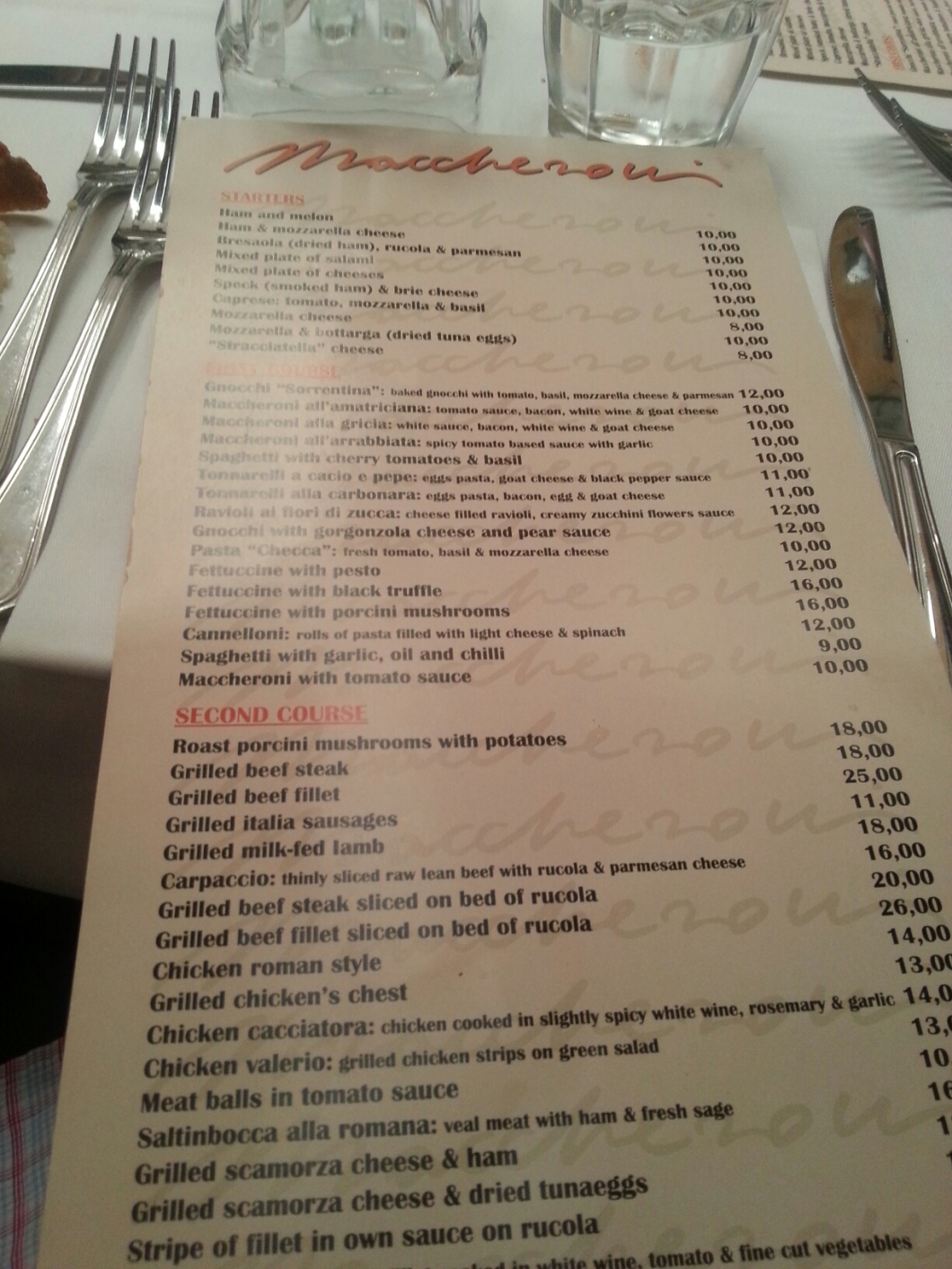 Wine was only referred to on this as house and served in carafes, but a wine list with a decent selection of local wines was forthcoming upon request.

I started off with that Roman (and trattatoria) staple of Spaghetti alla Carbonara. A very simple dish, but one that is so often done badly. I was roundly mocked by my dining companions for choosing a pasta dish to start, but to me I was the clear winner in terms of both taste and portion size (it was main course size but then I am a total pig). This was a proper carbonara (nothing like the ready meal muck masquarading as carbonara we get in the UK ) made with nothing more than pasta, eggs, fatty bacon (called guanciale from the cheek of the pig) and percorino cheese, with a good few cracks of black pepper. The pasta was nicely al dente and the sauce (more a coating) was beautifully rich belying the small number of ingredients. 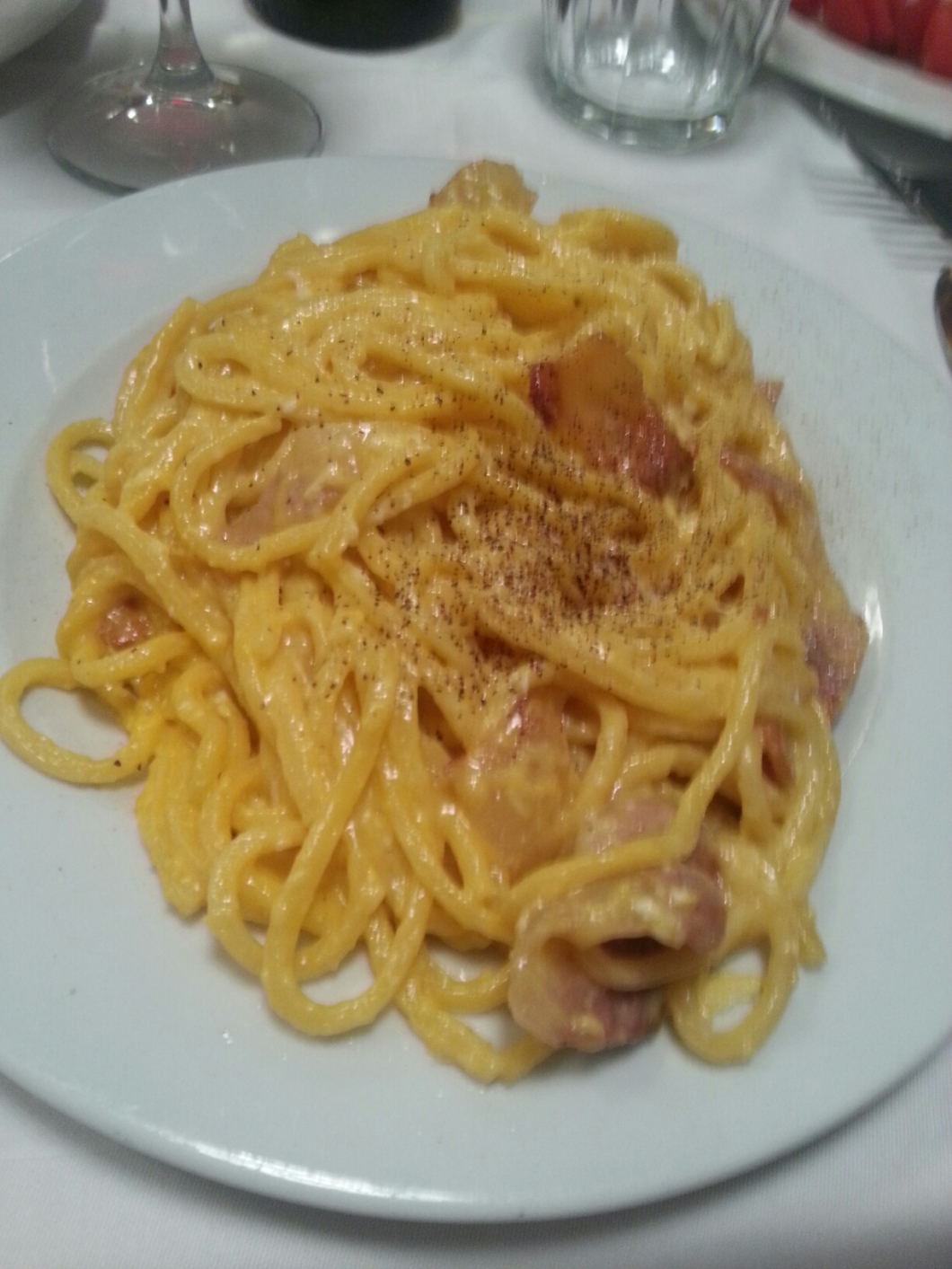 This was not cheap at €10 but was a large (main course size) portion so was in my view good value and very enjoyable.

Other had either ensalada caprese or cured ham and mozzarella. These were all a bit pedestrian with the tomatoes in the caprese, in particular, lacking flavour. 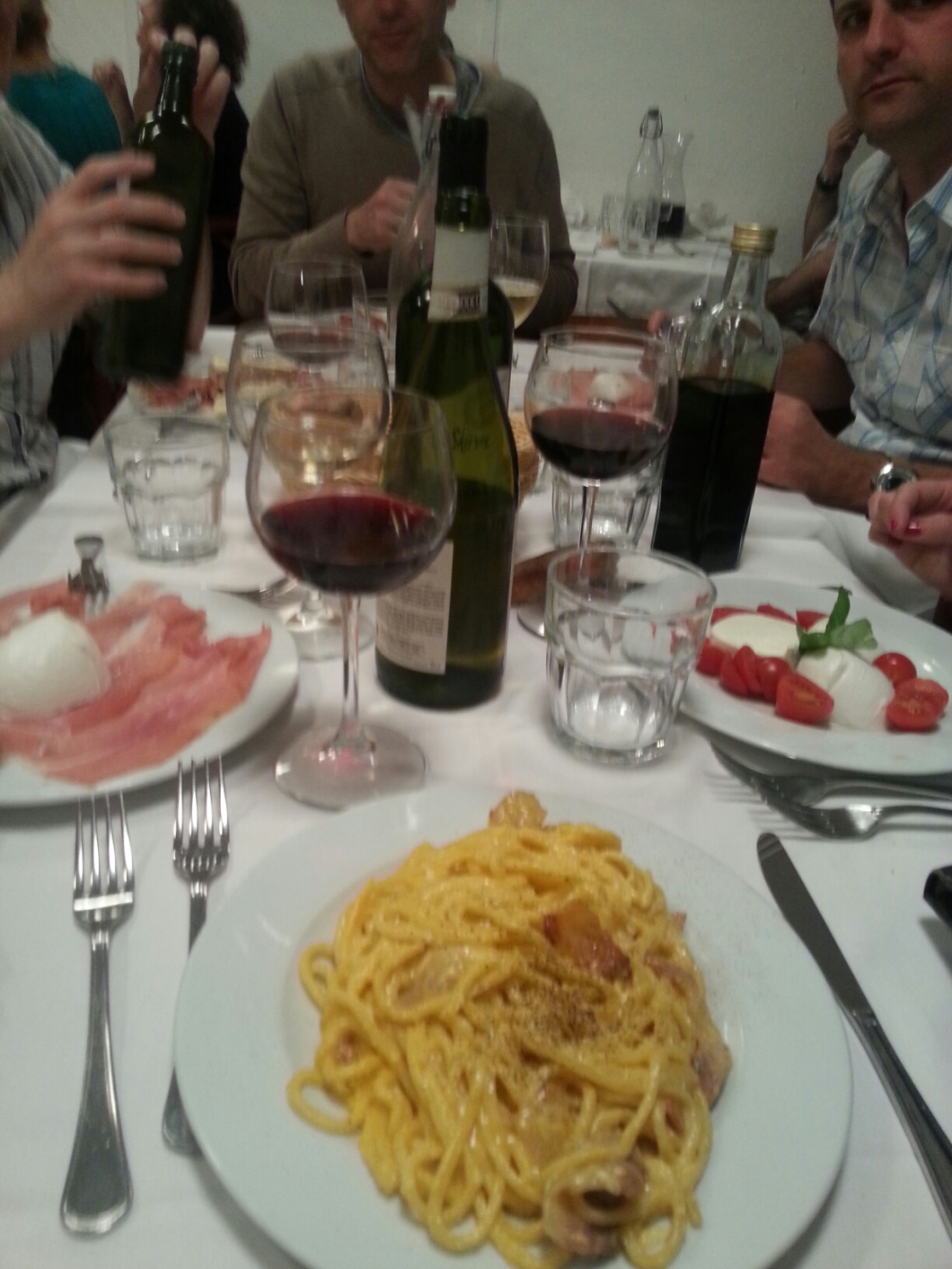 Next up for me was milk feed lamb chops. These were agreeably pink with lots of flavour due to a nice amount of fat. They were also, no doubt due to being milk fed, very tender. This dish came with a rather limp under dressed salad which was a shame as a nice sharp dressing would have had the added benefit of cutting through the fattiness of the lamb.

I also ordered what was billed on the menu as roasted potatoes. I suspect these had in reality been fried in bucket loads of olive oil and thus were sautéed rather than roasted potatoes (this could have been a case of lost in translation). They were nice enough, if a bit oil heavy when eaten with the fatty lamb.

Wine with the meal was a very drinkable local Lazio syrah/shiraz which was very easy to drink and had a nice hit of dark berry fruits that went rather well with the lamb. This was good value at €18. 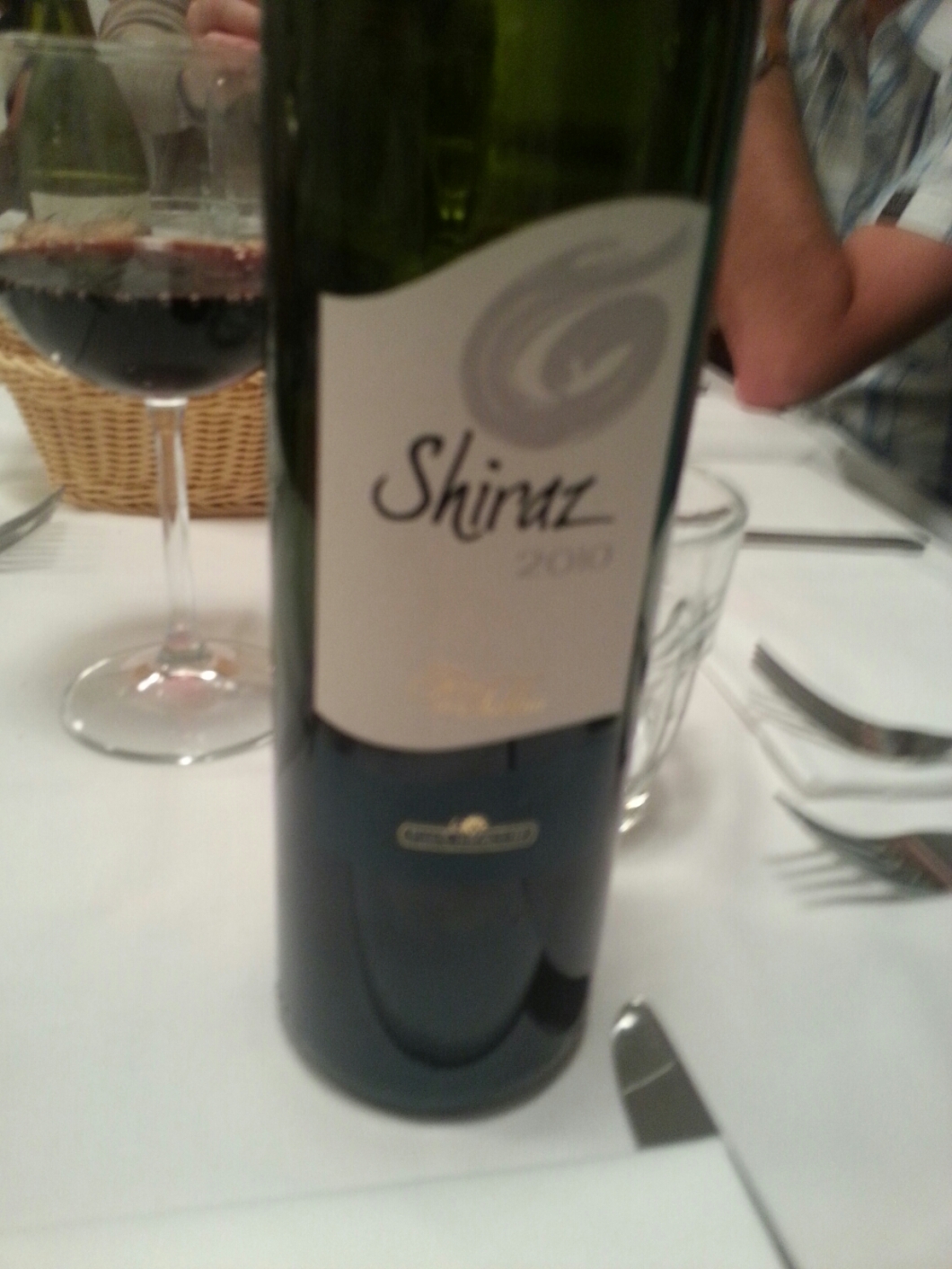 Others on the table had pasta dishes including the restaurants namesake maccheroni. Bar from a slightly duff pasta and cherry tomato dish, these all went down well. Some of the table went for a white in the form of a frascati (again a local wine) which tasted a bit nothingy and was served a touch too warm as well. As such it was not
to my taste, but cheap enough at €15. 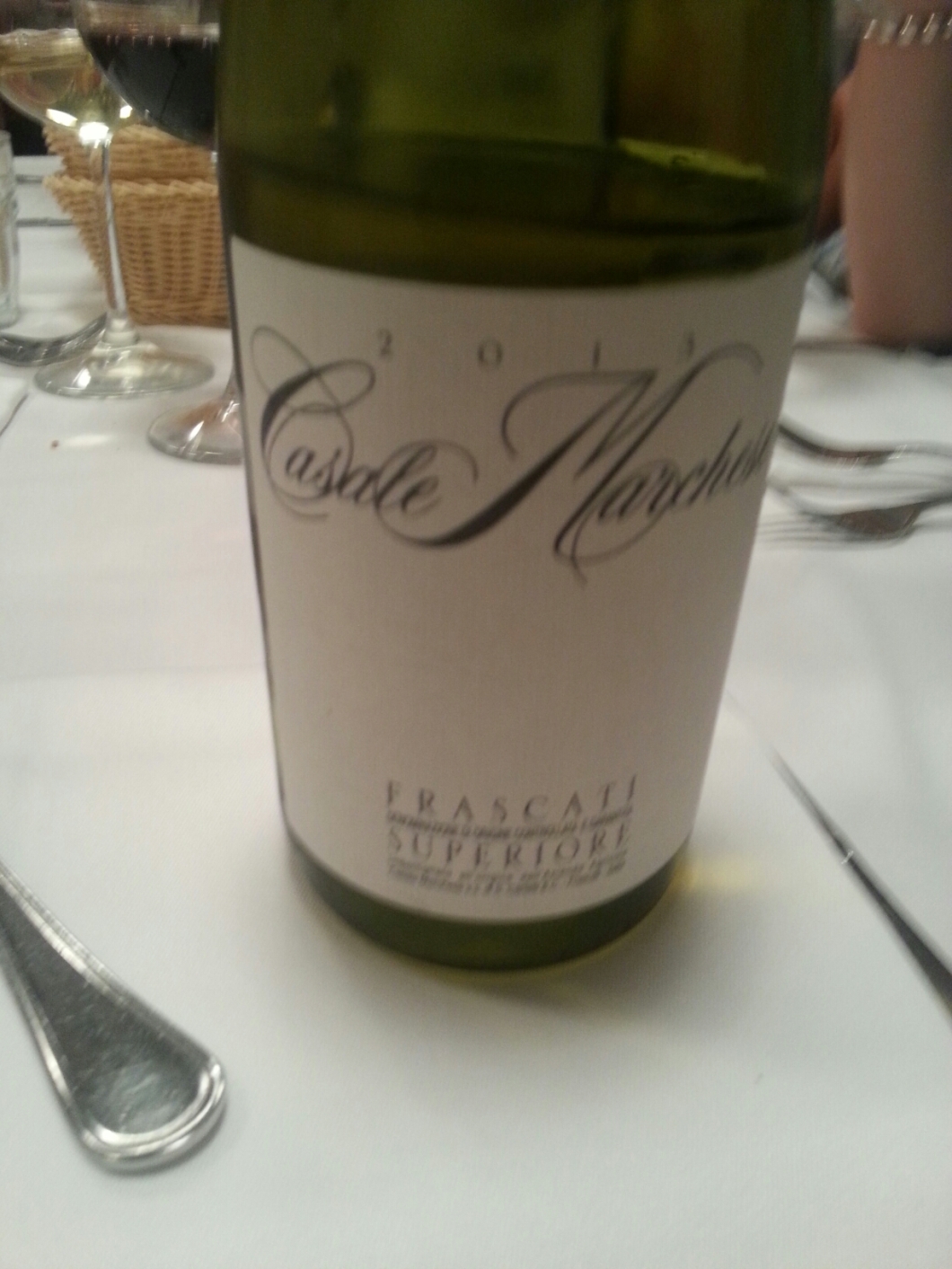 We finished off the evening with a gelato from one of the many ice cream shops off the Pantheon. I initially thought the young lady serving us had taken a bit of shine to me due to the number of scopes of morello cherry ice cream I got for €3, but this rather foolish notion was soon shown to be just that when she served the next person the same amount (if not more) for the same price.

We then had the daunting trip in a Roman cab back to the hotel – alcohol making it slightly less terrifying than the journey in.

My food was nice, if unspectacular, with robust flavours. It was good value (especially as I was not paying, it being on expenses) and with entertaining company making for a pleasant evening full of laughter. What more can you ask of an evening? Possibly not being nearly killed multiple times by lunatic Roman cab drivers maybe.

Would I go back ? Yes I probably would to both the bar and the restaurant, especially with the reprobates with whom I was out with that evening. Cheers guys and token girl – it was a blast.