After much debate (by email) and criticism of my grammar (in my part in those emails- a fair cop I am ashamed to say), it was decided that the location for lunch with the usual bunch of work mates was Truffles on St. John’s Street in Cardiff City centre.

An odd choice, some may think, as it is one of those places that you walk past all the time but never go in. Whenever I do walk pass the place it does always seem to be quite busy, but the clientale tends to be (shall we say) of the older persuasion.

If truth be told we went more out of (morbid) curiosity than anything else.

I would class it as “old school” and this term can be taken as meaning several things. On the food front, one way to view the term would be a nostalgic reminisce as to times gone by when you bought spankingly stuff fresh straight from the farm gate in the days before processed food or the microwave existed. Another would be it harks back to the days of powdered egg, the National Loaf and unspeakable things ending up in sausages (later still occurs all to frequently mind) or some slightly more modern horrors like Frey Bentos pies and Vista curries.

Truffles has been around for over 30 years (longer than I have lived in Cardiff, just) so has survived, when so many have fallen by the wayside, in a fast changing Cardiff over that period. Having never been, I was curious as to its longevity. Would it to be a welcome blast from the past or an anachronism in this modern age?

From the outside it has a nice comforting feel to it. Quite inviting I thought.

Inside it does look a bit dated and somewhat frayed around the edges.

We were by some considerable margin the youngest punters in the place – which is no mean feat as none of us are exactly spring chickens. It did have somewhat of an old person’s feel about it.

The food is what I would style as traditional British cafe.

The menu included greasy spoon classics like an all day breakfast, ham, egg and chips, fish and chips and sausage and mash.

There is also a specific breakfast menu.

Whilst this includes many all day item we had to ask for it (the lunch menu only being provided initially) and I did overhear a waitress saying (to a new staff member I think) that it was only available thoughout the day if they were not too busy.

Added to these were a few more “exotic” items such a waffles, eggs benedict and a special of pan fried hake.

In this sort of place, I think it usually pays to stick with the cafe classics and as a result I went for ham, double egg and chips.

This had a decent amount of proper, thick cut, ham and two runny (good for dunking chips in) eggs. The chips were plentiful, but were (I am sure) frozen and thus not a patch on proper chips.

Not sure as to the point of the undressed garnish on my plate.

For the price of £5.95, I thought it pretty good value and a much better effort than the £10.95 priced ham, egg and chip dishes at the Pelican in her Piety I had a while back and the one I had more recently at the Corner House .

I asked for mayonnaise (I like mayo with my chips) and it is the sort of place you half expect only to have salad cream and to be looked at quizzically if you ask for new fangled “foreign” stuff like mayo. They did as it happened  have mayo.

Of the other dishes, one of our party of four ordered an all day breakfast (£4.95). 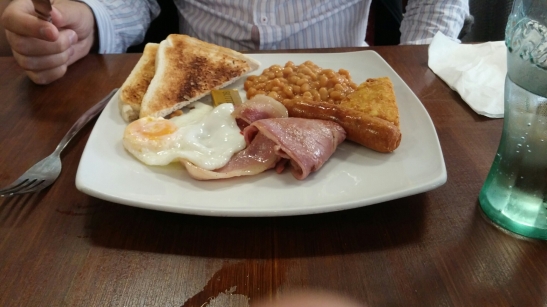 This was pronounced as nice, bar from some flabby bacon (could have done with the fat being a bit crisper) and a somewhat uninspiring looking sausage.

The other two ordered the ham and cheese ploughmans (£7.50), which was a big old portion.

Whilst both said this was fine, the issue here for me was a large undressed salad. I hate undressed salad. To me salad is, in an undressed form, merely rabbit food. This “salad” would have been enormously pepped up by the simple addition of a French dressing. This lack of dressing made what look like a decent lunch dish a bit meh. A shame that, but this is not (in my view) really the place to have a salad.

I thought on balance the food, whilst never going to set the world (let alone Cardiff) on fire, was perfectly fine (undressed salad aside) and very moderately priced.

There is a short drinks menu was both booze, soft drinks and hot drinks on it.

As it was a work day lunch we all went for soft drinks and in keeping with the theme of the post we were somewhat retro with our choices. These included Lilt (£1.25 ) (didn’t realise they still made it and thought it odd that bog standard lemonade was 60p more expensive than the Lilt) and a Fentiman’s dandilion and burdock (my choice and £1.95).

Never had dandilion and burdock before and won’t be having one again. Horrid stuff that tastes of air freshener. I should have gone for the Lilt or, perhaps, a cup of tea.

An old school cafe is exactly what Truffles is. Don’t expect haute cusine here, but from my single visit what they give you is decent enough grub (if you stick to the classics) at a very reasonable price.

I ate all mine and was happy enough with what I got given. 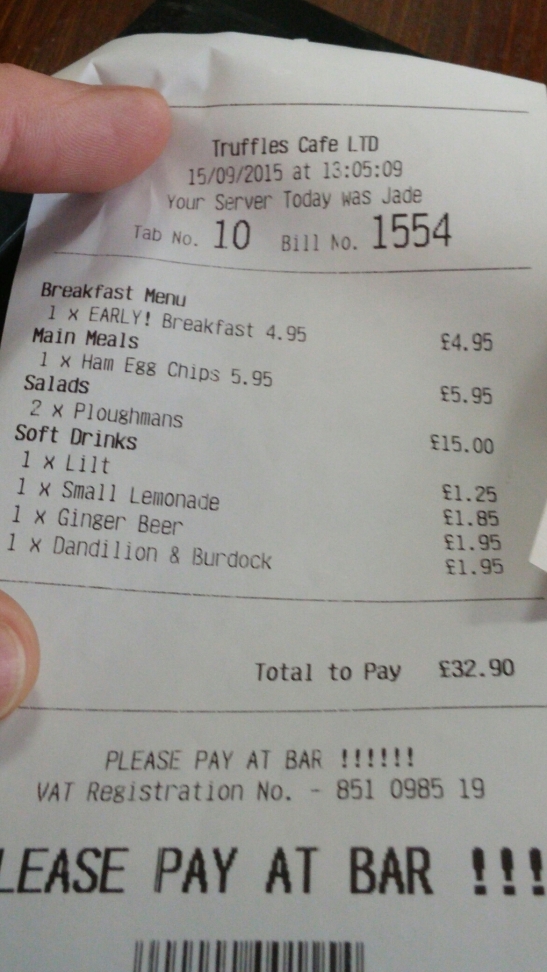 Service was friendly and efficient and deserving of a decent tip (which we gave).

Would I go back? Don’t know if am honest – but probably. It was fine, if not up there with my favourite city centre-ish cafe in the form of the Trade Street cafe. What, however, we got was nice enough for the price and they must be doing something right to have lasted 30 plus year. It does feel like it needs a little bit of TLC in terms of the interior.

I suspect they know very well their (mostly, but certainly not exclusively, elderly) market and cater to their needs. I was happy enough (perhaps showing my age :)).