Can a can can or should they be canned? My first try of canned wines 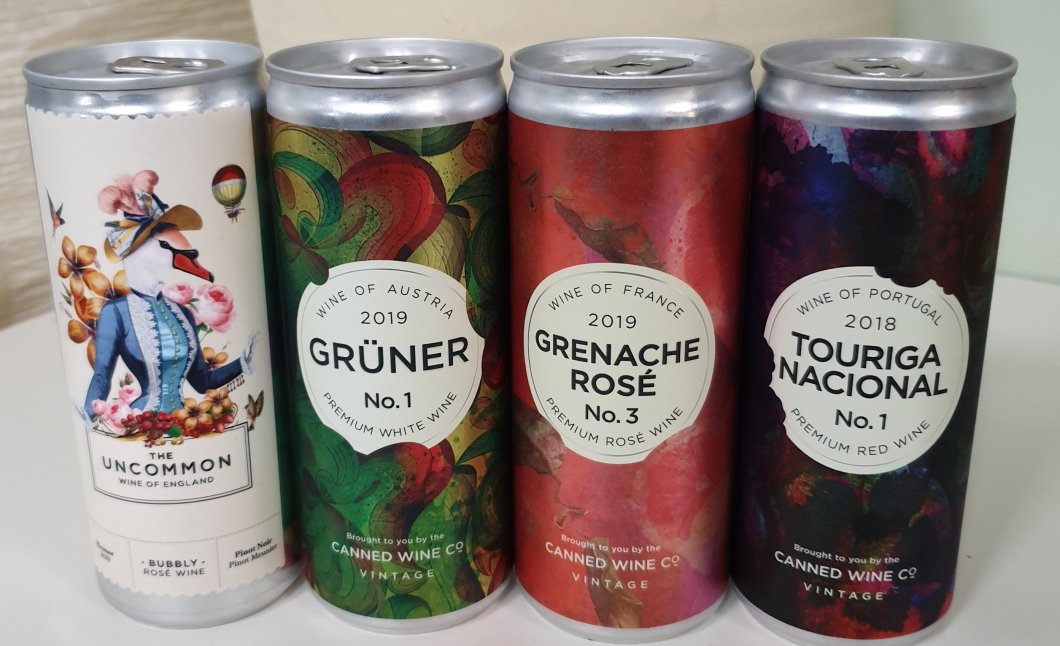 When you think of wine you automatically think of a glass and/or bottle of it (well I do).

Of an evening “Shall we open a bottle of red” or “I fancy a glass of wine tonight” sounds right, whereas a can (at least to my mind) is synonymous with beer or fizzy pop. “Let’s down a few tinnies of wine” or “lets crack open a can of wine” just sounds odd, doesn’t it?

Currently there is almost total dominance by the glass bottle as a conveyance for wine. There are so called “bag in” boxes, which have an unenviable reputation, that are good for the environment and more importantly are getting better quality wise all the time, and a few Tetra Pak ones (the latter I avoid like the plague).

The new kid on the block wine wise, however, is the can. I can see the potential advantages of the can over a bottle in terms of the environment (less weight), easier to store and transport, together with convenient size (each can is 250 ml or less so a large glass or two small glasses max). In theory, an excellent thing for a picnic, subject always to the stuff inside being of a decent quality.

I have seen an increasing number adverts for canned wine and thought lets give it a go. This resulted in me buying a 3 can pack from “The Canned Wine Co.”.

I chose that company because their selection seemed to be a little more adventurous than most, with a Grüner Veltliner (from Austria) and a Touriga Nacional (from Portugal) in the mixed pack (as well as a more conventional French rose made from Grenache).

Delivery was free and very prompt (on the basis of my £15.99 order – it seems to have gone up in the interim and a delivery charge added). I ordered on the Tuesday and the package arrived on the Thursday

All very neat and rather intriguing.

To this I added a fourth can, in the form of an English rosé fizz from “The Uncommon” (which sounds like a naff Western). It was called “Eleanor” and I picked it/her up at M&S (for £5.99 I think). 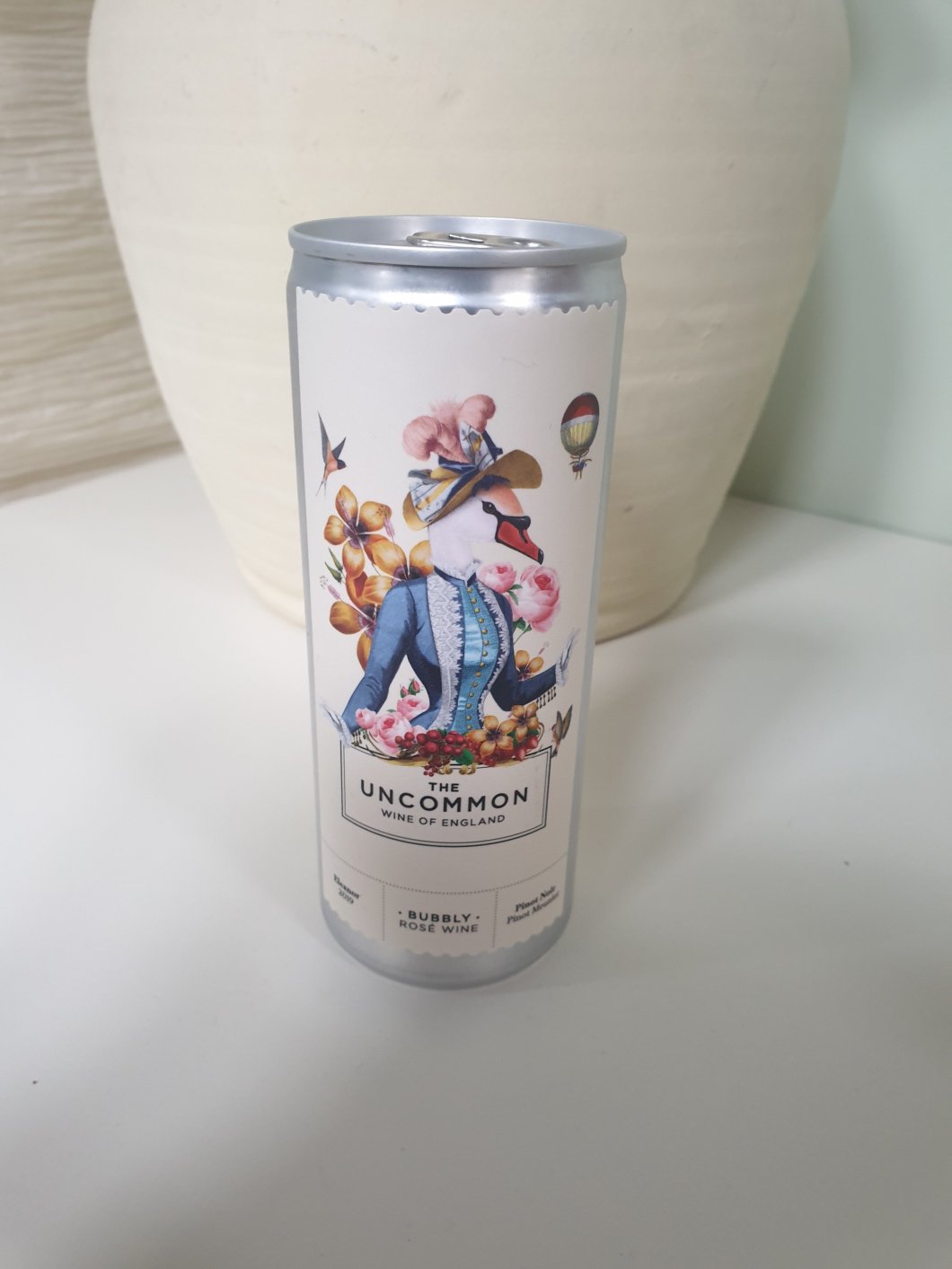 So to the wines and whether they “can” be regarded as passing muster or should just be “canned/cancelled”.

Three of us (Mrs. SF, J and I) tasted them (after a rather fine afternoon at Vermut and Asador 44 – which put us all in rather good cheer) and here is what we thought.

First up was the Eleanor fizz from The Uncommon, which is billed as a bubbly rosé wine. Very stylish can I thought, which certainly attracts the eye.

A classic for pink fizz blend of pinot noir and pinot meunier (with the grapes being from Kent and Hampshire) it had quite a daygo pink colour to it.

Could have been the Sun, but it looked a bit artificial I thought.

On the nose the aromas were of summery red fruit (strawberry primarily). Quite promising.

On the palate, it was bone dry (like one of those lean, zero dosage, proseccos) and we all found the bubbles a little bit aggressive (not a particularly fine mousse).

On the palate the summer fruits came through, but it did feel a bit underpowered and lacking va va voom. Not bad, but certainly not a wow wine.

This brings me to the price of £5.99 for a 250ml can. That scales up to a smidgen under £18 and this is my problem with this wine. I can get Bodegas Muga’s very good Conde de Haro fizz for £14.99 (from the hardly cheap Waitrose) or (at least I could) the really excellent Phillipe Michel Cremant de Jura from Aldi for well south of a tenner.

Bravo in terms of this being an English wine and that is reflected in the price (English and Welsh fizz is certainly not cheap). This is a reasonable effort I think, but not something I would rush out to buy again if truth be told.

Grüner Veltliner is one of my go to white wines. So versatile with food, it is the tasting menu wine par excellente.

This one had a nice bright golden green colour to it,

with a decent nose of orchard fruits and a touch of herbaceousness, as well as peach.

On the palate it had more of the orchard fruit and a hint of citrus sitting in the background, but lacked that peppery finish that I adore in a good Grüner.

Nice enough, but it works out at nigh on £18 for 750ml and you can get a very good grüner for that price. The Brundlmayer Berg-Vogelsang Grüner Veltliner may be a couple of quid more expensive, but for that little extra you get a way (and I mean way, way) better wine.

I also preferred this Lidl number from Northern Italy,

Mrs. SF is a big fan of a good rosé and this looked quite a promising colour,

with a nice salmon pinkness to it.

On the nose it had a touch of red summer fruits, which was pleasant enough.

The palate was again summer red fruits (strawberry) and raspberry.

As with the Gruner – not bad, but it doesn’t (at least to my mind) stack up as against cheaper rosés.

I can get this grenache based number

from Costco for less than half the scaled up price and I (and Mrs. SF) simply prefer the latter wine.

I had high hopes for this, as Portugal is a treasure trove of undiscovered (taking Port out of the equation) beauties wine wise (at great value prices) and the Touriga Nacional grape can make glorious wine. Regrettably this isn’t one of them.

A deep rich colour held out promise of a fruit bomb,

but all I got was a blast of weird amost artificially created flavour.

To me it smelt like the results of a computer being programmed as what fruit tastes like and missing the mark big time in trying to recreate it.

I would say a “Frankenwine”, but wines from Franken are actually rather good (if rarely seen over here, with their bocksboutels).

On the palate it was no better – not off, just not very nice.

J (not one to baulk at many/any wines) pronounced it undrinkable (she used slightly more floral words) and promptly poured it down the sink.

After Mrs. SF and I picked ourselves up off the floor, having both fallen off our chairs at this most unlikely of statements and actions from J, we both tried it and quickly followed suit.

I would have been peeved if I had paid £3.99 for a full bottle of this and for £18 when scaled up to 750 ml it was really quite grim (not fit for man nor beast or even the cooking pot).

In keeping with the can theme, I would say this is the wine equivalent of spam.

Its awfulness was put into context by an Aldi Portuguese number (£4.99) we defaulted to (I bought it for comparison purposes).

No great shakes, but perfectly drinkable and an absolute blessing after this canned horror – all for less than a third of the price of the canned product (when scaled up or down).

People often say to me they don’t like wine, which always perflexes me – but if this is the only sort of wine they have experience of drinking then I could perfectly understand such a sentiment

Three of the four canned wines were OK and pretty drinkable. One (the red) was just plain poor.

Even with the OK ones you are paying a hell of a premium for the supposed convenience and environmental cred. of a can.

My initial view was these could work on the train home or a picnic, but J pointed out she wouldn’t be seen dead drinking wine from a can on the train or otherwise and I suspect she is not alone in that view. So you need a glass and that just throws the convenience argument right out of the window.

I would say 3 cans are definately lighter than a full glass bottle, but is the process of manufacturing 3 cans that much better for the environment than a bottle? I dont know, if I am honest, but have my doubts.

Out of all of them I think the fizz is probably the one that works best. The small format is well suited to fizz, which tend to have a heavier bottle, and the also closures for half finished fizz are more tricky. The small format works quite well here and the quality of the fizz was probably the best, so it represent the best value (Gruner was a close second), especially as it is an English fizz (they are never cheap).

So would I buy again. In summary, no – any benefit in terms of convenience is offset (and some) by the price. The only one that had any real merit to it was the Eleanor from the Uncommon, but I don’t tend to drink much fizz.

J, as a youngish (well compared to me, but most are) professional who likes a a drop of wine and is open to new ideas (as opposed to a stick in the mud, winosaur, like me) is probably the ideal target market for canned wines (hence me being interested in her opinion of these wines) and she wasn’t convinced by these one little bit.

To me the big issue is the cost. They (with the exception perhaps of the Eleanor) are simply too expensive for what you get. At a “scaled up” price of between £17 and £18 (a bottle) you can get a very good bottle of wine (if you are canny – excuse the pun). Why would I pay what would be a premium for an inferior wine just because it comes in a pretty can?

I simply can’t think of a good enough reason to switch from a bottle to a can even on the odd occasion that convenience might be a factor or for the green brownie point/benefits (I suspect these are minimal, but may well be wrong in that view).

Not for me nor (if J is anything to go by) their likely target market, at least until the quality to price ratio improves significantly.

Recommendation for “better” canned options are more than welcome, but to me these are simply not worth the prices being charged.