A legend of the Levant! Chateau Musar tasting with the Mystere Wine Club

There are few producers that define a Country wine wise – wines so synonymous with a region that they almost become one in the same. The  hoover and vacuum cleaners of the wine world, if you will. One such wine is Chateau Musar, the legendary wine of the Lebanon.

Lebanon’s history has been turbulent to say the least, but amazingly amongst the turmoil of civil war and foreign invasion Chateau Musar (established back in the 1930s) has only ever not been made in one year (1976 – the civil war started in 1975 and raged for 15 years). Not even the Israeli Grapes of Wrath Operation in 1996 stopped the harvest and wine production. 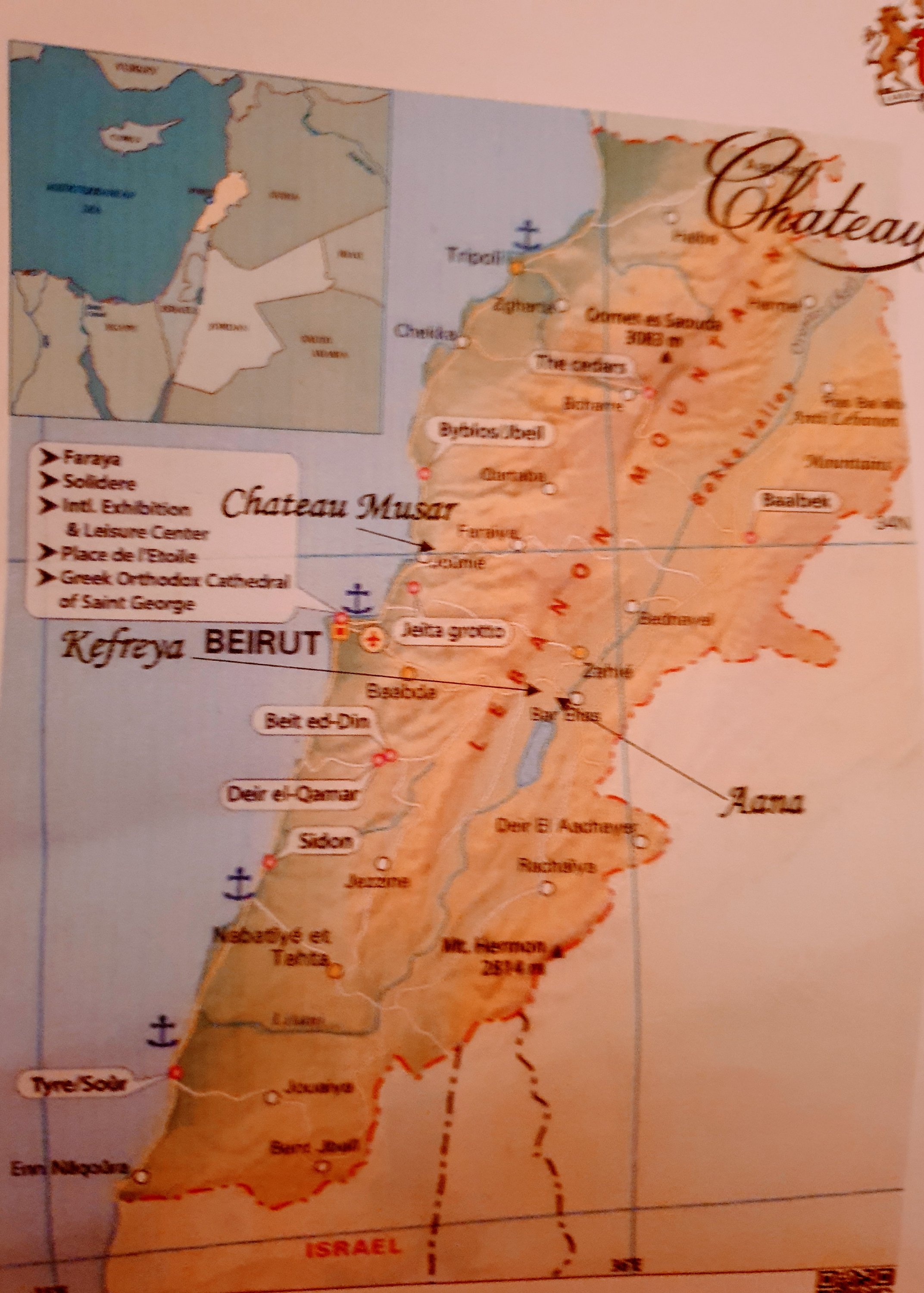 and in the bad old days the harvest was often transported under gunfire.

Lebanon is in the news again for all the wrong reasons due to the shocking explosion in Beirut and it seemed a rather apt show of support for the Country to showcase one of their most well known and sucessful exports in the form of the wines of Chateau Musar at a Mystere Wine Club tasting.

Whilst the Chateau produces whites and rosé it is probably most well known and revered for it reds, with it shooting to fame after its 1967 vintage was hailed by another legend, in the form of late and great Michael Broadbent, as the ” Wine of the Fair” at the 1979 Bristol Wine Fair.

We were very lucky to have Elliot O’ Mara of Chateau Musar (UK) leading the tasting – love a tasting where you can get info. about the wines straight from the horse’s mouth.

I have to say the Mystere Wine Club has got this online tasting malarky down to a tee, with eight pours (50ml each) into little bottles done centrally and pick up from various agreed Cardiff locations (one very keen chap drove from Oxfordshire to pick his up). 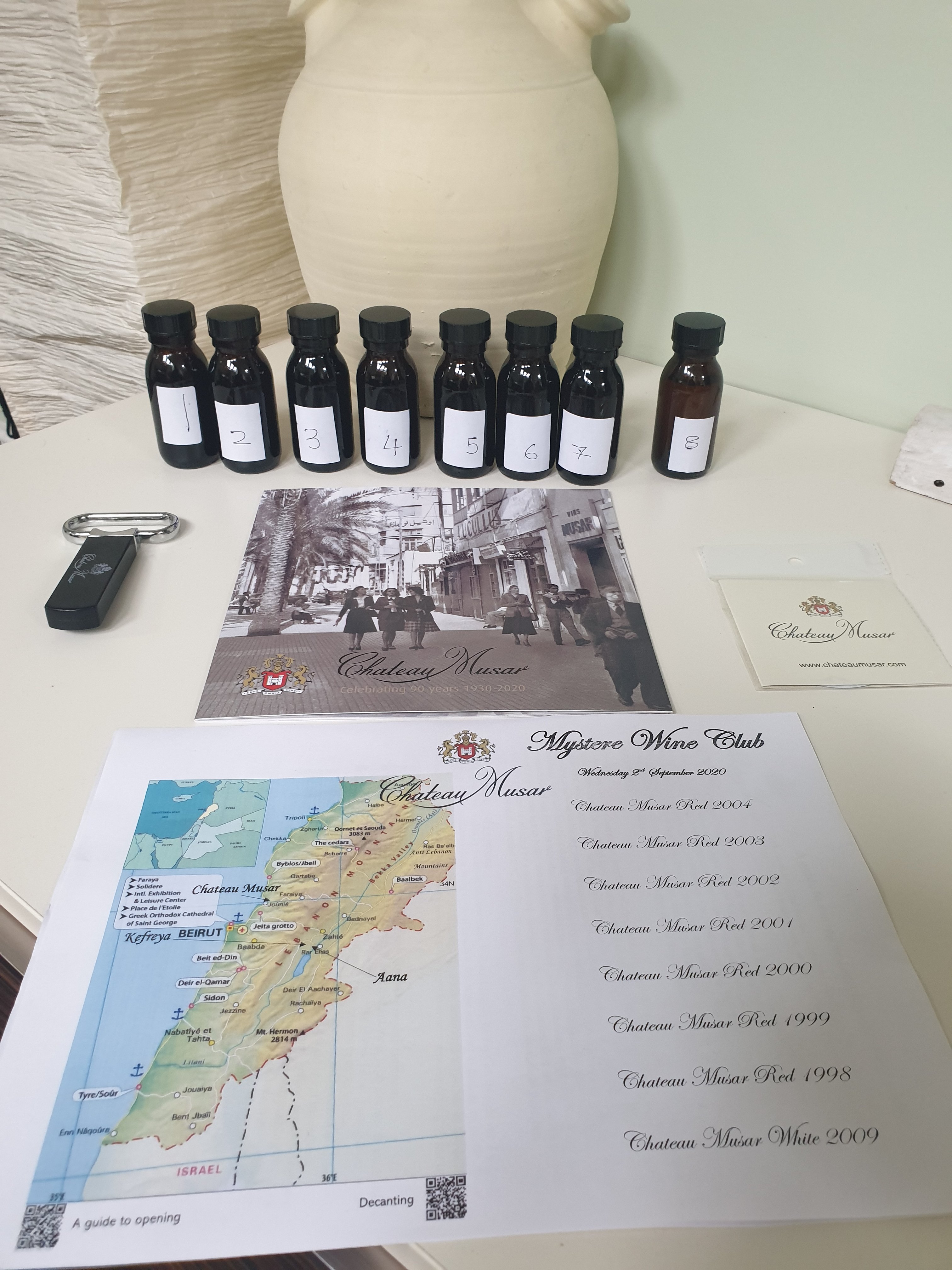 A little bag of goodies, including an Ah – So wine opener (essential bit of kit to get out the often fragile corks from older vintages) and foil pourers from Chateau Musar, was a very welcome surprise,

So to the wines, where we rather defied convention and tasted the 7 reds (all the top Chateau Musar cuvee) before the solo white.

The reds are a blend of Cabernet Sauvignon, Carignan and Cinsault, with the proportions of each being pretty constant from year to year (surprised me that as on tasting some seem to have a clearly dominant grape).

All set up I was raring to go. 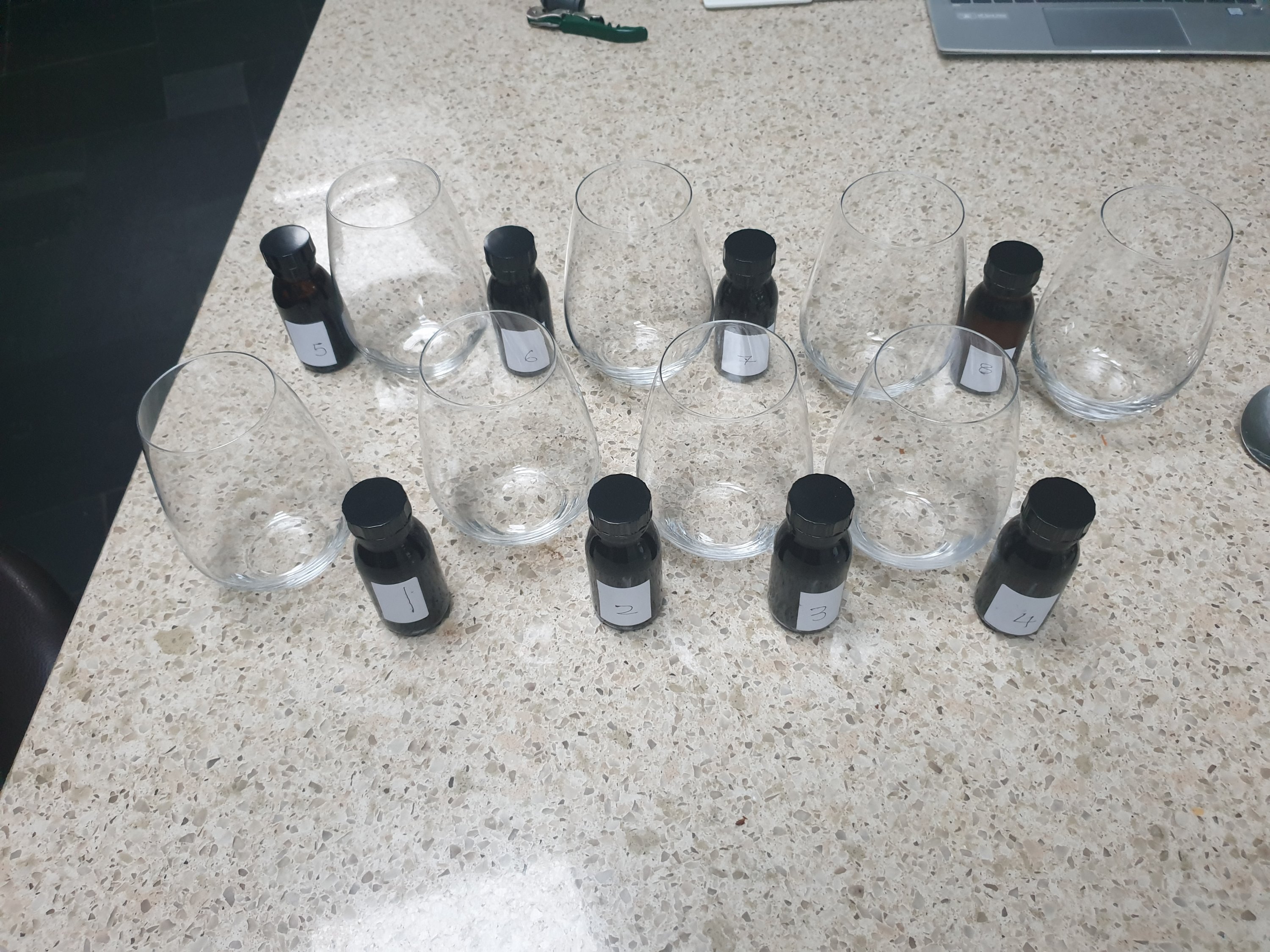 Still a baby for a Musar, the 2004 vintage was regarded as a once in a decade vintage with it being viewed as a producing concentrated and powerful wines.

The colour is starting to show some ageing, with a distinct brickiness to the red.

On the nose it was quite earthy with cedar, spice and a touch of leather.

On the palate, it felt a touch hot to me, with tannins still in evidence.  There were red fruit (raspberry and red cherry) to the fore, with a nice refreshing acidity. Very nice start to proceedings.

A rainy winter gave way to a dry spring and summer, with a mini heat wave in May (at the point of flowering) reducing the crop by 30%. 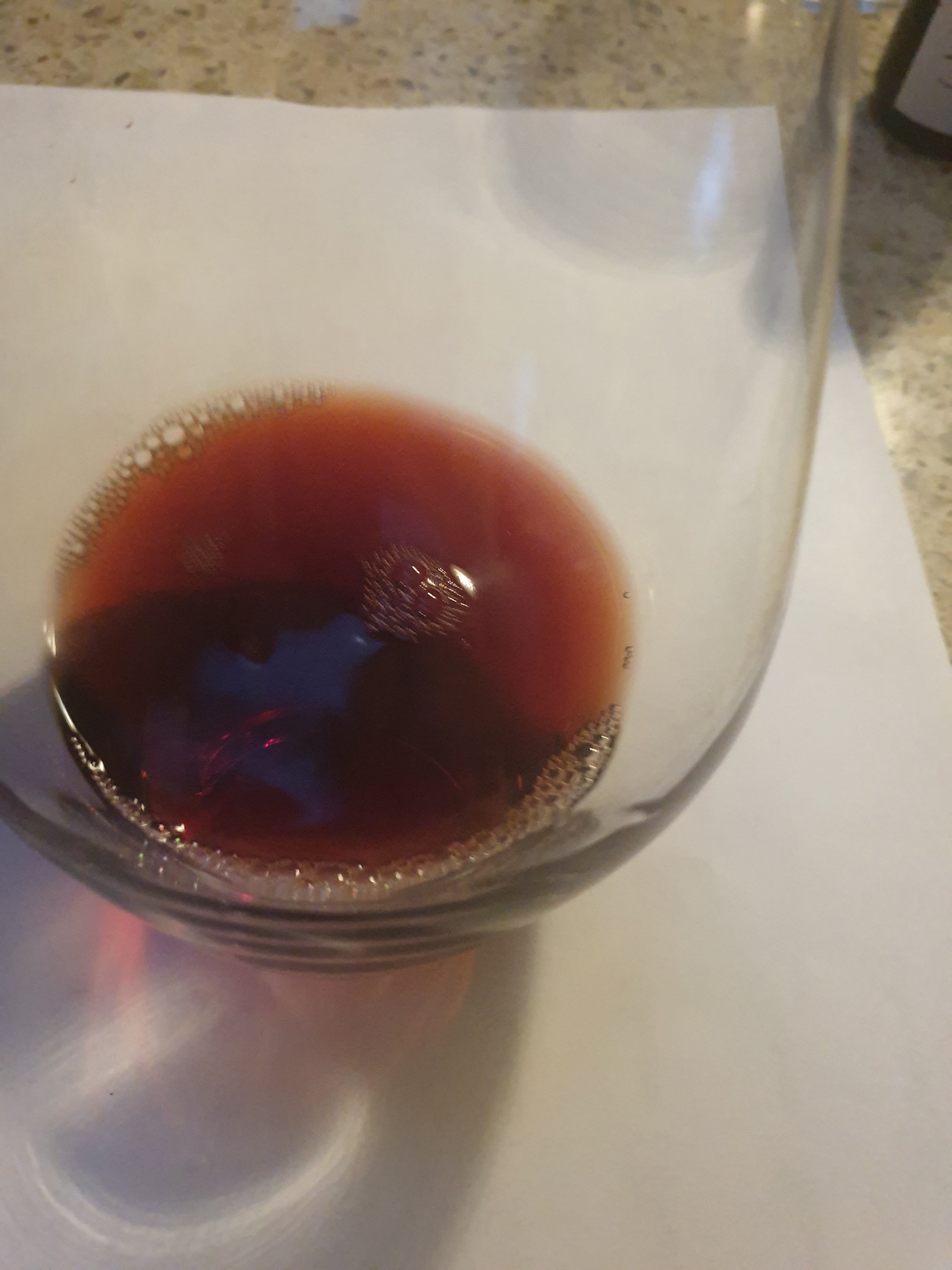 but with a noticeably different nose. Here there was much more gameiness, funk and spice.

On the palate it was noticeably sweeter than the 2004, with dark fruits (black cherries and damsons) to the fore. Tannins were more intergrated here and there was, perhaps, more acidity than the 2004

A long and cold winter meant the vines took longer to mature, with a later harvest than previous years. Due to varying degrees of maturity there was a lot of selectivity.

Colour showing the wines age, with a distinct brickiness.

On the nose it seemed to be cabernet sauvignon dominated with a initial hit of cedar, followed by chocolate. Touch lean on the nose compared to the more expressive 2003 and 2004.

On the palate it felt quite boozy with the fruit raisened/stewed and a distinct meatiness.  Still some acidity here, which suggests it will keep going strong for a long time yet.

A year with little rainfall and a very  hot summer. This cause the cinsault element of the blend to struggle a bit.

Lightest of the wines so far,

with a touch of funk/farmyard in the mix and crunchy cranberry. I thought I got a hint of oxidisation.

On the palate there was more funk and then leathery note,  but I found it a bit dried out and again got oxidisation. No-one else got the oxidisation and this scored very well on the night overall. It was my lowest scoring wine of the night and it almost seemed like I was tasting a different wine to the rest of the group?

Regarded by the winery as a wine that is quite Bordeaux in character, this wine had a brighter colour as against the previous 2001, 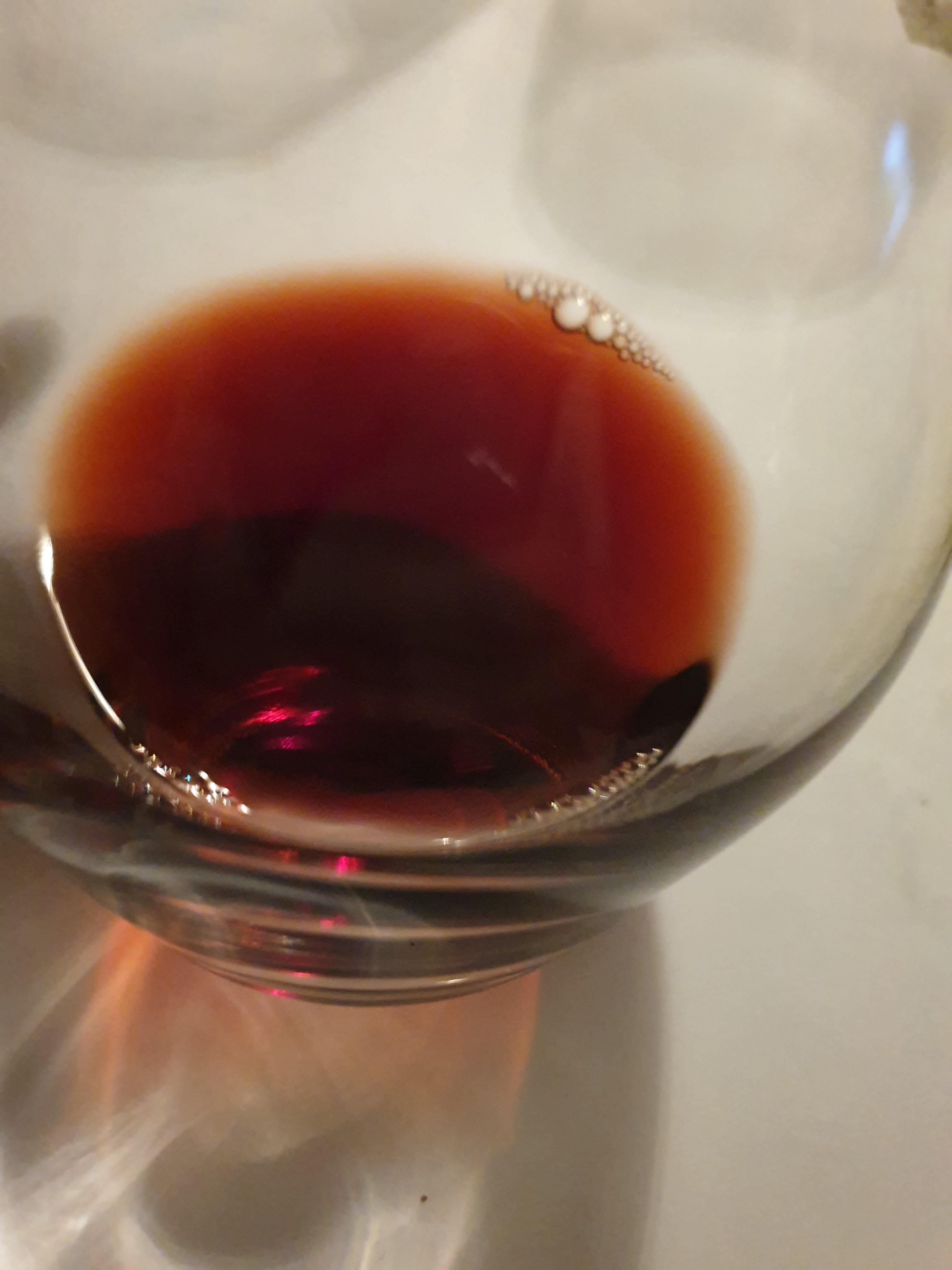 with a very expressive nose. Very earthy, with lots of funk and perfumed notes (truffle or even incense) wafted up as it sat in the glass
On the palate it was rich and spicy, with red fruit and meatiness and  truffle coming through at the back end. Big shoulders to this wine and a great length, with it lingering on the palate for an age. I ranked  it 3rd on the night.

A dry winter was followed by a fresh spring and a mild summer, with the heat turned a notch in September.  All in all mak8ng for an exceptional year for growing grapes it seems.

Lovely bright colour to this wine, with some bricking on the periphery.

On palate, it was a weighty number. Notes of  mushroom, wood smoke, spice and heady truffle. Glorious stuff that lingered for an age.

A  normal Lebanese winter with a mix of rain and snow, with a damp spring and then no rain between June and October lead to a heathy crop of fruit

to me this was a much less expressive  wine on the nose. I thought I got a whiff of chlorine initially (no one else seemed to) and then some red fruits (but not much). Found the nose quite lean and that perceived chlorine rather coloured my feeling on the nose

On the palate again I thought it quite lean and all a bit stripped out. Felt rather light weight as against the 1999.

As with the 2001 it felt as if I was tasting a different wine to everyone else. Others tasting scored this highly, referring to its Burgundian qualities. Am afraid I just didn’t get this wine. Second lowest scoring wine of the night for me.

The Musar White is made from a blend of Obaiheh (66%) and Merwah (33%). Not grape varieties (sound like the names of Old Testament  characters – apt for the area) I am particularly familiar with, but on reading up on them it seems these grapes are indigenous to the Lebanon and are ancient ancestors of the  chardonnay and semillion grape respectively.

Ageing is partly in oak barrels and partly in steel vats.

Lovely deep golden colour with a hint of green to this wine, 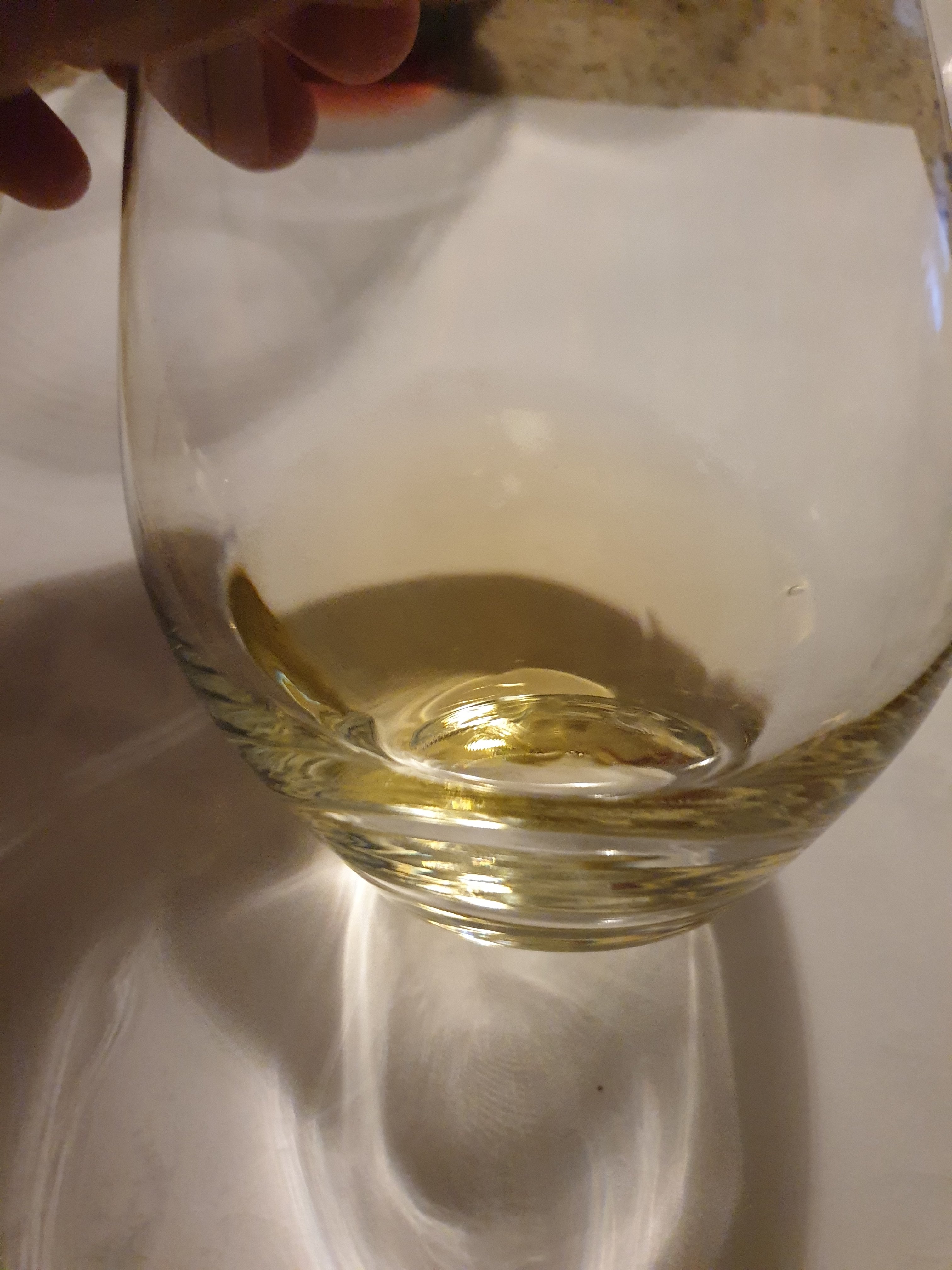 and a stunning nose.  I got citrus, incense, banana and a distinct butteriness. As it developed in the glass lovely honeyed notes and  minerality came through.

On the palate there was sweet yellow fruit (apricot and mirabelle plum), fruit salad sweet, vanilla and a simply gorgeous creaminess. It had a oily texture to it that really coated the mouth, with a resultant great length.

Stunning wine and one I would love to age for another 15 – 20  years to see how it develops. Thinking it will age beautifully like some white riojas and dry semillions.

Fantastic tasting with some belting wines. 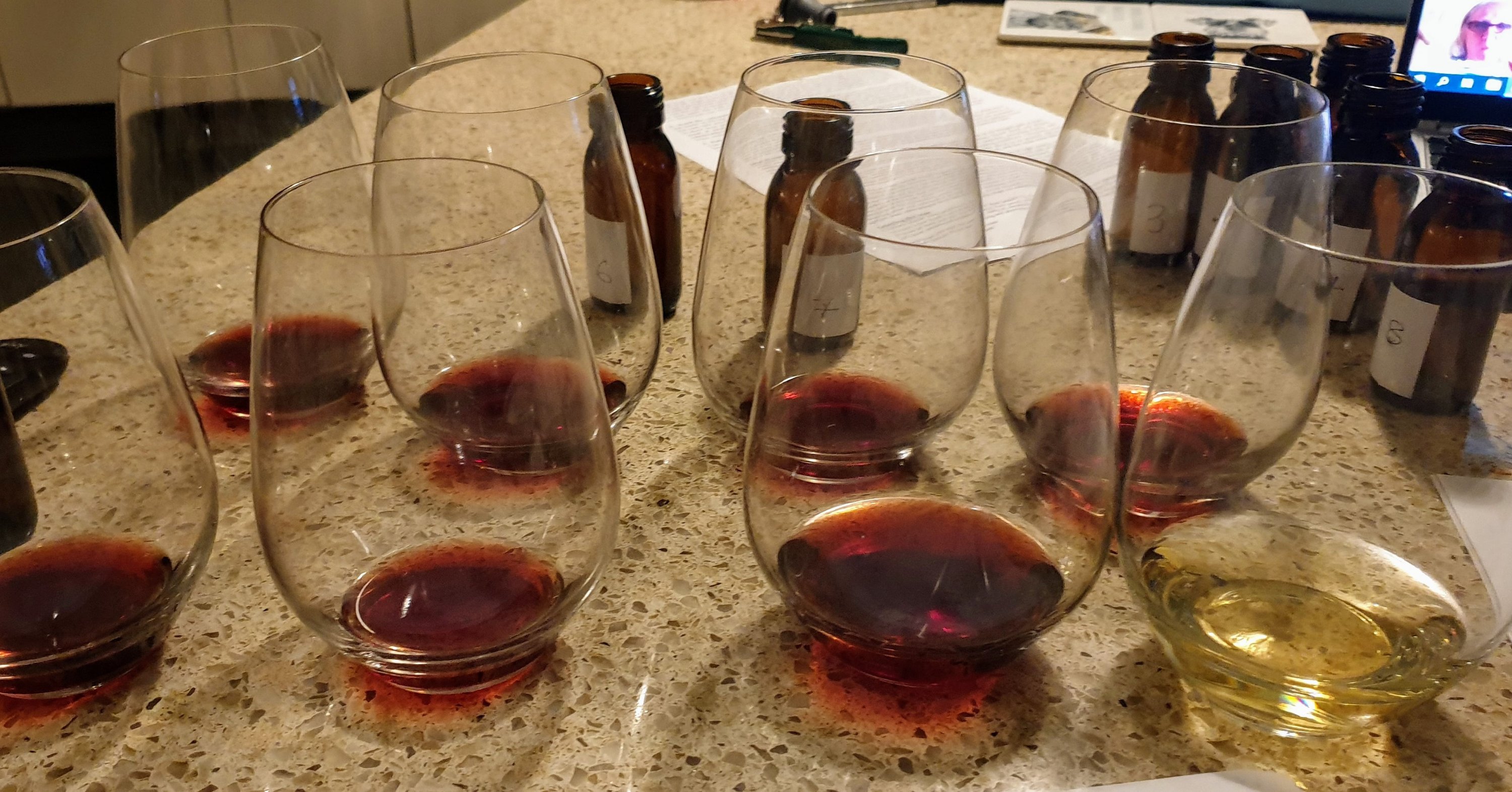 My top three were as follows:

I was in line with the rest of the club re the first two and way off re the 3rd one (I was the only one to give it a score). I was less enamoured with the 1998 and 2001 vintages which both scored well with the wider membership.

The overall top three from all attendees were:

Huge thanks to Chateau Musar and Elliot O’Mara for a great tasting, wonderful insight and some very generous goodies.

I am very happy following the tasting to have the opportunity  to get my hands on a 1991 Chateau Musar blanc at a very good price – really looking forward to trying that.

As a side note, Beirut/Lebanon is in a parlous situation at the moment and there are many ways to help.  The recommendation from Chateau Musar is to donate to the Red Cross appeal through this Red Cross donation link. In keeping with the tasting £5 from the sale of each Chateau Musar book ( Chateau Musar: the story of a wine icon  – detailing the extraordinary  history of the place) is currently being donated to associated charities

There is always the option to buy some Lebanese wine (from Chateau Musar or from the raft of increasingly good other producers in the Lebanon). Every little helps and you get the bonus of some lovely wines – win win!

Viader Vintners and Mumbles Fine Wine stock various Chateau Musar wines, whilst the Bottleshops in Cardiff has some interesting other Lebanese producers on the shelves.

Leave a Reply to Lockdown drove me to it – the best soliciting (flavours) of 2020, Part 2 – the booze – Soliciting Flavours Cancel reply