This post is slightly later that usual and a bit shorter (yes I know it is still quite long, I can’t help myself) as for some reason WordPress decided to delete all of the content of the post I had originally and oh so carefully drafted, but not the title (so I cannot have deleted the actual post in error). Cheers WordPress!!! People familiar with my many and varied IT trials, will know how angry IT issues such as this make me.

So at the second time of writing, Mrs. SF and I were long overdue a break with my batteries in serious need of a recharge, As Oscar, our new dog, is not quite ready to be left at my Mum’s (Pip on the other hand loves it there being allowed both on and in the bed, something strictly banned at home), we decided on a staycation with the dogs in Aberaeron in West Wales. Luckily a friend has a lovely holiday cottage there which was where we stayed. Regrettably it is up for sale and I so wish I had the cash to buy it.

The West Wales coast is a glorious place to visit for a holiday, especially when the sun is out and we got lucky in choosing a great week weather wise for our visit. 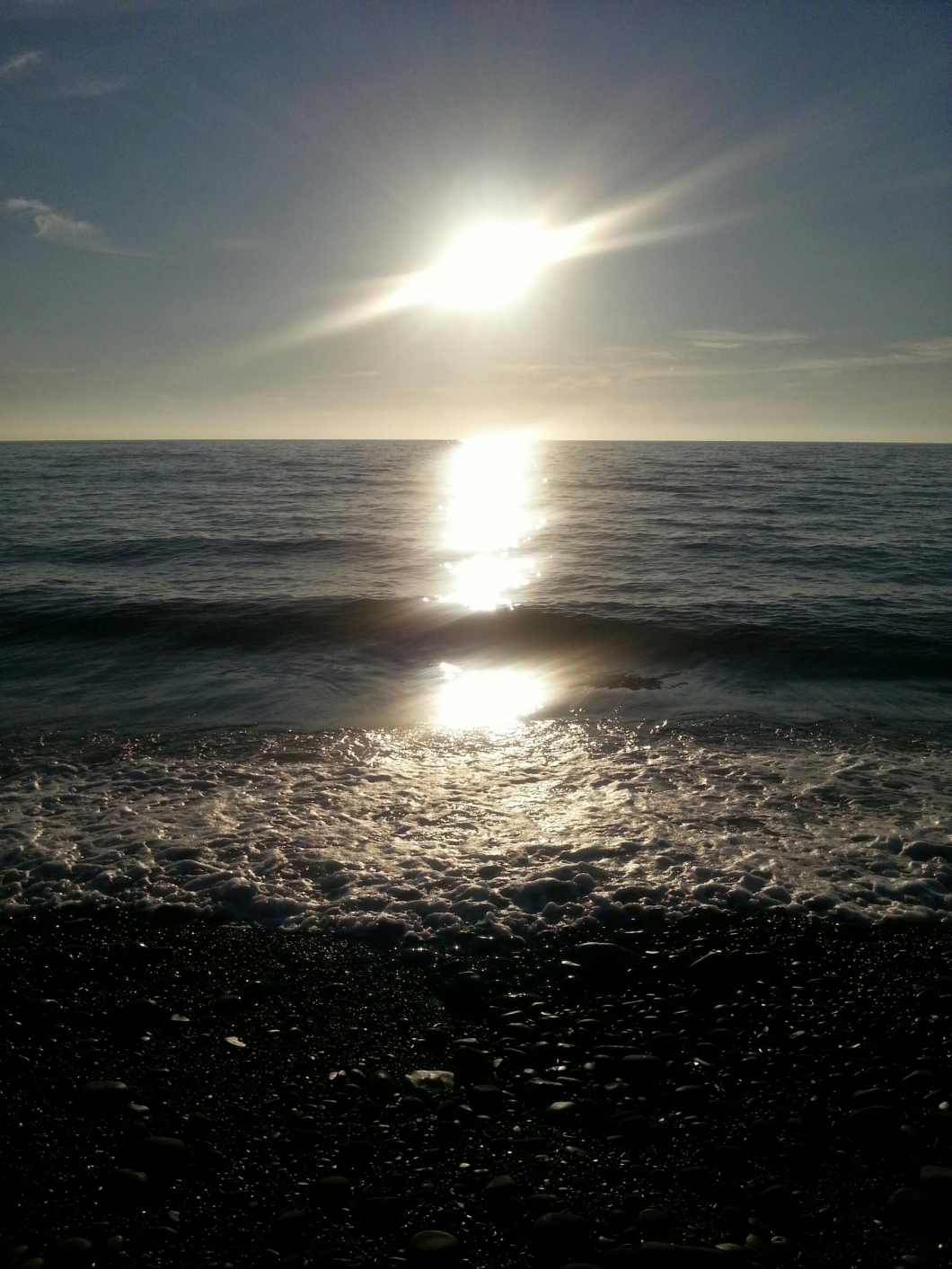 The sun and I have a tacit agreement that if I don’t expose my blue tinged skin, it won’t burn me to a crisp. This agreement I breached in daring to don shorts and a t-shirt (I apologise to the good people of Aberaeron for the trauma that sight must have caused) and the sun’s retaliation was swift and brutal in that it turned me a nice shade of cooked lobster pink. I covered up thereafter, which made me look even whiter as against Mrs. SF who over the week went a lovely shade of bronze.

Aberaeron where we stayed is a lovely town, with a gorgeous harbour lined with pastel coloured houses and has the added benefit for us of being on the coastal path (so great for walks with the dogs) as well as having a dog friendly beach. The later was a particular favourite of our border terrier, Pip, who gets excited beyond belief at pebbles being skimmed across the sea.

Aberaeron has a number of good eateries including the well known Harbourmaster Hotel and the perhaps less well know but rather good The Cellar and Manuka (more on a meal at the latter in my next post). This, the sun, sea and red wine (the main topic of this post – yes I am getting to it) made for a lovely week and a happy me.

In terms of the reference to wine in the title, regular readers will know I have been quite impressed by Aldi’s selection of wines in particularly the whites and I thought it was about time I looked at the wine offering of that other German discounter,Lidl . The week in Aberearon was a perfect opportunity to try their wines at my leisure

In store none of the whites took my fancy, but I did spy some reds that were from regions a bit off the beaten track and I picked up three wines from Platz in Germany, Priorat in Spain and Basilicata in Italy.

Germany is righty famous for its white wines (and no I am not talking about Blue Nun), with to me Riesling being the noblest and greatest of the grapes used to make white wine, but most people are surprised that they also make red wine. German reds are still a rarity on the UK high street (M&S do do a nice enough German pinot noir) and therefore when I saw this red in Lidl I thought I’ll have some of that.

The label stated that it has aromas of vanilla and red fruits, but I got no vanilla at all with the smell being a pleasant enough red cherry.

On the palate, the red cherry theme continued with the taste being of slightly unripe and thus sour rather then sweet cherries. This wine was easy drinking and not bad at all for the £5.99 price tag. It worked well with and without food. All in all a decent quaffing wine.

Priorat is a small wine producing area in the Catalonia region (south of Barcelona and just inland from Tarragona) in the North East of Spain. It is a difficult place to make wines with yields being very low which means quite concentrated, but often pricey wines. Top priorats (such as Alvaro Palacios’s L’Ermita) go for serious money (by this I mean hundreds of pounds) and even at the lower end you are talking £20 plus. As a general rule if you want a cheap Priorat tough, buy a wine from the neighbouring Montsant region (not quite as good, but much cheaper). On this basis when I saw a Priorat in Lidl for £5.99 I was instantly suspicious. Rather than thinking woohoo that is cheap I was thinking god I bet it is dire. In the interest of research I of course had to buy it, but did so more in hope than expectation. 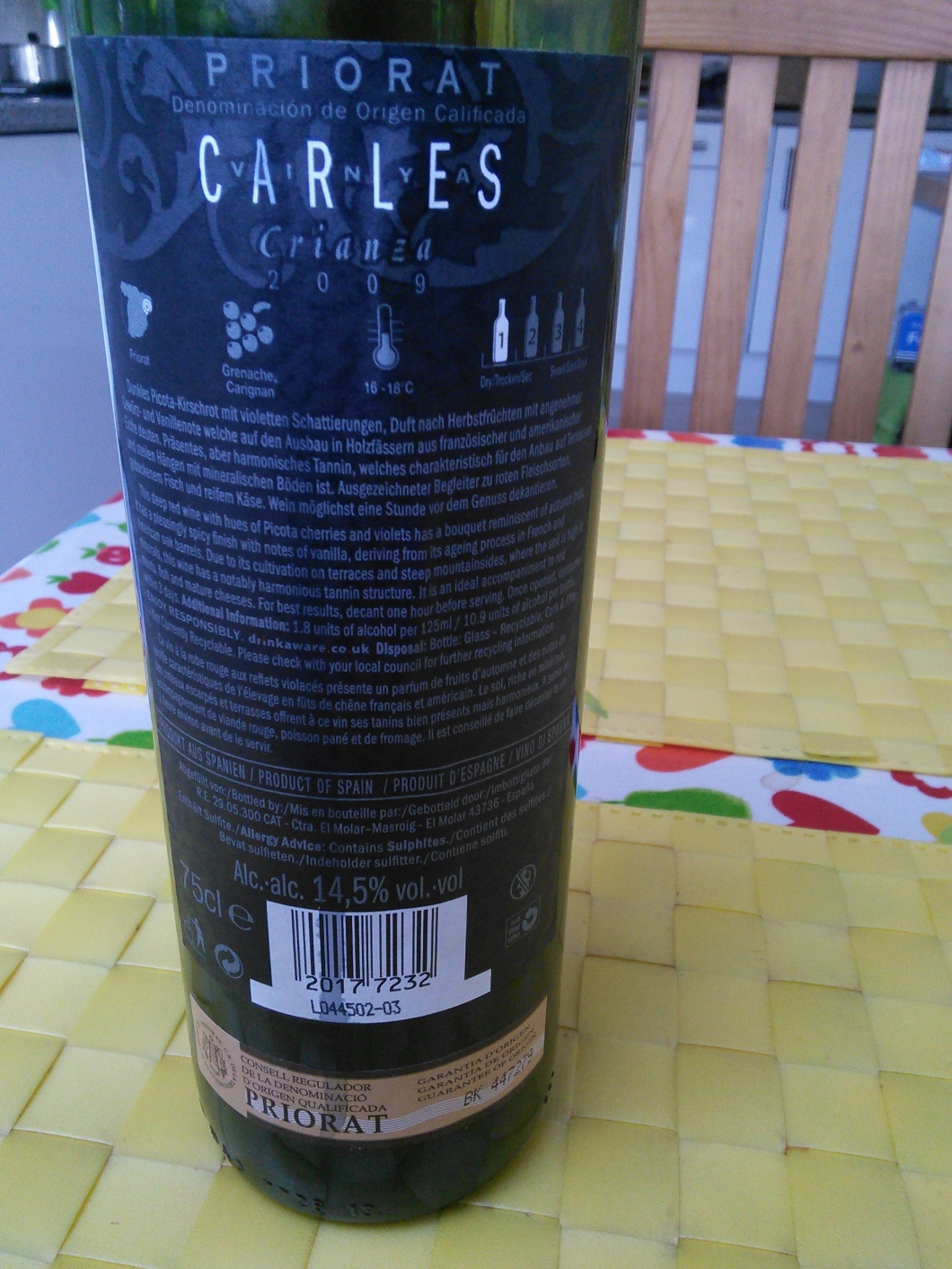 The grapes used in priorat wines are Granacha (Granache) and\or Carinena (Carignan), with this wine being a blend of the two.

Classic priorat wines, due to the low yields are normally powerful, dark brooding beasts – the Heathcliffs of the wine world – with a sort of mineral quality to them due to the unique soil in the area called llicorella. They also lack the oakiness so common in many Spanish red wines This one wasn’t a classic Priorat by any stretch of the imagination being quite a restrained and placid beast. On the nose initially there were hints of cedar, which after being left for a while and aerated developed into a pleasant cigar box aroma.

On the palate it was again initially restrained, but developed into dark autumn fruits, particularly damsons. This wine was a perfectly drinkable Spanish red, if not really recognisable as a Priorat. It was surprisingly smooth for its 14.5° alcohol, but certainly benefited from being drunk with food and went well with a joint of roast beef. Definitely good value for its £5.99 price tag. 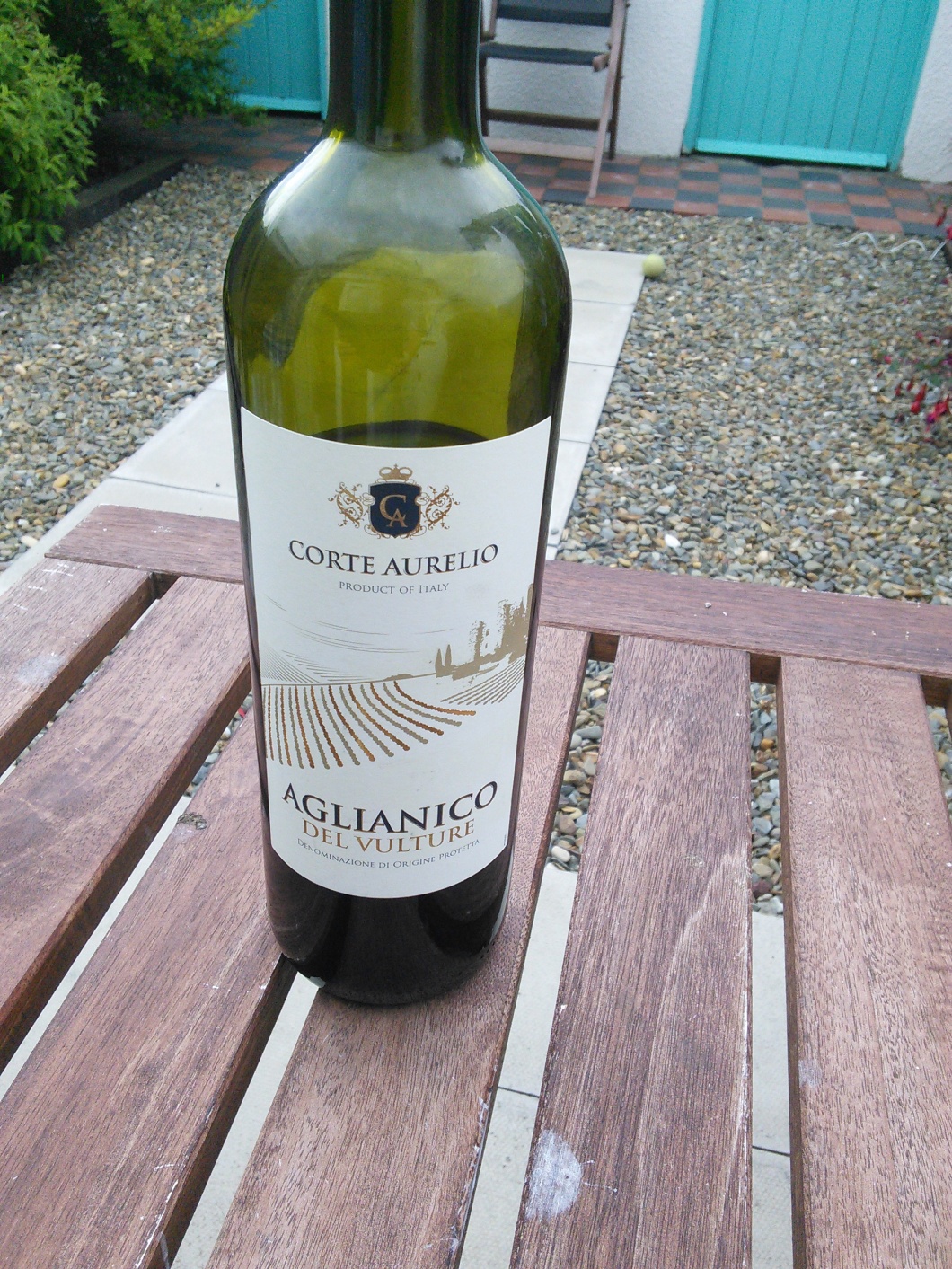 The Aglianico grape has been grown on the slopes of Mount Vulture (hence the name) in Basilicata (the in step of the heel of the Italian boot) since around 600BC and stuff that has been drunk for that long has to be quite good.

Despite it having been around for so long, it has only recently started to appear on the high street in the UK. Where it does it is generally good value for money and so it was with this wine.

On the nose there was dark berries and a hint of spice . 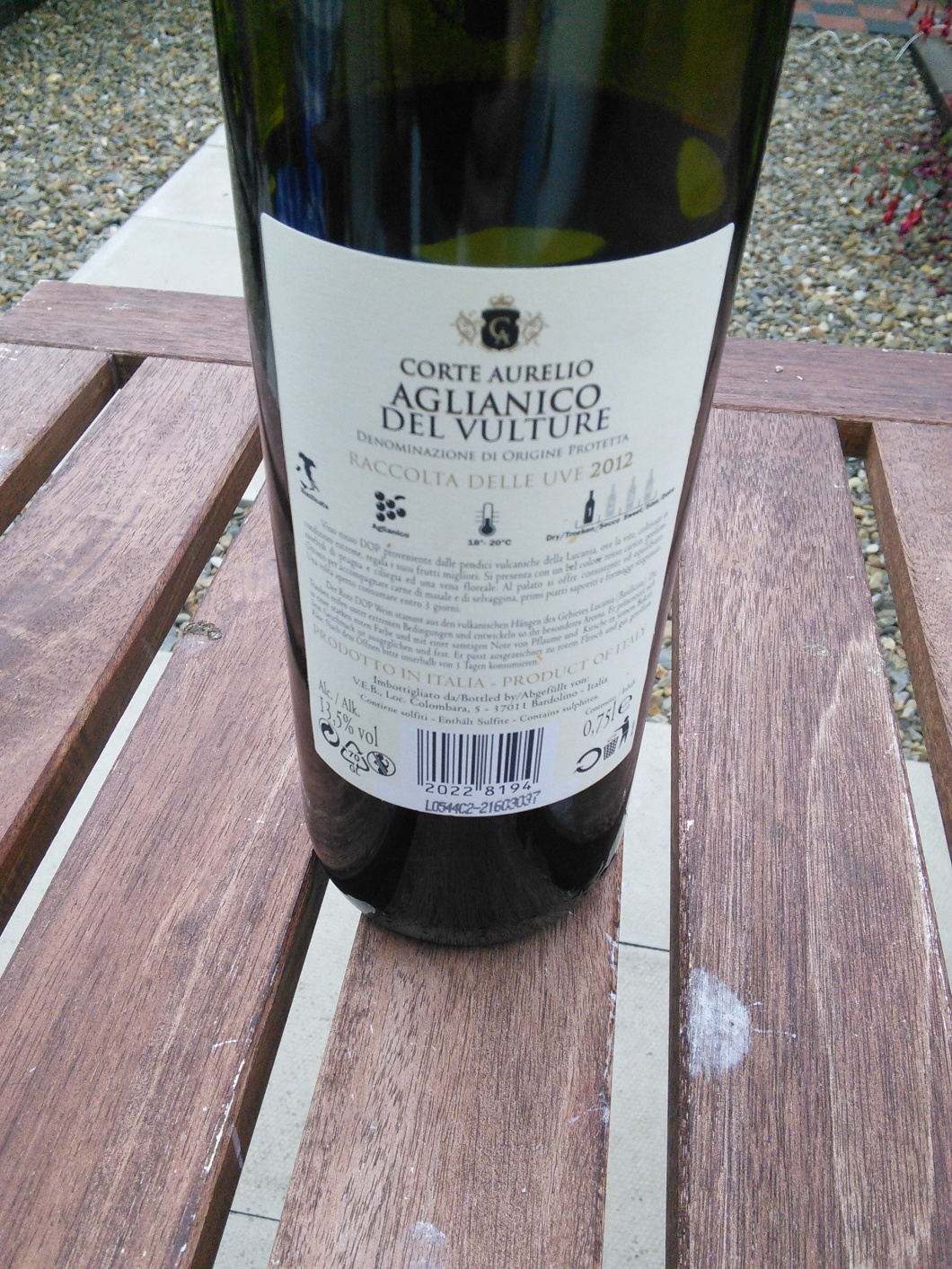 The predominate taste on the palate was of blackcurrant, with that nice dash of fresh acidity that come with that fruit. It did need a bit of time to develop and certainly would benefit from being decanted/ aerated before drinking.

Agianico wines can be quite tannin heavy (the stuff that draws the lips back over your teeth) in their youth but there was no evidence of this in this wine. Despite its relative youth (2012), it was a nice easy drinking wine (but best drunk with food) which was excellent value for its £5.99 price tag.

I was quite skeptical about the likely quality of all three of these wines and was therefore pleasantly surprised when I found I quite liked all three of them. They were all good wines which, whilst not stellar, were very good value for their £5.99 price tag. All in all a “Lidl” wine does indeed go a long way. Sorry couldn’t resist the pun, but it was actually true here.

Would I buy again? Yes I would definitely buy any of these wines again, but if I could only buy one again it would be the Aglianico.

The empty bottles in the picture below are testimony to the fact that Mrs. SF and I enjoyed these wines. If we do not like a wine it will remain undrunk (I am not one for grinning and bearing it) in the bottle and then poured down the sink (unless there is a fault in which case I always take it back to the retailer). These wines were, however, all happily poured into Mrs. SF and I (well mainly me).