Spice up your lunchtime – a couple of spice driven options to “take back to you desk” in Cardiff City Centre.

Sarnies have been for many a year the staple of the majority of people’s working day lunches in the UK. Whilst we have progressed (not sure it is progress at all) from going home for lunch for a proper meal (even before my child chimney sweeping days that) to bringing our own home made sarnies into work and on to buying them pre – packed, I personally very rarely have a sarnie for lunch.

I like to be a bit more adventurous of a lunch time and whilst I very much enjoy a sit down meal at the likes of Asador 44, time, waistline and money prohibit this from being a too regular occurrence.

I am always keen to “spice up” my lunch time in work as a dreary sarnies is somewhat boring and the canteen food on offer can be “interesting” (not in a good way) and increasingly no cheaper than town.

Getting out of the office and away from my desk and accursed PC (as often as work commitments permit) is a must for maintaining a semblance of sanity.

Cardiff city centre has a number of rather fine places that allow me to do just that for lunch within an easy walk from my office.

Below are a couple of new places (at least to me), on top of the existing 3Bs Cafe (shortly to re-open in new digs on corner of the High St. and High St. Arcade), Thai Asian Delish (in Cardiff’s indoor market), Makasih (at Sticky Fingers) and Wo-ker Shaker (on Tudor Street), that offer a bit of spice at lunchtime.

The re-invention of Cardiff’s indoor market as a food hub continues apace, with the latest outlet specialising in Malay cuisine (although the ladies who run it seem to be Thai).

I think the sign is somewhat misleading and possibly a throw back to the previous incumbents as this place has more of a Malay focus (albeit with a bit of Indian on the side).

Malay food, to my mind, is one of the world’s great examples of successful (rather than for the sake of it) fusion food with its mix of indigenous Malay and Chinese cuisines (nonya/nyonya), plus a good dollop of Indian sub continent thrown into the mix.

Any new lunchtime spot in town is of interest to me, with the added benefit here of it being located in Cardiff’s indoor market (where I get most of my weekly food – shopping local and often makes sense to me on both the value and quality counts).

On the food front the choice is based on a number of regular dishes, 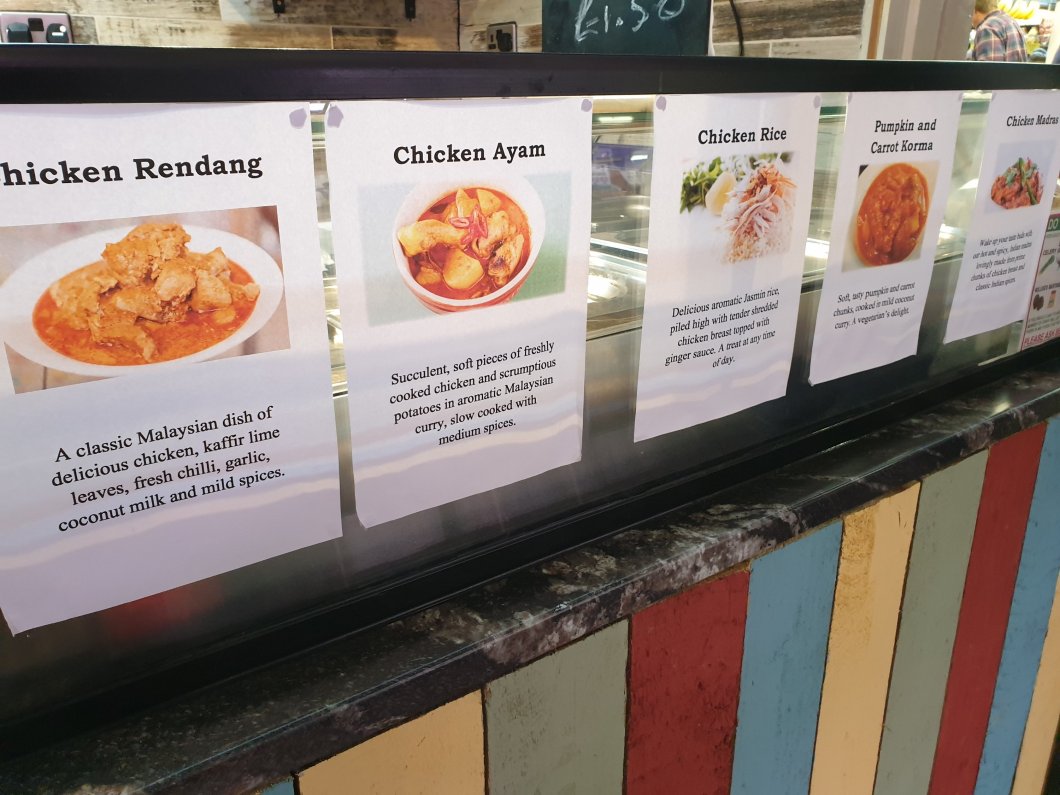 with both a Malay focus.

and an Indian twist 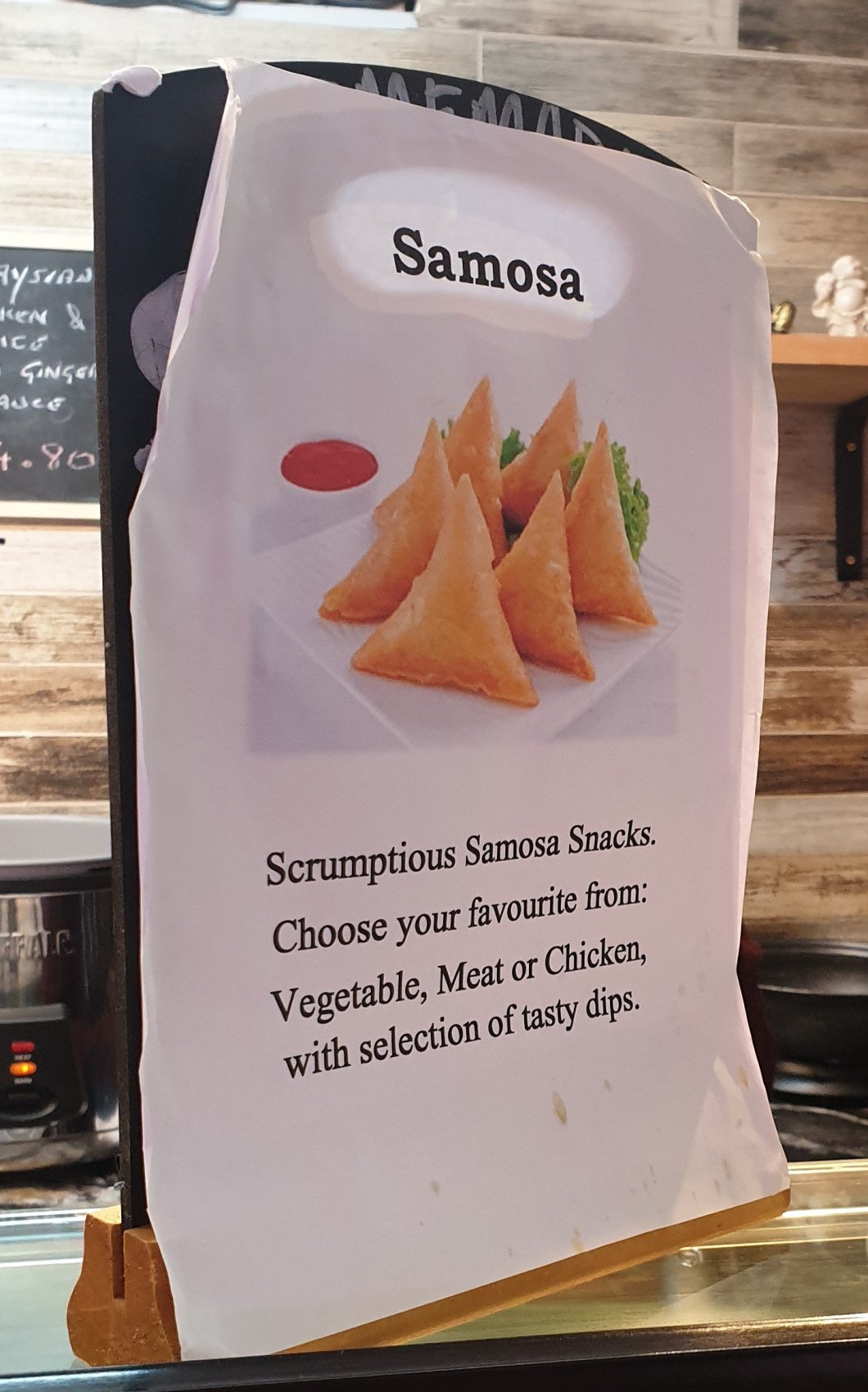 There are also some interesting specials on offer, 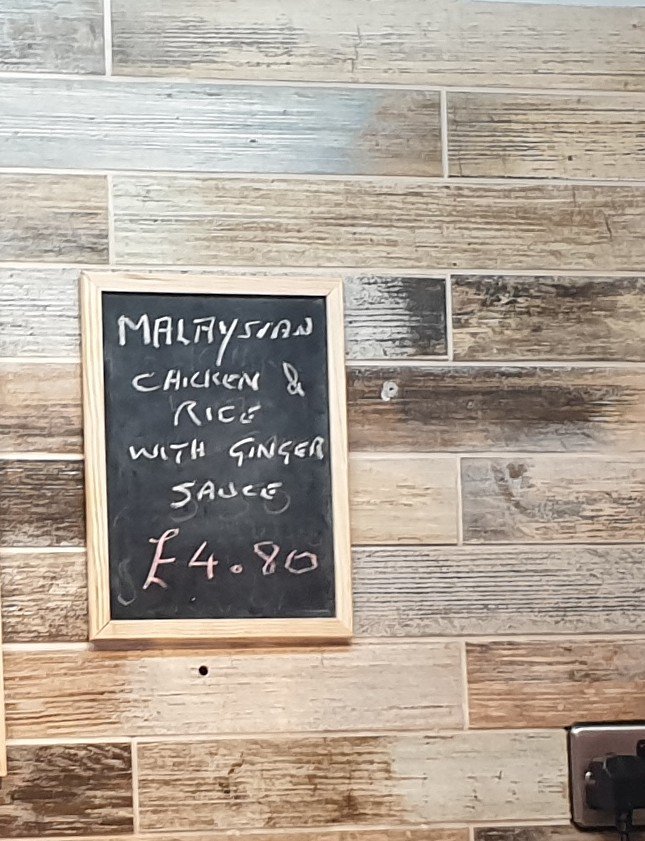 which all sound rather nice.

Not sure about the liberal use of “scrumptious” in the descriptions – not a word I hear much these days (makes me think of “Disney” English and I half expected Dick Van Dyke to pop up from behind the counter and break into song in a mockney accent, but who am I to talk as I regularly mangle the English language medium on this blog).

On a first visit I went for the chicken rendang (£4.50, rice included), with rendang (most notably beef) an ever present dish on any Malay restaurant’s menu.

Here it was a bit more sauce heavy than the versions of it I have had in Malaysia over the years. Those were much dryer, with the sauce reduced to almost a paste coating the meat.

Despite this seeming deviation from the “rendang” norm, the sauce itself was top notch.

Heady with coconut, lemongrass and kaffir lime leaf it had a lovely layering of flavours. It had heat, leaving a pleasant tingle on the lips, but nothing that blew my head off.

Spice rather than heat is the key to Malay food and this hit the spot nicely in terms of the level of spicing. The ladies who runs this place clearly knows their way around a spice box.

The plentiful meat element (they are not stingy with the portions here) had clearly been marinated in spices and had absorbs oodles of flavour. If I had one criticism it would be that the chicken used was breast meat and with the long cooking I personally think thigh meat would be a better option.

The rice that came with my rendang was nicely cooked, with the grains separated and having a pleasing fluffy texture.

Together it made for a very fine and filling lunch

For a quick snack on the run, their super crisp and very meaty (beef or chicken – they do veggie ones too) samosas (£1.50, with a choice of dips, for 3) take some beating, 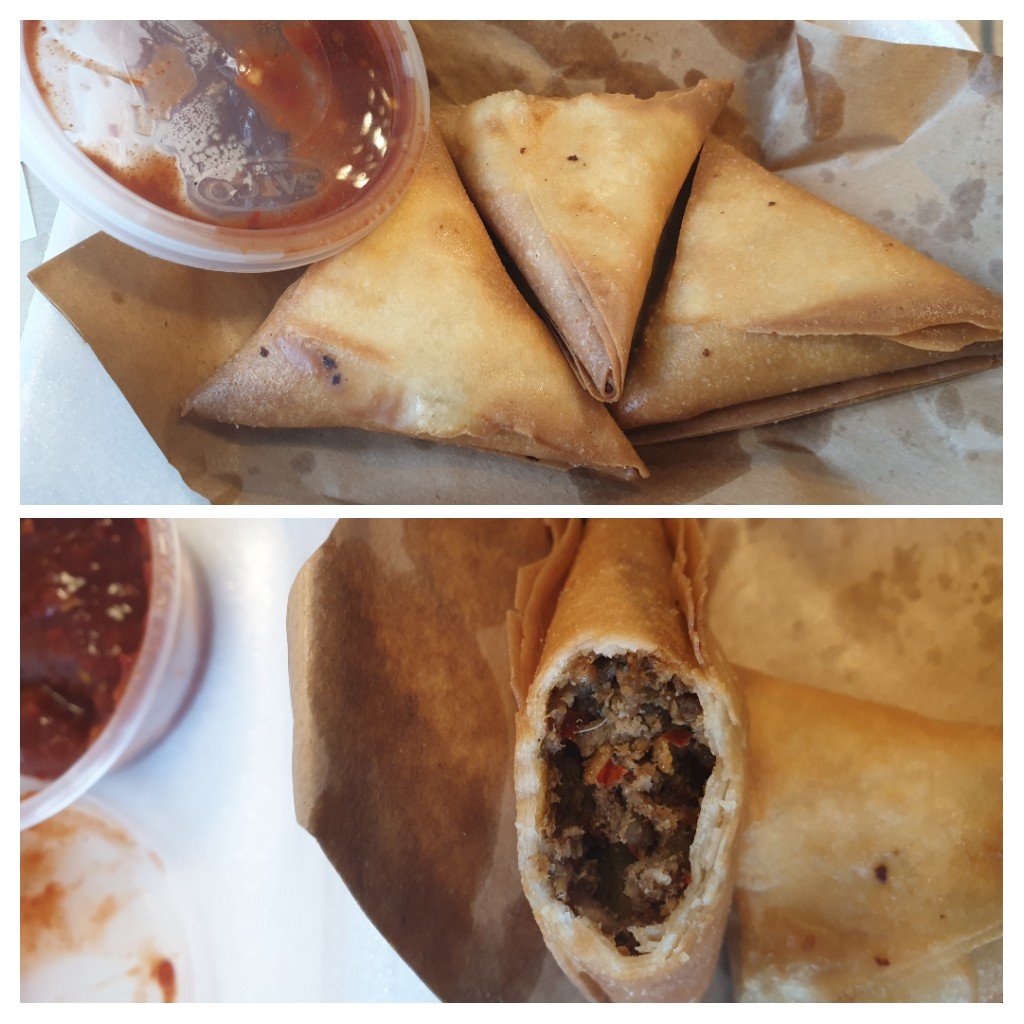 especially if you go for the quite fiery (very moreish, if a bit “Johnny Cash” later on) chilli sambal accompaniment.

Way better than my normal lunch time fare that’s for sure, but I know some people will rile (already have) against it all being served up in a somewhat environmentally unfriendly polystyrene container (serving food and/or eating out of one is, it seems, about as socially acceptable as tucking into a Vaquita steak or BBQing – on a gas one 😱, unforgivable regardless of the environment – Greta Thunberg).

I can’t say I have really thought that much about the eco sins of takeaway food containers (I have very few takeaways, so don’t consider myself much of a sinner on that front at least), but bought in my own tupperware (plastic, but not single use) container on a subsequent visit to this place and they were happy to put the chicken ayam (£4.50) I ordered directly into it. Reckon I got more – so winner, winner 😁

As they say, every little helps (in making me just that little bit fatter – used my own fork too which I assume allows me to buff up my rather tarnished eco halo just a bit 🙄). Apart from anything else, less packaging being needed means less costs for the business. On this basis, bringing your own tupperware helps the business too.

Back to the food, it is not often you see big chunks of lemon grass, star anise and pandan leaf in your lunchtime “eat at your desk” meal (at least not in my World).

Very tasty stuff on offer at this place.

Any chance ladies of you doing a roti canai (seriously need someone to do a good one in Cardiff)?

Until recently I had thought this place on the High Street was a strictly sit down affair. Wandering past it in the April sunshine, however, I notice a poster in the window for takeaway lunch boxes. 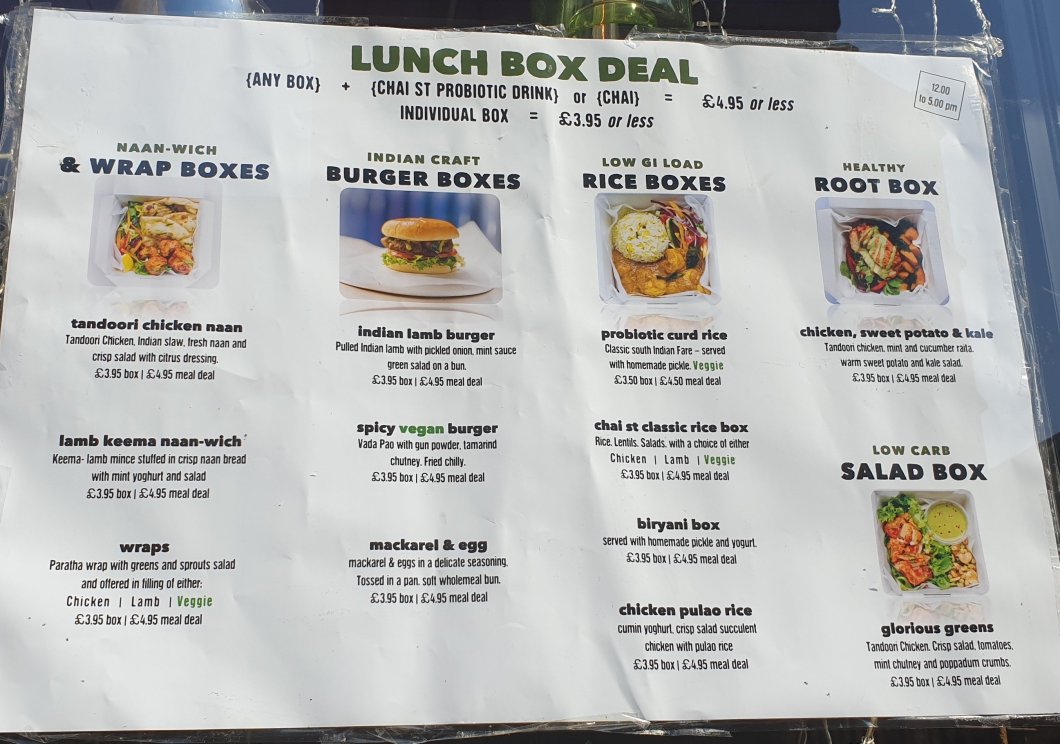 which is quite a leap (close to Venezuelan inflation rates) but still pretty good value I think.

My first foray bought me a boxed up keema lamb naan-wich (bought at the £3.95 price), which was nicely spiced with a pleasing lip lingering heat to it.

Whilst the dish wasn’t much of a looker, keema never is, the naan had a crisp crust on the bottom and a light interior with a slight chew to it. Perfect as a vehicle for conveying the keema curry to the gob. A nicely dressed side salad was the cherry on the cake

It was a good size and perfect for lunch. Sod the supermarket sarnies – “dhal” up the flavour with a naan-wich I say.

On a subsequent visit, a chicken biryani (at the new £4.99 price) was equally as good and very filling (didn’t need dinner that day).

Nice spicing to it, with decent sized chunks of chicken, fluffy rice and a cooling yoghurt sauce.

I have heard tell the lamb burgers are very good, but haven’t got around to trying one yet.

On the “take back to your desk” lunch front, both the Masala Hut (surely due a name change – “Take home and Malay” perhaps 😁 or, less puntastic, the Malay word for delicious which is Lazat) and Chai Street offer something a bit different to the boring old lunchtime sarnie. They also both passed (admirably) the retained heat test, with the food still hot after the 10 odd min. walk back to the office.

Add these two places to the likes of Thai Asian Delish , the 3Bs Cafe (when the new location is up and running), Makasih and (the slightly more further afield) Wok-er Shaker and you certainly have plenty of options if you want to spice up your lunchtime in Cardiff city centre.

Would I to back? Absolutely. Both places offer good value, flavour packed, lunch time fare and that always floats my boat. Both well worth a try in my opinion.