In my youth (many, many, many years ago), one of my grandparents’ favourite ports of call for a celebration meal was a Berni Inn.

These, for those too young to remember, were a chain of steak houses which were very popular in the 60s and 70s. Berni’s staple offering was prawn cocktail, whitebait or pâté to start, followed by a steak which required a seriously evil looking knife to cut (with half a grilled tomato and a mushroom and chips) and then finishing off with a black forest gateau or sherry trifle (with obligatory synthetic cream tasting like shaving foam).

All of this was washed down (probably) with a pint of Watney’s Red Barrel or, if you were feeling fancy, a bottle of red wine (vinegar).

My grandparents loved them, my parents loathed them. I was too young to really care.

Since those long distant days, sadly my grandparents are gone and (not so sadly) so are Berni Inns as a chain. Steak houses are much more sophisticated these days with the likes of Hawksmoor (please come to Cardiff) and Goodmans in London cooking good quality meat properly (all you need to do steak wise).

It is hotly disputed between me and my friend, Rachel, as to which is best. I am in the Hawksmoor camp, she the Goodmans. As, however, she likes her fillet steak (only cut she will order and the most boring in my opinion) cooked medium to well done (i.e. ruined) I think her views should be discounted in their entirety when it comes to steak. I have told her she may as well be eating a shoe and the chef is probably weeping, at the waste of good meat, each time her order to nuke it comes in.

Cardiff is perhaps a little bit behind the curve in terms of embracing the vogue for steak houses (I am discounting the likes of Charlestons, where I have only ever been when I was too drunk to see, like alone taste, the food), but we do now have Pier 64 in Penarth and in the City centre, amongst others, Steak of the Art and Miller & Carter.

Having already blogged about Steak of the Art, Miller & Carter (“M&C”) was the chosen venue for a lads work day lunch (having been blown out by J for the umpteenth time the week in question), with its offering of a one course (£7.95) or two course “fixed” price (£10.95) daytime menu. 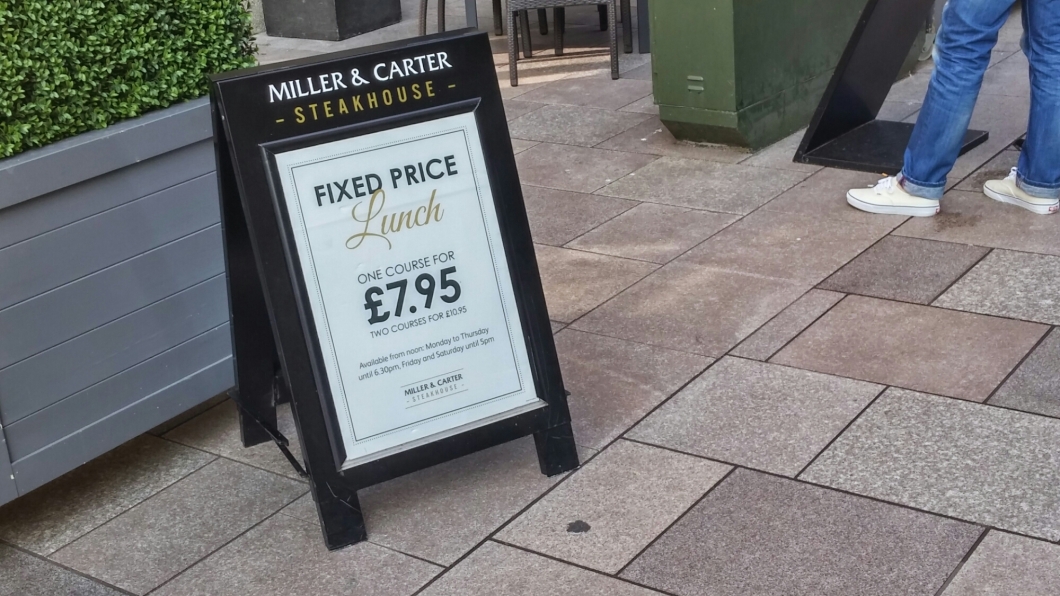 More on the not so fixed nature of this later.

Well it is a big old unit that is for sure, sitting in the whole of the ground floor of what use to be the Habitat on the Hayes (plus a mezzaine floor).

Inside, it is quite American steak house. Banquettes, booths stripped brickwork – that sort of thing. Quite nice I thought.

The prices on the al a carte being a bit rich for our blood (for a week day lunch at least),

we all ordered from the limited fix price menu (available Mon – Thurs. noon til. 6.30pm and Fri.and Sat. noon til 5pm).

One of us had a starter (not me). This was a small and rather depressing looking mushroom and cheese dish – with some unhappy looking and distinctly ungarlicy garlic bread. 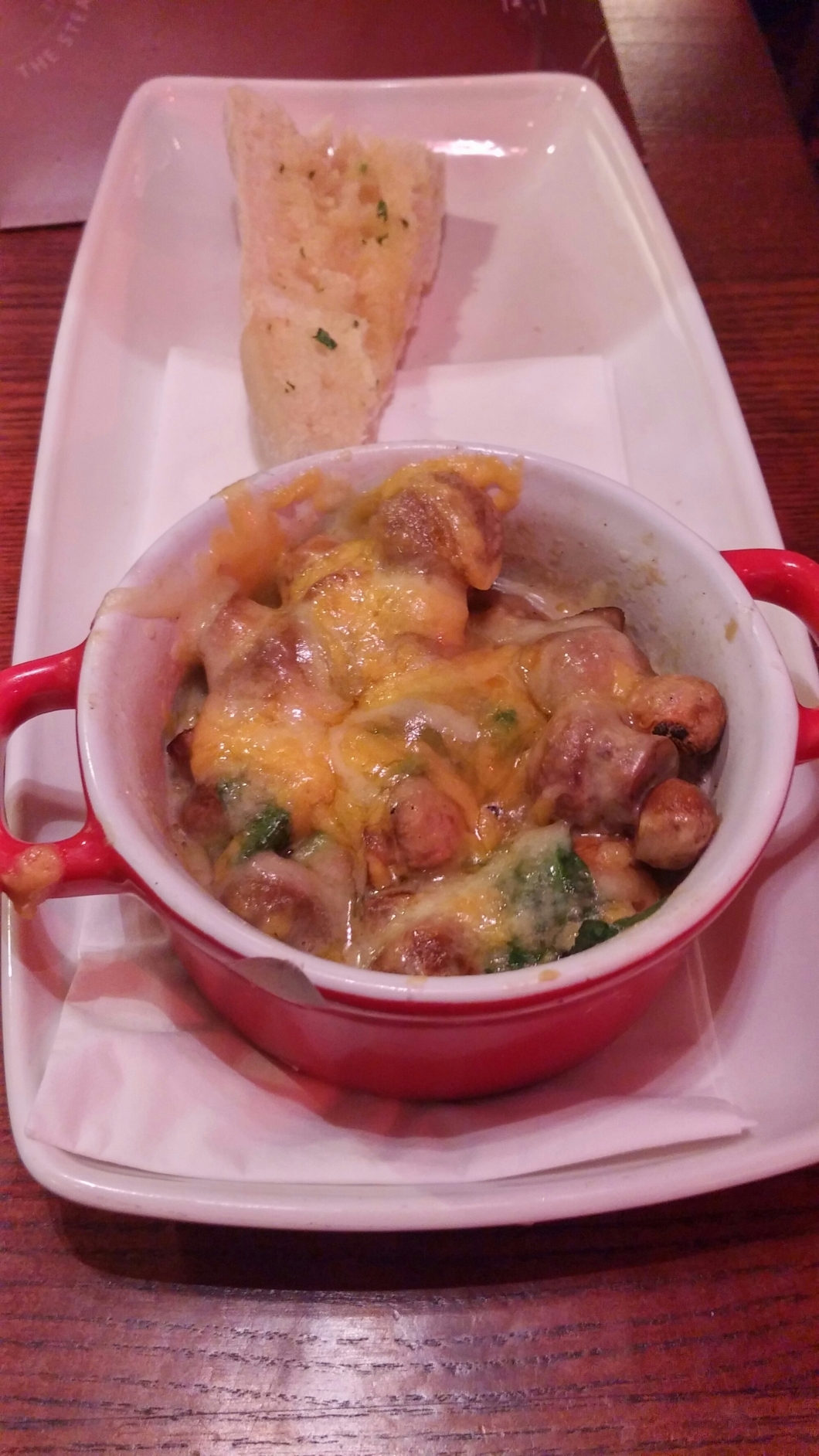 Nice touch, the big chip on the side of the pot!

The person who ordered it said it was alright in a half hearty way and admitted he wished he had passed on a starter, like the rest of us. It looked very oily to me.

In terms of mains, as the place’s strapline is “For the love of steak”, I was only ever going to have the steak, with the only steak on the “fixed” price menu being “steak frites”.

Very annoyingly, this had attached to it a £2 supplement. I have moaned about this (which I regard as sharp) practice in the past (see the post on the otherwise good Côte) and cannot for the life of me see how a minute steak can validly attract a 25% plus supplement, when on the same menu neither a sea bass fillet nor a lobster club sandwich do! Just because it is a steak does not mean you can automatically bump up the price.

The fact that M&C sells itself as a steak house compounds the sin (in my eyes) as they are bumping up the price of their stock in trade dish. I don’t like it and it is unnecessary when you look at the base cost of other dishes on the menu that lack a supplement.

Moan on pricing over and on to what the food was actually like.

I asked for my minute steak (rump according to the waitress on asking – it looked more like a bavette to me) to be cooked rare and it came cooked a little over for my taste. It also looked a bit insipid – having grill marks, but being strangely pale in colour. It looked, dare I say it, “unloved” and from the colour and grill strips it could quite possibly have been subject to a degree of pre-cooking.

Whilst it had a good flavour to it, the fact that it was a bit overcooked (as against what I asked for) is not great for a steak restaurant. Seasoning wise, I love a fair whack of salt and it was ok for me but I imagine it would have been regarded by some as overly salty. Niggles rather than send back issues, but niggles none the less.

My frites were perfectly nice (portion wise amount of frites was a little on the mean size I thought), but the balsamic glazed tomato and salad garnish were very sad looking indeed. No dressing on the miniscule limp salad garnish (honestly why did they bother) and no evidence of the promised balsamic glaze on the tasteless quarter tomato.

I ate it and it was OK, but nothing more.

As for the others chaps, they had the sea bass, gammon, and the grilled chicken breast respectively.

The sea bass was a little on the small size and came with some strangely gloopy mashed potato (and some ok French beans). The bass was, however, said by the person who had it to have a good flavour and a nice crispy skin. All in all a well cooked bit of fish they thought. 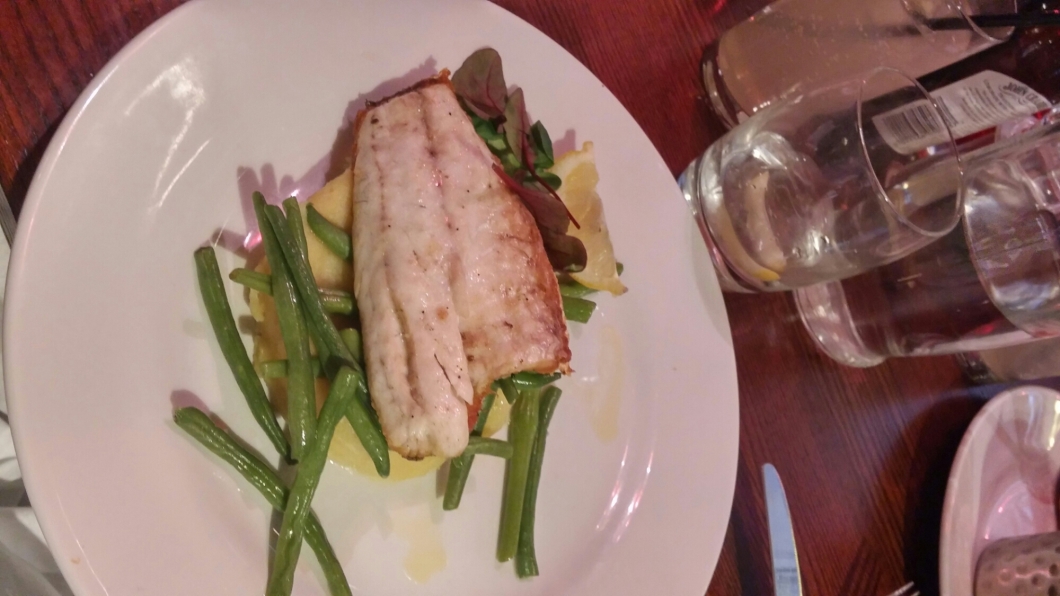 The gammon, egg and chips looked very pub grub/Wetherspoons to me, but was pronounced as nice by the person who had it.

The chicken with crushed new potatoes and french beans was the biggest portion of the lot and was also deemed nice, if a little bit uninspiring.

Work day lunch meant no booze and to be honest nothing really took my fancy on a fairly dull wine list.

Care is needed in choosing from this list, as some of the mark ups are on the high side (Cartlidge & Brown, Pinot Noir – 300% plus over retail price) whereas other are much more reasonable (Aruma Malbec – only just over 100%). The malbecs/malbec blends on the list (malbec is a good wine for steak) look the best value.

Soft drink wise they have a pretty wide selection, including so called softails.

Mocktail I get, but softail just sounds silly.

The one I had was a virgin mojito (£2.50), which was a bit sweet for my tastes but otherwise ok.

Others had bottled lemonade or ginger beer.

My steak was alright, but just that. It is also disappointing that, whilst tasty enough, it was cooked a tad over how I asked it to be cooked. I would expect a steak house to be bang on in terms of cooking a steak to a diner’s stated preference. It seems their love of steak may not extend to the poor relative in the form of daytime “minute” steak. To me, it certainly didn’t justify the 25%+ supplement on the “fixed ” price menu.

So was it better than the Berni Inns of old? Yes, but not half as much as I was expecting or would have liked. I wonder if Berni Inns had survived, whether this place is what they would have turned out like?

To be fair the al a carte dishes delivered to other tables looked quite good, but the fixed price option was all a bit uninspiring. Perhaps all the “love” is showered on the al a carte steaks.

The damage was just over £45 (without tip). OK value, but again not fantastic for the quality of what we got.

Would I go back? Probably not. To be honest it was a bit pub chain grub (or later day Berni?) rather than premium steak house to me. Whilst it was a fixed price menu and the price has to be taken into account, overall it was all a bit disappointing.

In my view there are better fixed price lunch options in Cardiff city centre – with Côte, Casanova and the Potted Pig springing to mind.

As for direct competitors, I thought the minute steak at Steak of the Art was better.