Every Monday at 10am and then at 6pm there is a (gold) rush for the much praised burger kits of Hills in Brecon. I have tried on numerous Mondays (with my finger hovering over the order button constantly refreshing the webpage) to get an order in and have failed miserable. Each time I am seemingly not quick enough by a picosecond as the “coming soon” button changes to “sold out” without any visible shift to “order now”.

I then got as far as putting my card details in only to make the fatal error of not knowing off by heart by card’s security number. That picosecond of hesitation resulted in me missing the boat yet again with a “the item in your basket has sold out” popping up, followed by a “for fxck’s sake” from me!

I, however, struck gold on my last attempt and hit the motherlode with a order finally accepted – cue me being bathed in a golden beam of Celestial light and a heavenly choir blasting forth the Hallelujah Chorus.

I think it has got easier over the weeks to get an order in, so my fist pumping celebration was probably a tad OTT and certainly don’t be put off trying by my failures.

I went small(ish), with the £18 (plus delivery) option, with that providing all the stuff for two, two pattie, bacon cheeseburgers.

The email confirming the order came with a link to the cooking instructions, which all looked pretty simple (famous last words)

It all arrived, nicely packed up, on a Friday afternoon.

Couldn’t find the advertised onions (in beef dripping and bone marrow – did sound rather nice though) or the parmesan (to add to the bacon) in the box. I did double check (wasn’t that bothered to be honest), but seemed to have been giving gherkins instead (not a bad trade in my view as I rather like a gherkin in a burger).

Update: It seems my pack was never intended to include onions or parmesan, with it having been changed to gherkins for the week of my order. It appears I had picked up, off the website, details of the previous week’s burger hence the confusion on my part. Happy to have been corrected on this.

First task, pre – cooking, was to divide the beef (nice fat to lean ratio with the blend here) into four separate balls (not overworking them) and pop them in the fridge.

After a couple of hours in the fridge they came out to warm up to room temperature and I set to work on the bacon (which I forgot all about in final construction).

Next up was the main event – the patties, which are smashed (good tip from them here to use grease proof paper), with plenty of seasoning and minimal cooking time ( 90 seconds each side).

The smashing gave them a good gnarly crust, with nice carmelisation.

Once flipped and cooked on both sides, construction began, with the American cheese and Monteray Jack slices added to each pattie and the top bun cap put on. A lid was then put on the pan until the cheese melted. 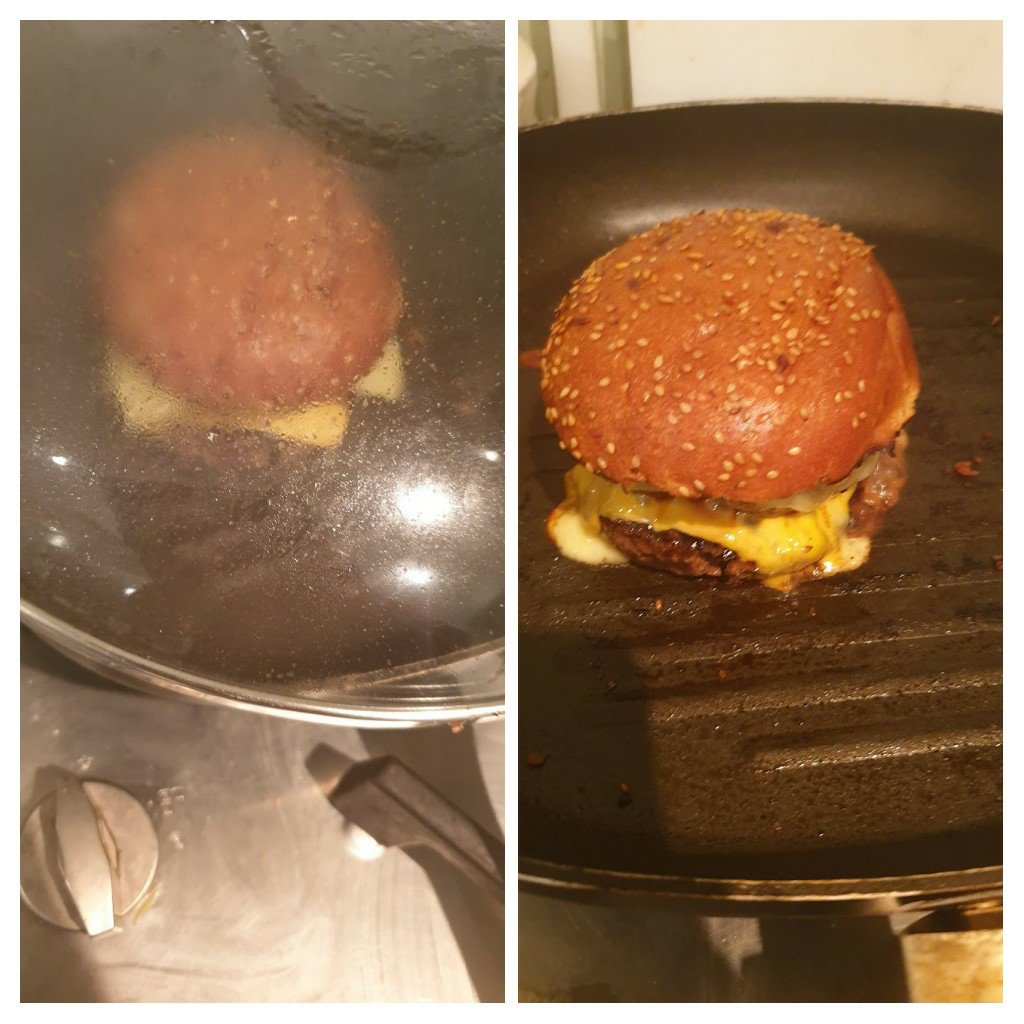 I could have probably left it a touch longer in the pan to get max. cheese oozeness, but I wanted my patties the right side of medium rare so erred on the side of caution.

Whilst this was going on I finished the bottom layer, with the house sauce and plentiful gherkin slices (very partial to a gherkin me).

Have to say, I was rather pleased with the look of the end product.

Aesthetics are all well and good though, with a beautifully pink interior (Mrs. SF’s much more delicately cut, with a knife, than my bite effort),

but the real test is how good it tastes.

On that front it passed with flying colours. Lovely loose texture to the patties, which were really juicy and had the innate beefiness that only comes from, properly dry aged, quality beef.

The pickles and house sauce added a nice sharpness to the proceedings, that operated as a pleasing counterpoint to the richness of the beef and gooey cheese.

The bun (Alex Gooch) itself had a light texture, but enough structural integrity to hold together right until the last bite (despite the copious amounts of fatty burger juice it had to absorb – with my beard taking up the slack).

As I mentioned earlier,  I forgot the bacon –  leaving it in the oven whilst the somewhat frenetic cooking of the patties and construction was underway. I am sure this would have added another layer of flavour (it was very good bacon – which I ate solo after I had eaten my burger and realised the bacon was still in the oven albeit I had remember to turn it off so the rashers were still edible as opposed to frazzles), but I actually think the best burger is an unadorned cheese burger (can’t being doing with whacky/500 bazillion toppings) so I wasn’t too devastated by my bacon omission.

Wine wise, I think claret is a good match for a cheeseburger and I finished off a flight of Chateau Sociando Mallet wines (1995 – 2016, as you do) 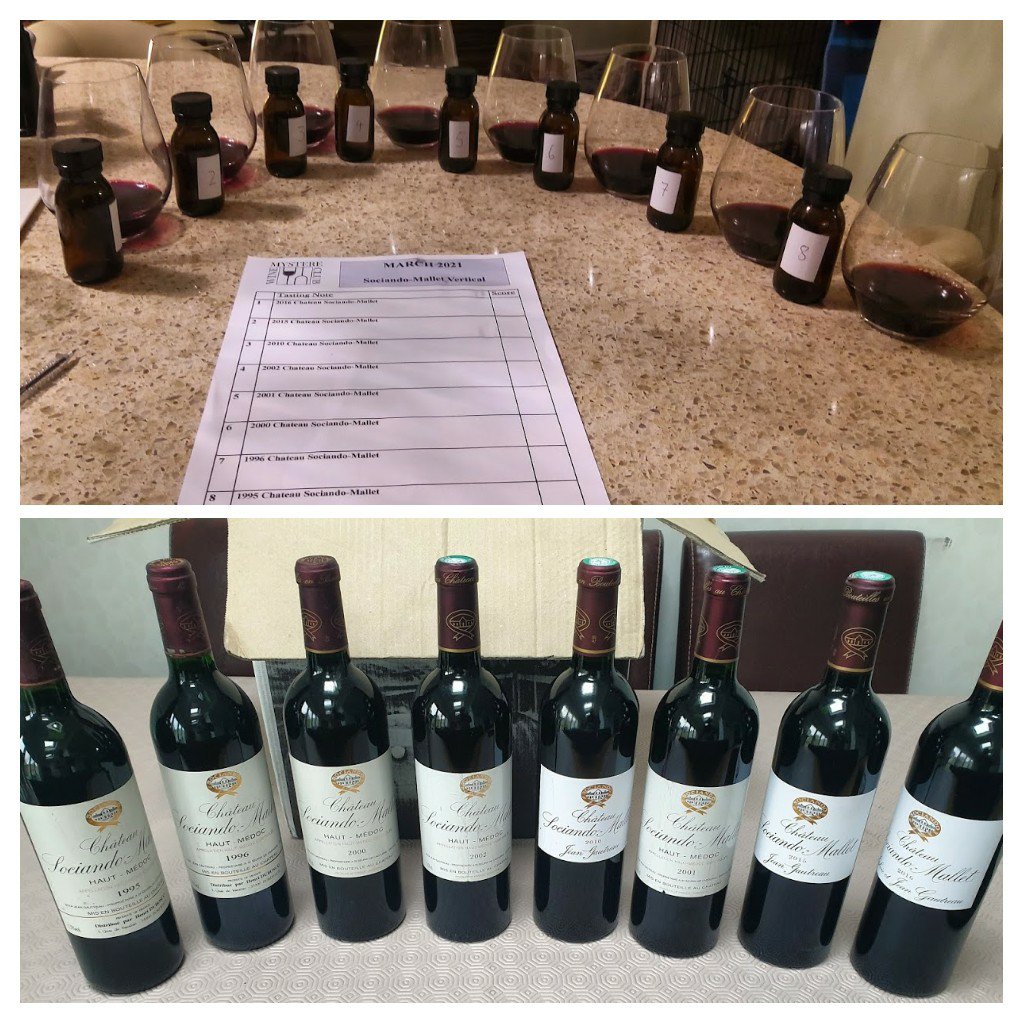 These are great food wines and worked a treat with the beef, cheese and bread combo. The 1996 and the 2000 (both glorious) were particularly good with this burger.

A little more affordable, a good crianza or reserva rioja would work well. This Costco own brand rioja (an absolute steal at a mere £7.18 inc VAT a bottle)

would have also worked quite well.

Really good burger this, up there with the best I have had (both home and away) and on a par with the impressive Burger and Beyond DIY number I reviewed a few weeks back.

Would I order again? Absolutely, classy burger this and I will certainly try to get up to their gaff in Brecon when hosoitality is finally given the green (gawd knows when that will be based on tbe current dithering), so they can do the cooking.

Price wise it was £18 for the two (4 patty) pack, but to that you have to add a rather hefty £7 delivery charge. Not sure how these charges are worked out, as I have seen them range from free over a certain amount (Burger and Beyond) to £4.50 (the Passyunk Avenue Cheesesteak and Wings bundle I reviewed last week)and then up to £15 (some of the top end places).

I suspect there is a standard fee for London and another for elsewhere, but it is odd that it is less to deliver over 133 miles (nigh on 3 hour drive) from central London to Cardiff than for the 33 miles (58 min drive) from Brecon to Cardiff 🤔.

Order direct from their website (Hills at home tab)