Stars of the Loire? Chenin Blanc tasting with the Mystere Wine Club, Cardiff.

Despite the pandemic, the Mystere Wine Club in Cardiff is still going strong. It pivoted rather effortlessly from in person tastings to online ones and for this the younger members of club committee (of which I am not one – being on the committee, but far from young), who have done such a sterling job in keeping the Club tastings going, deserves a pat on the back.

The later months of 2020 brought some fasinating tastings, including a  intriguing one of the much underrated and very versatile grape that is Chenin Blanc.

Its naturally high acidity makes it a grape capable of being used across the spectrum from bone dry sparkling wines (such as Saumur Brut) to sweet wines (such as Quarts de Chaume) and pretty much everything in between.

Whilst it is grown extensively outside of France, most notably in South Africa (the biggest producer of chenin blanc, where it is known as stein), to me and many others its spiritual home is the Loire Valley and all the wines for the tasting were from the Loire.

The tasting comprised of a mix of  secs, 2 demi-secs and finishing with 2 moelleux  (sweeties) – with a couple of real oldie (not as old as me mind) in the mix.

We were lucky to have Richard Ballantyne MW, who knows a thing or too about wine (including Loire wines), leading the virtual tasting.

So to the wines which were a intriguing spread of styles, age and price.

Very good start to proceeding with this wine, which had a light golden colour to it with a slight green tinge.

On the nose, there were aromas of tangerine, pineapple and then pear.

On the palate there was a high level of acidity which made this very refreshing (my notes referred to it as juicy) but also suggests it will age well (I have been told by someone much more knowledgeably than me that this should be drunk young and not aged, so maybe not) Nice hit of citrus lemon followed by more orange notes and a refreshing minerality as it developed on the palate.

Quality wine at a very nice price – bit of a bargain this. Think this would work rather well with some pan fried scallops.

Slightly richer colour to this wine, with more of a green tinge to it. 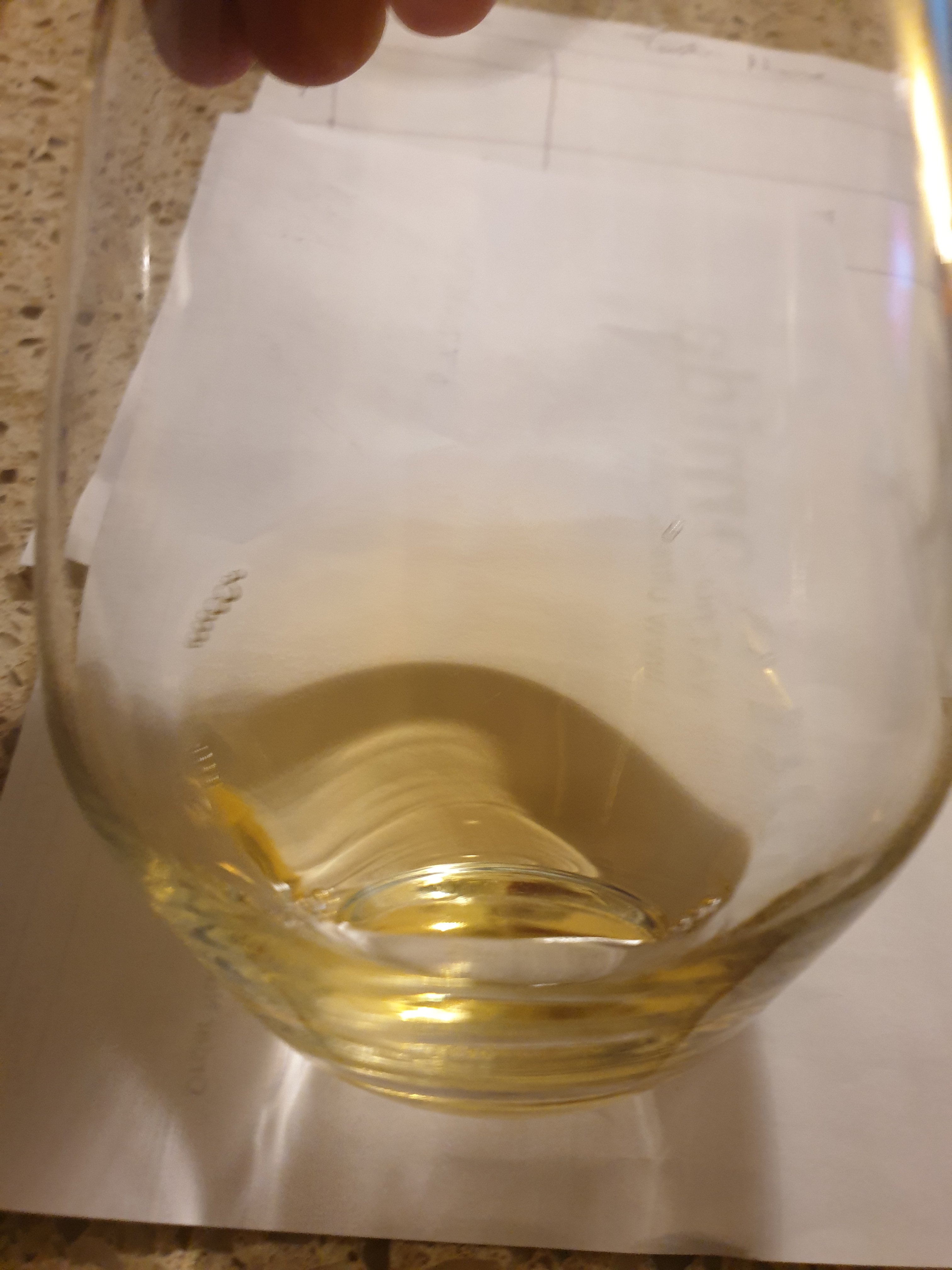 On the nose their were distinct notes of vanilla, followed by stone fruit.

On the palate I found it flatter than the first wine and less enjoyable. Touch of citrus, but the oak seemed to dominate with this wine.

To me a step down in class from wine 1, but still not bad for the price. Drink with smoked salmon or smoked trout.

Someone has commented that with age the oak in this wine will mellow, so one to lay diwn perhaps

Darker green hue to this wine compared to that of the first two. 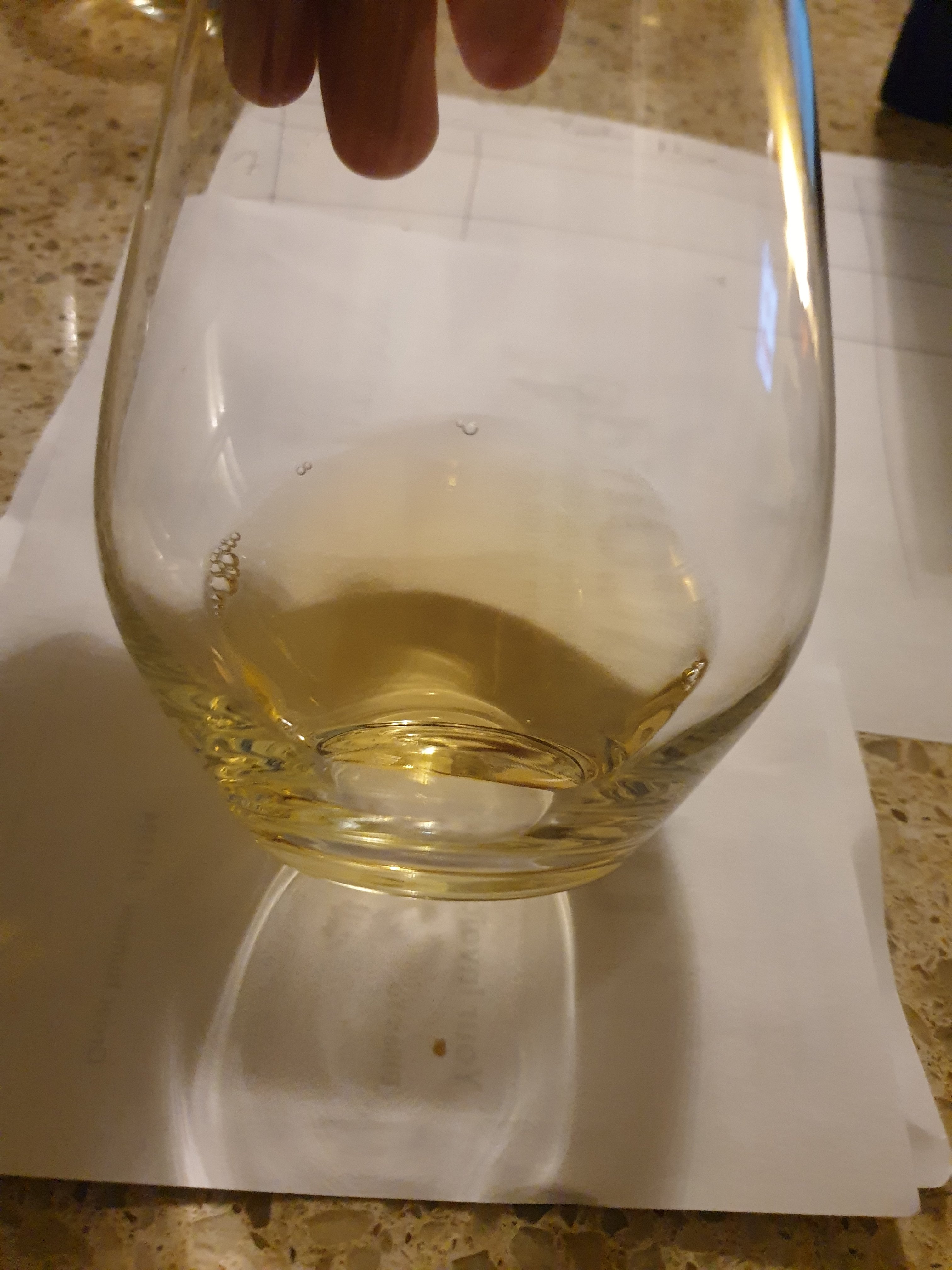 On the nose I got oak, then sharp bramley (cooking) apple and a citrus finish. Touch of perfumed minerality at the end perhaps.  To me the oak again was a bit dominate on the nose.

On the palate, I found this a touch sharp with very green apples. Needed food – scallops on black pudding would work I reckon. Not my favourite by some stretch.

Again I have been told the oak here will mellow with age.

Despite the 15 year age, the colour here was surprisingly light. Output after a bit of dehydration I would say!

Wasn’t keen on the nose of this, which was a bit too mouldy cider apple to me.

On the palate it was slightly better with a touch of perfumed quince in the mix, but still had mouldy apple in the core (excuse the pun). Easily my lowest scoring wine of the night.

Couldn’t find a price for this – no real loss as no intention of buying it.

The colour on this was much darker than those that proceeded it, a reflection of both its age and demi sec nature. 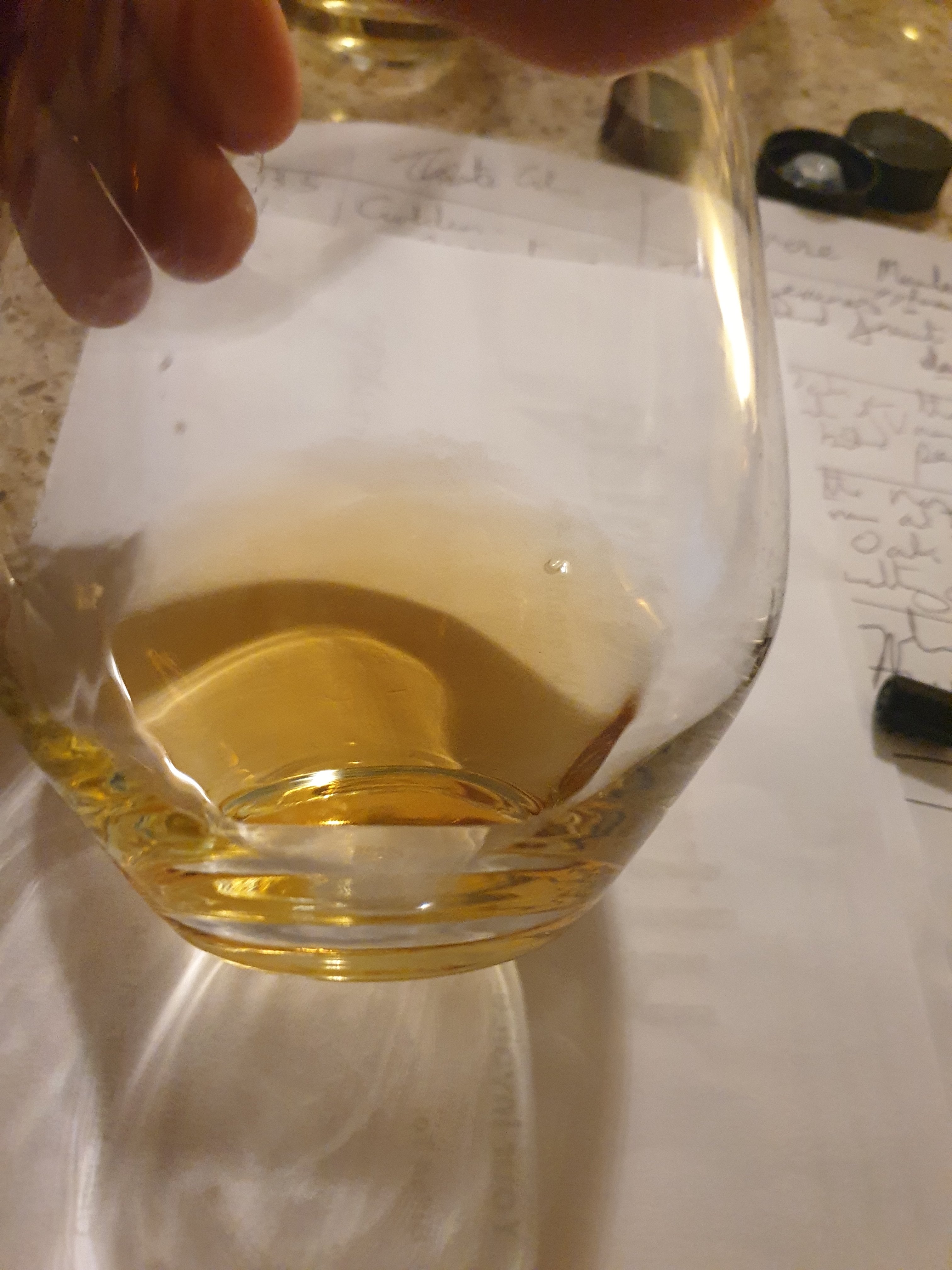 On the nose it had  lovely quince perfumed aromas followed by honey and then apple pie.

On the palate there were some gorgeous citrus notes that bought to mind Roses lime marmalade, as well as honey drenched quince, a touch of mushroomy earthiness and a subtle finish of anise.

Lovely wine this that scored highly and was my second placed wine on the night. I would pair this with charcuterie or a creamy blue cheese (Beauvale perhaps).

Now this is one of the reasons I so love the Mystere Wine Club. It gives me the chance to taste wines I would only otherwise dream of tasting. This wine is a case in point, as how often do you get to try a wine over 50 years old?  Not as old as me but not many things (non geological in nature) are!!

Lovely butterscotch colour to this wine,

with a nose of ripe sweet citrus (orange) fruit and bag loads of honey  followed by wafts of beeswax and ginger. Such an aromatic wine this.

On the palate it was still as fresh as a daisy, with tangerine, stone fruit,  honey and minerality in the mix.

Such an elegant wine, with huge length – lingering on the palate for an age. Frankly amazing wine considering it is over half a century old – if only I was holding up as well!!

Wine of the night for me (discounting price). I would (as with the last wine) pair this with a creamy blue cheese or, if you want to go slightly left field,  Peking duck.

The third best wine I tasted in 2020 and the best white.

A full on sweetie this wine, with the colour a touch darker than the Huet despite it being 21 years younger. 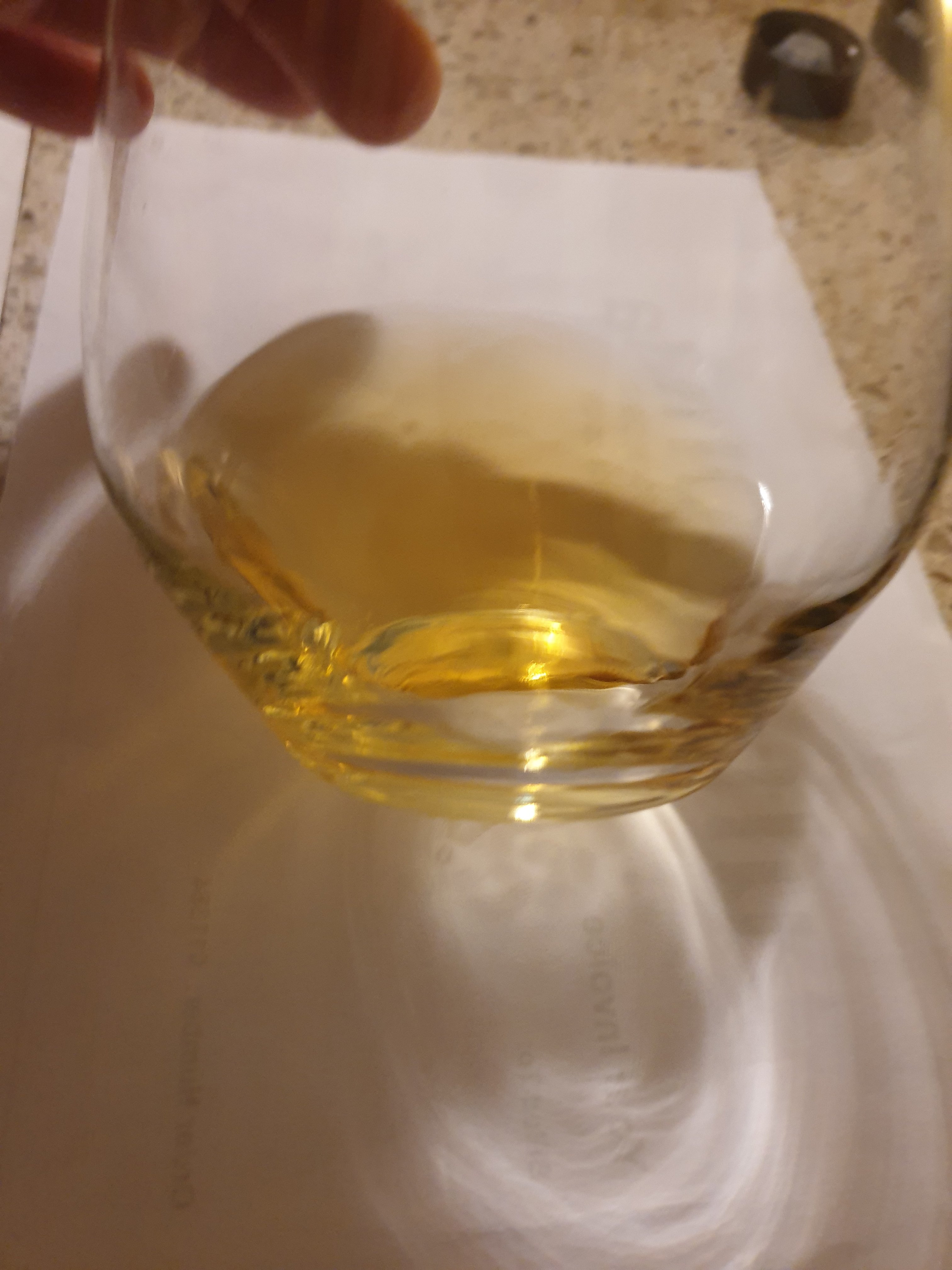 On the nose, I initially got a distinct nuttiness and then a touch of perfumed fruit. This, however, gave way to a not entirely pleasant mouldiness (not botrytis).

On the palate, I didn’t like this at all. It started off with too much honey and then felt tired, flat and musty and just odd to me, with no redeeming qualities. I though there may have been a fault with this wine, but I was the only one who thought that as it scored equally second on the night on vote of all the club members. Horses for course it seems and this fell at the first fence for me.

Darker again, this was verging on the amber in hue.

On the nose, there was caramel, a touch of nail varnish, wet wool and again a hint in the background of mushroom (but no mouldiness).

On the palate, this was really heavy with ginger spice, as well as a distinct nuttiness on the finish.  Very nice and score 4th for me on the night (with an equal score to wine number 1).

I would pair this with cheese (sharp blue or a goats cheese) or foie.

Price : £20 or so (bargain if I have got that right – probably not so treat with caution).

Some superb wines on display, with chenin really showing what a versatile grape it is.  We should all drink more Loire Chenin Blanc – the younger ones had glorious fresh acidity and the older ones were intriguing and outstanding when on song.

My top three was as follows:

The overall vote of all attending the tasting gave an ever so slightly different result,  with the Domaine Gaudron Vouvray 1990 (which I didn’t like at all) joint second with my second place wine.