For the non multi lingual amongst you (that includes me – I struggle with even English and speak only the most rudimentary Spanish and if they reply – usually at a million miles an hour – I am lost !!), “È questo amore?” is Italian for “Is this love?”  and seemed apt for a post on the weekend on which Valentine’s Day fell. This is especially the case when the post relates to food from a recently opened place in Cardiff called “We ❤ Italy”.

I certainly have a ongoing love affair with good Italian food. I love its simplicity and the use of only a small number of well flavoured top notch ingredients to make cracking dishes. Bad/faux Italian food on the other hand is awful. Anyone, for instance, who uses cream in a carbonara needs shooting (that includes you Rachel!).

That’s, however, your lot re Valentine’s, which in my opinion is a ghastly commercial driven excuse for florists, restaurants and purveyors of gaudy tat to bump up their prices for no other reason than to prey on people’s guilt.

On Valentine’s day (VD) night, you are at risk of being right royally ripped off in return for a glass of insipid prosecco and (like during the Christmas party season) a set menu full of stuff the kitchen needs to shift.

I am, of course, being a bit harsh as many places don’t do anything of the sort, but enough do to make me highly skeptical about going out on VD night.

You the reader (Mrs. SF included) may think I don’t have a romantic bone in my body and you are probably right, but I cooked with my own (un)fair hands Mrs. SF a meal (scallops with a gremolata and crispy Serrano ham, followed by a rack of lamb with a herb crust ) and a very agreeable bottle of wine (with lamb it had to be rioja) on the night in question rather than going out. I personally thought it was very nice.

Anyhow the subject of this post is a hole in the wall, in and out for a quick bite, joint in Cardiff. No disrespect to the place, but if you took the love of your life there for a romantic meal on VD night, you may well have been wearing the Italian food on offer before you had any chance of eating it.

The post also sort of fits in with a very loose Six Nations rugby theme over the last couple of weeks, with recent posts on “Is this going for a Welsh” and French Syrah wine. Italy’s turn this time (sorry Italy – not really – for the England win on Saturday after some decidedly unimpressive periods of play during each half from the men in white). 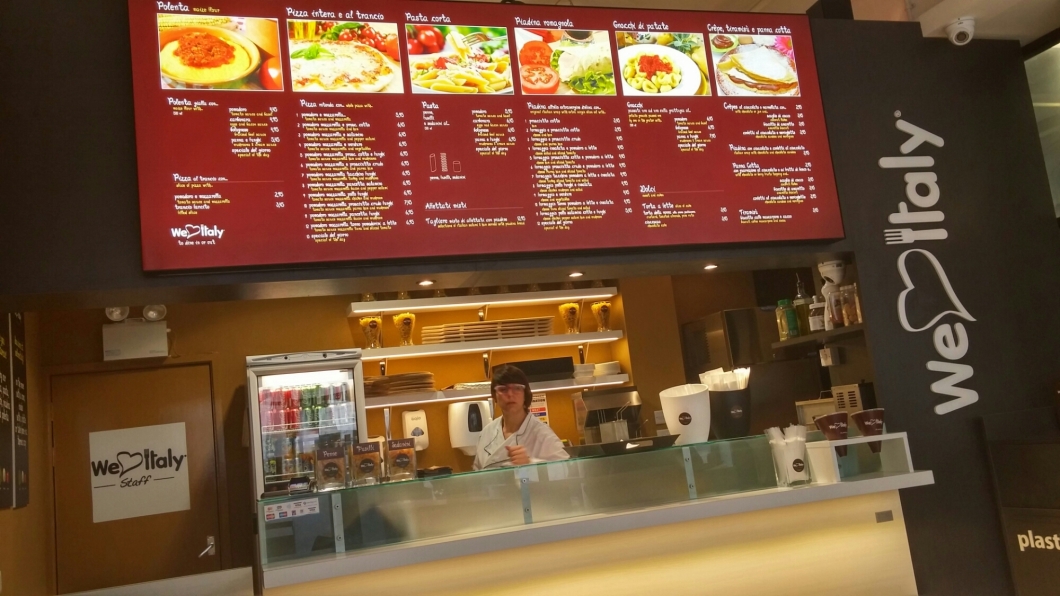 As indicated earlier, it is a tiny little place with a counter behind which are pasta boilers and a pizza oven. There are a few tables inside and more outside (which will be nice in the spring and summer).

Inside it is what I would call surgical. Sharp edges, lots of white and very, very clean. 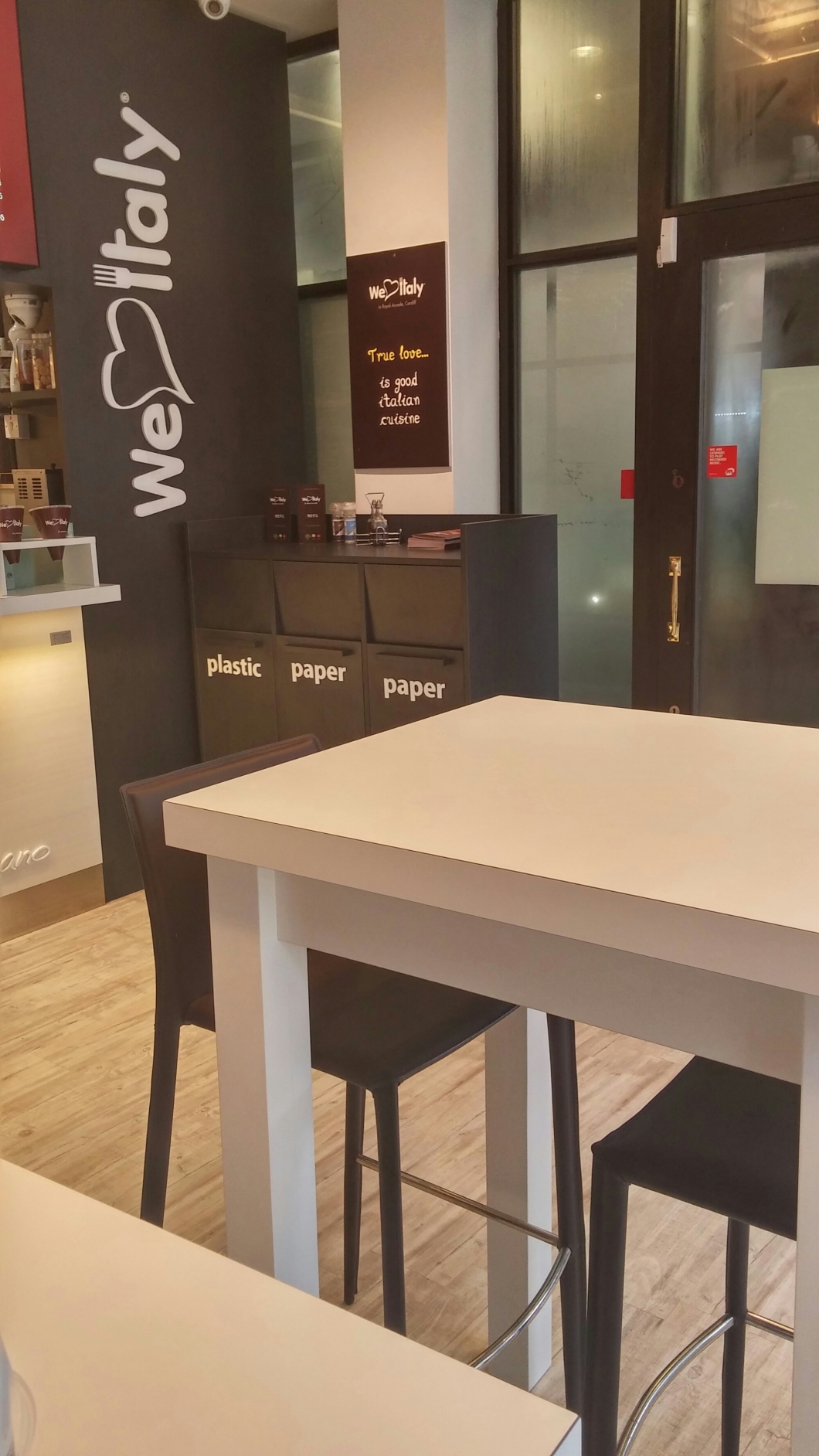 Not perhaps a place to linger, but great to nip in for a quick lunch or to fuel up before or during an evening out on the beers.

It was nice to hear lots of Italian been spoken by staff and customers on my visit – it gave the place a nice air of authenticity.

The menu is split between pasta (with 3 different types – penne, frusilli and sedanini – on offer), polenta , gnocchi, 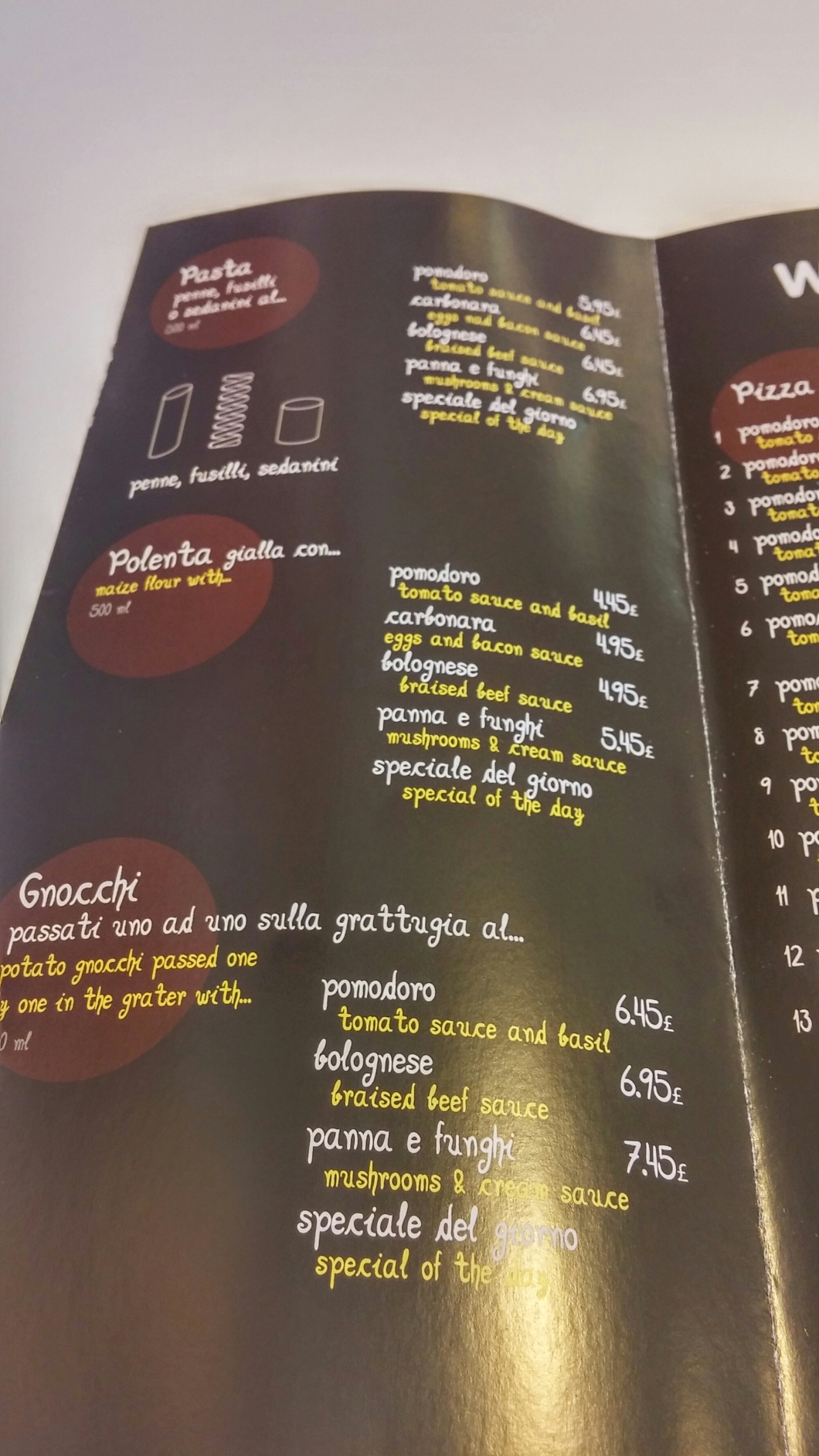 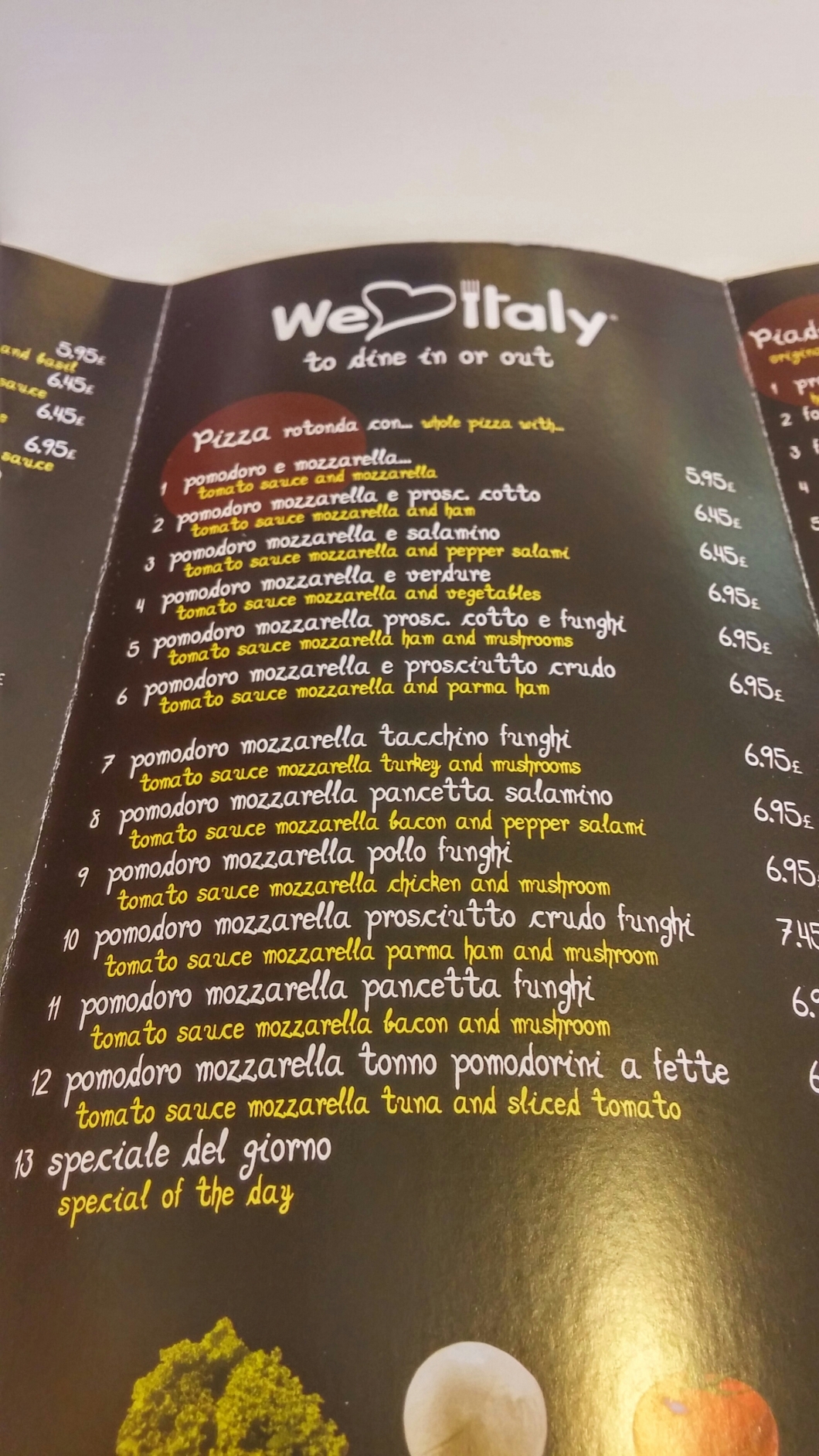 and piadina (a sort of Italian filled wrap). 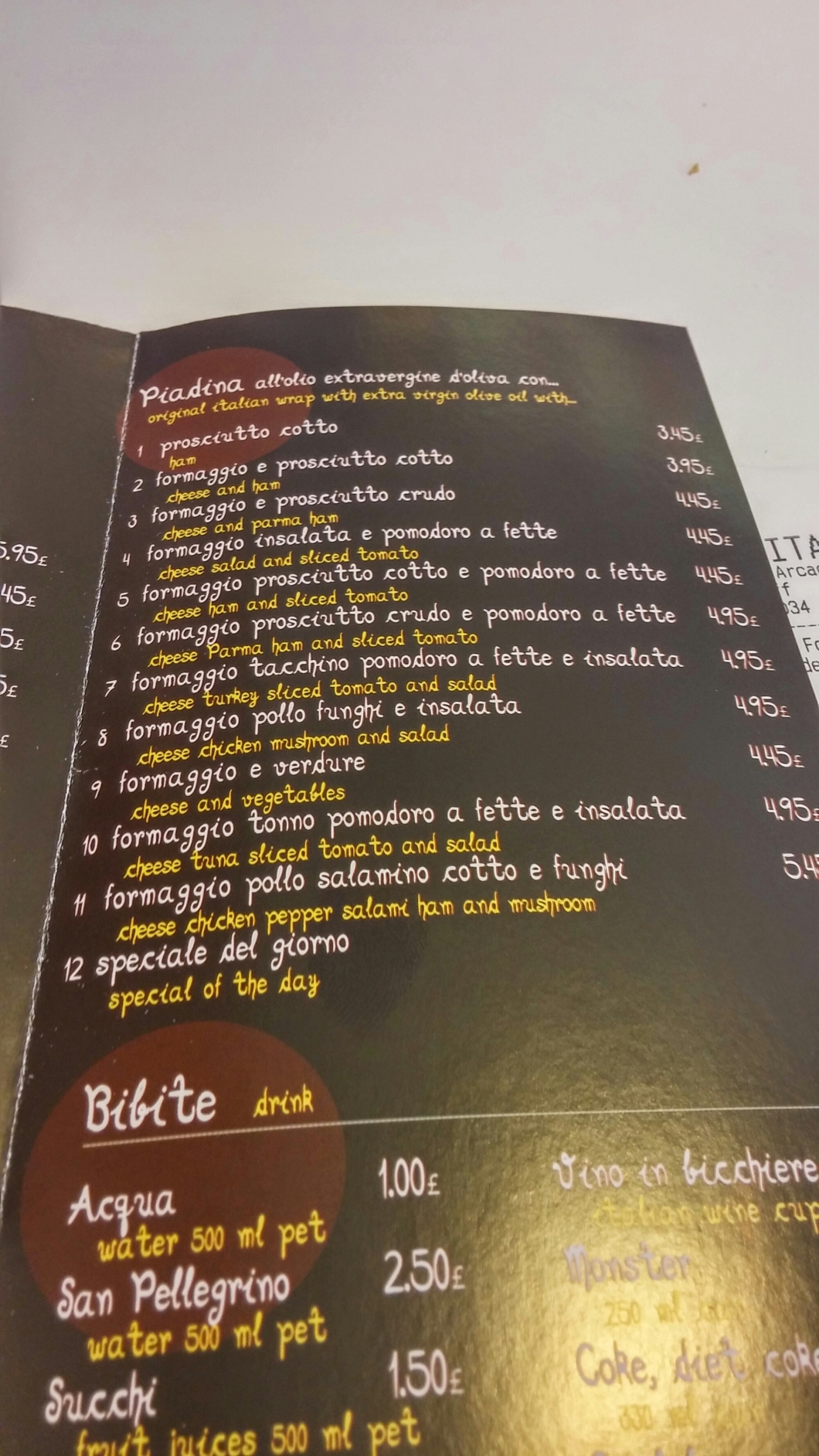 They also have a selection of desserts. Mostly the usual suspects, but also an interesting sounding sweet piadina. 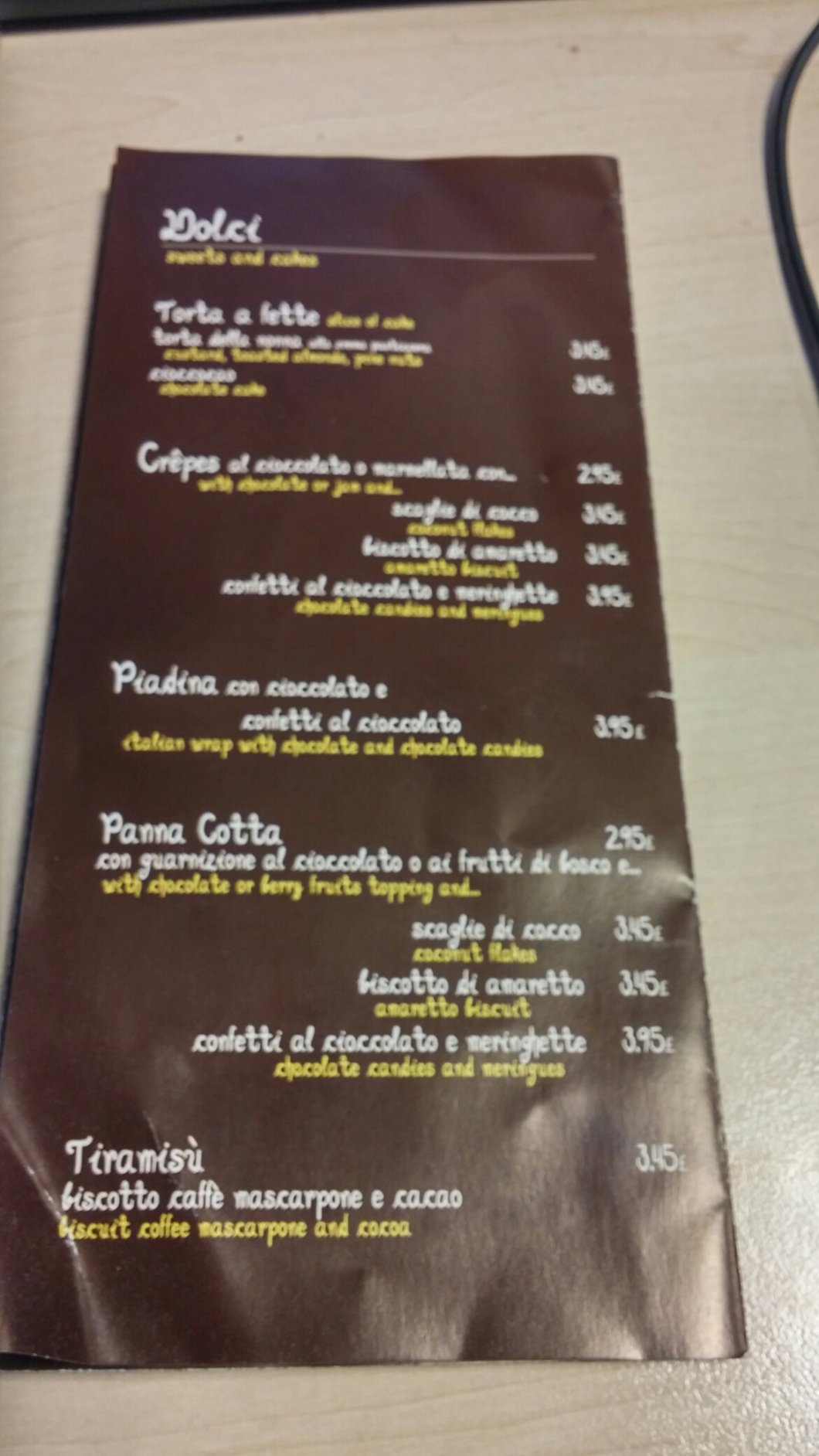 The pasta, polenta and gnocchi comes with a range of sauces (tomato and basil, bolognese, carbonara, mushroom and cheese and a sauce of the day ).

It was nice to see the pasta and gnocchi were cooked fresh to order, which whilst involving a short wait was worth it. 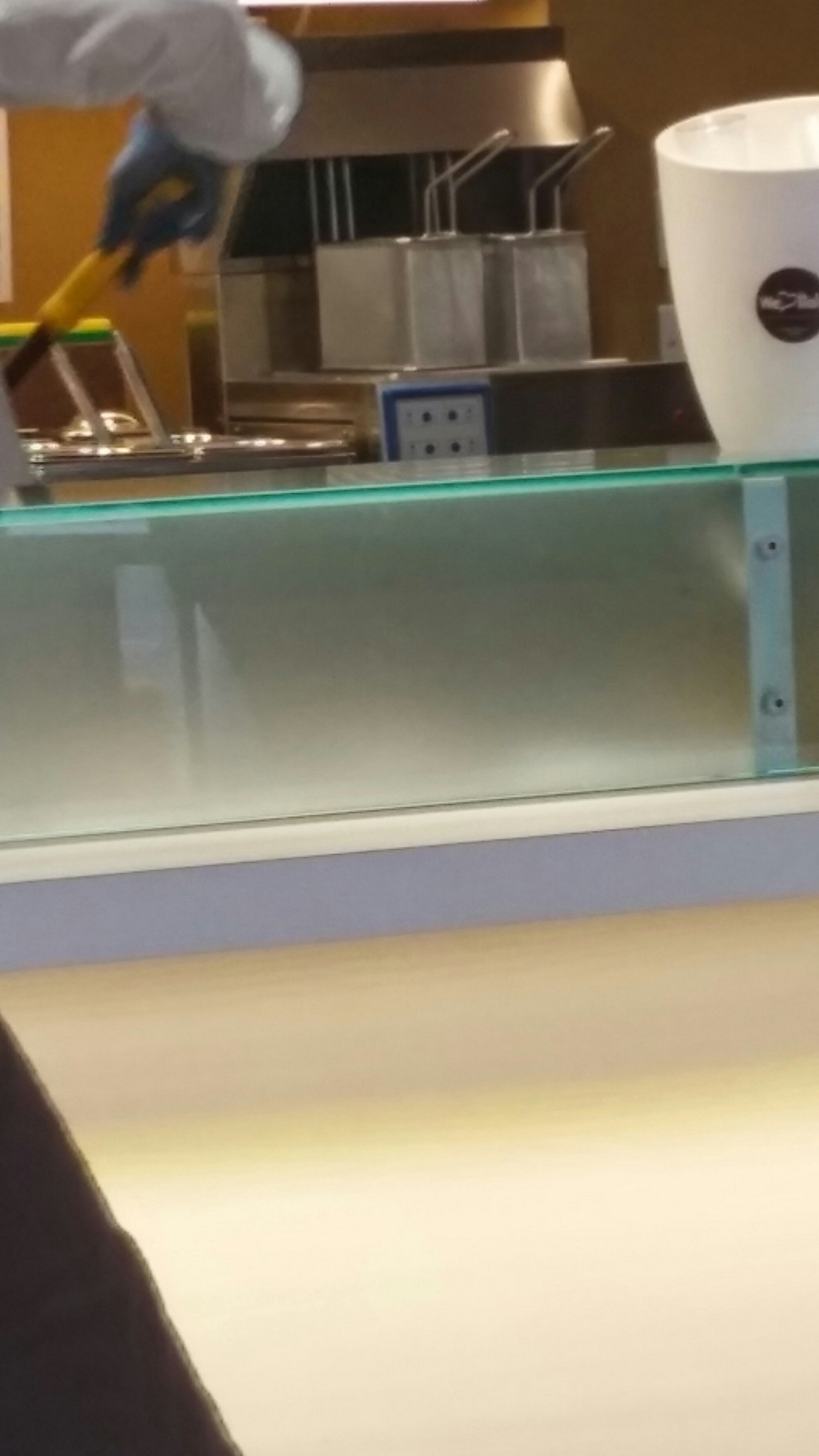 I was tempted by both the pasta and the polenta, but I love gnocchi which when done properly are yielding pillows of potato loveliness.

I went for the sauce of the day (there was actually a choice of two – arrabbiata or four cheese, with me choosing the later). 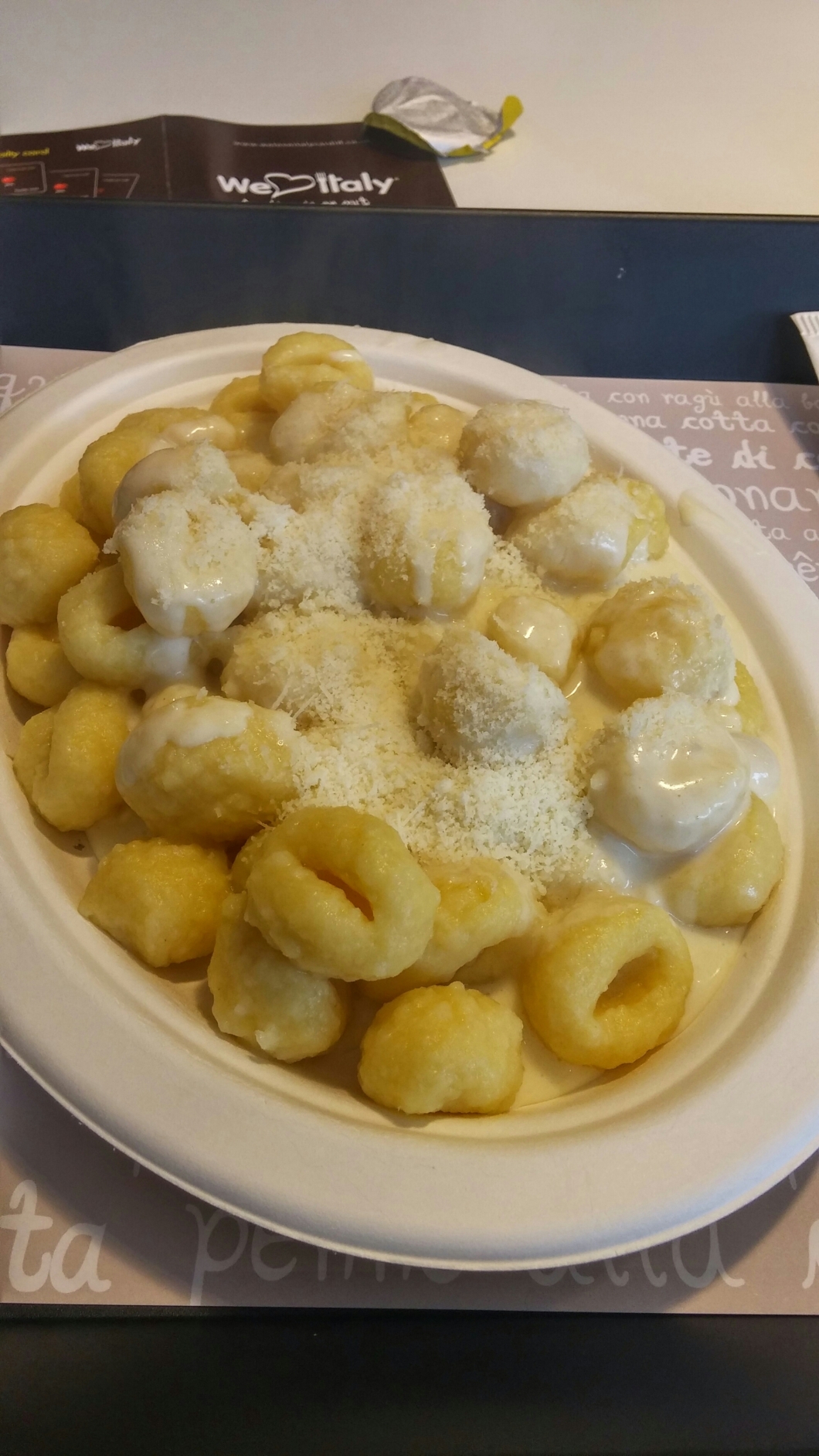 It, however, was very tasty with a lovely blue cheese tang to the sauce. Said very cheesey sauce also pooled nicely in the pleasing pockets in the gnocchi. The gnocchi were nice and light and despite my intial thoughts re price it was actually a quite large and very filling portion.

My only reservation was the bland look of the dish. It needed some colour to make it more appealing to the eye. Perhaps a bit of greenery or better still some browning on the top from popping it under a grill.

While I was eating my gnocchi, a pizza came out of the oven and it was a fine looking beast with what looked liked a nice thin, crispy base. Just how I like a pizza. I suffered a bit of food envy on seeing it 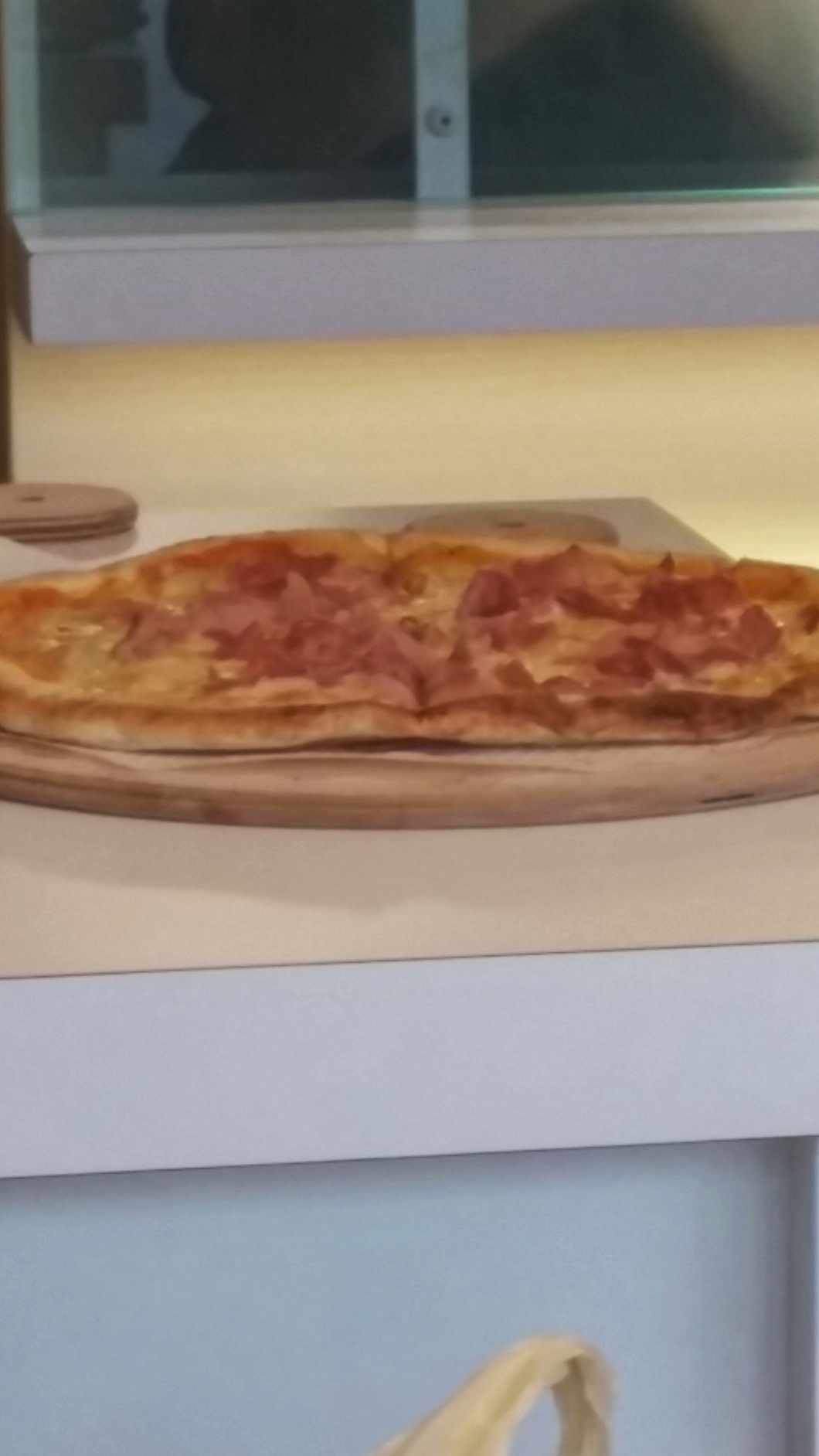 The pizzas are priced at between £5.95 (for a standard tomato and mozzarella) to £7.45 (for one with Parma ham and mushrooms added to it). It was nice to see they only have fairly basic pizza toppings. I am not a fan of weird topping on pizzas and I include in weird the ghastly ham and pineapple, which I would happily consign to the the sixth circle (heresy) of Dante’s hell.

Drinks wise they have a small selection of soft drinks (including San Pelligrino lemon or orange, for a very reasonable £1 – might want to rethink pricing here guys as a can of coke is the same price!?). On the booze front there are a few beers (horrid Carlsberg, OK Peroni and very nice Punk IPA from Brewdogs) and a wine. 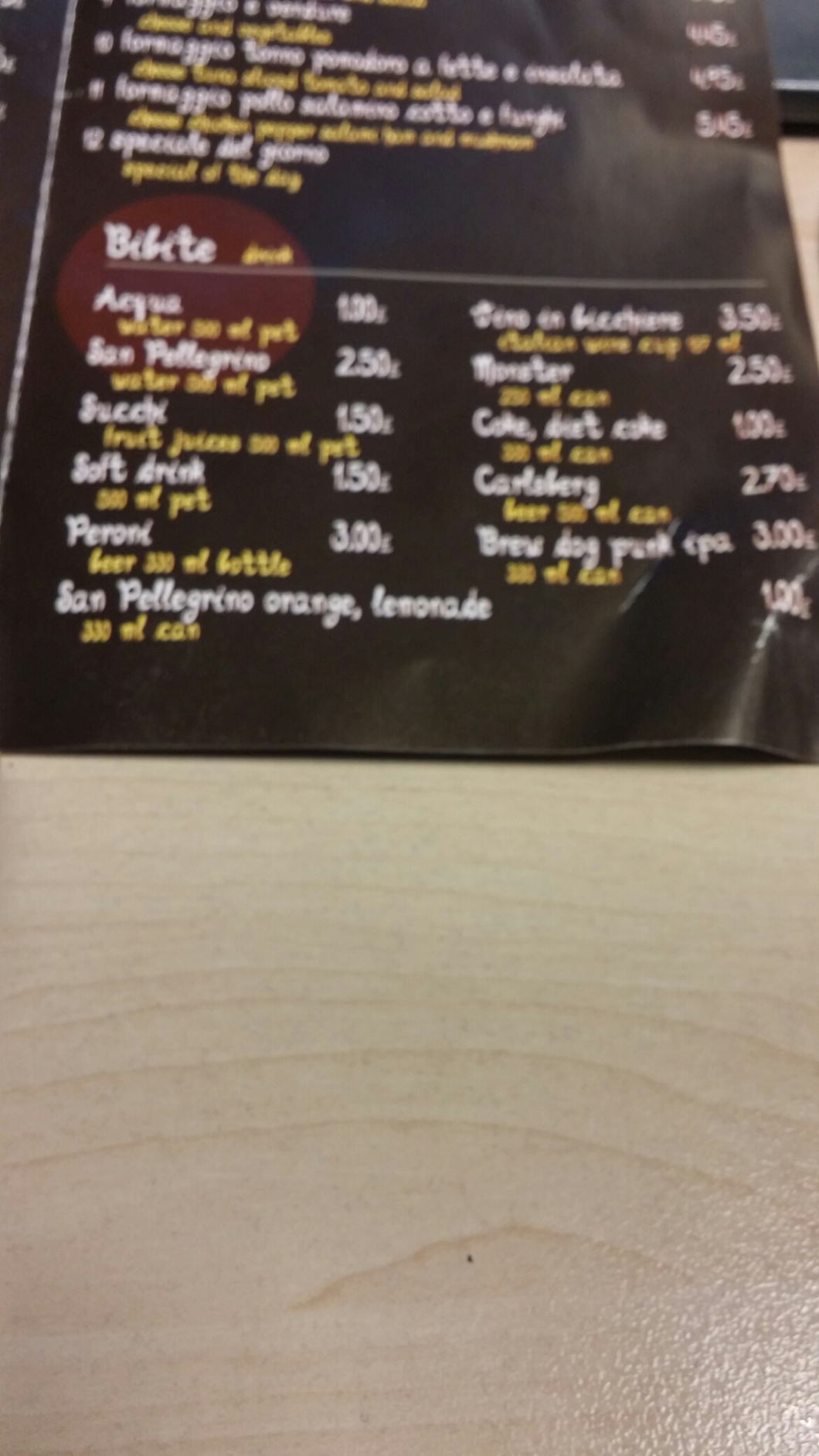 They do both eat in and take away and the piadinas look particularly interesting on the take out front with some nice sounding fillings.

They also have a few deals going during the week. The Tuesday to Friday “early bird” looks particularly appealing for fuel for after work drinks. 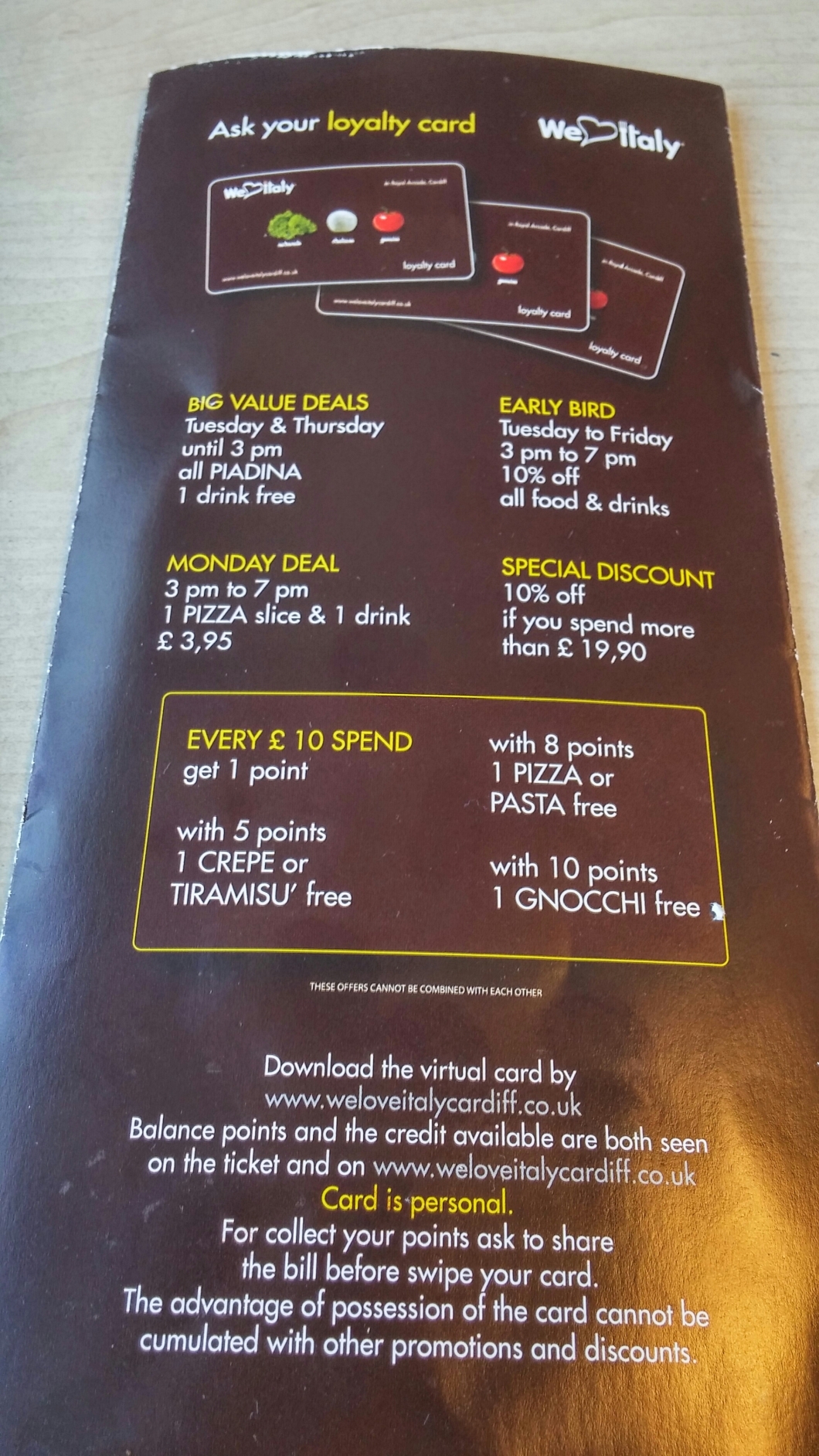 The staff were all smiles and very helpful.

The bill came to £8.25 (with a drink). OK value for what I got which was both tasty and filling, but certainly no bargain. 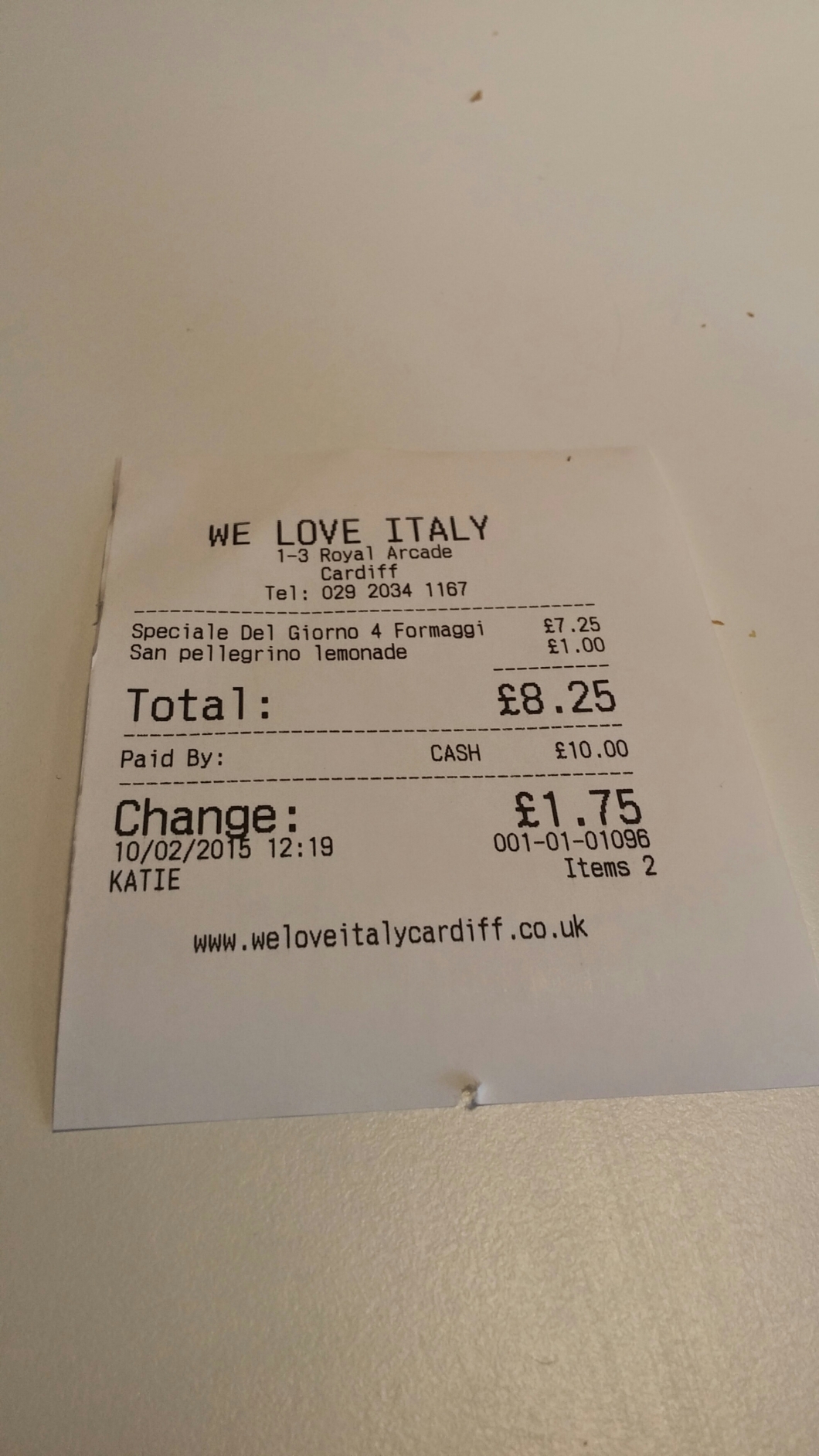 So was it “amore”? Well not quite, but I did rather liked the little joint. It is certainly a welcome addition to my list of Cardiff lunch time haunts.

Would I go back ? Definitely – want to try their rather fine looking pizzas, as well as the pasta, polenta and piadinas 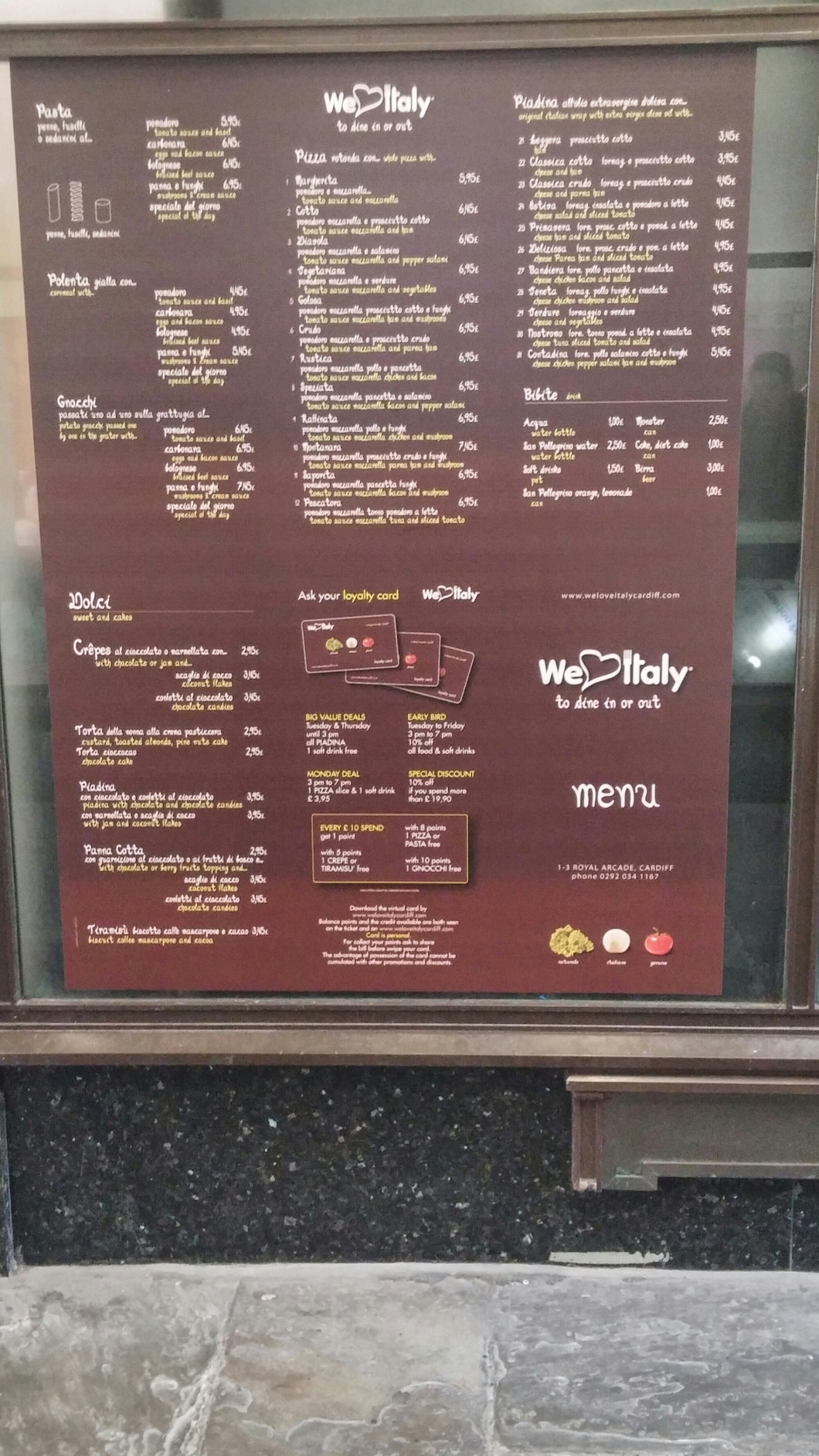