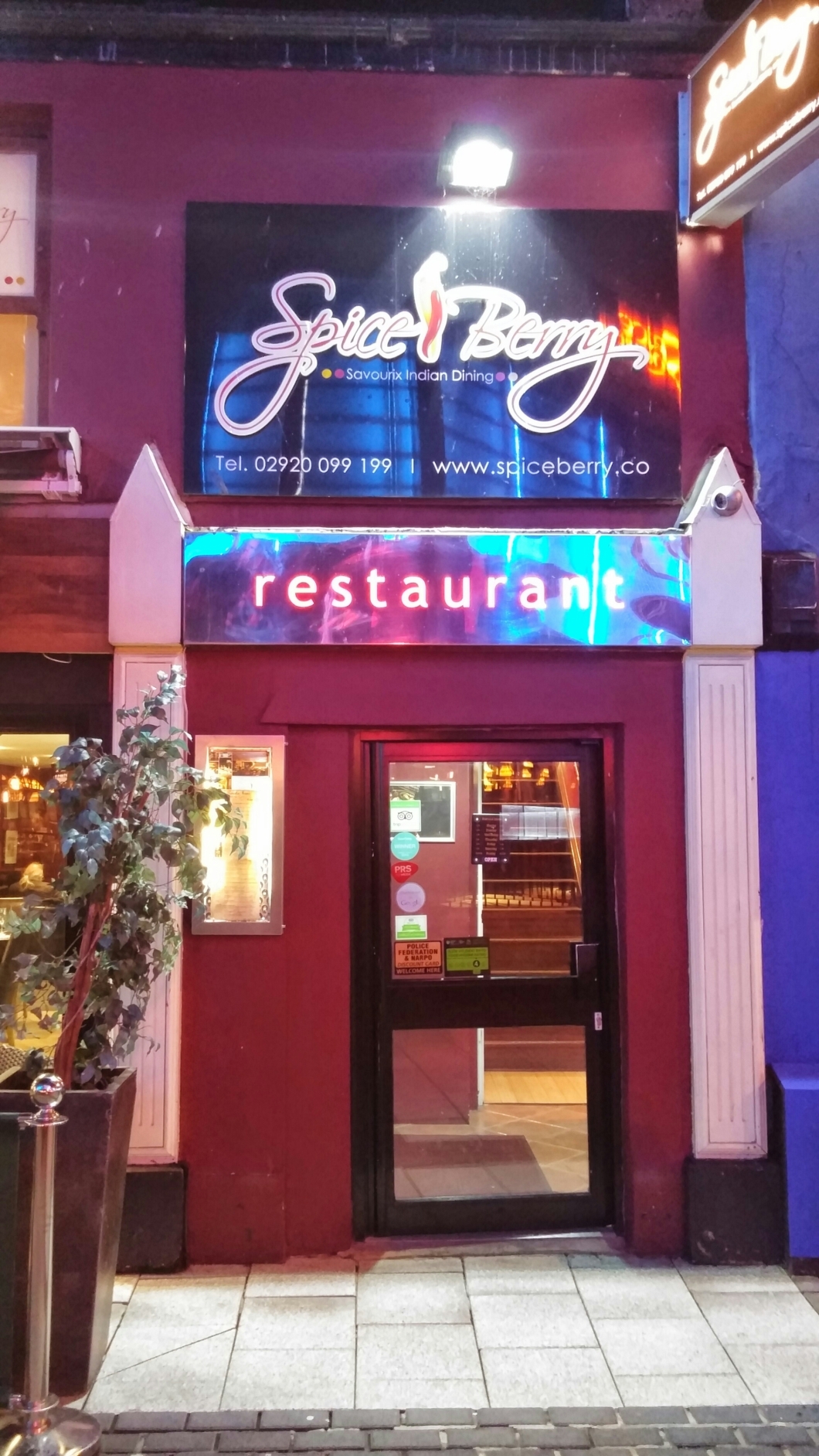 A somewhat odd title I concede, but all will be revealed.

In the last few years, Cardiff has had the happy experience of a number of what I regard as quality Indian restaurants (rather than curry houses – they are different) opening. First we had Mint and Mustard, then the Purple Poppadom (luckily located in my end of Cardiff) and in the centre of town (and – hurray – close to my work) Spiceberry. More have seemingly opened on the curry and kebab drag that is City Road, Cardiff and as well as down the Bay, so we are now somewhat spoilt for choice

These places eshew the standard fair of your normal high street curry house (including the dreaded chicken tikka masala – I know it has its fans but I am not one of them) and focus on regional Indian specialities and in Spiceberry’s case, the food of Southern Indian and God’s own country – as the state of Kerala is known.

These are not places you can roll into when the pubs shut and order whatever is the hottest thing on the menu, 9000 poppadums and a bucket of lager (I am somewhat reliving my youth here and showing my ages with the reference to pubs shutting). Nor do they, thank the Lord, have chips on their menus.

I have lived in Wales for over 30 years and still cannot for the life of me understand why anyone would order what is know locally as half and half (pronouced arf & arf), being half chips and half rice, with their curry!! If I asked for some mash potato or a baked potato with my rice, people would think I was mad, but chips and rice is fine apparently! Living in Wales, I am sure I will get a right royal slating for dissing the inexplicably beloved “arf & arf” but so be it. I won’t ever get it.

So belatedly to Spiceberry which, without a chip (and certainly no arf &arf, – so there is part of the reason for the post title ) in sight on its menu, is located on a street in Cardiff (Caroline Street) affectionately known as “Chip Alley” – oh the irony.

The entrance is pretty unassuming and easy to walk past, which is exactly what Mrs. SF did before I steered her back on course.

Don’t be put off and walk past it – go on in as we did, as it is really rather nice. 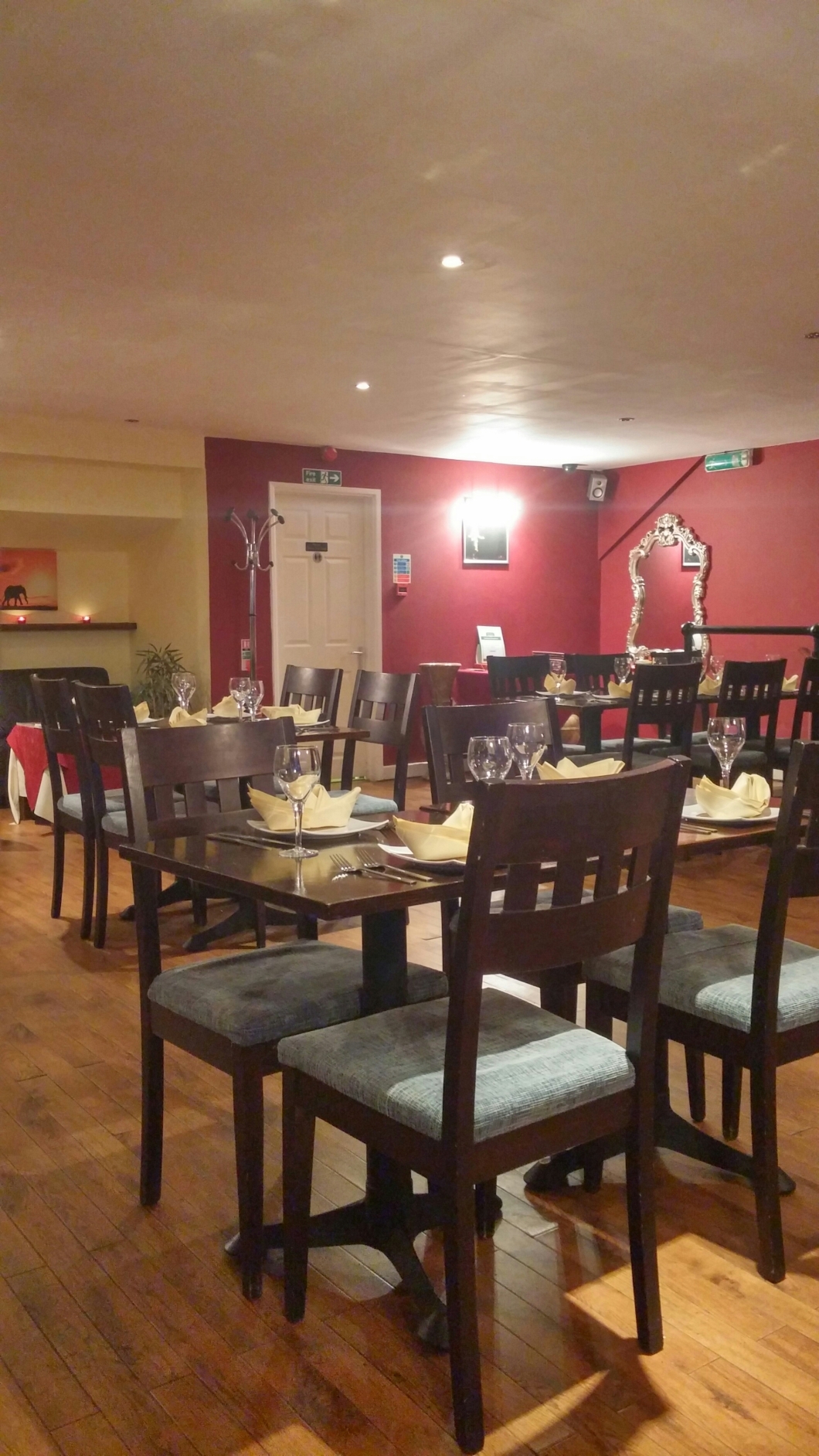 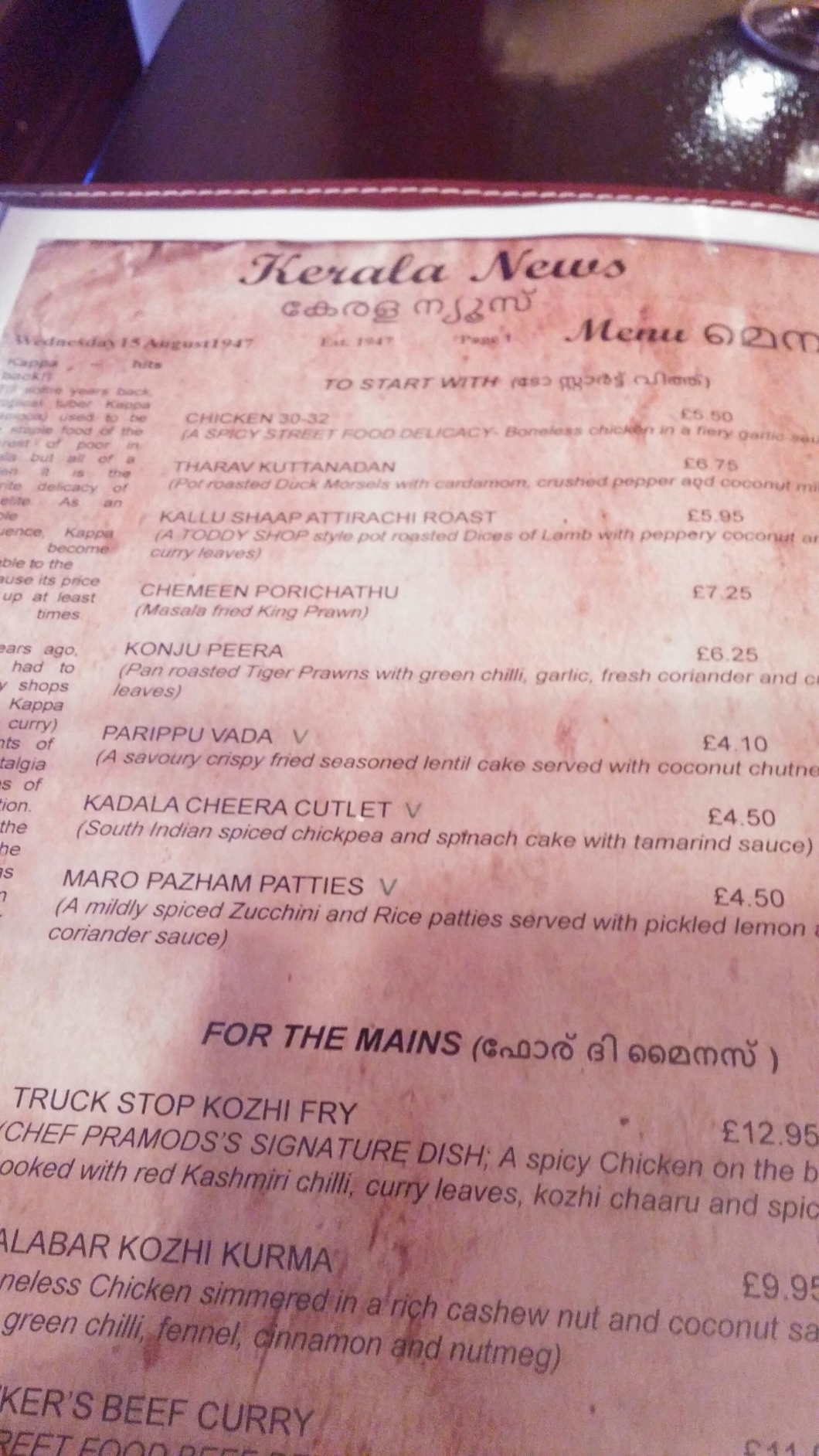 The menu was full of enticing dishes many of which neither Mrs SF or I had ever heard of and included a number of rather intriguing ones. Chicken 30- 32, Truck Stop Kozhi Dry (‘the chef’s speciality apparently) and Hawker’s beef curry (a rare thing in Indian cuisine and reflective of Kerala’s religious mix which includes Judaism and Christianity – which raises the question of which God is Kerala’s God’s own country a reference to?) to name but a few.

Poppadums were ordered and these came with a beetroot chutney (lovely and earthy with a real kick of heat at the end), a tomato chutney (bit disappointingly tomato puree-ish) and a mango chutney (fairly regulation). The poppadums were not the usually round affair and were nice enough, bar from a rogue stale one.

To start, I went for the Kallu Shaap Attirachi Roast. A toddy shop dish (toddy being a palm sap based alcoholic drink, with toddy shops being establishment that sell both toddy and food to go with it) consisting of diced pieces of lamb potted roasted with pepper, coconut and curry leaves.

Whilst this dish had a bit of peppery heat to it, it was in no way hot and flavour wise it was all about the spicing. The lamb was beautifully tender and coconut and lamb really is a match made in heaven. Add to this fragrant curry leaf and it made for a lovely dish. 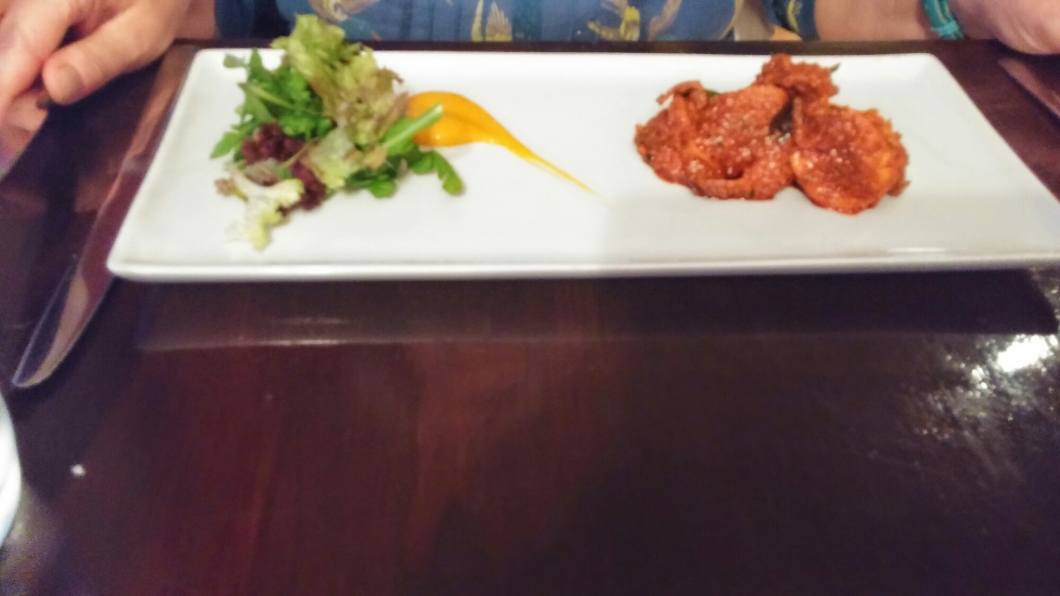 Mrs. SF has Konju Peera, a pan roasted tiger prawn dish. Now this had a bit of chilli heat to it with a nice punch of garlic, tempered by the herby freshness of coriander. Mrs. SF enjoyed this dish but said the prawns were a touch over cooked.

Both came with a side salad (sadly undressed) with a blob of (overly sweet) mango coulee. My view was (and remains) scrub the coulee and properly dress the salad otherwise why bother with the salad. 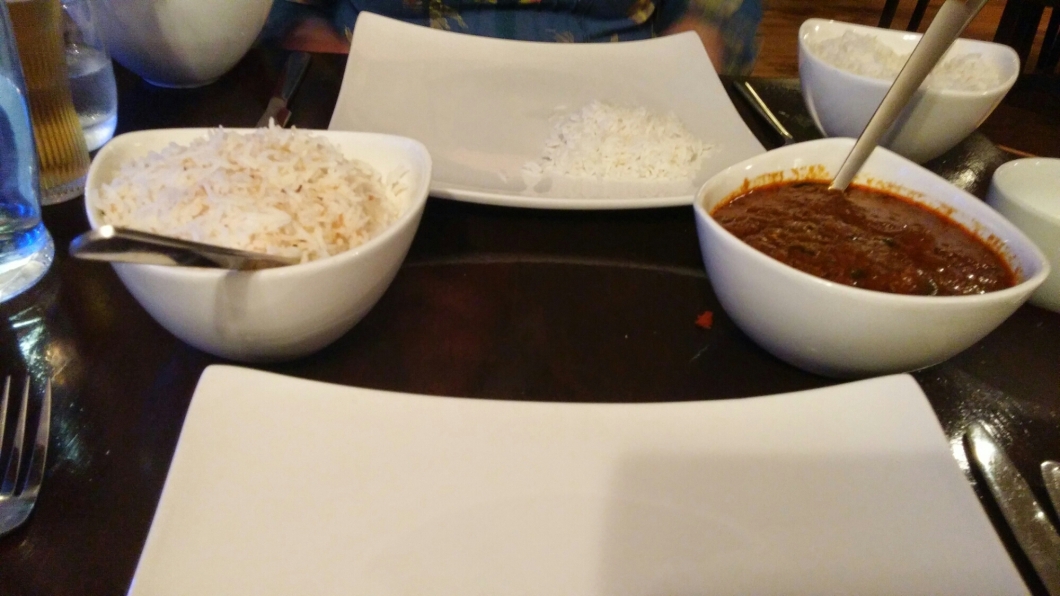 On to mains, I went for the Hawker’s beef curry. Meltingly tender chunks of beef in a rich chilli gravy spiked with curry leaves. Not hot, but nicely spice and what I would regards as proper comfort food. An Indian winter warmer beef stew. I had coconut rice with it which was not sloppy stuff where coconut milk added but rather generously flecked with toasted coconut. Cooked to fluffy perfection it was lovely. 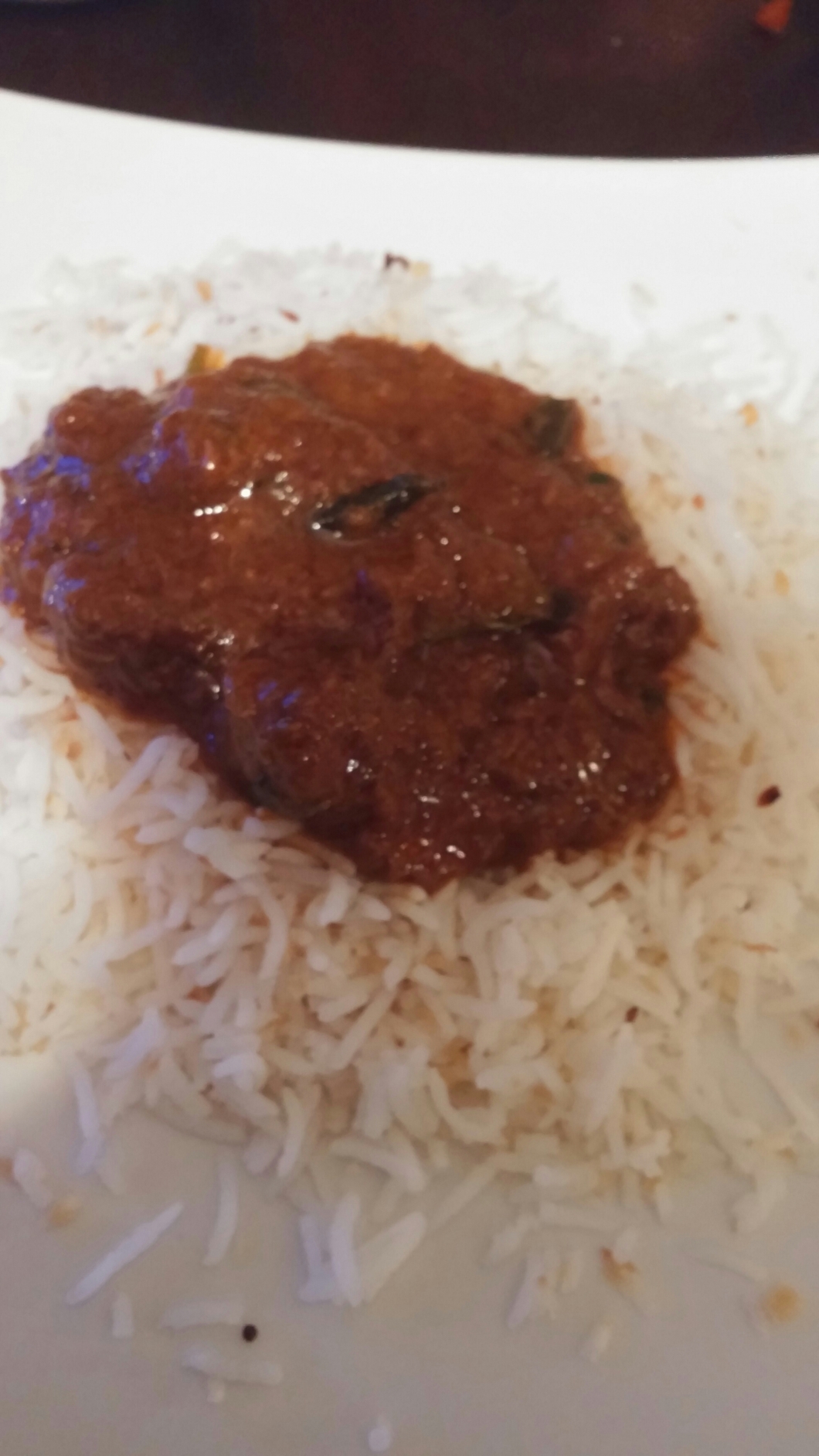 Mrs. SF went for the Truck Stop Kozhi Dry, a chicken dish she was warned by our waitress was quite hot. The dry referred to the fact that the on the bone chicken came with more a loose paste than a sauce. Whilst it had some chilli heat this blended well with the other spices and was bearable even for a chilli wuss like me. To a chilli fiend like Mrs. SF it was no bother at all. The chicken was beautifully tender, being easily teased off the bone, and full of flavour. A very nice dish that must make many a truck driver very happy in Kerala. Mrs.SF had it with some very nice perfectly cooked fluffy plain rice.

We were stuffed after this and passed on puds . Drinks wise I was driving so has a masala chai. Whilst nice this was a tad on the weak side for me. Mrs. SF finished off the meal with a toddy laced coffee (having had Cobra with her curry). This was interesting and quite nice, but somewhat ruined by a load of whipped cream being dumped on top of it. 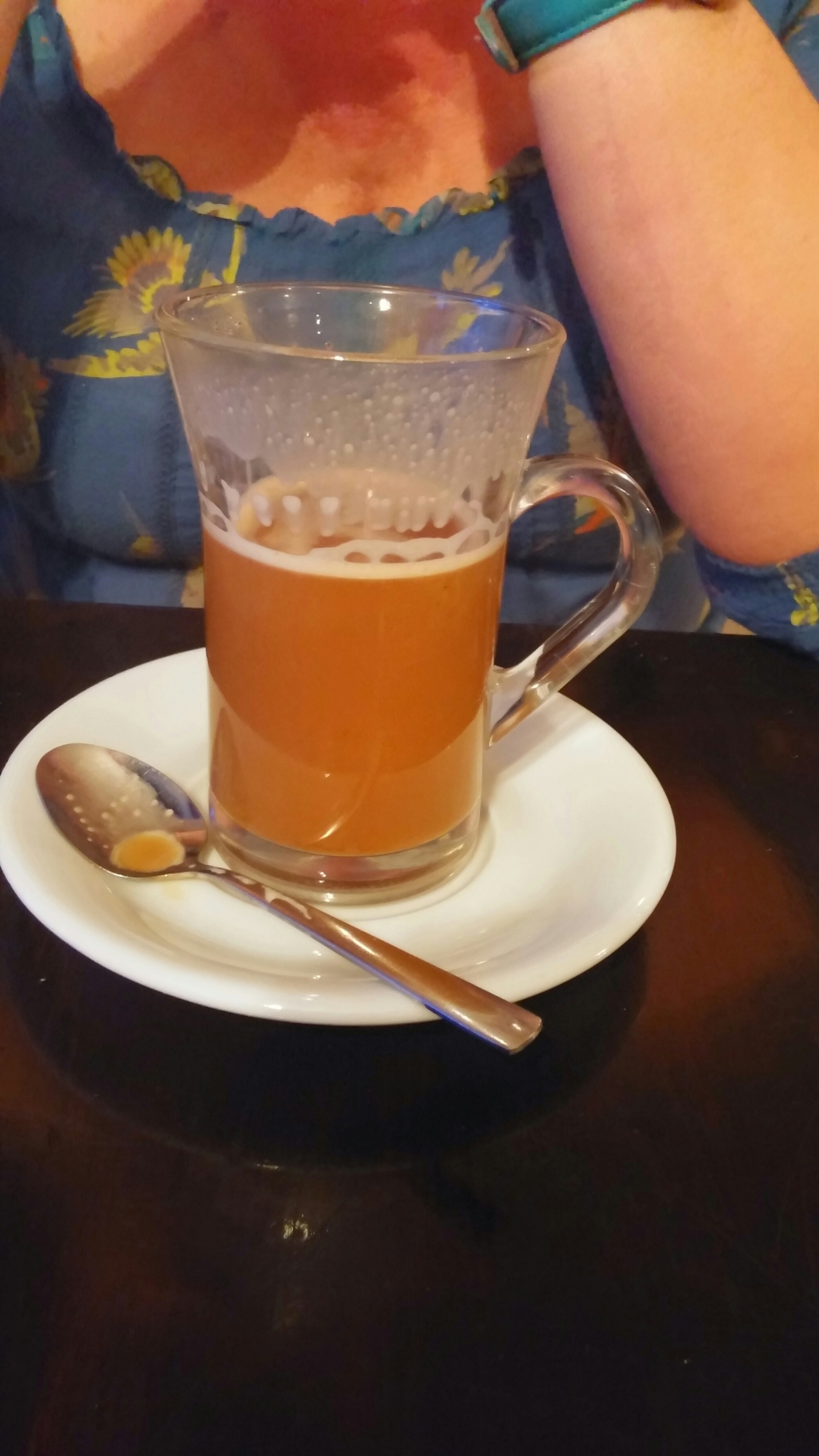 The damage was just over £55 which I though was not bad at all for the quality of the food.

I really like Spiceberry. A rather unappealing exterior hides a lovely little place serving fine Southern Indian food. In summary it ain’t half bad at all (see got to the title in the end) and to me the best Indian option in the centre of Cardiff.

Dish of the night was the toddy shop lamb dish, which really was a beautifully spiced and flavoured piece of cooking

My slight concern is on a Friday night at 7pm we were one of only two couples in the place. Maybe it was because it was Halloween, but come on Cardiff places like this, offering a real taste of Southern India, deserve to be full. They even deduct from your bill your parking cost if you use the nearby St.David’s 2 or John Lewis car parks on presention of tickets( bit confusing on site but seems to be subject to ticket being from after 5pm). How good is that!

Would I go back? Definately. Am hoping they start opening for lunch.