Manuka, Aberaeron – cooking that is the bee’s knees – restaurant review.

As my previous post indicated Mrs. SF, the dogs and I (in that order of importance) spent a glorious week by the sea in lovely Aberaeron.

Our very relaxing week included lovely walks on the coastal path, along the river, mucking about on the beach and, of course, as is always the case with a pig like me plenty of food and drink.

Aberaeron as a town has many charms, not least a number of good establishments selling food and drink. These include the Harbour Master Hotel, the Cellar and the main focus of this post, Manuka.

Dealing with the first two briefly, we had a very pleasant tapas lunch one day at the Cellar (including a particularly good lentil and chorizo dish for a mere £3)  and also visited the bar at the Harbour Master Hotel for a drink many an evening (they have a nice selection of wines by the glass).

Getting to the point unusually quickly for me, on a previously visit to Aberaeron we had been very impressed with the food at Manuka a restaurant near the harbour, notwithstanding a somewhat lacking wine list, and it was a natural choice for a meal to celebrate my birthday (39 again). It bills itself as a fine dining establishment on its website and this usually raises a red flag for me, as I generally find if a place’s food is fine dining quality it doesn’t have to say it as the food speaks for itself. In this case the tag was well merited, with the chef having some pedigree. She has previously working under the Great Sweary One, Gordon Ramsey , no less and it certainly showed in the presentation and quality of the food we ate.

The menu is admirably short with 5 starters and, usually, 6 mains (although on the night of our visit one main was missing from the menu we were given as against the one on display on the website and outside the restaurant – typically it was the one I wanted).

We started off with a rather nice amuse bouche which had a good hit of salty parmesan that worked very well with an aperitif of fino sherry. 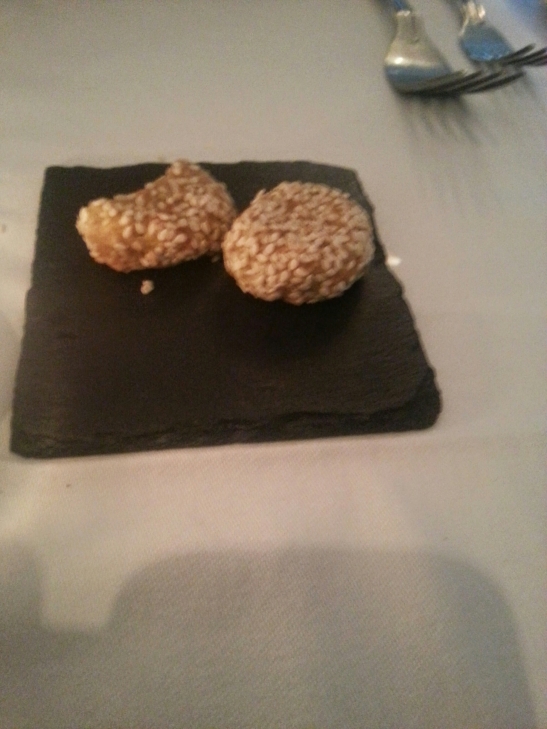 The sherry was served in a very odd glass and I do wish restaurants that serve dry sherry would all recognise it should be served in a proper white wine glass. What we got wasn’t as bad as the dreaded schooner they served it in on our previous visit, but still not really suitable for what was a nice fino. It was promptly decanted by me into the white wine glass on the table.

For my first course, I choose “Surf n Turf” This description does not really do justice to what was a beautiful balance of flavours. It consisted of pan roasted scallops with braised pork shoulder, cauliflower cream, pickled onion, samphire and a pea puree. 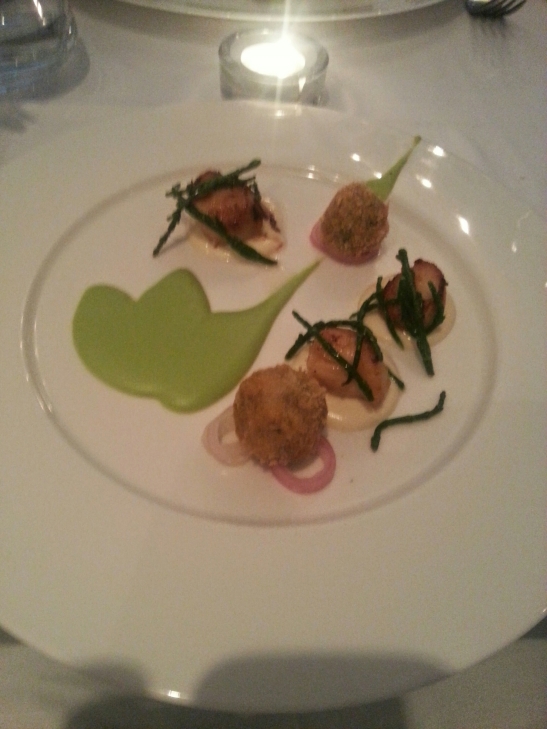 The scallops (queenies) were cooked perfectly with a nice caramelised crust on the outside and just the right side of translucent on the inside. The sweetness and soft texture of these was complimented perfectly by the saltiness and crunch of the samphire. The cauliflower cream was as smooth as a baby’s bum with no hint of graininess. As for the braised pork shoulder this came as two deep fried crispy balls of porky loveliness, which were packed full of flavour yet as light as a feather. The richness of the pork was nicely cut by the pickled onions (slivers of lightly pickled shalllot) and the fresh pea puree. This dish was a perfect combination of sweet, salt and sour. I loved it.

Bread delivered to the table was that just baked warm with a crisp crust and a light interior and came with a nice sea salty butter. It disappeared very quickly.

Mrs. SF went for the rather simple (dare I say a bit boring) sounding Goujons of Lemon Sole with Pea Puree, Cucumber and Tartare Sauce.

This was pronounced as beautiful by Mrs. SF. Sweet fish cooked to perfection under a thin as you like crisp breadcrumb coating (panko I assume), complimented by lightly pickled cucumber (wrapped around the goujons, but amazingly not adversely effecting the crispness of the coating) and a great home made tartare sauce. The gherkins in the tartare sauces and the pickled cucumber combined very nicely with the pea puree and the fish goujons

Next up I had intended on ordering the Oakford (a village down the road from Aberaeron) suckling pig four ways (I had seen it on the menu on display outside the restaurant and it sounded so good), but it was not available so I defaulted to my second choice, that 70s classic, Lobster Thermidor. Lobster always reminds me of a late 70s holiday with my parents on the Costa del Sol where they ordered lobster and me and my sister were given the legs. Not the meaty claws, oh no, we got the thin meat free legs to suck on while they feasted on the meaty bits!!! This paled into insignicance mind as against another holiday where my sister and I were made to wear “It’s not my fault” (me) and ” It’s not fair” (my sister) t-shirts. OK we could be pains as children, but that was just downright mean!!!!

Rubbish picture that doesn't do this dish justice at all - sorry.

The lobster dish came with triple cooked chips and a salad. The half lobster (half was £20, a whole one £36) shell was packed with meaty chunks of sweet (locally caught) lobster and a lovely rich sauce. The triple cooked chips were quite possibly the best chips I have ever had and are now my benchmark chip going forward. They were beautifully crispy on the outside and wonderfully fluffy on the inside with no hint of oiliness and were perfectly seasoned – potato heaven. They were perfect for dunking in the sauce and once the supply of chips was exhausted I resorted to using my finger to gets to the last remnants of the sauce from the shell (much to Mrs. SF’s disgust). The salad included lovely fresh raw broad beans, avocado and romano peppers, as well as the usual suspects, and was dressed with a nice vinaigrette which worked well as against the richness of the lobster. A great dish which I thoroughly enjoyed.

Mrs. SF had rabbit loin wrapped in serrano ham with fondant potatoes, braised cabbage, charred leeks and a rabbit scotch egg. This was a crackerjack of a dish , with the rabbit beautifully moist (the serrano having done its job and the kitchen clearly really knowing what it was doing) and stuffed with a rich rabbit offal mix, I think. The scotch egg was a tiny one involving a rabbit meat mix (again nicely moist) and a quail egg, with a perfectly runny yolk. 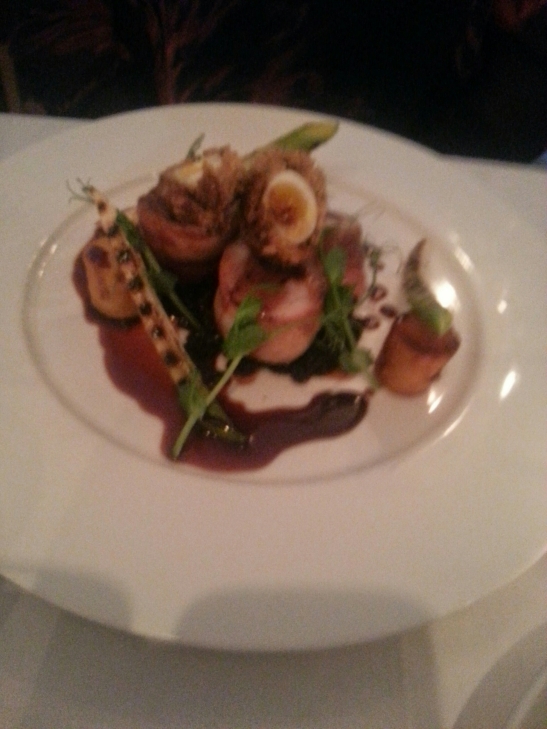 This was precision cooking with the dish hitting the right notes on all fronts flavour wise, including some lovely buttery fondant potatoes and great veg. Rabbit can be a tricky meat to get right, with the risk of it drying out, but this was a triumph.

Everything was seasoned just right and neither Mrs.SF nor I needed to use, at any point, the salt or pepper on the table.

Wine wise I choose a Domaine Wachau Gruner Veltliner (priced at £22.50), an Austrian wine with nice fresh green apple flavours and a back note of white pepper. Gruners are great food wines going with most foods and is a good wine to have if your food choices create a “do we go red or white or do we get both?” dilema. It was part of a diverse wine list in terms of types and price (much improved from our first visit to this restaurant – it is always good to see a Gruner on a list) and went very well with both the rabbit and the lobster. Mrs. SF, who is fussy about what white wines she drinks, approved of the choice.

The dessert menu was full of stuff I love so choosing was tricky.

After much indecision on my part, I went for the rather unimaginatively titled Mango, Mango, Mango.

A nice enough dish of various forms of mango (fresh, dried, in a parfait, in a sorbet and in a coulee). I do like mangoes, but if am honest it was a tad mango overkill. Mrs. SF did pointed out I could hardly argue I hadn’t been warned on the basis of the dish’s title. A valid point I conceded. I of course ate it all (rude not too), but was a bit mango’ed out by the end.

Mrs. SF’s choice of the delightful sounding peanut butter parfait, cherry jam, cherry sorbet and almond bricelet (?) was the clear winner on the dessert front being a perfect combination of salty and sweet. On the basis of the tiny amount I was allowed, all I can say is god it was good, with the peanut butter parfait being particularly moorish. 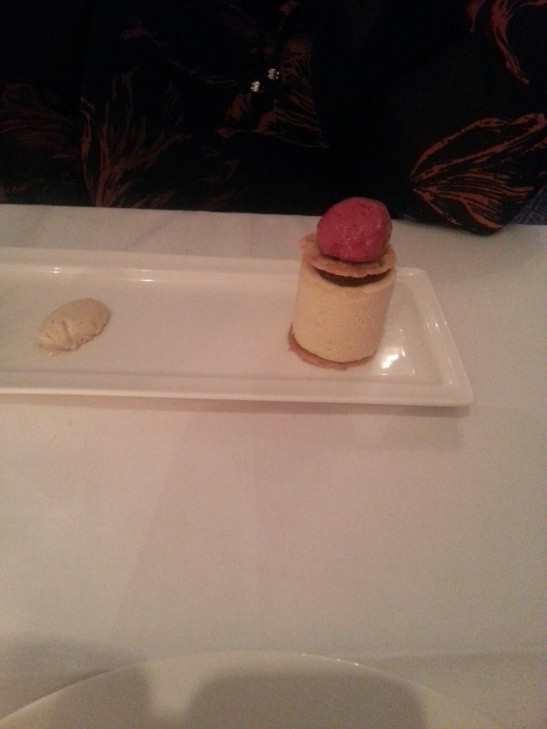 To accompany these desserts we had a glass each of a Chateau Briatte 2007 sauterne, which was a good match for both being sweet but not too sweet (so not cloying). Weird bit of pricing here mind – £6 per 125ml glass or £18.50 for 375ml bottle, so not much of an incentive to buy the bottle is there it being 50p more than buying the same ml. amount by way of 3 glasses! Usually you slightly drop the bottle price to encourage that extra glass. I enjoyed this wine and if the bottle had had a discount over the glass price I may have gone for the bottle rather than just a glass each.

We finished off the evening with good espresso coffee and killer vanilla macaroons. Mrs. SF pronounced these better than those we had in Laduree in Paris. Praise indeed, which I agreed with wholeheartedly. 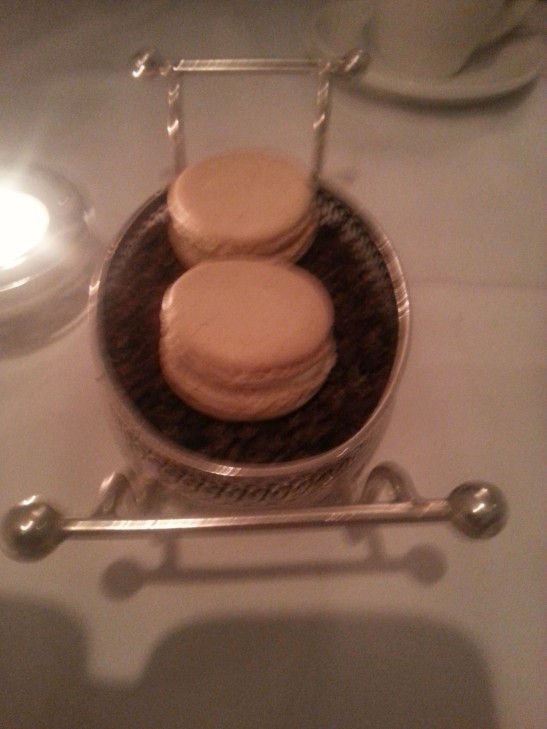 Services was efficient and friendly and the damage (before the addition of a well deserved tip) was £121. I considered this good value for the quality of the food we ate.

Mrs.SF and I were really, really impressed by Manuka. It is the sort of restaurant I would kill to have within walking distance of my house. It is reason enough for a weekend away in lovely Aberaeron.

Would I go again? In an instant. We are already planning a trip back to Aberaeron and will certainly be going back to Manuka when we do. It really was excellent in every way and I cannot recommend it highly enough. If you are visiting Aberaeron, go, really I mean it, go.

For me the best dish

Open Thursday – Saturday only at moment, but check website as they mentioned they may expand days they are open in the height of summer.

7 comments on “Manuka, Aberaeron – cooking that is the bee’s knees – restaurant review.”

This entry was posted on Jul 6, 2014 by solicitingflavours in Uncategorized.