A slightly cryptic title I know, but there is method in my madness. The latest lunch time spot that J and I visited was the The Meating Place in Cardiff. It has a lunchtime offer of 2 courses for £9.95 which according to their website and a board outside comes with a deal of your drinks free if you are not in and out within 30 minutes. Hence the reference to time in the title.

Offer on board outside restaurant

In our jobs, J and I work long and often anti social hours (well I do), but the quid pro quo is we are afforded considerable flexibility and therefore are not particularly time constrained when it comes to lunch. Other people, however, are and may be enticed in by this free drinks offer if not “in and out” in 30 minutes.

Neither J nor I can be regarded as shrinking violets, with both of us able to talk for Great Britain. When we meet up it is pretty much constant chat punctuated by mouthfuls of food and this requires a full hour at least. As I hate being rushed I considered the 30 minutes as a non starter for us.

The online menu does refer to ” Terms and Conditions apply – please see in store for full details” as does the board outside (if you look really closely) but it is unclear how it works.

If look very carefully there is reference to T&Cs applying.

No mention of "Terms & Conditions or the online offer at all !

If you are going to offer this, make it clear upfront what it entails (i.e. put full details on the menu and the website of the limits to the offer – it’s not as if there isn’t space a plenty to do so) and explain it to diners unprompted. Presumably they expect you to tell them you wish to take advantage of this offer and then they reel out the exemptions. I actually find the whole thing a wee bit disingenuous (especially the “Terms & Conditions apply – see in store for full details” statement only being on the online menu and no mention of the offer on the menu in the restaurant).

J and I never had any intention of or indeed interest in being rushed to get through a 2 course meal in 30 mins so we didn’t ask for sight of the “in store” Terms and Conditions (I ask you, really) and ignored the clock and the offer, but if you want to take up the offer best ask upfront about it as if our experience is anything to go by it won’t be offered unilaterally.

Rant over and on to the food which, whilst not perfect, was not at all bad when you take into account the price. I started off with the 3 cheese mixed leaf salad. On asking the waitress what the 3 cheeses were I was told perl las (a welsh blue cheese, which is a favourite of mine), cheddar and ” umm , something from Carmarthen I think “. Cheese salad always reminds me of when I briefly went vegetarian in my youth to (I hoped) impress a girl (it didn’t remotely), I was rather taken with, who was a vegetarian. In those bygone days cheese (usually only cheddar) salad was the only, deeply unimaginative, vegetarian option on most restaurant menus.

Not much of a looker, but tasty enough

When it arrived it was somewhat lacking in perl las with lots of cheddar and whatever the other cheese was (not sure, but it was quite nice). The dish were well dressed with a good mustardly dressing, but lacked salad components other than mixed leaves. I had a couple of cubes of tomato and that was it. I noted another table had the same dish and they had loads of perl las and tomatoes. I felt like saying “Oi, you’ve got half of my starter”. Having said this, I actually quite enjoyed mine and ate it all.

J had chicken wings which were a decent size portion and a perfectly ok, if slightly boring, dish. I ate one wing and bar from the skin being a bit flabby (I do so not like that) thought it was fine if a bit uninspiring. 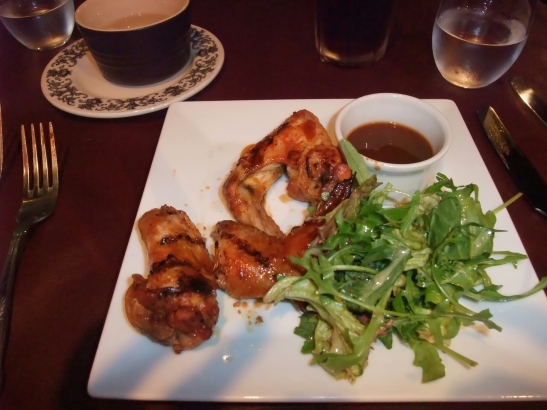 For mains, I did ask what the meat sandwich of the day was and on being told it was gammon I defaulted to my backup choice of the pulled pork burger and chunky chips. Funny, if the waitress had said baked ham or bacon I may have gone for it, but gammon always makes me think of a ghastly 70s meal involving a very salty slab of rubbery daygloo pink meat and a canned pineapple ring. 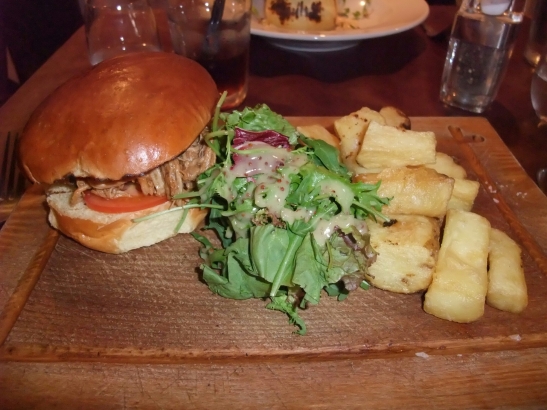 My pulled pork with chunky chip was pleasant enough, with the pork having a nice smoky flavour to it coupled with a vinegary (in a good way) barbecue sauce. The chunky chips were indeed chunky, as well as being for the most part crisp on the outside and fluffy on the inside (as any good chip should be). They were well seasoned with a nice amount of sea salt on them. My only gripes with this dish were a rather dry bap and it being served on a wooden board. What’s wrong with a nice plate? By all means display stuff on boards, slates or whatever takes your fancy, but I like my food served on a proper plate thank you. 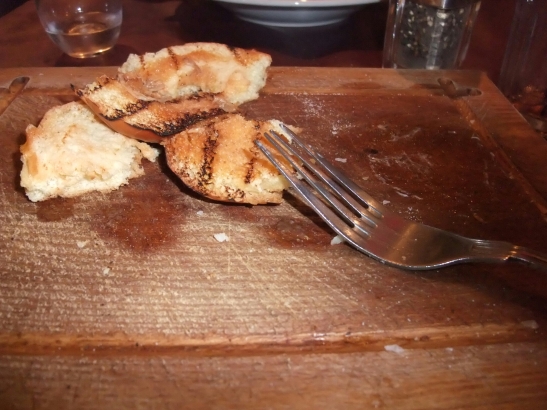 What's wrong with a plate?

J initially ordered the chicken, advocado and shallots salad, but was then told that “chef thought the advocados were not ripe enough to use”. J asked if something could be subsituted into the salad in place of the advocado and was offered “umm how about more chicken”. This was, unsurprisingly, declined. As other dishes involved asparagus, a bit more imagination could have been used here to make the dish more enticing san the advocado.

J eventually choose the vegetarian option (still being on her frankly odd caveman diet) on the menu, which was billed as a baked stuffed onion, with cream, parmesan and asparagus. This was perfectly nice if a touch the samey (the onion seemed to be primarily stuffed with onion so really it was just a baked onion or is a baked potato actually a baked stuffed potato) and a bit lacking in asparagus (3 small pieces only). It was also quite rich with the cream and parmesan. To me it needed a touch of acidity (a squeeze of lemon) to cut thought the richness of the cream and cheese sauce.

J and I thought the food was, on the whole, perfectly fine and a bit of a bargain at £9.95 for two decent size courses.

We were in an out in about an hour and we did not ask nor were we offered our drinks for free. A mild irritation was the inclusion of an “optional” service charge on the bill which I do find objectionable, but I would have tipped anyway as the service was fine so I let it go. This practice does, however, make me sometime feel like not tipping when otherwise I would and I wish restaurants would refrain from doing it.

At just under £26, including drinks and pre added “optional” service charge (grrrr), we both thought it was good value for what we got.

I am curious as to the experience of anyone who has tried/been able to take advantage of the 30 minutes in and out offer. Anyone who has, please add a comment as I would be interested to know.

Would I go back? Silly offer aside, yes I probably would.